The small Swiss family-run watch brand founded in the early 1930s looks back over its shoulder and revisits a model produced in the 1950s known as the Delbana Recordmaster. The 1950s and 1960s were the heydays for Delbana’s mechanical watches coinciding with the popularisation of Long Play records and turntables. Designed to celebrate the brand’s 90 years of independent watchmaking, the Recordmaster I appeared earlier this year. Using the name of the original 1950s model, the Recordmaster I pays tribute to the vinyl record complete with grooves on the black hour track. The second edition of the Recordmaster also plays the 1950s vintage card, but instead of celebrating the advent of the LP, it takes inspiration from the chrome record players (turntables) of yesteryear. True to Delbana’s philosophy of affordable prices, you can enjoy a straightforward daily beater with 1950s credentials without having to wait for an inheritance.

Delbana was founded in 1931 by Goliardo Della Balda in Grenchen. By 1940, Delbana had produced a popular and affordable bicompax chronograph and by the 1950s was producing over 100,000 watches a year with locally sourced ‘hammer-winding’ and ‘rotor-winding’ movements. In 1976 Delbana merged with WEGA watch company to ride the quartz wave, and in 2001, Delbana merged with Delma Watch Ltd. and relocated to Lengnau, Switzerland. Still run by a descendant of the founder, Delbana retains its reputation for affordable quality. 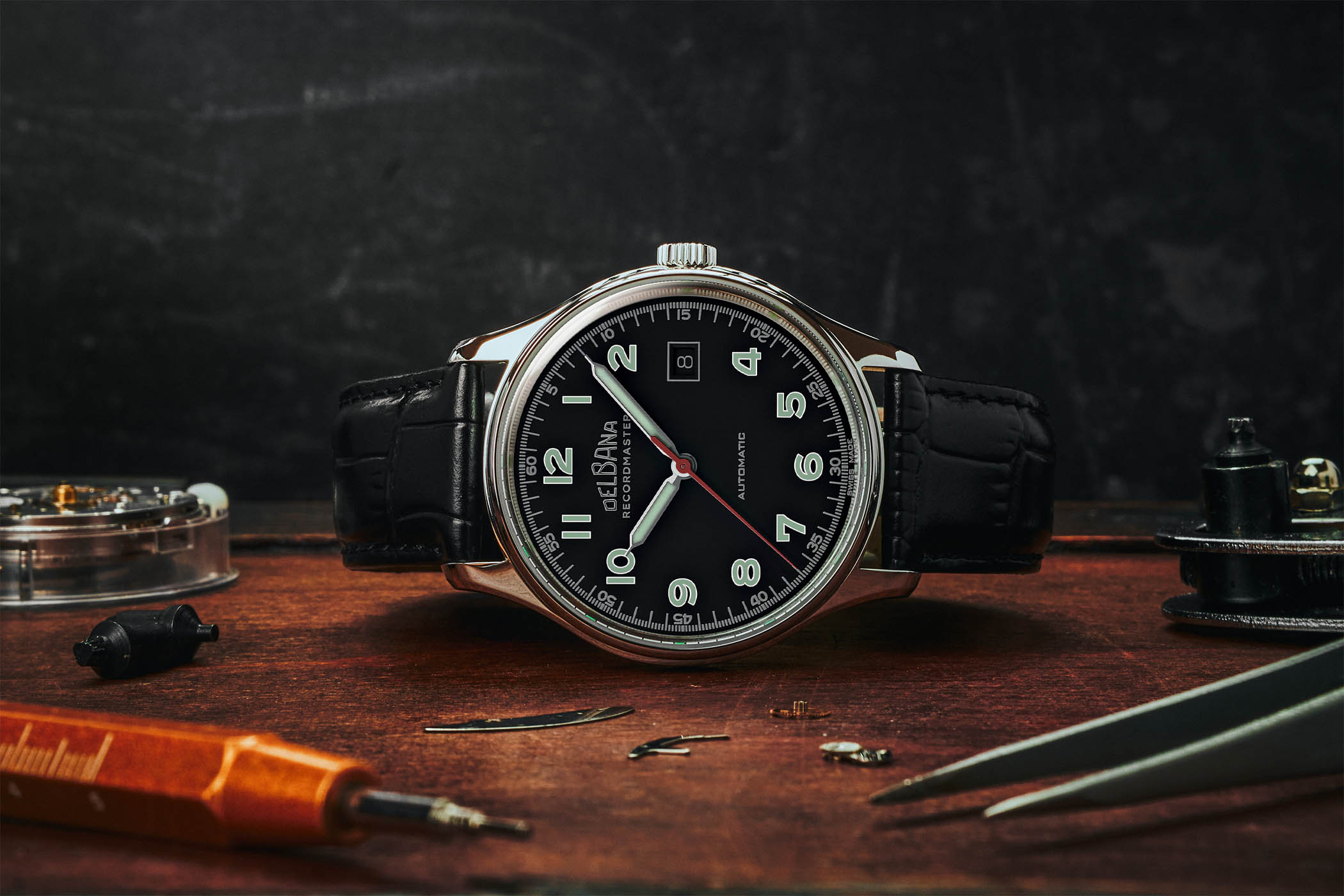 Inspired by the sleek black and chrome record players of the 1950s, the Recordmaster II comes in a polished steel case with a matte black dial. The 40mm case has a height of 11.5mm, a ridged crown with Delbana’s tower emblem and an exhibition caseback. In keeping with its 1950s mood, the bezel is thin, and the sapphire crystal over the dial is domed. The conspicuous large Arabic numerals are treated with bright green C7 Super-LumiNova with a contrasting white minutes track. The hour and minute hands, also treated with luminescence, are accompanied by a red central seconds hand. There is also a date window with a black background at 3 o’clock, and the brand logo at noon replicates the original font used on early Delbana watches. To complete the vintage vibe, the watch comes with a genuine black patent leather strap, a material often used on the sharp-pointed men’s Winklepickers of the 1950s popular among Teddy boys and rock and roll fans.

Delbana’s Recordmaster II watch is powered by the Sellita SW 200-1 automatic movement with a 38-hour power reserve. The reliable movement offers hours, minutes, seconds and date functions, performing at a rate of 28,800 vibrations per hour and comes with a customised Delbana rotor.

The Delbana Recordmaster II is limited to 90 pieces and is now available for pre-order with delivery from 15 June 2021. The retail price is CHF 750.

Introducing – Vanguart Watches, a New Indie Watchmaker and the Black...

Introducing – Vanguart Watches, a New Indie Watchmaker and the Black...