Following up on the release of the first Railmaster Co-Axial Master Chronometers last year (with anthracite or silver dials), Omega has introduced a denim blue version for 2018. Not much has changed in a year and a few cosmetic tweaks are the stars of the show, but they make a real difference in the overall look and feel. It may seem a bit like more of the same, but last year’s models were attractive and well priced with chronometer-certified movements, making them almost a bargain for what you were getting. The denim blue edition adds to the portfolio with a fresh coat of paint and new strap. Let’s take a closer look. 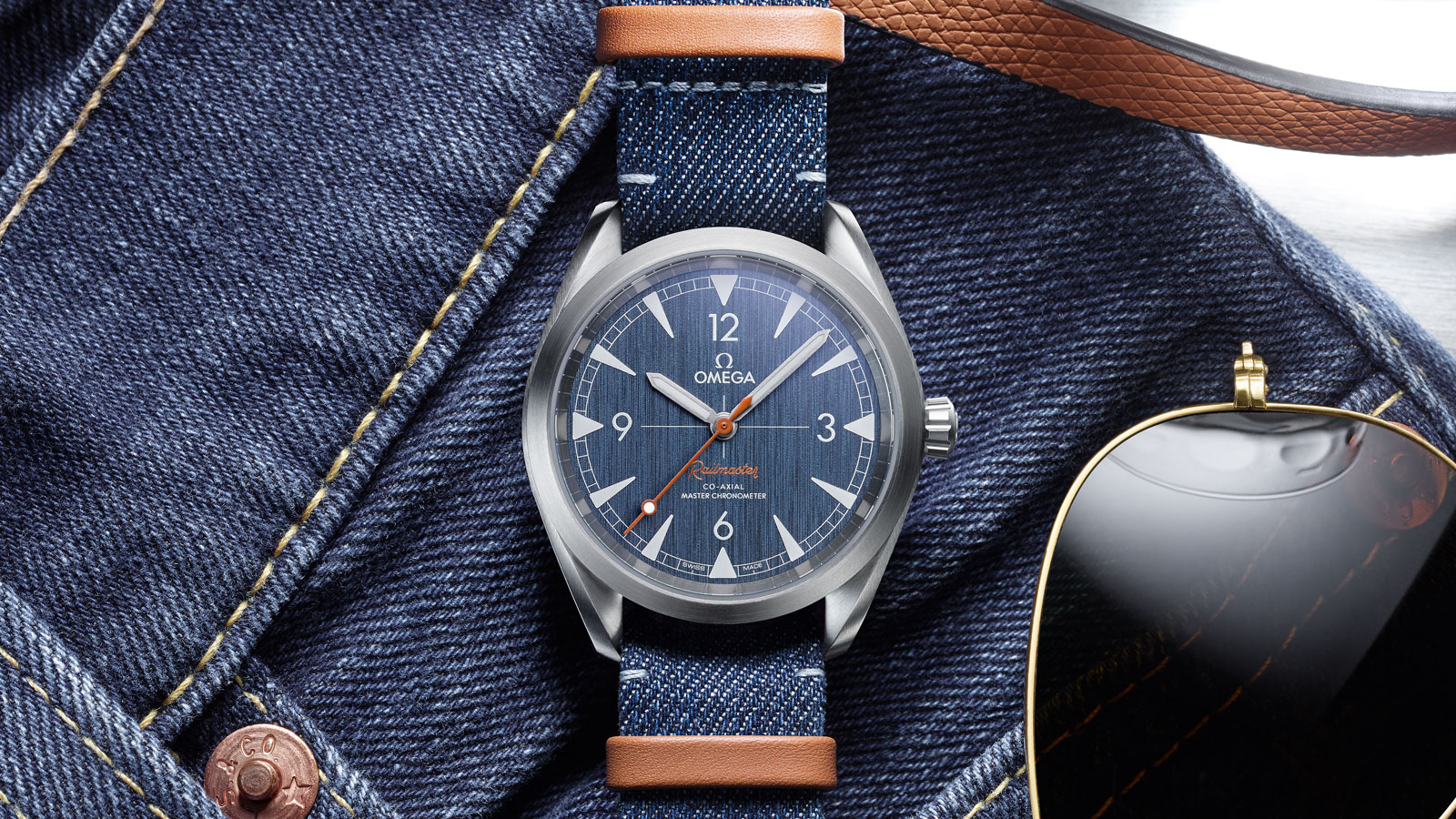 The all-brushed stainless steel case is still a very wearable 40mm in diameter (12.65mm in height) with a domed sapphire crystal that sports an anti-reflective coating on both sides. It has a screw-in crown and water-resistance to 150m, which isn’t groundbreaking, but enough to ensure a tight seal when swimming or casual diving. The steel case back has Omega’s NAIAD LOCK design that keeps the engraved wording perfectly upright, which is much appreciated, but unfortunately hides its highly-certified Master Chronometer movement.

The new denim blue dial has a vertically brushed pattern and resembles a pair of blue jeans. The overall aesthetic is the same as last year, other than the colour. The dial is steel, simple and unembellished. There are no complications or applied indices, leaving just triangular painted markers every five minutes and Arabic numerals at 12, 3, 6 and 9 o’clock.

The baton hour and minute hands, along with the indices, are filled with Super-LumiNova in light grey, which has a more contemporary feel than last year’s vintage tan. An orange lollipop central seconds hand also has its circle filled with light grey lume. A printed cross-hair in the center and “Railmaster” painted to match the seconds hand add enough flair to keep the dial interesting. 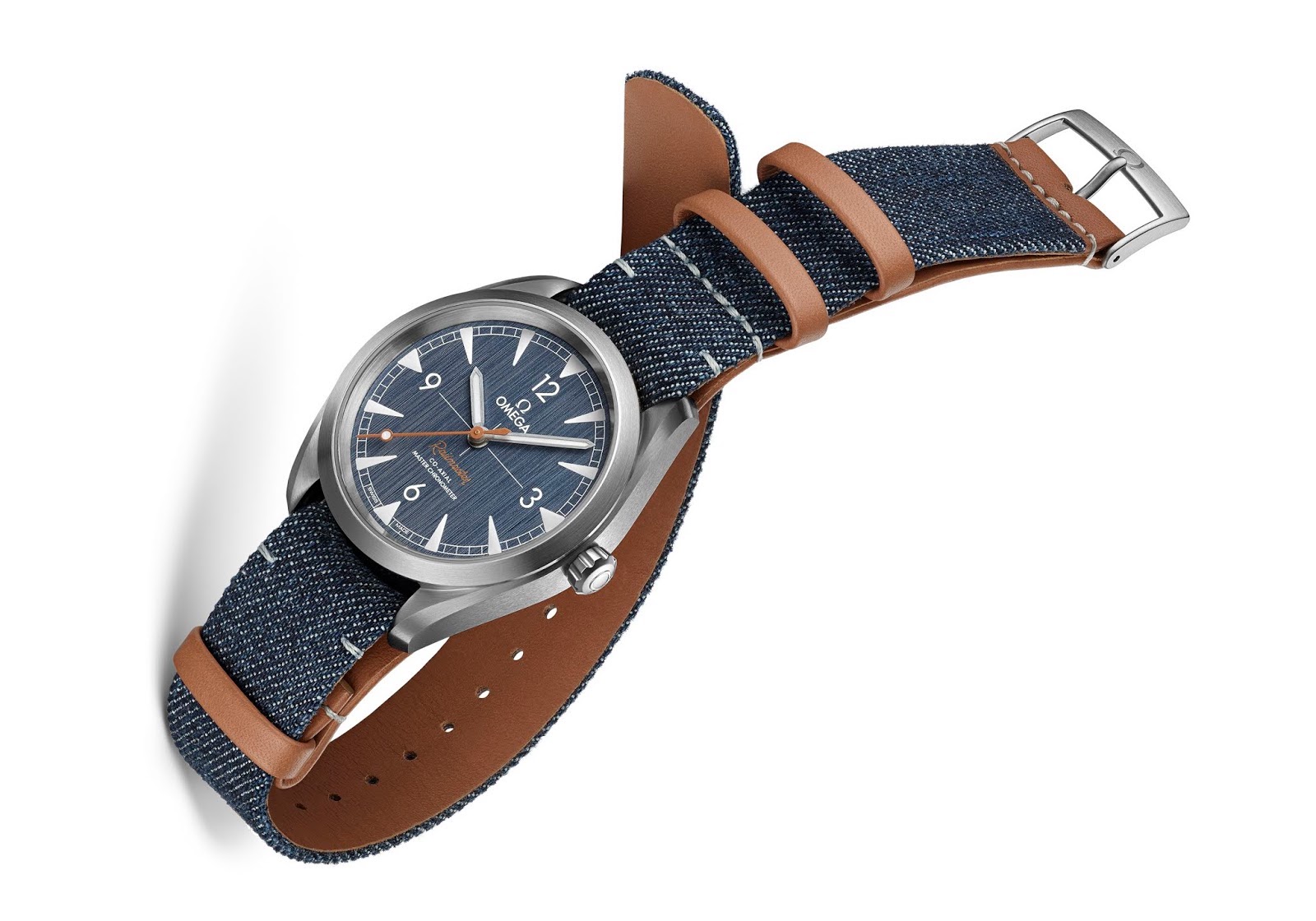 The movement is what really makes this series special. Beating inside is the Omega Calibre 8806, which boasts a magnetic field resistance of 15,000 gauss. It’s also a certified Master Chronometer, approved by METAS. The automatic movement has a Co-Axial escapement and free sprung-balance with silicon balance spring. It has 35 jewels, beats at 25,200vph, has a 55-hour power reserve (single barrel) with hours, minutes and central seconds. It’s rhodium-plated, and the rotor and bridges are decorated with Geneva waves in arabesque. The Calibre 8806 is a non-date version of the Omega Calibre 8800.

Last year’s Railmaster Co-Axial Master Chronometers were somewhat overshadowed by the 1957 Trilogy, but the series represents a way to get a Master Chronometer that’s both accessible and classic Omega. Two versions are available, one with a brushed stainless steel bracelet (EUR 4,600) and the other with a blue denim NATO strap (EUR 4,500). The steel bracelet adds only EUR 100 to the price and both offer substantial arguments for watches under EUR 5,000. More details at omegawatches.com.