Cartier’s famed Collection Privée Cartier Paris (CPCP) was the jeweller’s answer to the growing demand for men’s timepieces with high-quality mechanical calibres. Launched at SIHH in 1998, the CPCP was intended to showcase Cartier’s most iconic designs, including the Santos Dumont, Tortue, Tonneau, Tank Basculante, Tank Asymétrique and Cloche, among others. Due to lukewarm sales, the collection was phased out after a decade. Harking back to the CPCP, Cartier’s Collection Privé was quietly launched in 2017 and has, over the last four years, been used as a platform to release numbered and limited edition runs of Cartier’s iconic case shapes, starting with the Crash in the line’s inaugural year. The Crash was followed by the Tank Cintrée, the Tonneau, and the Asymétrique in the succeeding years. 2021 marks the Cloche’s turn in the spotlight.

The cloche shape (French for “bell”) made its first appearance in the house of Cartier as a diamond and onyx watch-brooch in 1920 and was so named because, when placed horizontally, its outline was reminiscent of a service bell one might find in a hotel lobby. The first cloche wristwatch, a diamond-set reference in platinum, was released in 1921. Between 1921 and 1970, Cartier created several Cloche models, but the Cloche remained a low-volume piece until it was relaunched as part of the Louis Cartier collection in 1984, this time as a quartz watch. The Cloche de Cartier made its next appearance in 1995 as a limited run of 200 pieces in yellow gold, with Arabic numerals, pomme hands, and a mechanical movement. These were the first Cloche de Cartier watches that could be both worn on the wrist and placed on a table for use as a desk clock. The last modern incarnation of the Cloche de Cartier was released in 2007, in a limited run of 100 pieces in yellow gold in the CPCP. The pomme hands from the last iteration were carried over, but the Arabic numerals of the previous iteration were swapped for Roman numerals, which are more closely associated with Cartier’s design language.

The new Cloche de Cartier preserves the iconic case shape from the 1920s and gives the dial a facelift for a more modern and refined look. The case measures a compact 37.15mm by 28.75mm – a traditional size for a classically styled men’s dress piece – and is finished almost entirely in high polish; only the case flank at 6 o’clock (the surface upon which to set the watch for use as a desk clock) and the caseback are brushed. Despite the asymmetrical case, the Cloche de Cartier has conventional lugs. The gold models have crowns set with a sapphire cabochon, whereas the platinum model’s crown is set with a ruby, as is traditionally the case for platinum Cartier watches.

Like previous Cartier Privé releases, the Cloche de Cartier will be available in three case metals: yellow gold, pink gold, and platinum, each in a numbered and limited edition of 100. The most opulent of the new Cloche models, the yellow gold reference comes outfitted with a golden-coloured dial with a fine radially brushed finish and blued steel sword hands. The minutes are delineated on a railroad track in black that traces the curvature of the case. Also in black, the hour numerals are pad-printed Roman numerals. The pink gold reference has the most contemporary aesthetic, with an anthracite grey sunburst dial and a white railroad minutes track. Matching the pink gold hands, the hour numerals are printed in matching metallic pink gold ink. 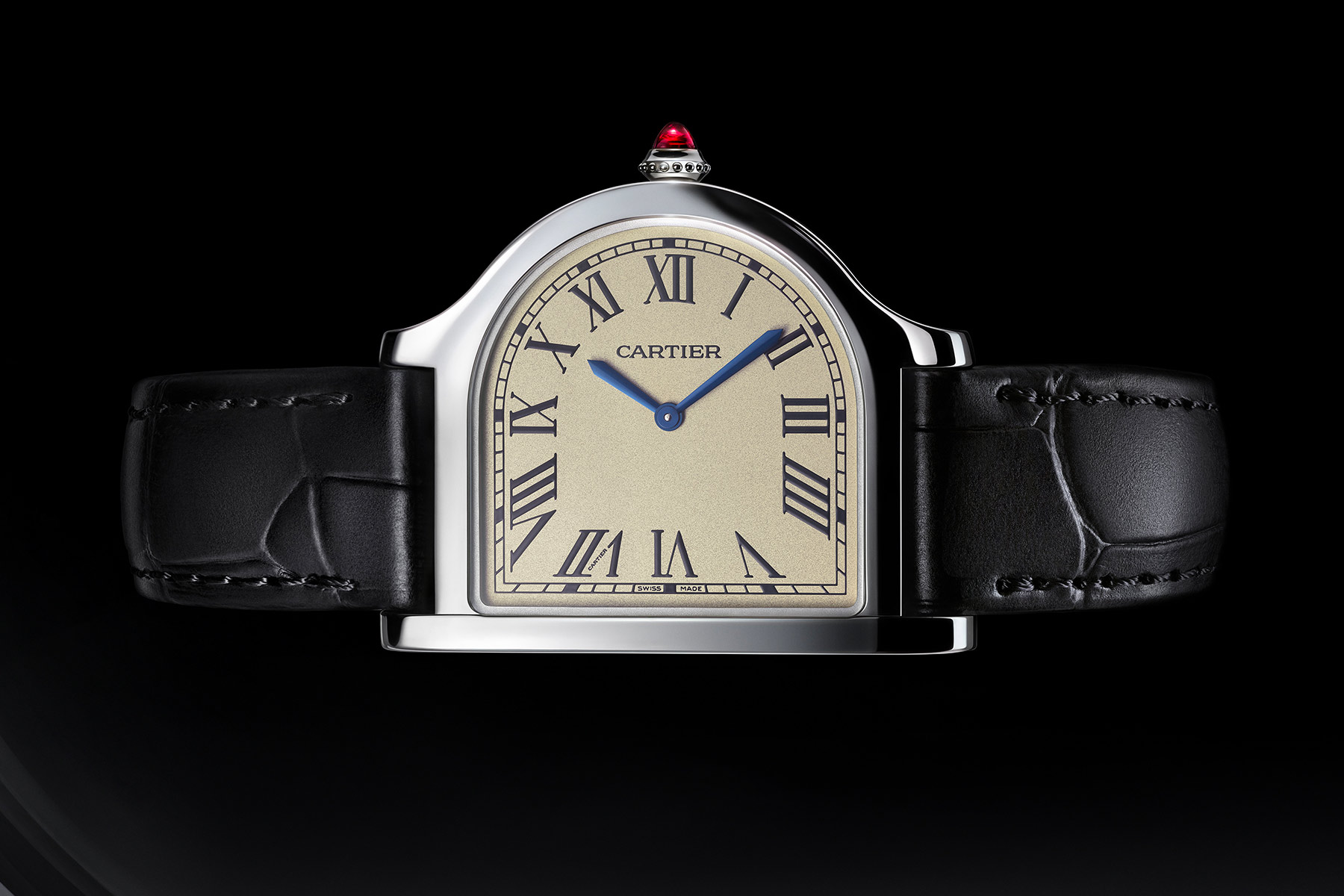 The platinum reference is the most understated and offers the greatest legibility of the three, with blued steel hands contrasting against a matte cream-coloured dial with black printing. All variants have the Cartier signature hidden in the Roman numeral seven. 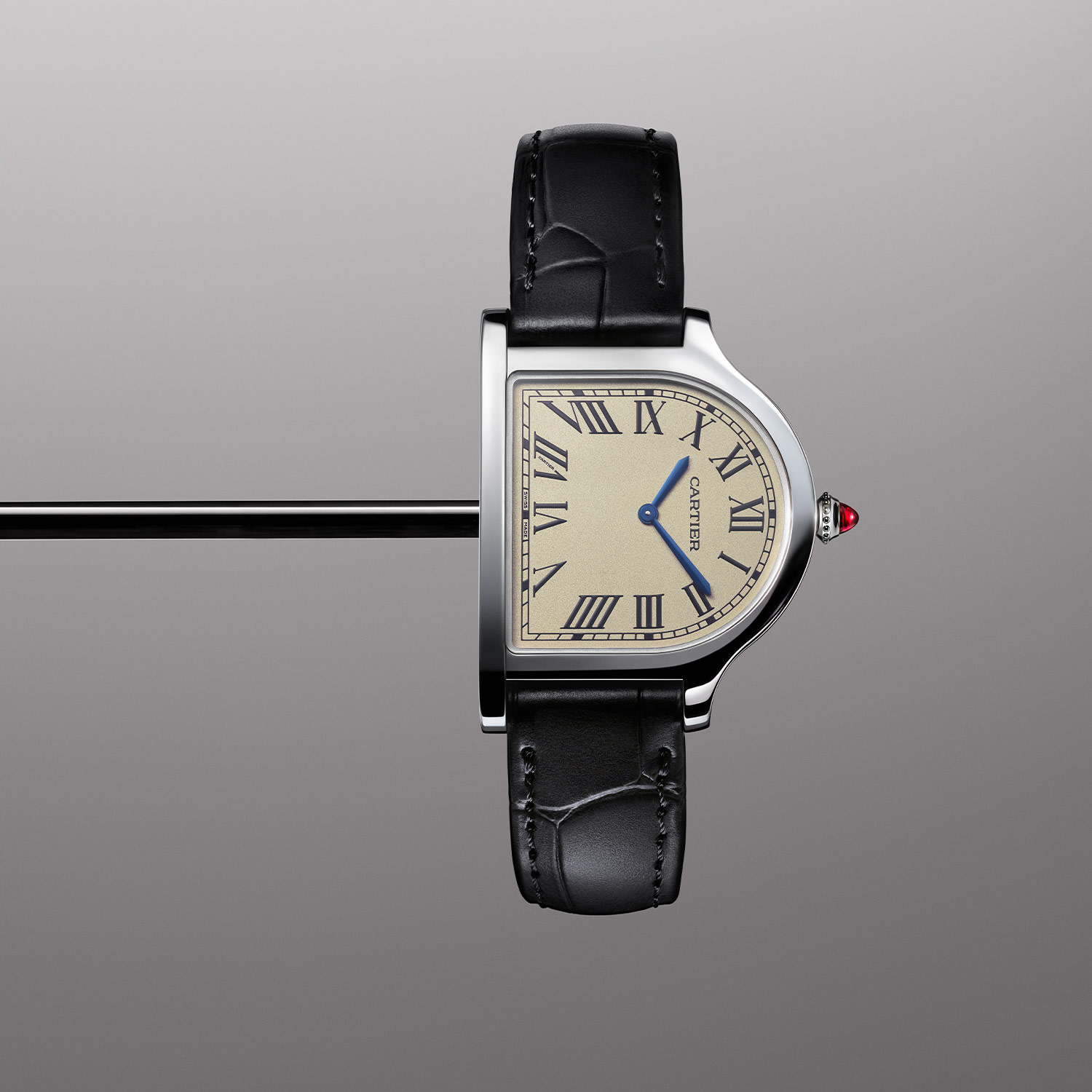 The case’s size and shape necessitate the use of the small and thin in-house calibre 1917 MC. A hand-wound movement that is only 2.9mm thick, the calibre 1917 was originally designed for ladies’ timepieces and is also found in the Cartier Privé Tank Asymétrique and the Cartier Privé Tonneau. The movement has a 38-hour power reserve and beats at a frequency of 21,600 vibrations per hour.

More details about the watches at cartier.com.