A watch resurrected from the past – well, fairly modernised too, for the best – the Chopard Alpine Eagle is the direct descendant of the slightly baroque St. Moritz model of the 1980s. We’ve seen the watch becoming an entire collection, with a tourbillon, an extra-large chronograph or a compact feminine version, as well as many colours or material combinations. And now, there’s a brand new and flamboyant model in the range, one that goes together with the original concept of the watch. The Midas touch, from head to toe, with the new yellow gold Chopard Alpine Eagle 41.

The Chopard Alpine Eagle is a true family affair. The predecessor of this watch, the 1980s St. Moritz watch (named after a high-end ski resort in Switzerland) was designed by Karl-Friedrich Scheufele when he was rather new to the company directed by his father – it was actually his first project. Of course, with the evolution of tastes, the concept of this sporty-chic, slightly baroque and flamboyant watch became out of style and the collection will be discontinued. Yet, on the insistence of Karl-Fritz (Karl-Friedrich’s son) and his grandfather Karl, Karl-Friedrich Scheufele decided in 2019 that it was time for Chopard to come back to the integrated sports watch market… And there was already a vessel in the brand’s archives for that, the St. Moritz. 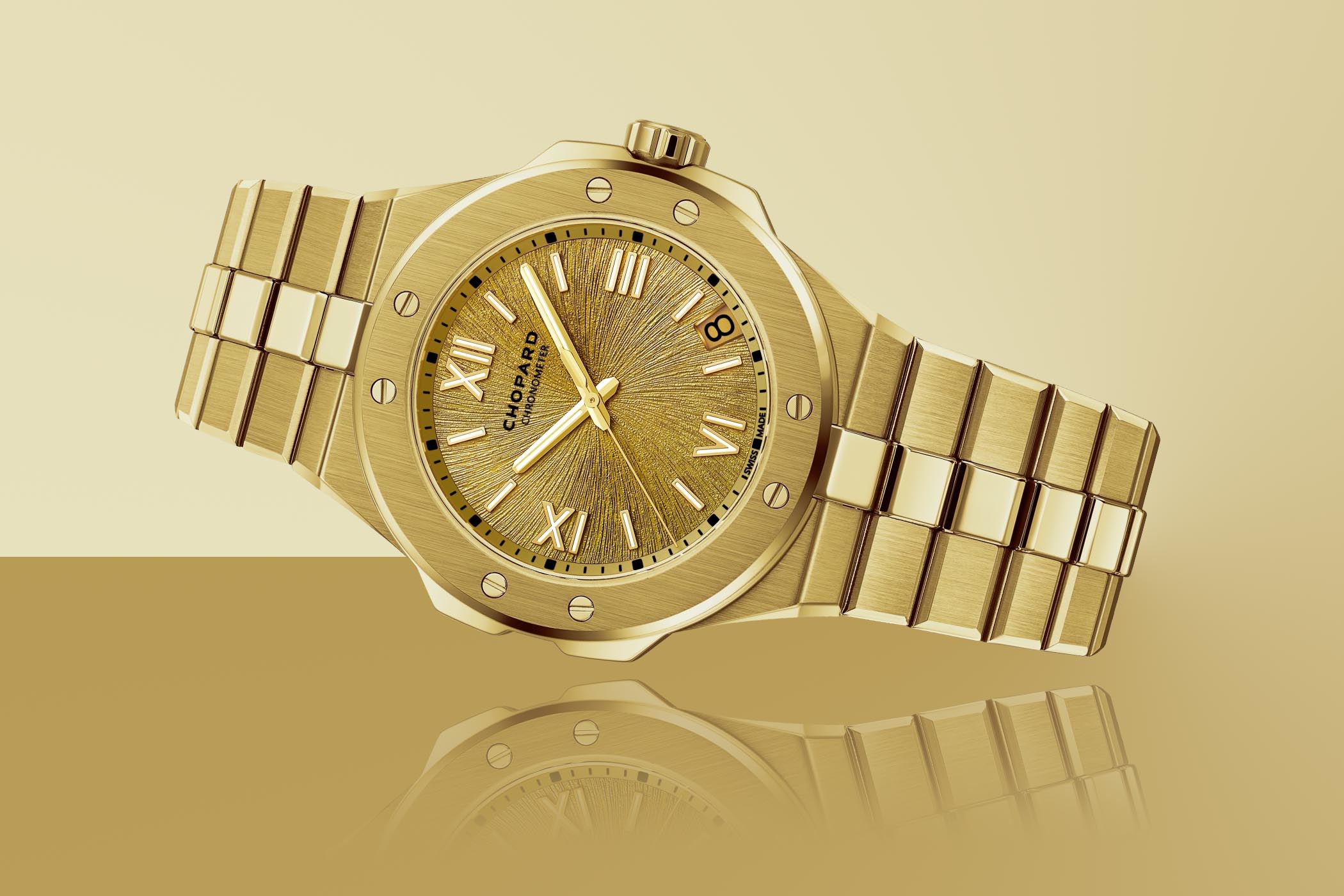 The Chopard Alpine Eagle was born from this inspiration, however, it’s also a highly modernized model with a contemporary approach. First introduced in Lucent Steel, it benefited from the overall popularity of luxury sports watches with an integrated bracelet. As such, the men’s version, the Alpine Eagle 41, has a tonneau-shaped case that is topped by a prominent bezel decorated with 8 screws, as well as distinctive crown guards on each side of the watch. The design is enhanced by the use of brushed surfaces and polished accents. The main evolution – and a very positive one – compared to the original St. Moritz is the shape of the bezel, which is round and doesn’t come anymore with notches around the screws. 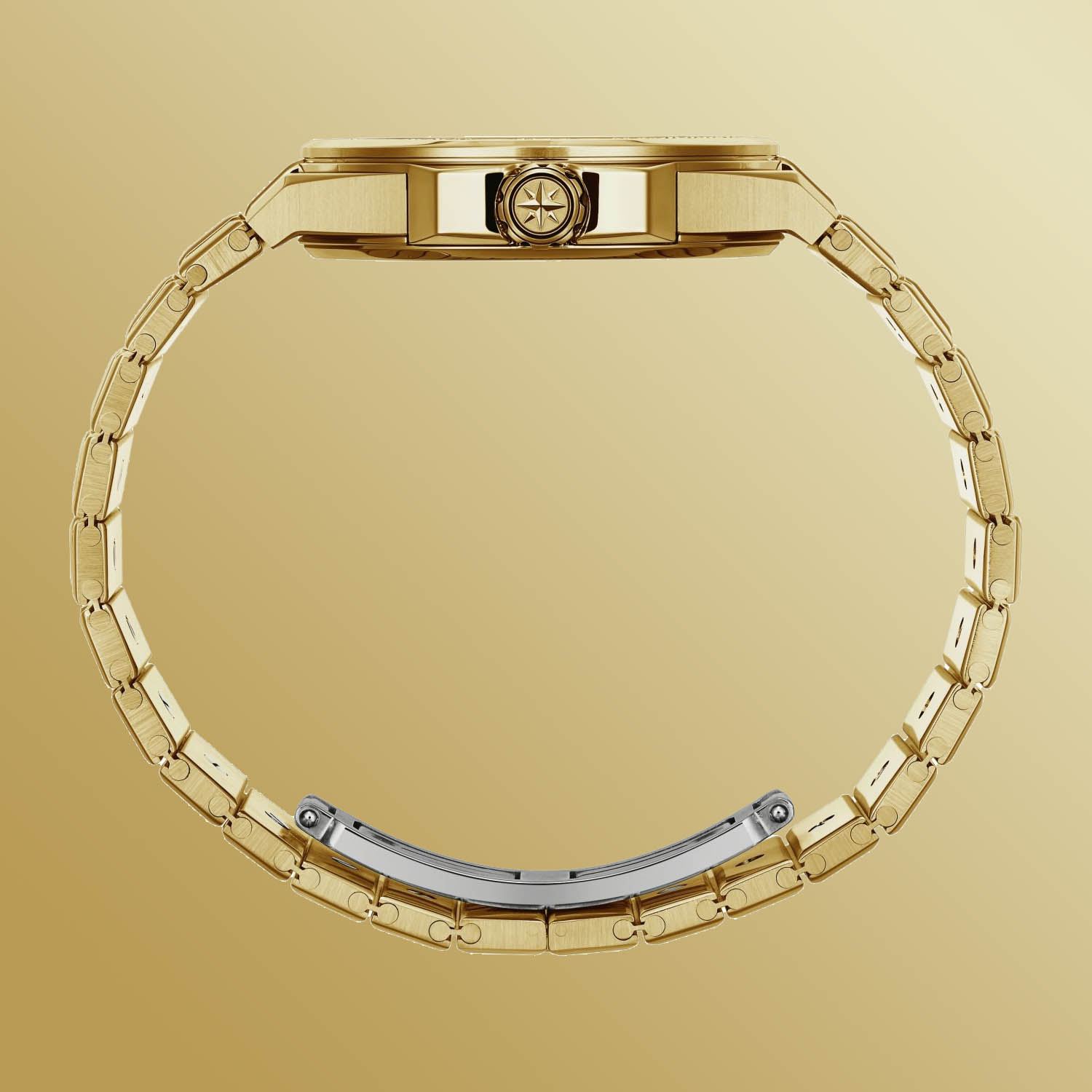 We’ve seen this watch already in 18k rose gold… But there’s something quite appealing with yellow gold, specifically when referring to a watch with undeniable 1980s inspiration – there isn’t a more apropos choice of metal, right? And it’s now there, with a case and a bracelet in this oddly cool, slightly retro look but a very contemporary take when it comes to the material itself since it’s made of ethically-sourced gold – it is one of the brand’s commitments to use 100% ethical gold. And all has been made to create a monochromatic watch, with all elements being made in gold, even the bezel’s screws.

The dial of the Alpine Eagle 41 is certainly its main attraction, with the texture being inspired by an eagle’s iris – a radial effect and a deep, irregular texture with lots of depth and details. To complement the colour of the case, the brand has here chosen to push the gold concept to the max, with a tone-on-tone colour, gold-coloured hands and applied markers and ever a gold-toned date disc. Not the most discreet choice, obviously, but one that makes an impact. 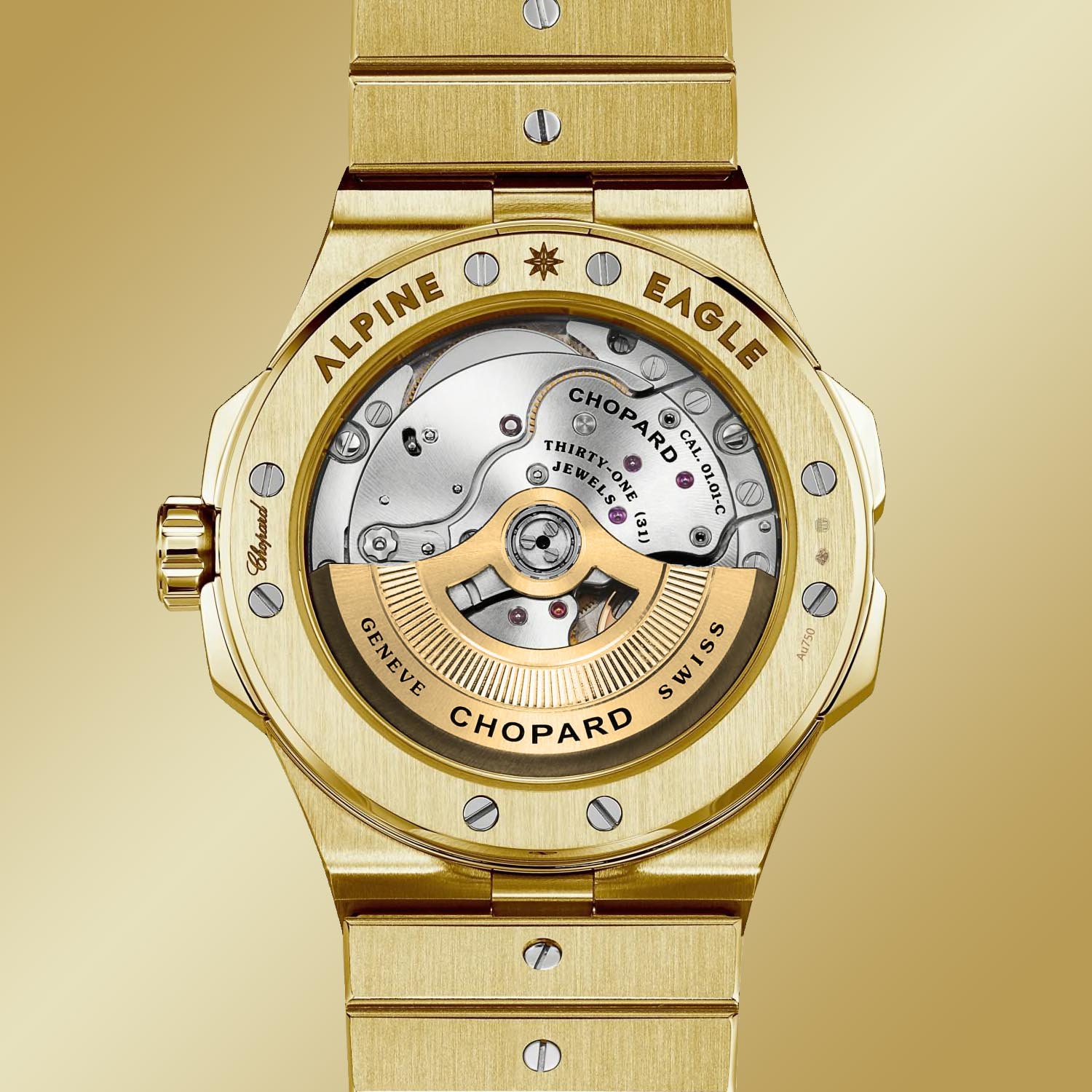 Inside the case is the brand’s in-house calibre 01.01-C, an automatic chronometer movement with a comfortable 60h power reserve. The movement is large, modern and finished with a combination of radially brushed bridges and polished bevels. It is wound by a 22k gold rotor that matches the case.

The new full-yellow gold Chopard Alpine Eagle 41 is a boutique exclusive that is priced at EUR 53,300. For more details, please visit www.chopard.com.