Swiss manufacturer Alpina, now owned by the Citizen Group alongside Frederique Constant, has a rich history. Founded in 1883, the brand made a name for itself with its robust tool watches under the name Alpina 4 and has also been the source of numerous patents and innovative calibres over the years. Today, the brand pays tribute to a vintage piece, but in a rather unusual way. We’re not specifically talking about a vintage-inspired watch, but something extremely rare: a vintage-inspired movement. Housed in the brand’s classic Startimer Pilot Heritage is a new manufacture calibre equipped with… a bumper winding system. Let’s take a closer look at this new and surprising model.

The comeback of the bumper movement

The bumper movement has been important in the development of the automatic watch. As you know, automatic watches primarily rely on an oscillating weight that rotates on top of the movement and, thanks to its inertia, transfers its energy to the movement’s barrel, which is later delivered to the regulating organ and creates the motion of the hands. Most automatic watches, if not all automatic watches, currently rely on a concept known as perpetual winding, where the movement is equipped with a rotor rotating 360 degrees, either in one or two directions. The reason for this unanimous choice is simply that it is the most efficient solution. But, in the old days of watchmaking, there was another way to make automatic movements.

In the past, Alpina and many other brands (Omega, for instance) have relied on “bumper” movements. Instead of turning 360 degrees like contemporary rotors, the bumper movement has an oscillating weight that turns 120 degrees. At either end of its trajectory, a small spring sends the mass back in the opposite direction and facilitates the winding of the movement. The concept was simple and effective but gradually phased out in favour of the full rotor. Today, such movements are extremely rare and virtually unknown. However, Alpina has decided to pay tribute to this cool concept, with its sixth manufacture calibre.

For once, a brand doesn’t pay tribute to the look of a watch but to its mechanics. Inside this new Alpina Startimer Pilot Heritage is a new manufacture calibre, developed from the automatic base movement used by Alpina and FC. What makes it unique is that Alpina has designed its key component, the rotor, in a 1950s style. The oscillating weight of this new watch and its ancestor share the same geometry and inspiration, yet with two drastic differences. 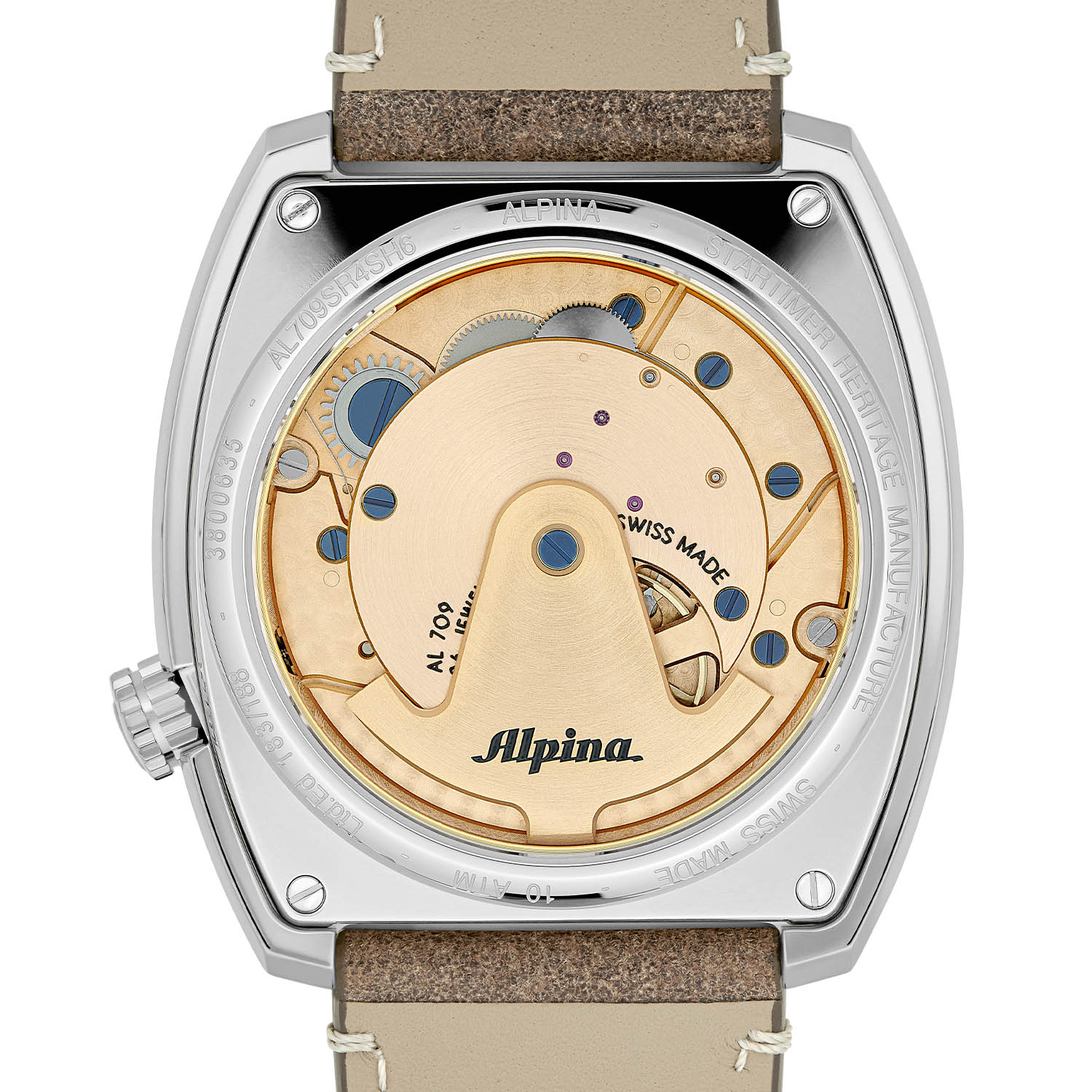 First, on the vintage model, the rotor rotates 120 degrees, while the new watch features an oscillating weight that rotates 330 degrees. Second, the rather sensitive, rudimentary springs of the original have been replaced by a blade for greater rotation. Through the transparent caseback, the look also pays homage to vintage watches with its gold-coloured movement (reminiscent of non-coated brass), with clean yet minimalist decoration. Overall, a pretty pleasant and very cool idea from Alpina.

To house this new movement in style, Alpina has chosen its most classic design, the Startimer Pilot Heritage, with its 42mm cushion-shaped case with a height of 13.25mm. The case, available either in natural steel or gold-plated steel, is finished with an attractive radial-brushed pattern. It is protected by a box-shaped sapphire crystal, features a crown at 4 o’clock and is water-resistant to 100m. With a clear focus on the mechanics, the  Alpina Startimer Pilot Heritage Manufacture displays a simple H-M-S dial without date highlighted with small touches of colour. The silver-coloured base is vertically brushed and features polished, rectangular applied indexes and hands. To bring some contrast and life, all the elements are filled with red luminescent material. Depending on the colour of the case, the dial’s elements are either silver-coloured or gold-plated. The Alpina Startimer Pilot Heritage Manufacture with bumper movement is worn on a brown calf leather strap with off-white stitching. Each version will be limited to 188 pieces, now available from the brand’s website. The natural steel model is priced at EUR 2,850, and the gold-plated model at EUR 2,950.