Last year, Girard-Perregaux, announced a revamped, limited edition Laureato timepiece as part of its 225th Anniversary celebrations. The response to that timepiece was very positive, and so at the beginning of this year, the Swiss manufacture followed up with an entire new Laureato collection (which we spent a bit of time getting hands-on with at SIHH.) Now, another new model is joining the line-up. Meet the very stealth-looking, all-black everything, Laureato 42 mm Ceramic.

By now, I’m sure you’re already familiar with the history of the Laureato collection. Launched in 1975, after AP’s Royal Oak had firmly established that the luxury sports watch was a ‘thing’, it was not designed by Gerald Genta (the man of the hour in that era), although it did look somewhat like Genta’s other creations with its octagonal polished bezel and integrated bracelet. Although to be fair, so did most competitor models from that era. Still, the Laureato stood apart from its peers for other reasons.

Some examples of the previous Laureato Collections, with the 1975 version on the left, and some later editions on the right

For a start, it was offered in a two-tone – gold and steel – case, as opposed to the all-steel designs generally seen elsewhere. Plus, its name was not inspired by sports or sailing, but rather was suggested by Girard-Perregaux’s Italian distributor at the time and inspired by the classic movie, The Graduate (Il Laureato in Italian). Finally, it was equipped with the manufacturer’s new ground-breaking quartz movement – one of the first serially produced Swiss quartz movements – instead of a thin mechanical movement like those of its rivals. This was truly a watch for the modern, 20th-Century man.

Over the ensuing decades, GP continued to refine the Laureato collection. In 1984, the first mechanical movements with complications began to appear. In 1995, Girard Perregaux re-designed the Laureato to house the newly developed in-house Calibre 3100 – which required larger dimensions but also resulted in a slimmer profile. Finally, in 2003, Girard Perregaux launched the Laureato EVO 3, a large sport-watch, with a 44mm case and integration of rubber in-between the case and the bezel (reminiscent of the ROO). It was also available with chronograph or the complicated edition of the GP 3300, with moon, small second, power reserve and large date. Finally, GP launched the Laureato Tourbillon with three Bridges, with a transparent look due to the sapphire bridges. 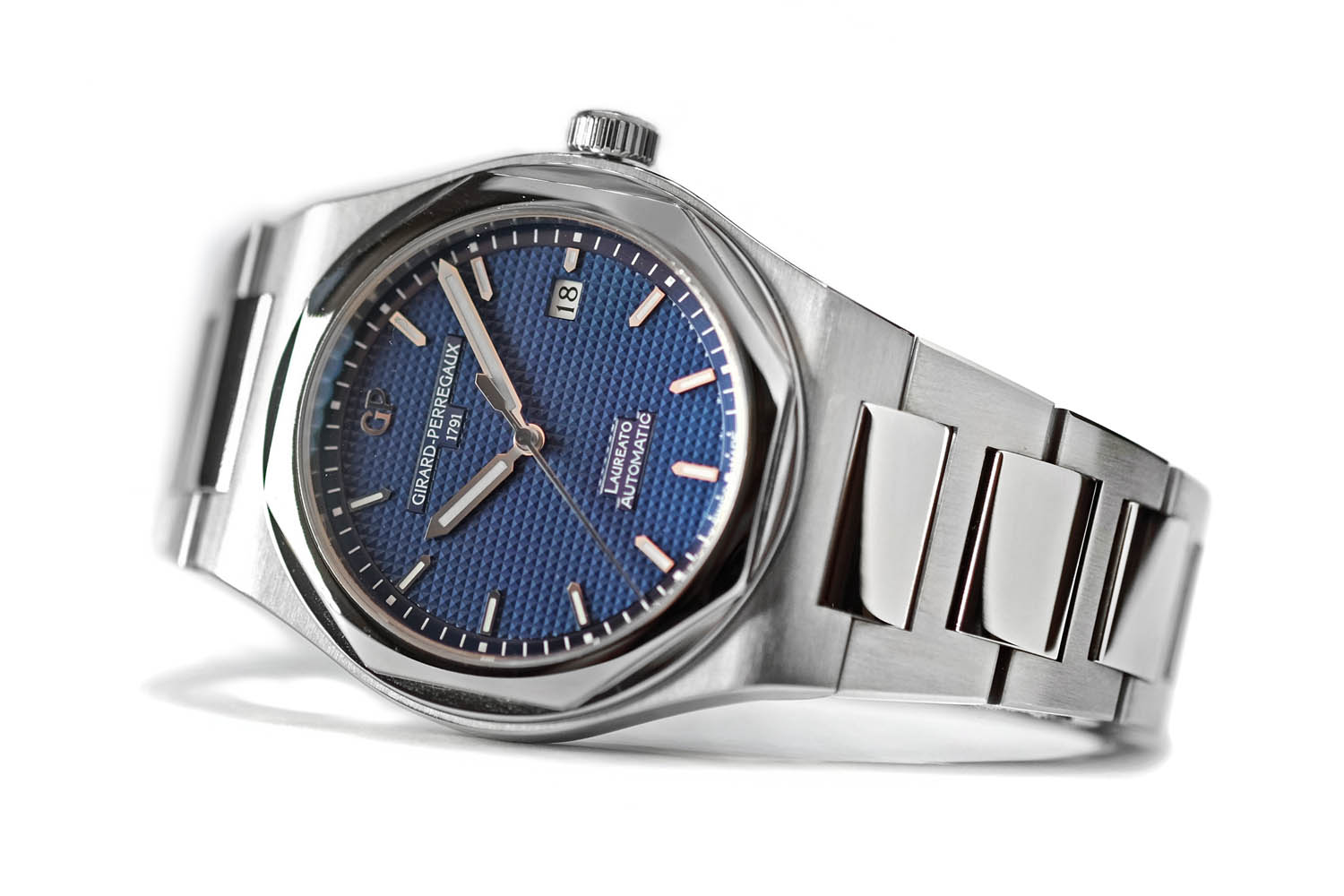 The revival of the Laureato, with a 225 piece limited edition in 2016 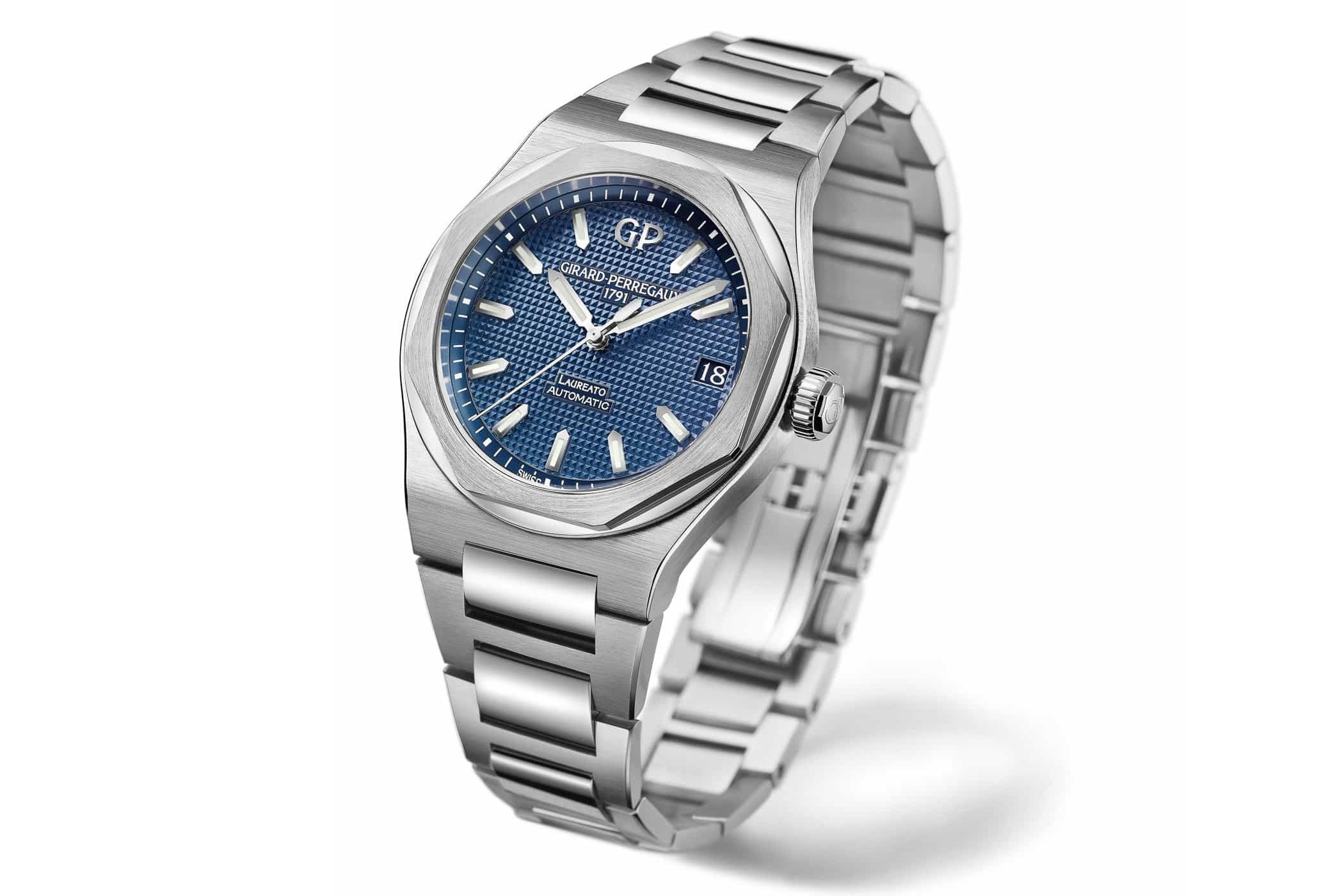 The 2017 version of the Laureato, here in 42mm steel with blue dial

Then, things went quiet for over a decade until the revival of the Laureato in 2016. This watch, introduced for the 225th anniversary of the brand, was a vintage-inspired piece (at least for the shape), yet modernly sized and powered by a mechanical movement (the 1975 version was quartz). Yet, the proper comeback of the Laureato, as a full, standard collection, happened at the SIHH 2017, with a complete range of watches: 42mm, 38mm, 34mm diameters, in steel, in two-tone, in titanium or in gold, with time-and-date movement, with tourbillon, with skeletonized calibre. And with a price much more aggressive than the 225-piece limited edition – you can discover the collection in our article here.

Over the years, Laureato models have been made available in a range of different materials, with the current collection featuring cases made from titanium, steel and a titanium/pink gold combination. Never in the collection’s history, however, has ceramic been used. The new Laureato 42mm Ceramic changes all of that. Presented in an all-black, ceramic case with contrasting polished and satin-brushed surfaces, it gives the term “luxury sports watch” a whole new meaning. 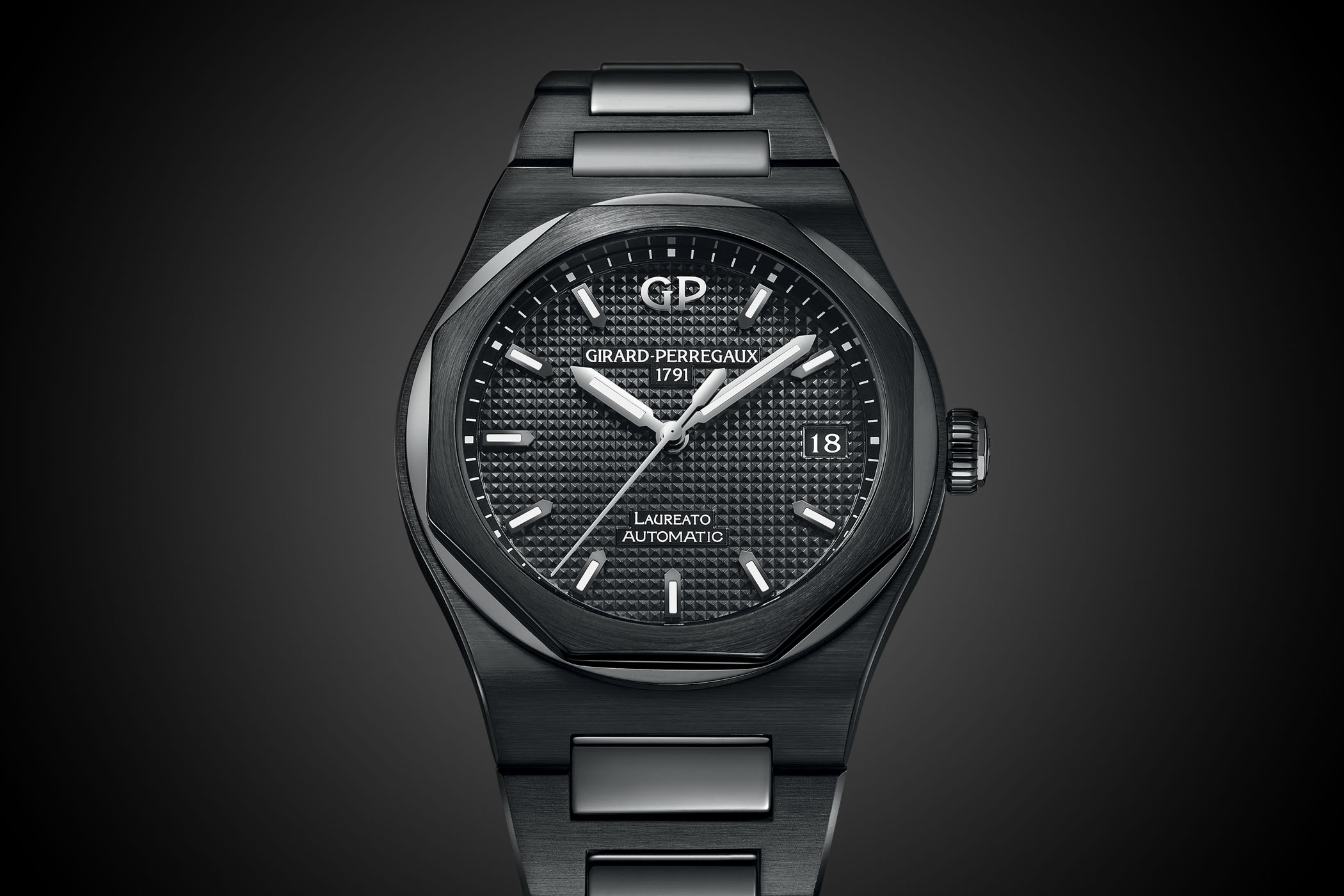 Just about every surface on this watch that could be black, is black, with the exception of the baton-type steel hands, which are filled with white luminescent material. The black dial features the familiar “Clou de Paris” hobnail motif and contrasts nicely with the hour indices and minute chapter ring, with the former also filled with luminescent material. A subtle but very much appreciated touch is the black disc for the date with white numerals. If the inverse formation had been used it would have completely ruined the overall look of the watch.

Equally as nice is the black ceramic, integrated bracelet, complete with ceramic triple-blade folding clasp. I really like how the polished interlinks contrast again the more understated look of the satin-brushed bracelet. Again, it’s a subtle touch but it really adds a lot to the overall design, giving an otherwise very sombre aesthetic a lot of personality. I haven’t worn one myself, so I can’t comment as to how it would feel on the wrist but GP claims it is exceptionally supple and very comfortable. 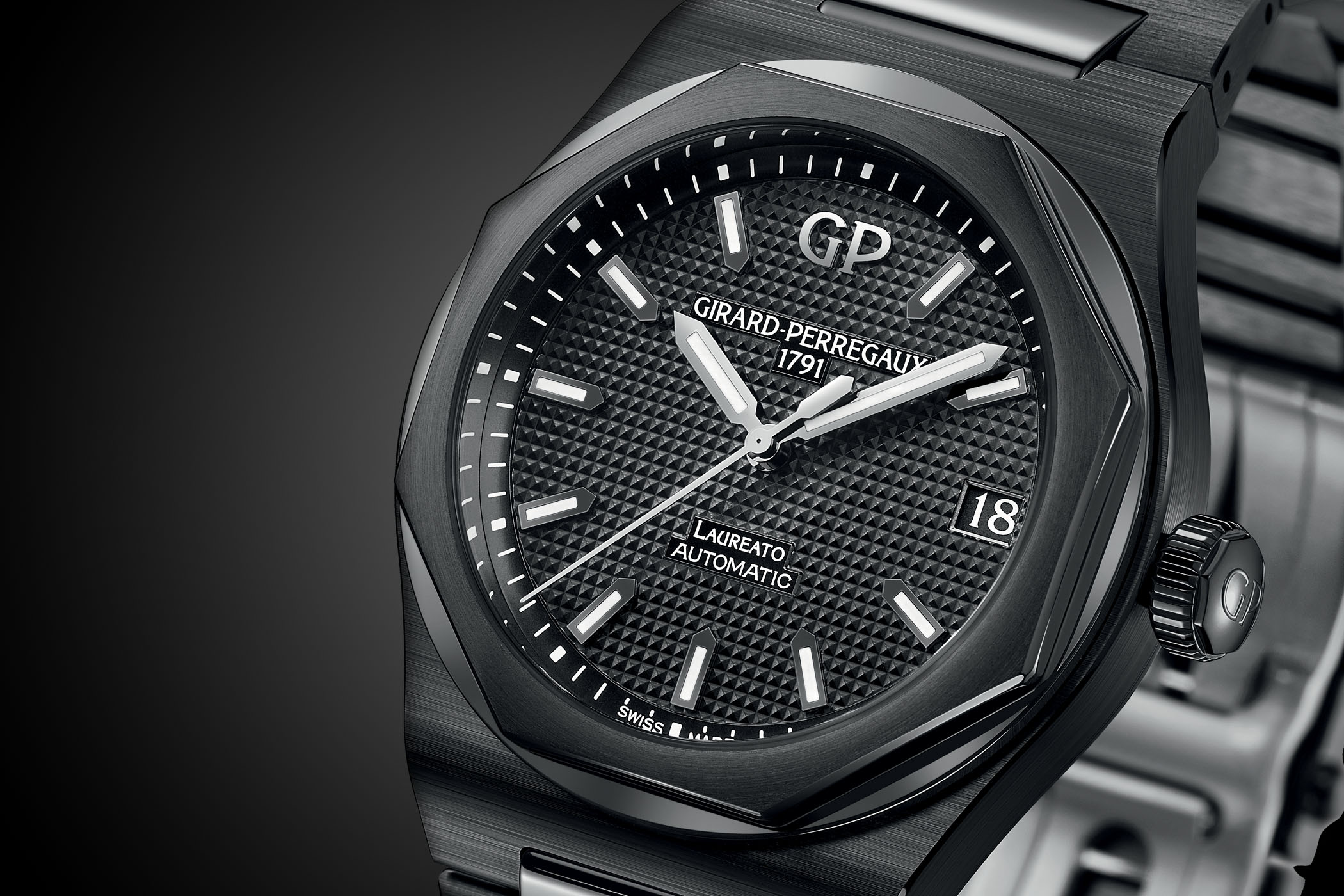 Inside the case is the in-house, self-winding GP01800-0025 movement, which beats at a steady 4hz and offers a max power reserve of 54 hours. Functionality is limited to time and date only. The movement, which has been nicely finished, fills out the case well and is visible through a smoked sapphire case-back.

Admittedly, the stealth look of the new Girard-Perregaux Laureato 42mm Ceramic won’t suit all tastes, especially those who prefer something a little more traditional. Still, I must admit that I am really taken by this all-black look and I think GP is doing a good job of showing the versatility of the Laureato collection. Plus, they’ve created an all-black watch that is still highly legible, which is no mean feat. Overall, I think this is another step in the right direction for a brand that is slowly but surely rebuilding its position in the market. For more information, please visit: www.girard-perregaux.com. 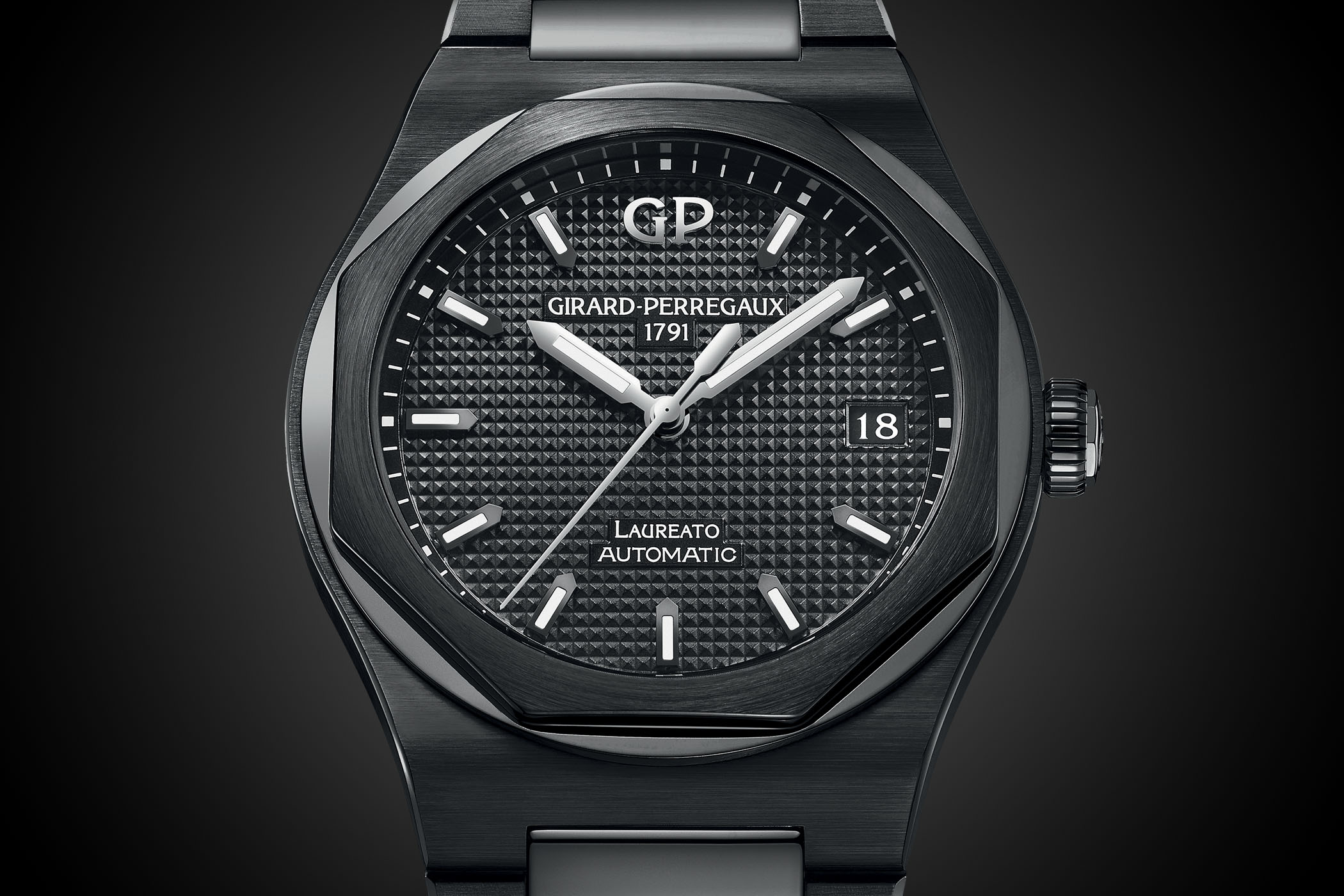