Introducing – The A. Lange & Söhne Zeitwerk Honeygold Lumen, and Its New Powerful Movement

If A. Lange & Söhne watches are often playing on classical design cues, there is one sub-collection that certainly has a far more modern and technical vibe, and that is the so-called Lumen range of limited editions. Born in 2010 with the Zeitwerk Luminous (not yet named Lumen back then), the collection has grown to become some of the most sought-after and desirable watches in the brand’s portfolio. Rare and exclusive, these models with sapphire dials are proper treats for collectors. And they’ll be happy to know that a new one is launching today, and it comes back to the roots as based on the architectural watch with jumping indications… But as you’ll see, this new Zeitwerk Honeygold Lumen comes with many new features, starting with an unprecedented movement that packs a lot of power. And, it’s also the first Lumen not to be made out of platinum…

Behind the Luminous/Lumen collection, there’s a rather fun story. Anthony de Haas, Director of Product Development of the brand, while wearing an early version of the platinum Zeitwerk found that reading the time in the dark was rather difficult. So his team and he started to explore how to give this modern-looking watch better night-time legibility… And once the discs were given luminous numerals came the idea to actually show them (and some of the movement’s technicality) by adding a partially-tinted sapphire dial that, however, was rather special since it let UV pass through in order to charge the luminescence of the numerals. And this is how the Luminous/Lumen series started.

Back then not named Lumen (it came with the second watch), the first watch of the series was the Zeitwerk Luminous, based on the classic edition launched in 2009, winner of GPHG. This watch, with the ref. 140.035, was made of platinum and had a dark-tinted sapphire dial, which let the discs with luminous indications appear underneath and partially revealed some of the technical parts of the movement. It was a 100 pieces limited edition. Otherwise identical to the classic Zeitwerk, with jumping hours on one disc on the left, and jumping minutes on two discs on the right. The movement is almost identical to the classic Zeitwerk models, the hand-wound calibre L043.3 with 2.5Hz frequency and 36-hour power reserve, with patented one-minute remontoire mechanism. 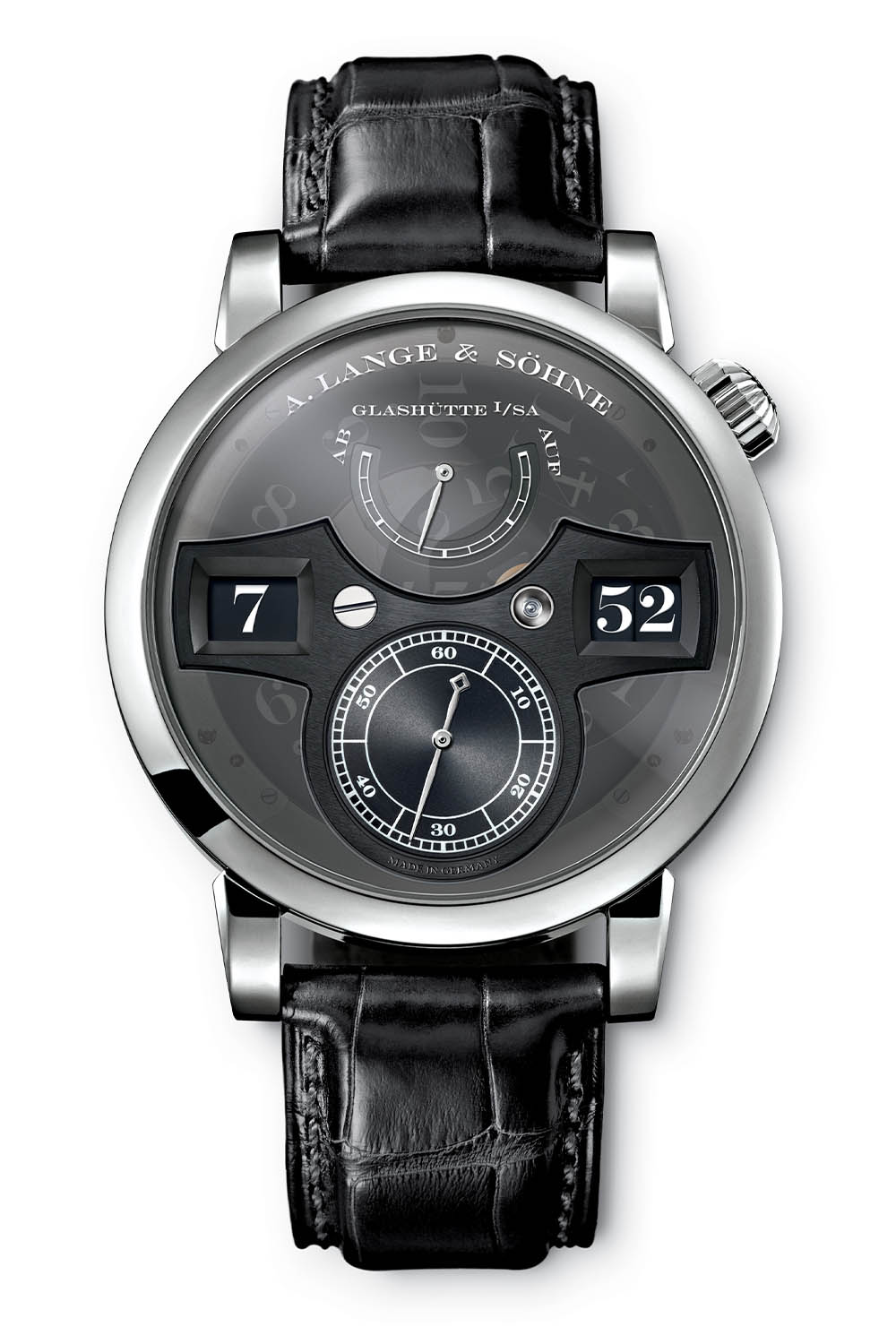 Following the Zeitwerk, the brand presents in 2013 a second Lumen watch based on the Grand Lange 1, in order to show the classic Lange oversized Date feature in all glory, visible on through the aperture at 2 o’clock but also under the partially-tinted sapphire dial. This 41mm watch, reference 117.035, is a 200-piece limited edition and is made of platinum. All indications are luminous (hours/minutes, all hour markers, small seconds, power reserve and of course the large date). Inside is the hand-wound calibre L095.2, with 72h power reserve and the same mechanical base as a classic, closed-dial Grand Lange 1. 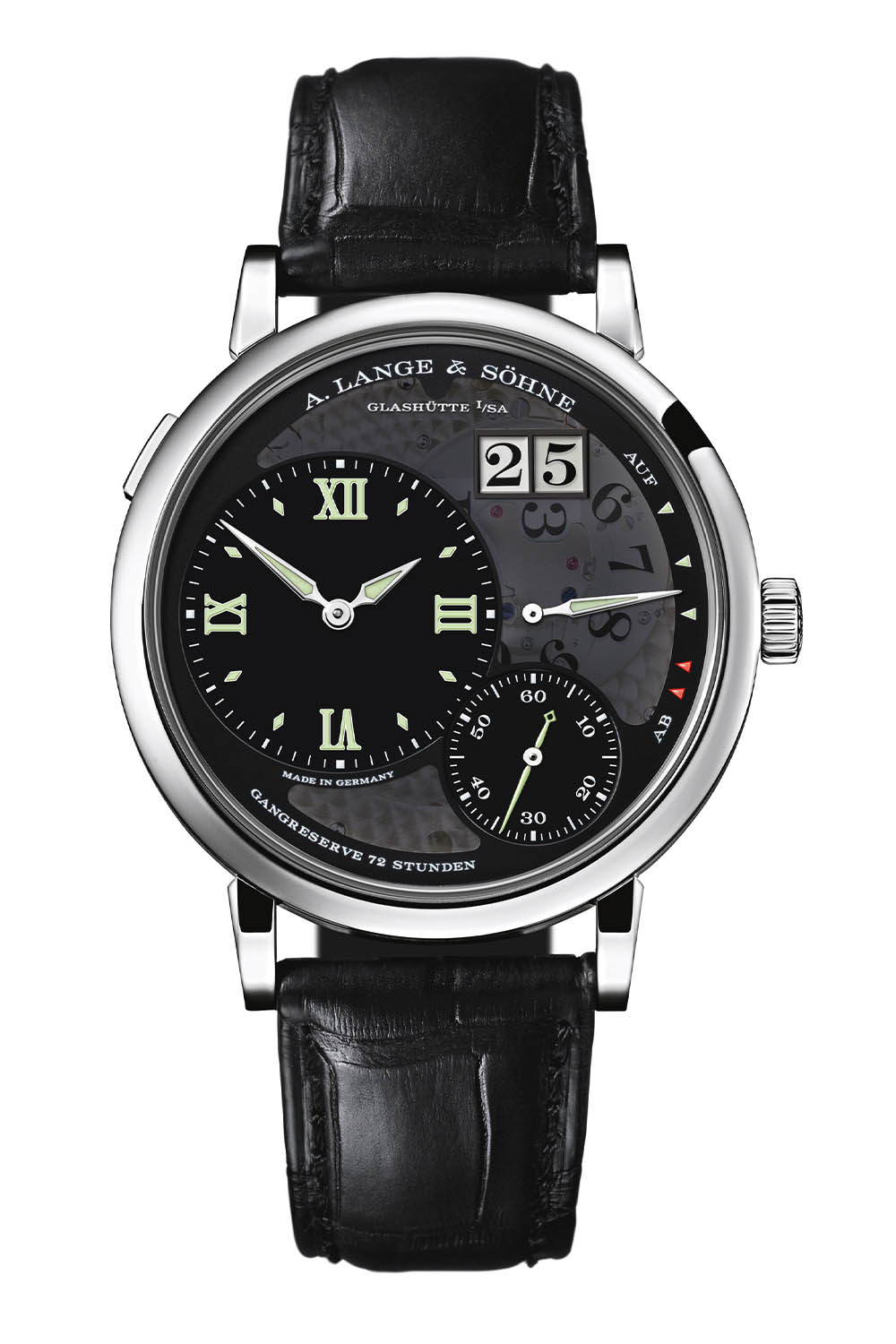 This model introduced in 2016 under the reference 139.035 was also limited to 200 pieces, was also in platinum and also measured 41mm in diameter. It was an evolution of the concept launched with the 2013 edition, yet here the star of the show was the luminous moon phase indication integrated within the hours/minutes off-centred dial. Just like the previous Grand Lange 1 Lumen, all indications, including the Oversized Date, are coated with luminous material, and some of the indications are thus visible under the partially tinted sapphire dial (mostly the date discs). The moon disc is adorned with a multitude of small luminous stars. Inside the case is the hand-wound calibre L095.4, yet again with a 72h power reserve and the same base as the classic Grand Lange Moon Phase (non-lumen). 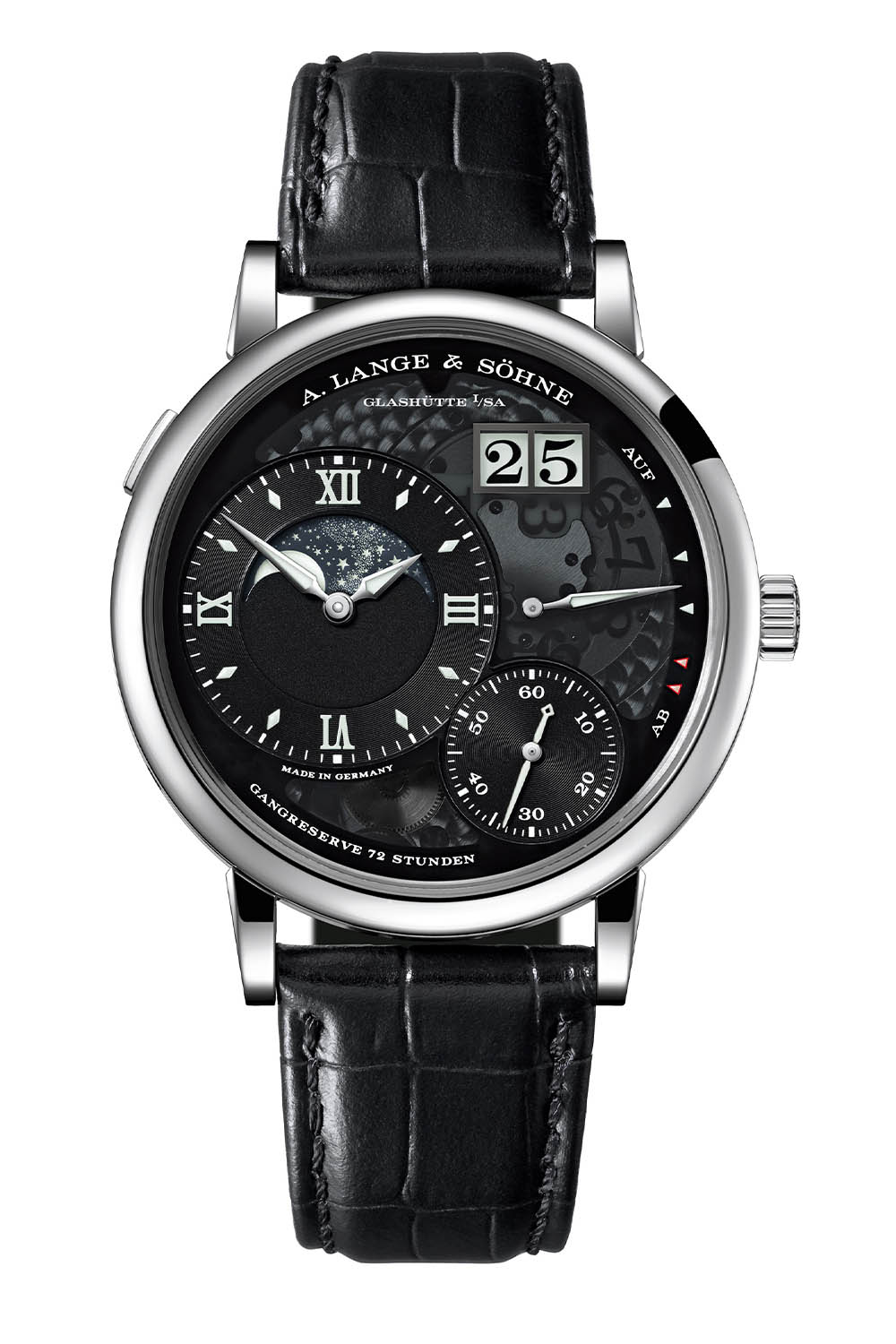 Following the 3 previous watches, Lange launched in 2018 a new Lumen limited edition of 200 pieces, once again made of platinum, but this time based on its most famous chronograph watch, the Datograph. The idea here with this reference 405.034, once again playing with a partially tinted sapphire dial, was to emphasize the two major complications of this model, by partially revealing the mechanics behind the oversized date, and also by making the chronograph function highly visible in the dark, as the sub-dials and the tachymeter ring were coated in luminous material. The sapphire dial also allows a view on the top side of the movement. Finally, the Up/Down power reserve function is also highlighted in luminous material. The platinum case still measures 41mm in diameter and the movement remains the same as the updated version of the Datograph, with a 60h power reserve. Hands and some of the baton hour markers are luminous too. 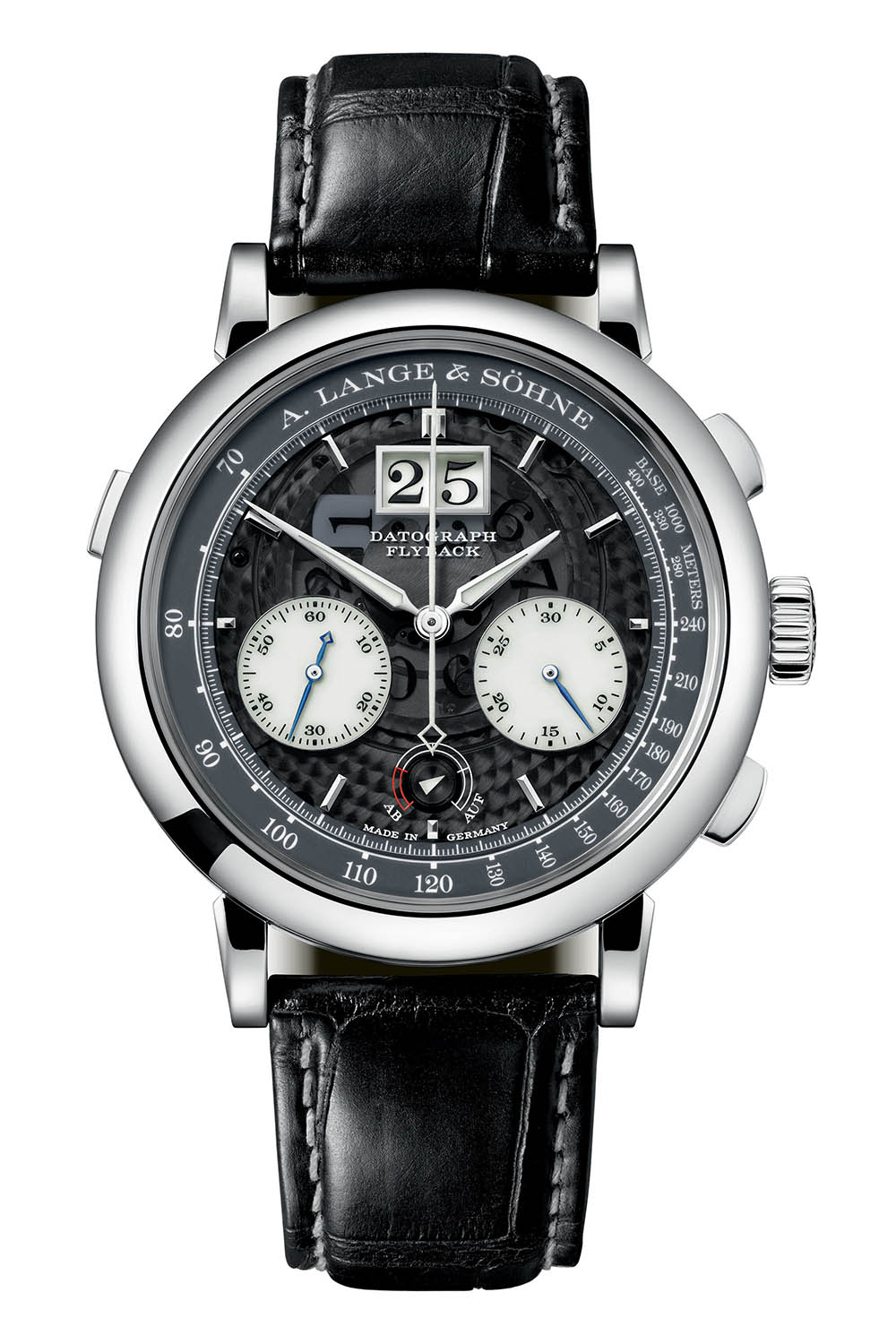 At first sight, you might imagine that this new Zeitwerk Lumen is basically the same as the 2010 model, in a different material… You’d be right to think so after just a quick look at the watch and its specs. It shares the same emblematic display – inspired by the five-minute clock in Dresden’s Semper Opera – as well as the same T-shaped time bridge and the exact same case dimensions as all the classic (understand time-only) Zeitwerk, Luminous or not. But, in reality, this new Zeitwerk Honeygold Lumen is an entirely new watch, with different proportions, a revised dial with different construction and a new movement with far more power than before… And it’s also one with unprecedented material for the Lumen series. So, all in all, there’s quite a lot to explain. 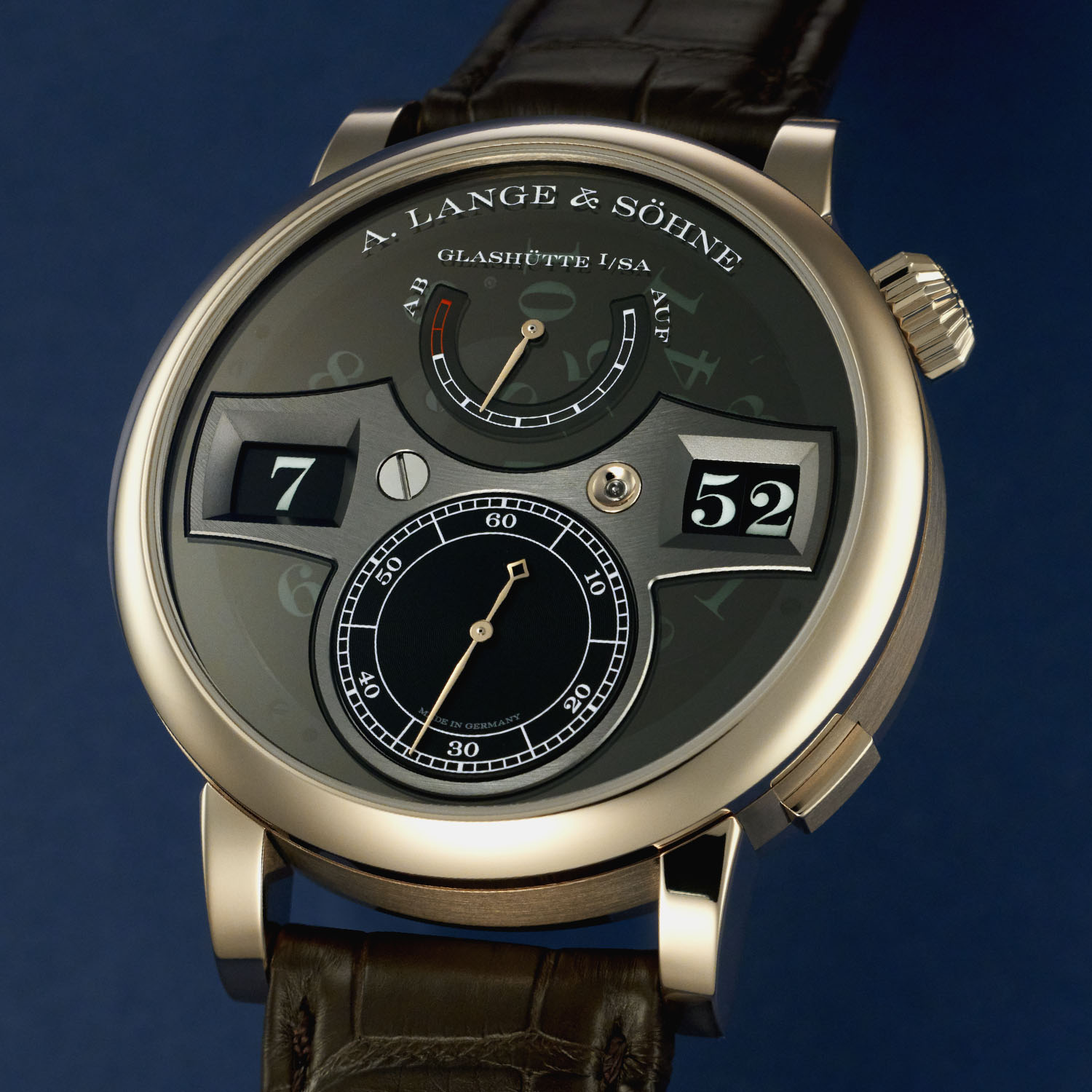 First, the case. Yes, the diameter is still 41.9mm and the height is still 12.6mm, just like the previous editions of the time-only Zeitwerk watches. But, due to the new movement and a revised display – more on that later – the case has different proportions. First, the bezel is now slightly thinner than before, making the watch visually a bit less bulky. And because A. Lange & Söhne is all about respecting some ancient rules of proportions, the lugs have also been revised to be sleeker. We’re talking minor adjustments here, of course, but some that could give the Zeitwerk Honeygold Lumen a bit more elegance than before on the wrist. 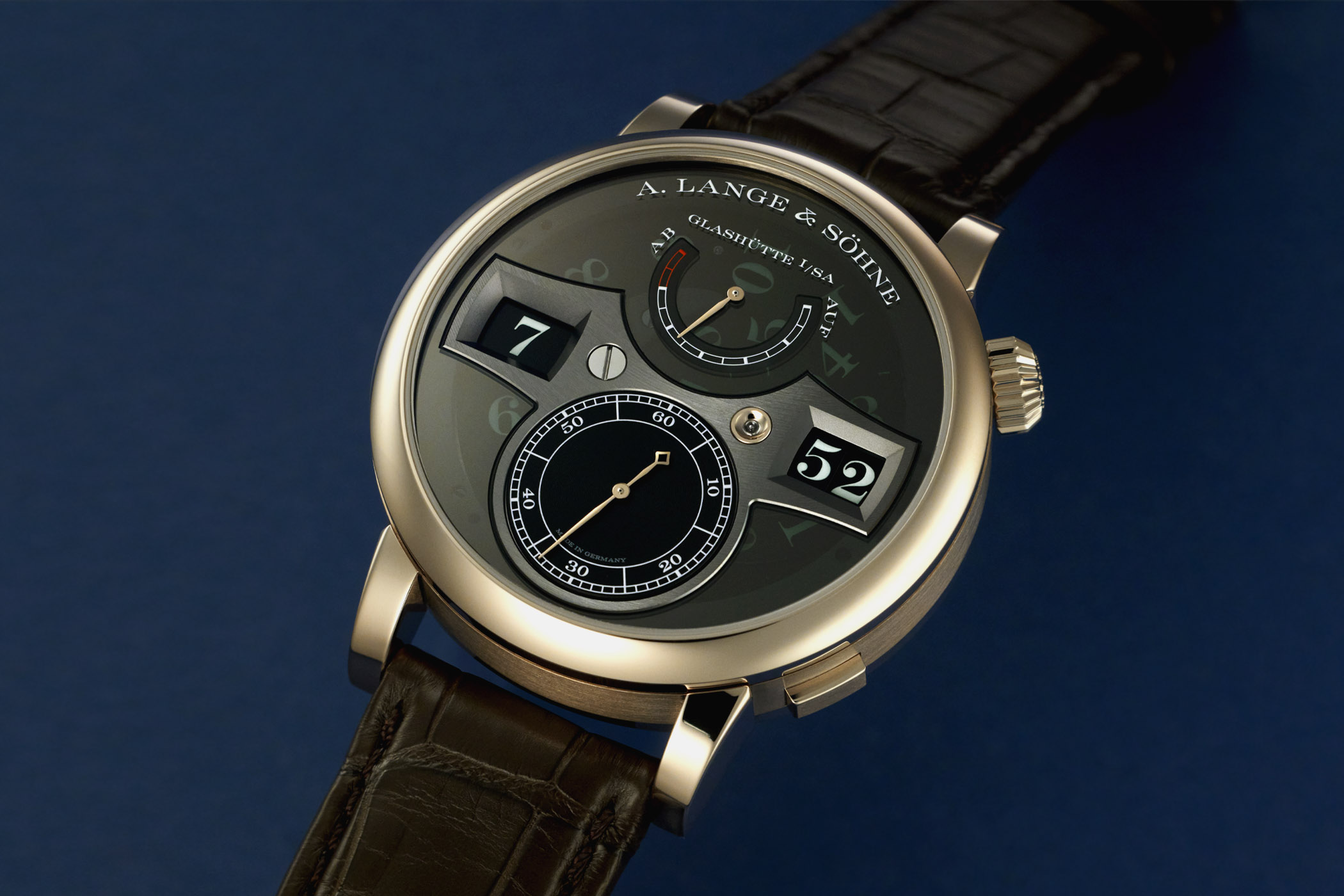 One of the main novelties with this edition is the material used for the case. Previous Luminous/Lumen editions have always been crafted in platinum, but this new model is housed in a case made of the brand’s proprietary Honeygold, a special 18k alloy with “various admixtures and a special thermal treatment” giving the gold more hardness and a very subtle colour. Only reserved to limited-edition watches at Lange – like the 175th-anniversary models – this rare and hard-to-machine alloy find its way for the first time in the Lumen series, but not in the Zeitwerk collection, as used previously in the 2017 Zeitwerk Decimal Strike. The case retains the same finishing as before, with a polished bezel and lugs, and straight-brushed flanks. It is worn on a brown alligator strap to give a final warm touch, something that has been absent of the previous Lumen watches, all with a black-on-grey and technical look… This Zeitwerk Honeygold Lumen, in this respect, feels rather surprising. 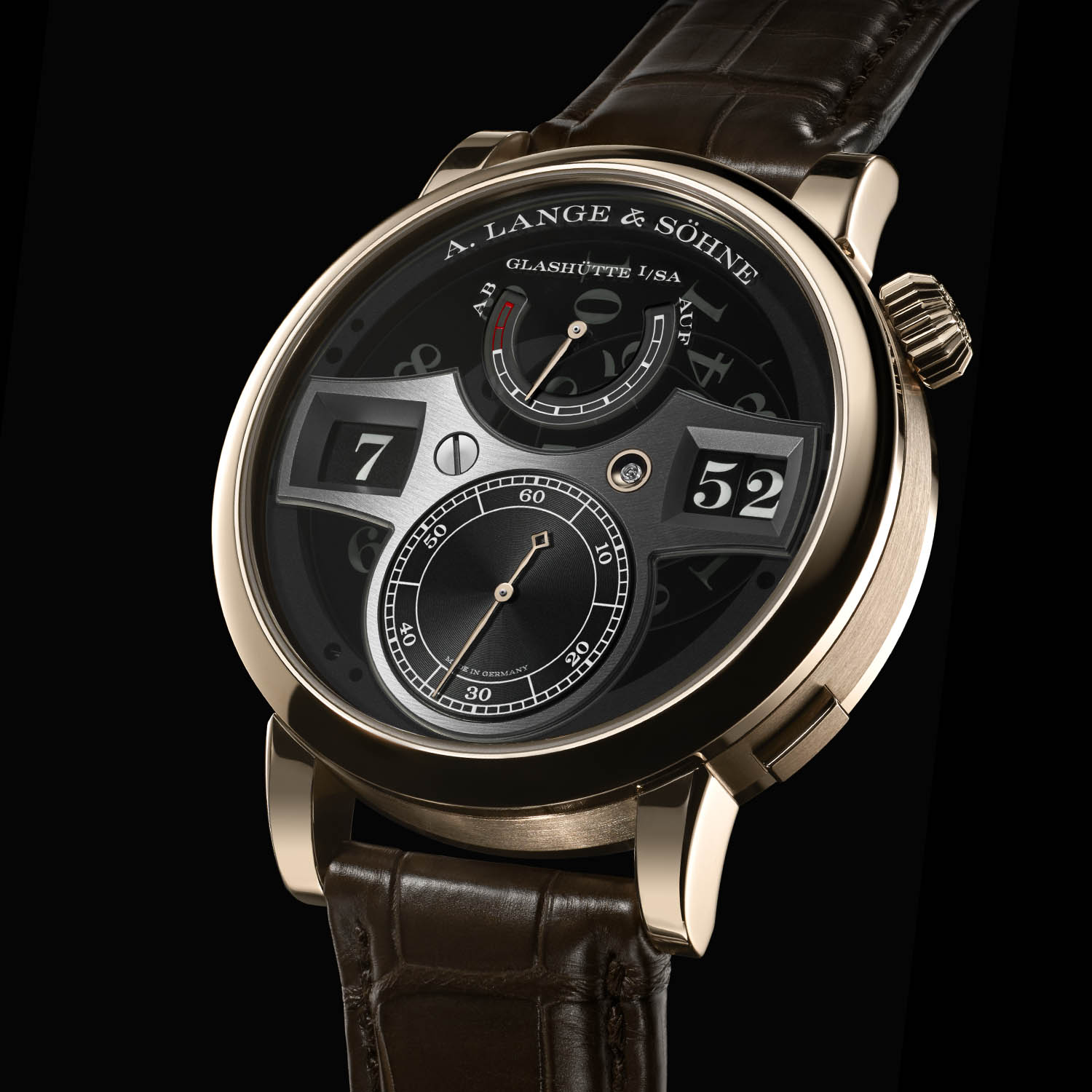 An important new element of this new Lumen watch is the presence of a pusher on the side of the case, which was absent from previous time-only Zeitwerk. This is where the influence of the Zeitwerk Date shows the most, as indeed the movement of this new version is based on the date model presented in 2019. It allows the hour indication to be switched separately, which in turn makes it simpler to set the time. The minutes are, of course, still adjusted by the crown. Like in the Zeitwerk Date, the switching impulse is generated when the pusher is released. “The advantage is that switching is always uniformly executed, regardless of how gently or vigorously the pusher is actuated,” explains A. Lange & Söhne. And from the words of Anthony de Haas, this system is also more compact than a classic pusher (think chronograph-like pusher) and this made it possible to retain the same dimensions as before.

Now, the dial… Being part of the series of Luminous watches, this Zeitwerk Honeygold Lumen is, of course, fitted with a partially-tinted sapphire dial. New for this watch, it’s not glued anymore but set in place between two O-ring gaskets, which make assembly easier and also provide more resistance in case of shocks. The sapphire dial comes with a light-permeable coating that allows the luminous numerals that are not exposed in the aperture (those normally hidden under the dial) to absorb enough UV light glow in the dark. So not only the numerals exposed in the apertures are luminous, but the hidden numerals are slightly visible under the sapphire dial too…

The display is still composed of a time bridge with two massive openings revealing a single disc for the hours and a combination of two discs for the minutes. Redesigned for the occasion, the bridge houses a larger sub-seconds dial and it is now executed in black rhodiumed German silver (instead of being black coated), giving it a slightly lighter and warmer tone. The power reserve indicator is still positioned at 12 o’clock and both hands on the dial are done in 18k Honeygold. 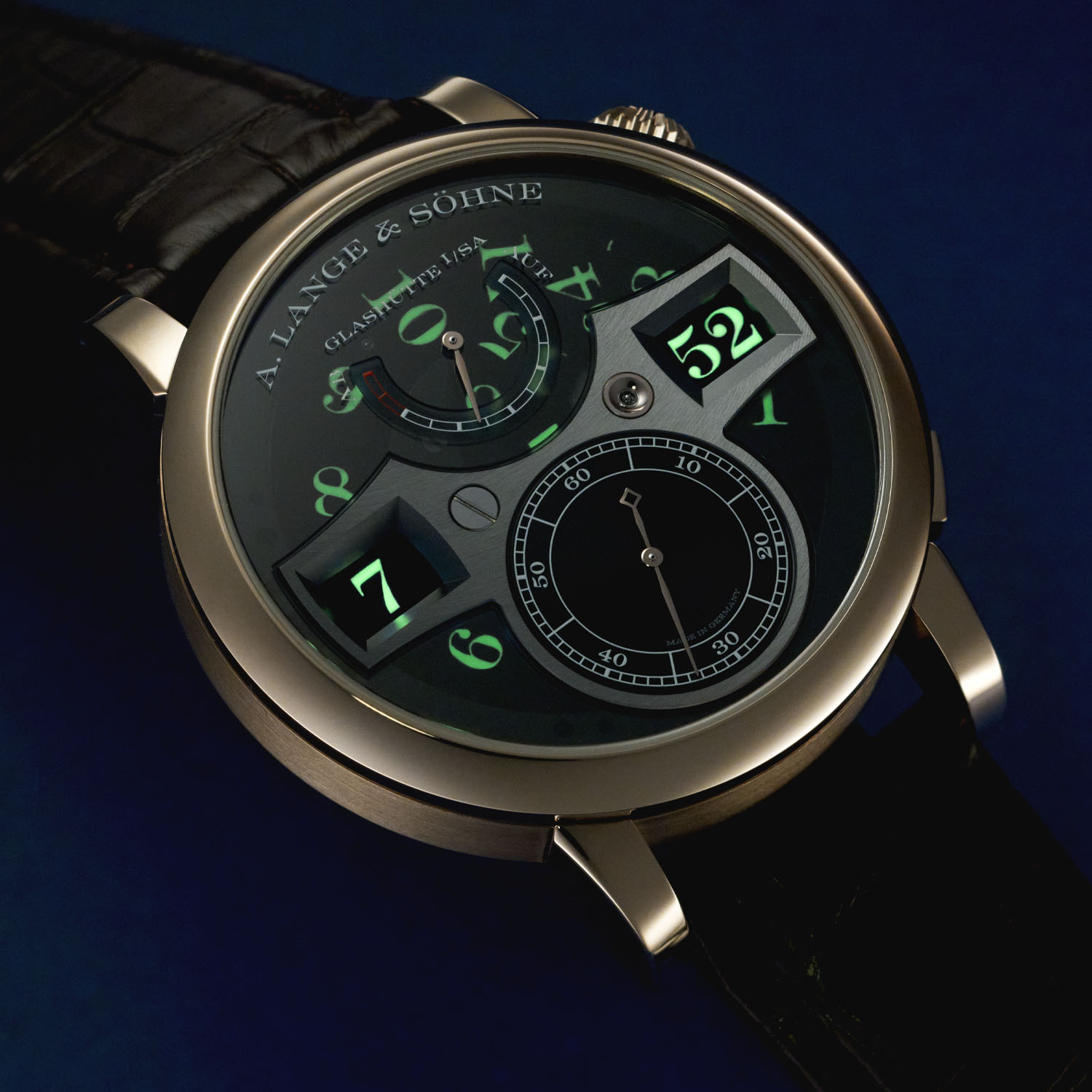 Back to mechanics, the Zeitwerk Honeygold Lumen retains the stunning display that has made the series distinctive, meaning a complex combination of three instantaneously jumping discs, giving the time in a digital format, and all numerals are identical in size. They switch precisely and read from left to right. Behind this mechanism is a complex constant-force device. Indeed, such large discs require an impressive amount of energy to be released. In addition, this one-minute remontoire (which thus drives the units-minutes disc) assures that the balance is always driven with constant power, enhancing the precision of this watch. In short, this one-minute spring that loads and unloads to actuate the jump of the discs also benefits the precision of the watch… 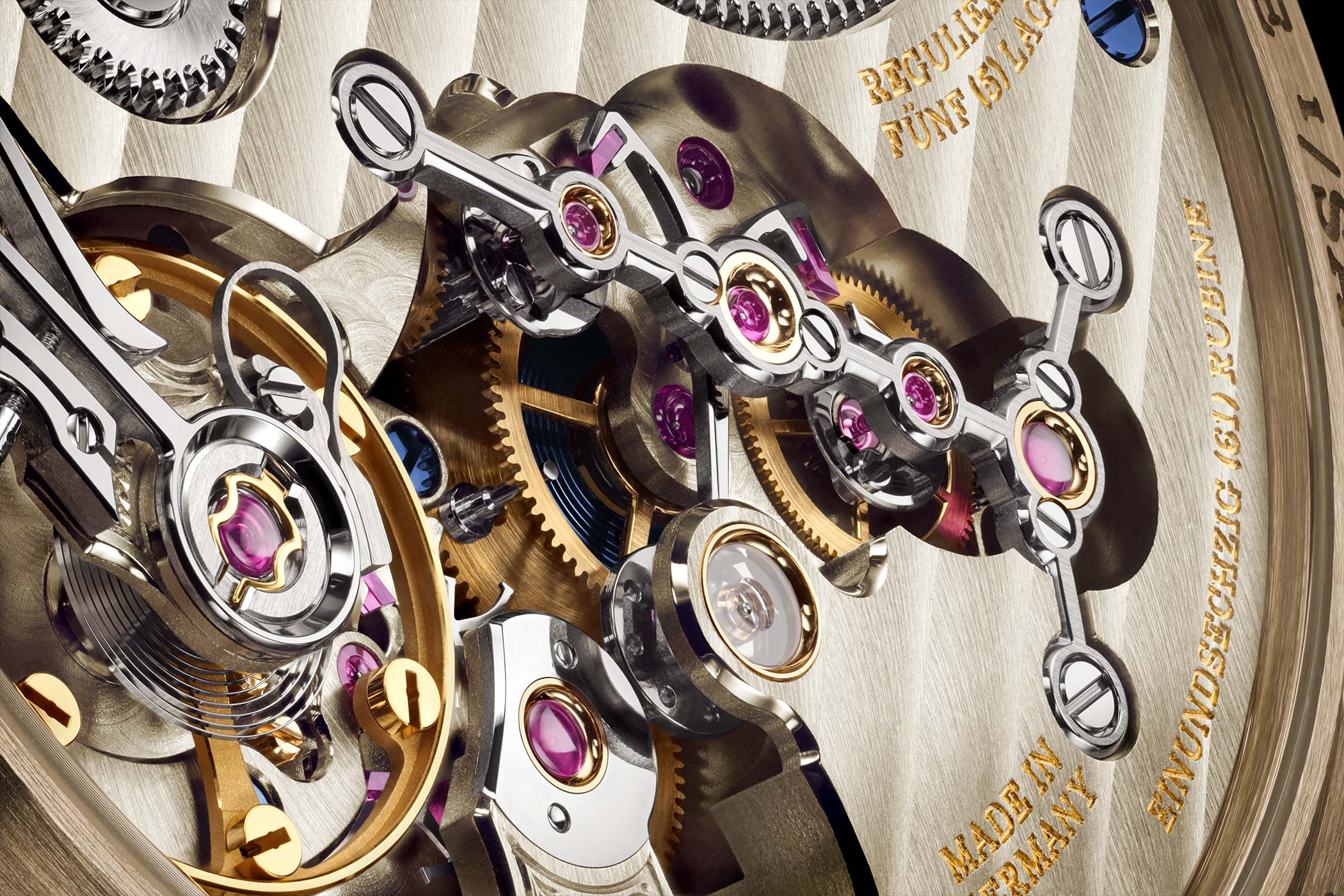 But that’s not new… What is new is the calibre L043.9, a movement that is based on the architecture of the calibre found in the Zeitwerk Date. But it’s more than just a small transformation, since the date complication wasn’t a module to be removed, meaning that this Zeitwerk Honeygold Lumen required to re-think the entire upper part of the engine. But, this also means that this new engine benefits from an architecture with two barrels stacked one on top of another. Combined with a lighter balance wheel and, consequently a lighter remontoire, this results in a power reserve that has been doubled, moving from 36 hours in the past to now 72 hours. It’s also rather certain that this upgraded movement will find its way into the case of the regular Zeitwerk sooner or later.

This longer power reserve, combined with the new hour-correction pusher, makes this calibre L043.9 a fairly impressive improvement over the previous generation. Composed of 462 components, the movement runs at 18,000 vibrations/hour (2.5Hz). Seen through the sapphire caseback, the design and the decoration are once again extremely appealing, with the delicate bridge on top of the remontoire being the star of the show. The rest is equally impressive, with hand-engraved balance and escape-wheel cocks, solarised winding wheels and filigreed, straight-grained constant-force escapement bridge that accommodates two recessed, screwed gold chatons. All parts are decorated, visible or not.