Staudt is a relatively young brand, born in The Netherlands, with a slightly different concept than the usual newcomers and their accessible take on watchmaking. The idea was to offer higher-end, well-designed watches with a classic look and nicely executed movements. Everything started with the Praeludium Hand-Wound, followed two years later by a chronograph version of this watch. Today (and appropriately), the brand masculinizes its game with a full black watch, the new Staudt Praeludium Chronograph Black Edition.

From music to watches

Behind this brand is a young Dutchman named Yvo Staudt – and there was no indication that one day this musician, born in 1991, would become the owner of a watchmaking company. Yvo started his life as an accordionist, mainly playing classical music. Yet, Yvo had a passion for watches and visualized his first timepiece during his study at the Conservatoire in Pescara, Italy, without being able to find the watch to suit his needs. Thinking “if you want something done right, you have to do it yourself“, he decided to start his own watch company: Staudt Watches. 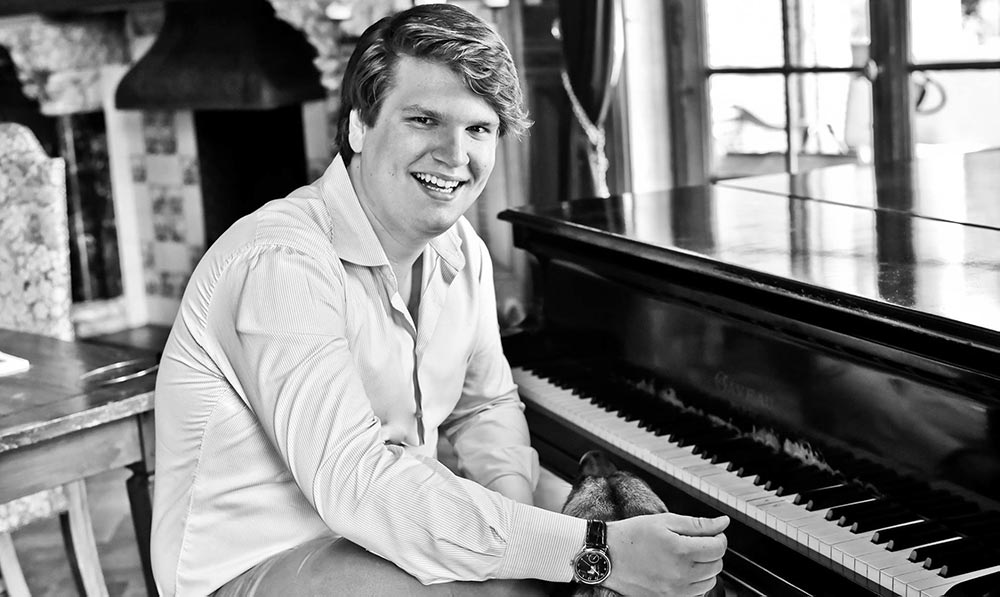 His first creation was named after a musical term, the Praeludium or Prelude (in English). The Staudt Praeludium Hand-Wound (reviewed here) was inspired by nautical elements, ships and marine chronometers, resulting in a classical, elegant but still a rather casual watch – and with traces of “Portuguese” design elements. A chronograph version followed, still with the same overall design, nice execution and classic, casual-elegant look.

Following last year’s chronograph versions, a dressy watch available in a steel case with ivory, blue or black dial, the brand is introducing a sportier, more masculine version of this watch fully dressed in black.. 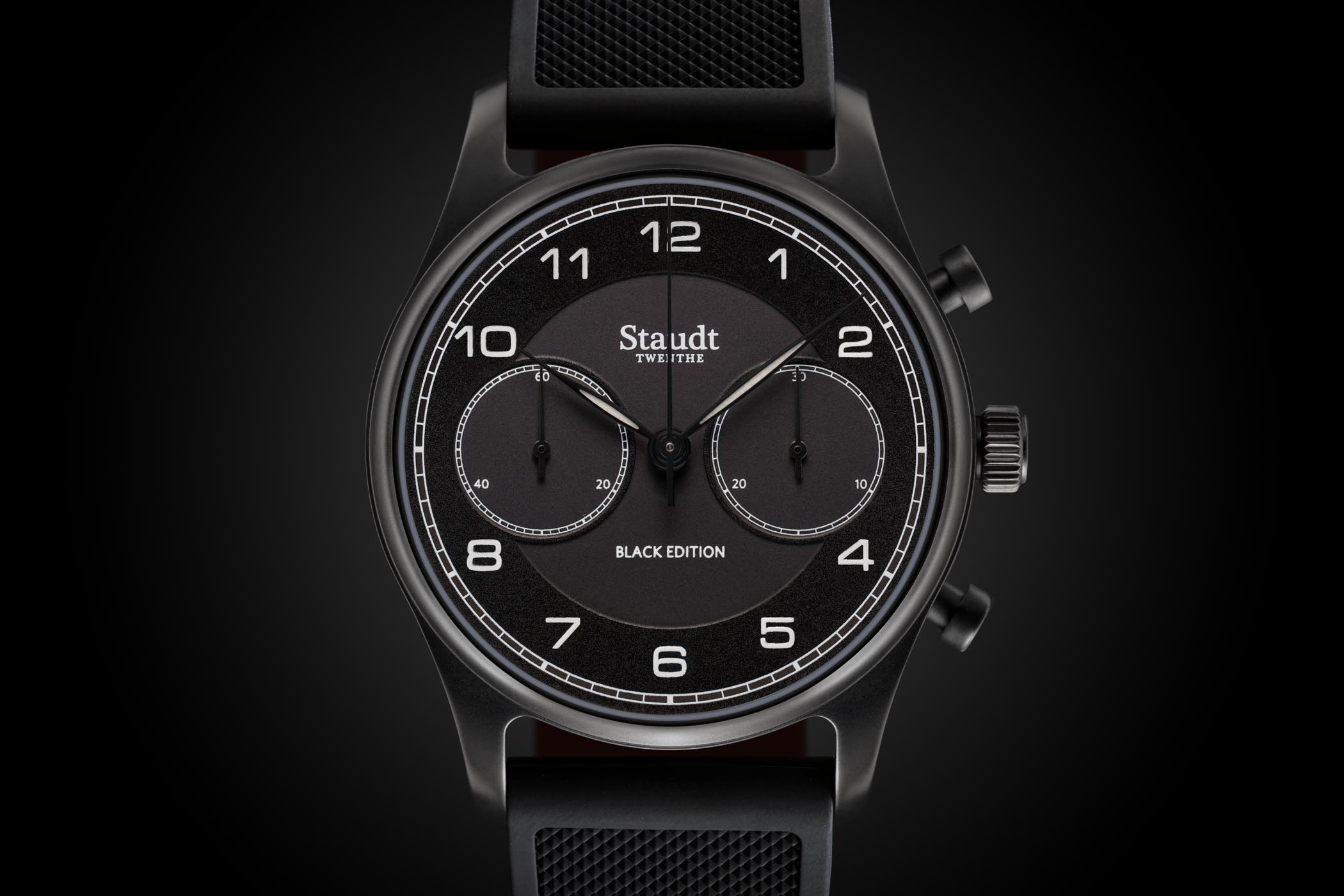 The basics of the watch are still the same. The Staudt Praeludium Chronograph is a modernly but not overly sized watch, with a 41mm diameter and 13.6mm height. The lug-to-lug dimension is on the large side, with 51mm, but the lugs are curved and result is a watch that remains balanced. For this special “Black Edition”, the case has been entirely treated in matte black DLC – case, bezel, caseback, pushers and crown. 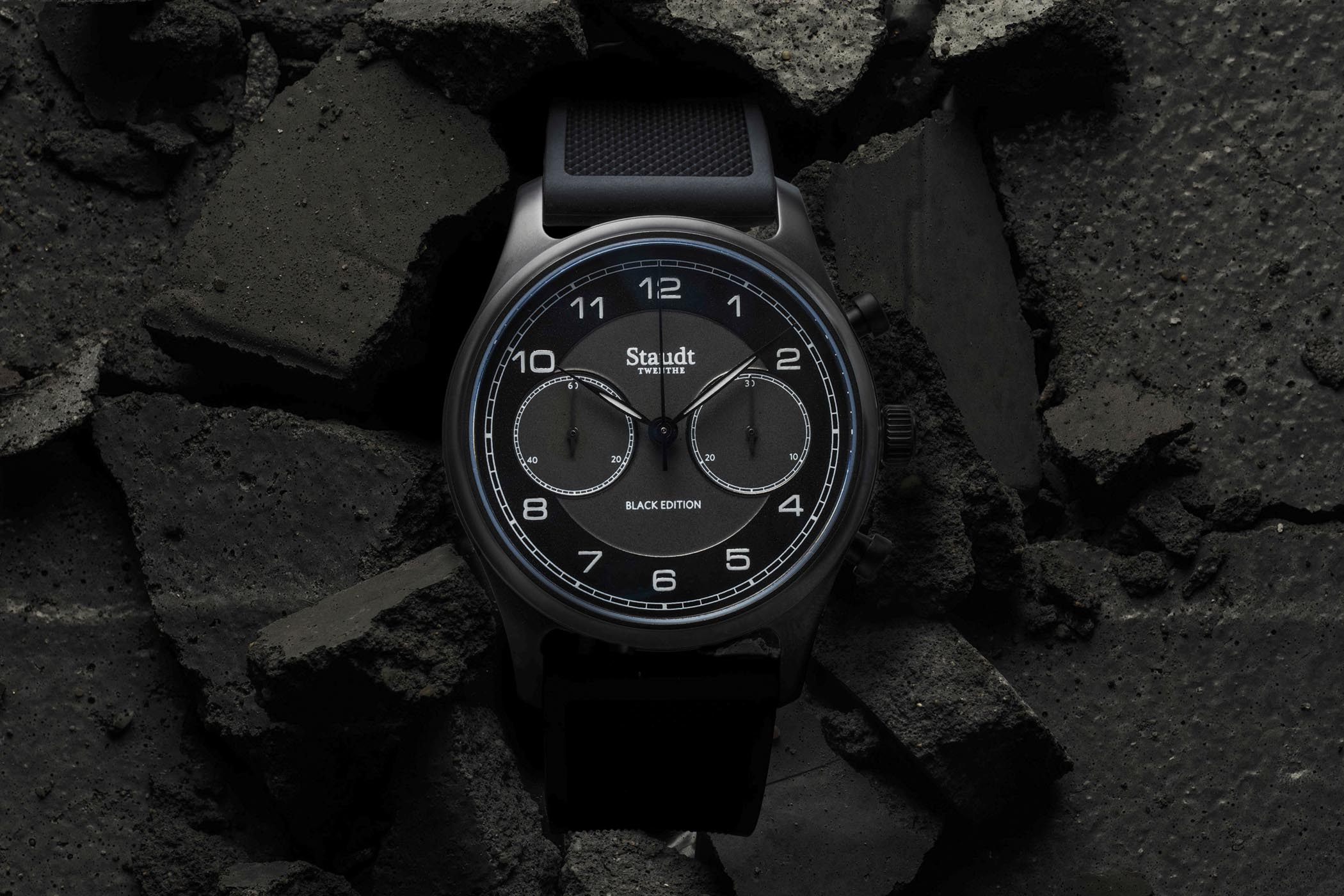 Complementing this bolder, sportier look, the Staudt Praeludium Chronograph comes with a textured black rubber strap – again, less classic than a leather strap but with this “clous de Paris” pattern, it remains relatively elegant. The dial also underwent some evolutions. We still find the two-tone scheme, with a dark grey central area and a matte black hour chapter ring, also circling the sub-dials. The hands are now filled with Super-LumiNova, and so are the Arabic numerals, redesigned in a more modern way for the occasion. The dial remains clean and well-balanced, with thin markers and tracks.

Powering the Staudt Praeludium Chronograph Black Edition, and visible under the sapphire caseback, is a classic, well-known and reliable ETA Valjoux 7753 – the bi-compax version of the 7750. Running at 4Hz, with 48-hour power reserve, it is decorated with perlage, blued screws and a rose gold-plated rotor.

The Staudt Praeludium Chronograph Black Edition is a limited edition of 100 pieces, available today from the brand’s website here. It is priced at EUR 3,289 (taxes included).