2019 has been an intense year for Seiko regarding the chronograph topic. Indeed, the brand was celebrating (like two other Swiss manufacturers) the 50th anniversary of its first automatic chronograph, with this watch as an hommage. But that wasn’t all. The brand was also celebrating the 55th anniversary of Japan’s first-ever chronograph watch, the 1964 Seiko “Crown Chronograph”, which gave birth to the modern Presage Chronograph 55th Anniversary SRQ031 – a more traditional tri-compax chronograph. Now, Seiko wants to be more faithful regarding the original design of this 1960s piece, and launches the Seiko Presage 2020 Limited Edition, time-and-date watches with clean looks.

It might come as a surprise to some (early chronographs were built in Switzerland, back in the 1820s), but Japan’s watchmaking industry only launched its first chronograph watch and movement in 1964, with the Seiko Crown Chronograph and its Calibre 5719. 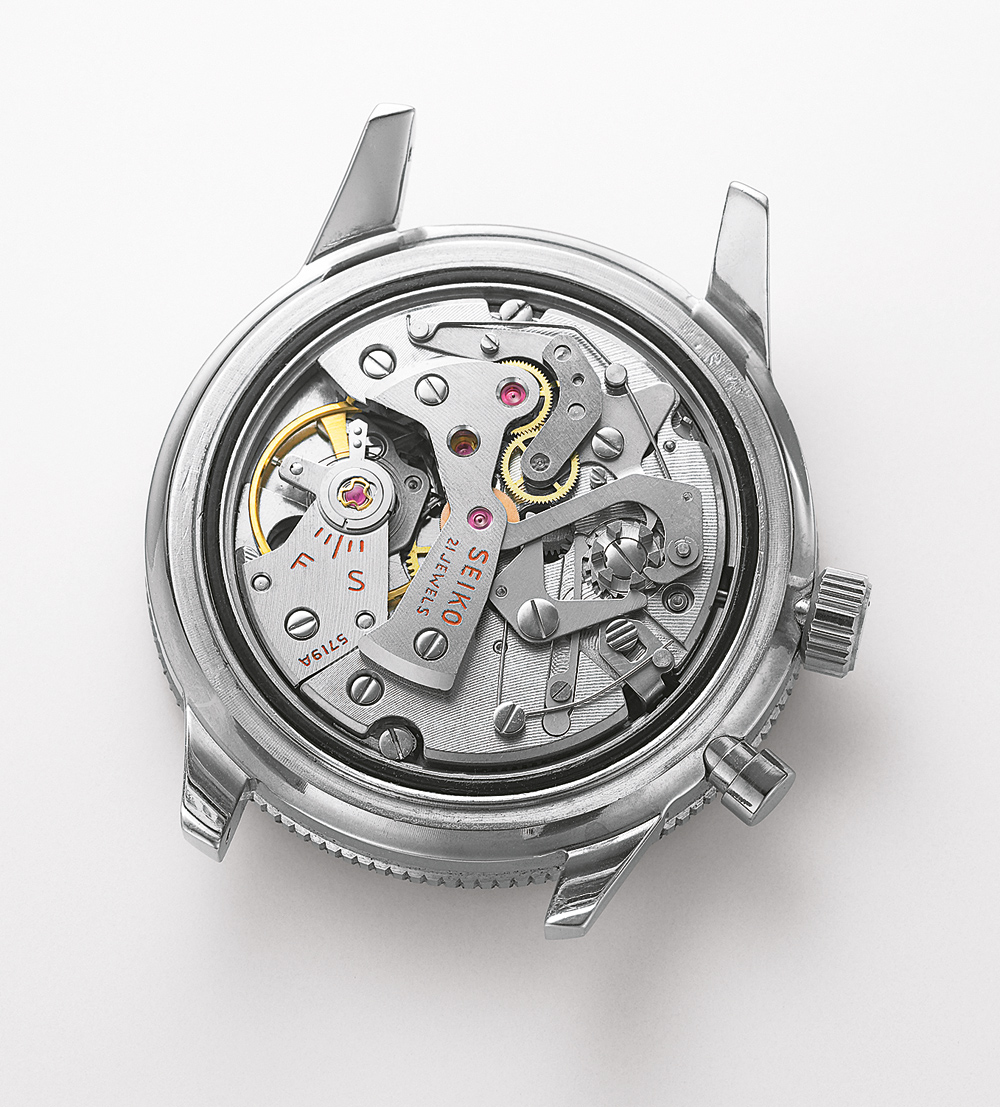 Far from having the same cult status as the automatic calibre 6139/6138, the movement developed by Seiko is, nevertheless, rather interesting. “Suwa Seikosha, i.e., Seiko’s factory in the city of Suwa, developed the watch, which was launched in time for the 1964 Summer Olympics. It was powered by the 12-ligne, hand-wound Caliber 5719. The salient features of this 6.1mm-thick movement included a single button to trigger the chronograph’s functions, horizontal coupling, and a column wheel to control the start, stop and return-to-zero functions. The balance was paced at 5.5Hz, or 39,600vph. With the chronograph mechanism switched on, the movement would run for 38 hours,” according to Watchtime here. 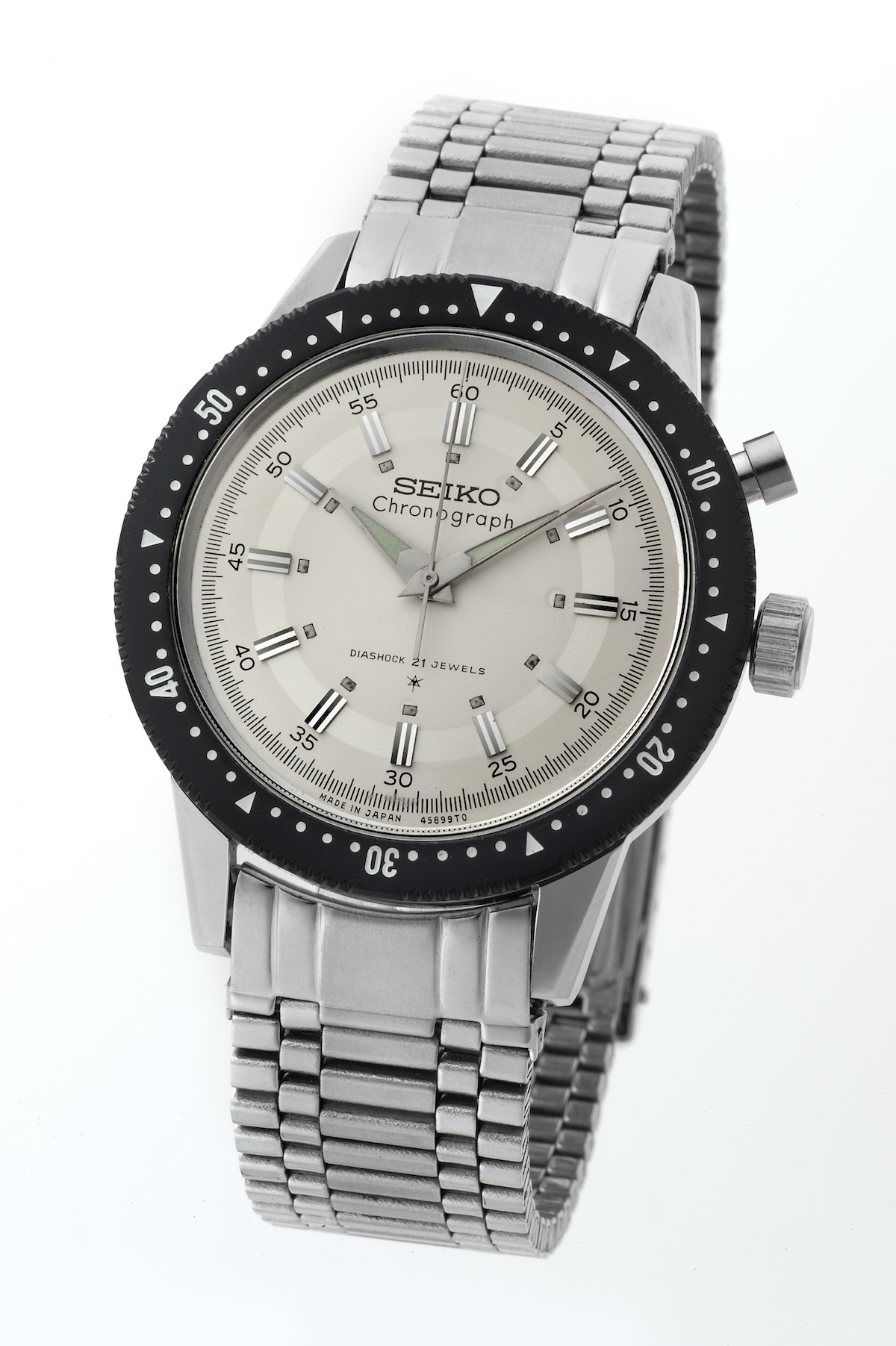 Powered by this calibre 5179, Seiko launched its first chronograph wristwatch in 1964, with the Crown Chronograph. This steel sports watch with its 38mm diameter was rather unusual, compared to today’s classic features of a chronograph. First of all, it was a mono-pusher. Second, its dial resembled a classic 3-hand watch, without sub-counters. In order to record elapsed times, Seiko equipped it with a black rotating bezel, with a 1-minute increment scale. To measure intervals of more than one minute, the wearer had first to rotate the bezel to point to the 12 o’clock triangle in front of the minute hand. Obviously, not the most practical device, explaining why later Seiko chronographs would feature sub-counters.

Nevertheless, practicality apart, the design of the 1964 Crown Chronograph certainly is desirable. Hence why after having launched a chronograph with sub-counters inspired by this watch (ref. SRQ031), Seiko is today bringing the original design, minus chronograph, with the new Presage 2020 Limited Edition ref. SPB127J1, SPB131J1 and SPB129J1.

No need to argue for hours, these new watches are by no means original recreations of the original 1964 Crown Chronograph, for the main reason that they are time-and-date watches. They have to be seen as modern evocations of this glorious past model, using the flair of this watch in a contemporary package. Still, they look rather brilliant indeed. 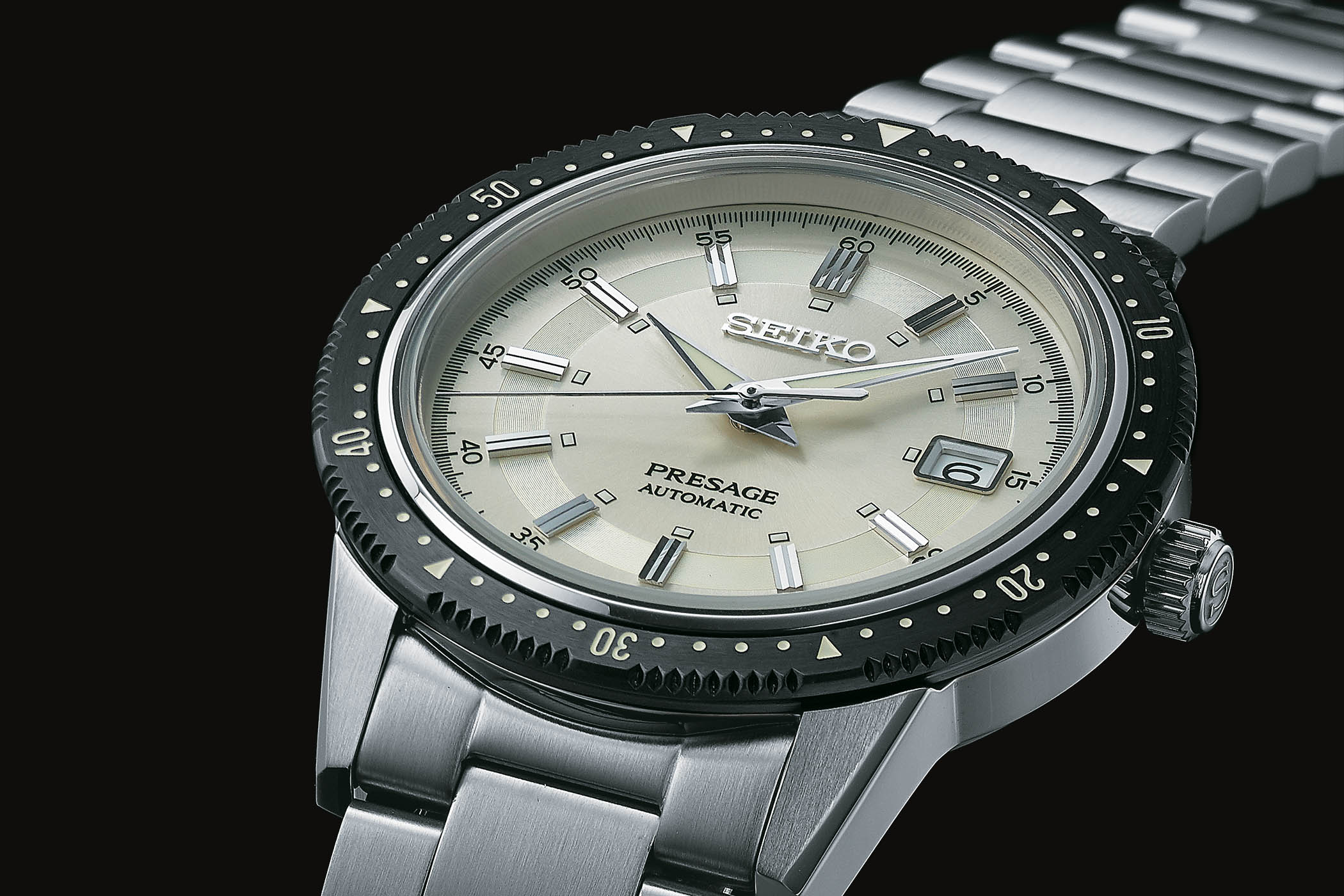 These new Presage 2020 Limited Editions are the 3-hander version of the watch we’ve presented in October 2019, the Chronograph SRQ031. With this in mind, you’ll see multiple resemblances between these two watches, whether for the case, bezel or the dials. Let’s explore them into more details.

First, the case of these SPB127J1, SPB131J1 and SPB129J1 have been increased in diameter compared to the 1964 watch, as now measuring 41.3mm. This is, on the other hand, 1mm less than the chronograph version, and the thickness is also drastically reduced, with now 11.3mm in height (compared to 15.3mm for the SRQ031). No need to say that comfort will be improved. The design itself remains identical, with angular lugs evoking the old model and a succession of brushed and polished surfaces – including a nice angled bevel on the side of the lugs. The most notable feature of the 1964 Crown Chronograph was its black bezel with a 60-minute scale. This has been reissued here, with equal graduation and same grip profile. This black bezel works great on the 3 models, but even more on the silver dial version – the most faithful of the 3. As you’ll see, no pusher on this watch but just a classical screw-down crown at 3 o’clock (with a 100m water-resistance). The watch is protected by a domed sapphire crystal with anti-reflective coating on the inner side. Regarding the dials, the filiation with the 1964 watch is obvious. We here have the same double-faceted applied markers and the same delta-shaped hands. So is the two-tone layout of the dial, with a contrasting chapter ring under the applied markers. Finally, graduations are identical, with a seconds track on the periphery, then minute gradations and small rectangular luminous markers on the inside of the dial. A date is positioned at 3 o’clock (was it really necessary…?)

The Seiko Presage 2020 Limited Edition collection is composed of 3 watches. The first model – ref. SPB127J1 – shows a warm silver dial, just like the one found on the original watch. The two other editions are more contemporary, being black – ref. SPB131J1 – or “forest” green with blue reflections – ref. SPB129J1. All three models are delivered on a 3-link Oyster-like stainless steel bracelet with folding clasp and powered by the in-house Calibre 6R35, Seiko’s mid-range movement. Shared with the recently-updated Sumo dive watch, it is an evolution of the well-known 6R15. The base remains the same, with a 3Hz frequency, a central rotor for the automatic winding, a quick-set date, and a stop-second device, however, the power reserve has been improved to a comfortable 70 hours (instead of 50 hours). The movement sits under a screwed caseback.