When it first came on the market in 2015, the Patek Philippe Calatrava Pilot Travel Time 5524G clearly made some noise. It was simply miles away from your classic Calatrava watch, and the first production Pilot’s watch created by Patek (there were some prototypes in the past, though). But the watch found its place in the collection, as a sportier yet still luxurious offer. It will then be followed by a mid-size offer (advertised a feminine watch, but that I prefer to name unisex), with identical functions and a smaller 37.5mm. And there’s a new version of this watch coming, in blue attire. Meet the Patek Philippe Calatrava Pilot Travel Time 7234G-001. 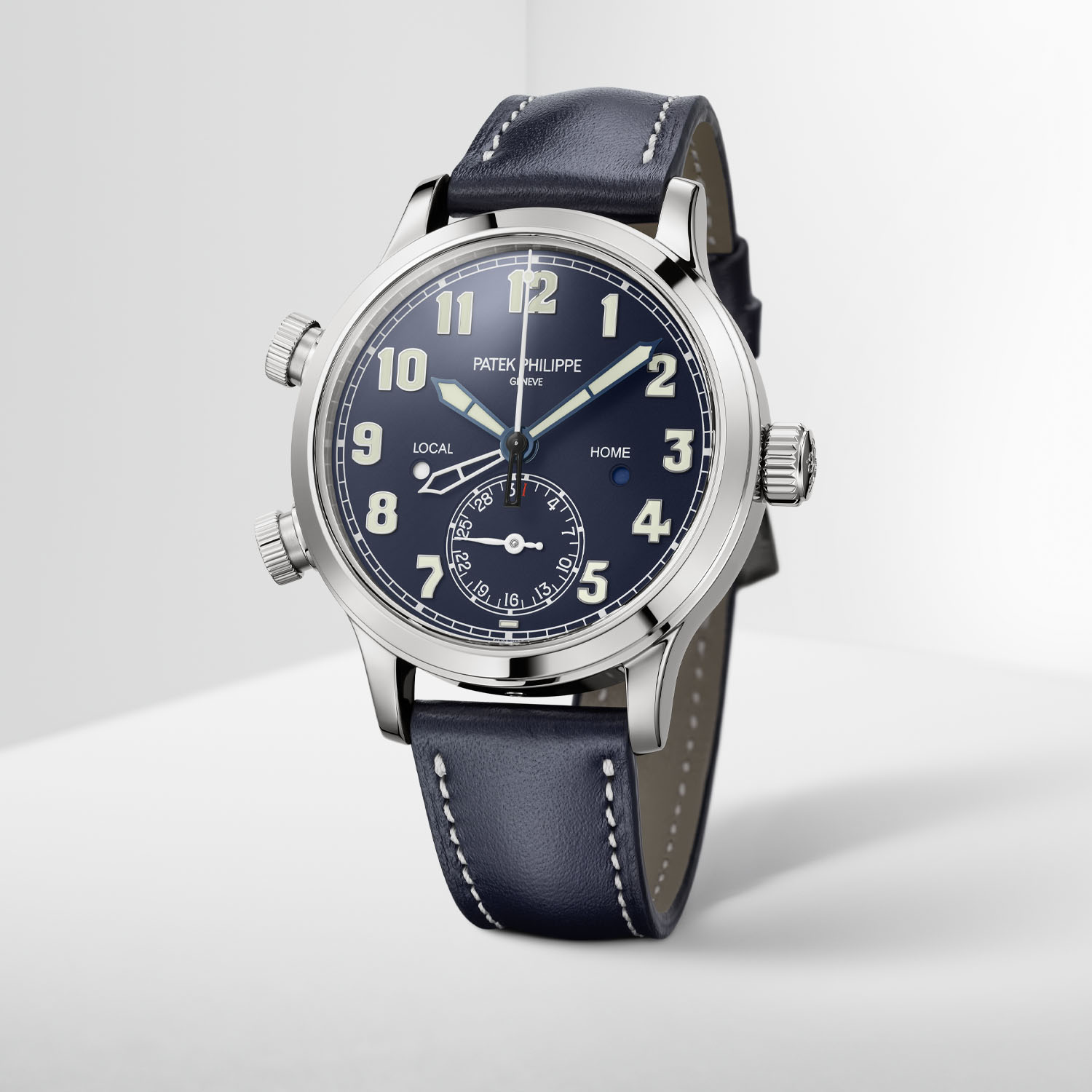 In 2015, the Calatrava Pilot Travel Time really surprised the crowd at Baselworld. No doubt, this was a disruptive watch, especially compared to other extremely classical watches offered in the Calatrava collection (thin, compact dress watches mostly). A highly unusual design for Patek, a large and sporty case, a matte blue dial with large white numerals and luminous hands… nothing here was traditional, at least for the brand. But this watch didn’t come out of the blue, as its roots can be traced back to 1936. Indeed, it took inspiration from two aviator’s watches that had been crafted in the manufacture in 1936 and are now exhibited at the Patek Philippe Museum in Geneva. They were very special siderometer (hour-angle) watches that allowed pilots to easily, precisely, and swiftly determine their current positions. In 2015, the concept was slightly different, housed in a 42mm white gold case and equipped with a clever dual time zone function. In 2018, in addition to the new 5524R, the brand launched a smaller version – which, at 37.5mm, is clearly a mid-size offer according to us – with the reference 7234R. 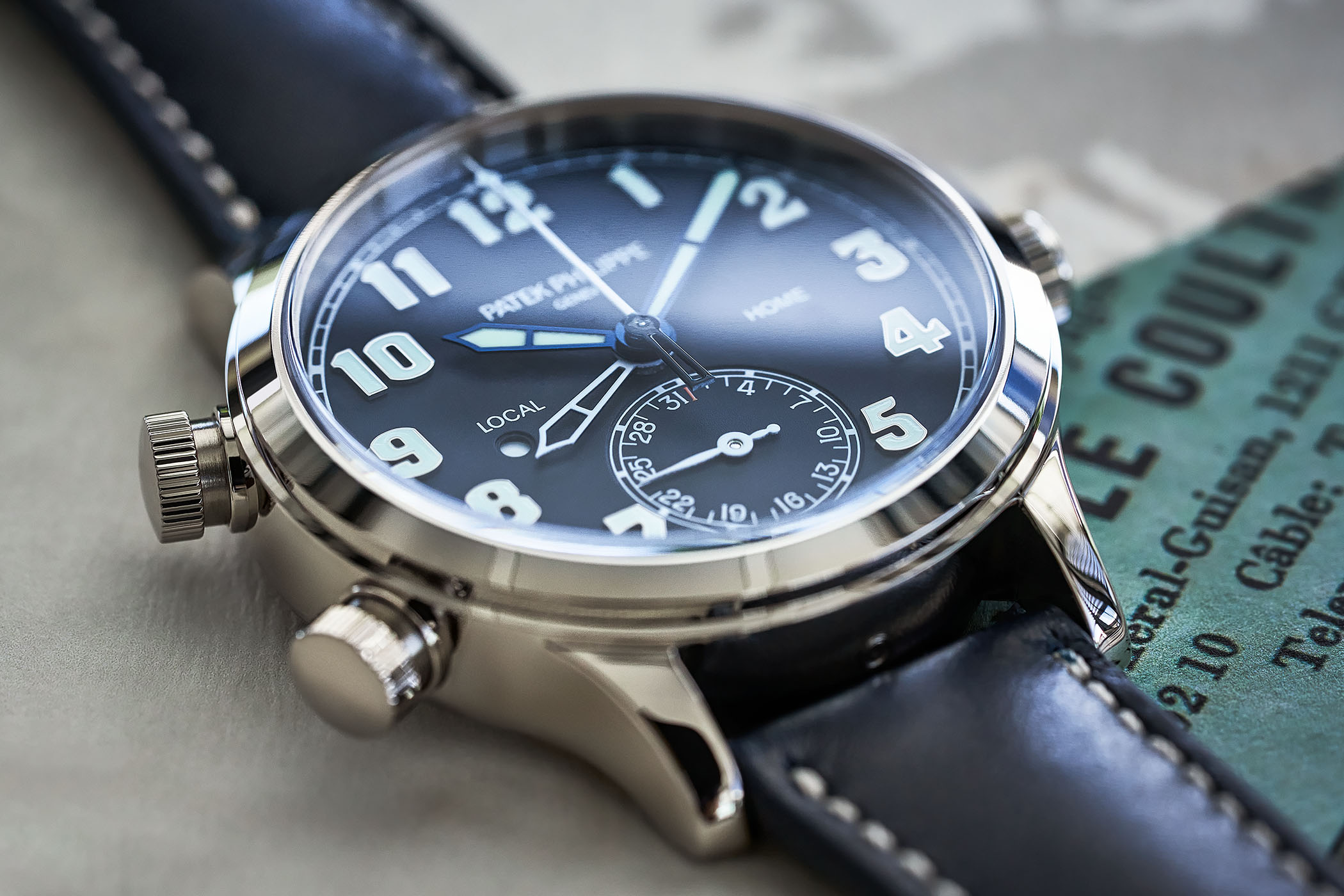 For 2020, Patek Philippe is adding a new white gold model to the collection, which also includes a rather complex model, the Alarm Travel Time 5520P – here again, a watch that didn’t create consensus… The new Calatrava Pilot Travel Time 7234G takes all the attributes of the brown dial and rose gold version, only differing in terms of materials and colours. 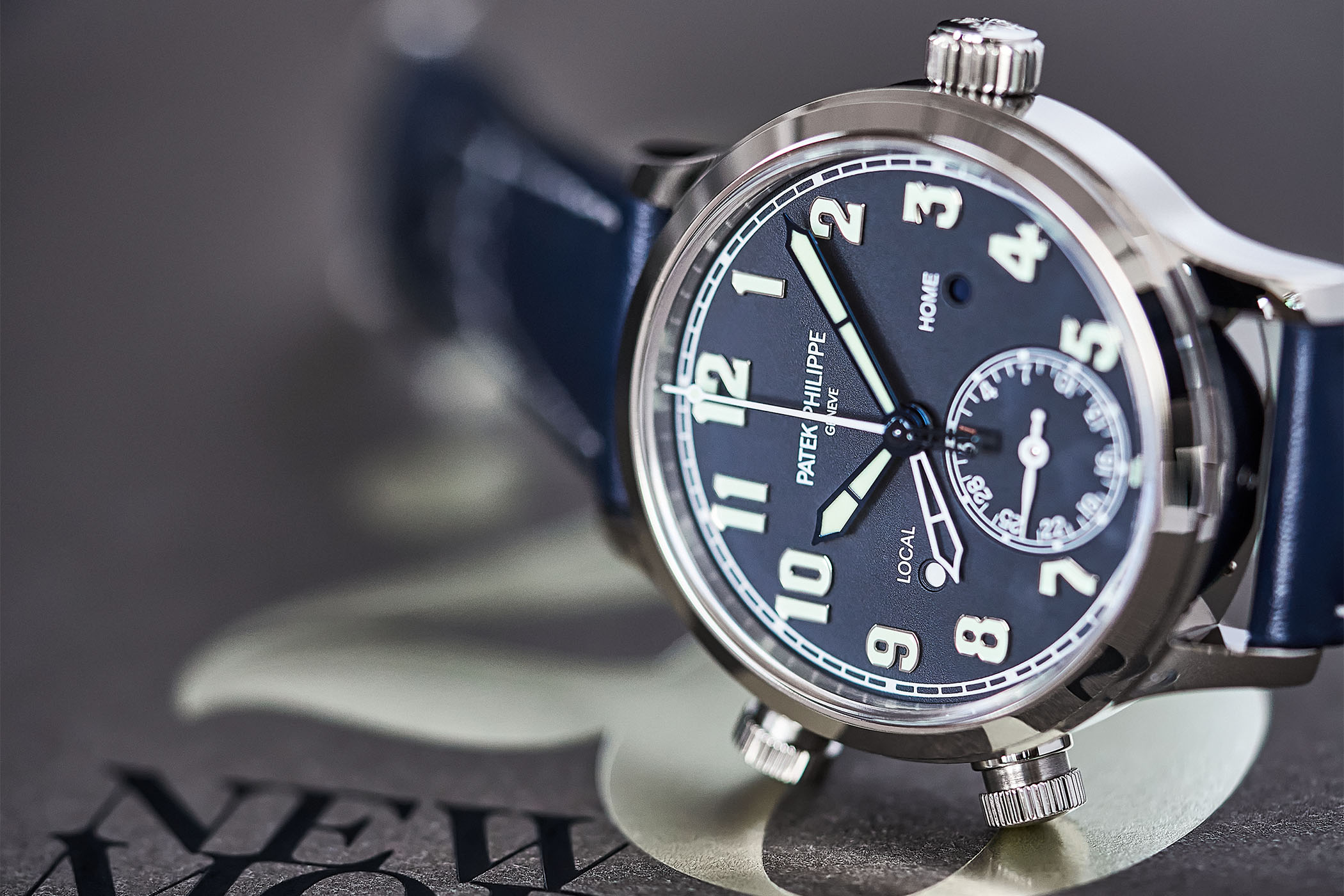 The 37.5mm case of this Calatrava Pilot Travel Time is now made of 18k white gold. Even though we still believe that stainless steel would be a more appropriate material for this Pilot-inspired model, white gold also better fits the concept in terms of colour, being more discreet and more casual than rose gold. The case retains its fully polished surfaces and is equipped with the signature (debated…) twin-pushers at 8 and 10 o’clock, used to actuate the second time zone. These are screwed and so is the crown, yet water-resistance is rated at 30 metres. The case remains rather thin at 10.78mm, which combined to the compact diameter makes it a great option for modern women or men who’re looking for something more elegant than the 42mm of the ref. 5524.

The other novelty in this ref. 7234G-001 is the dial, which actually is the same as the first 5524G. As such, this brass-based dial has a matte, grained blue lacquered surface and is equipped with large, highly contrasted white gold applied Arabic numerals, largely filled with Super-LumiNova. Same goes for the hours and minutes hands, which are vintage cathedral-style made of blued white gold and also luminous. The display is completed by a date by hand at 6 o’clock, a central white openworked home-time hand and two circular apertures, being night-and-day indicators for both local and home time. The second time zone is super practical, being actuated by pushers (+ and -) in one hour increments.

The casual design of the Patek Philippe Calatrava Pilot Travel Time 7234G-001 is complemented by a blue calfskin strap, closed by a prong buckle. The watch is also delivered with an additional vintage brown strap. 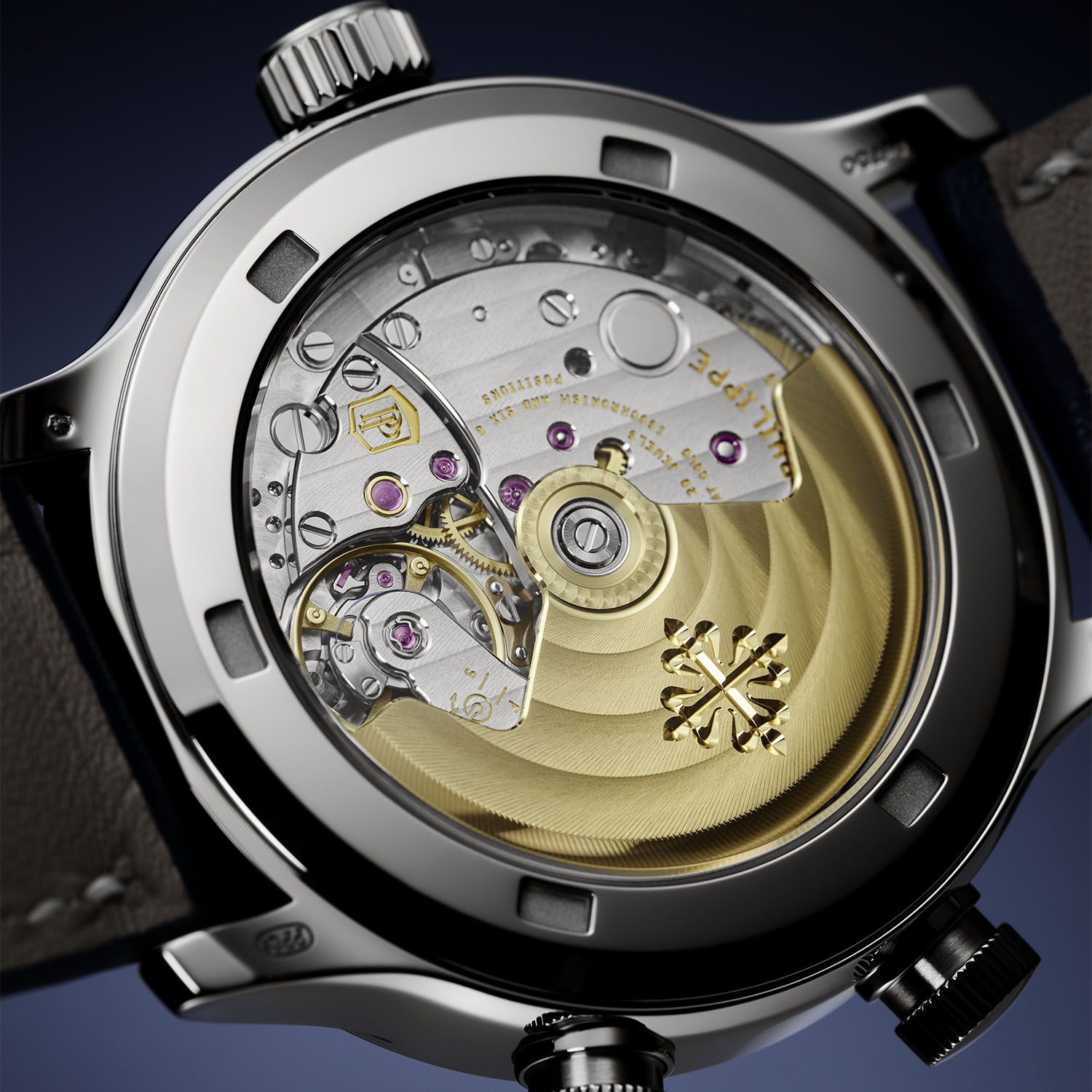 Inside the case is Patek’s classic automatic calibre 324, a movement used in multiple collections (incl. the Nautilus or the Aquanaut). This movement has a 21k gold central rotor and runs at a 4Hz frequency. It is equipped with Patek’s modern technologies, such as the Gyromax balance and Spiromax balance spring. Its power reserve is, however, on the short side – min. 35 hours and max. 45 hours. The caseback is in sapphire, so the nice decoration of this calibre can be seen, with polished bevels, Geneva stripes and the handsome oscillating weight. The watch is certified by the Patek Philippe Seal.

The Patek Philippe Calatrava Pilot Travel Time 7234G-001 comes in addition to the existing 7234R, and thus is the smaller pendant to the early 5524G. It will be priced at EUR 42,180. More details at patek.com.