Recently, we’ve introduced to you OW Watches, the revived Ollech & Wajs, a hidden gem of the vintage watch industry, maybe not as well-known as most mainstream brands, but still an icon of the tool watches. After two inaugural tool/pilots watches, the OW P-101 and the OW P-104, it is time for OW to bring back its most iconic dive watch, the Ollech & Wajs Caribbean 1000. So here it is, the new OW C-1000. Still relatively accessible, still cool, even more robust.

The OW C-1000 is a modern take on the iconic Ollech & Wajs Caribbean 1000, fruit of the collaboration between Ollech & Wajs Zurich and the Jenny Watch Company in 1964. Equipped with a reliable ETA 2452 movement, and the 1000m (3,300 feet) water-resistant 702 case, the Ollech & Wajs Caribbean 1000 was adopted among others by the diving world record holders Alberto Novelli and Cesare Olgjai, as well as field-tested by the explorer Roberto Dei who brought it to the red sea and the north pole, and by the professional divers at Global Marine Incorporated. 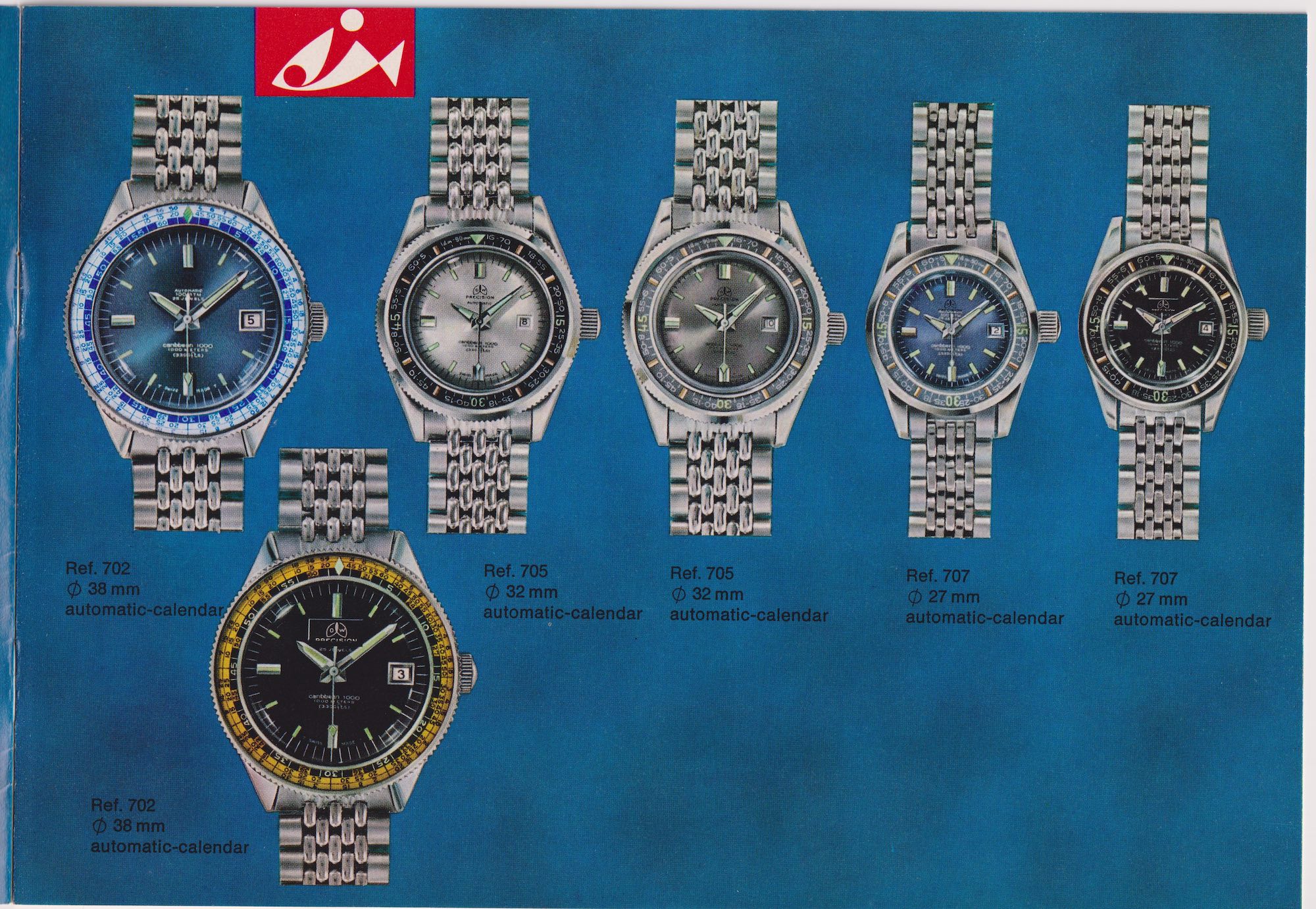 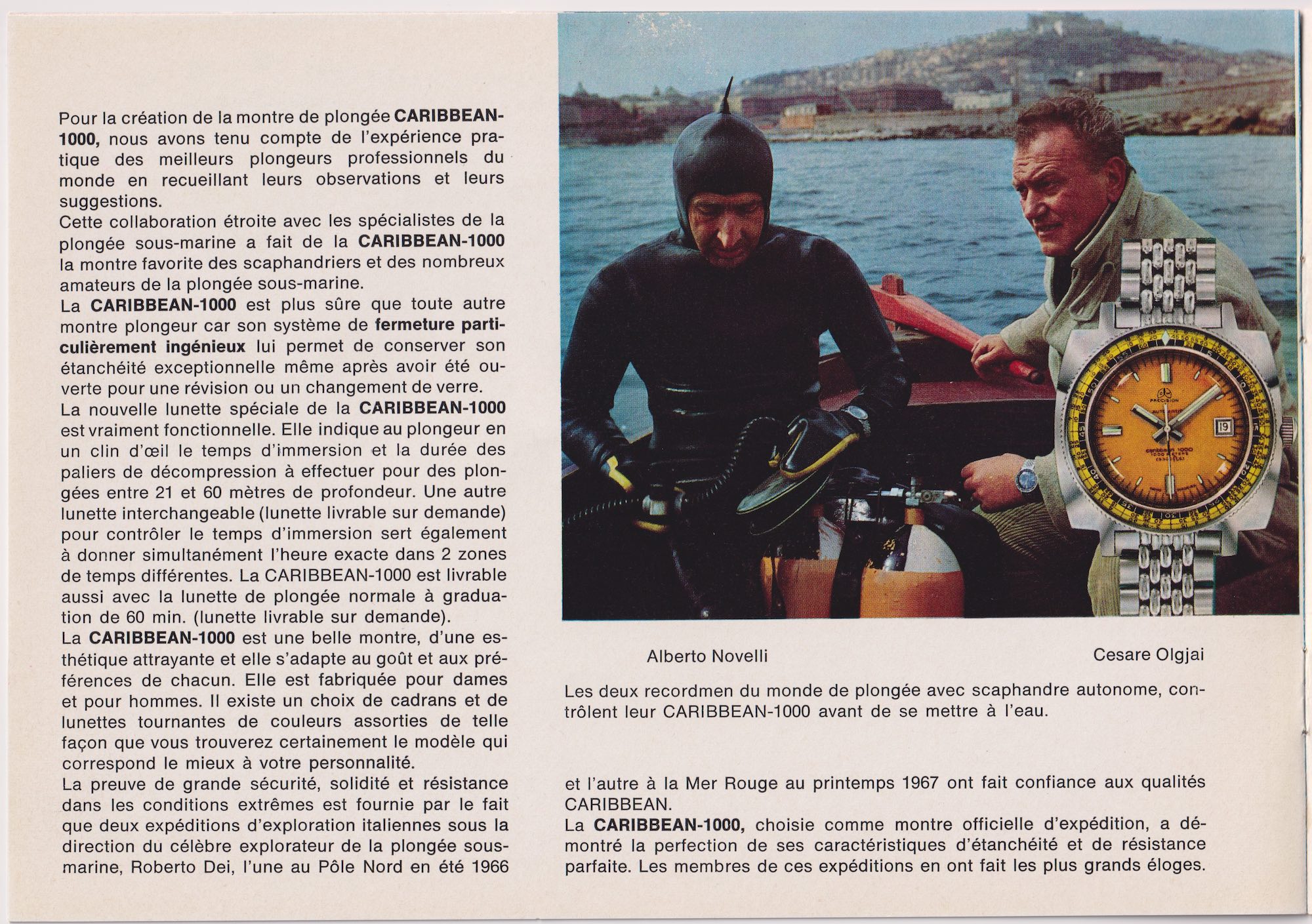 As said, these new dive watches are a modern take on the Ollech & Wajs Caribbean 1000, which is here evoked but not per se copied. Consider this a tribute more than a re-edition. As such, the new OW C-1000 shares a lot with its two previous sisters, the OW P-101 and the OW P-104, starting with the overall shape of its toolish, robust case. 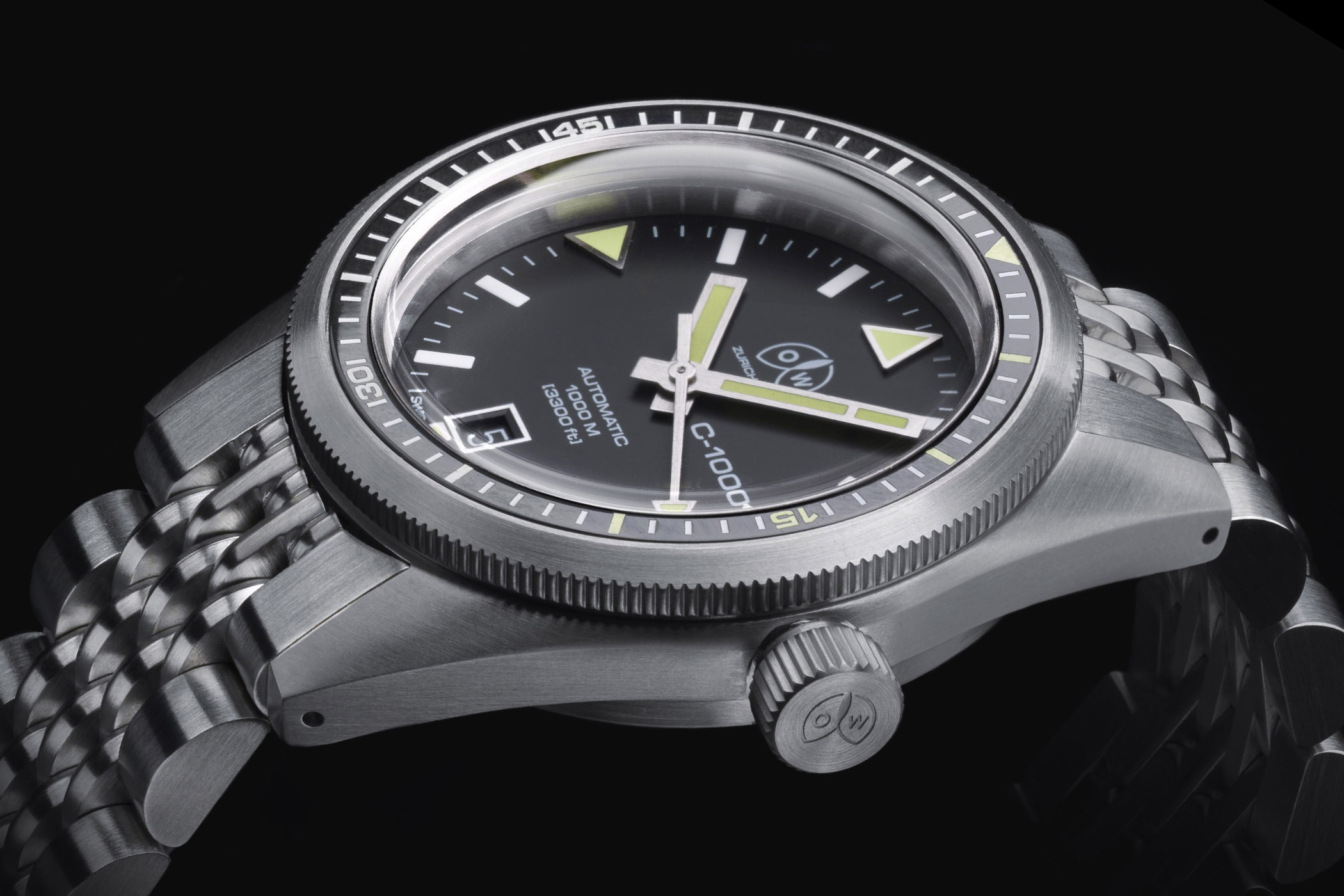 The OW C-1000 is meant, like the rest of the collection, to be an instrument watch, hence the fully brushed surfaces and the highly protected case. As previous models, it is housed in a relatively compact case, measuring 39.56mm in diameter – made of 316L stainless steel. However, while the OW P-101 and the OW P-104 were field watches with a 300m water-resistance, the new Caribbean is a true diver, with a 1,000 / 3,300ft water-resistance. In this instance, the case features a new screw-down crown with triple gasket, a reinforced screwed case back and an extra-strong domed sapphire crystal – explaining the slightly thicker case, at 15.15mm. 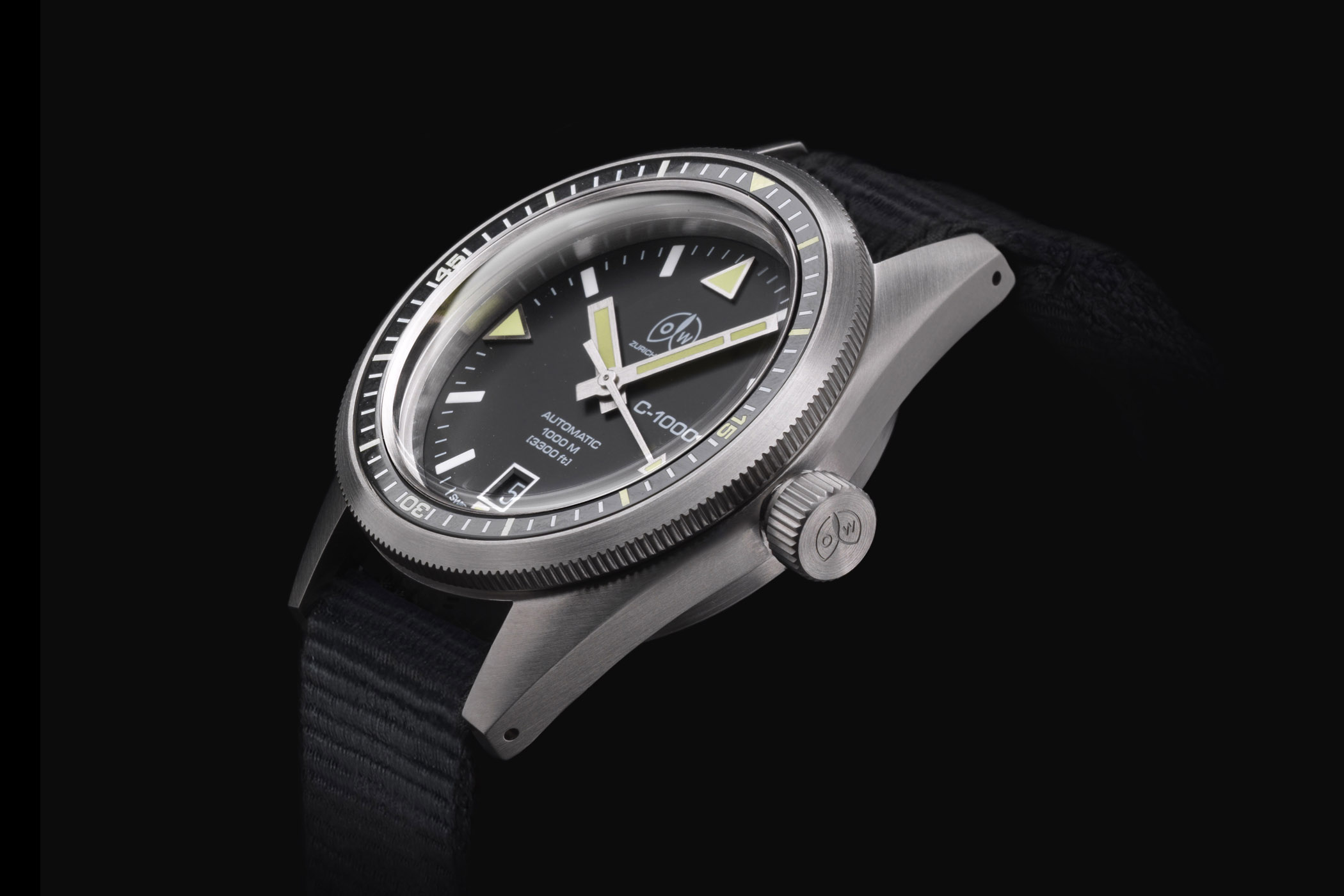 On top of the case is a traditional but necessary 60-minute unidirectional bezel, made of brushed stainless steel with a mineral insert, in order to measure dive times. The dial of the OW C-1000 also shares this 1960s tool watch inspiration, with a combination of triangular applied indexes in cream, painted baton markers for the hours and simple yet legible hours and minutes, hands – all of that to provide great contrast and legibility in daylight or dark conditions. A date window is positioned at 6 o’clock. 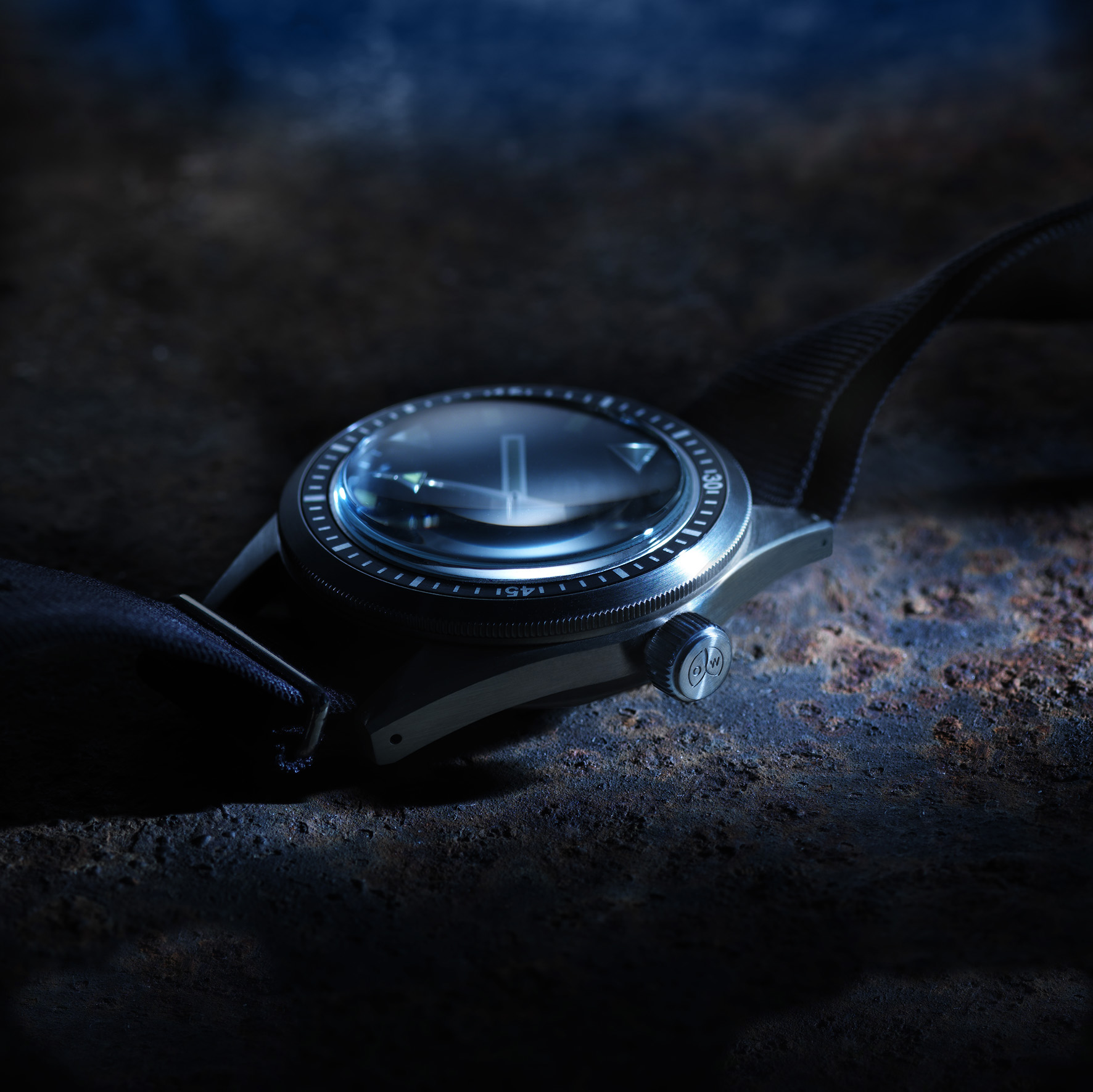 Inside this tribute to Caribbean 1000 is a modern yet robust ETA 2824 movement, tested in 5 positions, and which is equipped with an Ollech& Wajs Zurich 1956 engraved main plate and OW machined rotor.

Two models will be available, only differentiated by their strap/bracelet. First is the OW C-1000, mounted on a black Nylon RAF strap and priced at CHF 1,456. Second is the OW C-1000 S, which comes with a new, fully brushed bead-of-rice stainless steel bracelet, reinforcing the vintage look of the watch. This second version is priced at CHF 1,596.