The figures speak for themselves: over the last 30 years, scientists calculate that 50% of the world’s coral reefs have died and without direct action could be extinct in 80 years. Coral reefs are now the most endangered ecosystems on the planet and their extinction would mark the first time humanity has faced the loss of an entire ecosystem. The upside of these gloomy facts is that coral can be saved. Oris has taken a special interest in different foundations that are restoring the life of coral reefs by allocating a percentage of sales generated with these limited edition watches. Last year, Oris supported the Reef Restoration Foundation with the Great Barrier Reef watch. The partnership with Coral Restoration Foundation (CRF) dates back to 2014. This year, Oris renews its commitment to CRF and in January 2020 released the Carysfort Reef Limited Edition, the brand’s first watch in solid gold. Today, a second Carysfort Reed model is released in stainless steel. The watch is a limited edition of 2,000 pieces and, like the gold model, is based on the robust Aquis GMT diver with specific design features to celebrate its commitment to CRF. 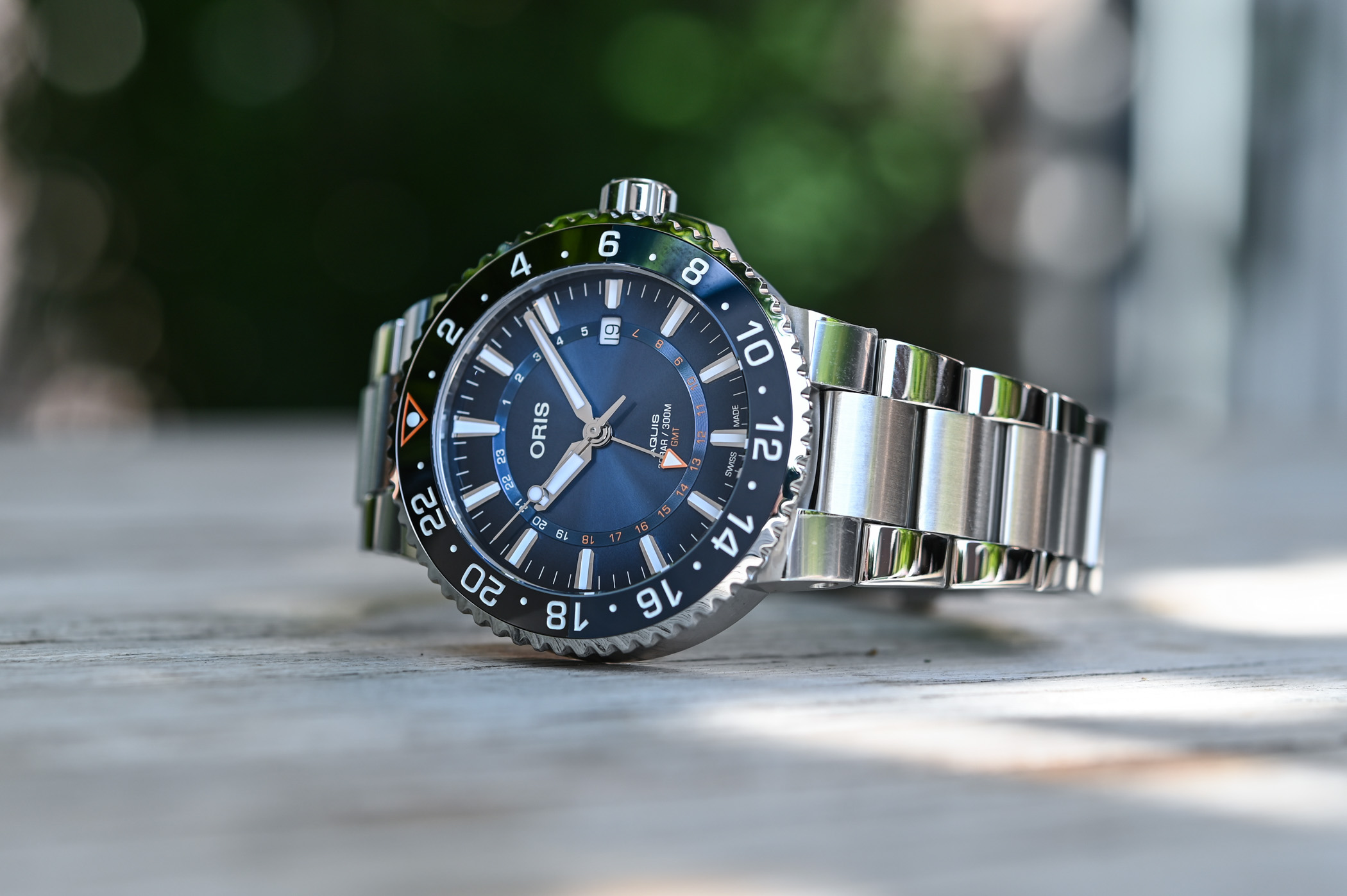 Oris and the ocean

With its reputation for practical underwater tool watches, Oris has embarked on a mission to raise funds and create awareness for different environmental projects related to our oceans and freshwater lakes. In the past year alone we’ve seen editions like the Oris Ocean Trilogy, the “Clean Ocean” Edition to support the removal of plastic from the sea and even the Lake Baikal model to improve the health of the world’s largest freshwater lake on Earth.

Coral reefs have been around for 500 million years but they could disappear by the end of this century. Currently the most threatened habitat on Earth, coral reefs are the backbone of life in the oceans. Corals are sometimes mistaken as rocks or as plants. However, corals are classified as animals and use their small tentacles to capture their food from the water although they also obtain energy from photosynthesis – which explains why they live in shallow waters. Corals are made up of millions of tiny soft-bodied polyps that secrete a hard outer skeleton of limestone and attach themselves to the seabed. Coral reefs are not just vital ecosystems, they protect coastal areas by reducing the power of waves and provide habitats and support for 25% of all marine fish species. When corals are stressed by rising ocean temperatures and acidification, they turn white. This phenomenon is known as coral bleaching and can kill entire coral reefs. Not only does this affect the life of marine species, it affects all of us because corals keep oceans healthy and oceans produce 70% of the world’s oxygen.

The prospect of seeing yet another species go the way of the dinosaur prompted the creation of Coral Restoration Foundation (CRF). Based in Key Largo, Florida, CRF’s mission is to reverse the damage done to the Florida Reef Tract. The foundation grows corals in an offshore nursery and then ‘outplants’ them in selected sites. One reef in particular, the Carysfort reef, has been singled out for the latest Oris watch. According to  Martha Roesler, chief development officer at CRF, Carysfort reef was a popular spot for the early recreational dive industry and is where the world’s first underwater colour photograph was taken.  To date, the CRF has repopulated the Carysfort reef with 25,000 corals and should reach 30,000 by the end of 2020.

The Oris Carysfort Reef is based on the Aquis GMT, a robust diver for travellers introduced in 2019 and the first Aquis to appear with a GMT complication that can track up to three different time zones. The regular Aquis GMT collection has a predominantly black and blue colour scheme; the Craysfort Reef is also black and blue, but with a lighter blue dial and a two-tone bezel. 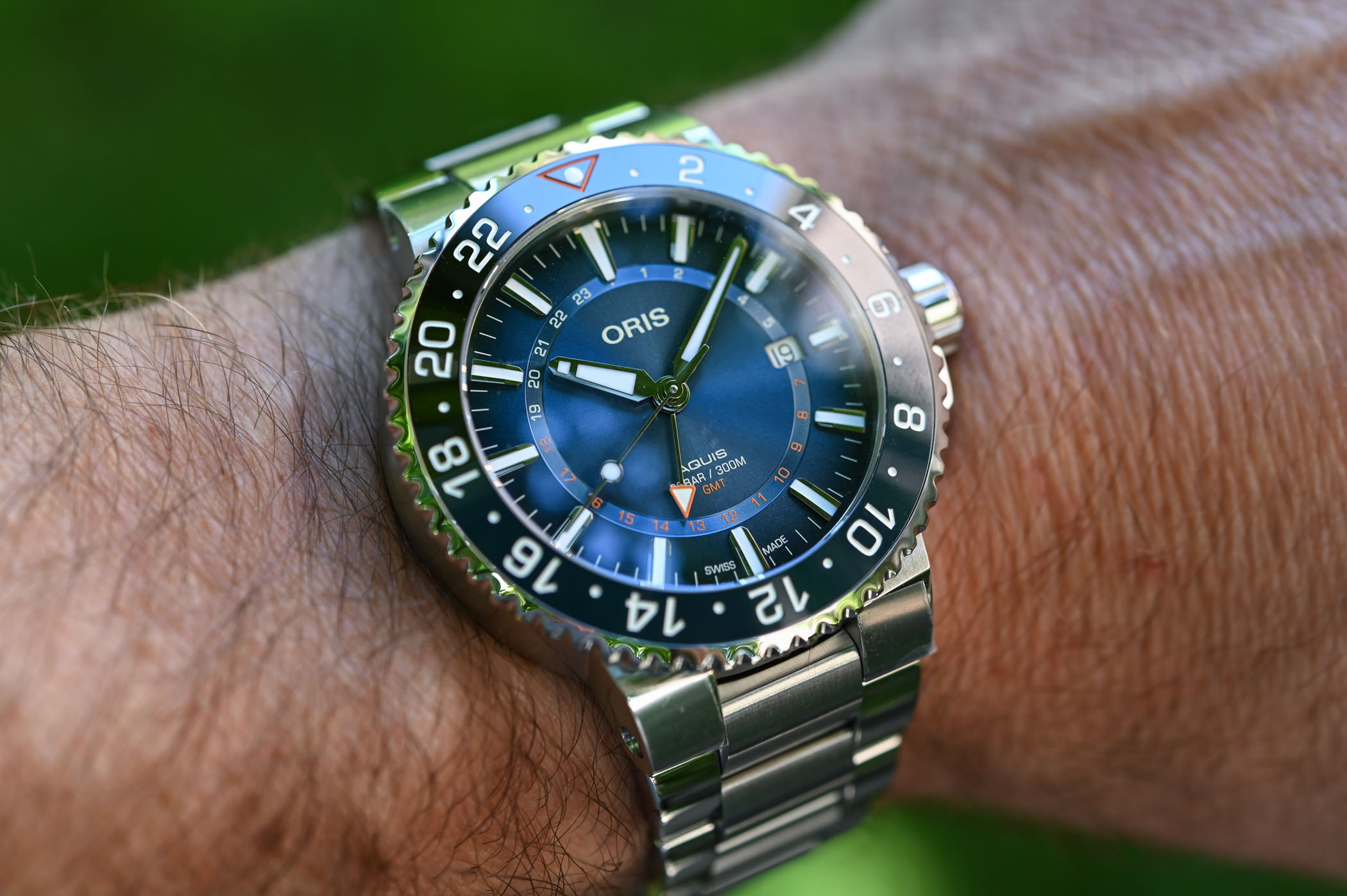 The steel case has a diameter of 43.5mm (50mm lug-to-lug and 14mm thick) and features brushed and polished finishes. The notched two-tone black and blue ceramic insert on the bezel, first seen on the gold model released in January, has a laser-engraved 24-hour scale filled in white. Like a day/night indicator, the black corresponds to night-time hours and the blue for daytime.

Unlike the regular Aquis GMT models in the collection, the Craysfort Reef has an orange triangle at 12 o’clock to house the luminous dot, a colour scheme that is echoed on other details of the dial. Protected with crown guards, the crown is screwed down and the caseback sealed to offer water-resistance of 300 metres. 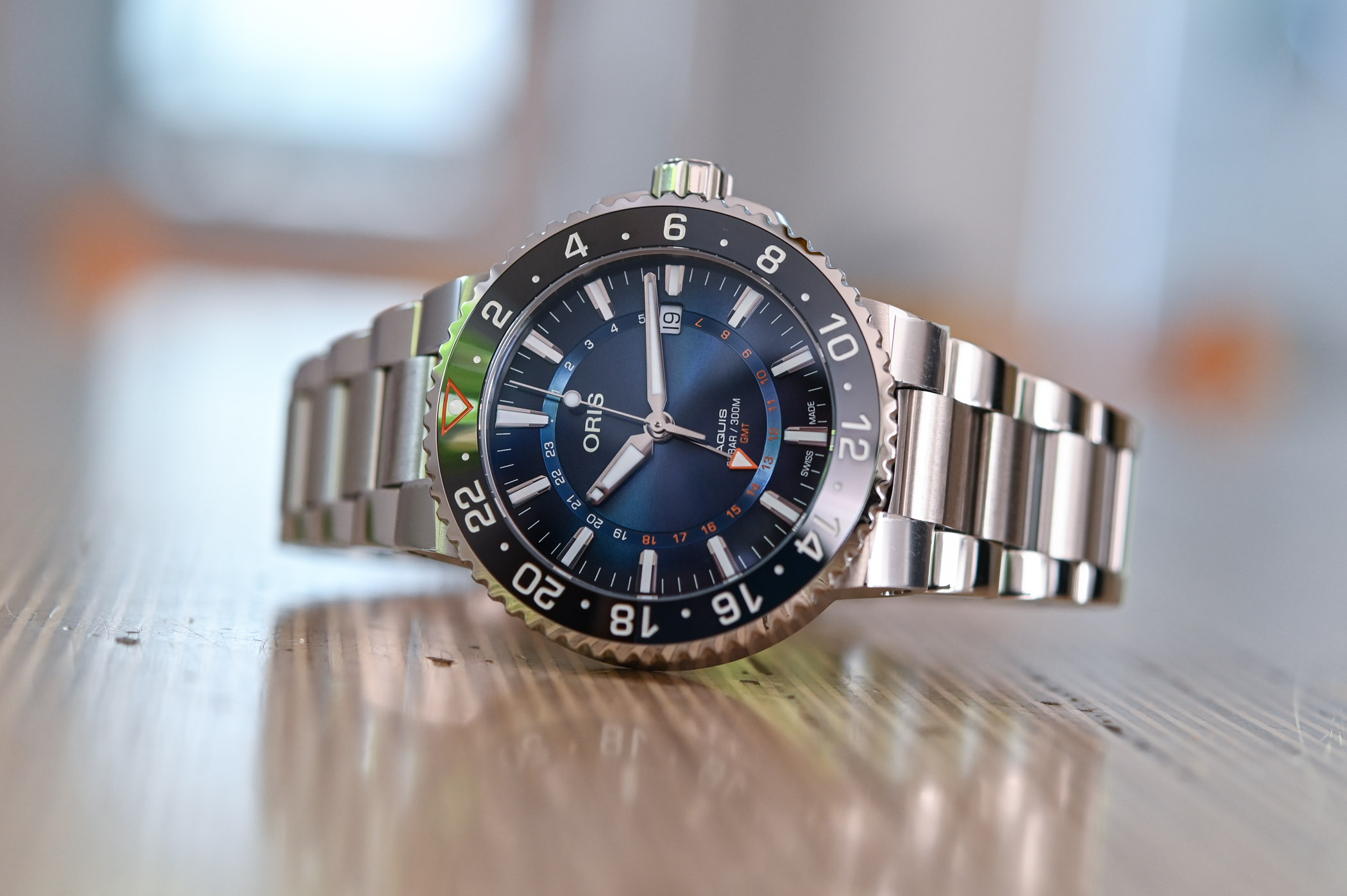 The dial is also different from regular Aquis GMT and flaunts a blue gradient dial evoking the shallow waters that are home to Florida’s coral. Another difference is the slightly recessed and snailed 24-hour GMT scale, which is now represented with a combination of white (19-5) and orange (7-18) numerals to match the central orange GMT hand and the GMT inscription on the dial. Plenty of luminescent material, painted on all the four central hands (hours, minutes, GMT and seconds) and on the indices, makes reading the watch underwater or at night a cinch. 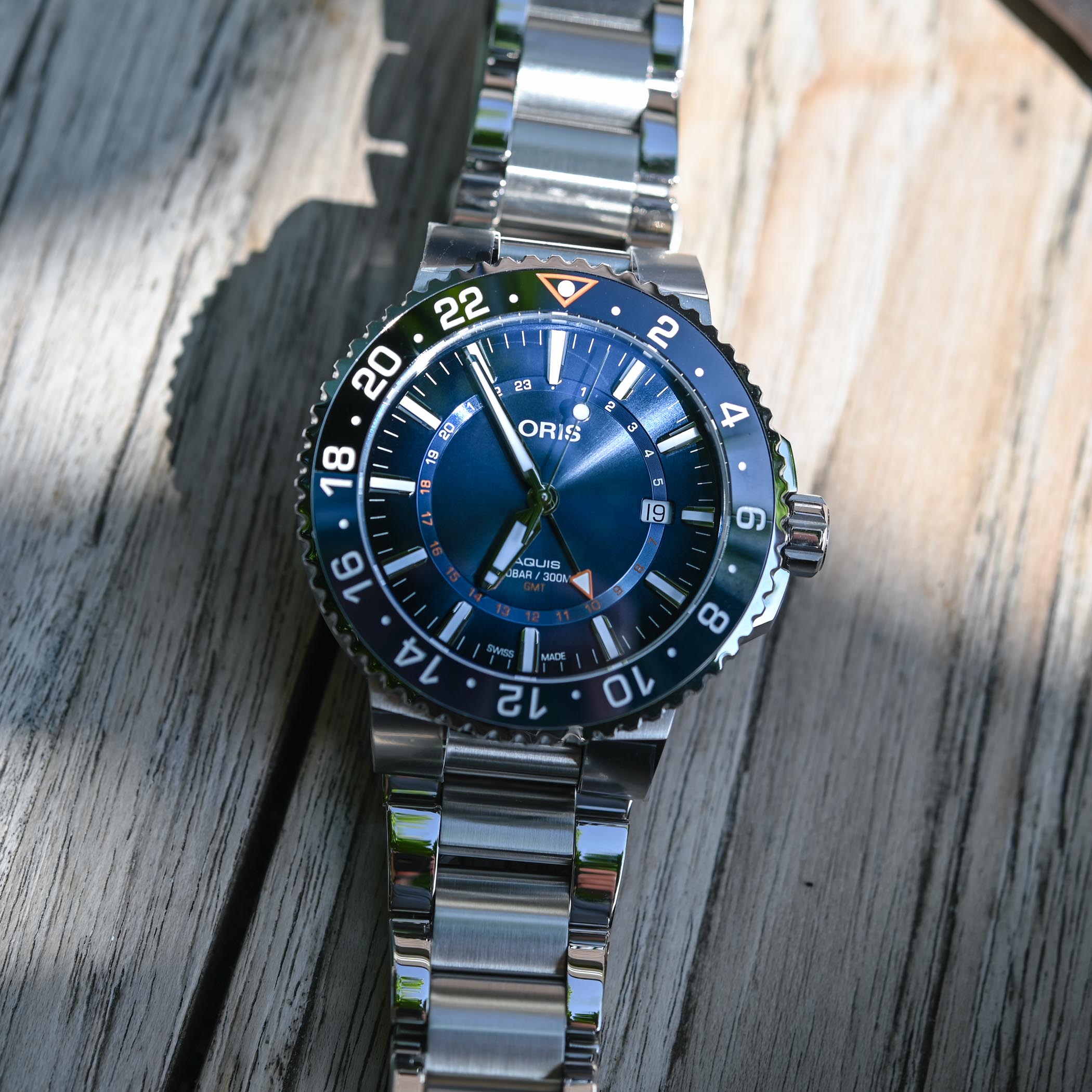 The three possible time zones readings function as follows: local time can be set using the standard hour hand; home time using the central GMT hand with the orange tip; and a third time zone using the bidirectional GMT bezel in combination with the GMT hand. There is also a date window at 3 o’clock.

The screwed caseback is decorated with an engraving of coral specimens found in Carysfort Reef along with the limited edition number 0000/2000. Inside is calibre 798, an automatic movement beating at 28,8000vph with a 42-hour power reserve based on the well-known Sellita SW 330-1. 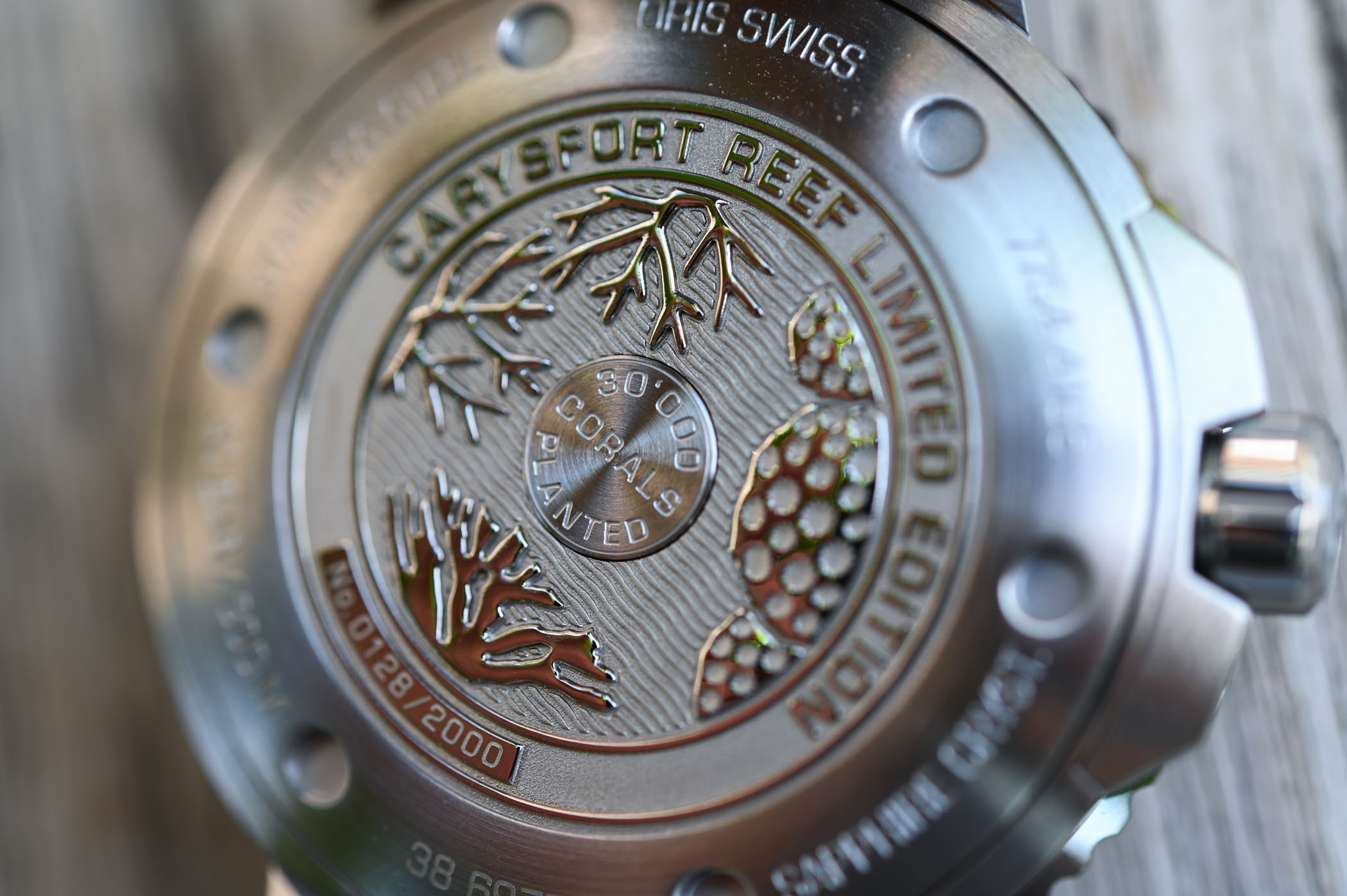 The Oris Craysfort Reef is limited to 2,000 pieces and comes in special box made from sustainable algae. The watch can be ordered with a stainless steel bracelet or an orange rubber strap, both with a steel security folding clasp with an extension system. The watch is now available and retail prices are as follows: CHF 2,700 for the model with a steel bracelet, CHF 2,500 with a rubber strap.