Today Oris launches a new model in its Carl Brashear commemorative collection, the third bronze watch honouring U.S. Navy Diver Carl Brashear’s indomitable spirit – a watch that is once again based on the Divers Sixty Five design, with multiple evolutions to make it unique. Not only is it the most compact bronze Carl Brashear model to date, but it is powered by a brand-new movement with small seconds, based on Oris’ new in-house calibre with a mighty five-day power reserve, resilience to magnetism and a 10-year warranty. Meet the new Oris Carl Brashear Calibre 401 Limited Edition. 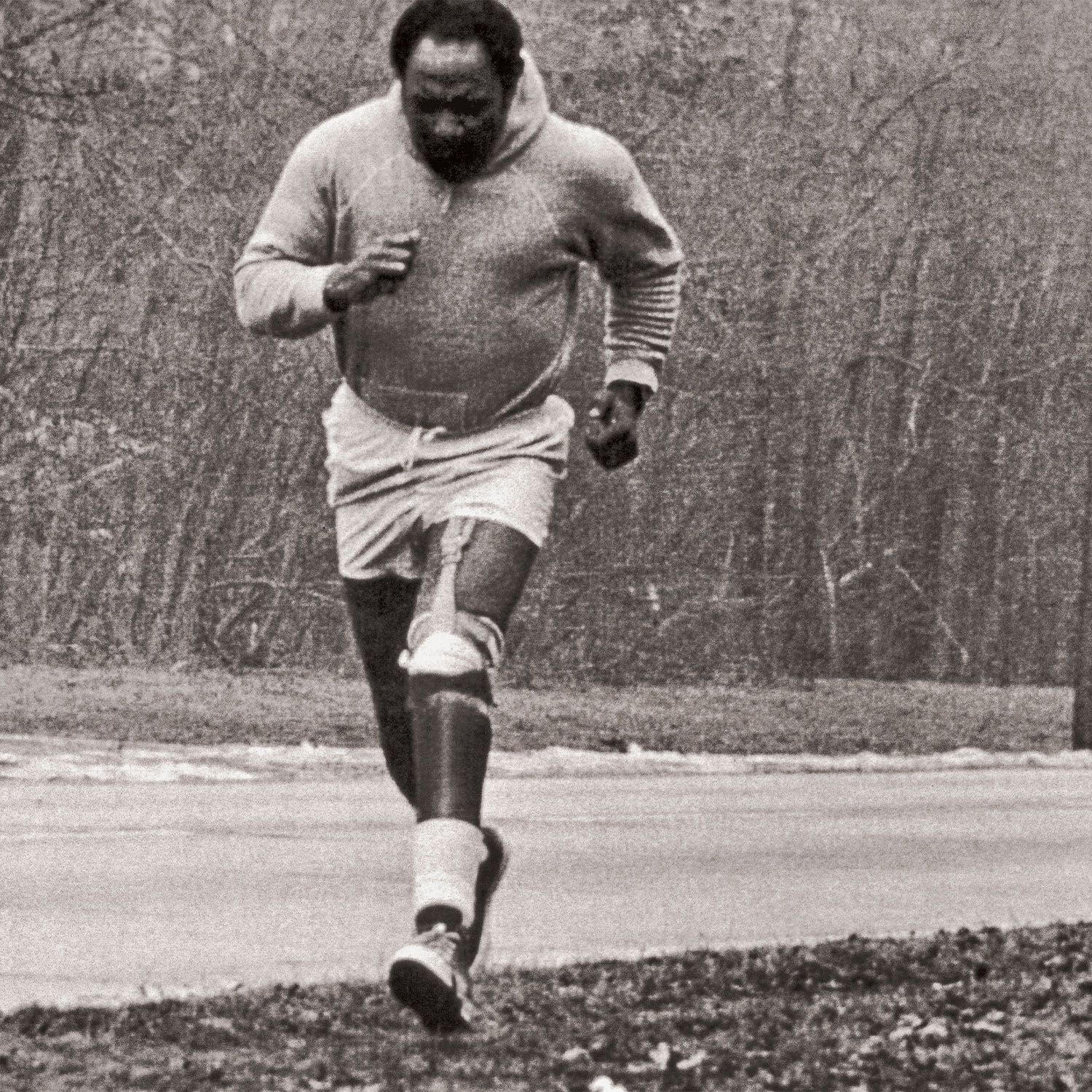 Celebrating the life and times of Carl Brashear, the first African American diver in the U.S. Navy and its first amputee Master Diver, the first 42mm Oris Carl Brashear time-and-date made a splash in 2016 with its attractive bronze case, a first for the brand. It was followed two years later by the 43mm bronze Carl Brashear Chronograph. As a watch designed to honour the memory of the famous Afro American diver, the Sixty-Five vintage-style diver watch was a natural fit.

The third Carl Brashear watch shares many features with the former models but boasts a significant upgrade in the movement department. Instead of relying on outsourced movements (usually supplied by Sellita), the new model is the first watch fitted with the Oris Calibre 401, an automatic with small seconds.

As you will remember, Oris introduced its Calibre 400 in October 2020, a powerful automatic movement with a five-day power reserve and a 10-year warranty. Calibre 400 is a proprietary manufacture movement, meaning that although it was developed entirely in-house by COO Beat Fischli and his team, it is produced by a network of suppliers with state-of-the-art industrial techniques. Estimated to be more accurate than a chronometer (-3 to +5 seconds a day), the Calibre 400 has twin barrels capable of storing five days (120 hours) of power, a silicon escapement to counteract magnetism and a newly developed oscillating mass based on a low-friction, slide-bearing system that only winds in one direction to reduce wear and tear over the long run. The first watch to benefit from the new automatic movement was the 43.5mm Aquis Date model, also released at the end of October 2020.

Less than three months after the launch of its new automatic movement, Oris releases the second movement from its family of automatics. The difference between the two movements is that Calibre 401 features small seconds at 6 o’clock, instead of a central seconds.

Bronze was a natural choice for the case. Not only is it a material that recalls the diving helmets worn by Carl Brashear during his career as a U.S. Navy Master Diver, but bronze has also become a trendy metal for watch cases. The other good news is that the case size of the Carl Brashear Calibre 401 is smaller than the earlier models. Coming in at a compact 40mm, this reduced diameter will please many fans. The 100m water-resistant bronze case with its screw-in crown features the same sandblasted unidirectional rotating bronze bezel with the scale in relief. The caseback is sealed and features an engraving of Carl Brashear’s diving helmet and his inspirational words: “It’s not a sin to get knocked down, it’s a sin to stay down.” 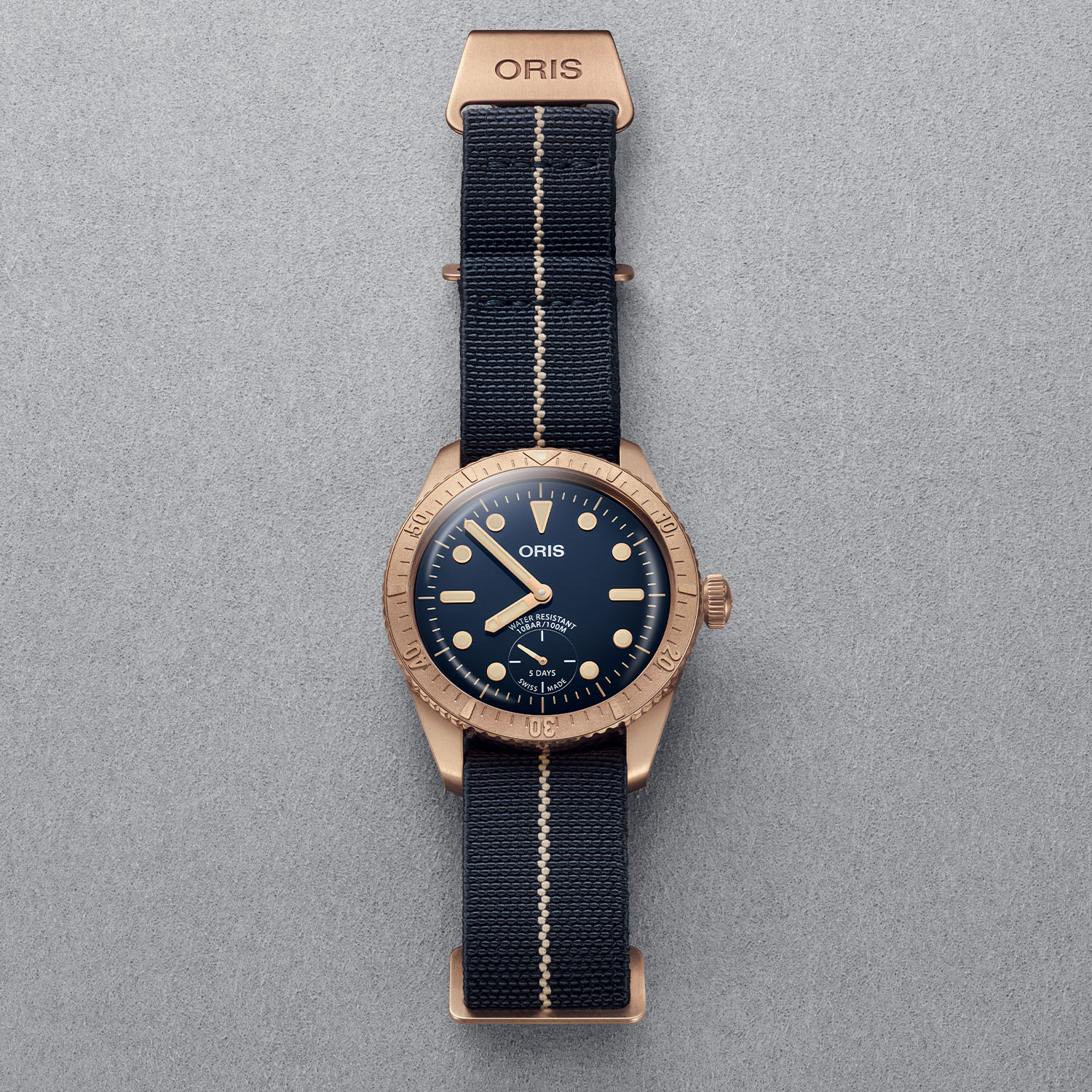 Inspired by Carl Brashear’s career in the U.S. Navy, the dial is a navy blue colour with a gilt minute track and large golden indices and hands filled with light old radium Super-LumiNova to enhance the vintage vibe. The small seconds counter is placed at 6 o’clock, and its hand is also treated with lume. Unlike the other two models, the inscription WATER RESISTANT 10BAR/100M has been curved to follow the curvature of the small seconds sub-dial. There is also an allusion to the new movement’s 5-day power reserve inscribed in white inside the small seconds sub-dial. 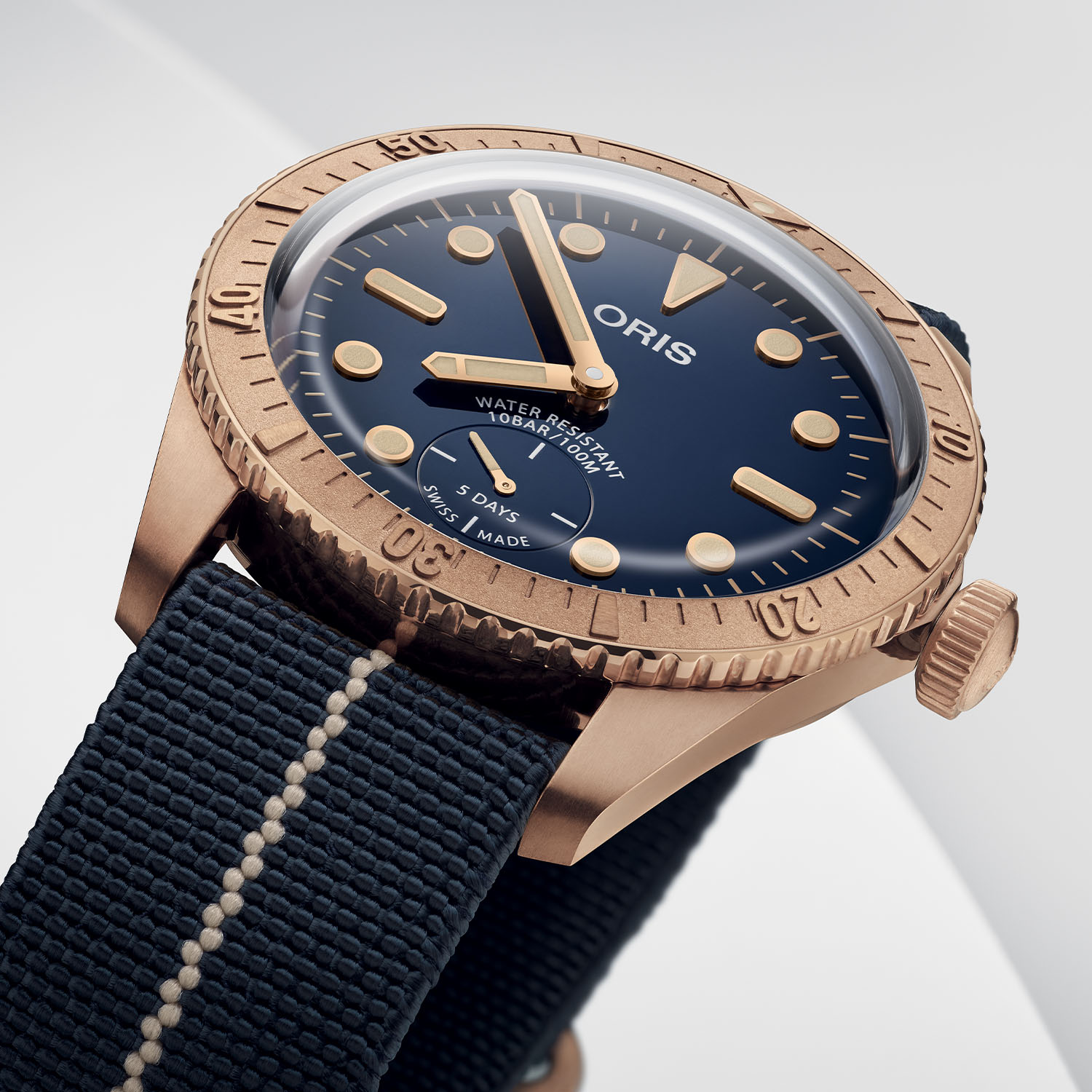 Another distinguishing feature is the matching woven strap in navy blue with a golden line down its centre. Custom-designed and handcrafted by Erika’s Originals, the woven nylon webbing strap is fitted with a bronze buckle. 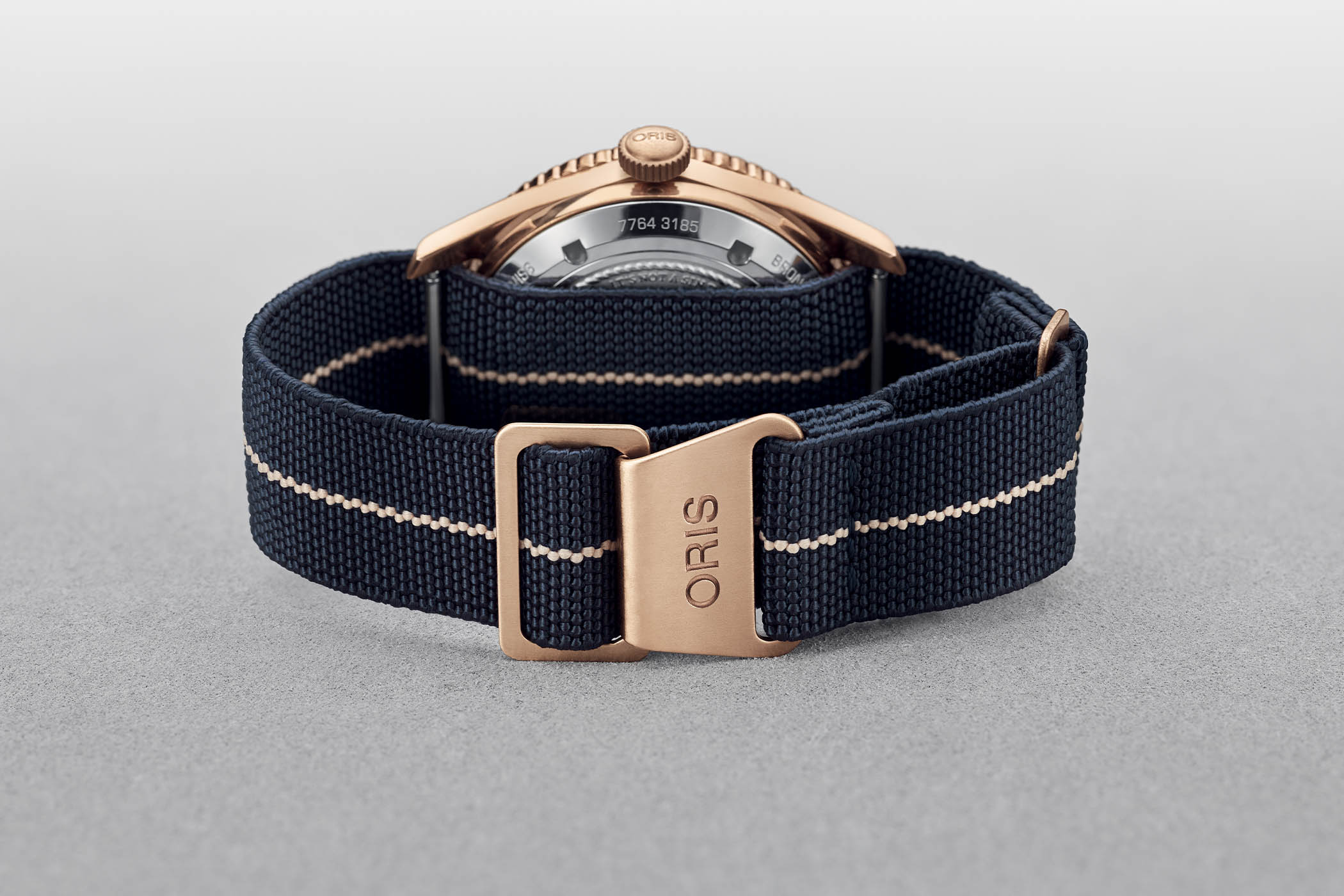 The Oris Carl Brashear Calibre 401 is limited to 2,000 pieces and delivered in a special presentation box. Its retail price is CHF 3,900, and the watch is now available.

More information and orders at Oris.ch.