Norqain is a young watch brand, and even though it launched only 2 years ago, it is already well-established and has built a comprehensive collection of sports/adventure watches. Well-executed and nicely designed models are proposed, all powered by mechanical movements (until now supplied by Sellita). Today, the brand moves one step further in its quest for independence, with a new watch suitably named Independence 20, and featuring for the first time a manufacture movement by Kenissi. 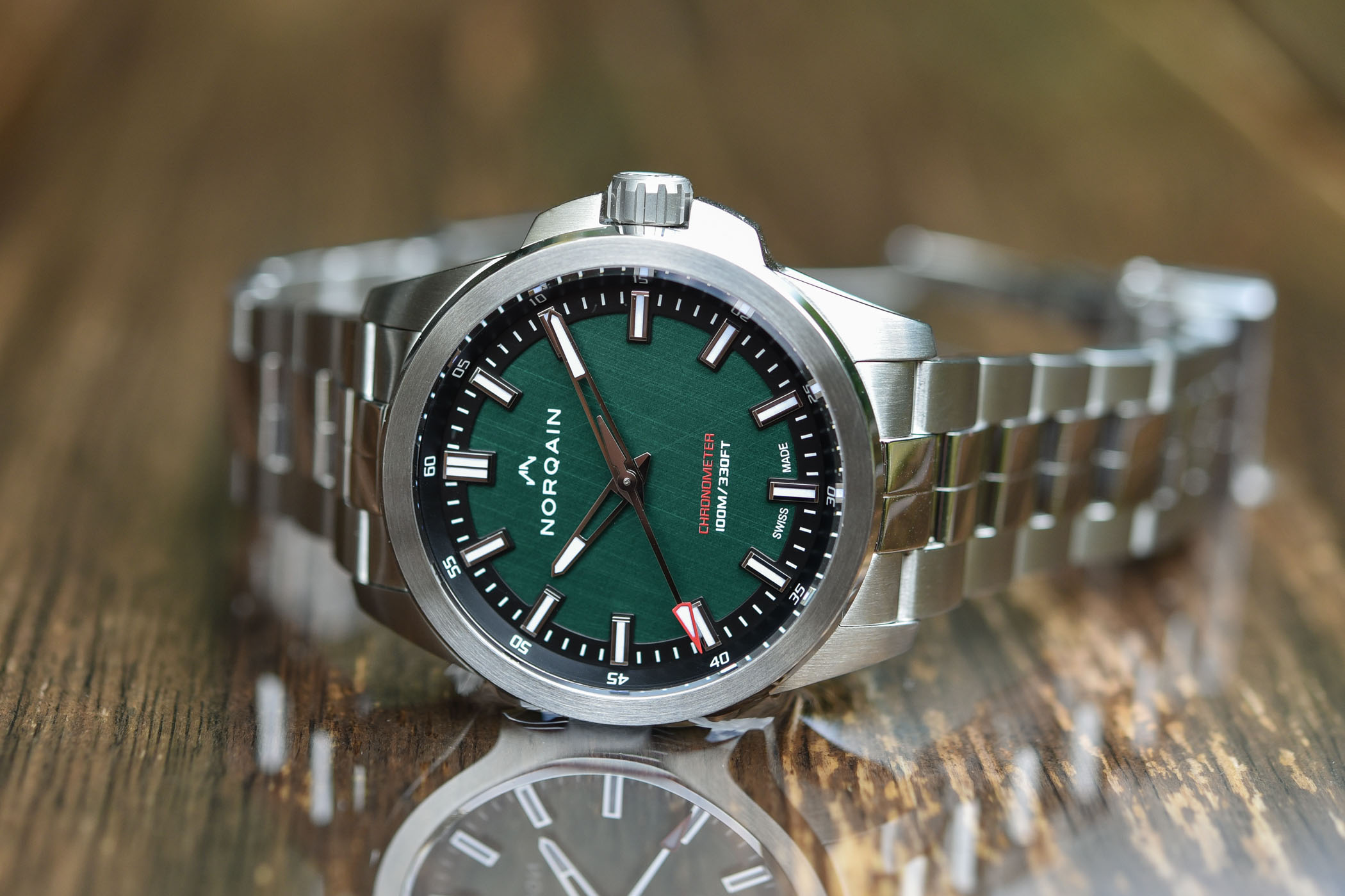 This new era for Norqain doesn’t come as a surprise, since we already announced in early 2020 that the brand signed a partnership with Kenissi for delivery of higher-end movements. A recently created company, Kenissi is often presented as the industrial arm of Tudor. This movement manufacturer offers a range of robust, high-performance calibres – 3-hand, time-and-date and GMT. It was created to produce movements for Rolex’s sister company and for Breitling. In 2019, Chanel announced it had taken a 20% stake in the company too. Kenissi is currently based in Geneva but will move to Le Locle in 2021/2022 where a building (currently under construction) will be shared by Tudor and Kenissi.

Norqain is now part of the restricted club of brands using Kenissi movements – together with Tudor, Breitling and Chanel. And to introduce this major step for the brand, Norqain decided to house the manufacture movement in an already existing collection, appropriately named “Independence”.

Norqain’s collection is based around 3 pillars, being the Freedom (a slightly vintage-inspired and sleek model), the Adventure (which is, as indicated by its name, a robust sports watch made for outdoor activities) and the Independence. This third collection represents the more modern and urban side of the brand, without denying the sporty, adventurous roots of the brand. 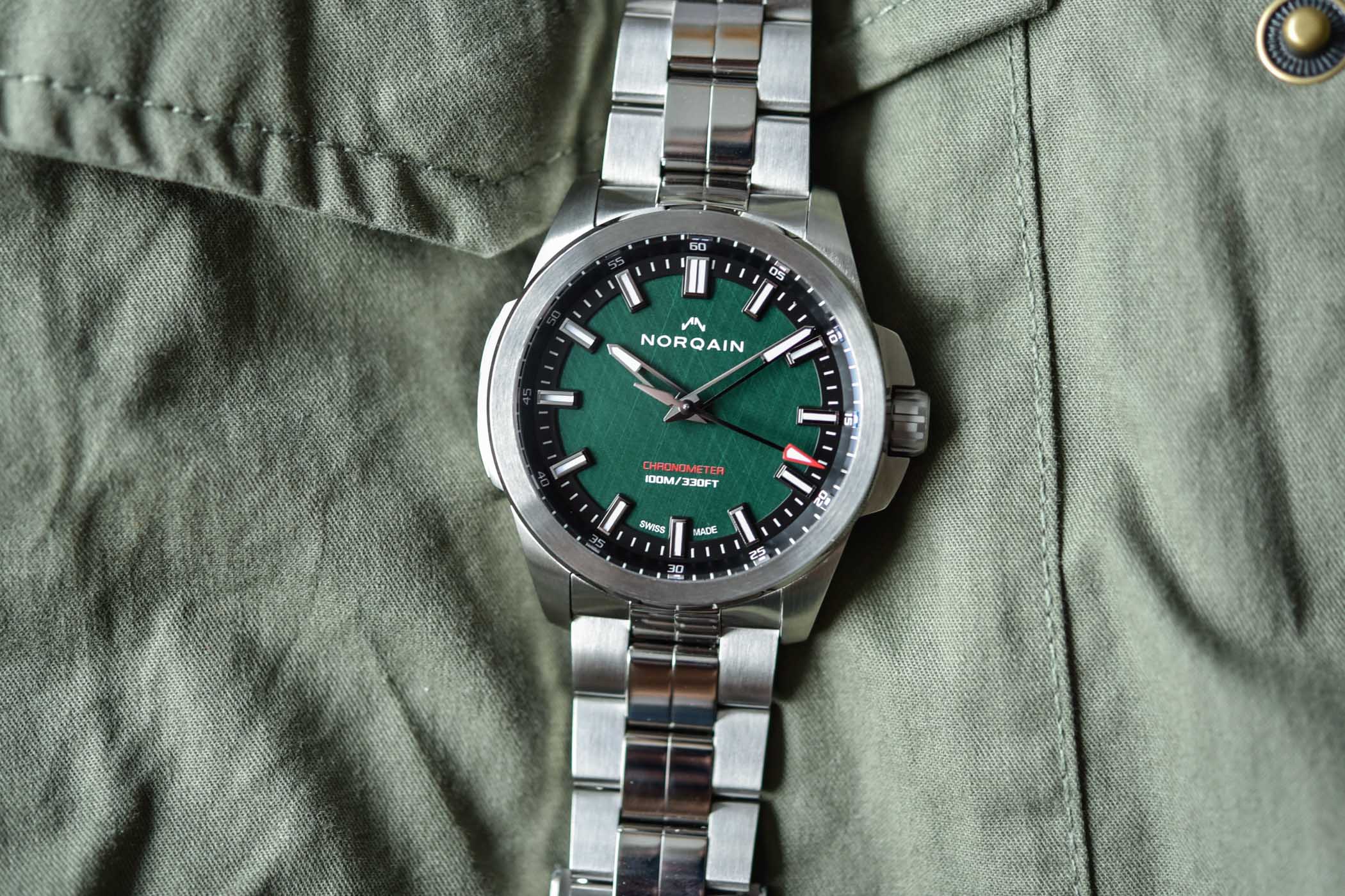 The case of this new Norqain Independence 20 is a robust, masculine and original design. At 42mm in diameter, it is one the larger side for a non-professional watch, a feeling reinforced by the shape of the watch itself. This is a model with a strong presence, yet with a true identity. Made of stainless steel, it is nicely executed and finished, with brushed surfaces on the lugs and bezel, polished accents and, nice touch, sandblasted recessed areas on the casebands. As with all Norqain timepieces, there’s a polished plate is on the left side of the case (here with the brand’s logo) but it can be personalised with an engraving of the wearer’s choice. Equipped with a bevelled sapphire crystal and a screw-down crown and caseback, the watch is water-resistant to 100m. 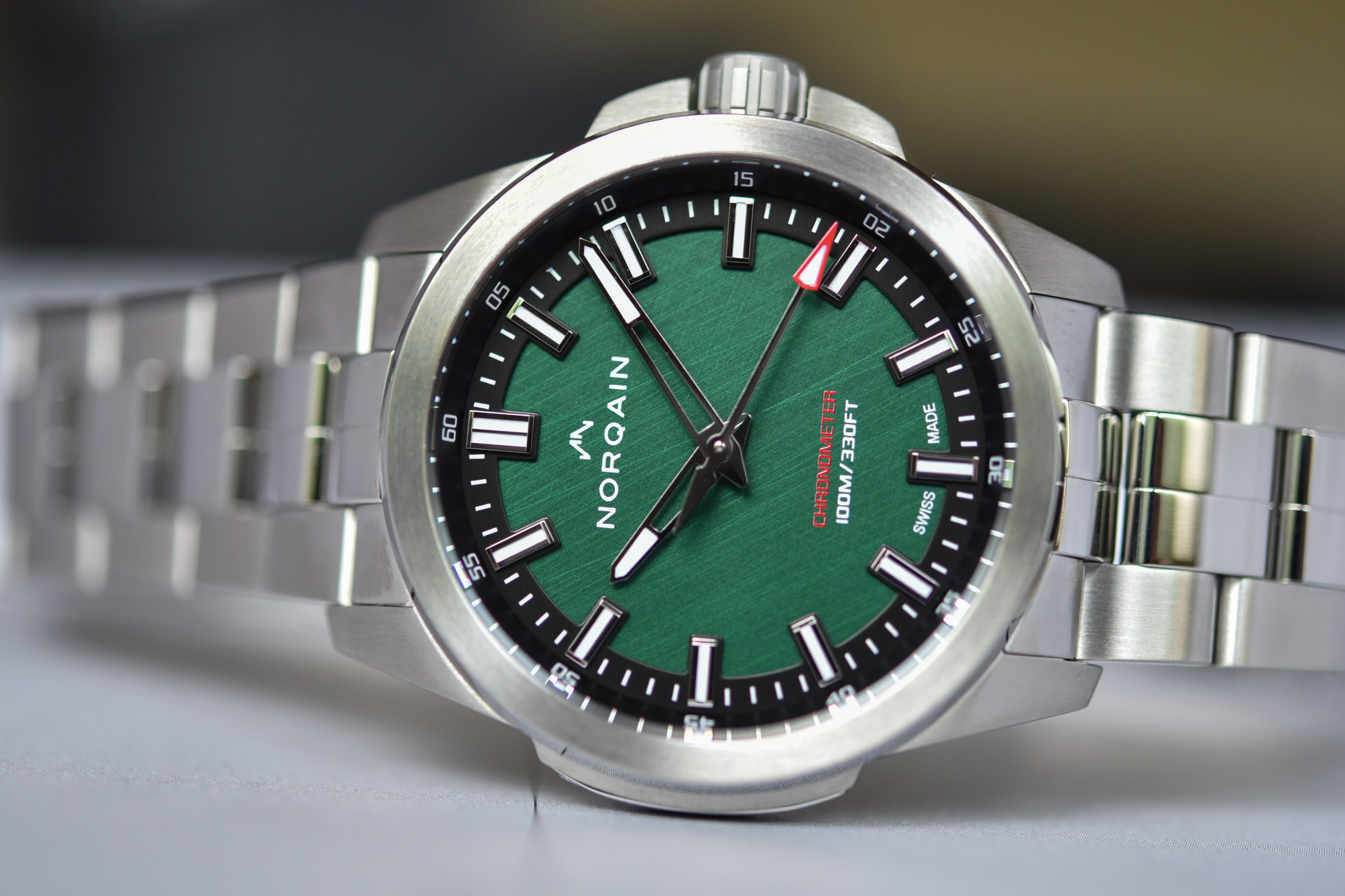 Equipped with a flat brushed bezel and large shoulders on each side, you could expect the Norqain Independence 20 to be a hefty watch on the wrist, however, the shape of the lugs has been thought with ergonimics in mind. As a result, the watch is well-balanced on the wrist and feels relatively compact. It is worn on a 3-link stainless steel bracelet with brushed and polished surfaces, closed by a solid folding clasp. A leather strap with curved end-links is also available, giving a more casual look to this sporty piece. 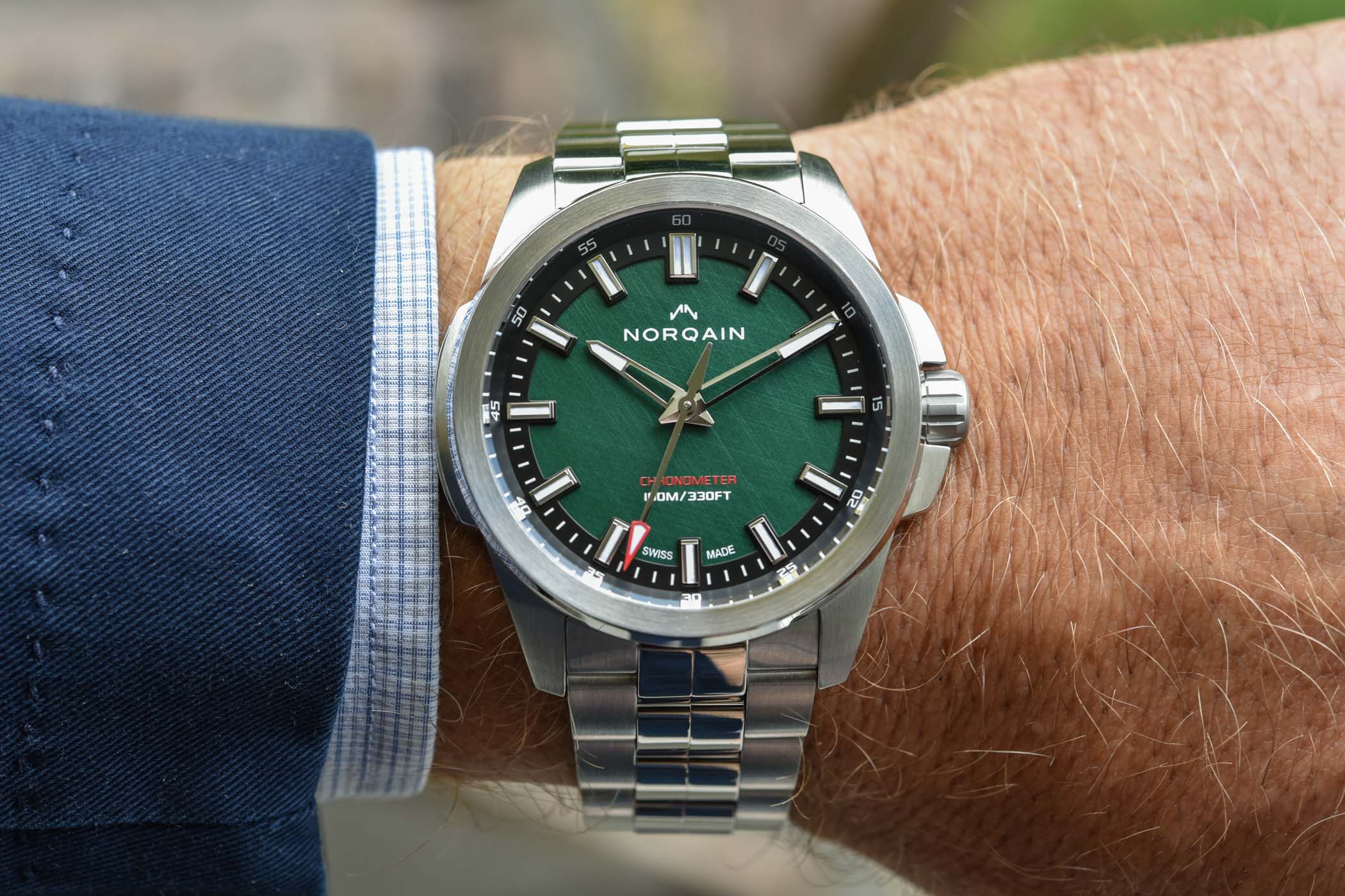 The same architectural look is used on the dial od this Norqain Independence 20, thanks to multiple layers. The dial features an inner flange with a 60-minute scale. Then, a black raised chapter ring is fixed on the periphery, to indicate the hours with large applied indexes, largely filled with Super-LumiNova. Finally, originality is provided by the centre plate, with its nice forest green colour, which has received a scratched decoration – this pattern is done randomly, so no two watches will look exactly the same. 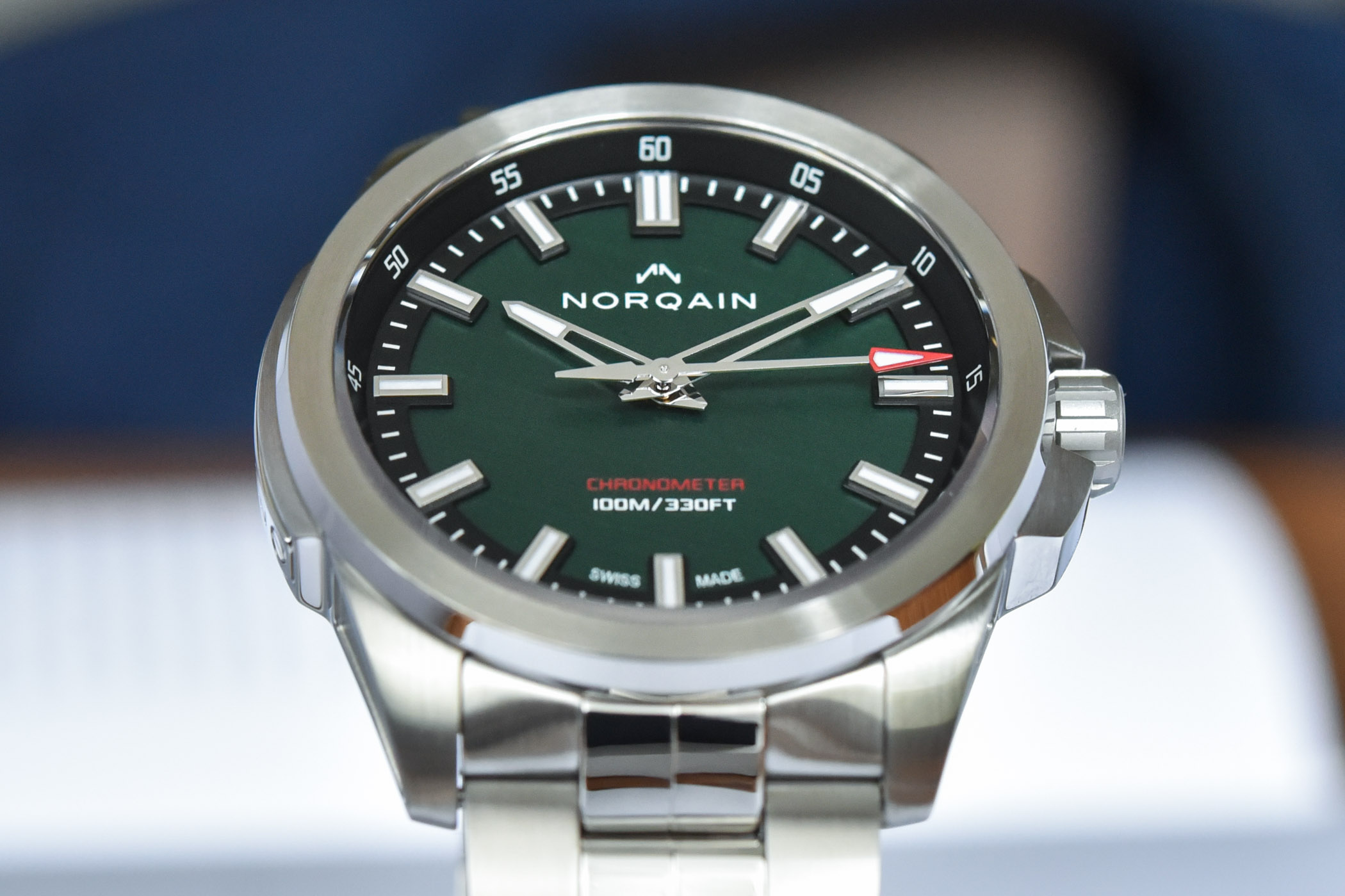 The result is visually very pleasant, with depth and subtle reflections. The green colour is both original without being intrusive, making this watch quite discreet. Time is indicated by large facetted and polished openworked hands, all filled with SLN – providing great contrast in daylight and powerful lume during the night. Red touches have been added too, on the seconds hand tip and for the “chronometer” inscription.

Under the screwed sapphire caseback is a movement that has a proven track record, since it is the same base as the one encased in Tudor’s Black Bay, Pelagos and North Flag models. Named here Calibre NN20/1, this Kenissi movement is a robust, powerful engine that was built with durability and precision in mind. Featuring a transversal balance bridge (for more stability of the escapement and more resistance to shocks), it is chronometer-certified by COSC. This automatic movement is also coming with a comfortable power reserve of 70 hours.

Displaying the hours, minutes and seconds, Norqain chose to exclude the date from this Independence 20 model. The movement is decorated in a clean, industrial way – just like Tudor, with matte blasted bridges – and features a personalised brushed rotor with the brand’s logo as well as the brand’s core values engraved on the bridge “Adventure – Freedom – Independence.”

The Norqain Independence 20 is a limited edition of 200 pieces. Note that the brand offers a four-year international warranty, which can be extended to five years if the owner registers to the Norqain Club. 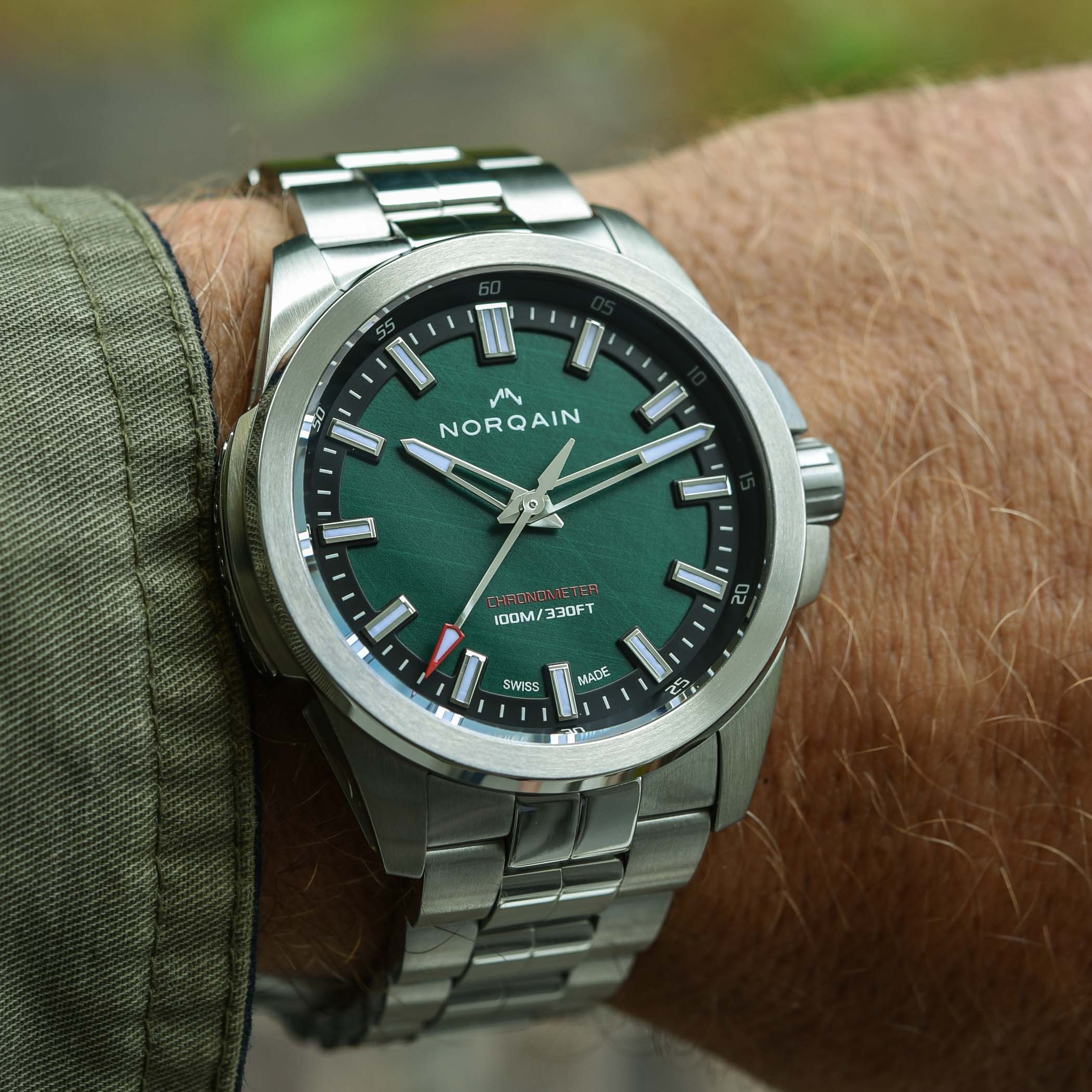 The Norqain Independence 20 will be priced at CHF 2,990 on steel bracelet and CHF 2,840 on leather strap – a quite accessible price strategy considering the overall built quality of the watch and the presence of Kenissi’s powerful and robust movement.

The watch can be ordered here, at www.norqain.com.