NOMOS is a rare breed of watchmakers as it’s independently run in Glashütte and a vertically integrated manufacture with an accessibly priced portfolio. This is a combination that you don’t see often these days. Earlier this year, the brand celebrated the 175th anniversary of watchmaking in Glashütte with several limited edition watches sporting white enamel dials – Ludwig and Lambda models. They were so well received that the dial designs and its high-end material were carried over to a pair of annual holiday watches in a men’s and women’s size, the Ludwig 38 and Ludwig 33 Duo. These new models are not limited and will also remain in the brand’s collection after the holiday season. 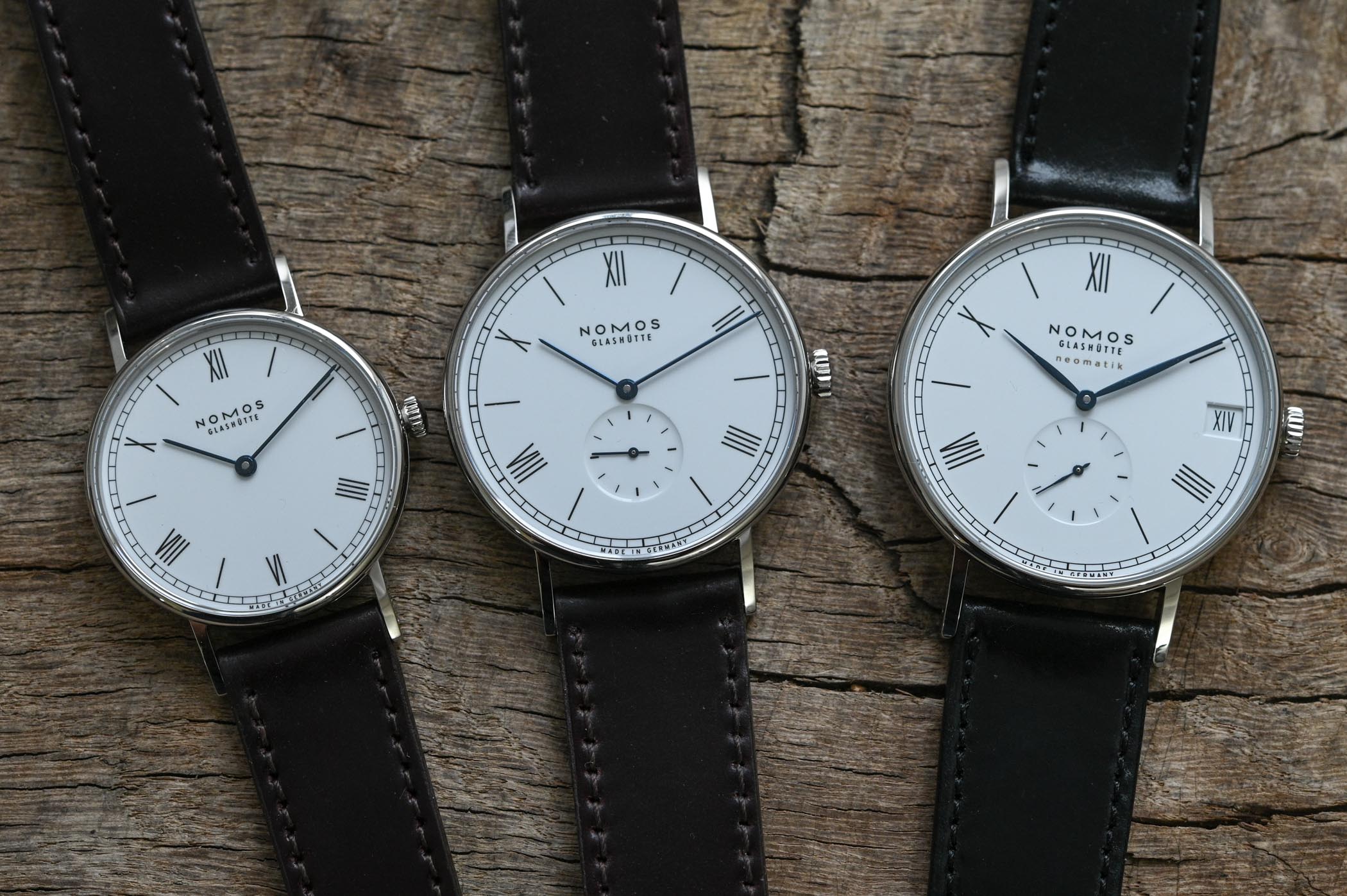 From left to right; the Ludwig 33 Duo, the Ludwig 38 and one of the watches that were launched earlier this year, the Ludwig Neomatik 41 Date, with enamel dial.

Also included here on the right, the handsome and more complex Lambda watch for the 175th anniversary of watchmaking in Glashütte

As the names imply, the polished stainless steel tripartite cases come in either 38mm or 33mm in diameter (well, 37.5mm and 32.8mm, but close enough). The smaller variant has a height of 6.5mm, while the larger model is slightly thicker at 6.7mm. Both models have sapphire crystals front and back, and the backs can be custom engraved for a special gift. The cases share the brand’s classic design language with a minimalistic approach and thin elongated, sloping lugs. Other than size, the cases are nigh identical and water resistance is limited to 30 metres, so they’re generally considered splash-proof only. The strap is a 19mm or 17mm Horween Genuine Shell Cordovan in brown with a steel pin buckle (for the 38mm and 33mm model, respectively).

The dials are the standouts with a brilliant enamel-like finish. To achieve this, a high-gloss lacquer is used in several layers and polished between each layer, resulting in light transparency with a white enamel aesthetic. Both dials have narrow, modern Roman numerals that replace the odd numerals with a simple, matching line. The Ludwig 33 Duo only displays hours and minutes only, while the Ludwig 38 has a recessed seconds sub-dial at 6 o’clock. The baton hands are thermally blued on both models. These dials are virtually unchanged from the original Ludwig pieces from 1992, inspired by Bauhaus watches from the 1930s (streamlined modernism). NOMOS is known for its consistent, instantly recognizable design language. 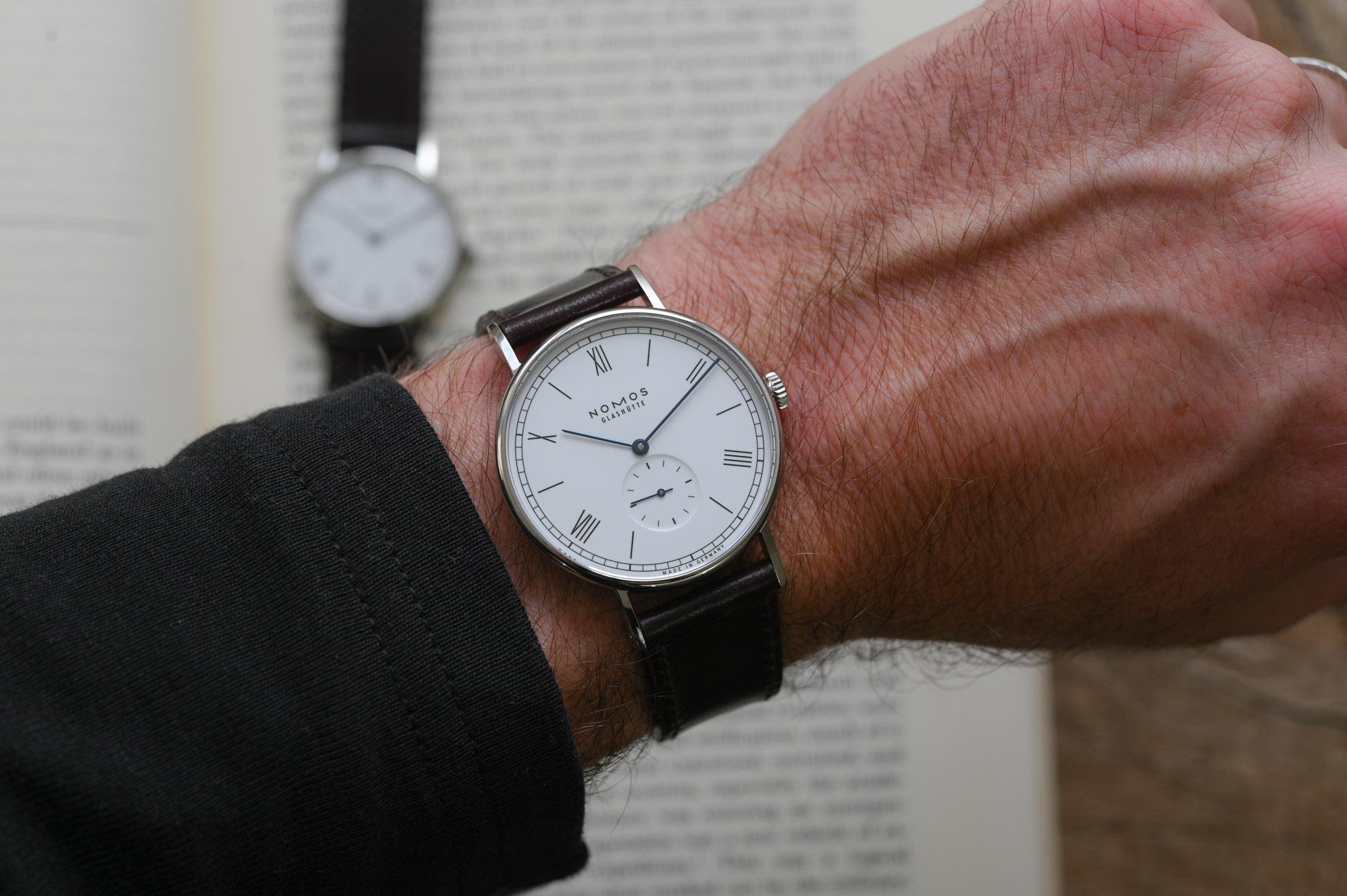 The Ludwig 38 Annual Holiday Watch, a compact yet masculine model with great elegance 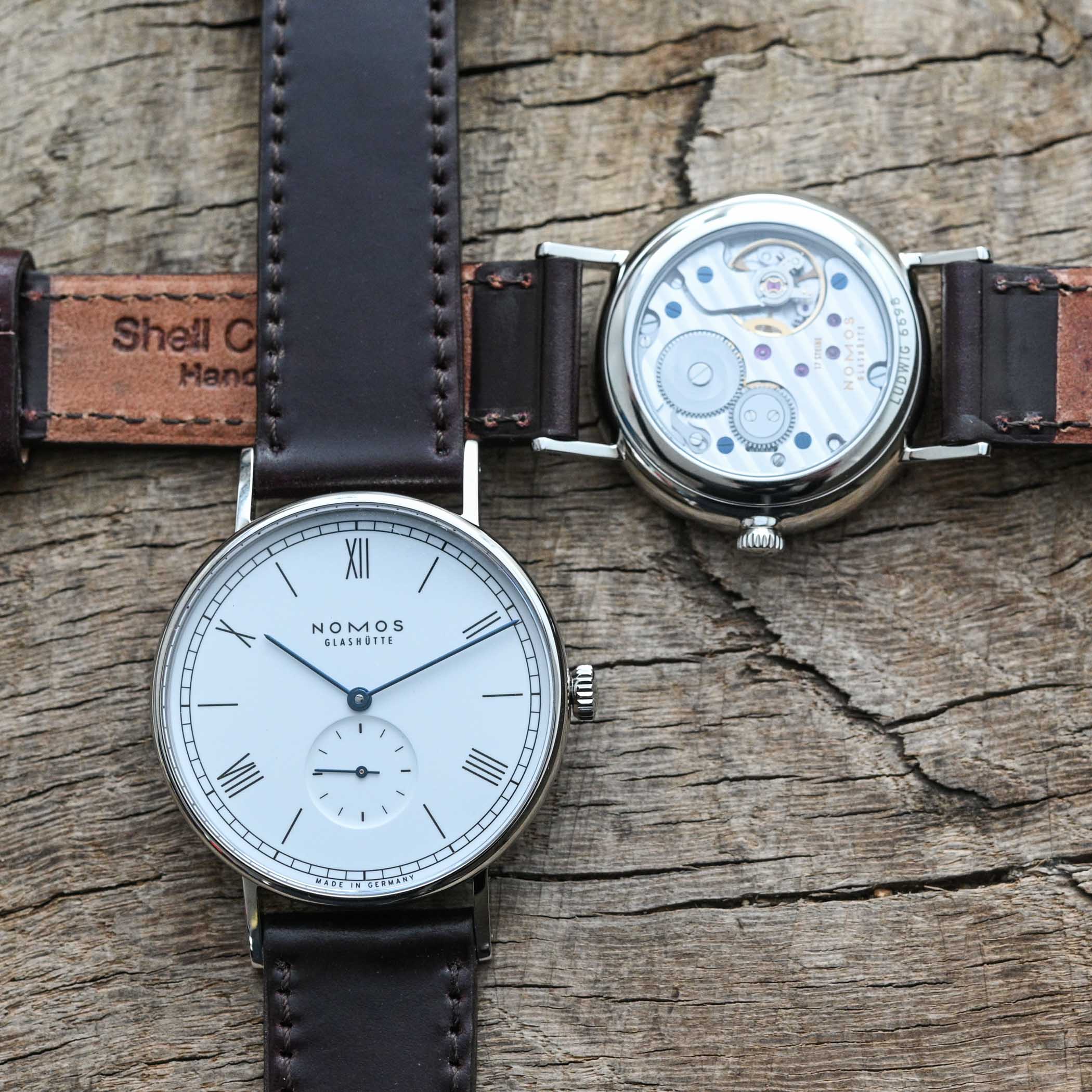 There are two in-house, hand-wound Alpha movements powering the watches, differentiated by the small seconds on the larger model. The Ludwig 33 Duo has the Alpha.2 calibre, while the Ludwig 38 has the Alpha – the brand’s original in-house movement, first used in 2005. Both have 17 jewels, beat at 21,600vph (3Hz) with a 43-hour power reserve. They’re adjusted in six positions with a chronometer level of accuracy. Seen from the exhibition case back, decorations include Côtes de Genève and a sunburst pattern on the ratchet and crown wheel.

The NOMOS Ludwig 38 and Ludwig 33 Duo are available as of November 16th and retail for EUR 1,060 or USD 1,380 for the smaller model and EUR 1,580 or USD 1,960 for the larger one. Impressive pricing for such refined watches with in-house, German calibres. For more information and to make a purchase, visit the NOMOS website.