Part of the reason MONOCHROME Watches exists in the first place is a deep-rooted love for independent watchmaking and the wonderful things some of the best watchmakers in the world can come up with. To us, that’s the very fabric of our existence and we try to provide a platform for these true masters of the craft. Even if you think everything has been done by now, there’s always something new to come when you least expect it. In the past few years, we’ve seen a lot of young and extremely talented watchmakers come up who, with the help of social media, try to make it on their own. Although success is not guaranteed, nor is it instant, we can’t help but be amazed by some of the stuff that’s being done around the world. So when we learned of two former A. Lange & Söhne watchmakers working on something very special, we jumped at the chance to find out more. And even though the duo of Johannes Kallinich and Thibault Claeys are still working on their first prototype, here’s an early look at the Kallinich Claeys Einser Zentralsekunde. 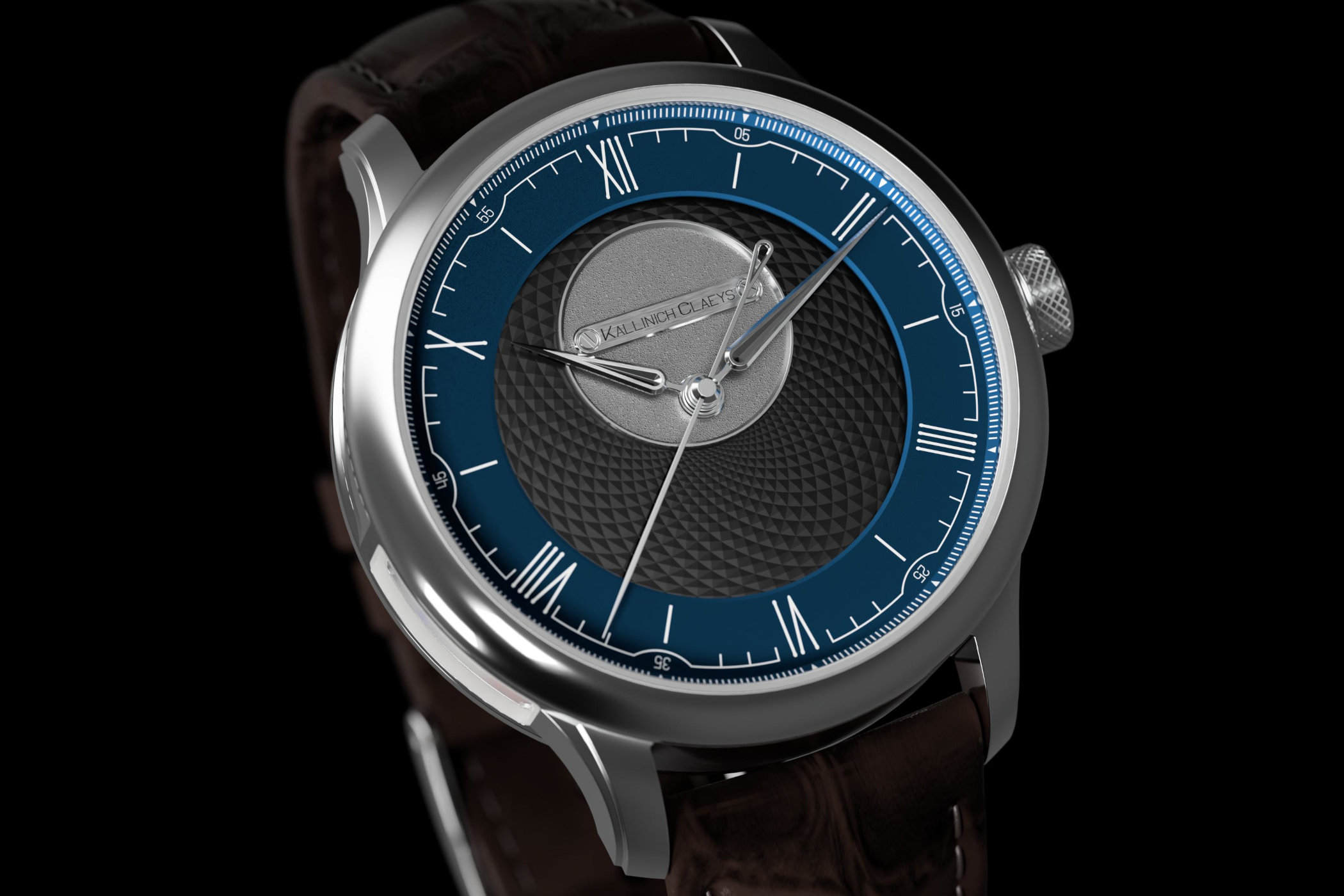 Both Johannes Kallinich and Thibault Claeys have an impressive resumé despite their young age. While both still in their twenties, the two have worked for A. Lange & Söhne for a number of years before embarking on their own. Thibault Claeys, of Belgian origin, studied watchmaking in Antwerp and primarily worked on the Lange 1815, doing finishing, construction, assembly et cetera. Johannes Kallinich, a certified Master Watchmaker, studied watchmaking in Dresden and started working for AL&S straight out of school. Among other things, he worked on chronograph watches, which are considered some of the most complex watches by A. Lange & Söhne. By the age of 24 he was promoted to head of the Lange 1 department, and subsequently was granted the opportunity to create his Meisterwerk, his Masterpiece. 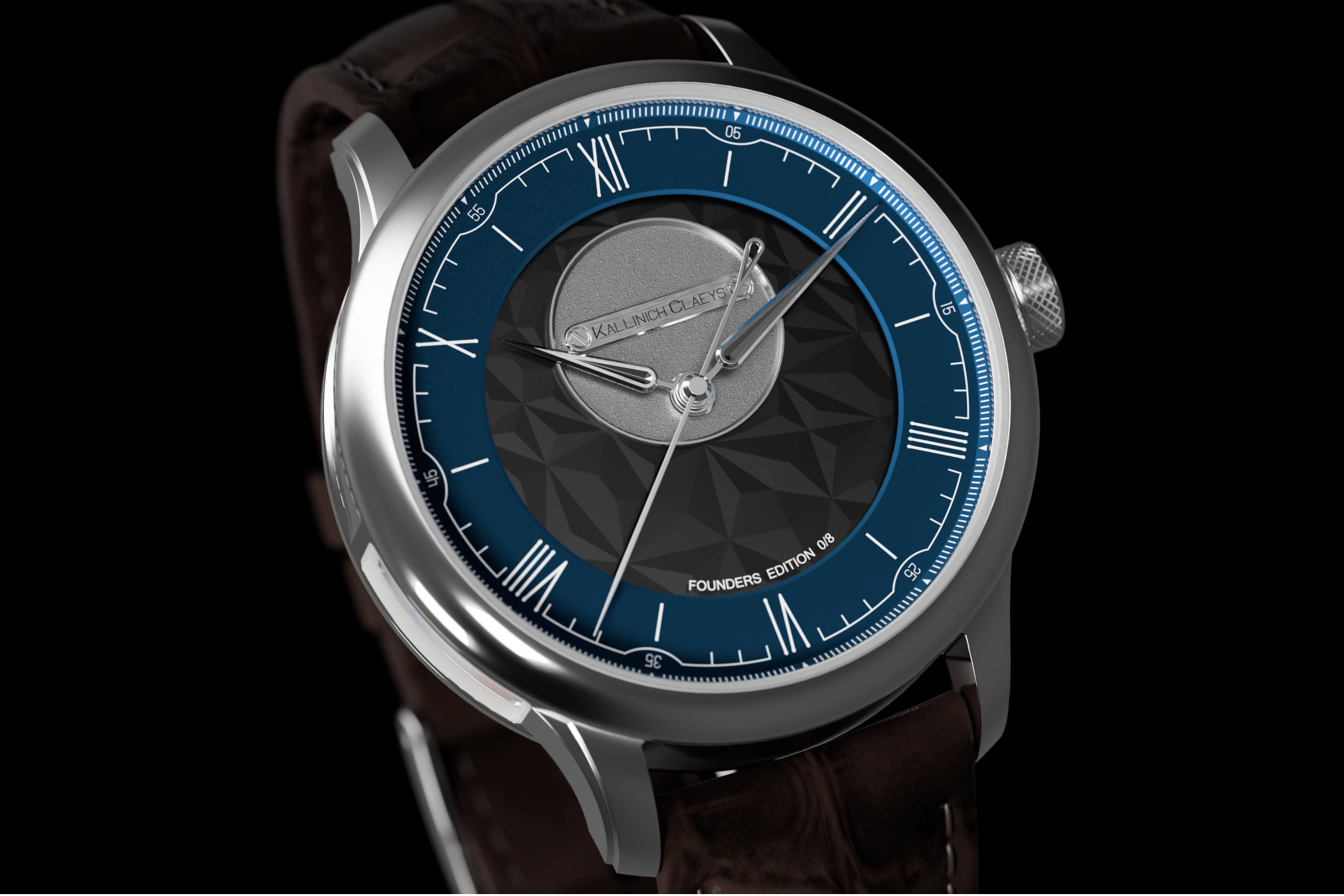 The feedback Johannes received on his Meisterwerk watch served as the energy to start a completely new design that now culminates in the Kallinich Claeys Einser Zentralsekunde. It was really a matter of perfect timing as Johannes and Thibault found common ground, with one having designed a complete watch and movement and the other having a fully equipped workshop at home. So, both men quit their jobs working for A. Lange & Söhne and are now hard at work to create the first prototype of the Einser Zentralsekunde. Judging by what we’ve learned, it is shaping it be a true stunner of a watch, made mostly by hand using traditional tools and techniques. And even though we only have 3D renderings to go by, for now, we have no doubt about the craftsmanship of both young men after talking to them!

In terms of design, the Kallinich Claeys Einser Zentralsekunde is best described as typical German, with appealing contemporary touches which we’ll get to in a bit. The Einser Zentralsekunde comes in a stainless steel case that measures 41mm in diameter, 11mm in height and 45.2mm from lug to lug. The construction of the case is outsourced, but as this story progresses, you’ll see it is one of the very few elements not down in-house by Johannes and Thibault. The design of the case includes details like stepped lugs, alternating finishes, and a contemporary styled crown. A sapphire crystal covers both the dial and movement, with a third surprise sapphire crystal nestled into the caseband. This reveals the power reserve indication, giving you on-the-go information about the amount of energy left in the mainspring, but more on that later. 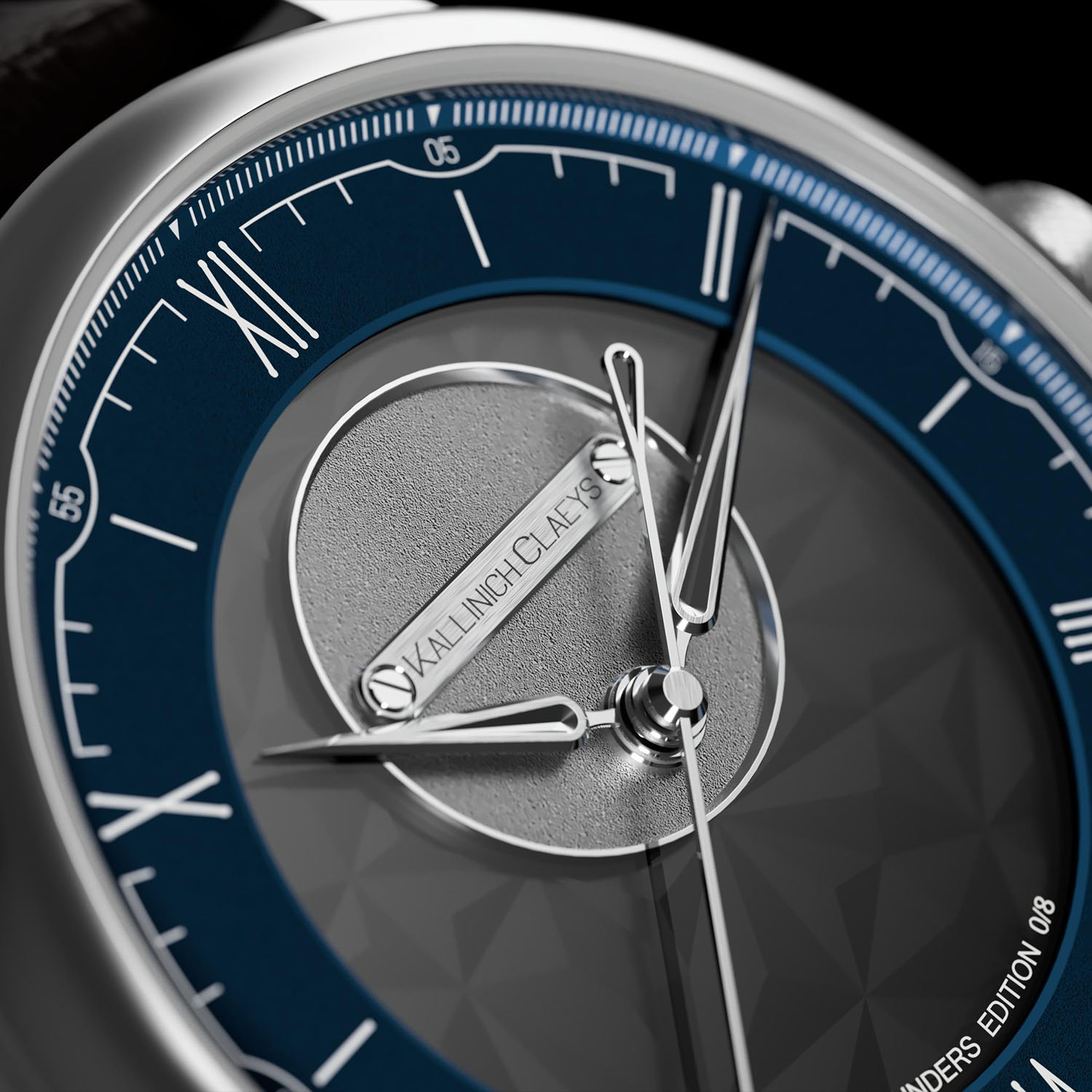 If we move to the dial, there are a lot more details to be discovered. Looking at the images you’ll see there are two different dial options. On one end we have the regular Einser Zentralsekunde, and on the other, we have the Founders Edition. Both will have the same overall dial design, with the difference being the centre section. The Founders Edition will have a hand-engraved abstract pattern while the normal one will have a guilloché decorated dial centre made by Guilloché master Jochen Benzinger. 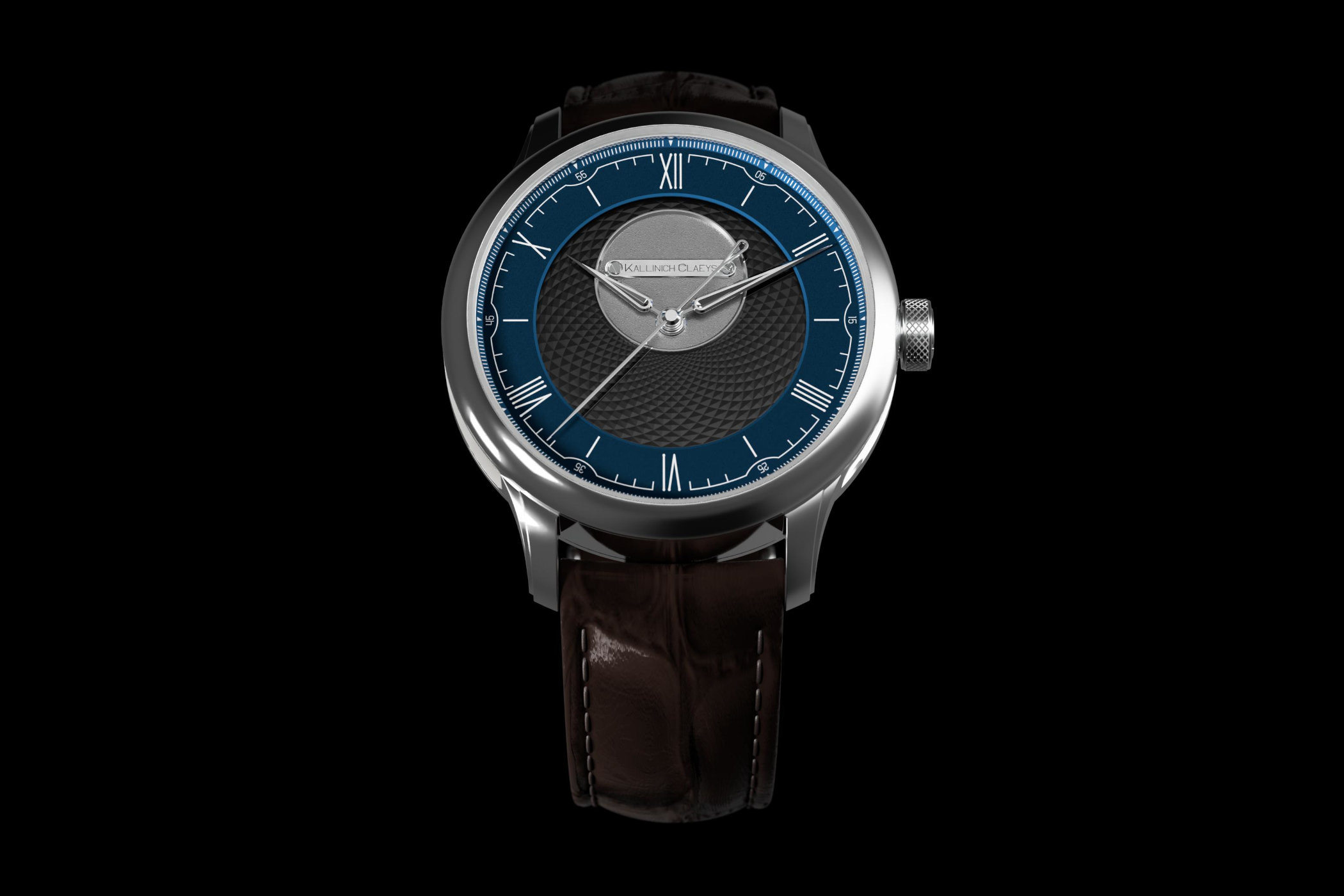 Both dials will be covered by transparent Grand Feu enamel, done in-house by Johannes and Thibault. This is surrounded by a deep blue chapter ring with Roman numerals combined with straight markers for the hours and a sleek and more modern minute and seconds track on the outside. It will be finished with a texture comparable to sandblasting, albeit a touch more coarse. The plaque in the upper half of the dial is finished with tremblage, by hand of course, and bears an applique with the brand’s name. The hands are made and finished in-house, with two types of graining on the top and chamfered recessed sections in the middle. To me, it shows exactly what the Einser Zentralsekunde is all about. Traditional watchmaking with modern elements.

It’s important to emphasize the amount of work that is done in-house. The entire movement has been designed from the ground up, with all calculations done by Johannes Kallinich. And even though some components like the mainspring, escapement and jewels are outsourced, everything else is constructed and finished by hand by the two men. This means the German Silver plates and bridges, screws, wheels, and gold chatons. The manually wound KC001.1 movement uses 33 clear sapphire jewels to provide a more modern look and runs at a leisurely pace of 18,000vph (a deliberate choice, feeling it fits more with traditional watchmaking). The finishing is all done in-house too, with black polishing, anglage, frosting, engraving, multiple types of graining et cetera. We’re talking proper Haute Horlogerie levels here! Running on a single barrel, the movement will provide you with 45 hours of power reserve, which is indicated with a blue “finger” running along the scale visible through the side of the case.

The Kallinich Claeys Einser Zentralsekunde will be presented on a dark brown alligator leather strap and have an expected final price of EUR 24,950. Johannes Kallinich and Thibault Claeys have labelled the first 8 pieces ever made as the Founders Edition pieces, which come with that unique abstract engraved dial and are labelled as one of the eight. These will require a 100% deposit, which sounds daunting but it will buy you a unique chance to start a very promising watchmaking atelier that’s hopefully around for years to come. The regular Einser Zentralsekunde, if you can call it regular at all, will be produced in a run of 22 pieces once the Founders Edition pieces are completed. Deliveries are expected to be around one year from now.