It is hard to believe but MB&F is already presenting its tenth Horological Machine today… without counting the multiple of editions introduced for each model. 15 years ago a man named Max Büsser, surrounded by his friends, launched a brand that will become one of the most respected of the indie scene. For 15 years, he will play with some of the boldest designs and most innovative displays. Certainly, like it or hate, but MB&F’s watches can’t leave you cold. And the tenth Horological Machine, the MB&F HM10 Bulldog, is certainly not going to change that. Even though inspirations are slightly different today. 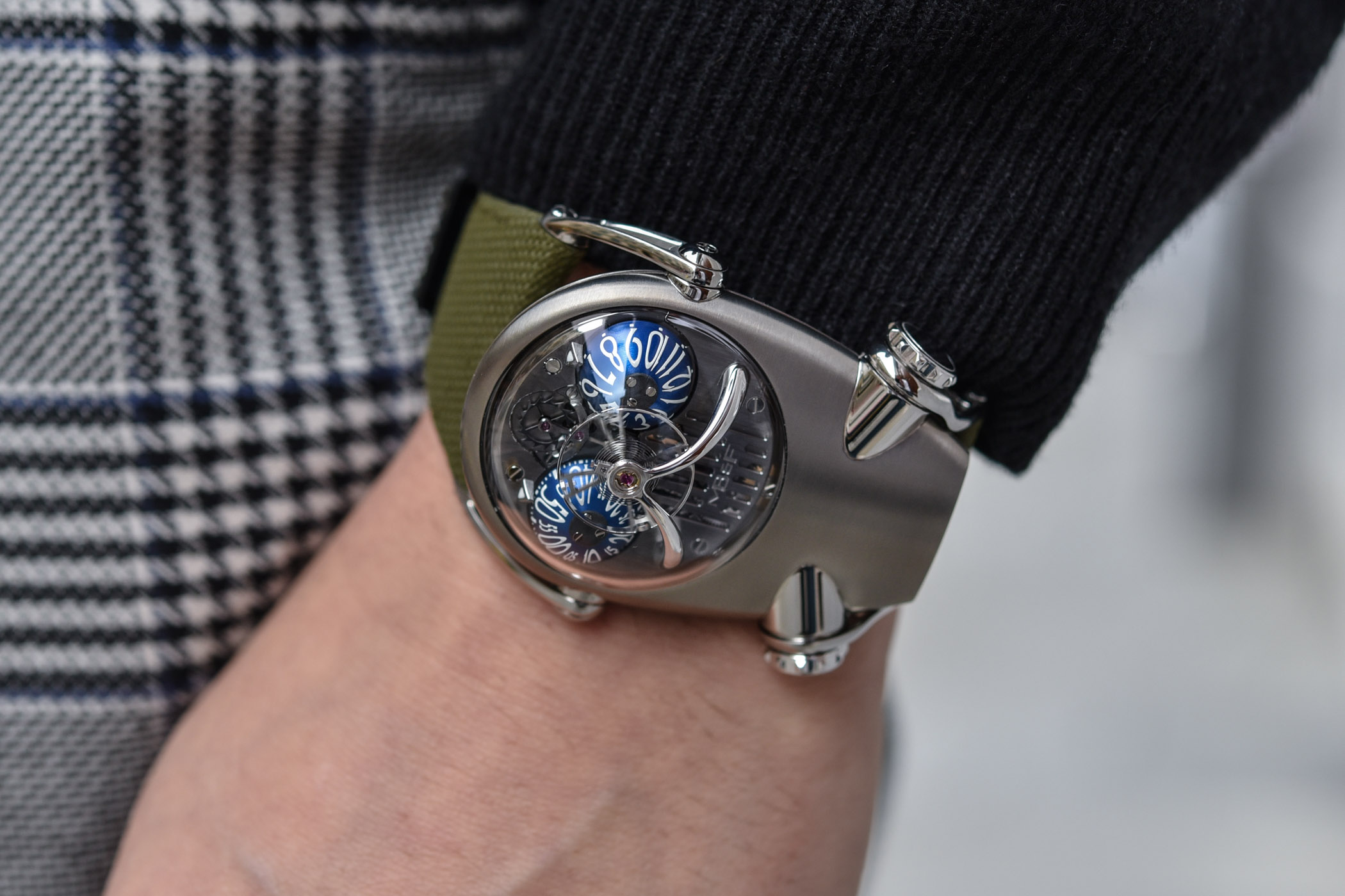 MB&F’s first creation, in 2005, was named the Horological Machine N°1 or HM1 and, as you can see in our retrospective here, it came with one impressive, space-like design that will be the base for the collection. Unusual design, visible regulators, contrast between round and angular shapes, clear science-fiction inspiration… All of this came from the “childish” mind of Max – at least from its childhood dreams. 15 years later the brand has drastically evolved, yet without losing its roots. In the meantime, MB&F launched a more traditional collection, the Legacy Machines, where steampunk inspirations rule, as well as complex mechanisms. Those 15 years have also allowed the brand creating some iconic features: the bubble-like sapphires, the articulated lugs, the combination of materials, the domed “eye-like” time displays, the suspended and oversized balance wheels, the asymmetrical cases… All of them found in one or the other collection. 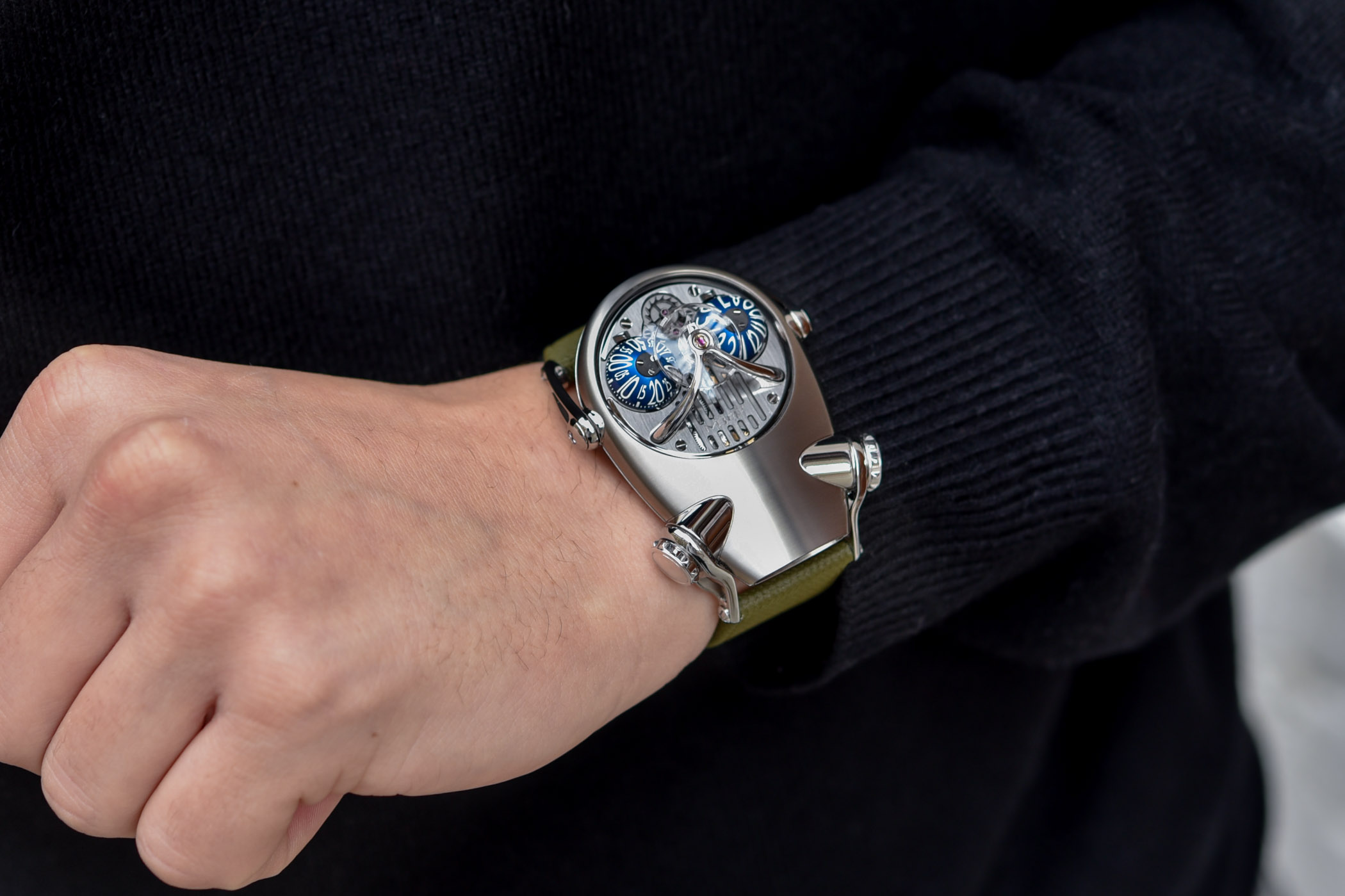 The new MB&F HM10 Bulldog, after exposing these elements, feels a bit apart, not only because the foundations for the inspiration aren’t a spaceship or a 1970s cartoon anymore, but also because this watch could be seen as the missing link between the HM and LM collection. “The design came to Max Büsser while he was travelling in Japan; Horological Machine N°10 Bulldog bounded up in his mind’s eye just as a loyal pup might greet a returning master.” “What you see now in front of you is more or less exactly what I saw at the time,” says Max. Certainly, on paper, this is quite a departure from the brand’s usual codes. In the metal, the result feels deeply MB&F, yet with a few novelties. Just like previous machines, mostly the HM3 Frog and HM7 Aquapod, the HM10 is more organic, less technical than other HM watches. And with its large eyes, expressively mobile mouth and exposed heart, it will once again create contrasted reactions – something that MB&F has always wanted.

The MB&F HM10 Bulldog in details

The Bulldog – the dog, that is – is a medium-sized, muscular, hefty dog with an evocative wrinkled face and a relatively short profile. The watch is shaped in the same way. The case, a compact body of titanium or red gold, is relatively wearable – at least, regarding MB&F’s usual standards – measuring 45mm across, 54mm from nose to tail and with a maximum height of 24mm. It is combined with sprung strap attachment lugs under the case, allowing for a smaller feel when worn and a nice balance on the wrist. 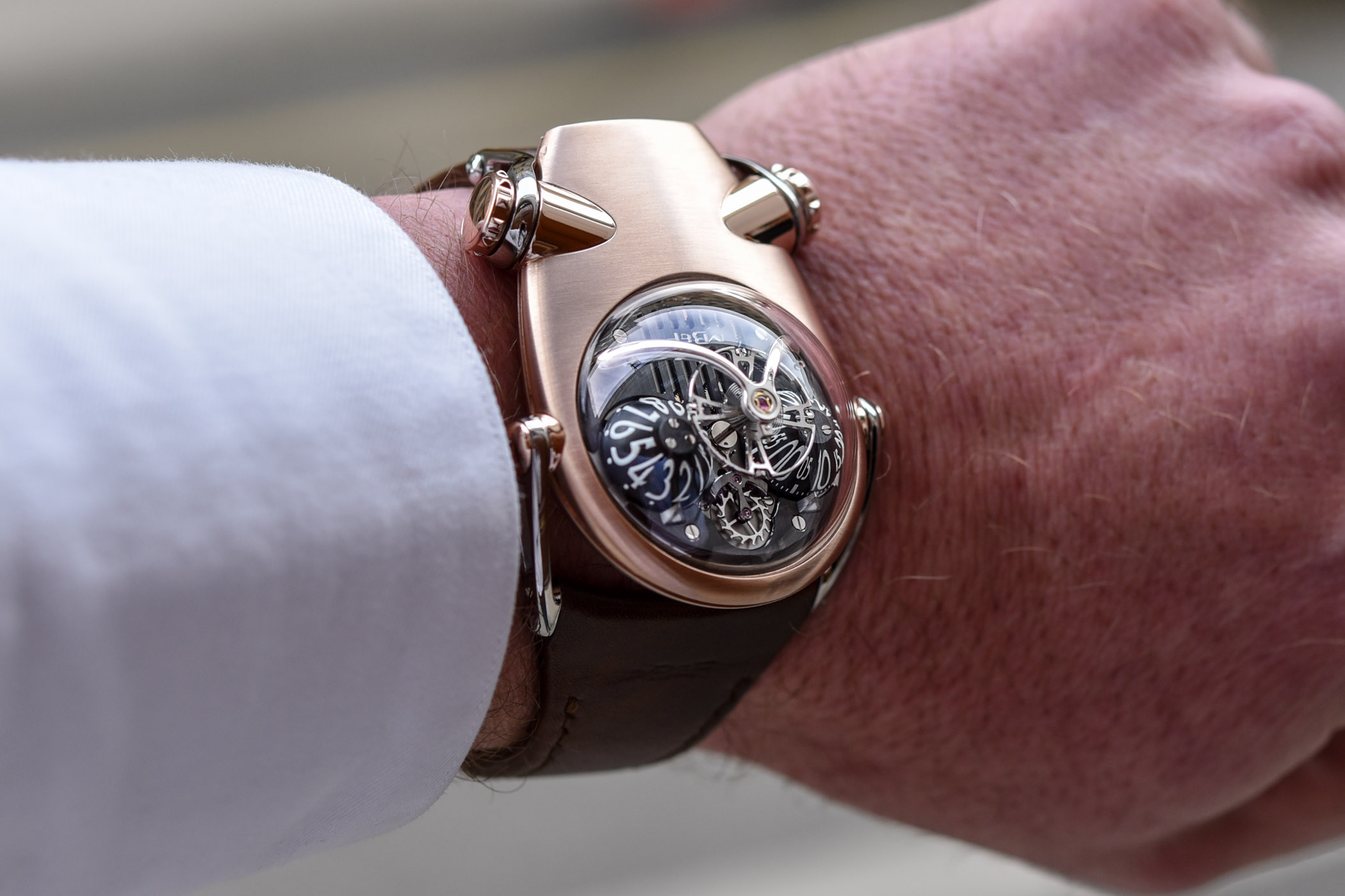 The case is entirely asymmetrical and designed to be seen by its wearer only. This means that the display is positioned right in front, protected by 2 highly domed sapphire crystal. Underneath are signature domed time displays, one for the hours, one for the minutes, which are a clear tribute to the HM3 Frog. These paper-thin aluminium eyes are topped by yet another classic elements of MB&F watches, the floating oversized balance wheel held in place by an arched bridge, rounded and polished. Its presence is more surprising in this HM context, as it is usually the apanage of the LM collection. But knowing the more organic feel of this HM10 Bulldog, its makes sense here – and we won’t complain as its looks fabulous anyway. 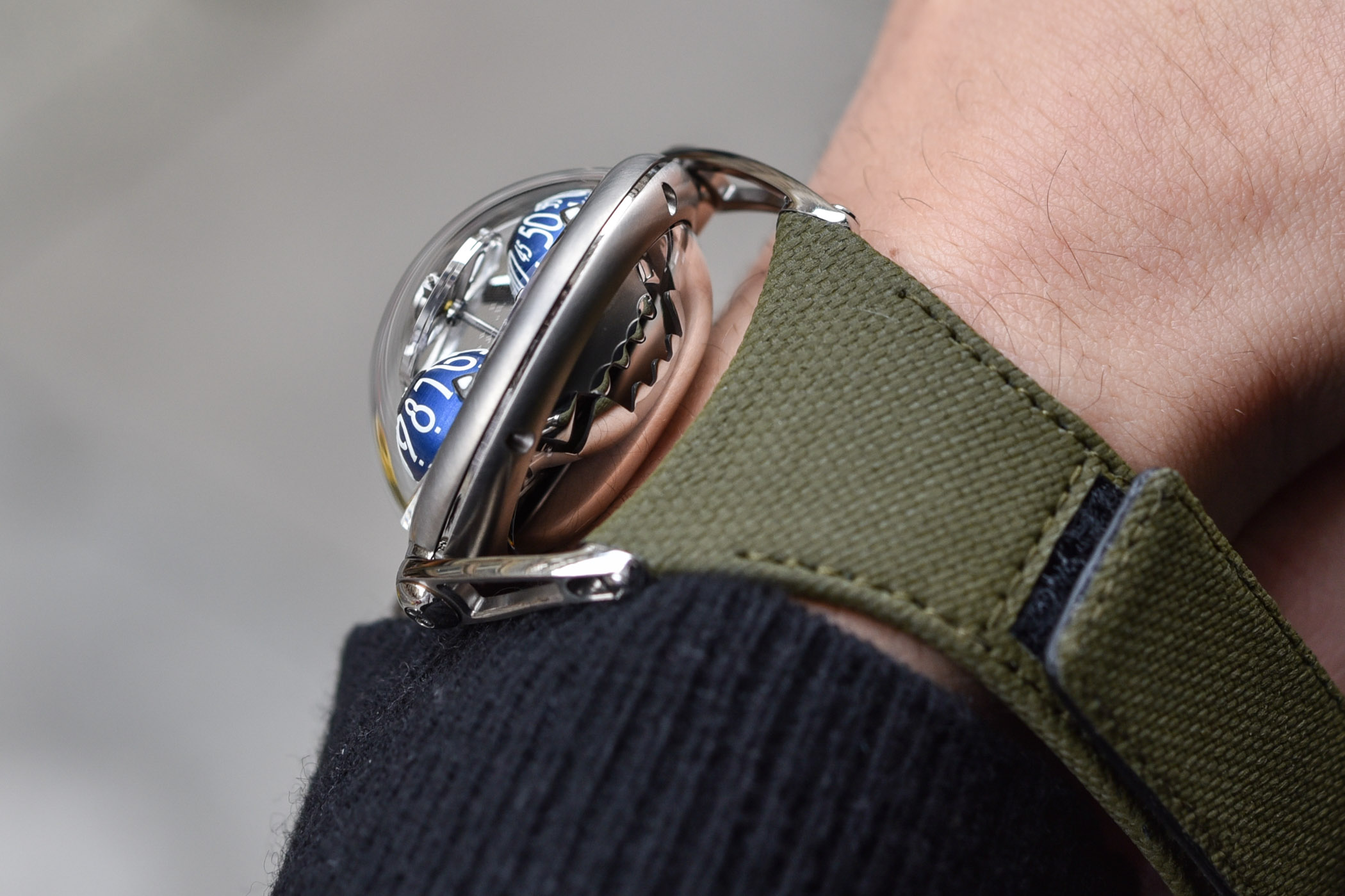 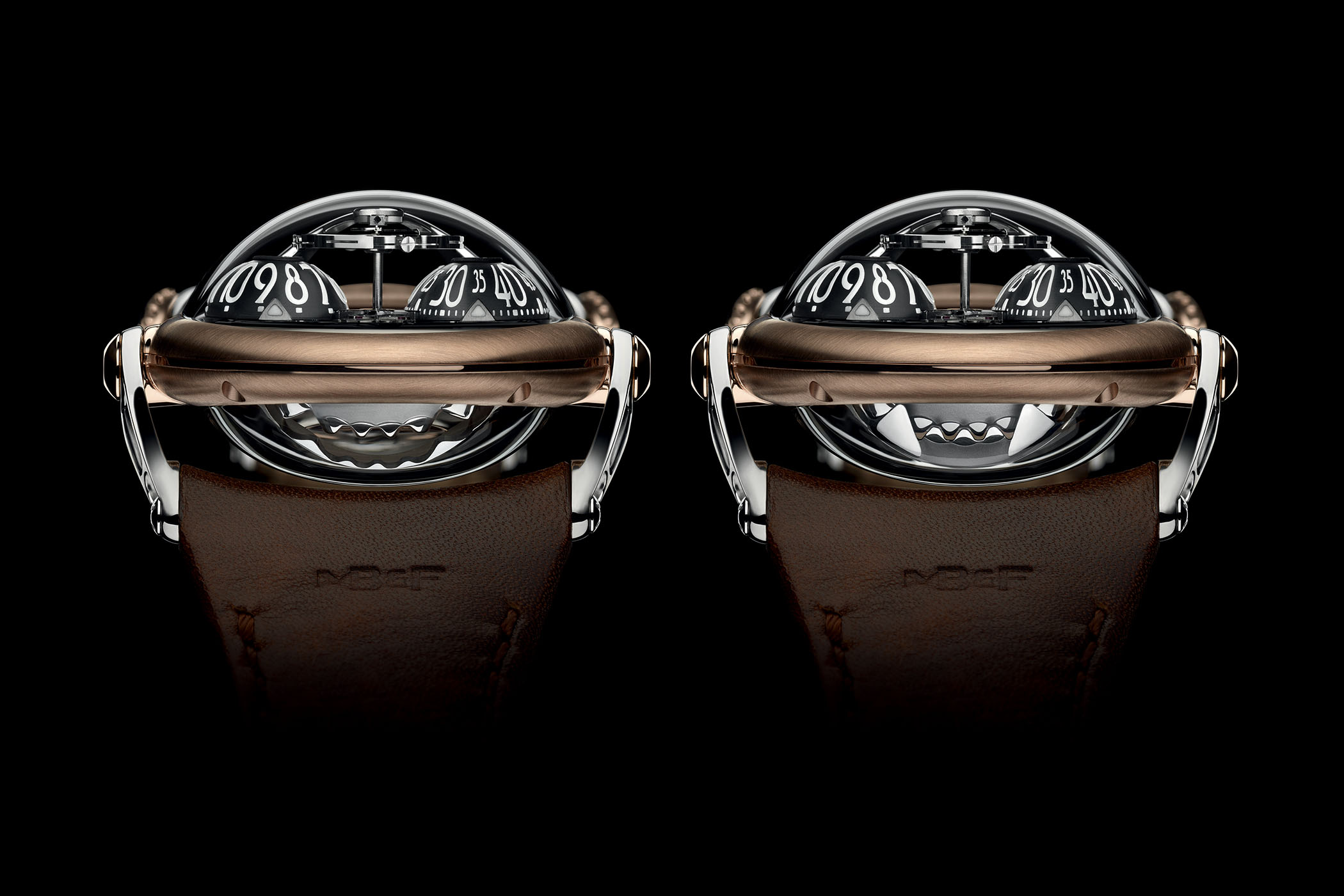 The most surprising element of the HM10 certainly is its hinged jaws… Yes, jaws that open or shut. This feature isn’t visible at first and mostly reveal to the wearer. According to the level of remaining power reserve, these jaws will open or close. A fully closed mouth tells you that HM10 needs to be wound. When you see the rows of shining teeth lining the jaws, it is ready for action and wound. Talking power reserve, HM10 boasts 45 hours, still rather long considering the eye-like display, the massive balance and this massive power reserve indicator (which has been designed and calibrated to consume the least energy possible). As often with MB&F, the watch features two crowns, one to wind the movement, one to adjust the time. 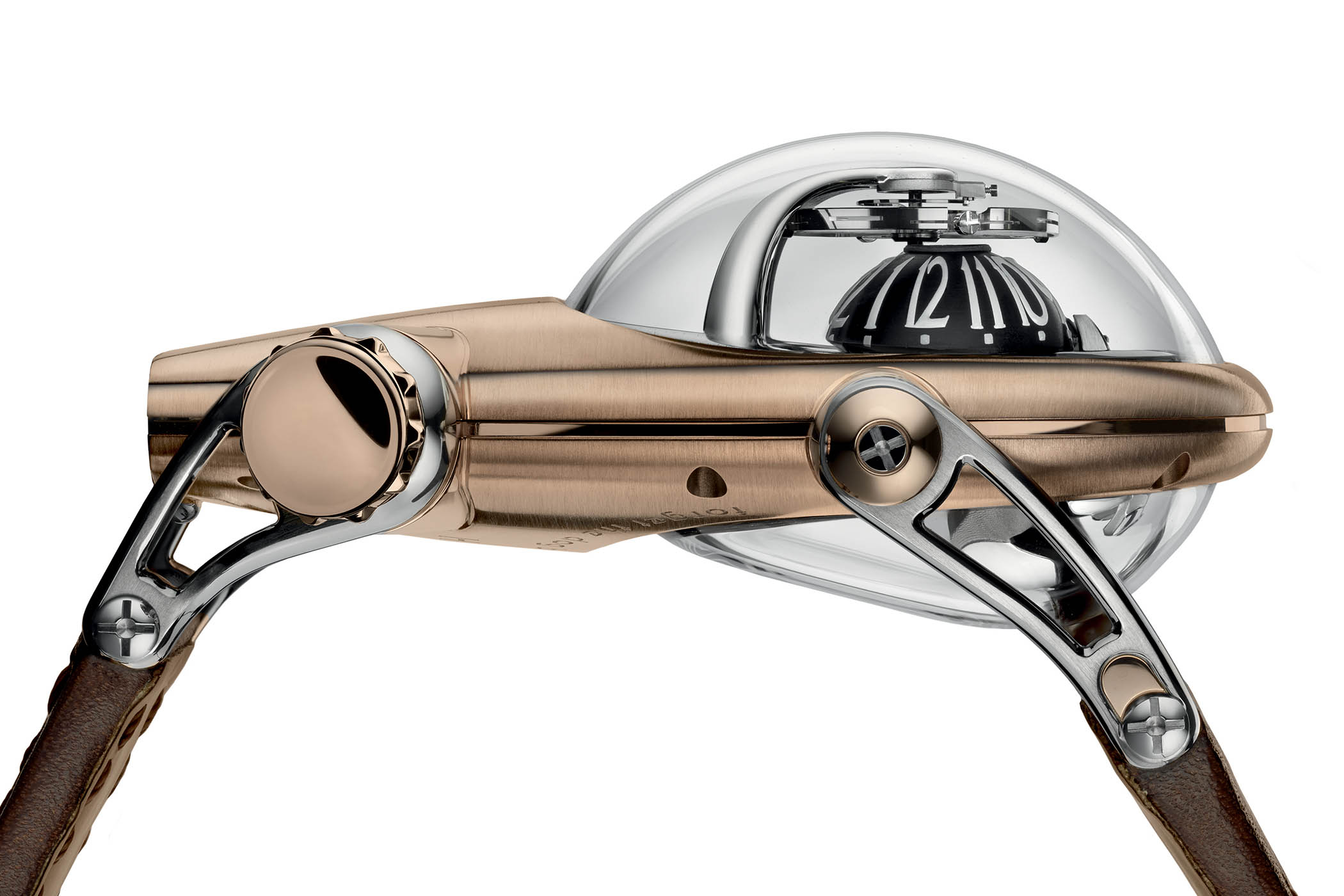 The MB&F HM10 Bulldog is presented in two, non-limited editions. The first is entirely made of grade 5 titanium and features grey decorative elements as well as blue domes for the time. This titanium model is worn on a textured leather strap (in blue but also khaki is available, as you can see in our live images) combined with a velcro attachment system. The second version is a combination of red gold for the external structure and titanium for the chassis. Here, the movement is darker and the “eyes” are black. Being slightly more luxurious, this version is worn on a brown calf leather strap with a gold and titanium folding buckle.

Creating such unique watches requires purpose-built mechanics, and this HM10 Bulldog is no exception to the rule of movements developed in-house by MB&F. This movement, just like the design of the watch, is combining 15 years of experience and well-known technical solutions for the brand. 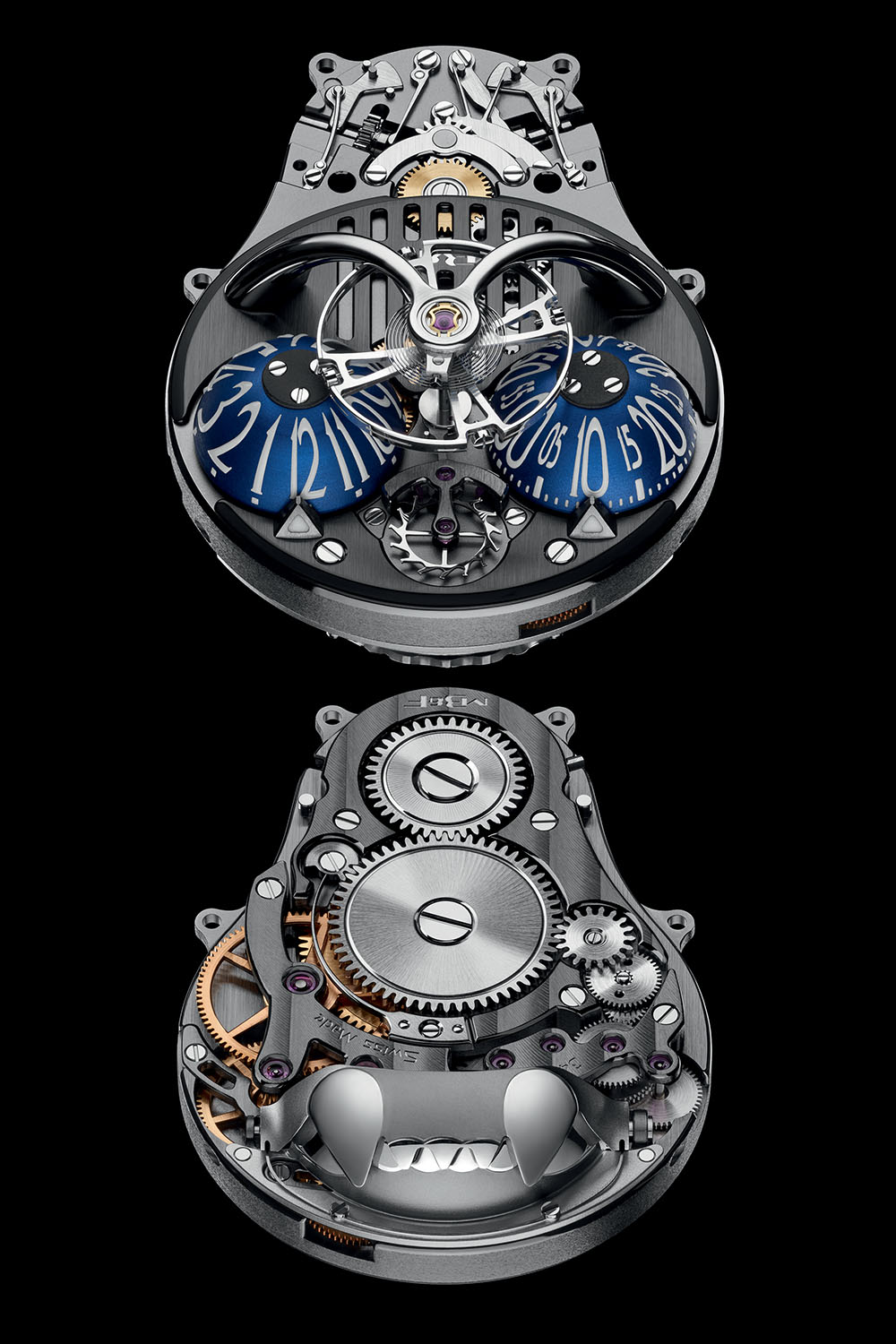 The main technical feature of the watch is the eye-catching suspended balance, which first appeared on the Legacy Machine No1 and found its way in most the LM watches, as well as the HM9 – yet in a less obvious way. Underneath the central sapphire crystal dome is the oversized (14mm) flying balance wheel beating at the traditional cadence of 2.5Hz, the escapement being relegated on the movement’s mainplate, yet fully exposed between the time displays.

Turning the watch over, the hand-wound movement is decorated with classic MB&F codes, meaning dark-coated bridges and plates, bevelled angles, oversized ratchet and barrel drum rhodium-plated and 5-spoke wheels gold-coloured. The entire movement is shaped accordingly to the design of the case. 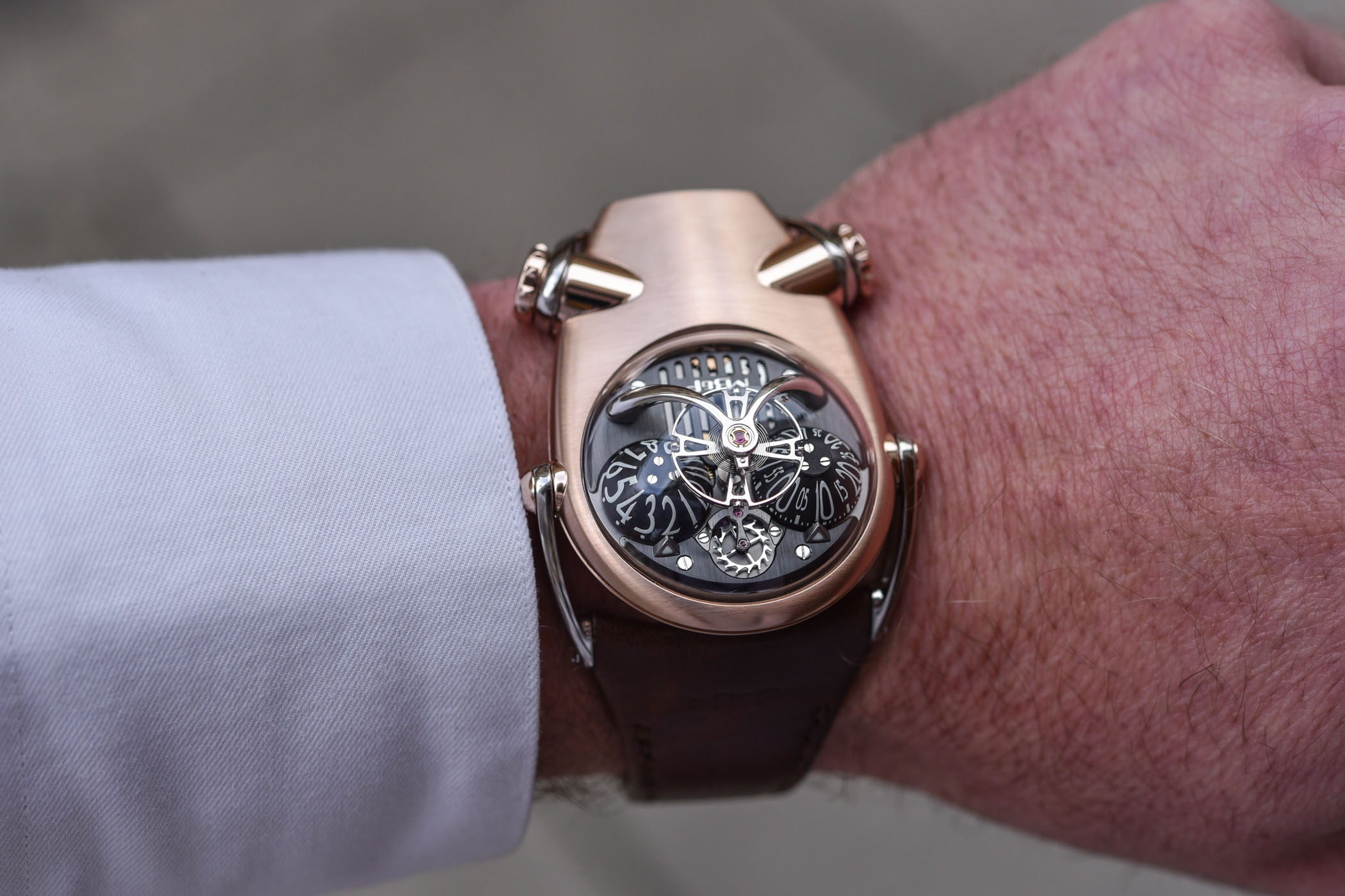 This new, bold and eye-catching MB&F HM10 Bulldog is another impressive piece… no doubt that the brand knows how to create emotionally-driven watches. It is presented in two launch editions, in grade 5 titanium with blue eyes or in red gold and titanium with black eyes. Both are not limited in production. They will be available at retailers in the coming days.