The Aikon is Maurice Lacroix’s interpretation of the luxury sports watch, a collection of watches with a solid build, a distinctive style and refreshingly competitive prices. Introduced in 2016 with quartz movements, in 2018, an automatic Aikon model appeared, followed by a bolder and sportier iteration known as the Aikon Venturer. With its 43mm case, water-resistance of 300 metres and rotating bezel, the diving credentials of the first batch of Aikon Venturers were paired with straightforward time-and-date functionality. Today the brand adds the Maurice Lacroix Aikon Venturer GMT to the collection, with a complication allowing you to consult the time in two different time zones at a glance. Two versions, with black or white dials, are the first representatives of the new Aikon Venturer GMT line matched with an integrated steel bracelet or a black rubber strap (or both). 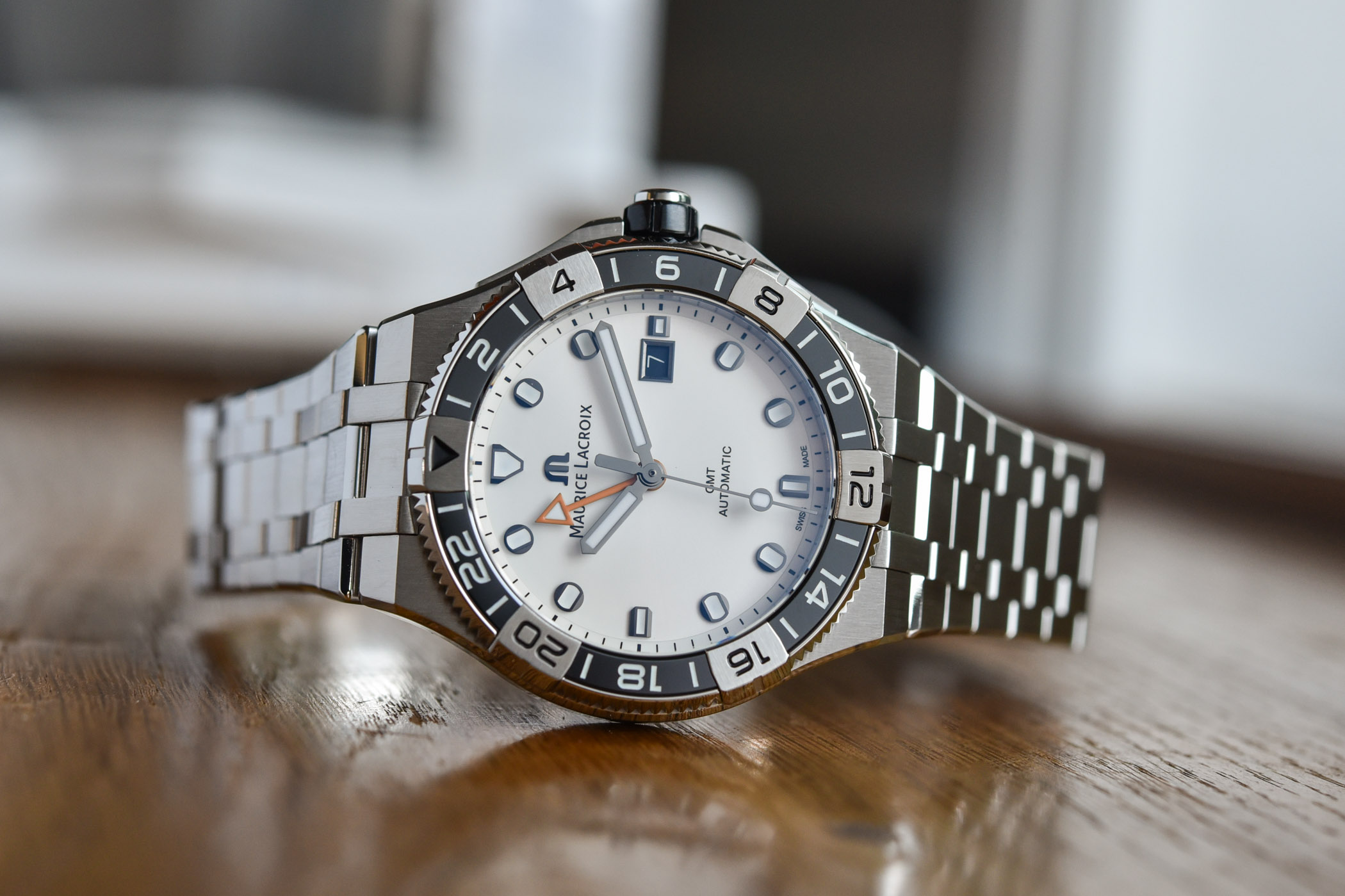 Adopting a similar strategy to Audemars Piguet, which launched the Royal Oak and then developed a sportier, more aggressive line known as the Royal Oak Offshore, the original and more restrained Aikon sits alongside the burlier Aikon Venturer. The Aikon family traits – barrel-shaped case, raised and notched bezel with six claws and integrated bracelet – are beefed up on the Aikon Venturer to generate a bolder, sportier look. 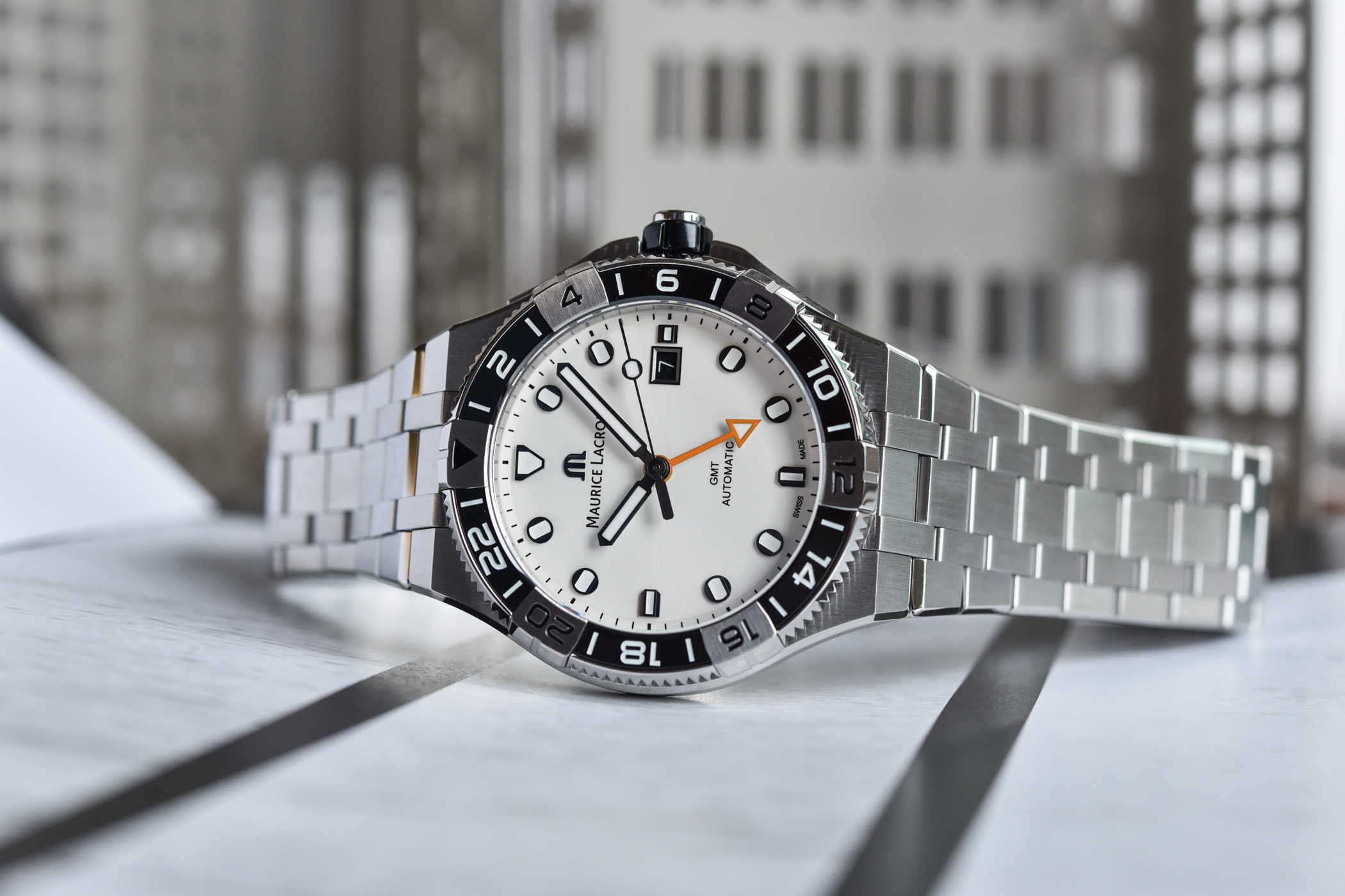 The tonneau-shaped case of Aikon Venturer weighs in at 43mm with a height of 12mm and features a solid crown guard module to ensure the 300m water-resistance. As Brice mentioned in his coverage of the time-and-date model, the case height is relatively thin, avoiding the hockey puck problem of a thick case.

The hallmark bezel with six claws of the Aikon – converted into a 60-minute diving scale on the former Aikon Venturer time-and-date model – now doubles up as a 24-hour scale for the GMT. Crafted from scratch-resistant black ceramic with vivid white Arabic numerals, the six raised claws on the bezel are made from brushed stainless steel with engraved Arabic numerals picked out in black (4, 8, 12, 16, 20) with an inverted triangle at 24h. The well-defined and serrated notches on the bezel underscore the muscular personality of the watch. 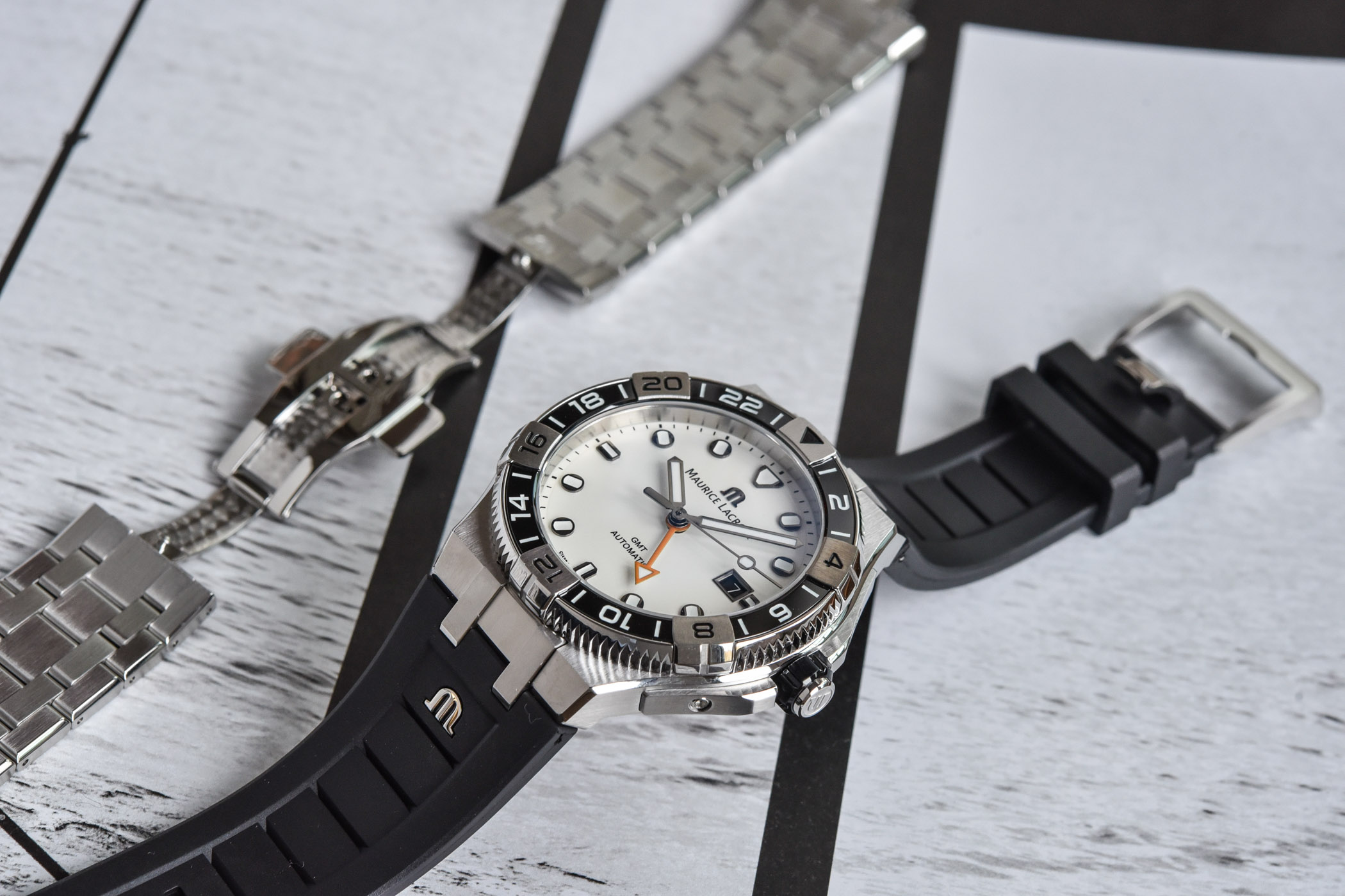 The case and bracelet are predominately brushed – in line with the watch’s sporty nature – contrasting with the polished edges. Like many luxury sports watches, the five-link stainless steel bracelet flows directly from the case for a compact, seamless look. The EasyChange system featured on all Maurice Lacroix Aikon watches means you can switch the steel bracelet for a rubber strap without fiddly tools in a matter of seconds. If you look at the photograph of the caseback, you can see how the EasyChange release and click system works with the four small protruding catches. The black rubber strap option highlights the two claws that extend from either end of the case, providing visual continuity with the characteristic claws on the bezel of the Aikon. The caseback is screwed-down and engraved with a world map with the 24 time zones.

The dials display an attractive sunray-brushed finish and are extremely legible thanks to the minimum amount of clutter, the large indices and the generous amount of lume. Picked out in orange (white dial) or red (black dial) with a luminous arrow-tipped hand, the GMT hand stands out remarkably well. The large round indices representing the hours and the inverted triangle at noon are another distinguishing feature of the Aikon Venturer line.

The applied indices (rhodium-plated for black dial and black-plated for white dial) are faceted and treated with a generous amount of white Super-Luminova. The thick baton hands for the hours and minutes are also treated with lume, as is the lollipop area of the central seconds hand. The date window at 3 o’clock is framed and features a black background on both the white and black dials. 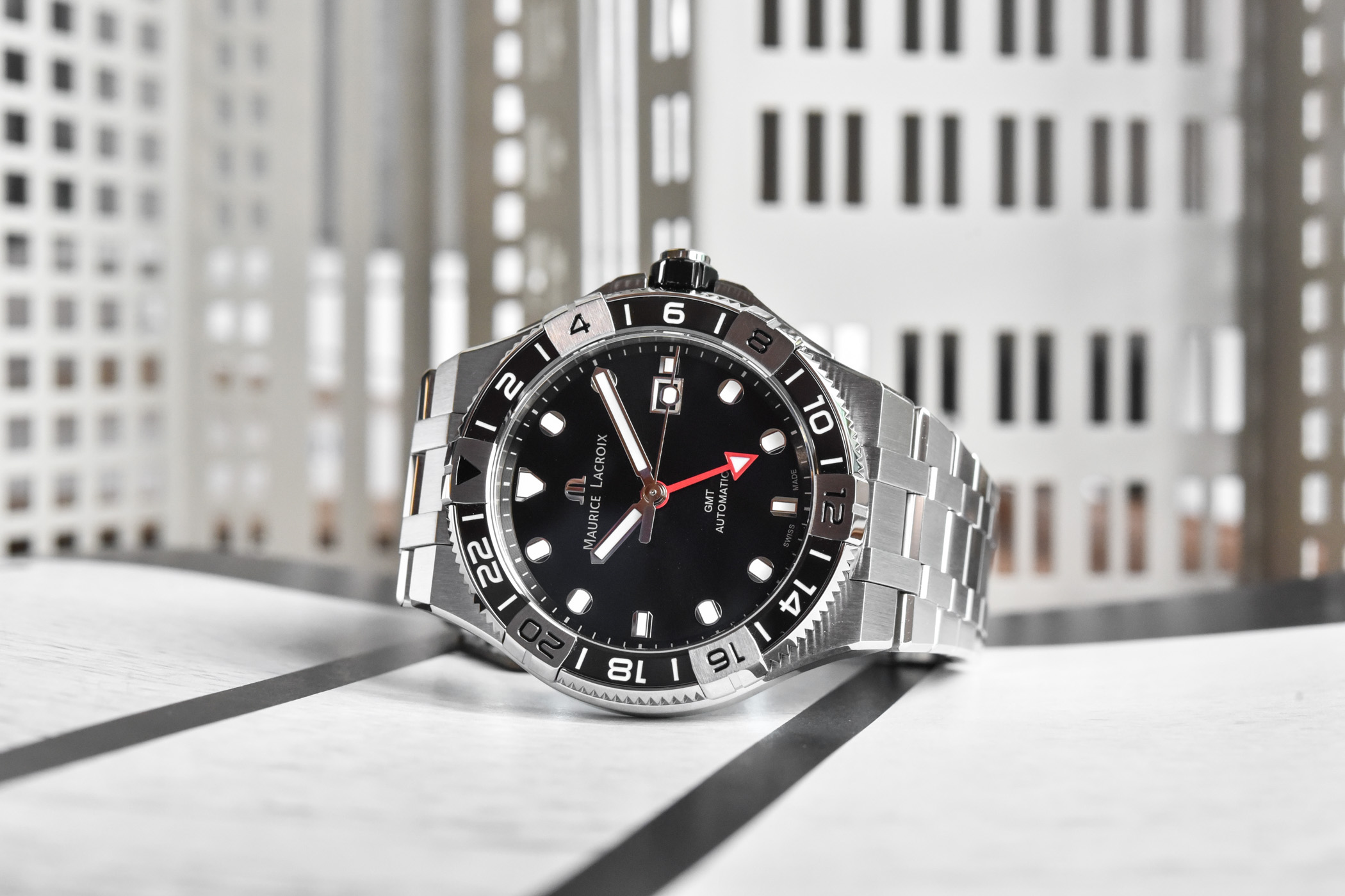 Although it is hidden under the caseback, the Aikon Venturer GMT relies on an automatic movement based on a Sellita SW330. Offering hours, minutes, seconds, date and a second time zone, the ML 165 beats at 28,800vph and has a 42-hour power reserve. 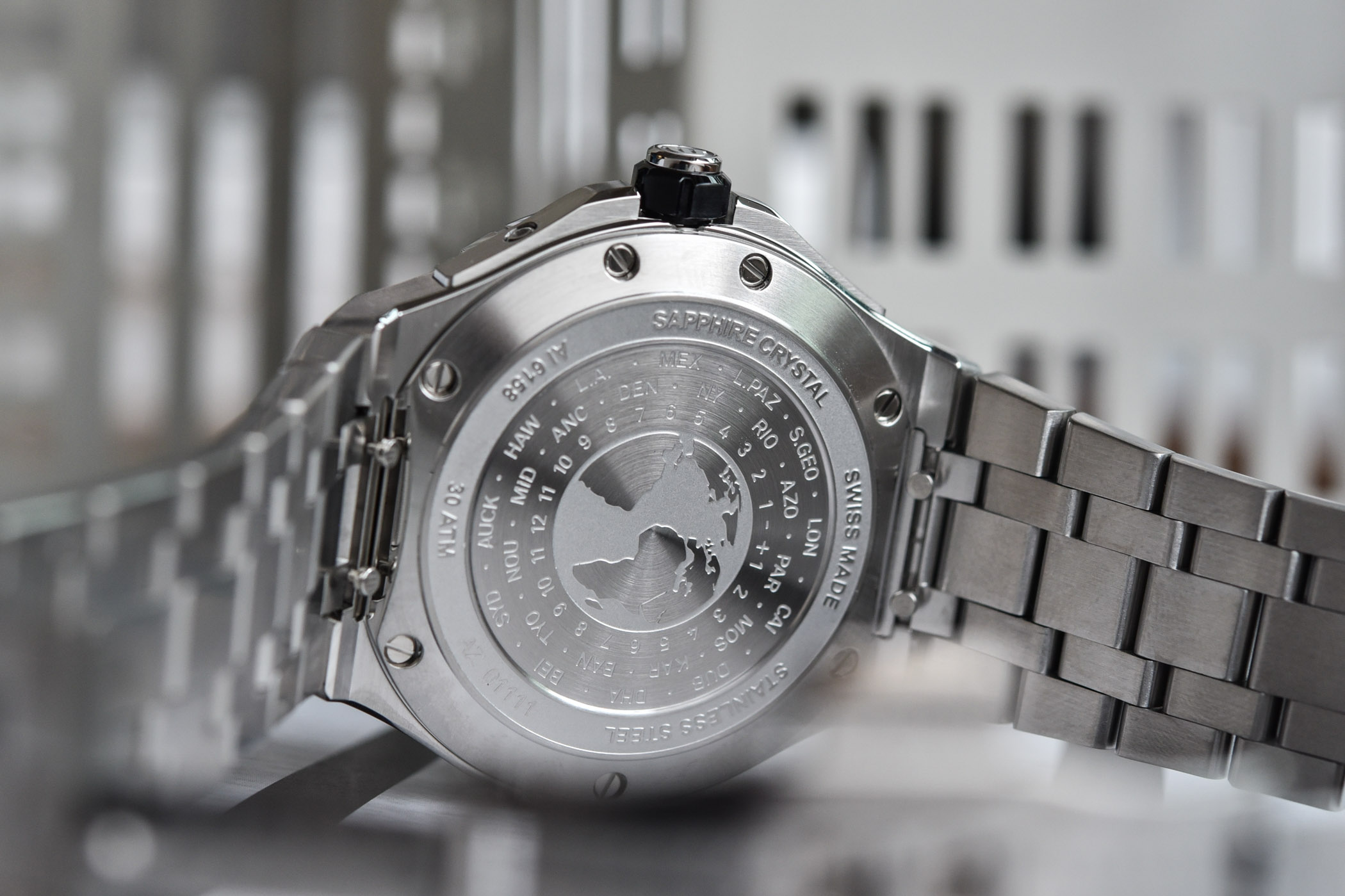 The Maurice Lacroix Aikon Venturer GMT with a steel bracelet retails for CHF 2,490. Fitted with a black rubber strap, the price is CHF 2,350. However, the most versatile option is the dual package containing the bracelet and strap with a retail price of CHF 2,650.