Leave it to the free-thinking, independent Russian watchmaker Konstantin Chaykin to create a watch dedicated to the Minotaur, the half-man and half-bull creature from ancient Greek mythology. While it might be the most well-known reference of the mythological beast, the bull is actually used in folklore and mythology the world over. Often a symbol of power, strength and fertility, the bull was frequently used in sacred rituals and sacrifices. It is also the Chinese zodiac sign for 2021, the year of the bull. Coinciding with the current Chinese 12-year cycle, Konstantin Chaykin introduces a special 8-piece limited edition; the Minotaur Special Chinese New Year 2021. 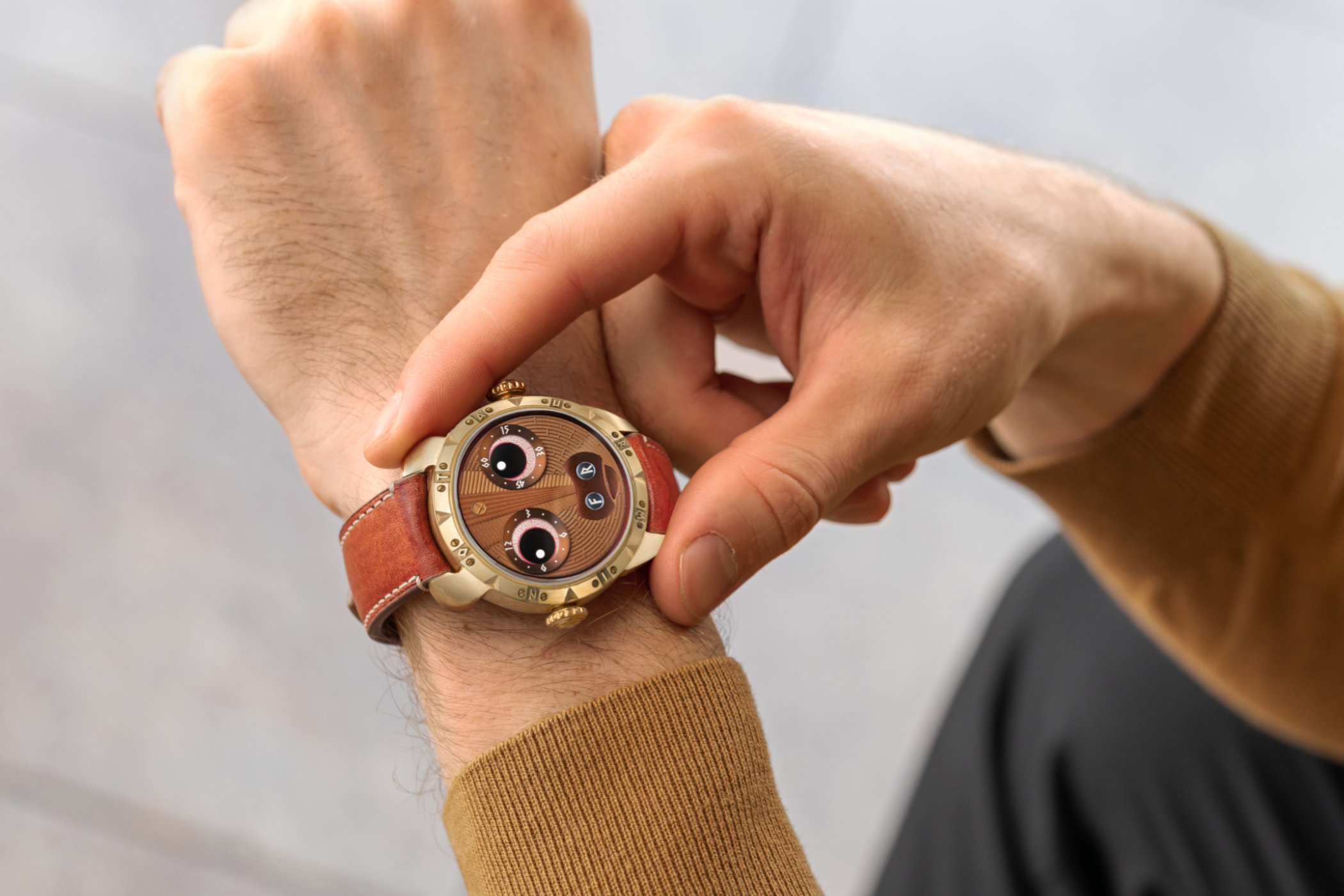 As mentioned, the bull is not only used in Greek mythology, but the saga might be the best known of all. Nevertheless, there are countless references to a bull having symbolic significance in cultures or religious beliefs around the world. The Minotaur, though, was the result of a feud between King Minos of Crete and Poseidon, god of the oceans. King Minos was granted a magical bull by Poseidon, to be sacrificed in his name. Trying to deceive Poseidon, King Minos swapped the bull for a regular one and hid the magical bull in a herd. Poseidon found out of course, and through the help of Aphrodite he made King Minos’ wife fall in love with the bull and become pregnant by it.

Honestly, we’re not making this up, it’s in the history books. Regardless, the bastard-offspring that came of that “romance” was the Minotaur, half man and half bull. King Minos trapped the Minotaur in the Labyrinth, a maze-like structure before it was eventually killed by Theseus.

The Konstantin Chaykin is of less, shall we say beastly, nature but does take inspiration from the mythical creature. Set in an iron bronze case measuring 42mm across and 13mm in height, it has a few very intriguing design elements. From the outside in, it starts with the double crowns. Both are functioning crowns, one to set the hour and minutes and the other to correct the secondary indications, which we’ll get to in a minute. Next, there’s the notched bronze bezel with the word “Minotaur” spelled out in relief lettering. 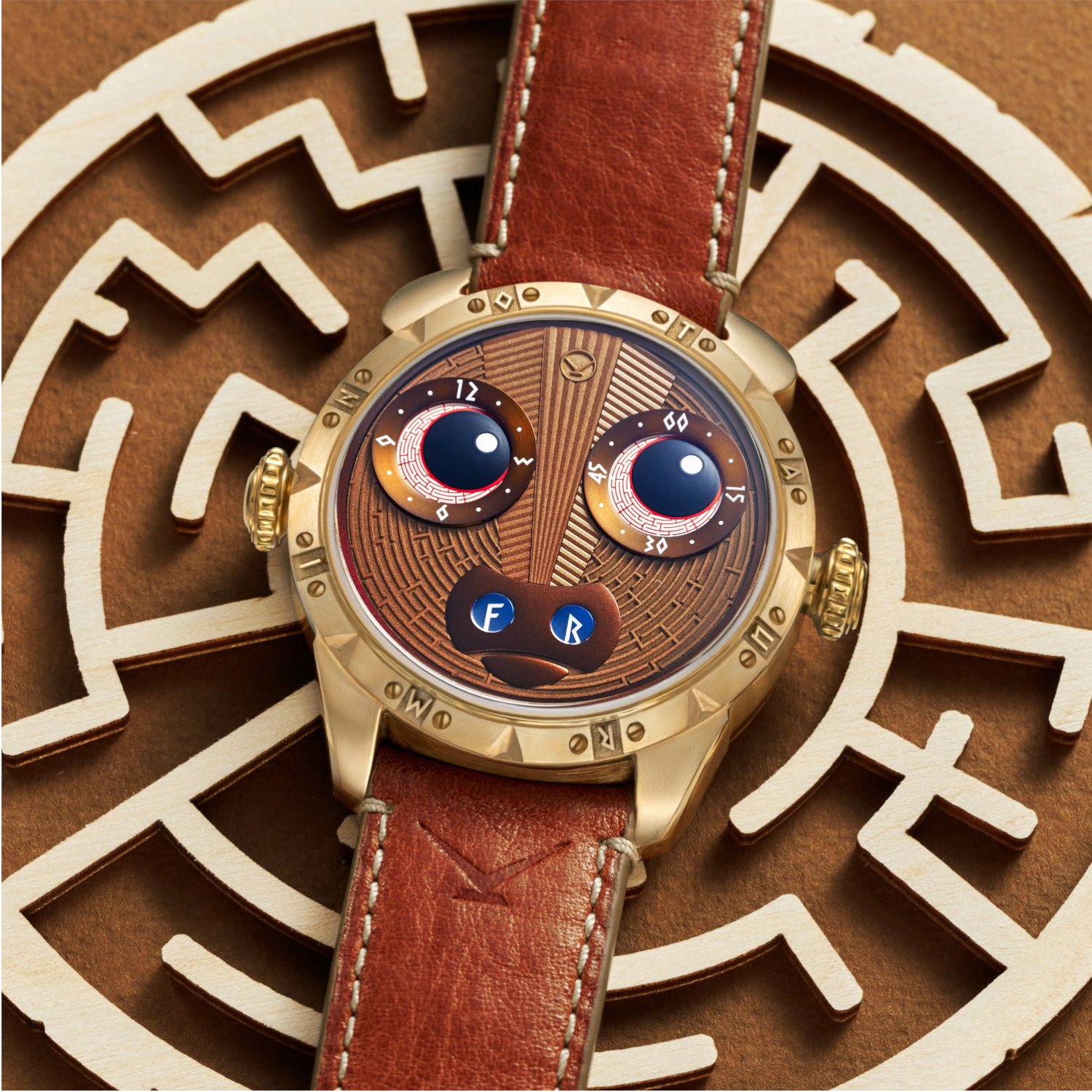 The thing that stands out most though, is the facially expressive dial, a trick Konstantin Chaykin has become very familiar with through his Wristmon watch series. This series of watches literally gives a face to time, where the hour and minutes subdials are made to look like eyes, and usually, a moonphase indication is shaped like a mouth. As the hour and minute discs rotate, the watch goes through a whole range of facial expressions during the day.

The entire dial is constructed using no less than 18 components. It is finished in a textured brown hue, with intricate decorations on most of the components. This includes guilloché work, and a labyrinth style pattern on the main dial components. On the left hand side there is the hour dial, with a similarly styled minute dial on the right, both using a disc styled to look like an eye. The disc has a small white dot set in a black circle, the pupil if you will, that points to the corresponding hour or minute. The black circle is outlined by a labyrinth pattern in red over white, to make it look like the eye is blood-shot. 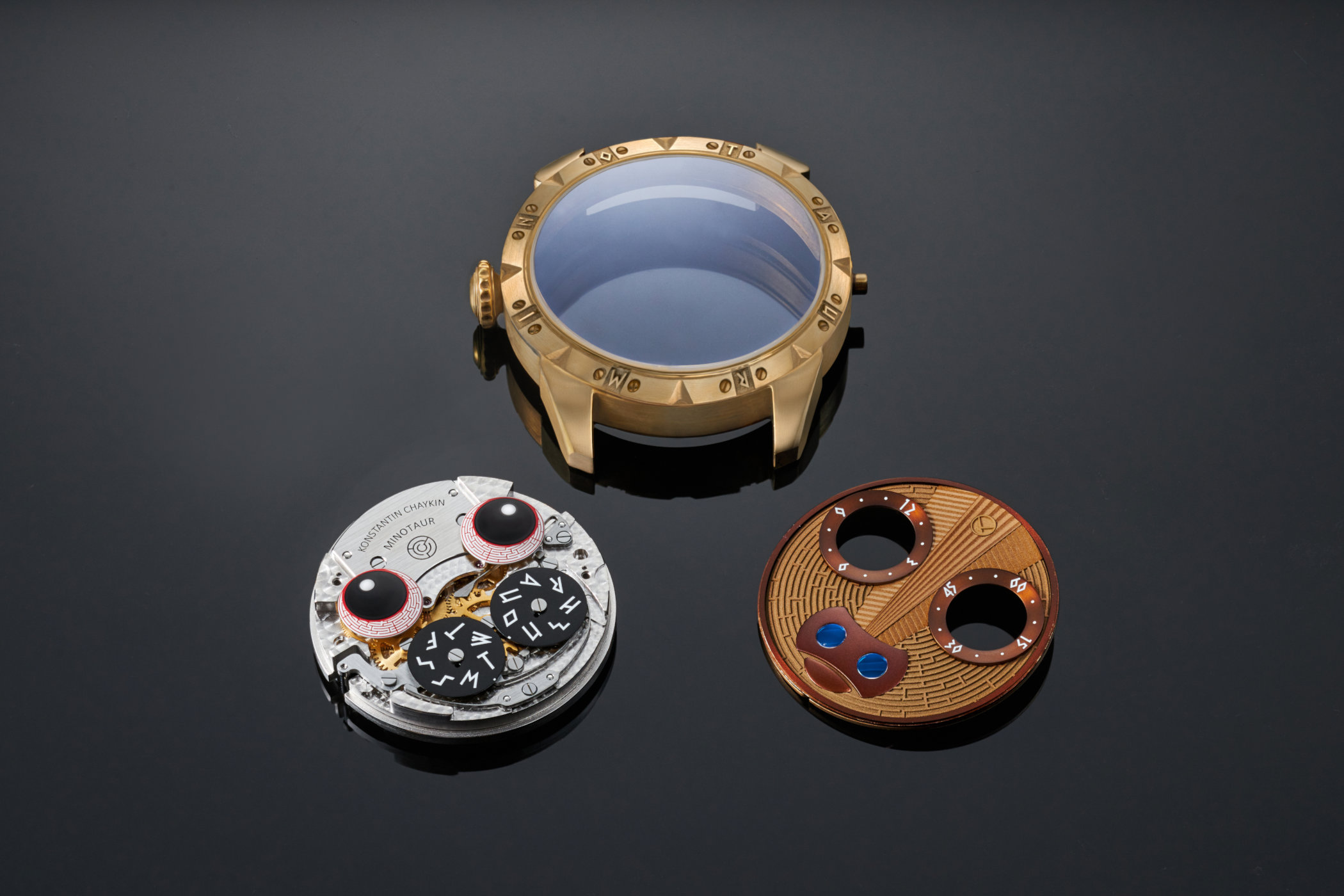 The rest of the dial aims to mimic the head of the bull even further. On the bottom section there are two apertures, shaped like nostrils, set into a nose-like segment of the dial. These nostrils show you the day of the week, indicated by two discs underneath the dial. This is a change from previous Wristmon models, such as the Mouse King dedicated to the Chinese year of the rat, where you would normally find a mouth-shaped moonphase indication. The day of the week discs are a combination of bronze and silver. All components are finished using traditional watchmaking techniques. 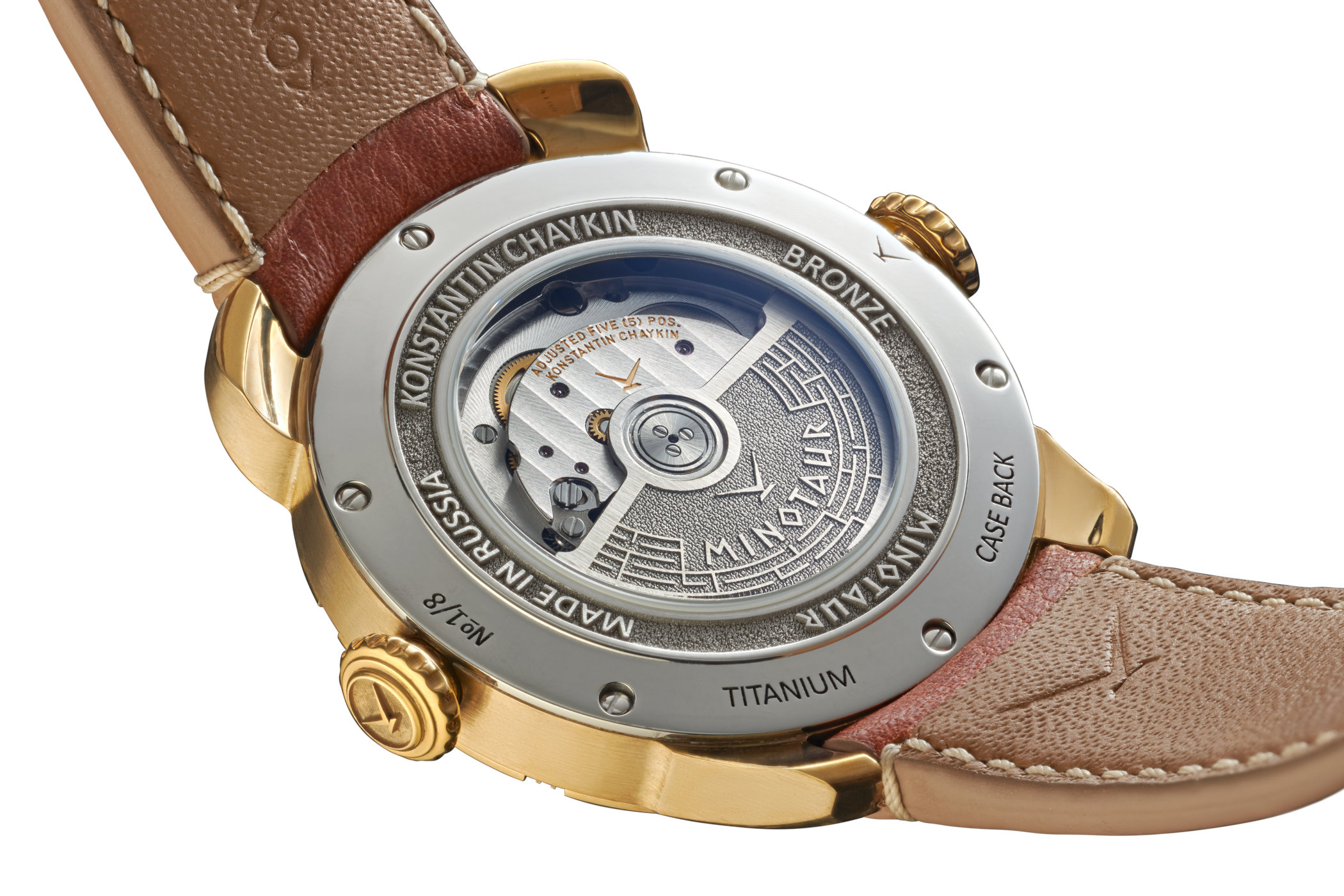 Underneath all of this, there’s the Calibre K08-1 which is a Vaucher VMF 3002 automatic movement with an in-house developed module on top. The module uses 67 components in total and is designed and constructed in Chaykin’s atelier. The movement runs at a frequency of 28,800vph (or 4Hz) and has 50 hours of power reserve. The Vaucher base movement is upgraded with a new rotor, again featuring a Labyrinth decoration, the Minotaur name and the Konstantin Chaykin logo. The movement is covered by a titanium caseback, to prevent any staining on the wrist  when the bronze gathers patina over time. Similar to the Mouse King, the water resistance is rated at 30 meters. 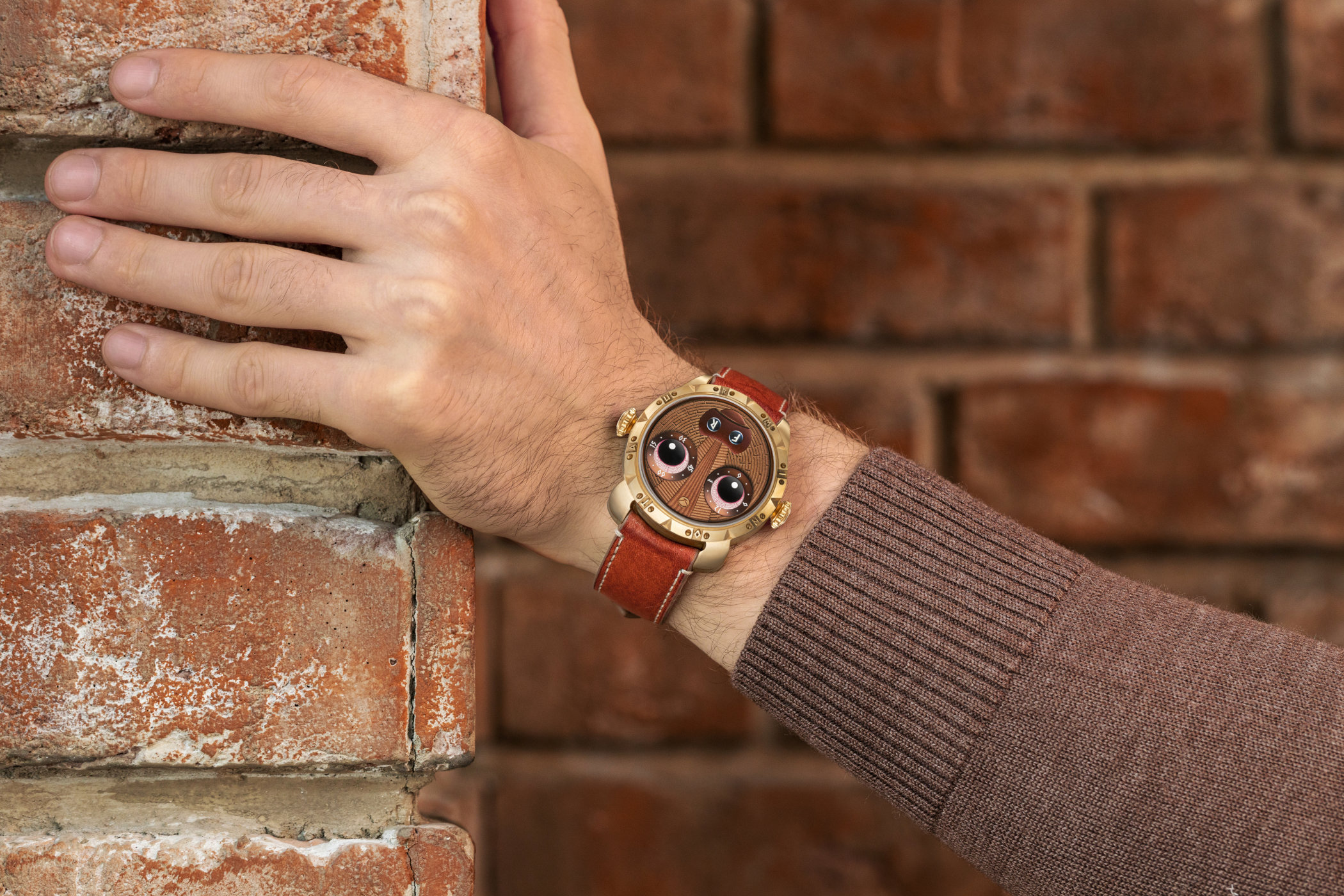 The Konstantin Chaykin Minotaur Special Edition comes on a cognac leather strap with a vintage finish. It is limited to 8 pieces in total, and costs EUR 18,500. To me this watch is a perfectly good reminder that every now and then we should take a break from all seriousness in life, and keep in mind that watches are meant to be enjoyed. So why not wear one that looks back at you, every time you look at it?