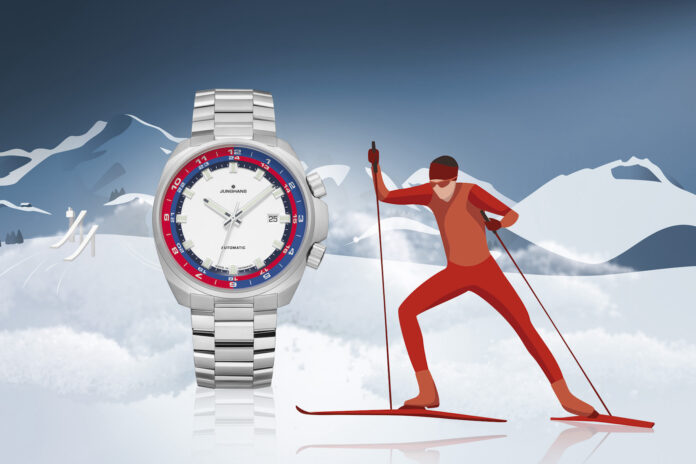 To celebrate its role as the official timing partner of the FIS Nordic World Ski Championships, Junghans launches a groovy GMT compressor-style model with a strong 1970s vibe. Held from 22 February to 7 March 2021 in Oberstdorf, Germany, the championship pits skiers from all over the world in a series of events (cross-country, ski jumping and Nordic combined). In addition to being the official timekeeper of the event, German ski jumper and current world champion of Ski Flying, Karl Geiger is a brand ambassador for Junghans.  Decked out in the red, white and blue colours of the FIS Nordic World Ski Championships, the sturdy 1972 Automatic FIS edition is equipped with Junghans’ in-house Trilastic shock-absorbing system. Limited to 500 pieces, the watch comes with an integrated steel bracelet and funky rally straps.

For many of us, Junghans is the epitome of a German watch brand with minimalist, Bauhaus-inspired watches. Established in 1861, by 1903 Junghans was the largest clock and watch manufacturer in the world. It has produced over half a billion timepieces in its lifetime and has a rich and thoroughly documented archive.

With its two crowns, the Junghans 1972 Automatic FIS Edition might well be mistaken for a compressor or super compressor watch, a distinctive style of dive watch with two crowns and a unique sealing system allowing the watch to become more watertight the further it descended. The additional crown on compressors was used to adjust the internal timing bezel. The Junghans watch is not a diver – it can only hack depths of 30 metres – but it relies on the second crown at 2 o’clock to adjust the second time zone featured on a 24-hour scale picked out in red and blue. 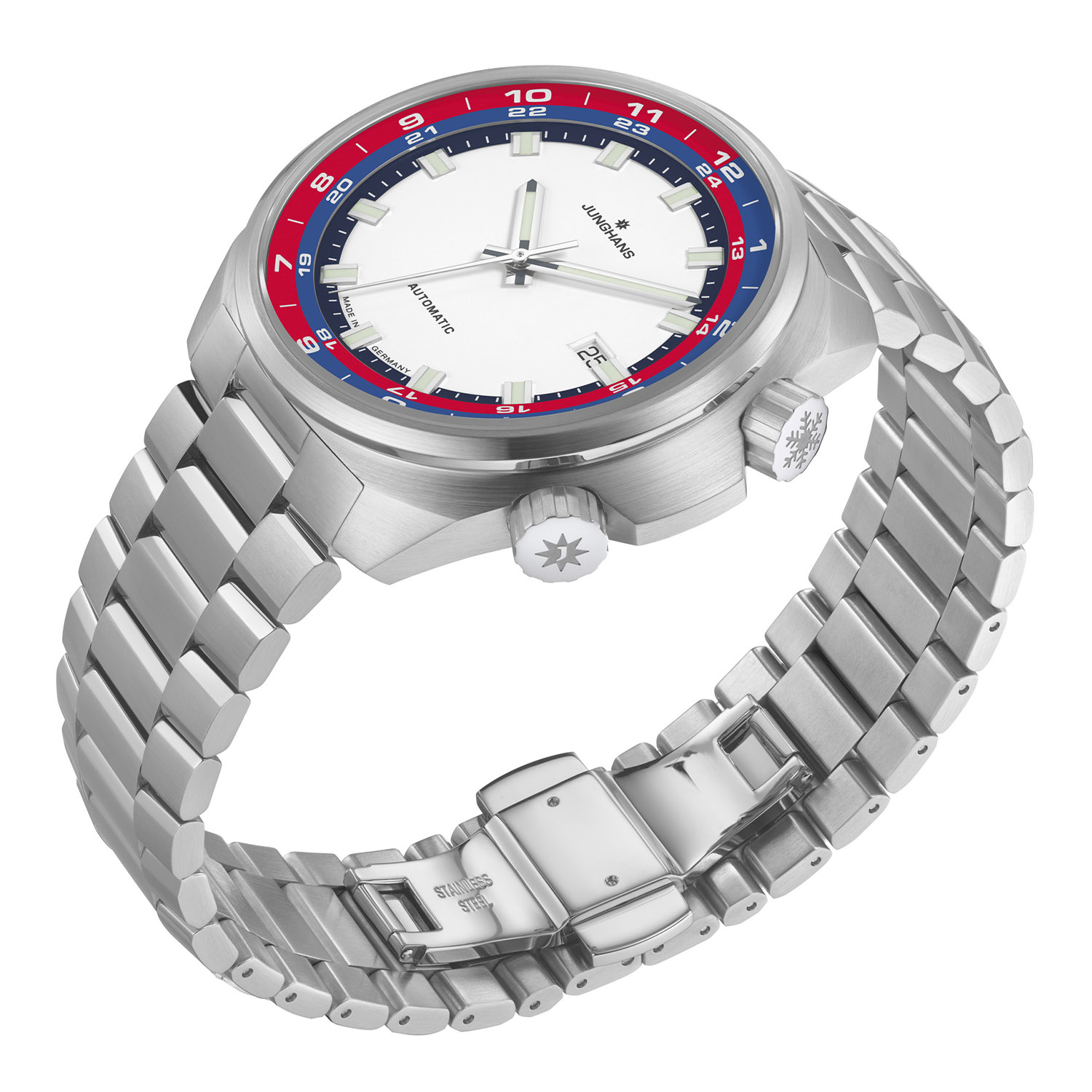 The beefy stainless steel case weighs in at 46.9mm with a height of 14.5mm. Its vintage cushion-shape is interrupted by the prominent crown guard between the two screw-down crowns at 2 and 4 o’clock. Brushed throughout to underscore its sporty vibe, the powerful case has a screw-down caseback engraved with the FIS Nordic World Championships logo. Another detail alluding to the skiing event is the snowflake engraved on the crown at 2 o’clock.

Picking up on the red, white and blue colours of the FIS Nordic World Ski Championship and tapping into a very 1970s colour scheme, the dial has an external hours ring in red and blue complemented by a second ring, also in red and blue, for the GMT function. As mentioned, the 24-hour GMT ring is set via the crown at 2 o’clock. A third ring, this time picked out in dark blue, hosts the thick lumed indices and minutes track while the central area of the dial is snowy white. The hour and minute hands are also thick and treated with environmentally friendly luminescent material, and there is a date window at 3 o’clock that doesn’t truncate the index. A domed sapphire crystal protects the dial with anti-reflective treatment on both sides. 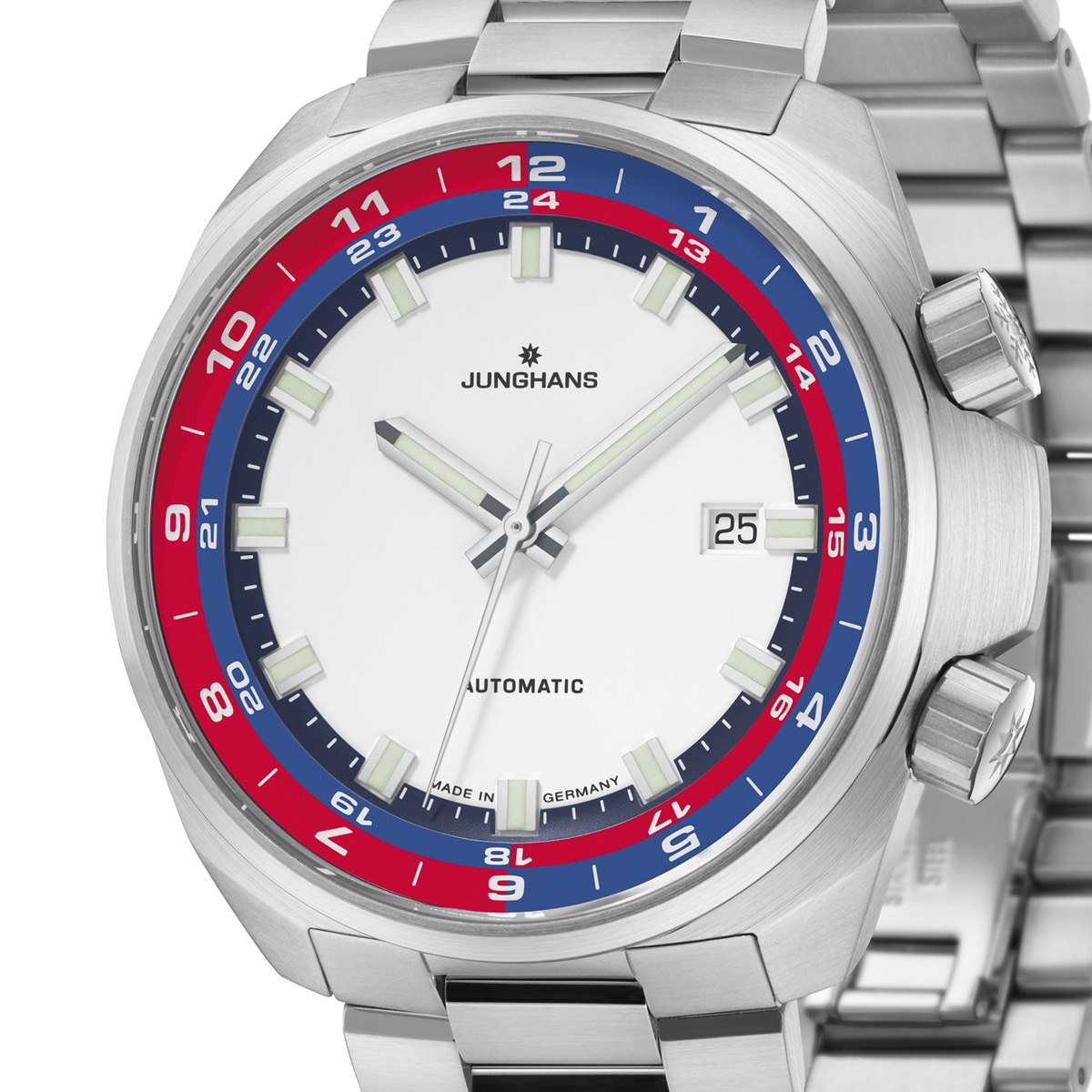 In the 1950s, Junghans developed a 3-point shock absorber known as the Trilastic used inside the calibre J93/1 produced between 1954-1966. The automatic movement inside the watch  – calibre J830 –  also has a 3-point shock-absorbing system based on the historical Trilastic. Beating at 28,800vph, the movement is anti-magnetic to DIN 8309 standards and has a power reserve of 48 hours.

The watch comes with an integrated stainless steel bracelet with a folding clasp and two additional rally-style straps in dark blue and white with sporty perforations. A tool is provided to release the spring bar and exchange the strap.

The Junghans 1972 Automatic FIS Edition is limited to 500 pieces and retails for EUR 1,590 (incl. tax). More information at Junghans.

MONOCHROME Watcheshttps://monochrome-watches.com/
This post first appeared on MONOCHROME Watches - An online magazine dedicated to fine watches.
Vorheriger ArtikelBuying Guide – Our Favourite Watches of 2021… So Far
Nächster ArtikelNews – Girard-Perregaux and Aston Martin Announce Partnership, And We Talk With GP’s CEO About It