A couple of years ago, the “vintage watch of the future” was back. Indeed, a small team had decided to bring back Ikepod to life, this mysterious brand with a design that most of us can easily recall, founded in 1994 by Oliver Ike and Marc Newson, before it stopped production in 2012 when Newson left the company. The cult design was revived in 2018 yet with another strategy in mind, the new collection being all about design and affordability – indeed, it was quartz powered. Until now… as brand goes back to mechanical with the new Ikepod Megapod Automatic. Same space-like design, same audacity, but for a fraction of the price and launched via Kickstarter.

Background of a complex success story

Back in the 1990s and early 2000s, the state of the watch industry was not yet what we know today. Watchmaking was slowly recovering from the quartz crisis, mechanical watches were only beginning to be cool again and most of the independent watchmakers we know today were not even existing. There was a brand, however, that started a trend for exclusive watches with a bold design: Ikepod. Simply, these watches were among the coolest pieces you could get back then. They were different, voluntarily overly-designed, large, and mixing modernity with slightly outdated design elements, with a deliberate 1950s UFO style. This was the result of the work of designer Mark Newson, later involved in the design of the Apple Watch, which made the watch the ultimate item for designers, artists, architects and Silicon Valley entrepreneurs. But these watches weren’t cheap… at all! 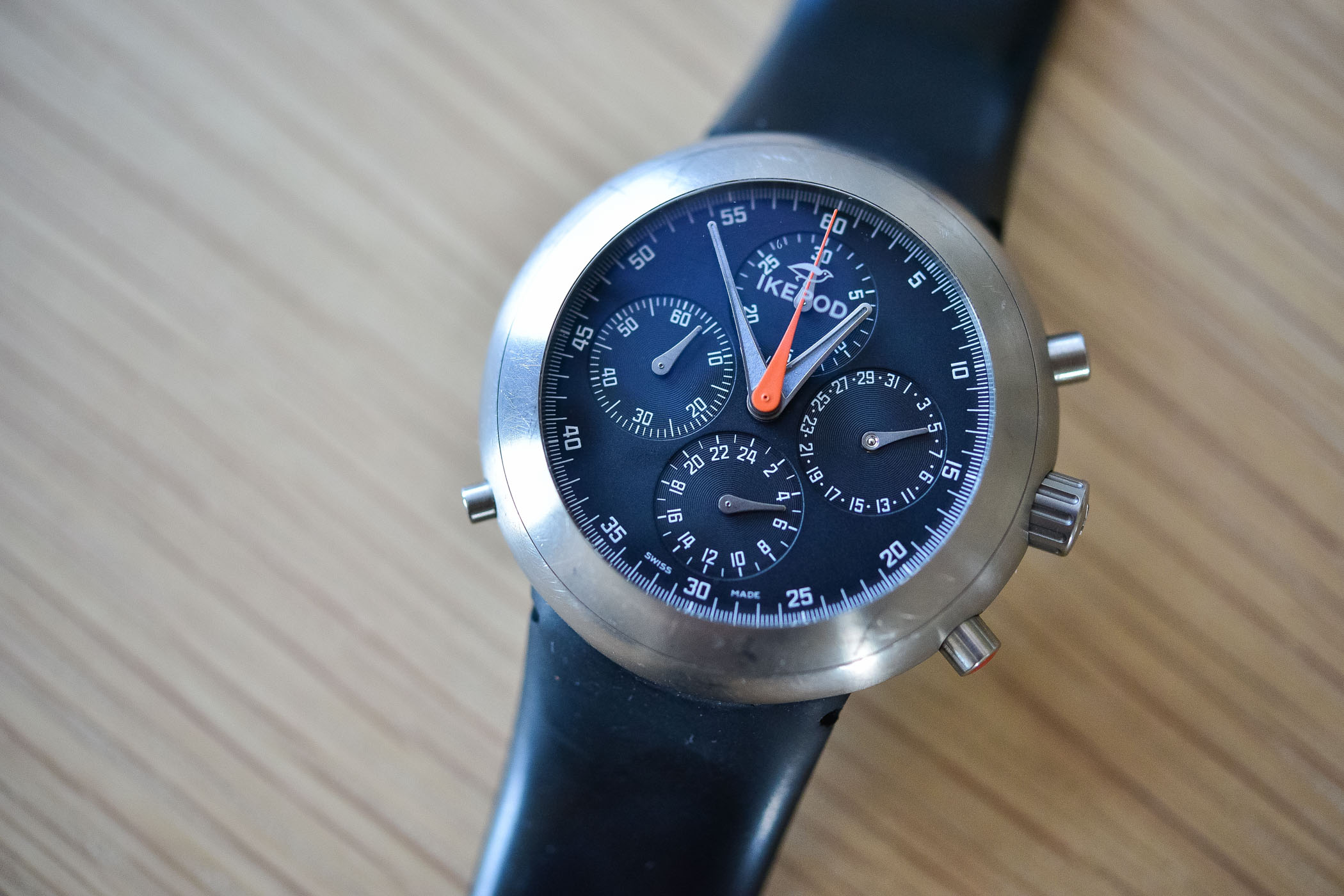 An example of Newson-designed Ikepod, a 2000s Hemipode chronograph

The brand was founded in 1994 and produced various models, from the Megapode, the Seaslug, the Hemipode, the Horizon or the Solaris – most of the time with a similar formula: a sleek, ultra-clean pebble-shaped case, complex dials with optical illusions or 3D textures, colourful elements and automatic movements. The company had its ups and downs. Ikepod was declared bankrupt in 2006 but was relaunched in 2008 and then put on hold in 2012, when Marc Newson left the company he co-founded to move to connected watches. 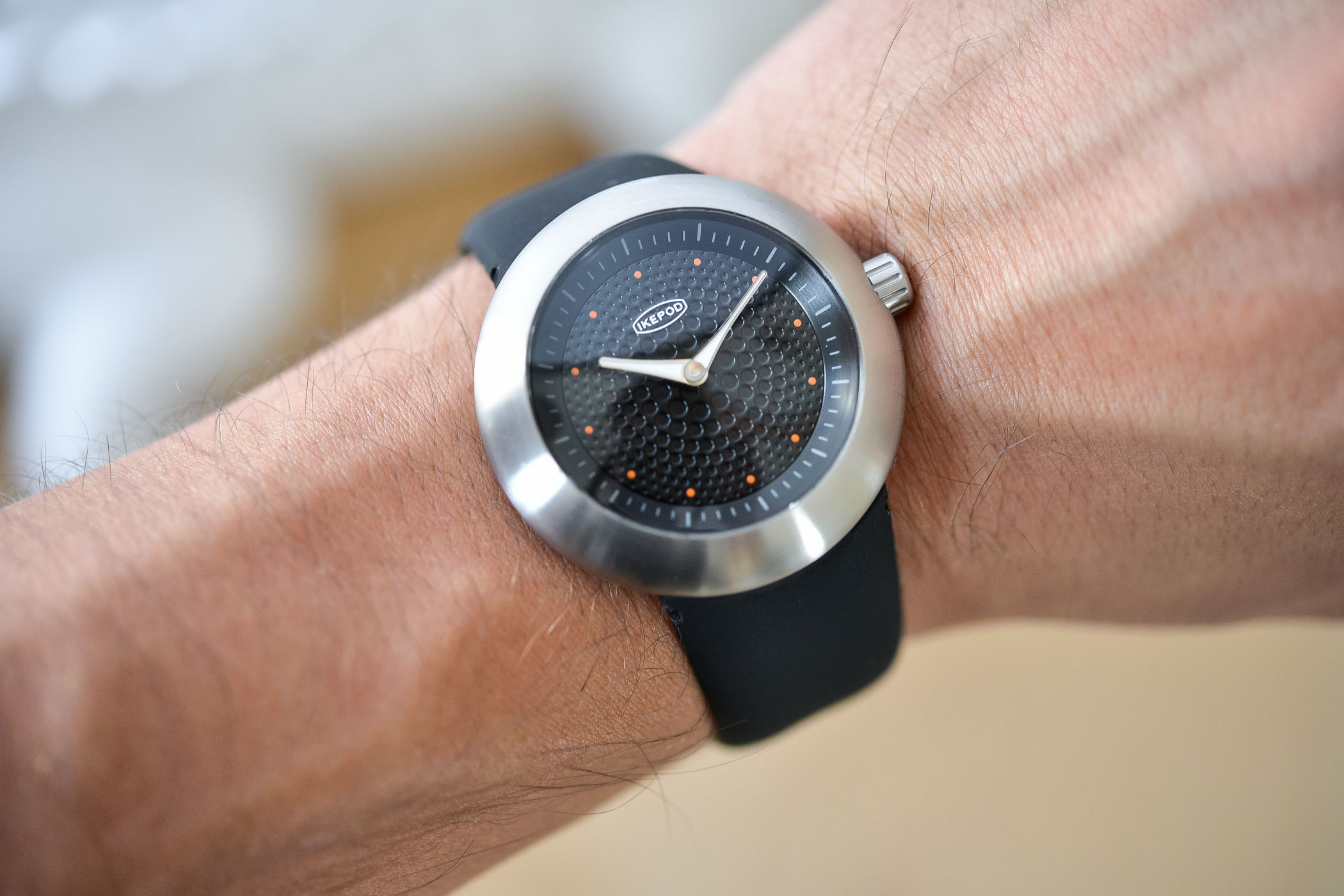 One of the 2018 editions of the Ikepod Duopod, echoing the dial of the Horizon watch launched in the 2000s.

The brand was dormant from 2012 to 2018. Several groups/investors showed interest in relaunching Ikepod but the brand was finally acquired in April 2017 by three new investors, including majority shareholder and new CEO Christian-Louis Col. But instead of doing the same high-end strategy again, they’ve decided to make Ikepod a brand focused on design first, with accessible watches. No more complex movements, no more precious metals, but good designs done with renowned designers, including Emmanuel Gueit. This gave birth to a first collection, a time-only and a chronograph, named Duopod and Chronopod, both quartz-powered… sadly for us. But it retained the patented round-shaped watch design, the original UFO logo on the dial and the Hemipod (exotic quail) logo on the crown and the sense of design so dear to the brand and its collectors, yet with a few concessions to make it accessible. 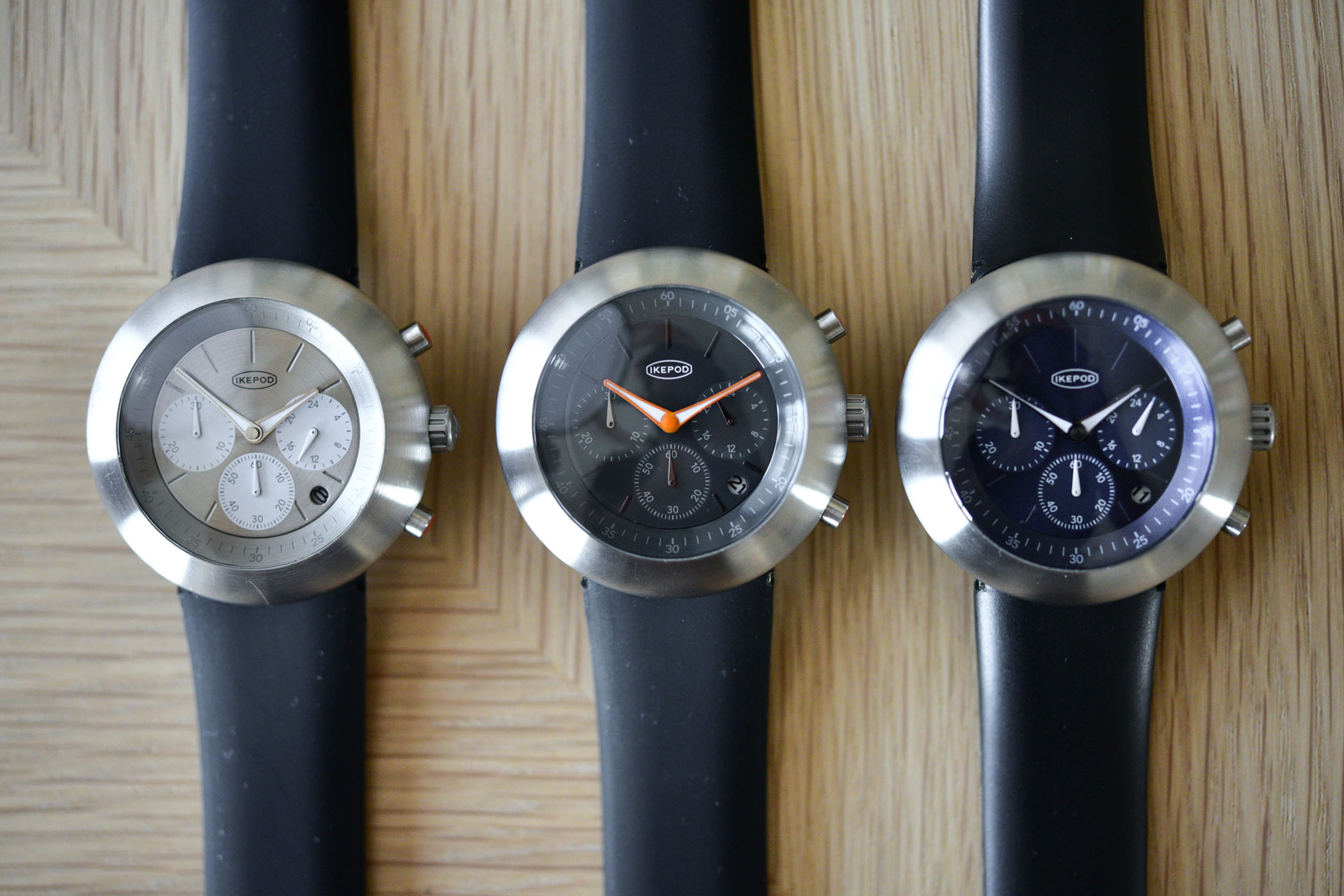 Some of the 2018 chronograph versions, the Ikepod Chronopod.

After the success of the original collection, Duopod and Chronopod, with more than USD 385,000 of pre-orders generated in a few months, the brand has now decided to enlarge its offering with something that is far more interesting to us, an automatic model named the Megapod. And if you’re into watches, this name should sound familiar. 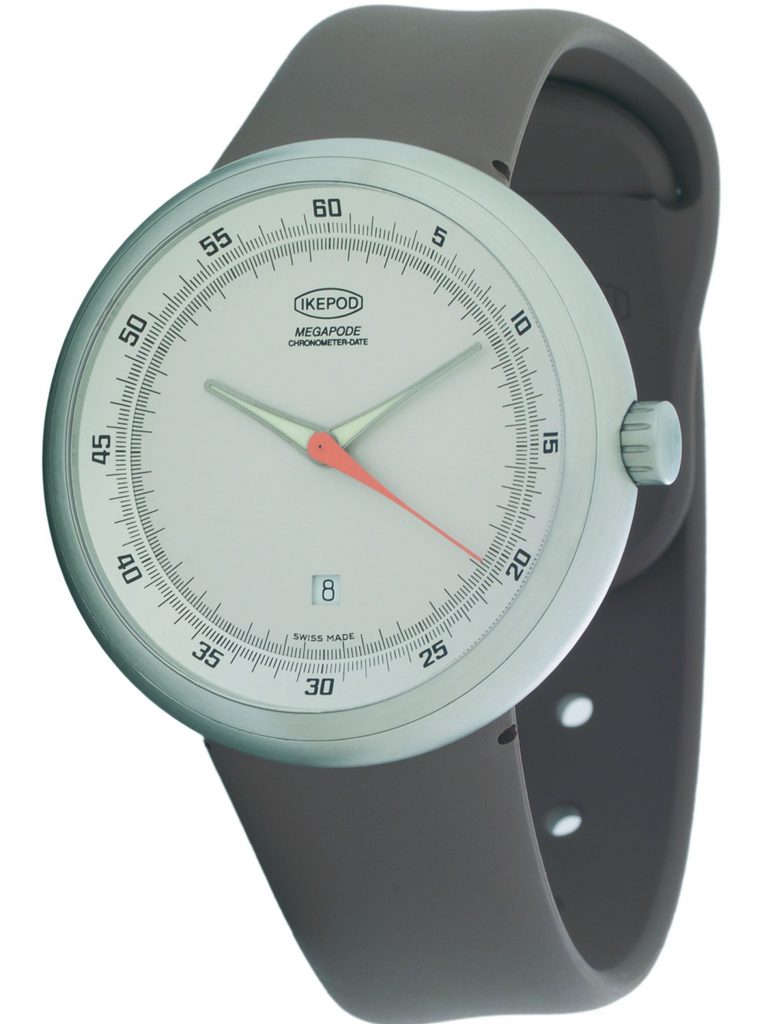 The original model, the Ikepod Megapode (with an “e” at the end)

The Ikepod Megapode (with an “e” when talking older models) was the cornerstone of the Ikepod collection for years, a time-and-date watch with chronometer-rated automatic movement and large diameter. This watch, even though relatively simple, featured all the iconic elements the brand was known for: pebble-like case with movement mounted from the top, rubber bracelet with signature buckle, orange accents, oversized dimensions. And yet, it was far from accessible, with a retail price in 2008 of CHF 12,500… 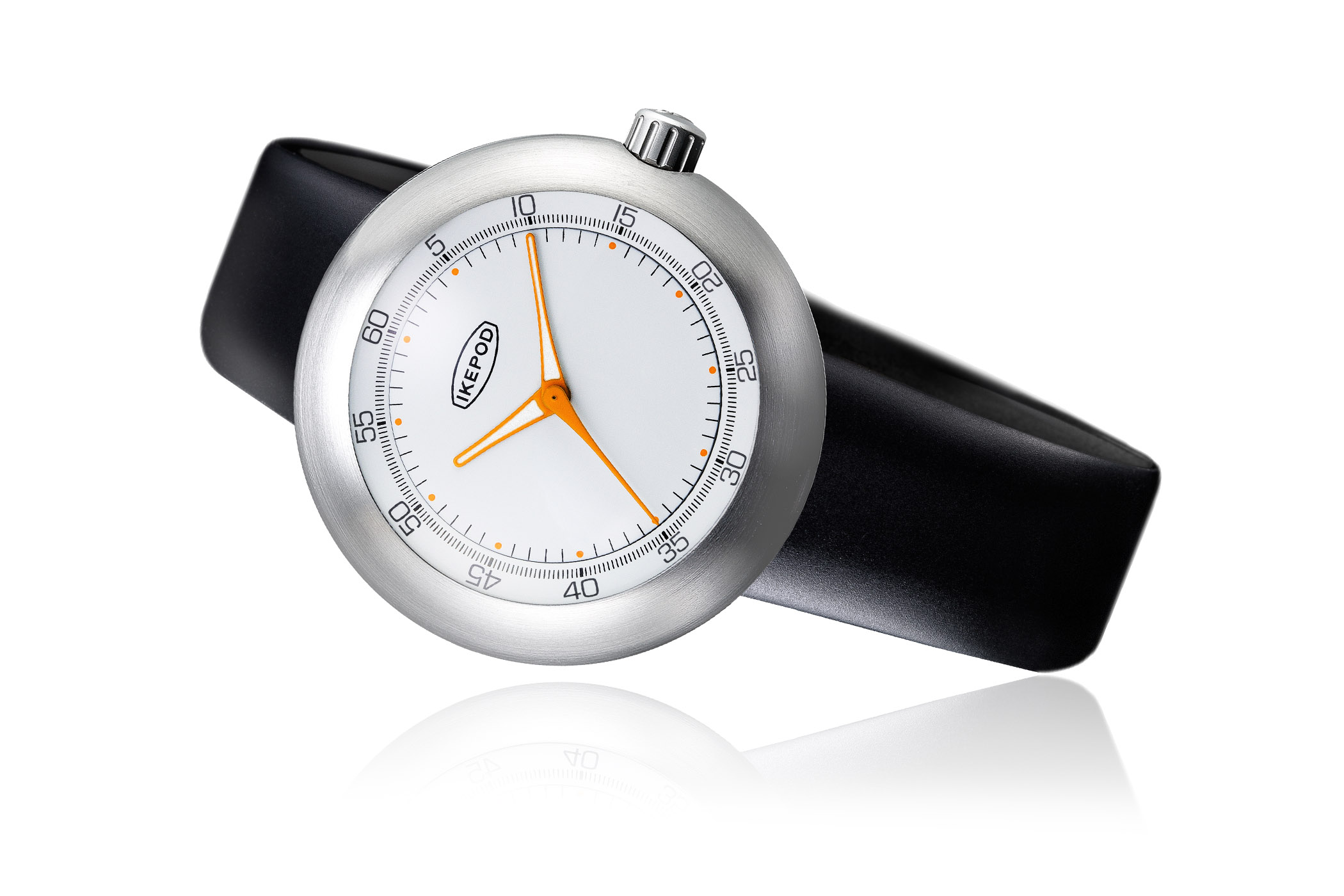 Today, Ikepod presents an updated version of this watch named the Megapod Automatic (without an “e”), which retains most of the design codes, yet thanks to multiple concessions, will be priced at a tenth of the original model – and even less during the Kickstarter campaign. 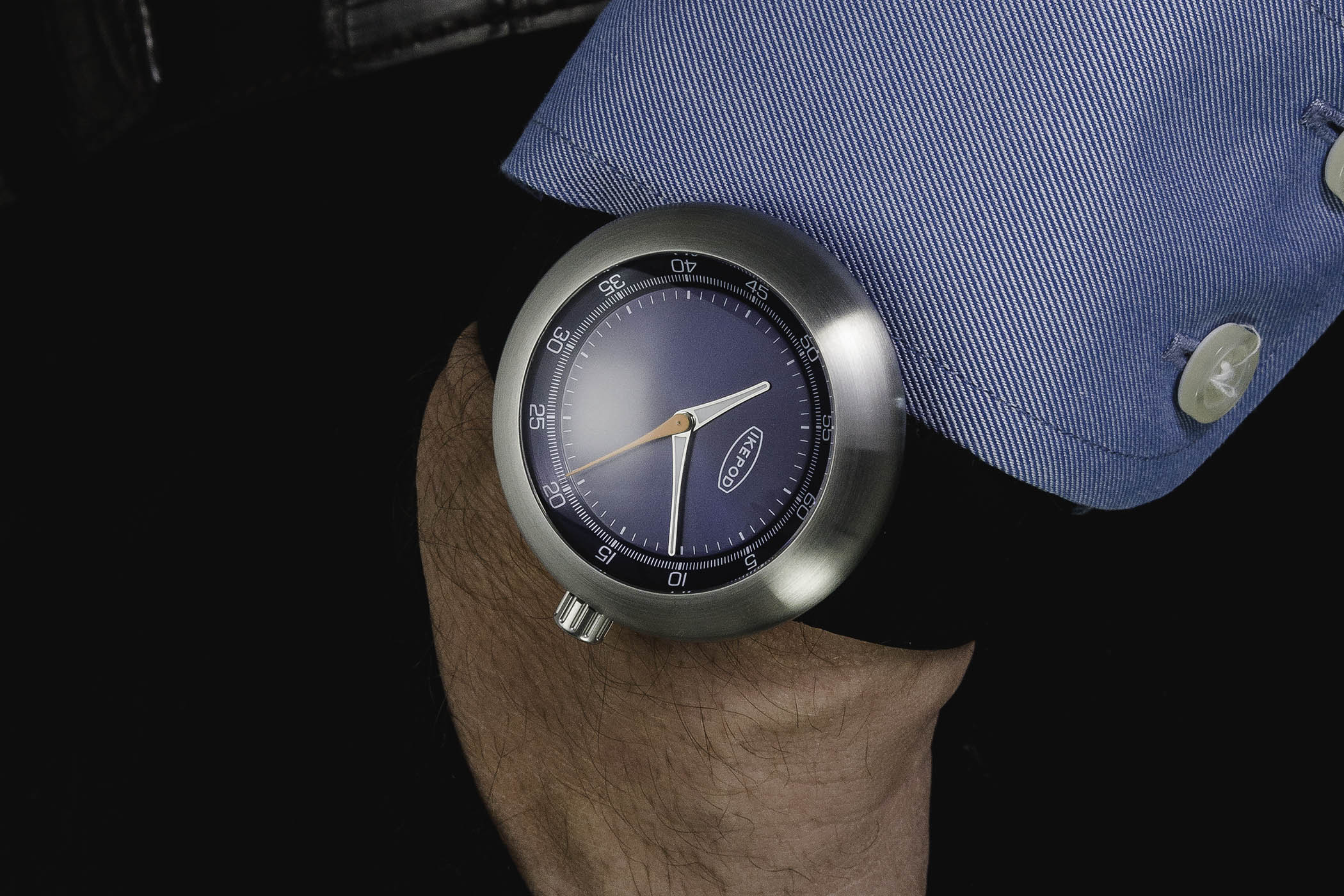 As indicated by its name, the Megapod is the largest of the models in the collection. Its round, “flying saucer” case measures 46mm in diameter. It is made of brushed stainless steel, it is topped by a sapphire crystal that flows into the curves of the case and is classically constructed, with the movement encased through the screwed caseback (less expensive to produce, easier to assemble, easier to service). Don’t be scared by the 46mm diameter though, as the watch wears far smaller than you might think, being “lugless”. Due to way the strap is attached to the case, the lug-to-lug measurement is actually smaller than most 42mm watches. The case is water-resistant to 50 meters. 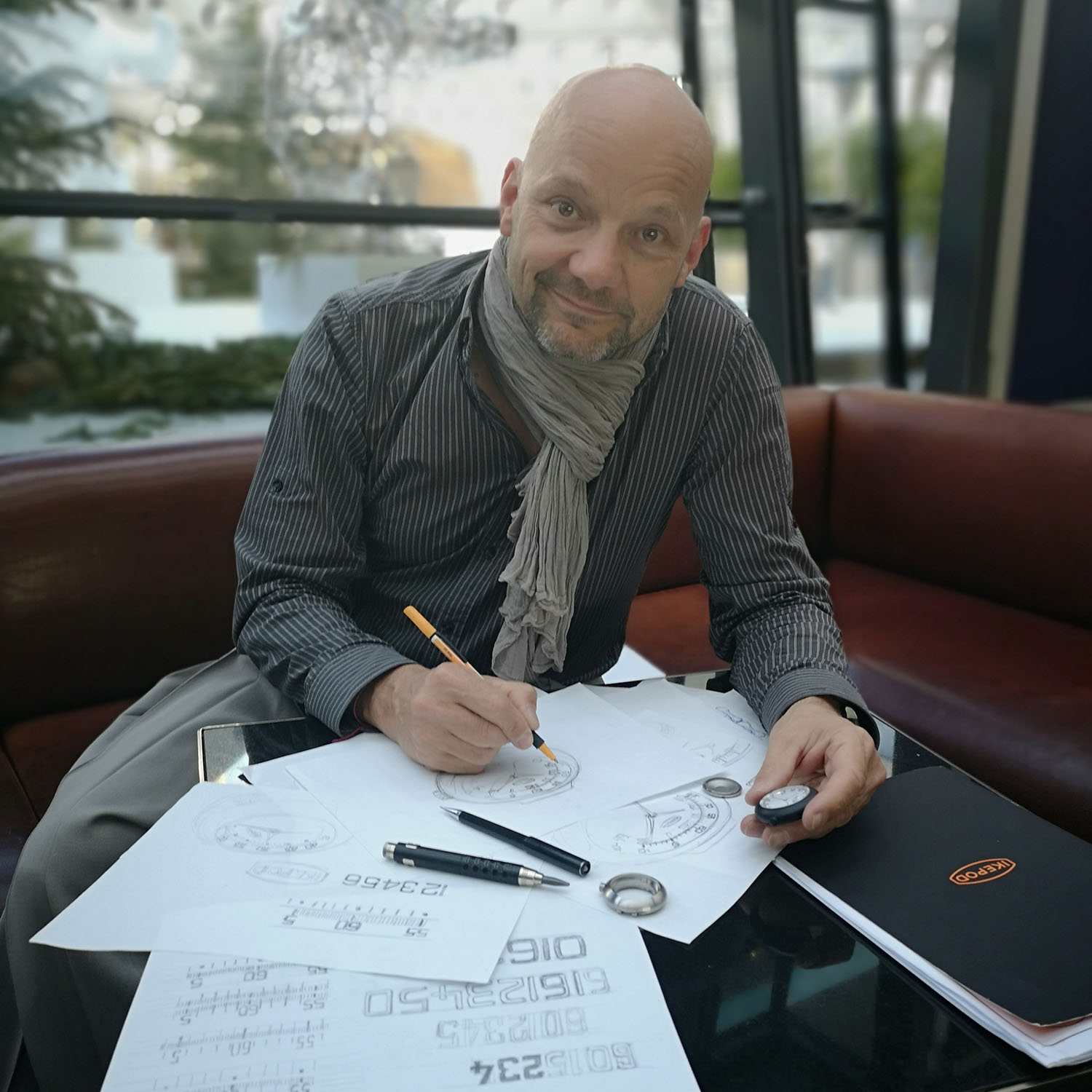 After relying on Gueit for the first models, The design of the Ikepod Megapod Automatic would then be entrusted to Alexandre Peraldi, ex-Richemont and Artistic Director at Baume and Mercier. His work is mostly seen on the dials, with 3 main concepts – M 000 series, M 100 series and M 200 series – each derived in multiple colours ranging from blue, silver, grey, white and black, all with different textures – brushed, satin-finished, matte. 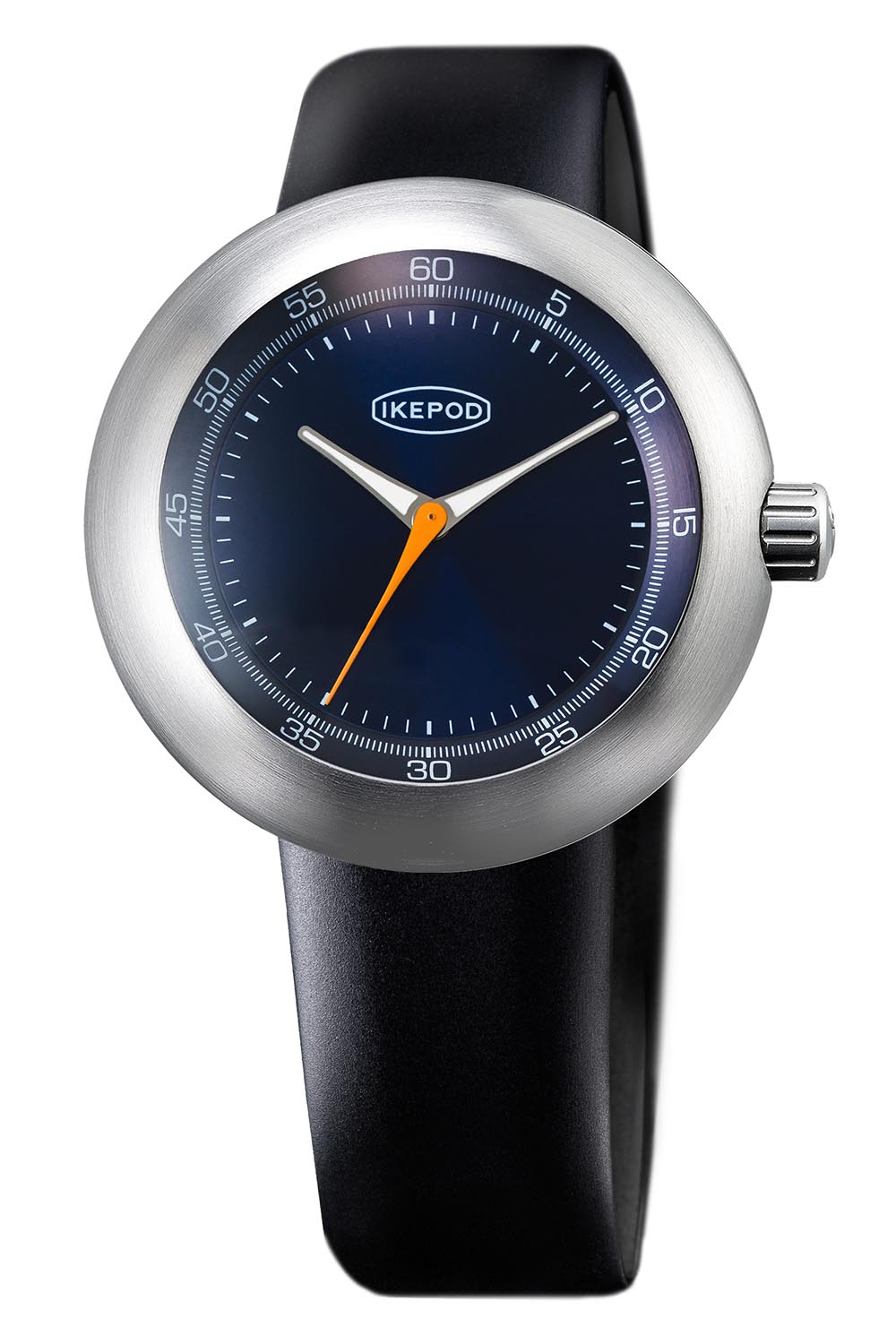 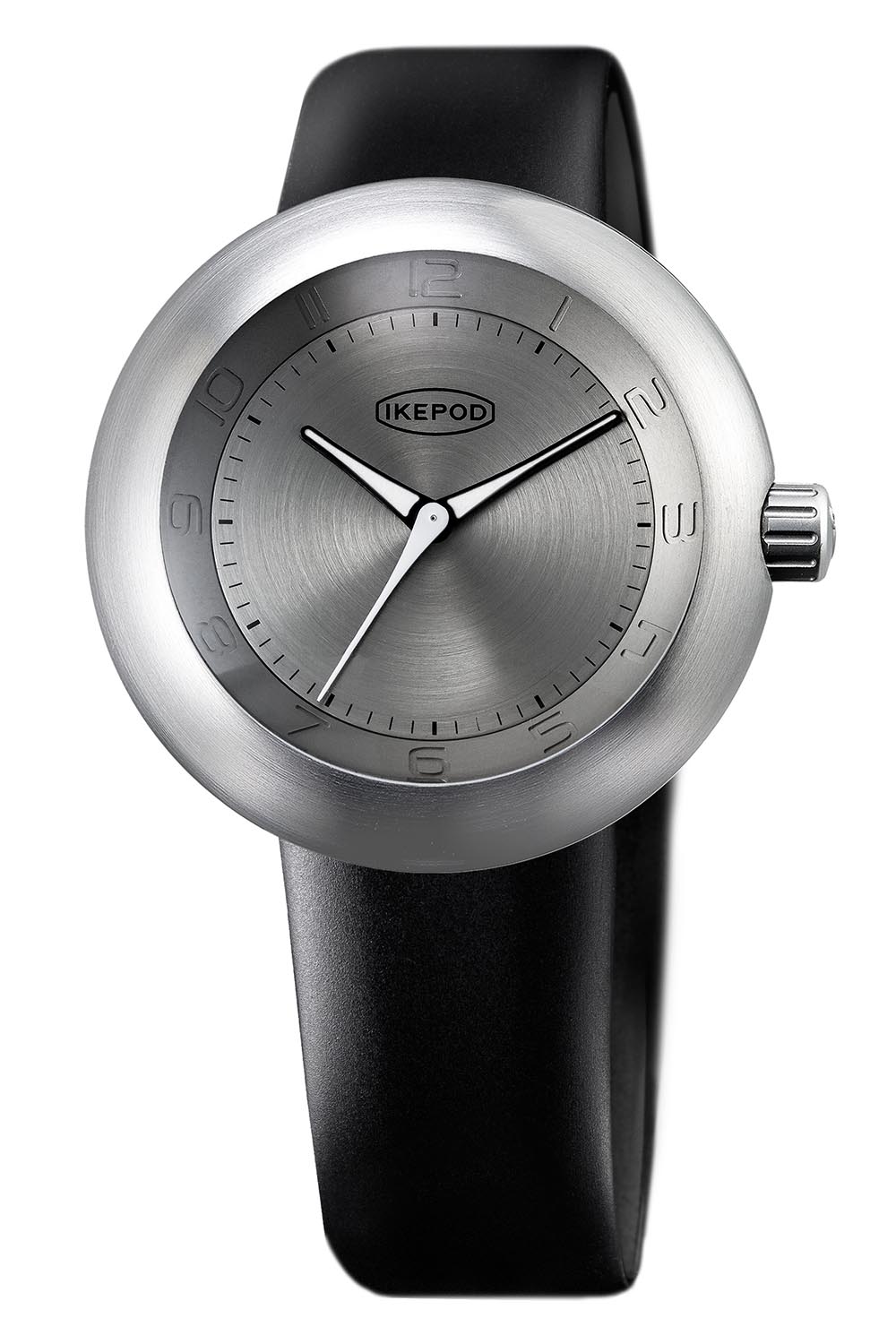 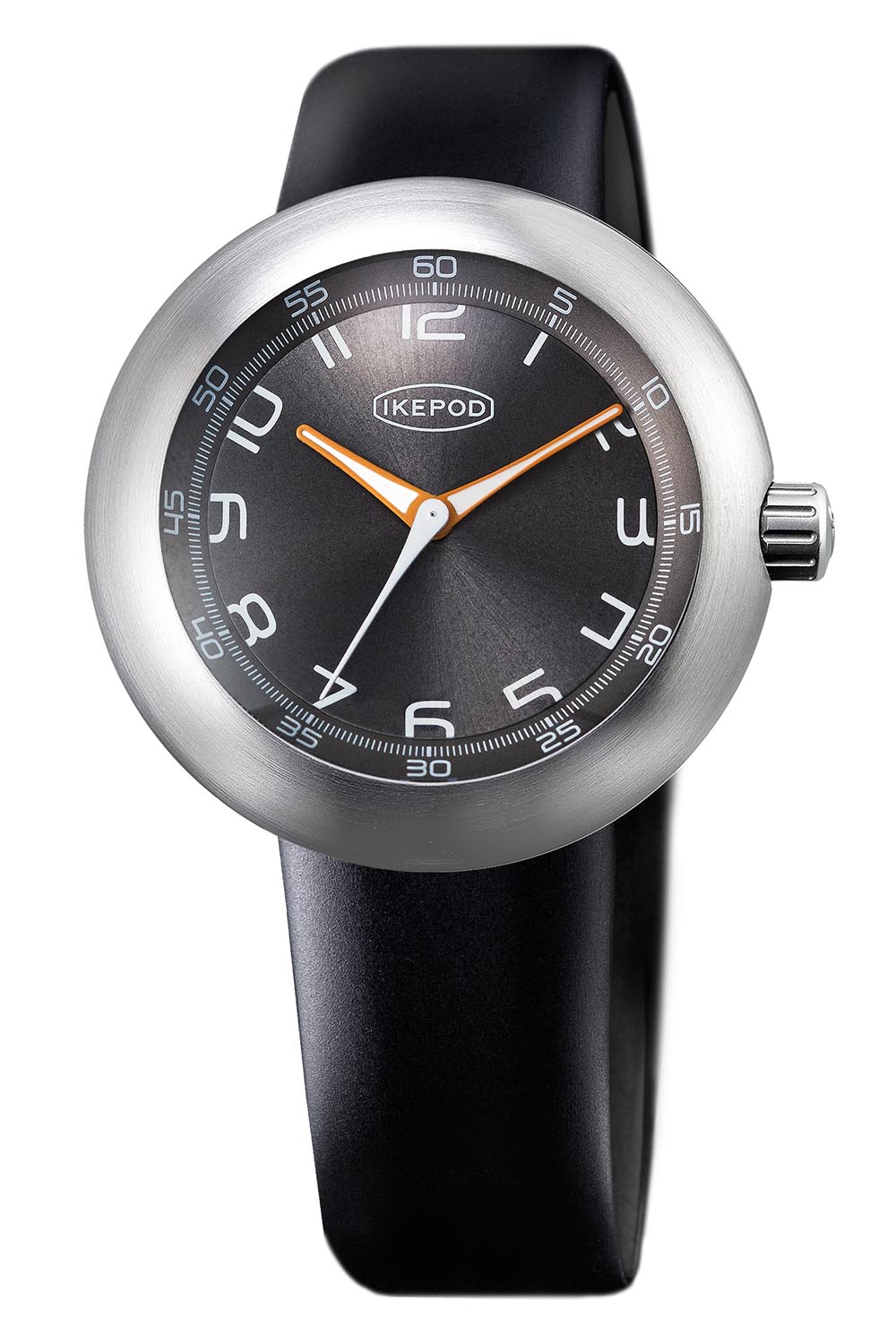 The designs of the dials remain totally in line with the original Ikepod concept: minimalist, textured, with touches of colours and with modernist fonts. The display has also been updated and the new Megapod Automatic is now a no-date model, which certainly benefits to the sleekness of the watch. There will be 10 variations presented during the campaign, including two Kickstarter-only models. All the watches are worn on black silicone straps that resemble the original one found in the 2000s watches, however, with a standard pin buckle – the system used by older Ikepod watches is now owned by Apple. 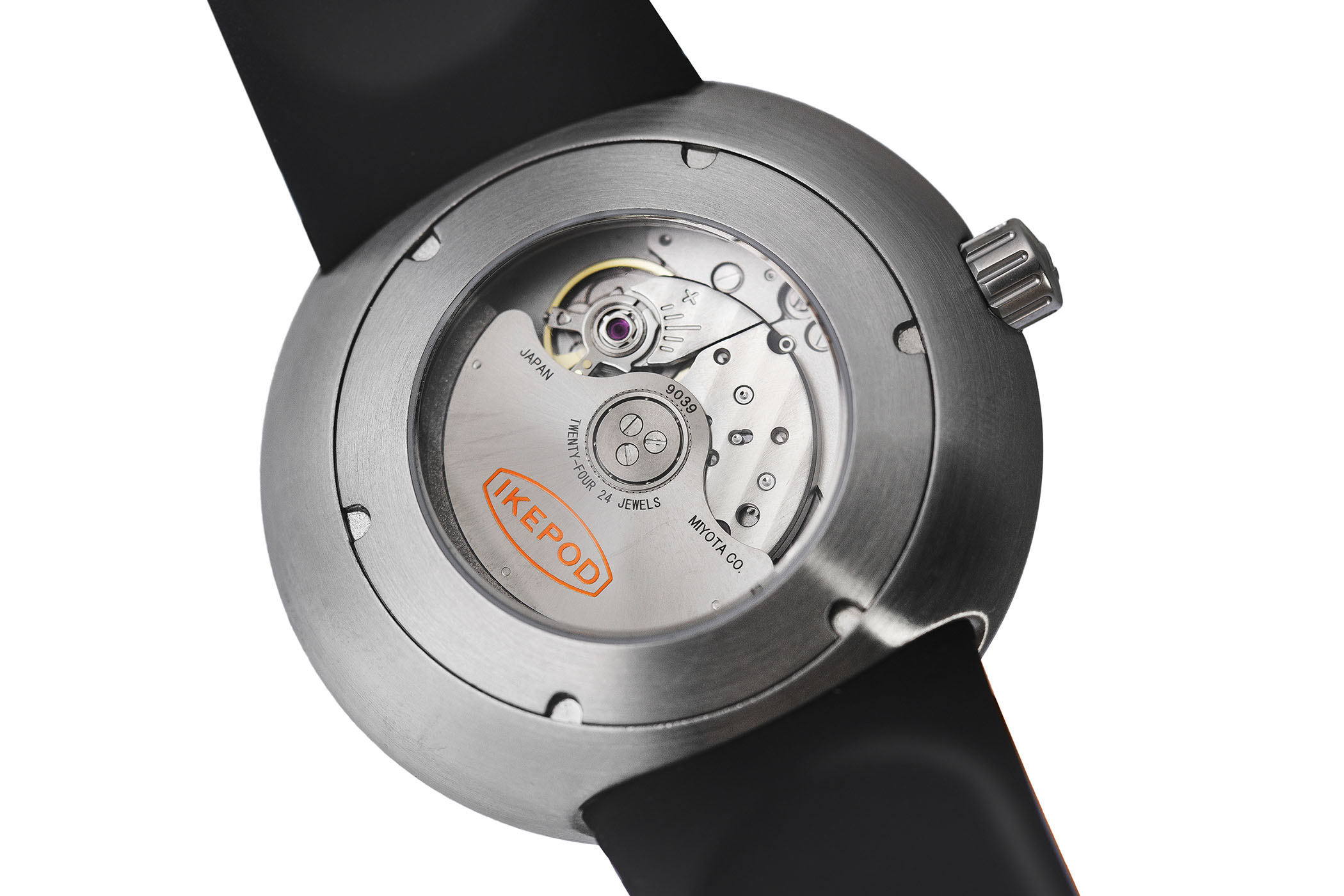 The main update, something we were hoping to see, is the integration of a mechanical movement in a modern Ikepod watch. This is what you’ll get to see under the sapphire caseback of the Ikepod Megapod Automatic, powered by a trusted Miyota 9039 movement, in order to keep the price in the reasonable zone. This movement, displaying the hours, minutes and sweeping seconds, is known to be reliable and to be used by multiple accessible watches. 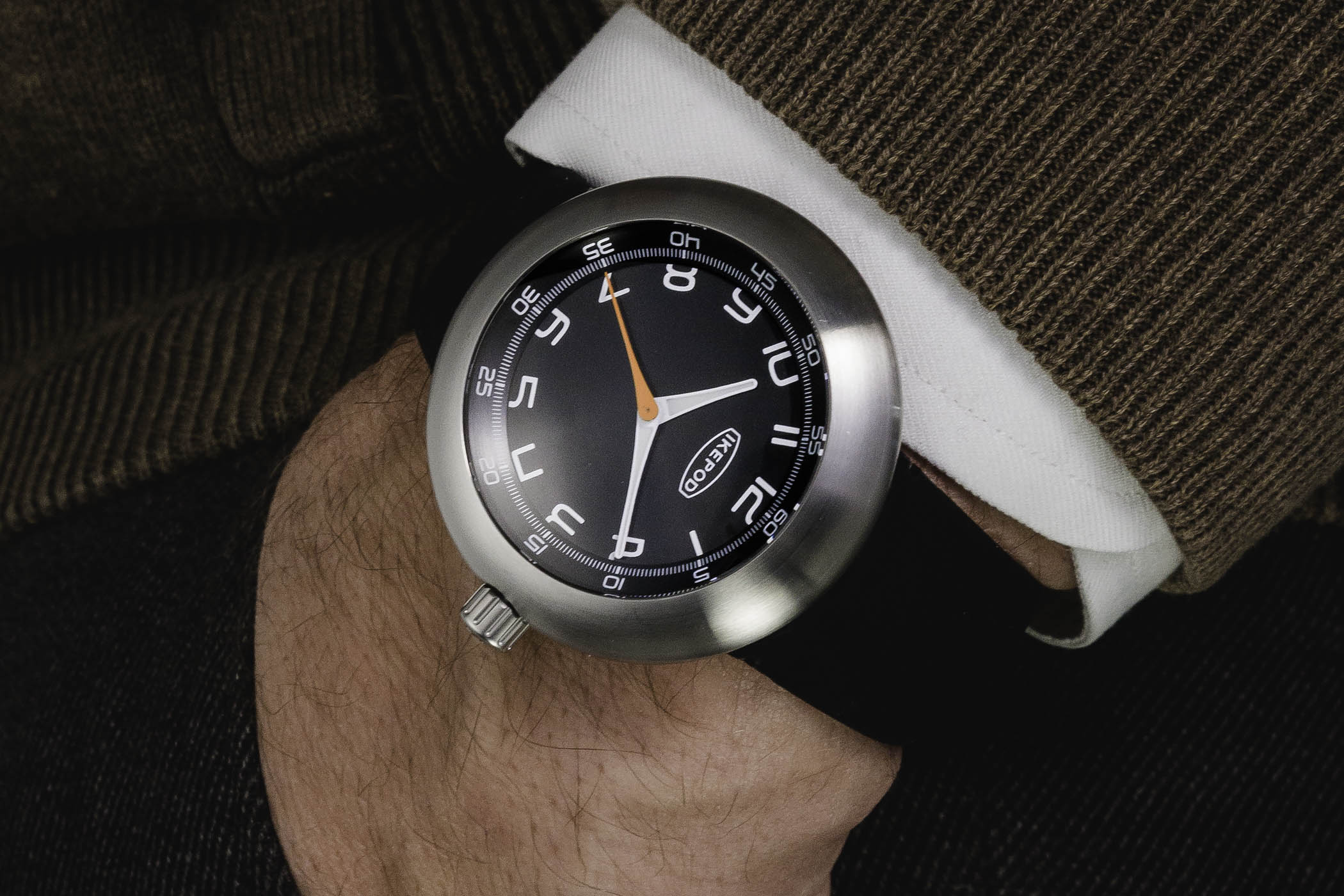 This movement, combined with an assembly in Hong Kong (in a well-known watch manufacture), with dials made in Taiwan, is the recipe for high quality but prices that have dropped 90% compared to the original model – from CHF 12,000 to now CHF 1,250. The watches will come with a 2-year warranty and the first 250 orders will be delivered in June 2020, the rest in November 2020.

How to get the Ikepod Megapod Automatic?

The new Ikepod Megapod Automatic is launched today on Kickstarter and will be available for the coming 15 days at an early-bird price of CHF 740. You can secure your example here, at kickstarter.com.

More details about the watch at ikepod.com.