It seems that Hamilton is on fire, with multiple well-received, vintage-inspired releases, such as the Khaki Pilot Pioneer, the Khaki Field Mechanical or the Intra-Matic. As we’re still in 2019 and still celebrating the 50th anniversary of the Chrono-Matic/Calibre 11 movement, the brand introduces another watch modelled on a glorious watch – and this time, it won’t be for the faint-hearted. Meet the new Hamilton Chrono-Matic 50 Auto Chrono “Count-down”. 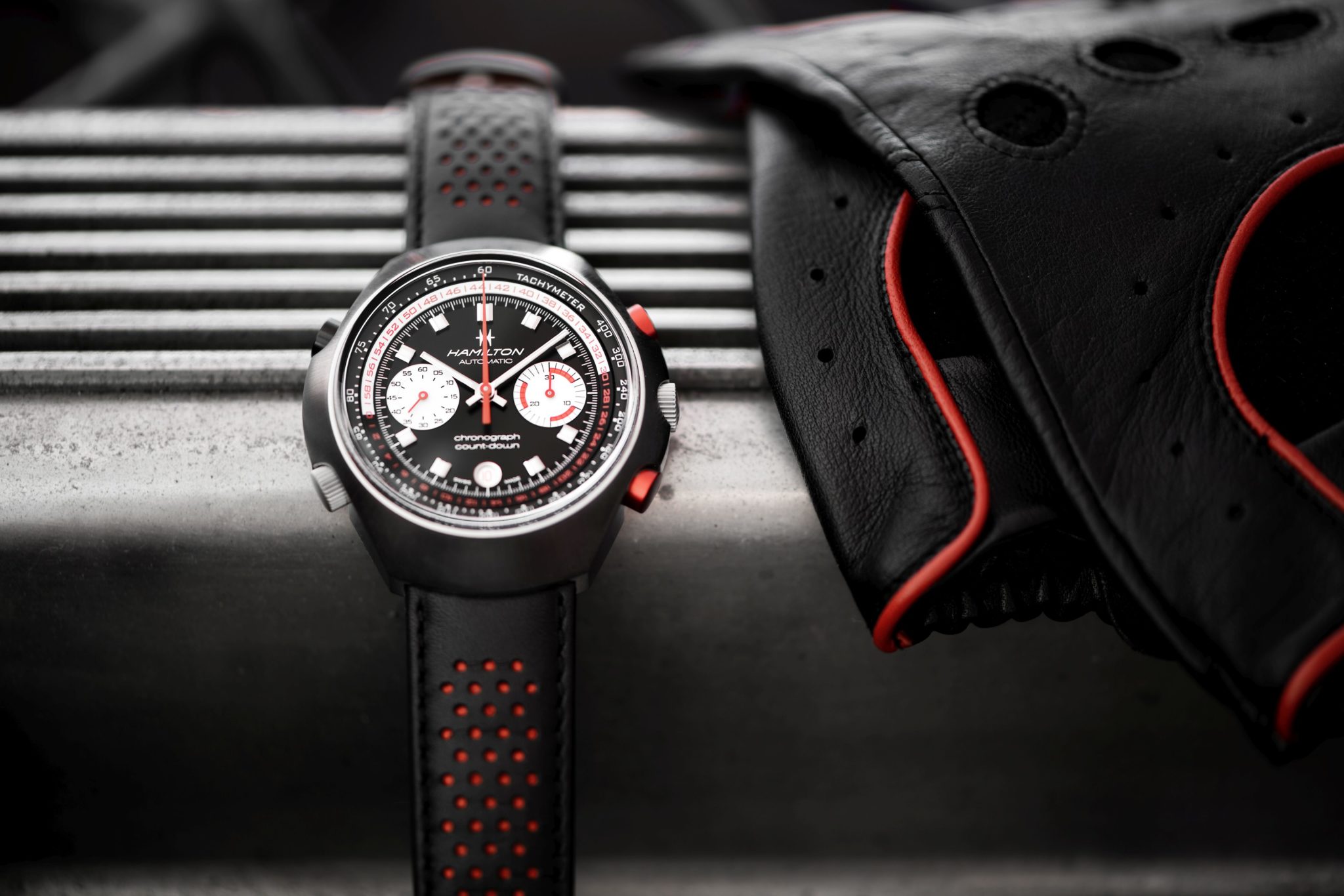 A reissue of the Count-down GMT Chrono-Matic

After reissuing the Hacked, the H-10 and the Chrono-Matic, ex-American, now Swiss brand Hamilton looks at another of its glorious models, the base for today’s revival watch: the Chronograph-E or Count-down GMT Chrono-Matic. Together with Heuer, Büren and Breitling, helped by Dubois-Depraz, Hamilton was one of the first manufacturers to present an automatic chronograph, a movement named Chrono-Matic or Calibre 11 depending on the brand. This movement is characterised by its modular architecture, with a chronograph plate fixed to a micro-rotor movement, and its pushers on the opposite side of the crown. 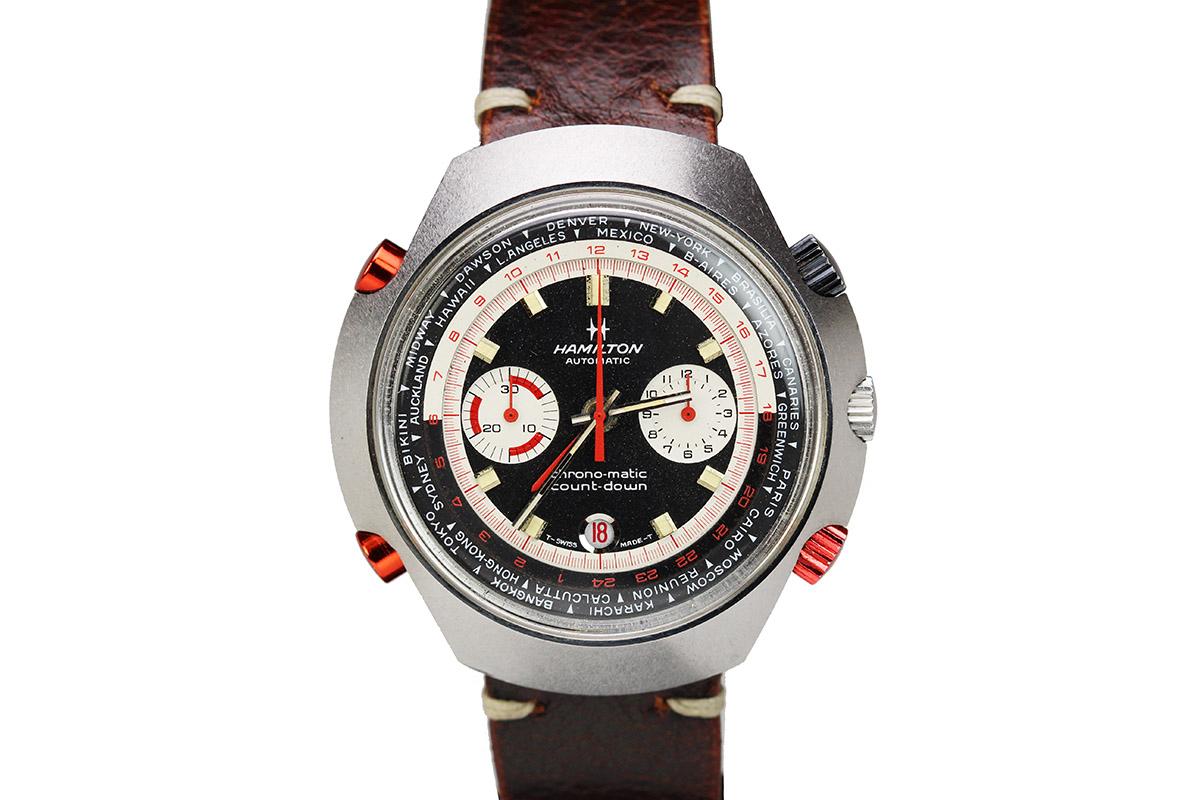 After the inaugural 1969 Chrono-Matic, the brand continued to use this movement and evolutions in multiple shapes, including a bold, pilot-inspired, early-1970s watch named Count-down GMT Chrono-Matic. This watch, with its massive 48mm case, uses the Chrono-Matic calibre 141 with additional GMT function and two crowns, used to rotate the 24h and the time-zone bezel rings.

For its newest model in the American Classic range, Hamilton doesn’t go for the easiest watch, since the original Count-down GMT was a complex watch, with complex case/dial/movement, which is why the new Chrono-Matic 50 Auto Chrono isn’t 100% legit but pays tribute to the whole concept. 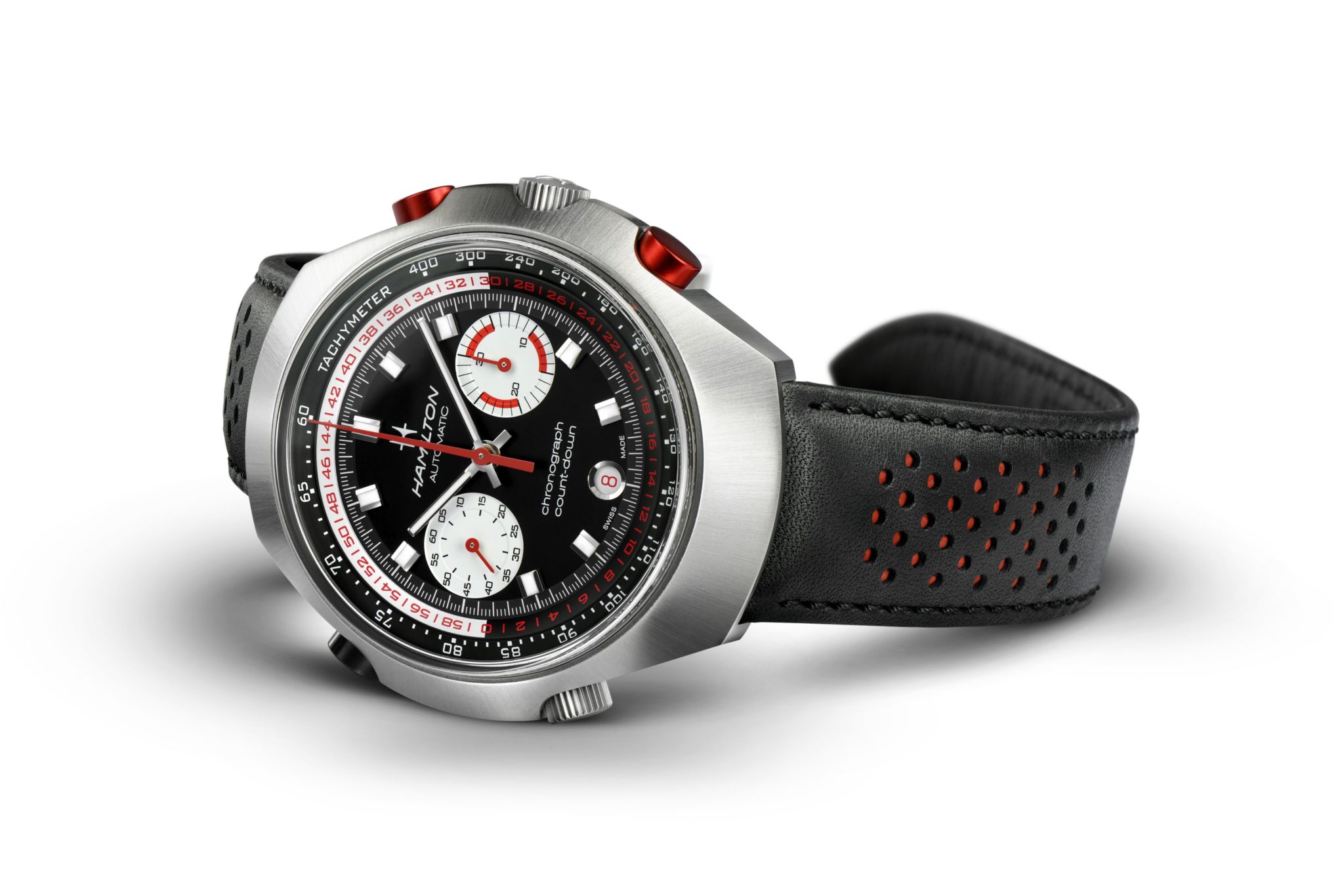 First, the case of this new Chrono-Matic 50 Auto Chrono retains the original shape – a helmet-shaped case, typical of the early-1970s production, with integrated lugs and egg-like shape. So are the proportions, as once again, this watch is massive, with 48.5mm from 3 to 9 o’clock and 51.50mm lug-to-lug – faithful to the original dimensions though. The case features a period-relevant finishing and is radially brushed all over. 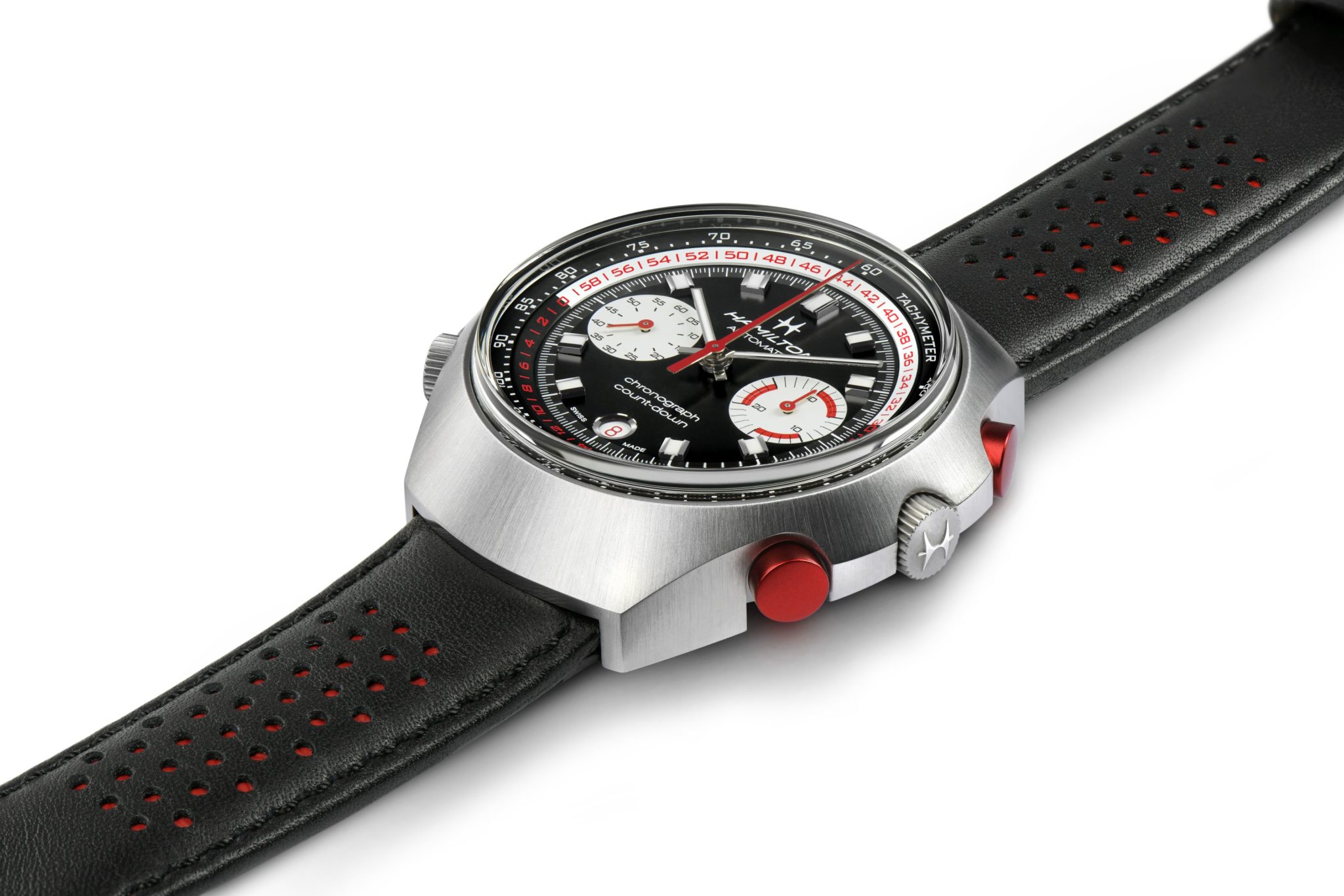 Second, the original watch features no fewer than 5 pushers/crowns, in 3 different colours. This has been retained in the new watch, but differently placed. As the original model came with the Chrono-Matic, the chronograph pushers were on the left side and the crown on the right side. The modern Chrono-Matic 50 Auto Chrono is equipped with an equally modern chronograph movement, meaning that crown and pushers are on the right side. On the left, we find a second crown (for the countdown bezel) and a pusher for the quick date. While the positions are different, the colours are the same (silver, red, black). 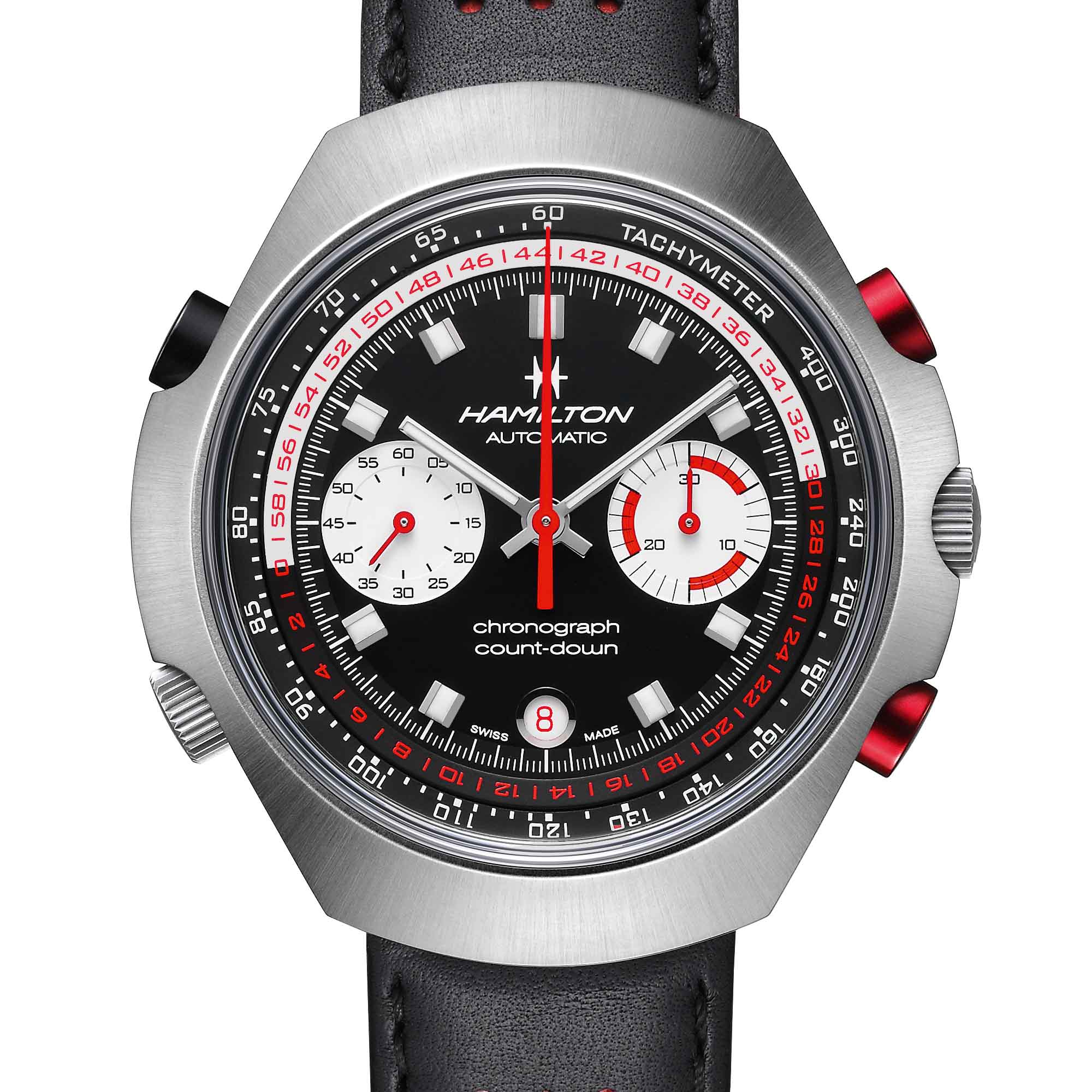 The same idea applies to the dial of the Hamilton Chrono-Matic 50 Auto Chrono: visually faithful, with slight evolutions too. The watch retains a reversed-panda style with multiple red accents and large applied hour markers. The dial is complex and displays a lot of information: two sub-dials display the small seconds and the 30-minute counters. The date is shown at 6 o’clock in a round window with a polished bevel (as the original). Then there are the peripheral tracks. Here, we find most of the differences, with a rotating countdown bezel (actuated by the crown) and a tachymeter scale – instead of 24h and city rings.

All of these differences can be explained by the presence of a modern movement, the calibre H-31, which doesn’t feature a GMT complication and has its pushers and crown on the same side – being based on the Valjoux 7753 architecture. It shows multiple improvements on the Valjoux though, including an extended power reserve of 60 hours. 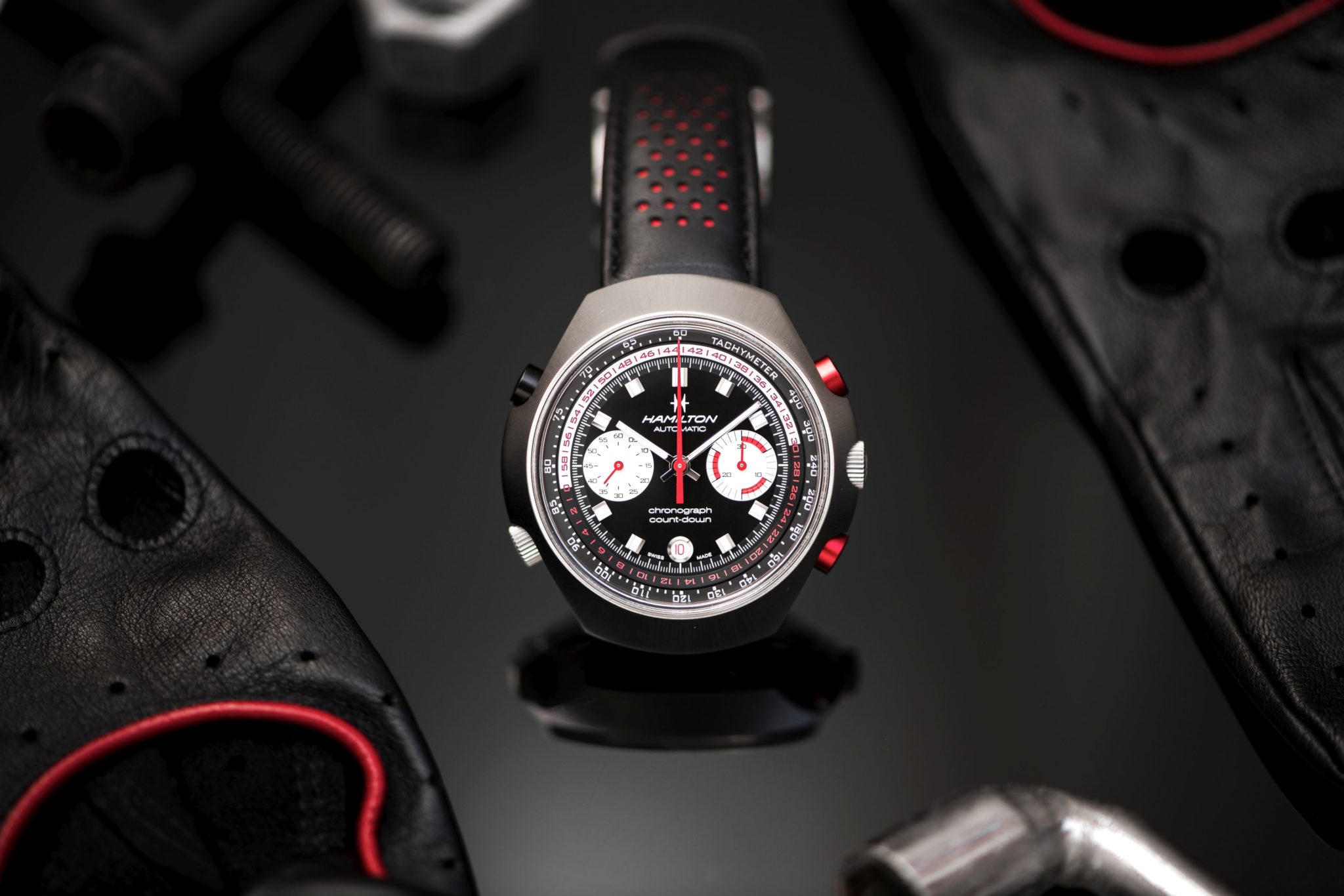