The successful Flyback Chronograph Manufacture family introduces new panda-style dials for a sportier look. This third iteration of the Flyback Chronograph is comprised of a steel model with a blue dial and a rose gold-plated model with a chocolate dial. Although we have seen these dial colours and case materials before, the novelty here is the incorporation of contrasting sub-dials. The increase in legibility afforded by the two-tone dials is undeniable. Luckily, this has not translated into an increase in price, confirming once again that Frederique Constant’s mission of “affordable luxury” is not just hype.

The Flyback Chronograph Manufacture, launched during Baselworld 2017, marked a milestone for Frederique Constant following hot on the heels of the surprising 2016 Perpetual Calendar. Probably one of the most complex developments for any watchmaker to design and develop, FC’s flyback chronograph was six years in the making and represented a huge step forward in the brand’s repertoire and manufacturing capabilities. Far more complex than a traditional chronograph and usually the territory of high-end watches, the flyback chronograph can start, stop and be reset to zero with a single press of the pusher. 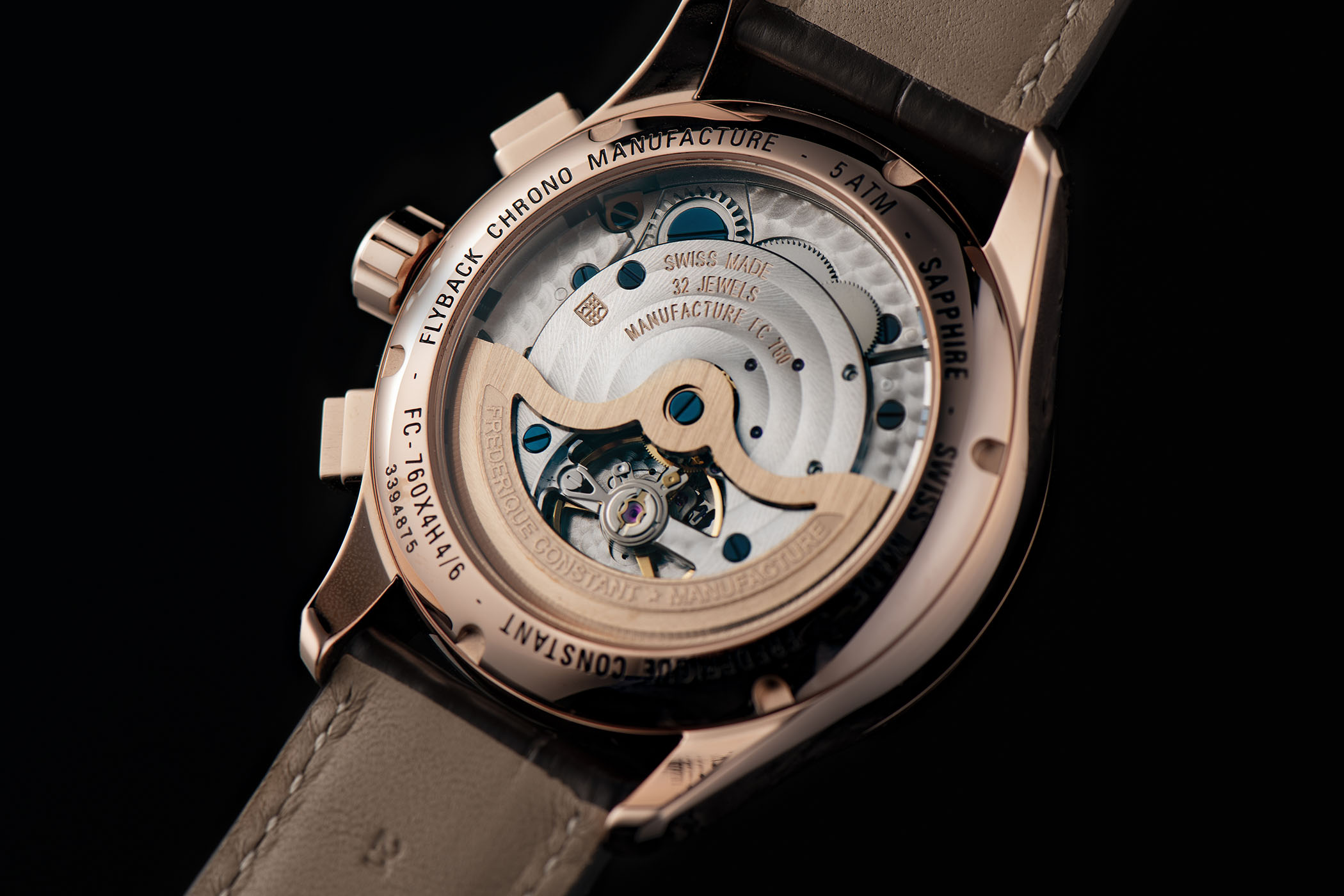 The Calibre FC-760 is a modular architecture, based on the brand’s classical 3-hand movement with additional flyback chronograph module, located dial-side. Not the most visually appealing solution, but one that allows having great mechanics at a controlled price

Most flyback mechanisms rely on several column wheels that act like clutches. The movement designed by Frederique Constant – calibre FC-760 – replaces the column wheel with a star-shaped wheel allowing for a thinner movement with fewer parts. Entirely developed and assembled in-house, the brand’s philosophy of “affordable luxury” was respected by using a base movement and developing a flyback Chronograph module. The flyback module accounts for just 96 of the entire movement’s 233 parts, making it one of the most efficient flyback modules today. To get an insider’s view of the development behind this chronograph, you can read Brice’s extensive coverage of the 2017 launch, including a video interview with Pim Koeslag, head of watchmaking at Frederique Constant.

As we mentioned, this is the third iteration of the Frederique Constant Flyback Chronograph Manufacture, and dare I say, the most successful so far. In 2017, FC launched two versions of its flyback chronograph: one model was classic with Roman numerals, Breguet-style hands and a clous de Paris pattern stamped in the centre, the other was more contemporary with applied indices, lume and a tachymeter scale. 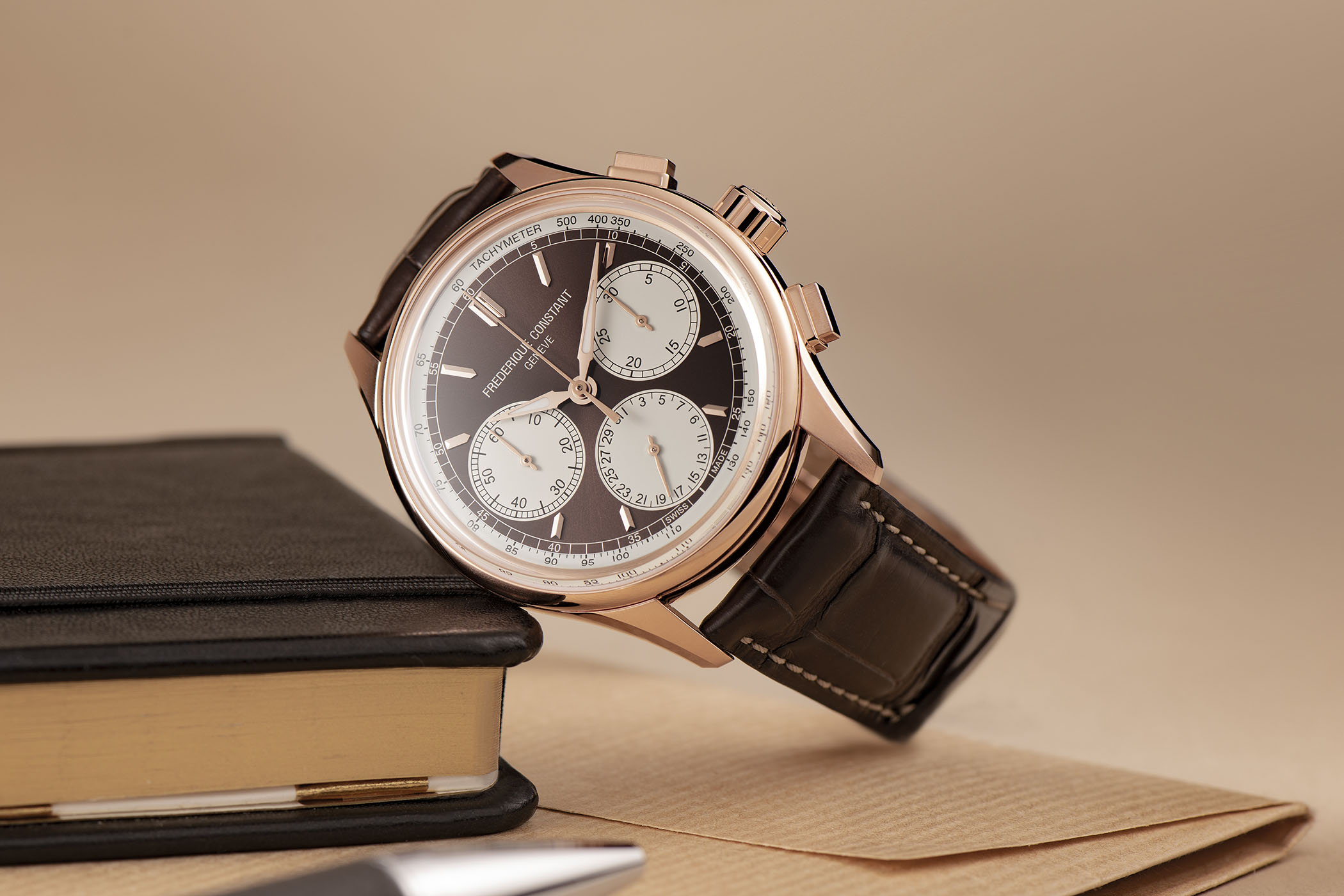 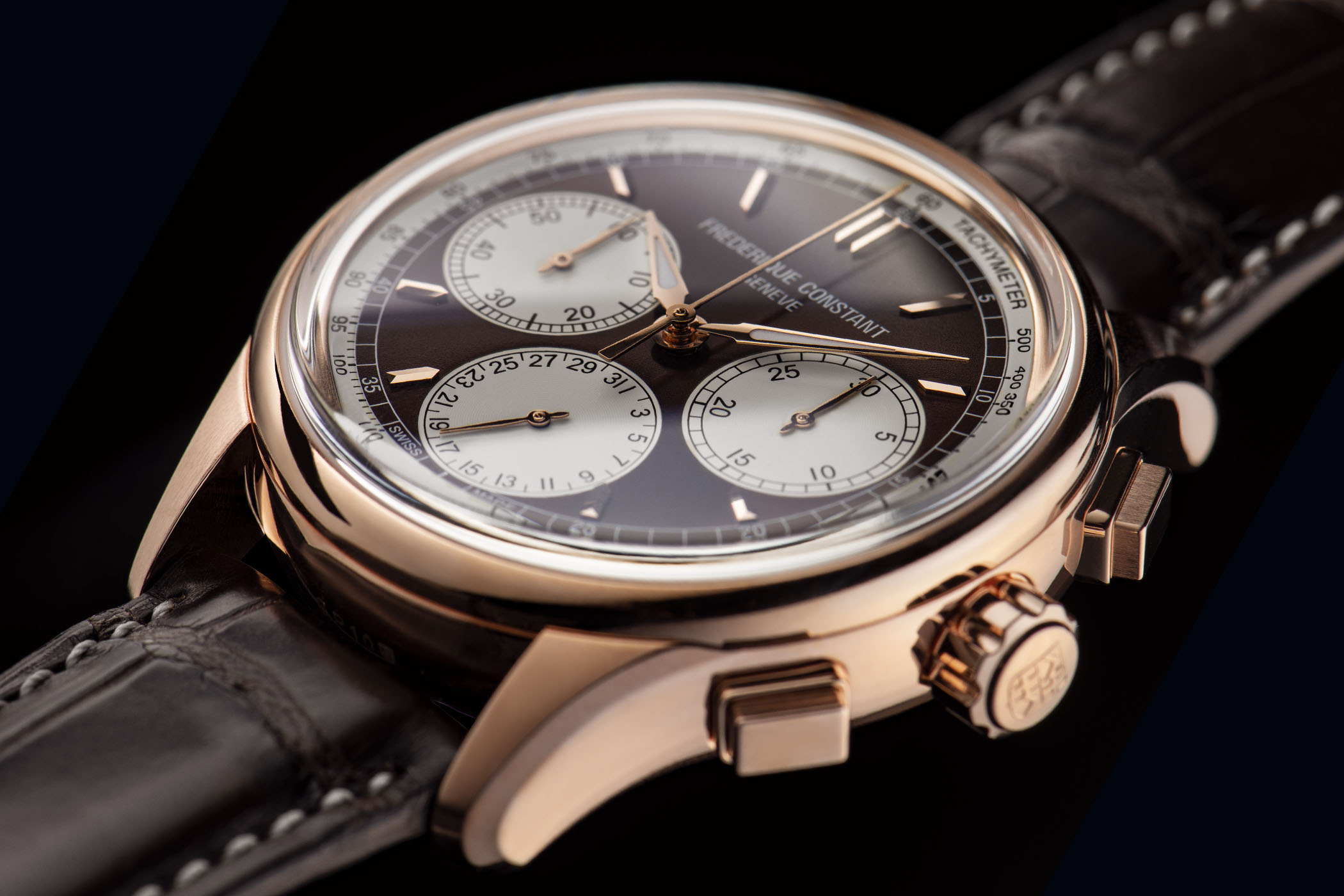 This year’s novelties adopt the styling of the more contemporary model but inject the watch with an even sportier character thanks to the panda-style or two-tone dial. The silvered tri-compax counters at 3 o’clock (30-min chrono counter), 6 o’clock (date display by hand) and 9 o’clock (running seconds), along with the silvered tachymeter scale on the stainless steel model with a navy blue background, really stand out and improve legibility no end. 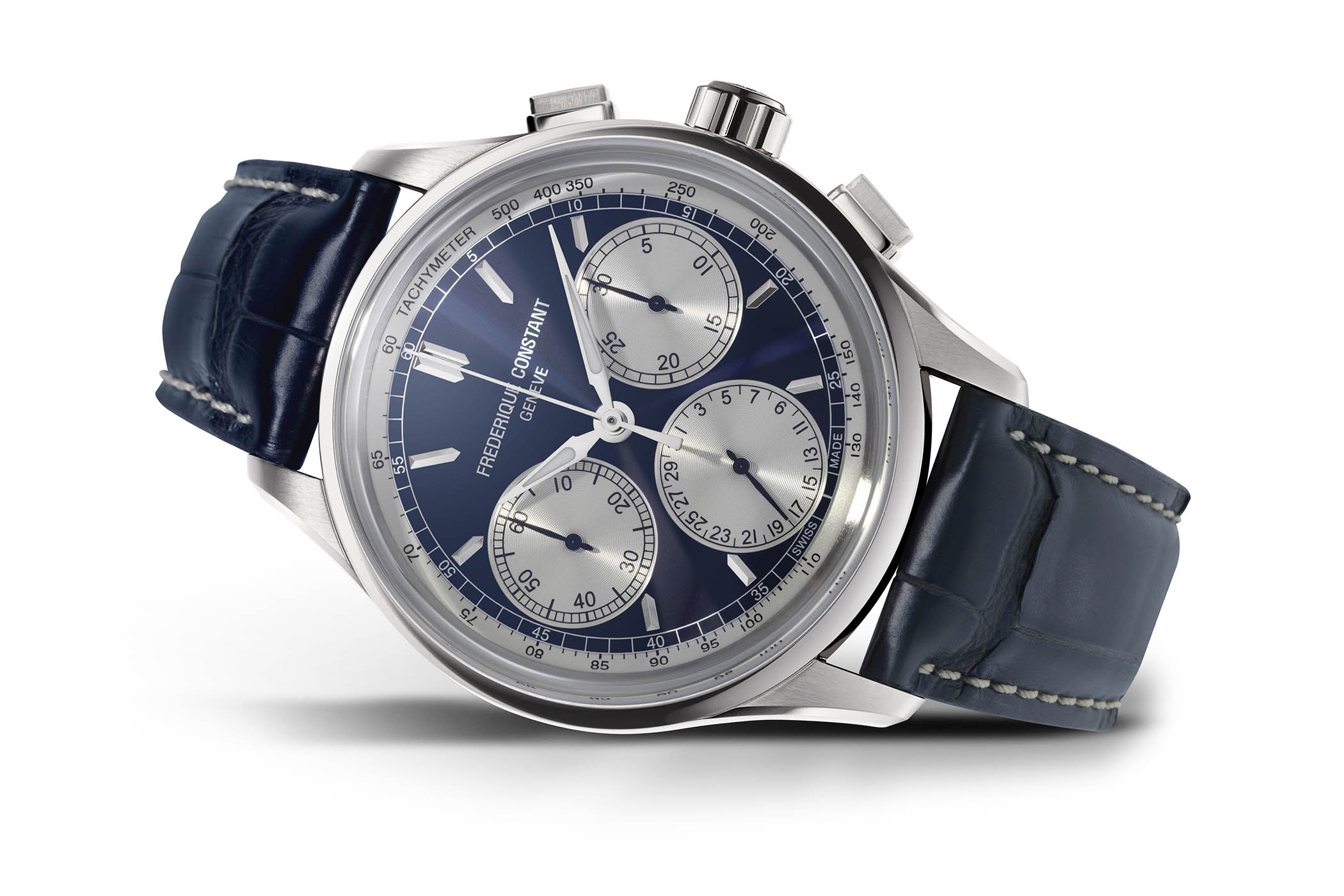 The same contrast is applied to the rose gold-plated model with its brown dial and creamy coloured sub-dials and peripheral tachymeter scale, a classic feature of sporty chronographs used to calculate speed based on travel time or distance based on speed. Naturally, the hour and minute hands are still treated with lume and the faceted, baton-style indices are applied. The indices and hands match the case material and the alligator leather strap matches the colour of the dial, blue alligator for the navy blue dial and brown alligator for the chocolate dial.

The 42mm case, available in either stainless steel or rose gold-plated steel, has a mix of brushed and polished surfaces with an elegant polished bevelled edge along the lugs. Judging by the press pictures, it also looks like the chronograph pushers now feature a brushed finish. A sapphire caseback reveals the automatic modular in-house movement. A simplified movement, with fewer parts than most flyback movements, calibre FC-760 beats at 28,800vph with 38 hours of power reserves and displays pleasing finishes with Geneva stripes on the bridge and openworked rotor and perlage on the base plate.

Released in 2019, Seiko’s LX Line is an entirely new collection of watches that are representing the best of Prospex in terms of quality...