The DS Concept put Certina on the map and was a big step forward in making Swiss watches more reliable and water-resistant while maintaining affordable prices. Now that the system is celebrating its 60th birthday, a commemorative watch is launched. Meet the new Certina DS1 Big Date 60th Anniversary and its combination of style, good mechanics and affordability. 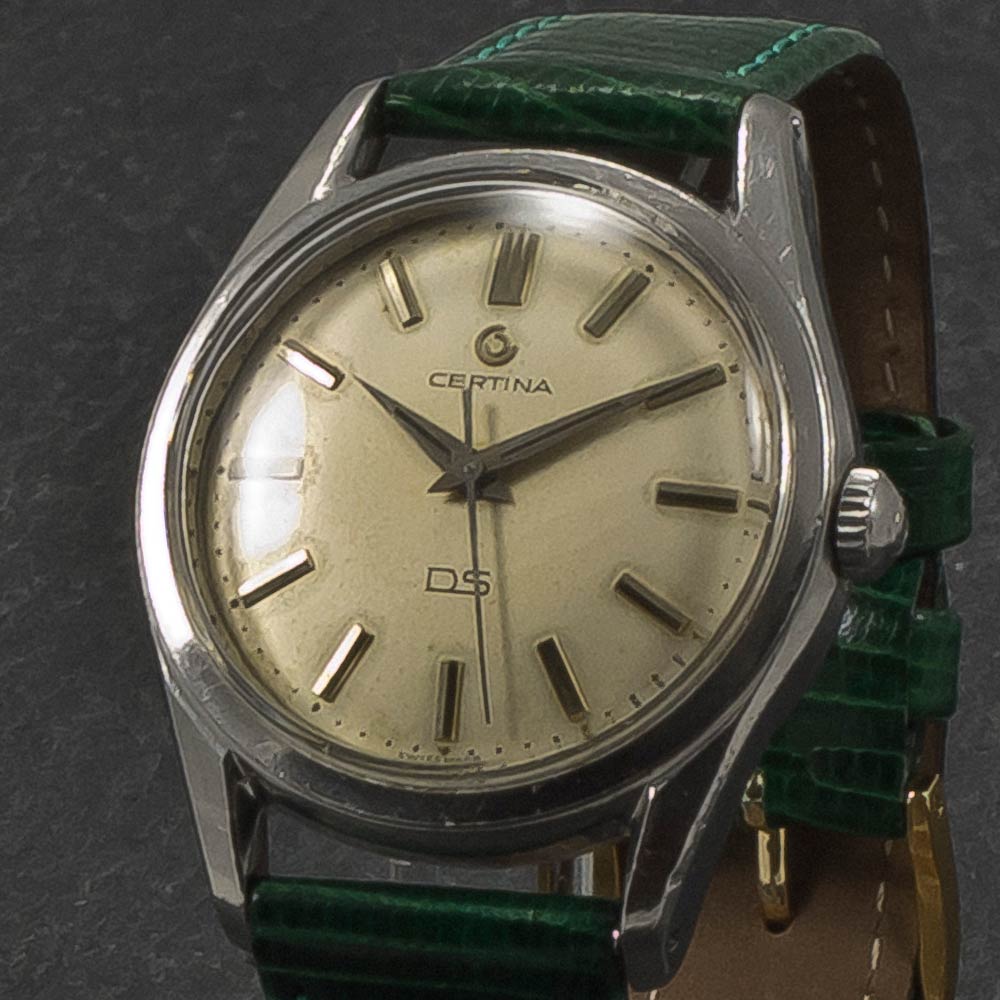 But things were very different sixty years ago, when Incabloc was practically the only good shock absorber on the market, and still relatively scarce. Water-resistance was an even bigger issue. So when Certina introduced its DS (Double Security) system in 1959, the company honoured its name that was derived from the Latin word Certus, meaning ‘certain’. It put Certina on the wrist of watch wearing adventurers and cemented the company’s reputation for dive watches.

This Double Security Concept has been updated many times since, but the essence has always stayed the same. It actually has the same values as those of an ETA 2428 movement: intelligent in its simplicity and very reliable at the same time. It consists of five basic aspects: a sapphire crystal, an O-ring on the setting stem, two O-ring seals on the crown, a special seal in the caseback and a reinforced caseback. The simplicity of the concept makes sure the watches are affordable, and the robustness makes sure the movements in Certina watches have been safe since 1959. And that’s quite an achievement, although this brand is a little too understated to shout that out loud. Certina has never been a brand to make a lot of noise.

Instead, Certina celebrates the birthday of the DS Concept in a typically understated style. The Certina DS-1 Big Date 60th Anniversary piece is truly affordable: EUR 765. And that’s a great price for a stylish, solid and reliable watch. Because besides being robust and relatively cheap, this watch actually looks good as well. 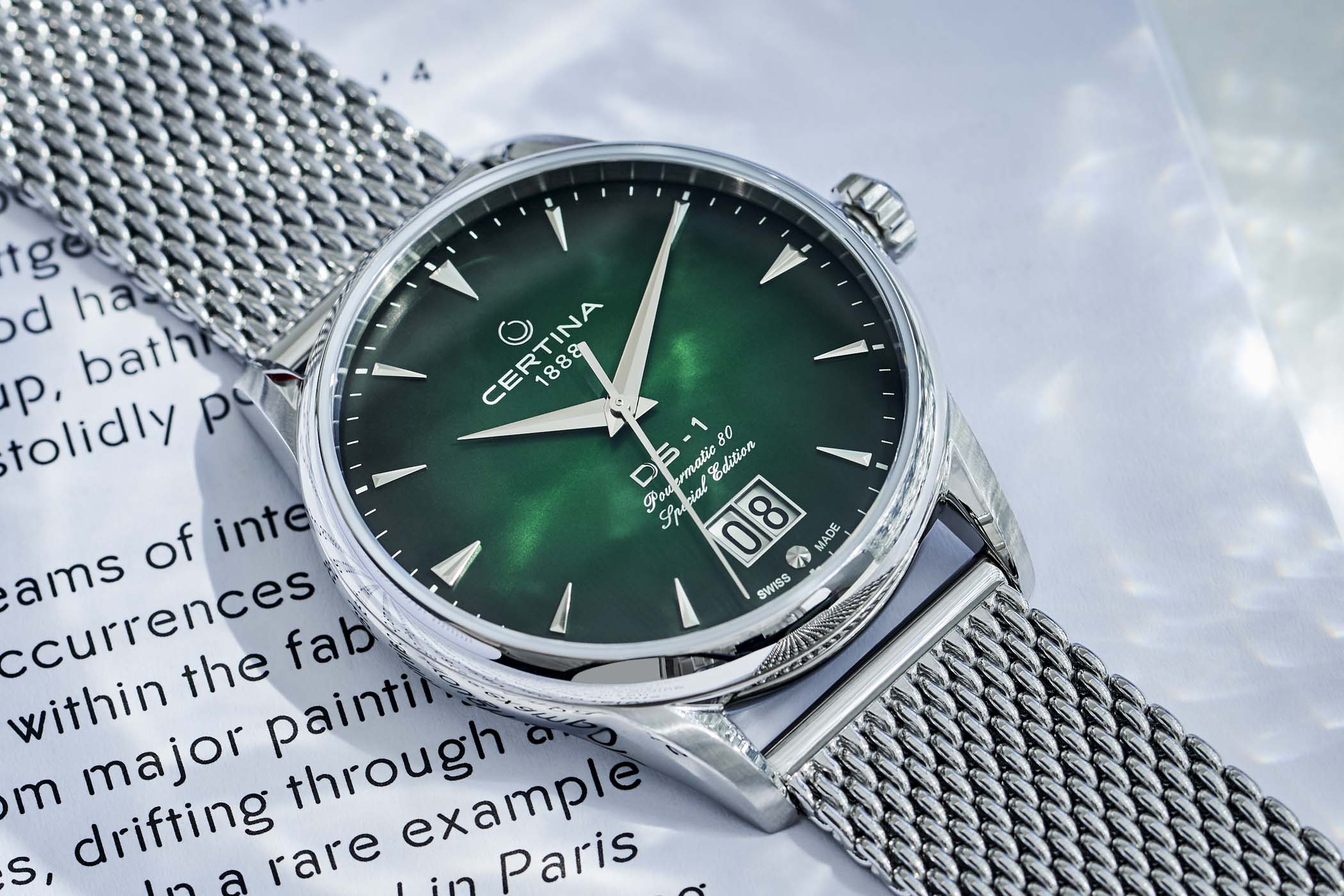 The company from Grenchen really shows that entry-level watches can make an impression. The dégradé dial was given a nice Certina-green colour and a sunburst finish that adds depth and a dynamic appearance. The party piece also comes equipped with a steel Milanese strap, which, as we all know, is the choice for the man who dares to go for a bit more flash. The steel case measures 41mm in diameter and is water-resistant to 100m/10 bar.

The engine of this watch is the Powermatic movement, the modern Swatch Group workhorse with a power reserve up to 80 hours. This movement is manufactured for different Swatch Group brands by ETA and can be seen as a thoroughly developed version of the ETA 2824 ébauche. There are different Powermatic calibres, some of them chronometer certified. This one isn’t, but mainly because Certina intentionally wanted to keep the price as low as possible. Sending it to COSC would mainly add a premium to the price, not necessarily more precision. The calibre used in this DS1 is the Powermatic 80.651, which hasn’t been used before. 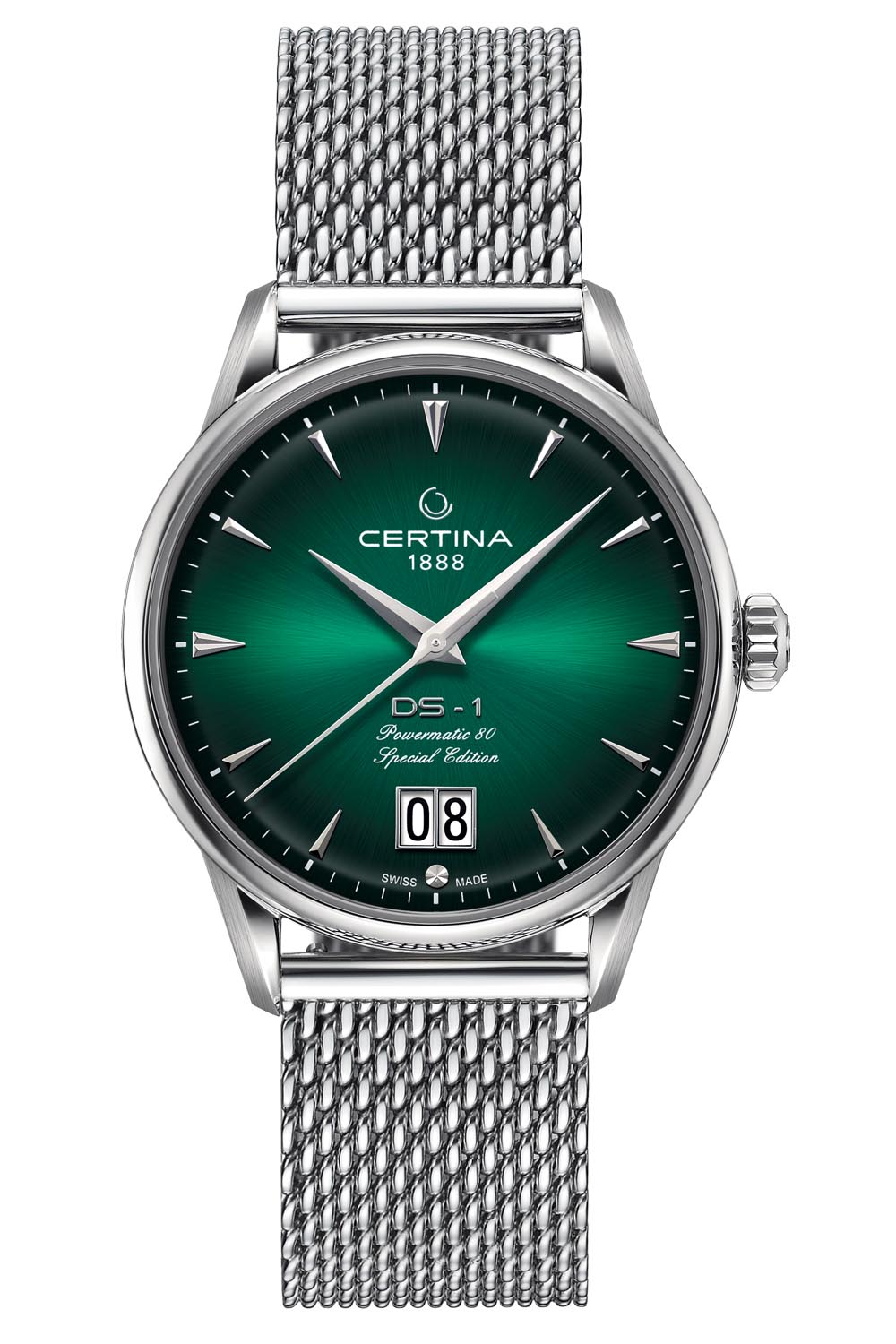 For this special celebration, the movement is equipped with a big date at 6 o’clock. But more importantly, it has a new, ultra-modern heart. For the first time, this calibre is fitted with a new type of balance spring made from Nivachron. This innovative material was developed by the Swatch Group and Audemars Piguet together and was first used in the Swatch Flymagic, introduced earlier this year. The main objective of Nivachron is to improve resistance to magnetic fields resulting in better precision. Additionally, because this material is based on titanium, the Swiss Made balance spring is also highly resistant to fluctuations in temperature and shows good shock resistance. Of course, the watch has all the other features from the DS concept as well.

In all, Certina celebrates the anniversary of its signature concept in an understated, but very thoughtful way. And that’s very fitting for a brand that has been in constant operation since its foundation in 1888. Certina has never been the most aggressive or the most outspoken watch brand; it has always chosen the path of evolution, not revolution, pitching its products at reasonable prices. This new piece displays that character in a beautifully understated way. The DS1 60th Anniversary edition is the perfect piece that makes people fall in love with watches – and aspire to a collection in 60 years’ time.

The Certina DS1 Big Date 60th Anniversary will be priced at EUR 765. More details at www.certina.com.