Breguet is one of the finest manufactures of the Swiss watch industry and, as the direct descendant of the inventor of the tourbillon regulator, the brand has been exploring this complex mechanism in various models – such as the extra-thin 5367 or the highly complicated 3797. However, if there’s one watch that best demonstrates the brand’s mechanical virtuosity, it is its signature double tourbillon watch, which sets the whole plate in motion through a central differential to indicate the hours. Today, Breguet introduces a new version of this watch, a bold and mechanically fascinating statement showcasing impressive watchmaking and decoration skills. Meet the new Classique Double Tourbillon 5345 “Quai de l’Horloge”.

The tourbillon is a complex device invented and patented by Abraham-Louis Breguet on June 26, 1801, or rather on 7 Messidor, year IX (according to the French revolutionary calendar). This device, consisting of a placing the regulating organ (balance, hairspring, lever and escape-wheel) in a rotating cage making a complete revolution on itself (usually once per minute), was created to solve the issue of gravity and its effects on the regularity of horological movements, in that it provokes variations in timing adjustment with each change of position of a watch when worn. Thanks to this mobile carriage, since all the flaws resulting from gravity are regularly repeated, they are engaged in a process of mutual compensation.

As the brand that bears the name of the inventor of the tourbillon, Breguet has been relying on this complication in numerous models, from “simple” tourbillon models to some more complex watches with additional complications. Still, this specific regulating organ remains a signature feature of higher-end Breguet watches. Introduced in 2005, the Double Tourbillon – under the reference 5347 – is the pinnacle of the tourbillon watches at Breguet. It features not one but two regulating organs, connected together by a differential, where the main-plate of the movement acts as a rotating dial to indicate the hours. And this combination of elements – the tourbillons and the differential – is there to average flaws due to two factors, position and rate erros… but more on that later. Let’s now have a look at the latest edition of the Breguet Classique Double Tourbillon, a bold, very demonstrative skeletonzied model named “Quai de l’Horloge” 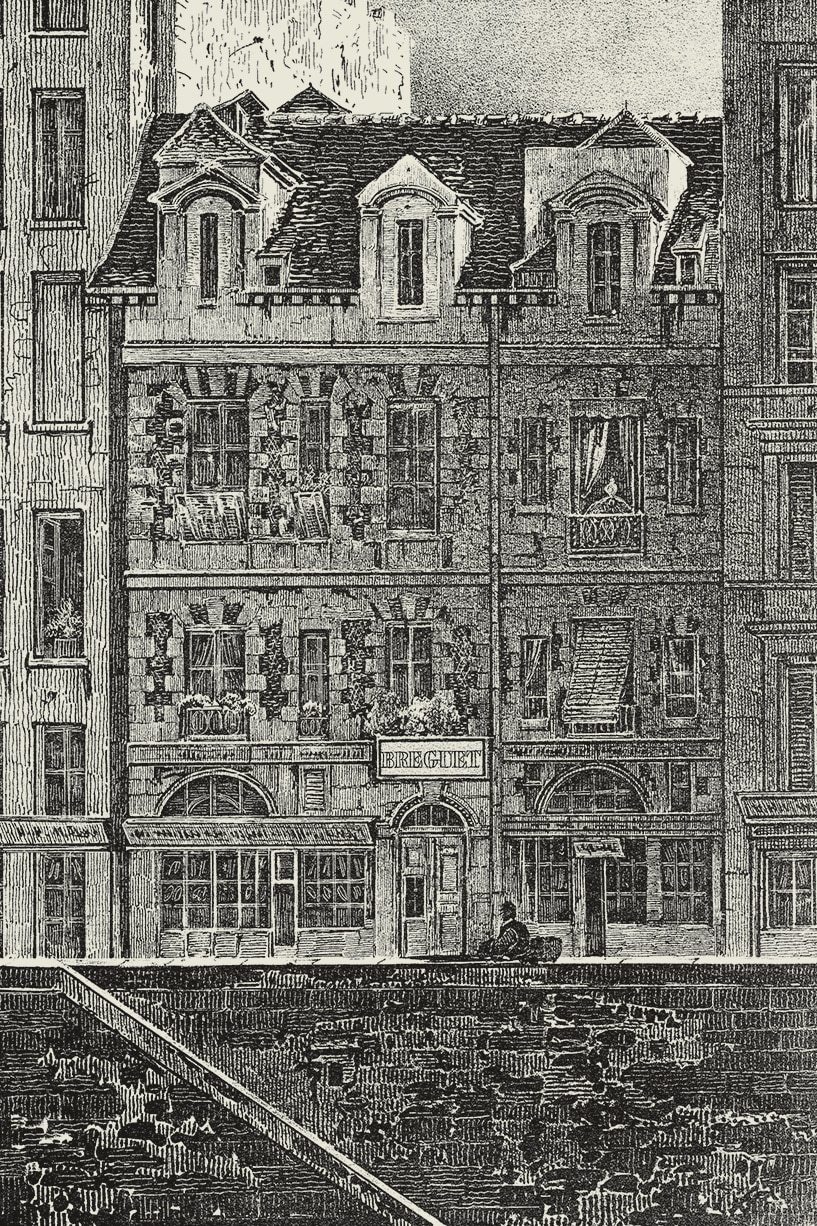 The name is a tribute to the original location of A.L. Breguet’s workshop. In 1775, the young watchmaker settled at Ile de la Cité in Paris. The district was then a centre of craftsmanship, bustling with dial-makers, goldsmiths, and manufacturers of hands and cases plying their trades. It is there that he invented some of his most important achievements: gong springs for repeating watches in 1783; the pare- chute shock protector in 1790; the Breguet balance spring in 1795; and above all the tourbillon, patented in 1801. It was here in the “House on the Quai” that Abraham-Louis Breguet introduced guilloché work to watchmaking for the first time in 1786.

This new edition of the Classique Double Tourbillon is a visual update which retains most technical attributes from its predecessors with a closed dial. The base movement is identical, so are the functions, however, the execution is drastically different. 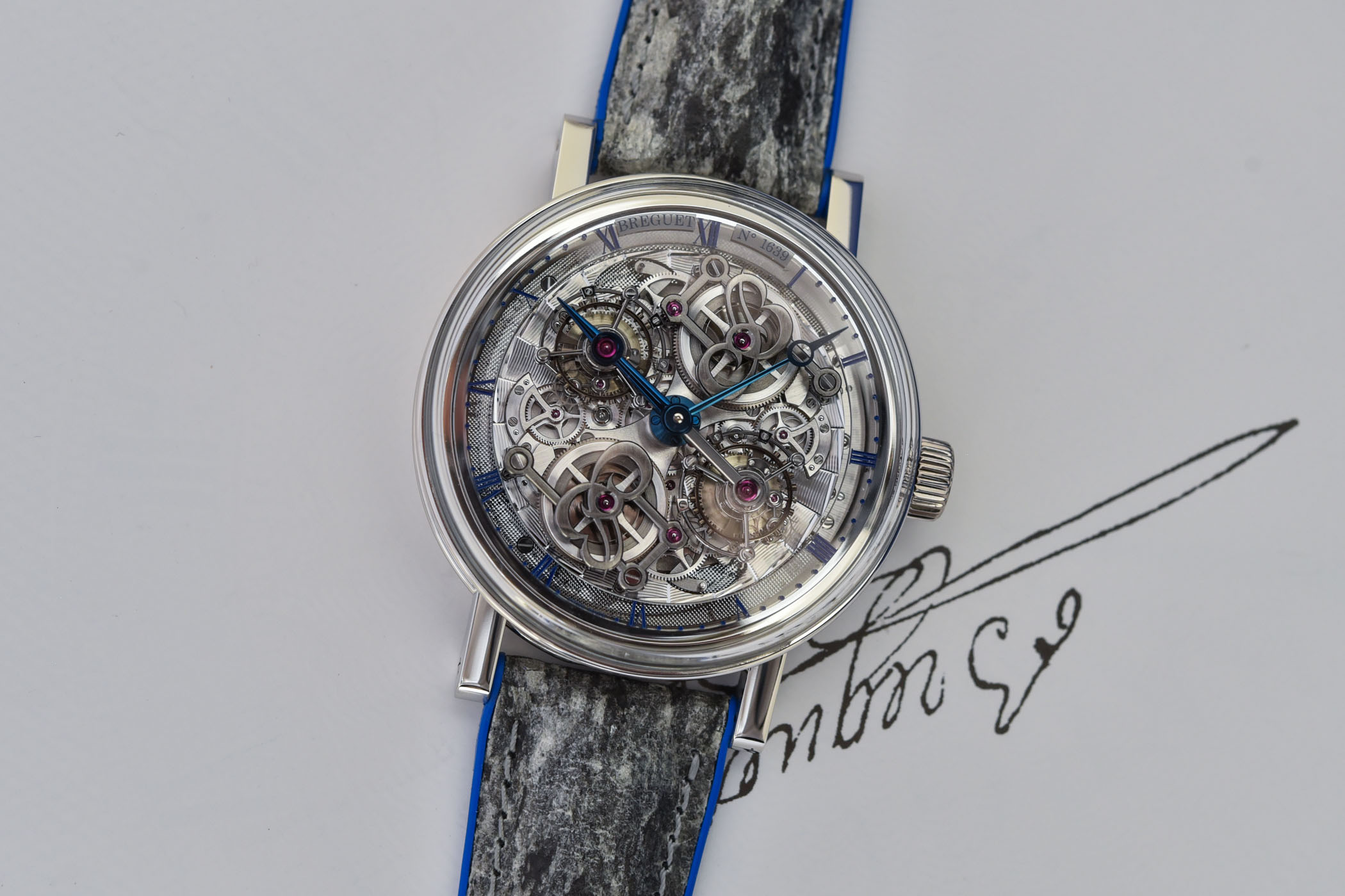 Before we go into more technical details, let’s first focus on the looks. Certainly, this watch is a statement piece, something demonstrative, opulent and far from the restrained elegance of a Classique 7337 Calendar & Moon, for instance. Here, Breguet showcases its technical and finissage expertise – and indeed, the Double Tourbillon 5345 is an impressive piece.

The case retains the same dimensions as previous editions, meaning a 46mm diameter for a height of 16.8mm. Made of platinum, it is classically shaped, with a finely fluted caseband, polished surfaces and welded lugs with screw bars. To visually lighten the watch, it is topped by a box-shaped sapphire crystal which encapsulates the upper part of the movement, allowing for an uncluttered view on the mobile parts. There’s no denying the visual impact of this watch and its size on the wrist. It is large, heavy and demonstrative. But this is not the point… See it as Breguet’s vision of a concept piece, a flagship watch that encompasses most of the brand’s savoir-faire. 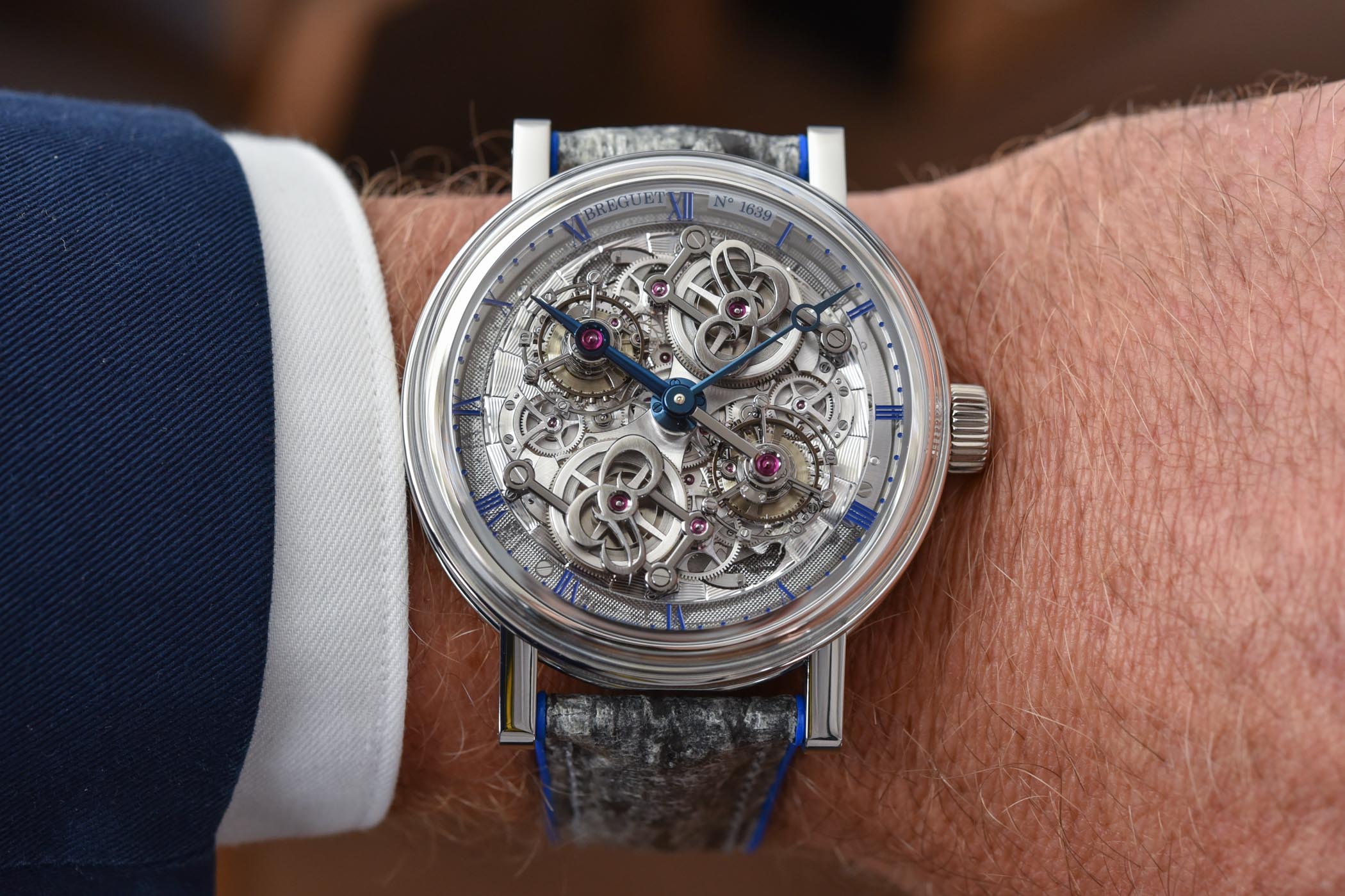 For this openworked edition, Breguet opted for a rather unusual strap. The base is made of rubber (available in blue, black, red or orange) and on top is a thin, flexible layer or genuine slate stone, giving a mineral look to the strap, resulting in a heterogeneous surface. It is secured by a triple folding clasp shaped in the brand’s B logo. In all fairness, I don’t really like this strap and would personally opt for something more classic, such as a black or blue alligator – which is also offered by Breguet. So let’s focus on the watch instead. 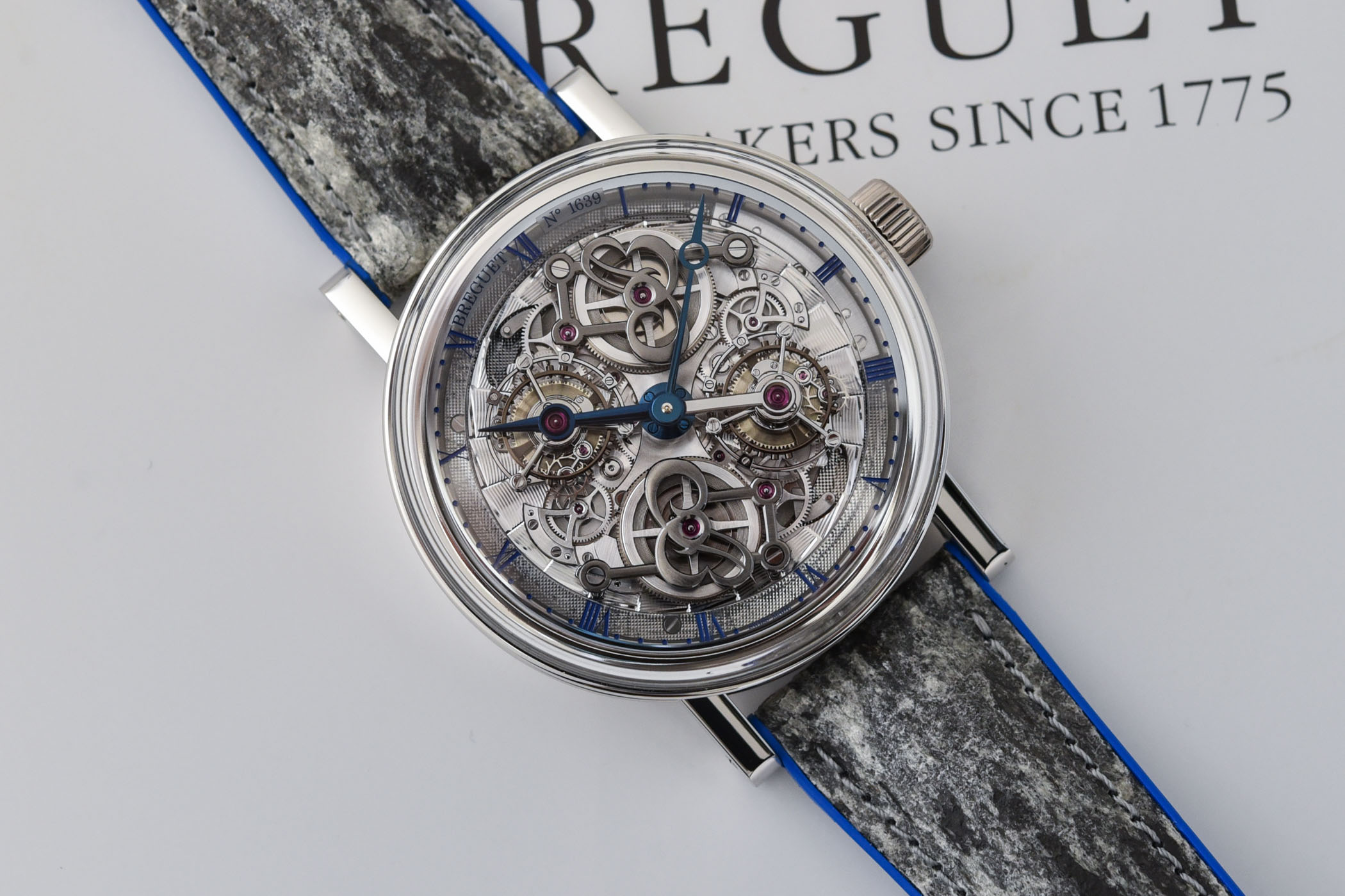 While all previous editions of the Breguet Classique Double Tourbillon featured a closed, often guilloché main plate covering most of the movement – only two apertures were executed in the plate to reveal the tourbillon regulators – this new “Quai de l’Horloge” simply reveals every single technical element of its upper movement. The dial (which was a proper mechanical element) has been replaced by several openwork bridges, holding the mobile parts in place.

The dial is surrounded by an internal flange in sapphire, on which Roman numerals have been printed in blue, to indicated hours and minutes. The Roman numerals are also repeated inside the case, engraved on the inner flange to create a reflection effect. The base plate and the bridge on the lower part of the dial are executed in white gold, then hand-guilloche with a Clou de Paris or a fan pattern. New to this model, the barrel bridges in steel take on the form of the letter B. These are decorated by hand with anglage, straight graining and an anthracite coating to create contrast with the rest of the elements – a colour also found on the balances, which aren’t gold-coloured anymore. 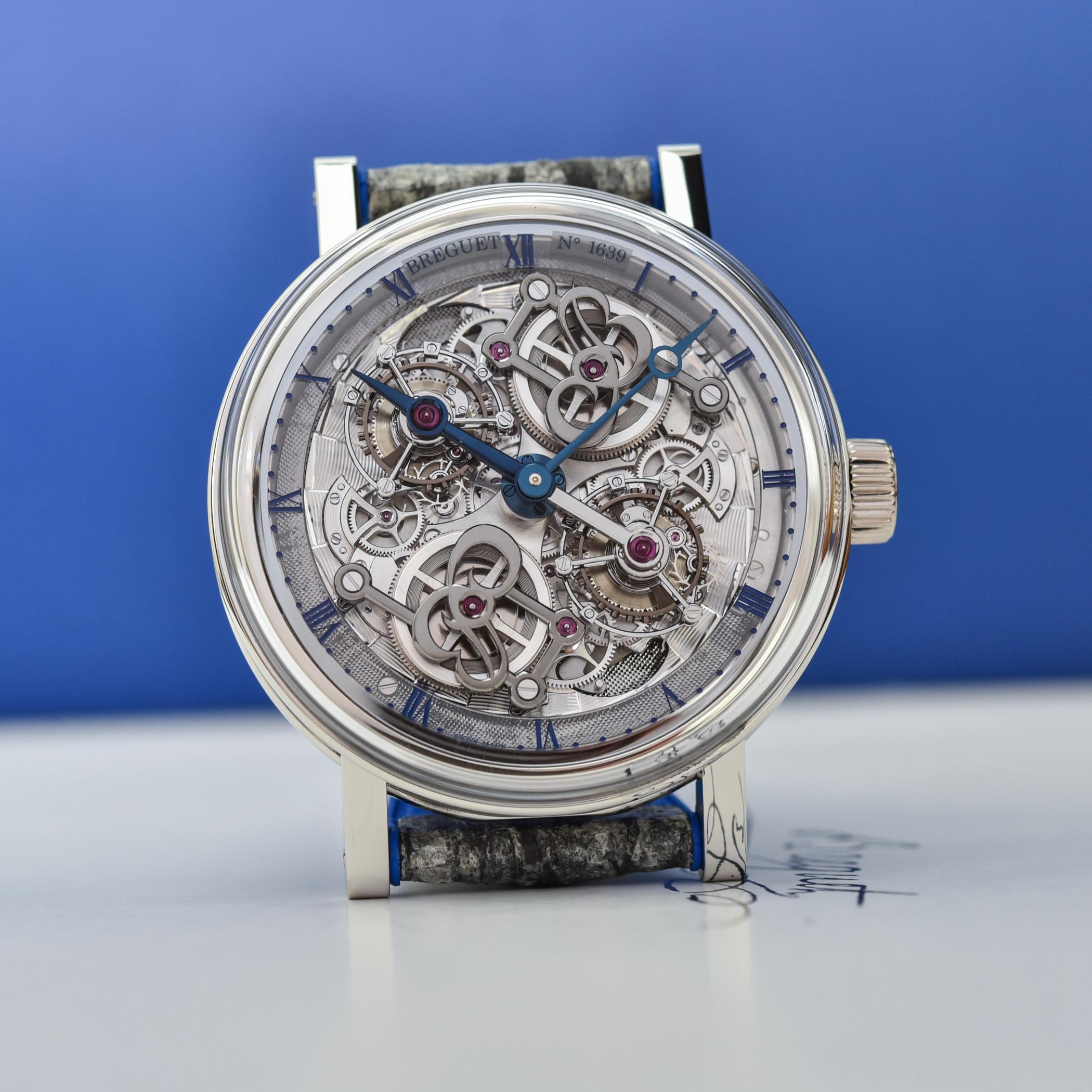 As expected, all the parts are finely finished by hand, with an impressive level of detail – hand-applied anglages, straight graining, polished slots and screws, satin-brushed parts, black polished elements… Time is displayed by the mean of typically Breguet hands, in blued steel, with eccentric “moon” tip. And while the minute hand is classic, the hour hand is far from usual, being a bridge to hold in place the two tourbillons, partially blued, and connected to the central differential… and as such, rotating once every 12 hours.

The back of the watch is equally demonstrative. Composed of 4 bridges in solid gold, the movement’s back is fully hand-engraved with the facade of A.L. Breguet’s house, 39 Quai de l’Horloge, Paris. This engraving is then coated in two different tones of grey, revealing the motif and some cuts leave the view uncluttered on gold-coloured wheels, as lights visible through the windowpanes.

The mechanics behind the Classique Double Tourbillon

So, let’s now move on to the real deal here, the heart of this watch, its calibre 588N. A hand-wound movement with no fewer than 738 components, including 81 jewels, this engine is highly complex yet quite clever when it comes to its technical solutions. You can see it in motion in the video on top of this article.

The idea is to negate two issues that can affect the good run of a watch. The first are positional errors, which are due to gravity. That’s where the tourbillon comes into the equation. The second are rate errors, and that’s where the use of not one but two regulators, connected by a differential, makes sense. 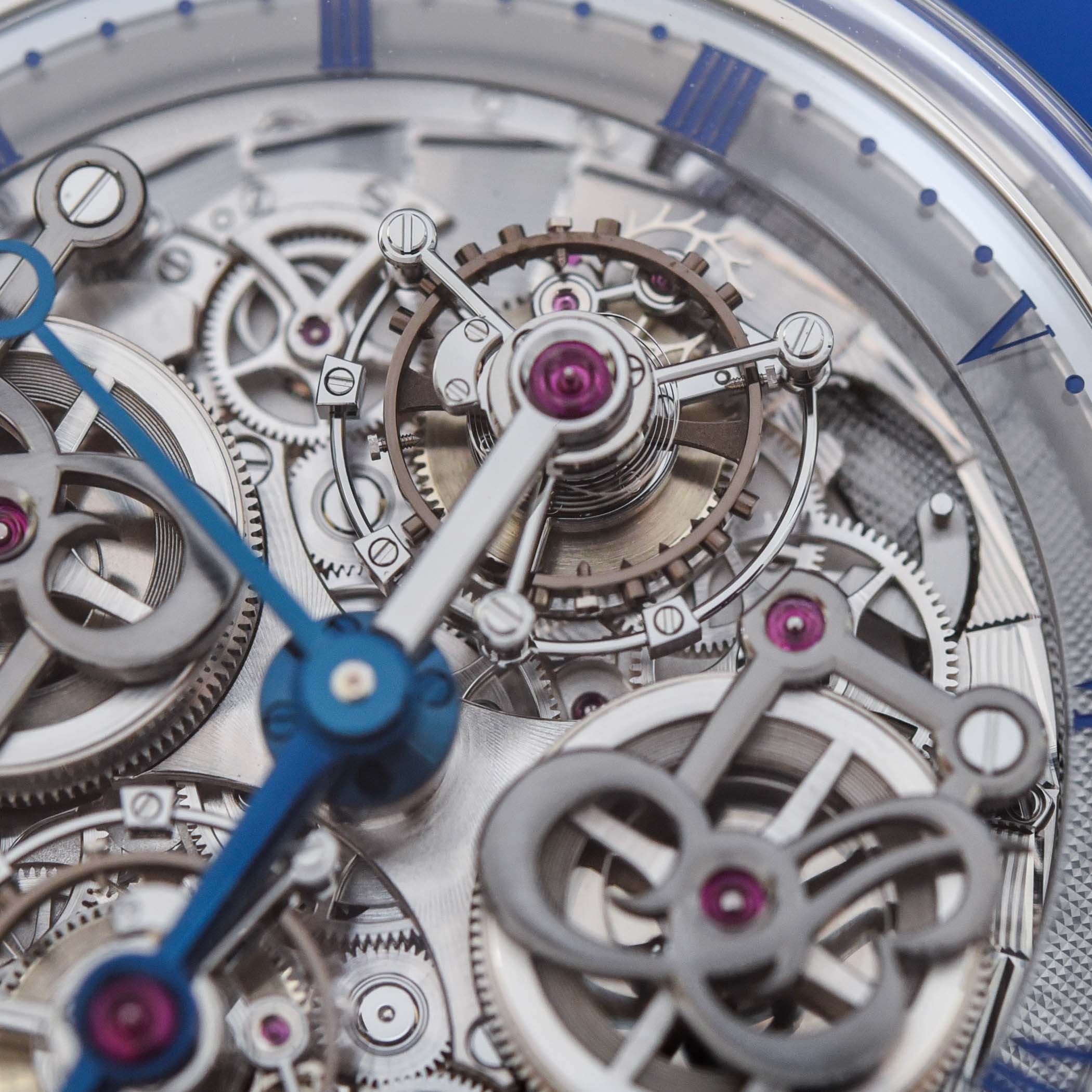 The watch relies on two independent sub-movements, each having its own independent barrel, its own gear train and its own regulating organ. The two mechanical hearts beat independently from one another. Each of them is a tourbillon, meaning that each of them will not only regulate the movement but also has the ability to negate the effects of gravity and positional errors. Being doubled, the effect is furthermore enhanced. Each tourbillon is equipped with a steel balance spring, endowed with the characteristic Breguet terminal curve, allowing for concentric development of the spring. Each tourbillon runs at a frequency of 2.5Hz (18,000 vibrations/hour) and has a monometallic balance wheel with gold screws, adjusted in 6 positions. Also, the carriages are the only ones in the current Breguet collection that feature a framework in black-polished steel. 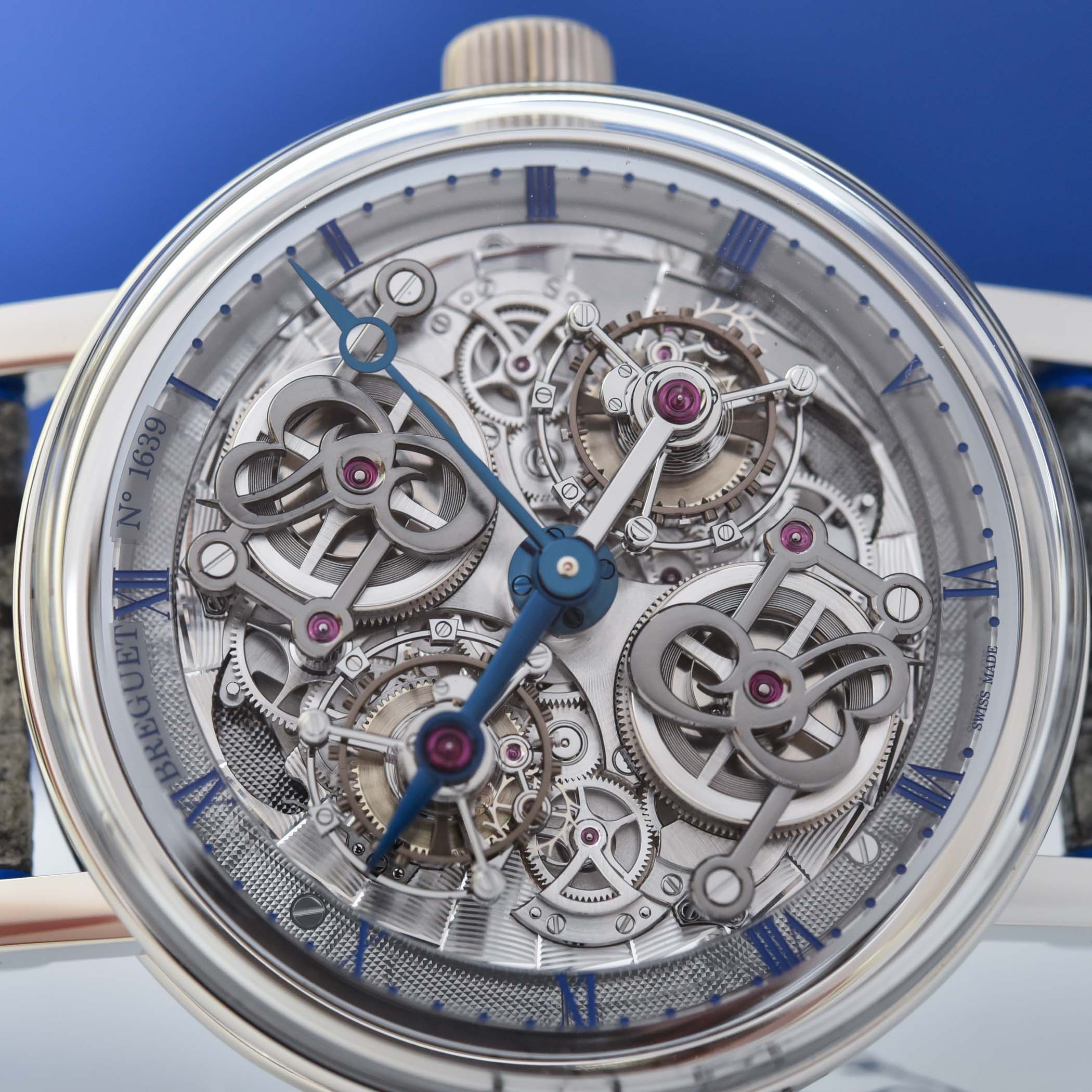 Now, once you have these two independent regulating organs, you need to connect them in order to bring a single time display. This is the role of the central differential – positioned just below the axis of the hours hand. The two oscillating organs are coupled with a second pair of wheels, revolving around the central differential. This double-entry mechanism is able to determine the average rate of the tourbillons, allowing for the oscillating plate to be set in motion at the rate of one full rotation every 12 hours – thus displaying the hours. If the tourbillons are here to average the effect of gravity, the differential is here to correct the rate errors of each regulating organ and to average them in order to provide a more precise display of the time – the errors of one compensate the errors of the other. 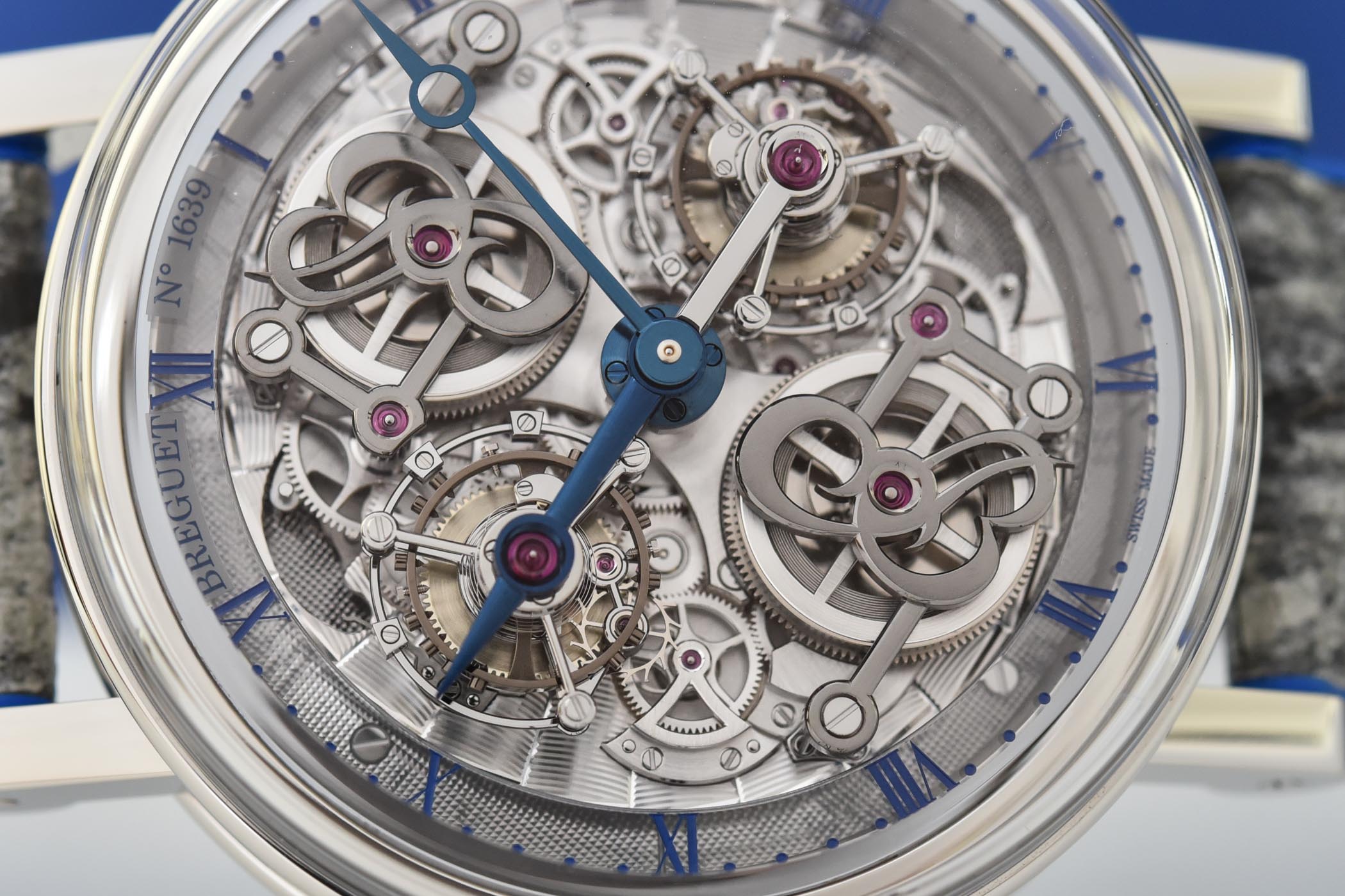 The movement itself can store up to 50 hours of energy when fully wound. One of the two barrels is equipped with a friction bridle, similar to those used on self-winding watches. This construction allows the spring to disengage once coiled, until the second barrel is fully wound. Lastly, the crown employs a dynamometric security system, which prevents excessive winding of the springs.

The Breguet Classique Double Tourbillon 5345 “Quai de l’Horloge” (ref. 5345PT/1S/7XU) is available as of now from selected boutiques and retailers. It won’t be per se a limited edition, yet due to its highly complex nature, it will be produced in very limited quantities. It is priced at CHF 628,000.