Nirupesh Joshi and Mercy Amalraj founded Bangalore Watch Company in 2018 with the goal of bringing fine watchmaking to India with a tangible link to the country. Following a collection of both men’s and women’s dress watches, the husband and wife team launched the MACH 1 pilot’s watches in September 2019. With multiple case and dial variants, and a special edition using an aluminium alloy dial from a MiG 21’s outer skin, the collection honoured India’s first supersonic jet fighter, the MiG 21 Type 77. Two new versions add a light blue dial to the mix that pays additional tribute to the Indian Air Force – the MACH 1 Officer’s Blue. 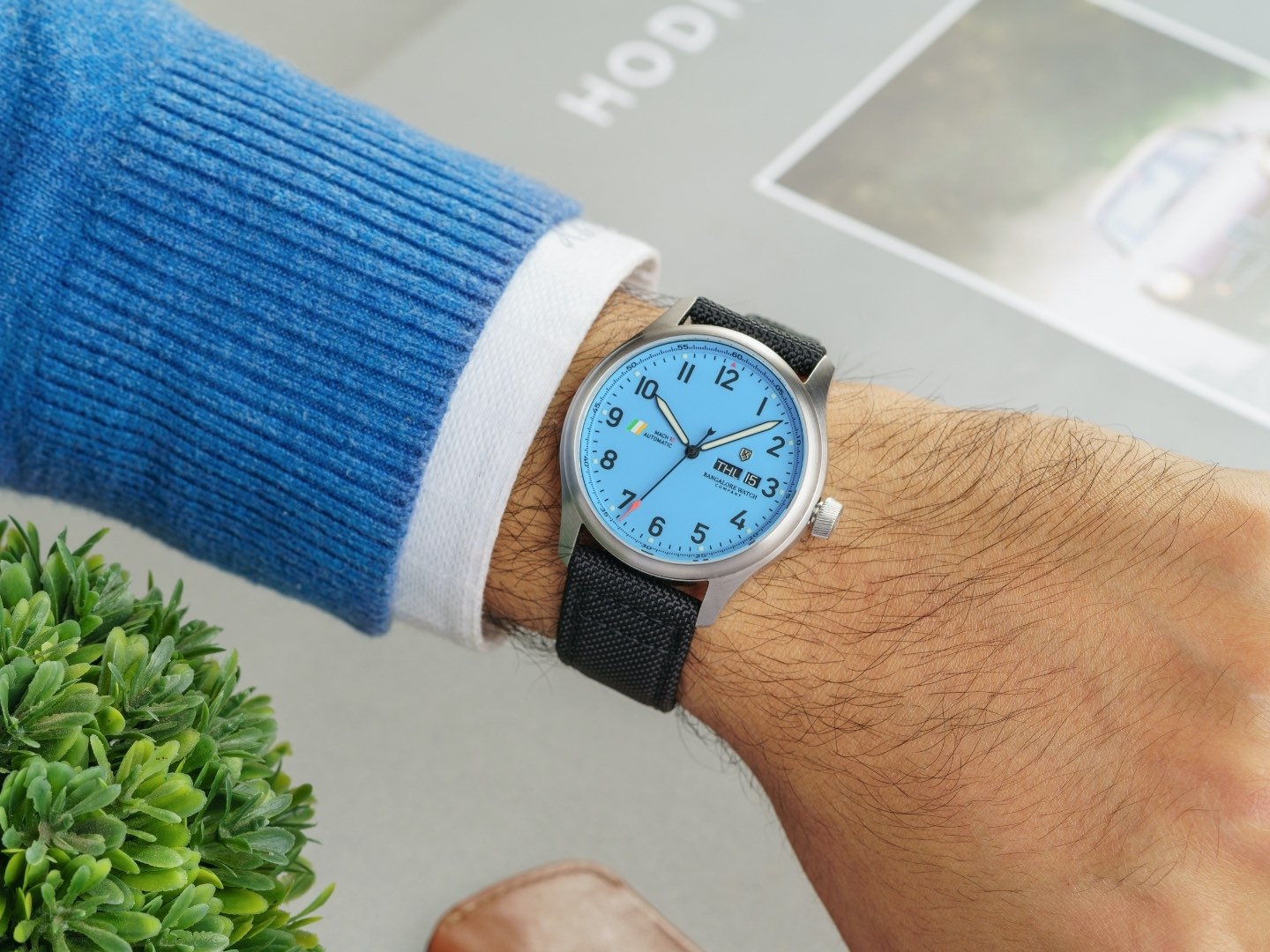 The original MACH 1 collection had design elements that directly connected to the MiG 21, such as a crown resembling an afterburner nozzle, Indian Air Force tricolour fin-flash on the dial and hands similar to those from a MiG fuselage. All dials were black save for a grey aluminium special edition, sticking to a traditional, monochromatic pilot’s watch theme. A light blue dial may seem out of place at first, but the colour has meaning. The Indian Air Force uses blue in multiple ways, including on the IAF flag and officer’s uniforms. Of course, the fresh colour is also eye-catching and adds flair to the more subdued original collection. 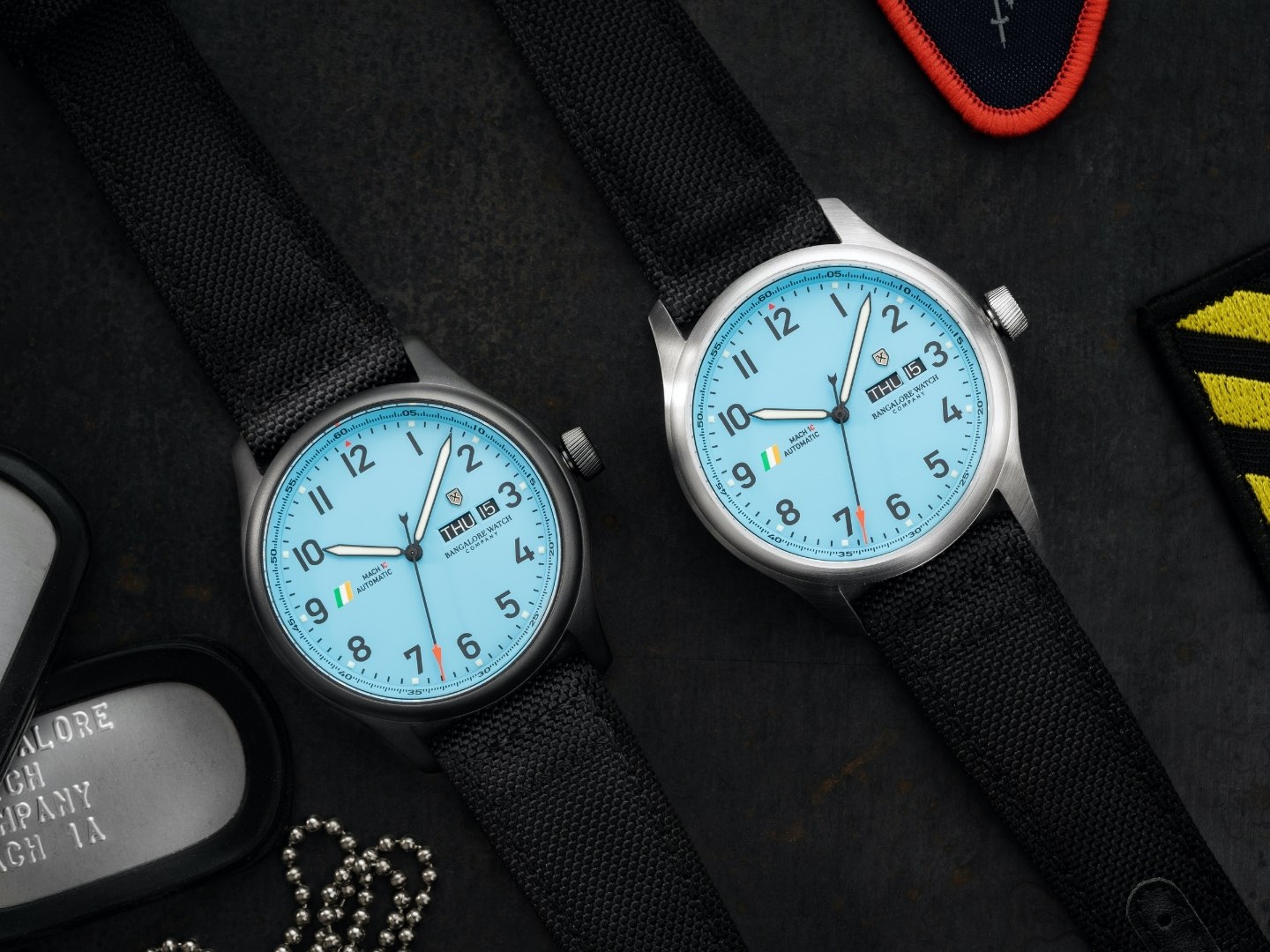 The 316L stainless steel case remains the same contemporary size at 42mm in diameter and 11mm in height (48mm lug-to-lug). There are two finishes, brushed steel or black PVD, which make up the Officer’s Blue Steel and Officer’s Blue Stealth Fighter models, respectively. The screw-down crown has a sloping shape and angled knurling that resemble an afterburner nozzle, same as before, and the sapphire crystal has three anti-reflective coatings. The solid case back features an engraving of three MiG 21’s flying in formation and water resistance is 100 metres. The 22mm black Cordura strap has a leather lining and quick-release levers and is modelled after a MiG 21 seatbelt. 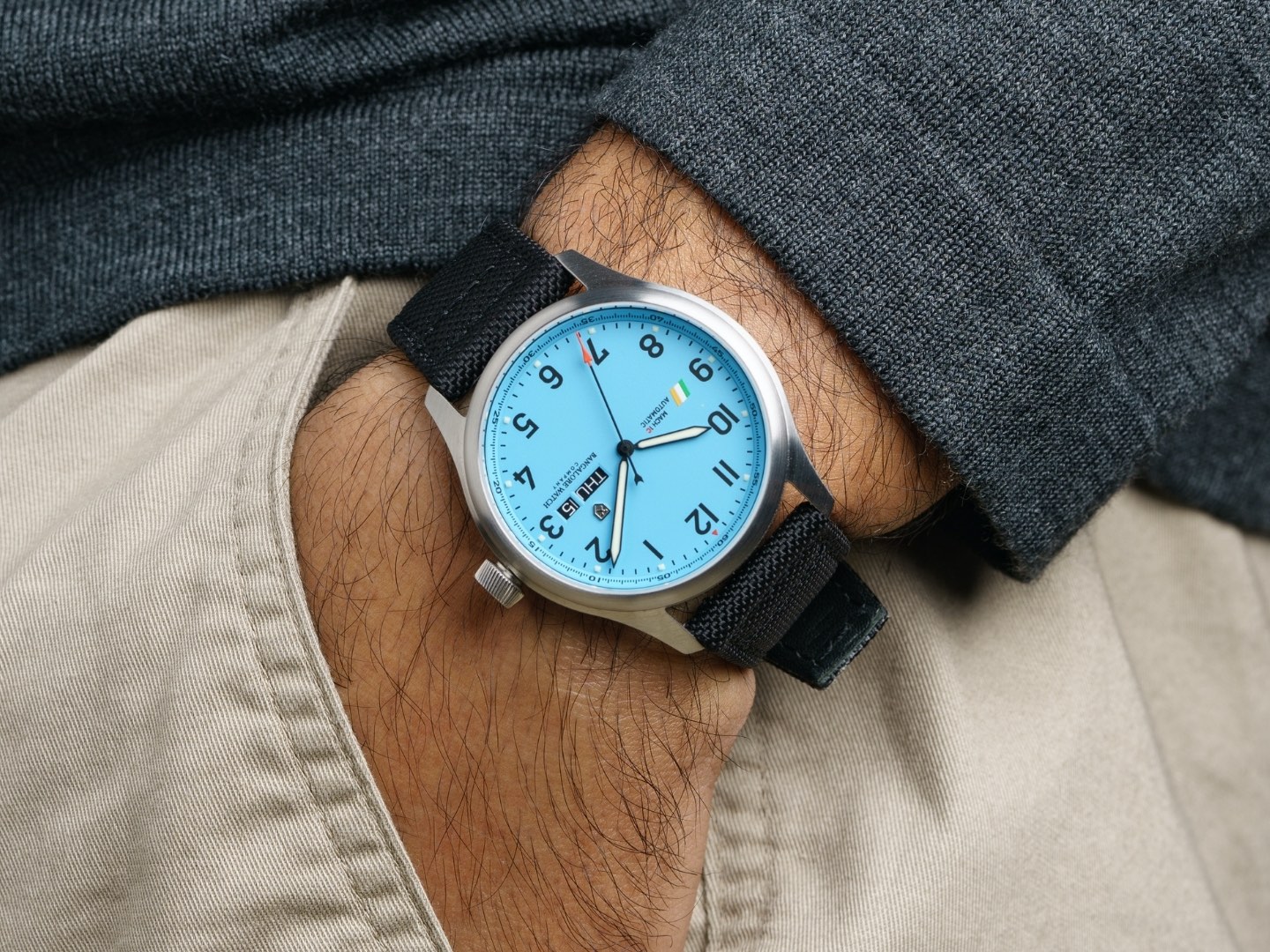 The original models had two dial options, the Civilian with 12-hour Arabic numerals and the Aviator with the main numerals relaying minutes (05 to 60) with 24-hour time inside. The new models have the Civilian (or Flieger Type A) design with black Arabic numerals contrasting well against the matte blue dial. The IAF elements remain intact with the tricolour fin-flash at 9 o’clock, hour and minute hands similar to those on a MiG fuselage and a red MiG silhouette on the tip of the seconds hand. The hour and minute hands are filled with Super-LumiNova C3, as are perimeter dots marking the hours. A day/date window sits at 3 o’clock with the brand’s logo applied above. 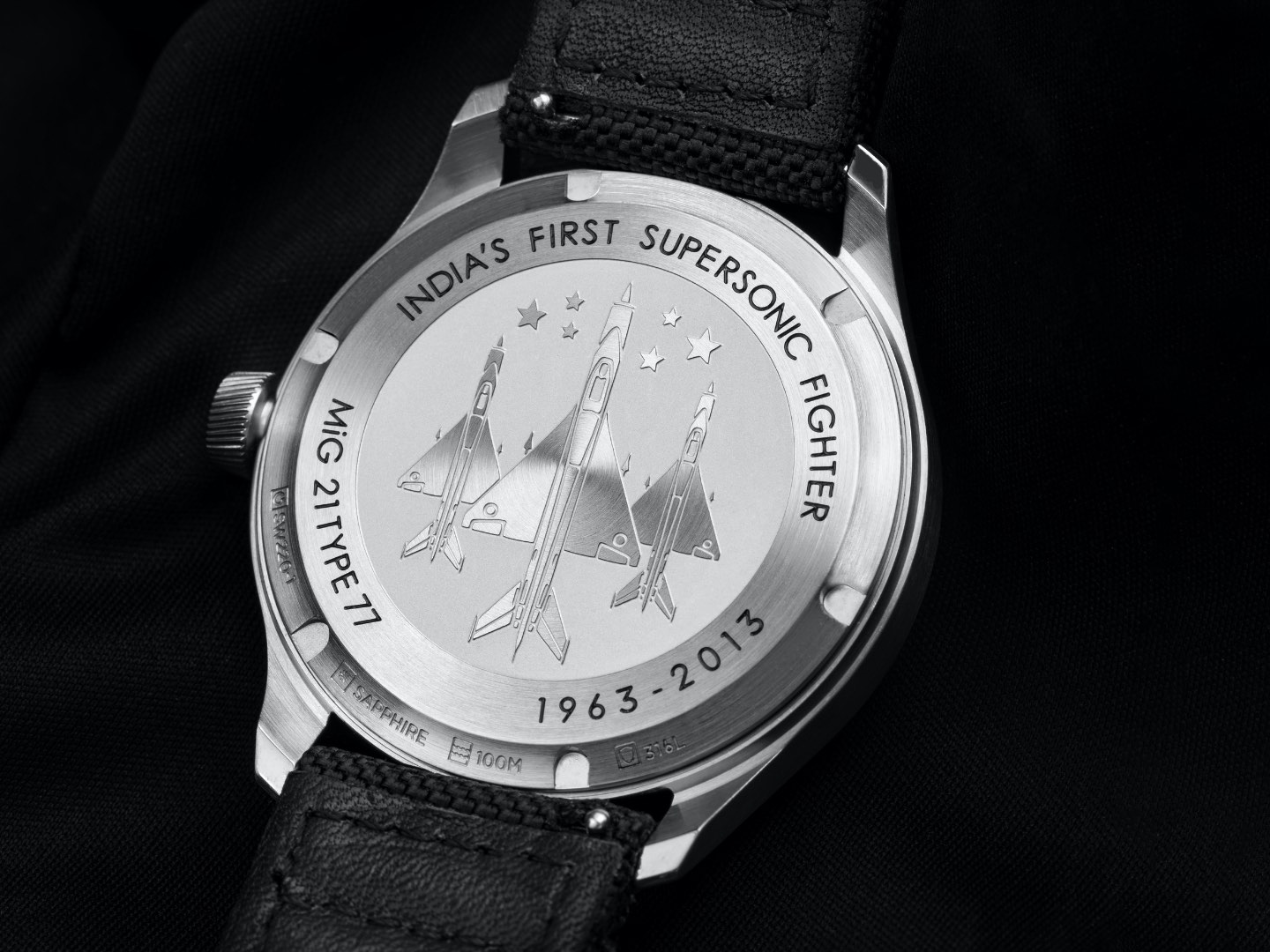 Powering the new watches is the same Sellita SW 220-1 automatic, equivalent to the ETA 2836-2. It has 26 jewels, beats at 28,800vph (4Hz) with a 38-hour power reserve. Functions include central hours, minutes and hacking seconds with a day/date complication. This particular movement comes undecorated but is hidden behind the solid case back. 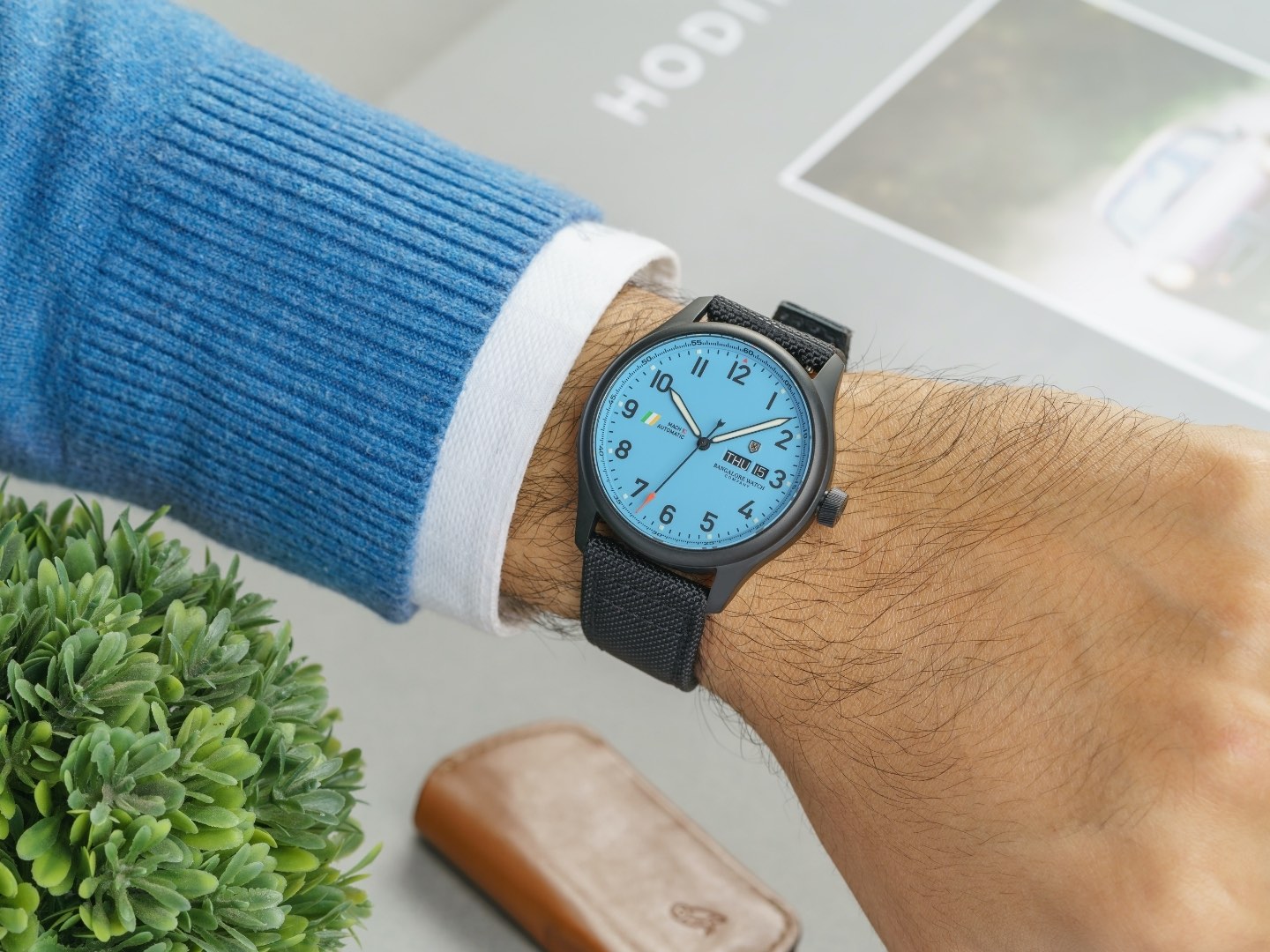