Kees Engelbarts might not a household name for most people. Readers of MONOCHROME, however, have been introduced to the watches of this most original Dutch engraver whom Frank has been following since 2009. Engelbarts is an independent watchmaker, a free spirit with a lively fantasy and a talent for engraving that situate his watches closer to art pieces than cookie-cutter watches made by the millions. Producing just six to eight watches a year, Engelbarts embraces the philosophy of handmade, an ideology that permeates just about every level of the watch, save the movements which are sourced from new old stock calibres. He is totally upfront about not being a watchmaker: he is an engraver who makes watches.  For 2020, Kees Engelbarts revisits his celebrated Skeletonised Tourbillon with even more daring feats of skeletonisation and a more muted, toned-down palette. The second watch he is introducing this year is Jumping Carp featuring a hand-engraved carp.

Engelbarts trained as an engraver in Schoonhoven (known as the ‘Silver Town’) in Holland and then moved to Geneva in the 1990s. Turning his hand to the diminutive dimensions of watch dials, Engelbarts attracted plenty of commissions from high-end Swiss brands. In 1997 he decided to make his own watches and, like any self-respecting painter or sculptor, all his pieces are signed. To date, Engelbart’s creations revolve around two central themes: dials decorated with mythical creatures (often inspired by Japanese folklore and the Japanese technique of Mokume Gane) and skeletonisation that verges on the radical.

If you compare the Argentium Tourbillon to the model we reviewed in 2017, you’ll notice the differences. Not only has Engelbarts toned-down the colour palette, but he’s taken his very own skeletonisation to more daring heights. For a taste of his former skeletonised watches, this bronze model will give you a feel for his organic approach. However, looking at this latest model with its barely-there support system, it’s a miracle the movement doesn’t come flying out of the watch. 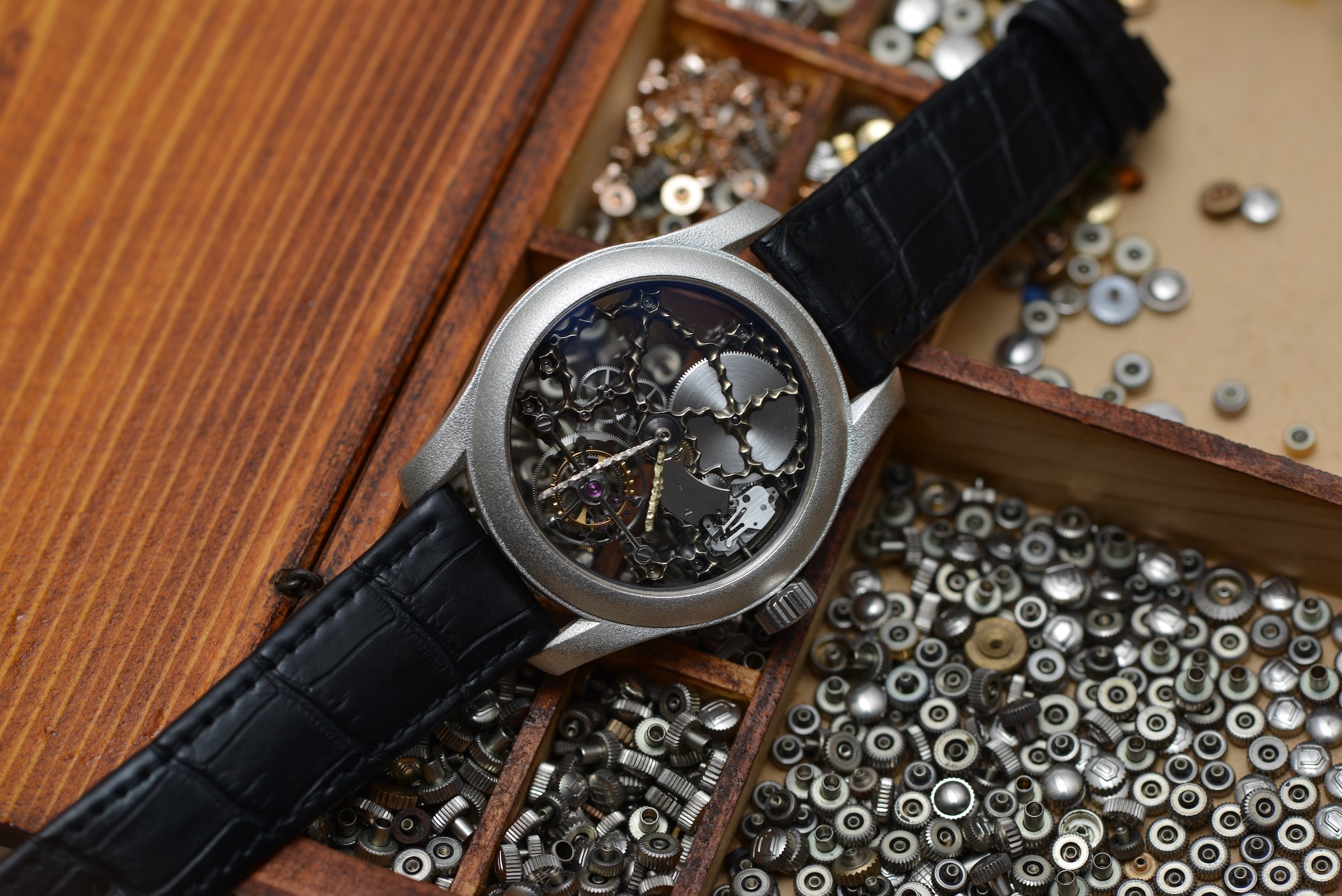 Forget about CNC machines to achieve near-perfect parts: Engelbarts relies on his hands and his intuition to create his organic skeletonised watches. Most skeletonised watches start life as a non-openworked (closed) movement that is then skeletonised by the watchmaker; in short, the supporting structure already exists. In Engelbarts’ world, skeletonisation takes on a very different meaning. When he skeletonises, he doesn’t just open up pre-existing bridges and plates, he removes the ones provided with the outsourced movement and designs his very own from a blank. The mainplate and bridges are then built from an entirely different material, in this case, German silver. The German silver structure holding the parts in place is then oxidised. In the ‘Making Of’ pictures, you can see the twisted German silver structure before and after oxidisation. 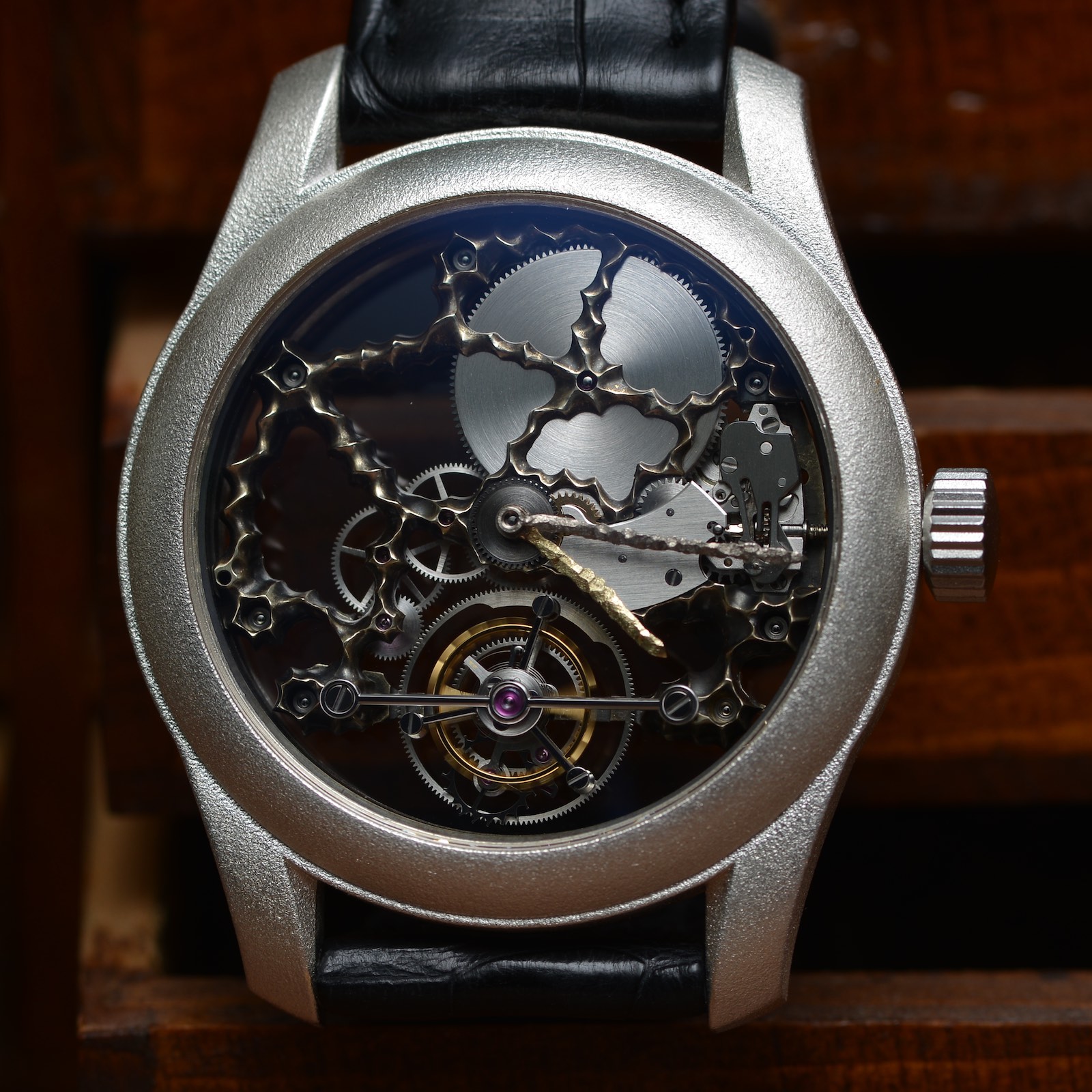 As Engelbarts admits, he doesn’t start with a drawing or a technical plan. “The rough outlines are drawn on the main-plate and the bridges with a marker to see which parts of the movement are essential and which parts are not needed…I then start to cut away roughly and little by little come to the final shape.” What emerges are these amazing twisted coral-like structures that leave plenty of negative space to see the movement. The tourbillon at 6 o’clock, the gear train and the barrel are discernible from both front and back, suspended in space. Speaking to Engelbarts the other day, he described that skeletonising his latest tourbillon piece was “a blast, no challenges, pure pleasure working on a piece like that. You see it growing, getting closer to the end result. I forget the time when I work on a watch like this”. 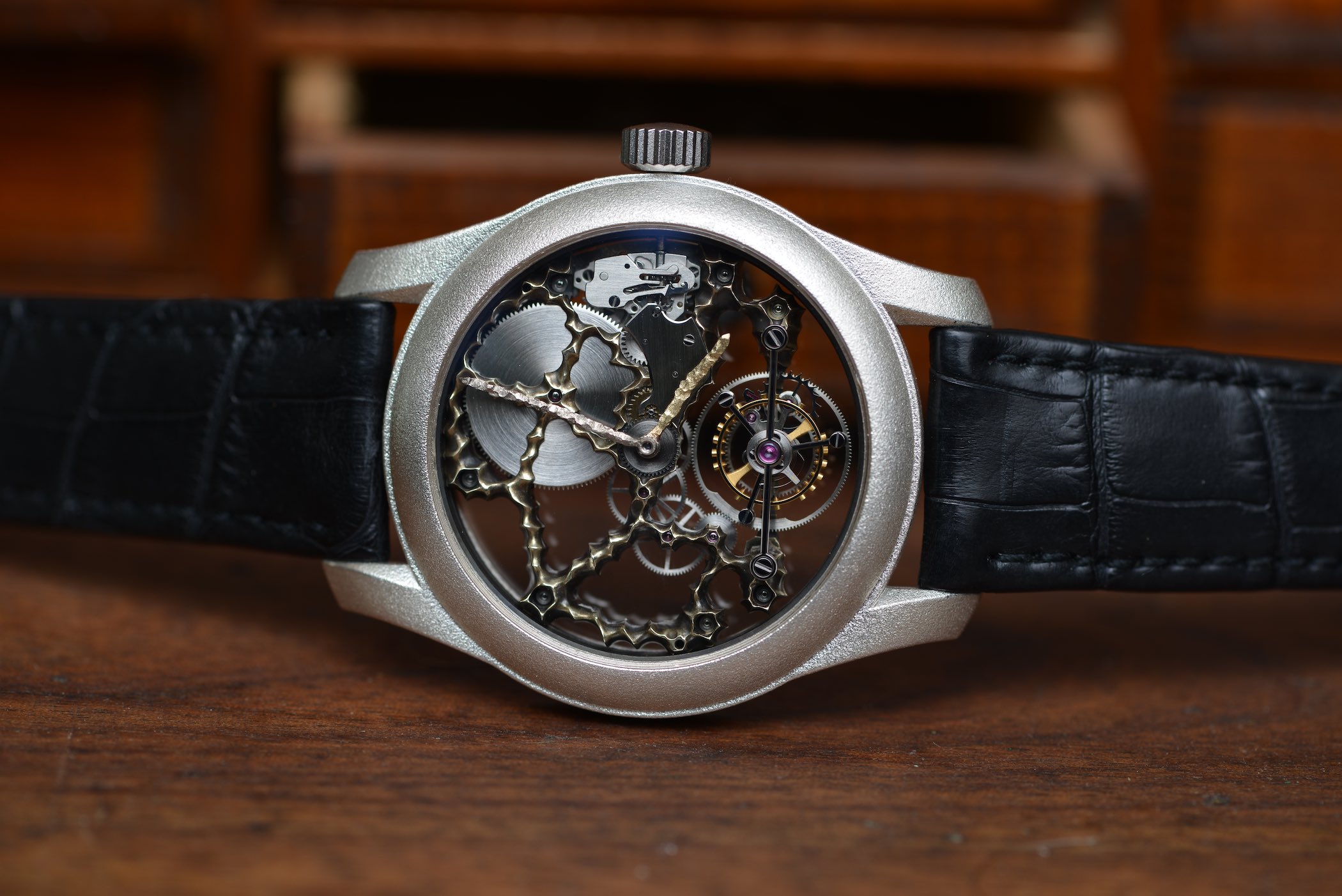 Both the Argentium Tourbillon and the Jumping Carp are housed in 39.5mm cases made from 935 Argentium, a silver alloy that uses germanium instead of copper and doesn’t oxidise or tarnish like sterling silver. Both cases have been hardened and then brushed to create an attractive surface. The movement is a Swiss hand-wound tourbillon calibre beating at 21,600vph and with a 72-hour autonomy.

The Japanese Connection and the Jumping Carp

Engelbarts is fascinated with dragons and other mythological creatures, many of them associated with Japanese folklore. Jumping Carp is the first in a series of three unique watches and the theme is obviously related to this most Japanese of all fish; the Koi carp. With his fervid imagination, Engelbarts wanted to depict the carp in motion, jumping up to enter “through the dragon gate to transform into a dragon (and therefore become a mythical creature and achieve eternal life)”.  If you look closely at the dial, you can see the carp with its iridescent scales and fins jumping out of the turbulent waters… I’m not sure I can see the dragon gate, but that’s part of the fun. Everybody will see what they want to see. 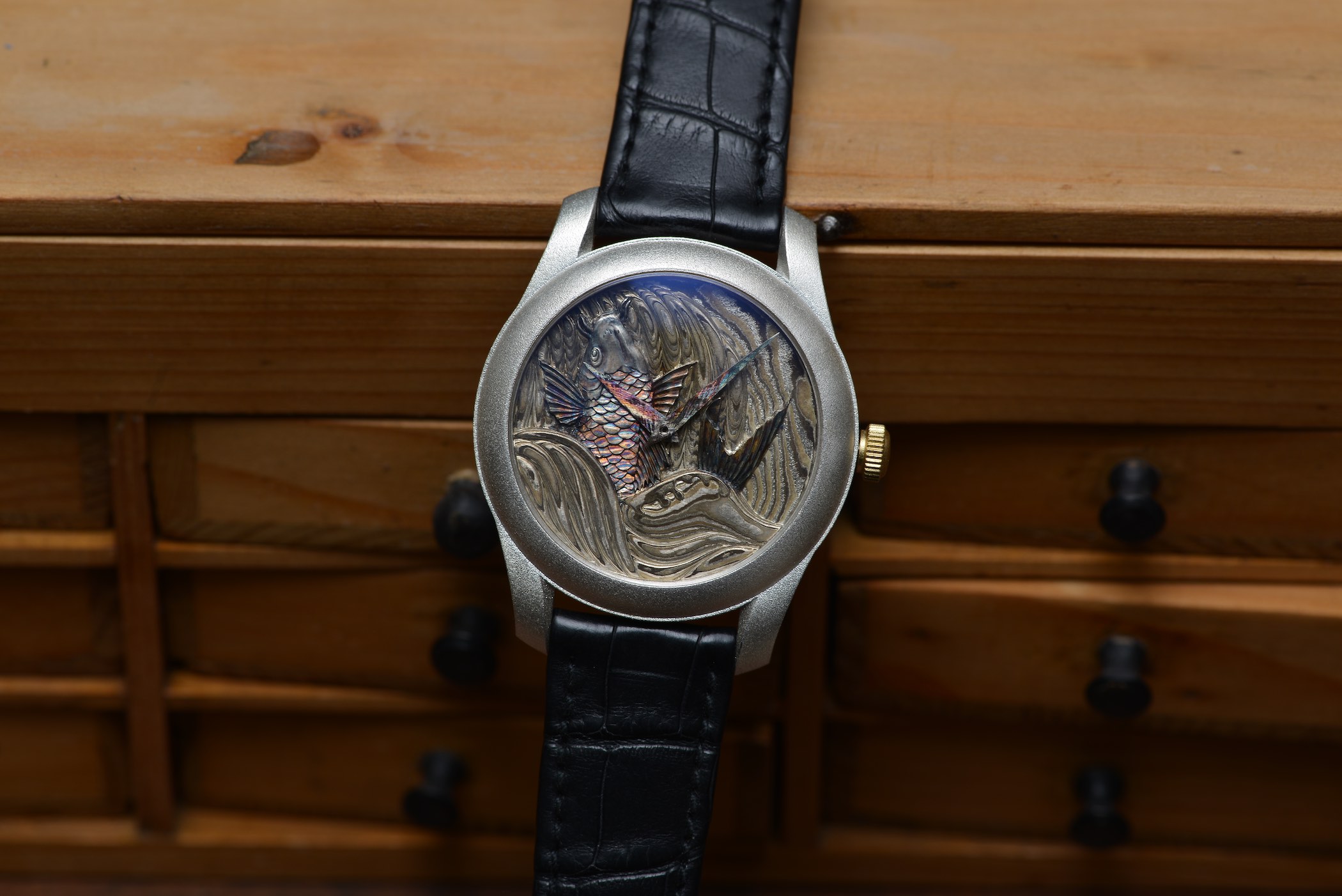 As those of you who have followed Engelbarts well know, he is also a master of the ancient Japanese technique of Mokume Gane. In fact, he is the first to have applied this technique to the dial of a watch. Mokume Gane is a mixed metal laminated procedure developed in the 1600s in Japan and is attributed to Denbai Shoami (1651-1728), a master craftsman who specialised in sword fittings in the prefecture of Akita. Loosely translated as ‘wood grain metal’, the distinctive layered patterns of Mokume Gane transform the appearance of cold metal into warm natural wood grain and was first used to decorate tsuba, the handguard of a Japanese sword.

The art of Mokume Gane consists of layering different non-ferrous metals (a bit like mille-feuille pasty), which are then heated in an oven to the fusion temperature of the metal that melts first. As Engelbarts explained to me in an interview in 2018, “once you get your solid homogenous block with all the layers, the fun begins and you can do all sorts of things to it – bend it, twist it, engrave it and, like wood, expose the grain of the metal”. Using a tiny U-shaped scalpel and a low-relief engraving technique, Engelbarts breathes life into the stacked layers of silver and white gold that form the base. The layers of Mokume Gane accentuate the shapes of the waves and add volume and depth to the scenery.

The level of engraving is unparalleled as the sinuous shape of the carp, and the swirling waters come to life. Even the gold-plated hands that look like twisted golden branches are the result of Mokume Gane. The layers of metal used in Mokume Gane provides a fascinating depth. For this particular dial, he has used 19 layers of metal, which have then been oxidised and coloured with a process involving liver of sulphur. 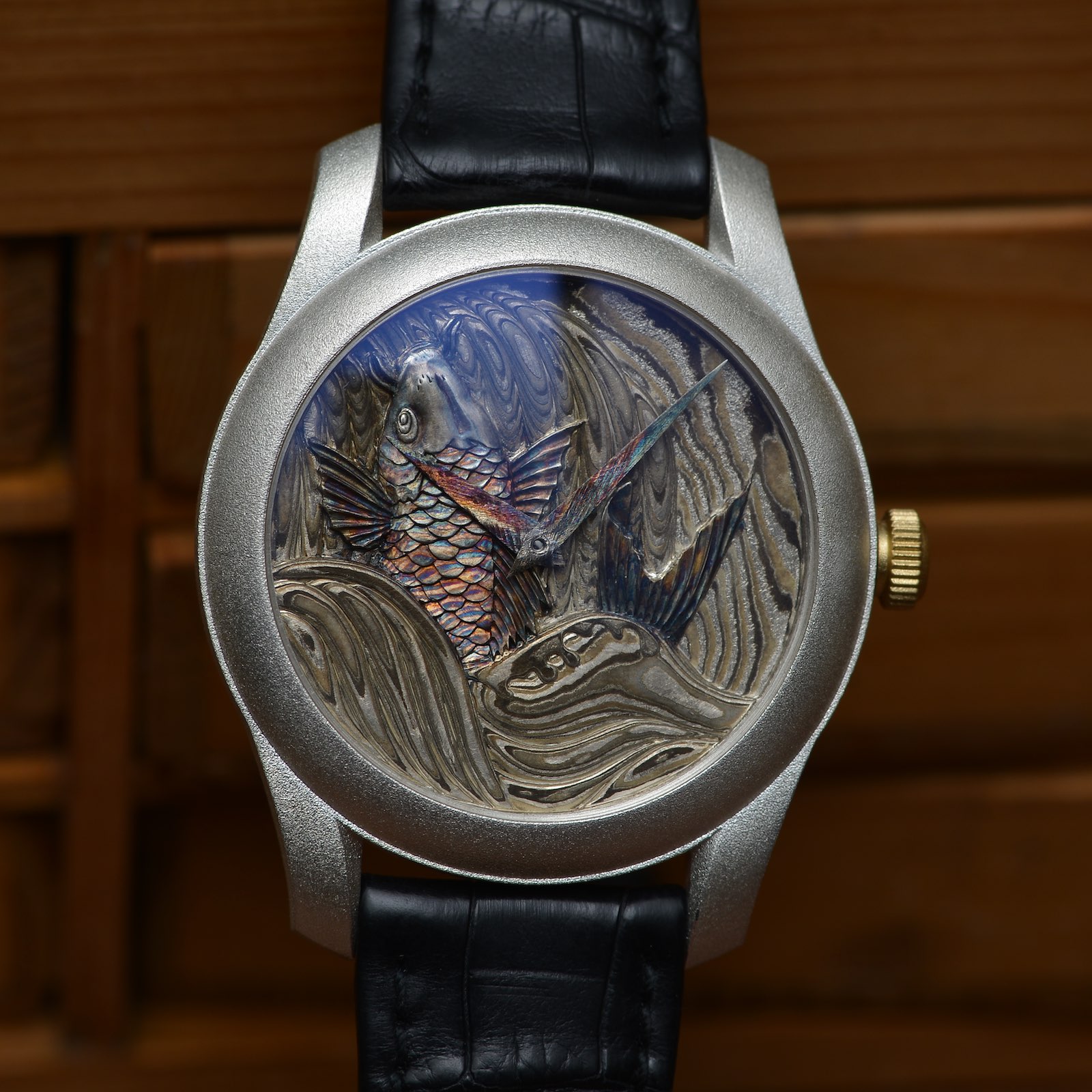 The iridescent colours you can see are obtained from liver of sulphur, a foul-smelling potassium-based compound that creates patinas on metals. The intensity of colour depends on the concentration of the solution and can range from light yellow all the way up the spectrum to brown, blue, violet and even black.

As Engelbarts likes to say, the case is the frame for the artwork. Like the Argentium Tourbillon, the 39.5mm case of the Jumping Carp is made from Argentium 935 and displays the same matte brushed finish. The only difference between the two is that the Jumping Carp has an 18k yellow gold crown. As he says, “I don’t like polishing my cases because polished surfaces don’t stay polished very long” and they are more prone to scratches. Surprisingly thin for a watch with so much artwork on board, the height of both watches is 9.5mm and the dial and movement are protected with sapphire crystals. 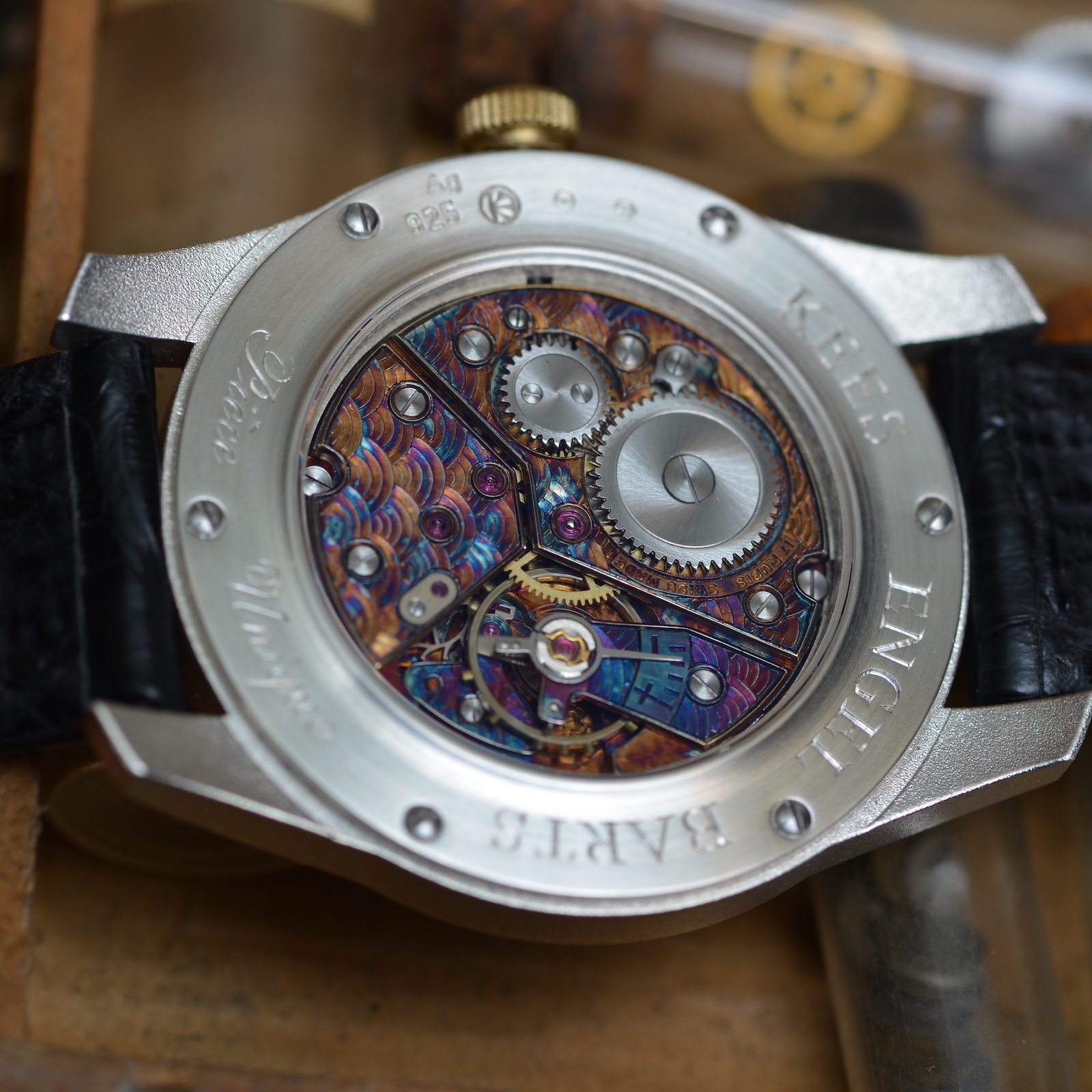 The Jumping Carp is fitted with a new old stock manual-winding Peseux 330. This vintage Peseux 330 is the ancestor of the Peseux/ETA 7001, a simple but noble manual-winding movement with a frequency of 18,000vph and a 43-hour power reserve. Turning the watch over is another treat since the mainplate and bridges have also been hand-engraved with an Asian wave pattern, silver-plated, oxidized and then coloured with acids. Ranging from purple to blue and orange, the iridescent colours change according to the light.

The Argentium Tourbillon is a unique piece and will retail for CHF 120,000 (not incl. taxes). The Jumping Carp is the first of three and the watches will be sold as a trilogy. The other two are not finished yet.