After several years working in Switzerland, Stepan Sarpaneva returned to Finland to create his own brand in 2003. Since then, the independent Finnish watchmaker has shaped a truly personal creative universe. Stepan designs and crafts watches like no other. Because the current situation does not allow us to fly to Helsinki and meet Stepan in his atelier inside an old cable factory, we arranged a phone interview to talk about his unique approach to watchmaking… 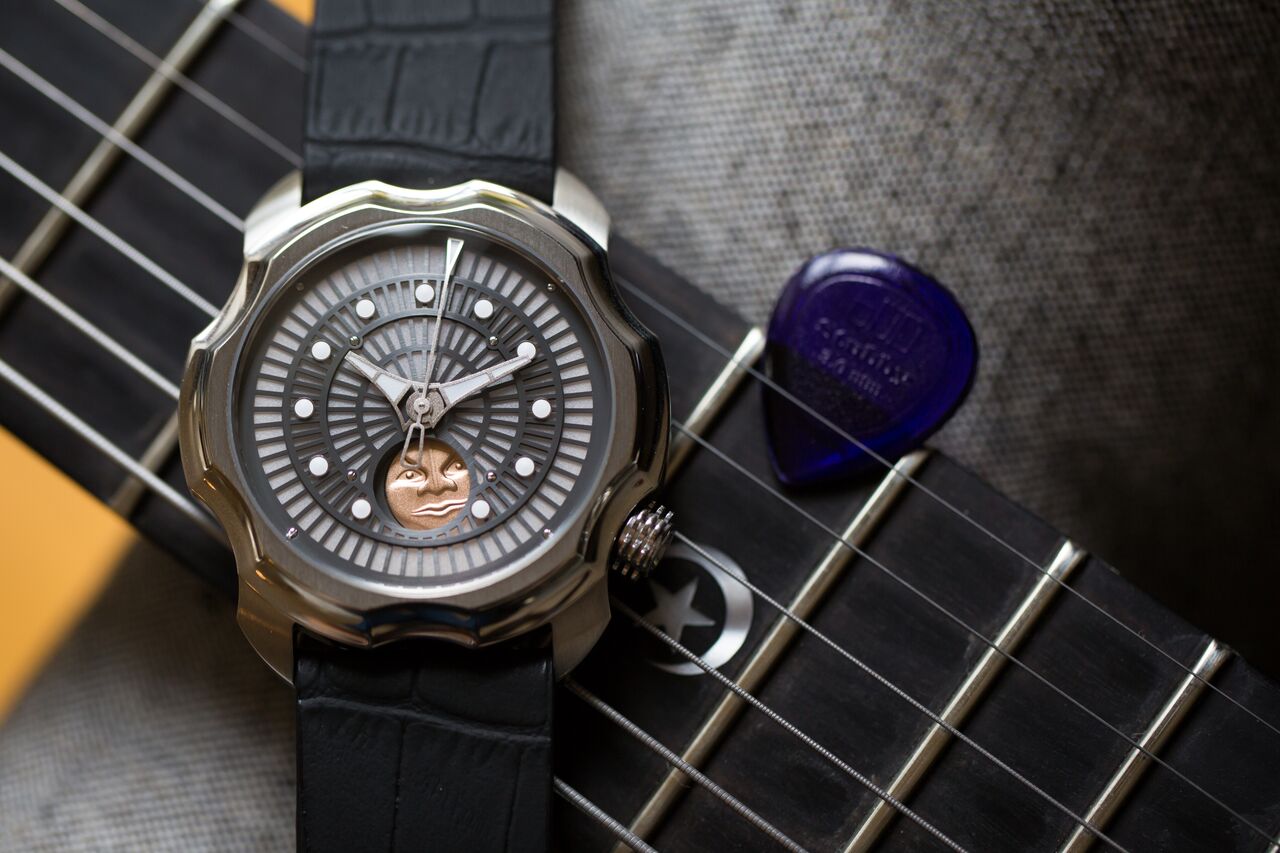 Xavier Markl, MONOCHROME – How did a young Finnish kid end up being a watchmaker and creating his own watches?

Stepan Sarpaneva – I ended up in a watchmaking school by accident. I was not really interested in studies at high school… My mother told me that maybe I should follow in my father’s footsteps and become a goldsmith. So, I applied to train as a goldsmith but I had to select another option and put down watchmaking. I went through tests for both schools and was selected directly for the watchmaking school. For goldsmith, I was in the sixth position on the waiting list. I thought that I would go to the watchmaking school for one year and then apply again to the goldsmith apprenticeship. 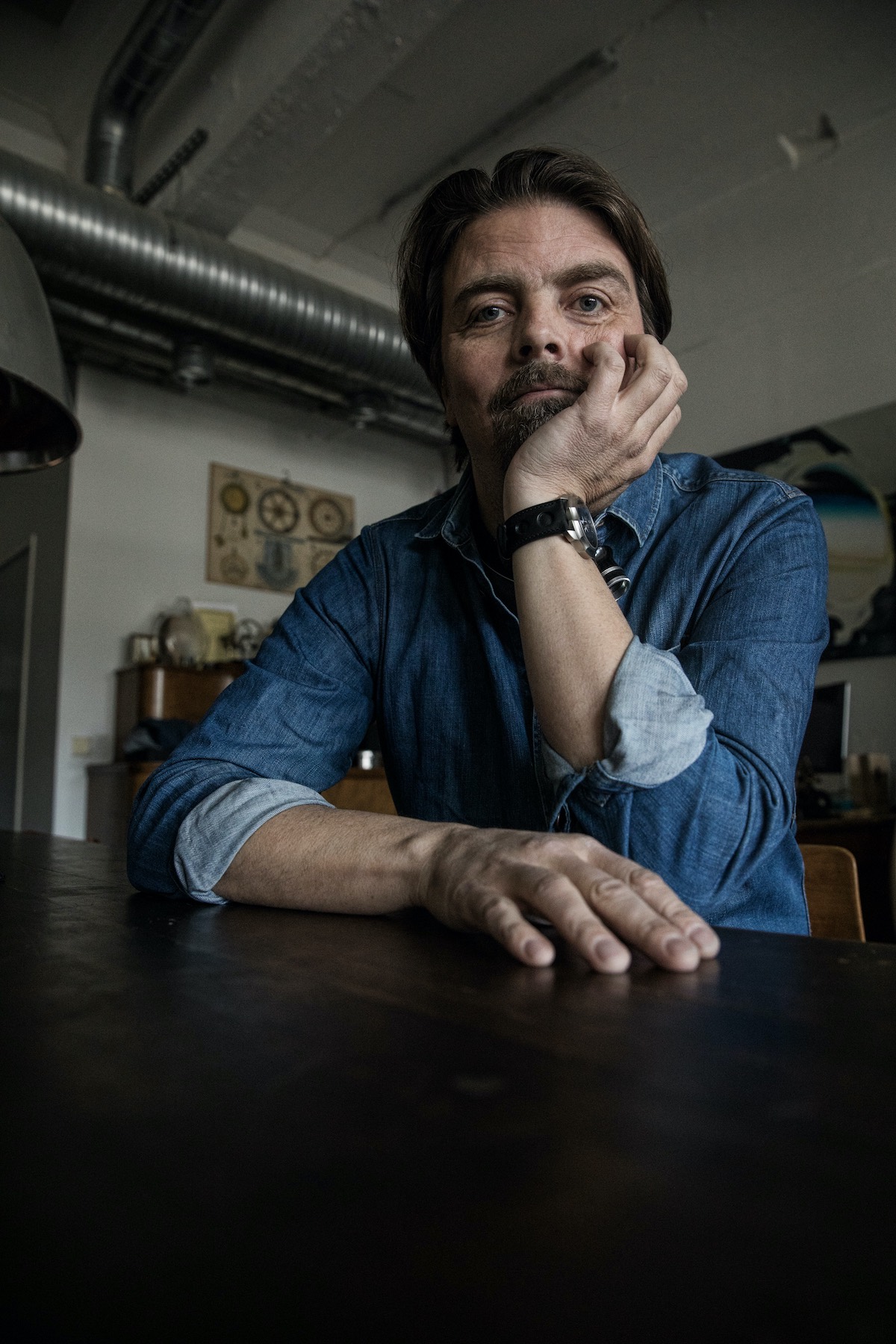 I figured out that watchmaking suited me better than anything I had done before. I started at the Tapiola school in Finland in 1989 and finished in 1992. At the time, there was no work for watchmakers in Finland. Luckily, I had applied to study in Wostep in Switzerland, in Neuchatel. I started there at the beginning of 1994 on their refresher course. The Swiss watchmaking diploma would be very important if I wanted to go and work anywhere. After five months at Wostep, I graduated with the best results.

In summer 1994, I started to work with Piaget in the small village of La Côte-aux-Fées, in the after-sales department. I stayed there for two and a half years. Then, I went back to Wostep to follow their complicated watches and restoration course.

After the course, in 1997, I got a job with Parmigiani. I was working in a small, two-person department with Kari Voutilainen. Two Finns in the same atelier. Kari was my boss, I was his helping hand and learned to work the traditional way. The name of the department was ‘Pièces uniques and private label’. We were basically in charge of special projects, unique pieces, complications built the traditional way. It is important to understand the way we were working. I completed watches that required more than 800 hours of handwork… 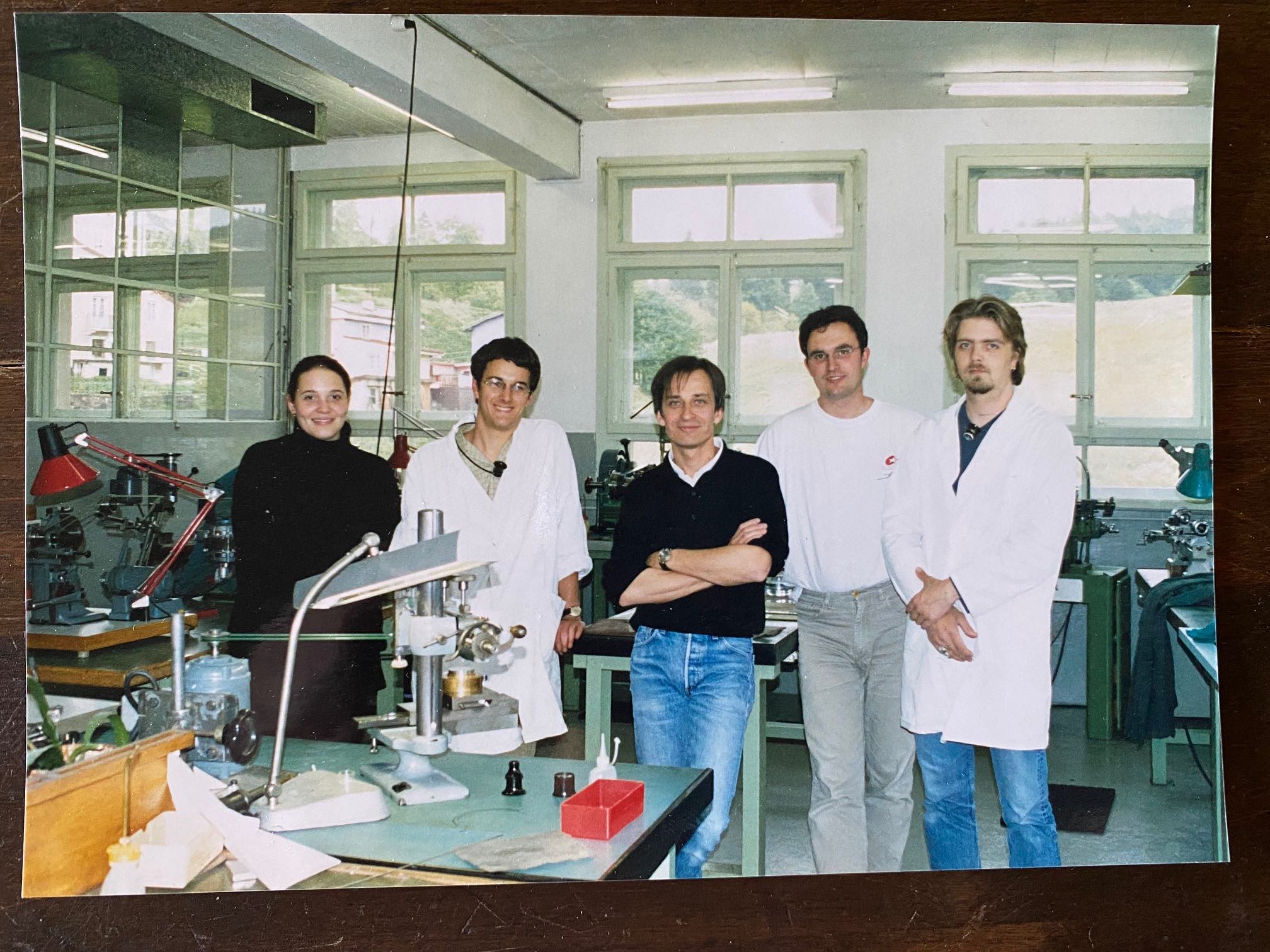 After that, I went to work with Vianney Halter in Sainte-Croix. At Parmigiani, I had learnt to work the old school way. With Vianney, I figured out that there are rules but that you can also throw them away, that you can think outside the box. That was very important. I have worked for one year and a half with Vianney. We made the Trio, the Goldpfeil… It was an amazingly creative work. Vianney was more a watchmaker than a businessman, but it was truly an eye-opening time.

In the year 2000, I went to work with Christophe Claret. It was a way to get a salary every month as planned. I was manufacturing tourbillions and Westminster repeaters and I stayed there until I went back to Finland. Claret had told me that if I went back to Finland he would give me some work. He did. That was something that helped me when I started my company here in Helsinki. I kept working for Claret for some time, in Finland and in Switzerland, until I was able to live from my own work.

In 2003, you created Sarpaneva watches and in 2004 S.U.F Helsinki (SarpanevaUhrenFabrik, a more accessible sister-brand). What made you decide to create your own brand?

When I started to work at the Piaget aftersales service, I wanted to learn more and more. I was really hungry to learn and that gave me ideas. I shared my ideas and opinions but was told that it was not my job to design watches or movements. 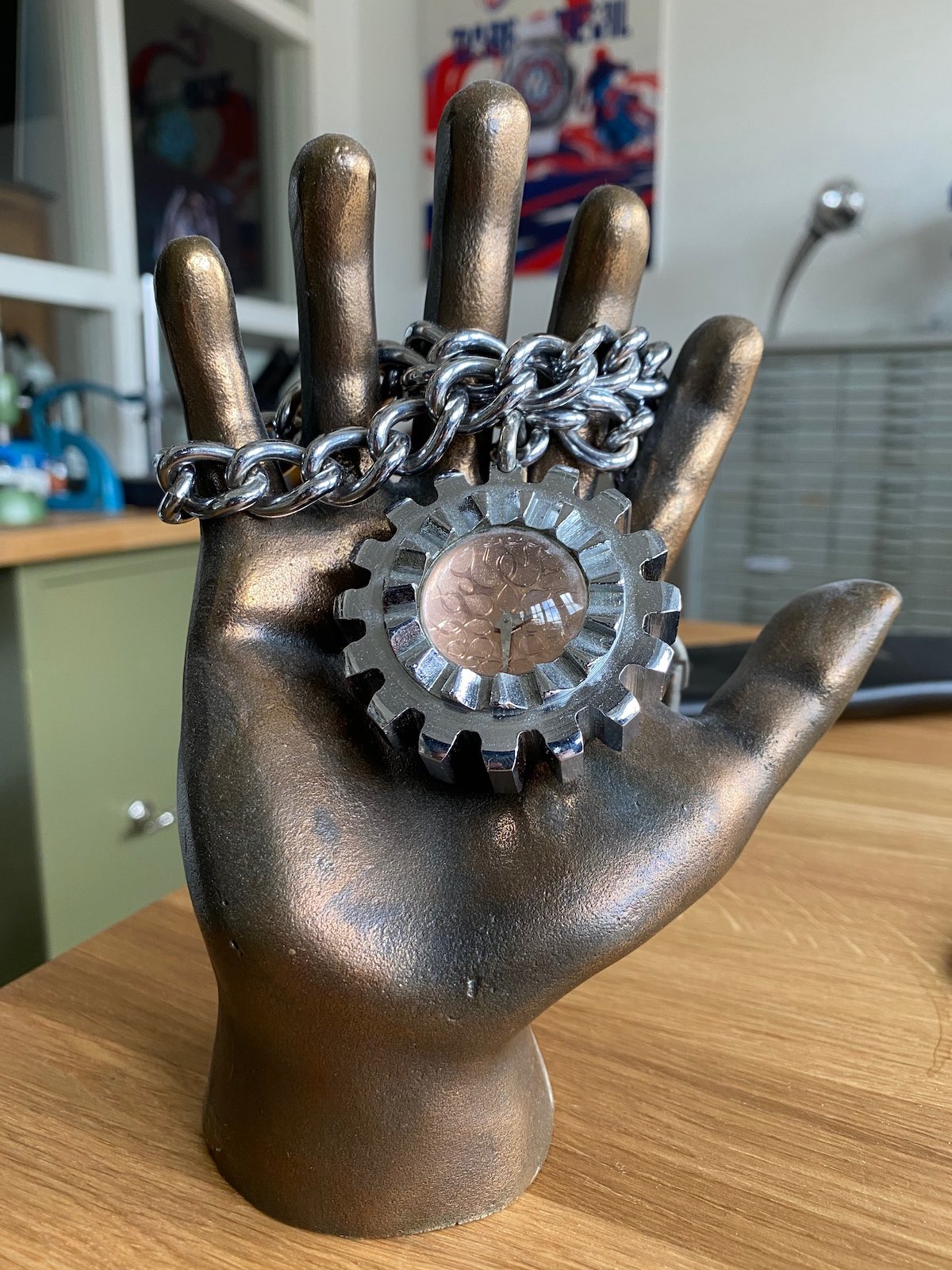 My father was a jewellery designer, my uncle was a designer, my grandfather was a blacksmith. I had that idea that we have to create something. The first watch I made was a pocket watch made from my motorcycle’s kick start pinion. That was like the start of the whole thing. Everything I had done was for myself. But one day, while I was still at Parmigiani, a retailer saw that I was making a wristwatch and wanted to order one. I thought ‘OK, that’s cool, that might be something that I could do’. I made a watch and I sold it. Still, it took a few years before I started to take it seriously.

Unlike most of the brands on the market, your watches feel like truly personal creations.

You can be a very good watchmaker but it does not mean that you can make great watches. You can be a great designer but imagine watches that are impossible to make. That’s never easy. It is difficult to find your own path, your own DNA that stays there. There’s always something that you find cool… I try to keep it my own way, that it looks my style. I have been beveling bridges for hundreds of hours during my career, but I don’t necessarily need to do that on my watches. I try to make great watches that are still reasonably priced. It is not a money-making machine. I want to be honest and I don’t want to try to become something that I don’t want to be. I try to avoid retailers, the press. And I like it. I am lucky because I can do my work from here in Finland. It gives me the freedom to be different.

At the same time, I follow very closely what is happening in the watch industry. But I try to stay out of everything. 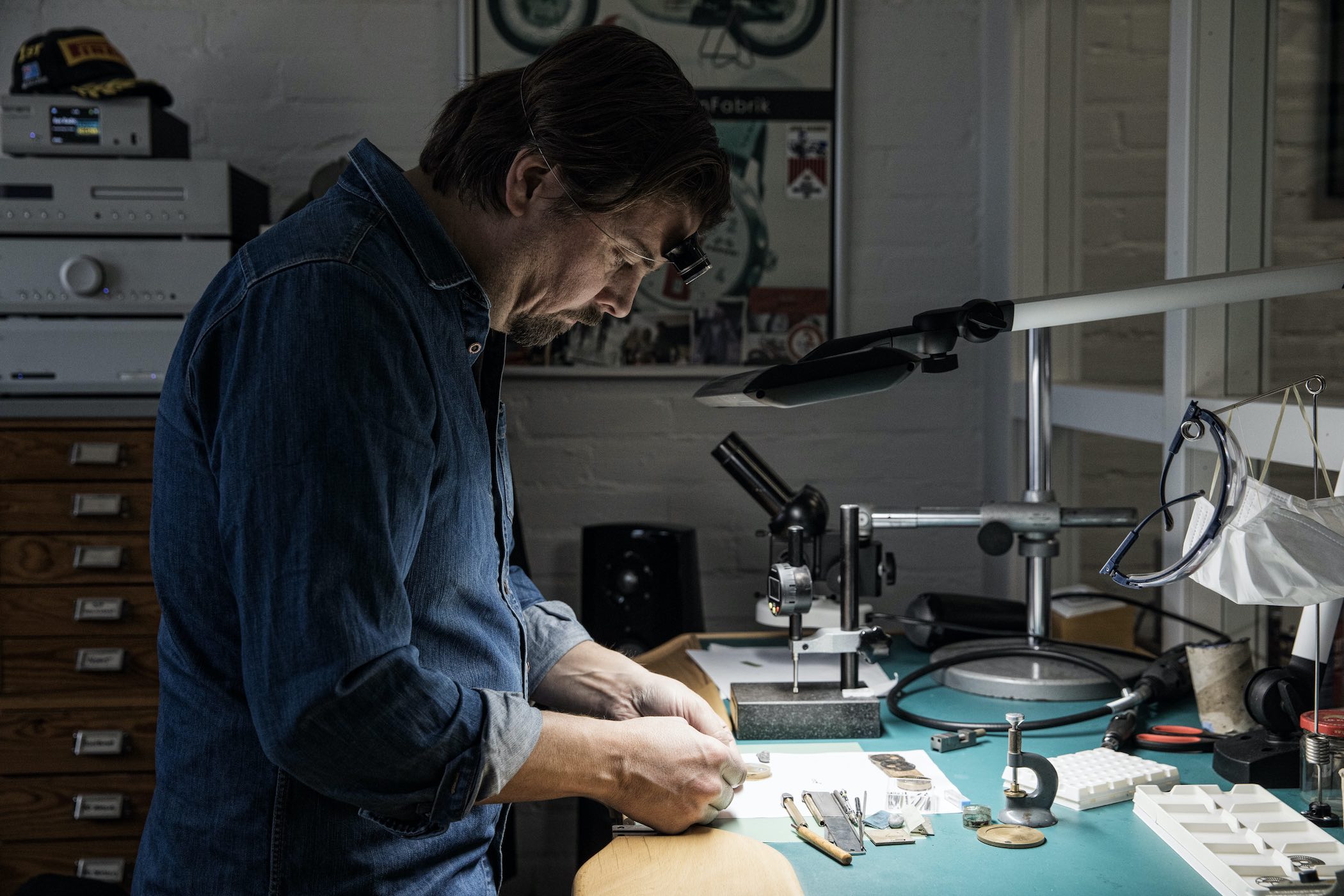 Where does your fascination with the Moon come from?

One day I hope you get the chance to visit me in Finland and you’ll understand. In wintertime we have that special daylight, the Moon is really special because it is so dark here. It has been with me all my life. I can remember when I was a kid skiing at night but you could see perfectly because of the moonlight. The Moon was there before we were here. The Moon is a good thing. If you can show it in a watch… 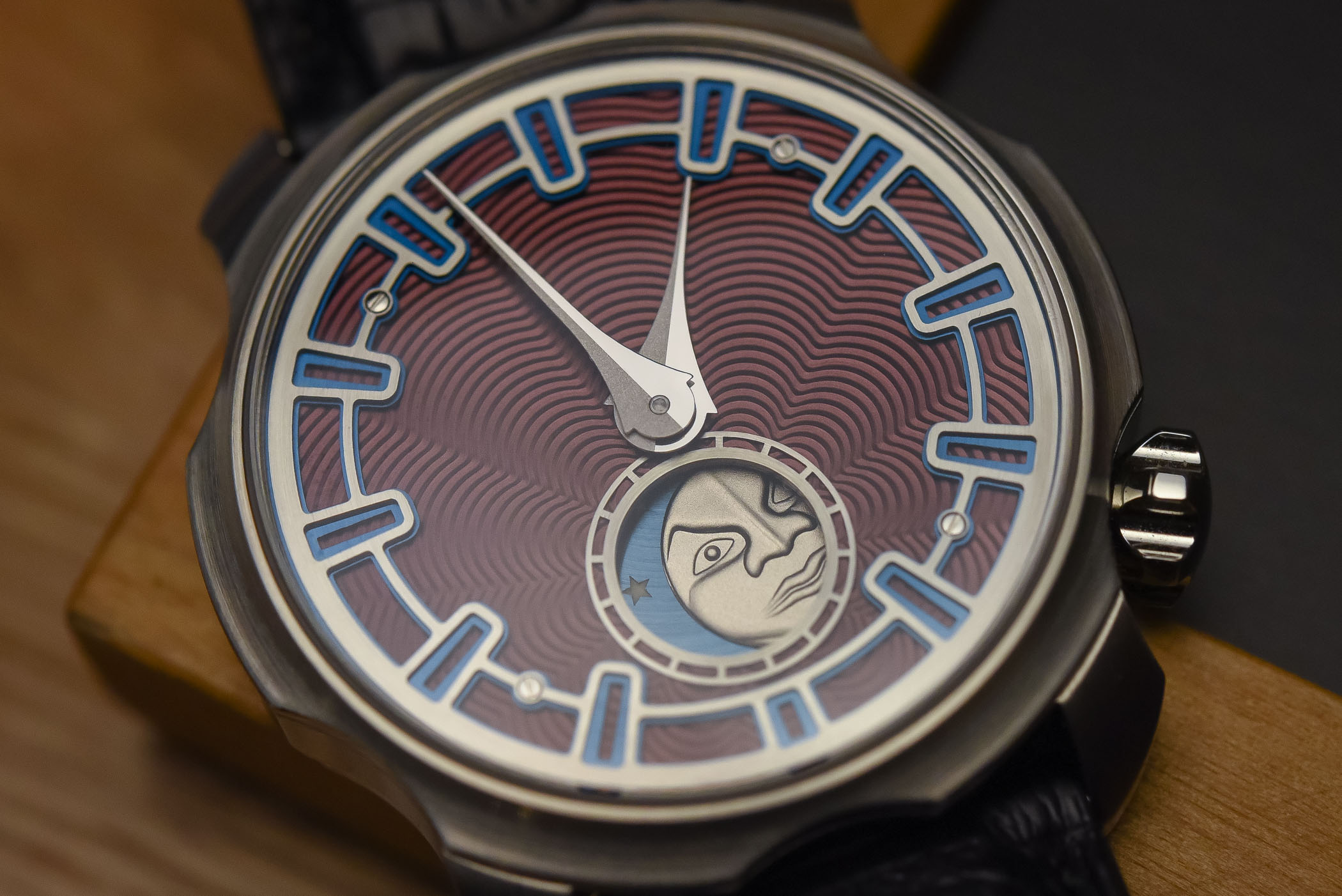 How was the Sarpaneva Moon born?

At the 2007 Basel fair, I had no booth, I was travelling with my watches in a backpack, showing them, for instance, in a cafeteria if someone was interested. I was just a watchmaker showing my creations. But at the end of 2007, Vianney called me and asked me if I wanted to come to their booth for 2008 that was at the same place as the AHCI. He told me, ‘Philippe Dufour is no longer coming, he’s got nothing to show, we have space, do you want to join us?’ 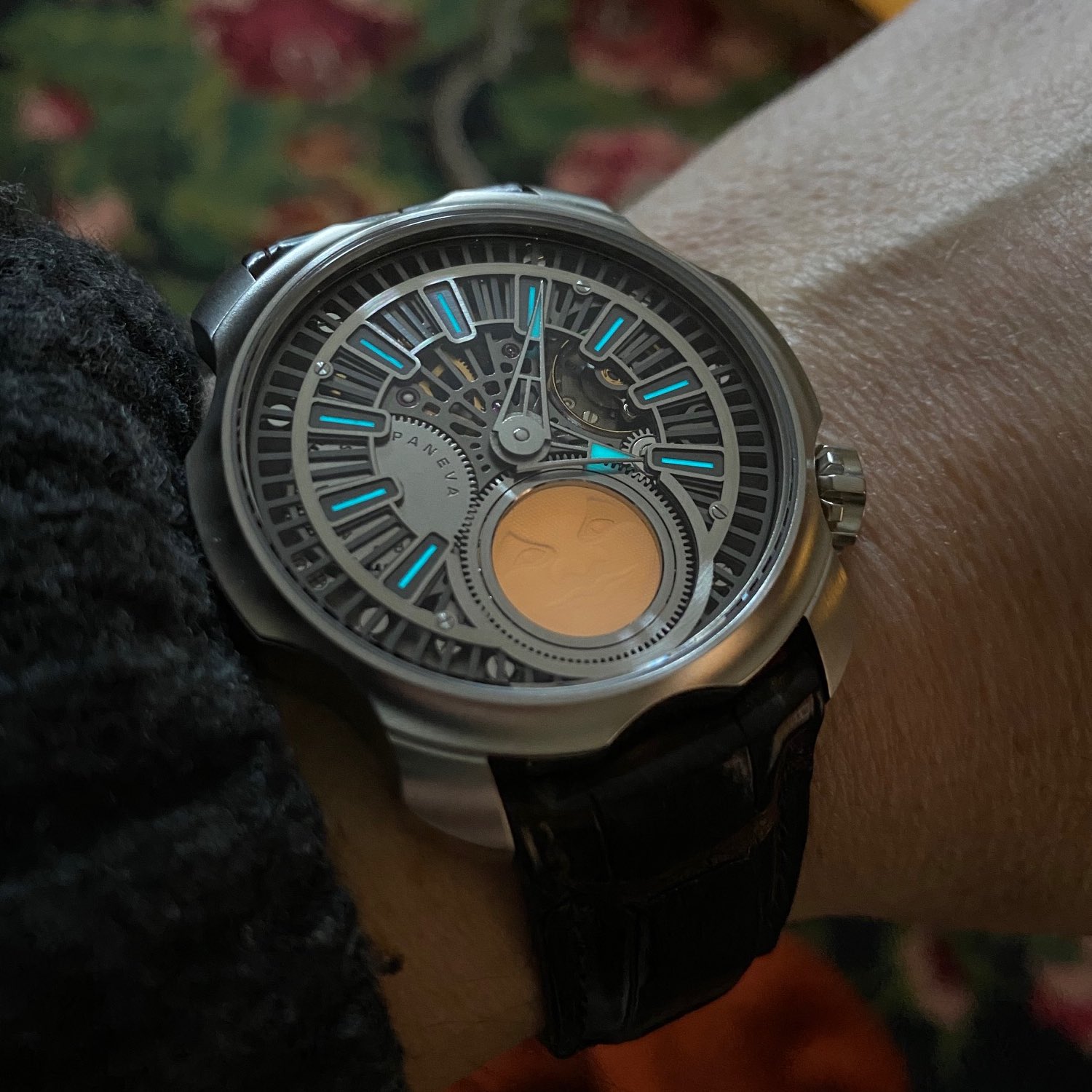 I said yes of course. My first concern was how to pay for this and I took out a loan. Then I had to create a new model and ended up creating three. That was the beginning of the Korona: the K1, the K2 and the K3 with moon phases. I had already designed the K3 complication integrated into a Soprod calibre. It was not a module but an integrated complication, that’s why I used Soprod. It gave me the freedom to do so. For the moon, I had that yellow circle, it looked very boring. Looking at watchmaking history books, in particular, that of Breguet, I noticed watches with a hand-painted face for the moon. That was the beginning.

I did not want a painted or engraved moon because I wanted more depth and volume. I wanted it to be really tridimensional. I designed something, got some stamping tools, and an engraver’s hand to finish the lips, the eyes and that’s how the look of the face was born. Since 2008, the same face is on my watches. It is a trademark. I like the idea that it is different and fun. I would not like a reproduction of the surface of the Moon. 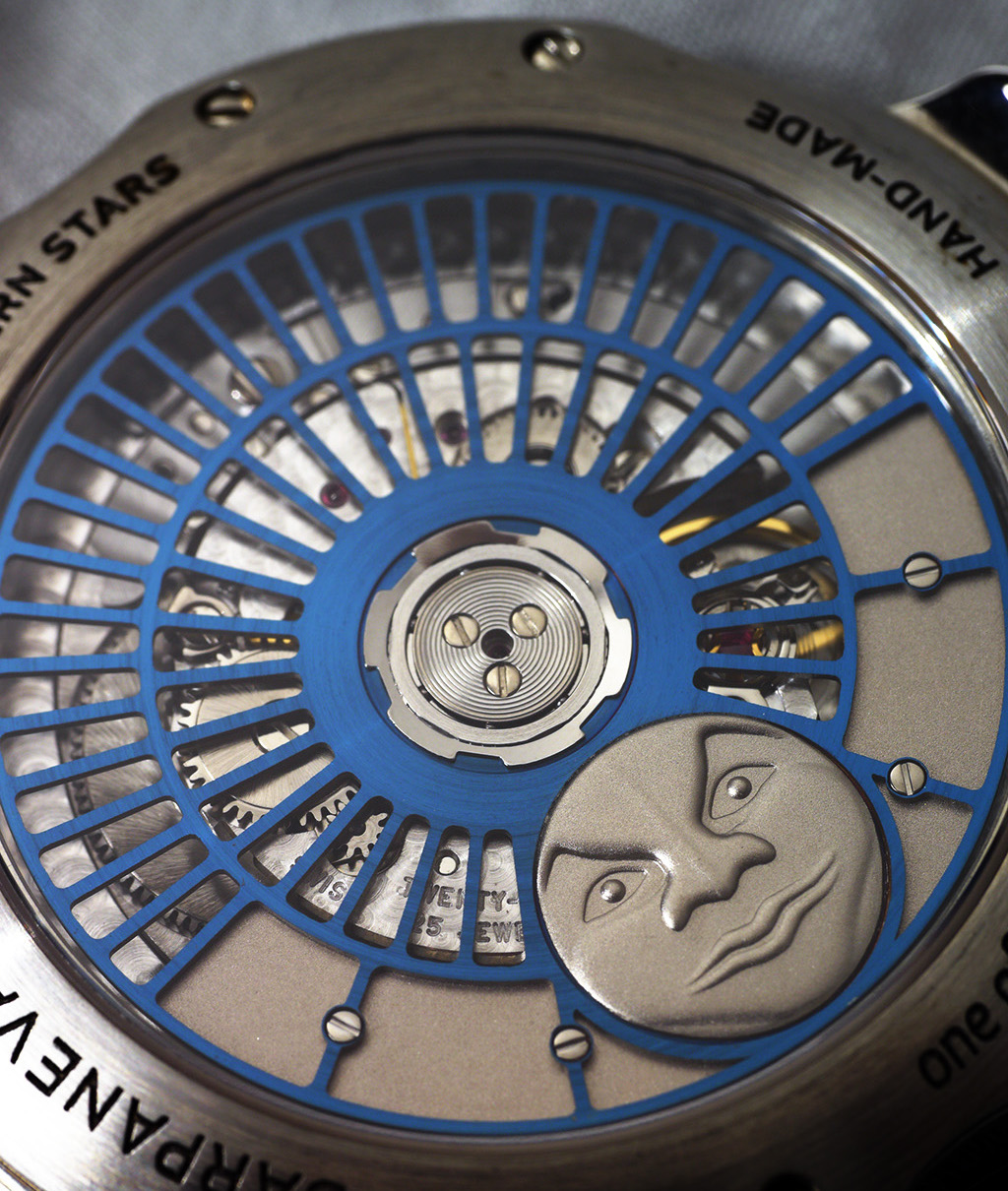 Backside of the K3 Northern Stars – photo courtesy of Deployant.com

In 2008 when I launched it, no other brand had faces on their moons. A couple of years later, it was everywhere.

Then a few months ago, there was the creation of the Lunations.

Well, a lot of people did not understand my watches or take me seriously as a watchmaker. It is just that I don’t like to talk so much and show off. I have worked on the most beautiful watches at the end of the 1990s, but it is not important for me. 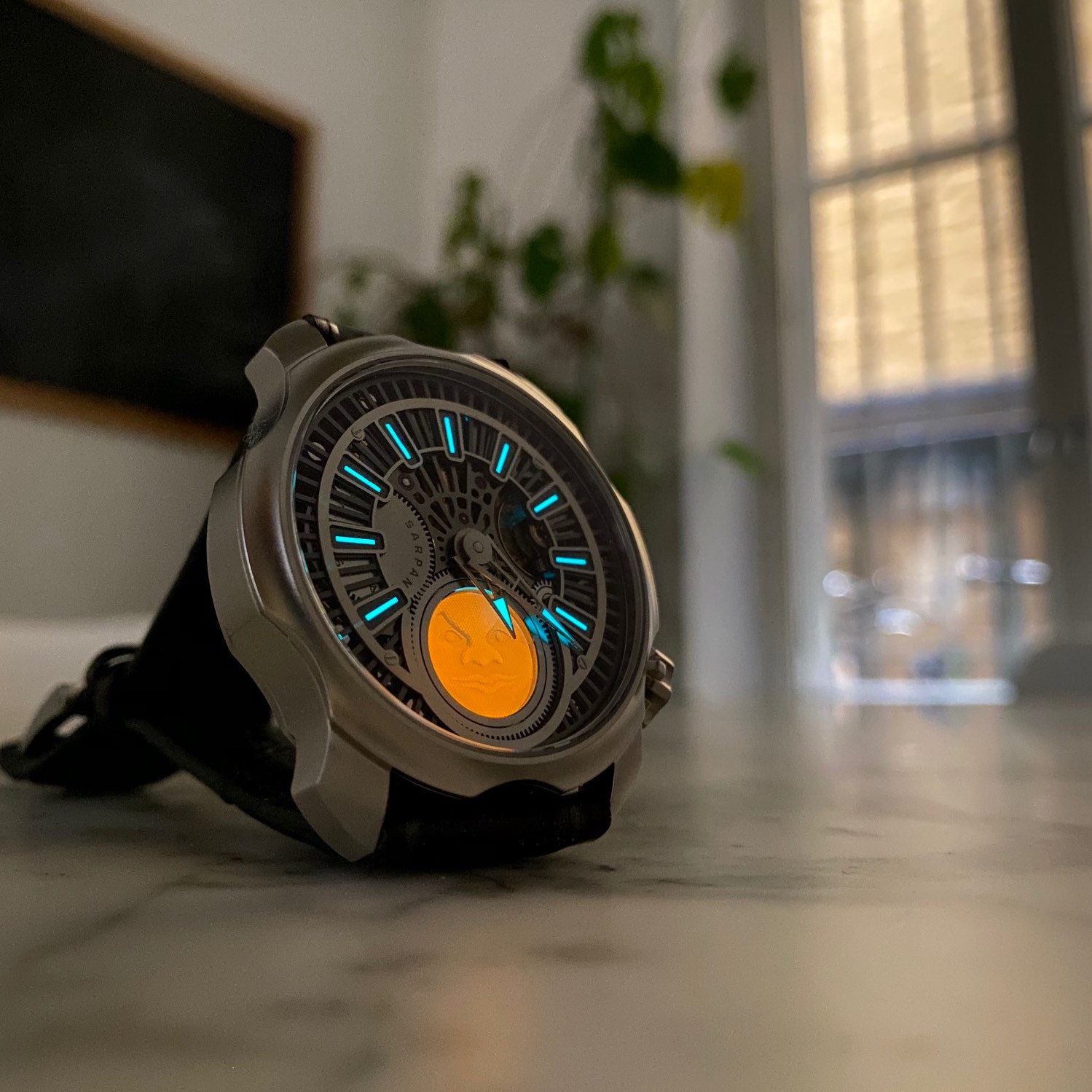 A lot of people were asking me ‘are you going to make your own calibre?’. I always thought that I would do it someday, but it required a lot of money. It was important for me to keep doing what I was doing and started to do it little by little. I started working on the design back in 2011, on the mechanism that was used in the Lunations moonment. It was very fun to make and I needed it for my own motivation. I really need to work on projects like this, to build something from scratch, from every wheel to every pinion. Going back to watchmaking like I was doing for Parmigiani, Vianney Halter or Claret. I have orders for several watches but it takes so long to manufacture. I am the only guy that works on them, crafting them one by one. 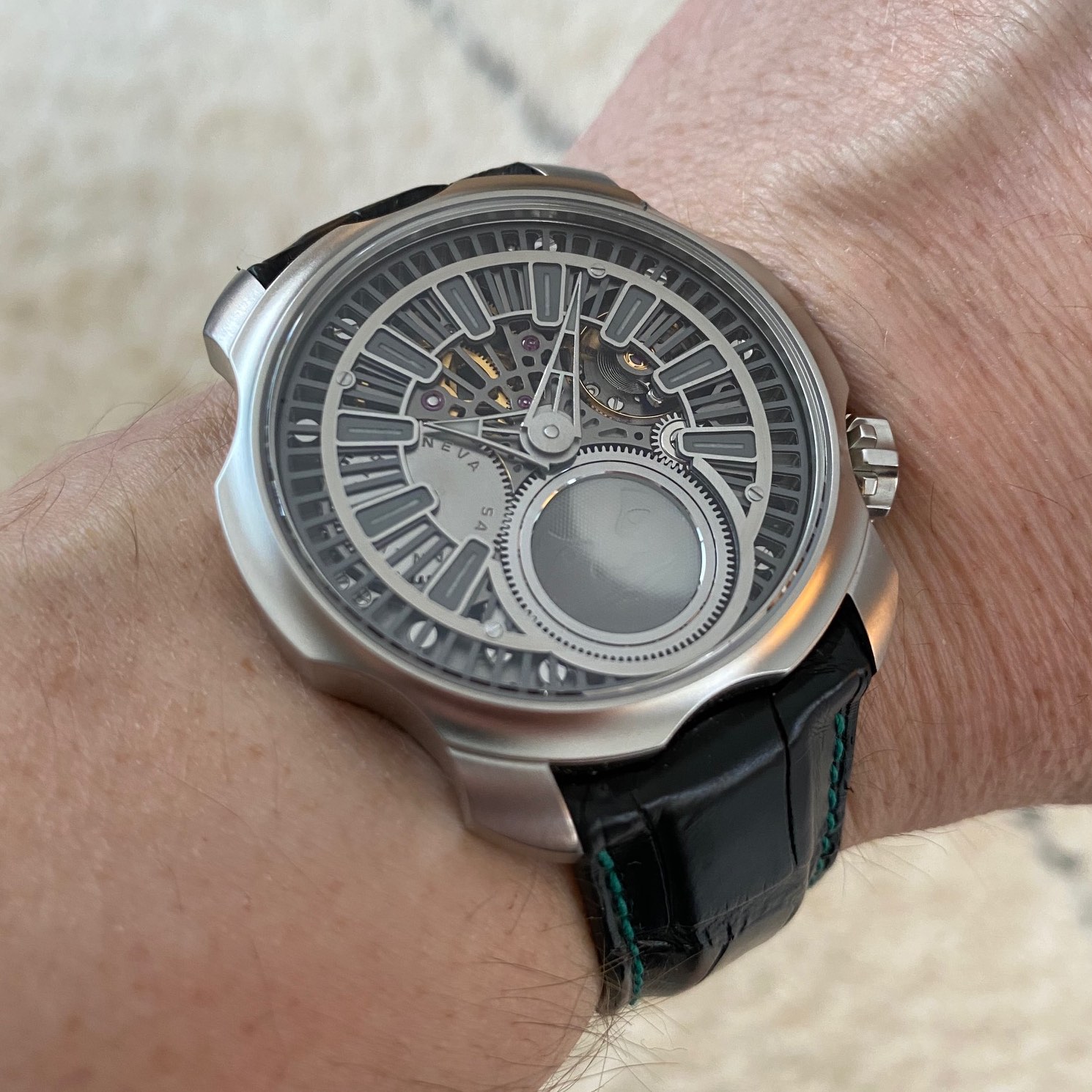 Business-wise, I should work on these faster but I just make these for people. I am not selling them to retailers. There has to be a customer. I try to keep the work that I do at a level that makes sense.

Last year, we made 25 watches for Sarpaneva and about 250 for S.U.F. It is a balance. The S.U.F watches give me the freedom to do what I want and to sell my watches to whom I want.

We have a special project coming, with positive vibes, feelings. It is a collaboration with another brand, not a watch brand. We’ll do a lot of things for that project in our workshop. I have sent one of my watchmakers to Switzerland to do a training course, to attend a Super-LumiNova course. We have bought the machine and can create our own lume here. It is going to be interesting…