Craftsmen like Vianney Halter are a rare breed. Vianney Halter made a name for himself on the independent watchmaking scene during the 1990s, with timepieces unlike anything else. Creation takes time, patience, and perseverance for this inspired, independent spirit… In 2013, the presentation of his Deep Space triple-axis Tourbillon put an end to a six-year creative pause. It took Vianney another 8 years to present his Deep Space Resonance. And the idea of creating a resonance, twin-balance regulator emerged in Halter’s mind 25 years ago when he started learning to play the piano.

Through resonance, a vibration in one object can cause an equal vibration in another, nearby object. For instance, strike a tuning fork, bring a second tuning fork next to it, and it will begin to vibrate in sympathy. Two oscillating bodies in close proximity influence each other and eventually synchronize. The Dutch scientist and mathematician Christiaan Huygens (1629-1695) foresaw that resonance could be applied to watchmaking following the observation of pendulums swinging from the same wooden beam. About a century later, Antide Janvier (1751-1835) created resonance clocks and Abraham-Louis Breguet (1747-1823) was the first to work on the application of the phenomenon into watches – hence with balance wheels and not pendulums… Since then, resonance fell almost completely into oblivion (for watchmakers) until the 1980s.

Credits where credit’s due, the modern history of resonance started in the 1980s with François-Paul Journe, who was directly inspired by the works of Breguet. The original dual movement of the Chronomètre à Résonance (the pictures above are early prototypes) was designed with two sets of independent barrels, gear trains and regulators. These are laid out independently and symmetrically. One of the two balance cocks swivels in order to finely adjust the distance between the two oscillators so that they will function “sympathetically” to achieve greater chronometric precision. Beat Haldimann (with clocks or his H2 Flying Resonance wristwatch) or Antoine Preziuso (with his TT3 TriTourbillon Resonance) followed suit with resonance timepieces. More recently, Armin Strom presented their Mirrored Force Resonance concept with a technical solution consisting of connecting twin oscillators by a steel coupling spring attached to their stud. 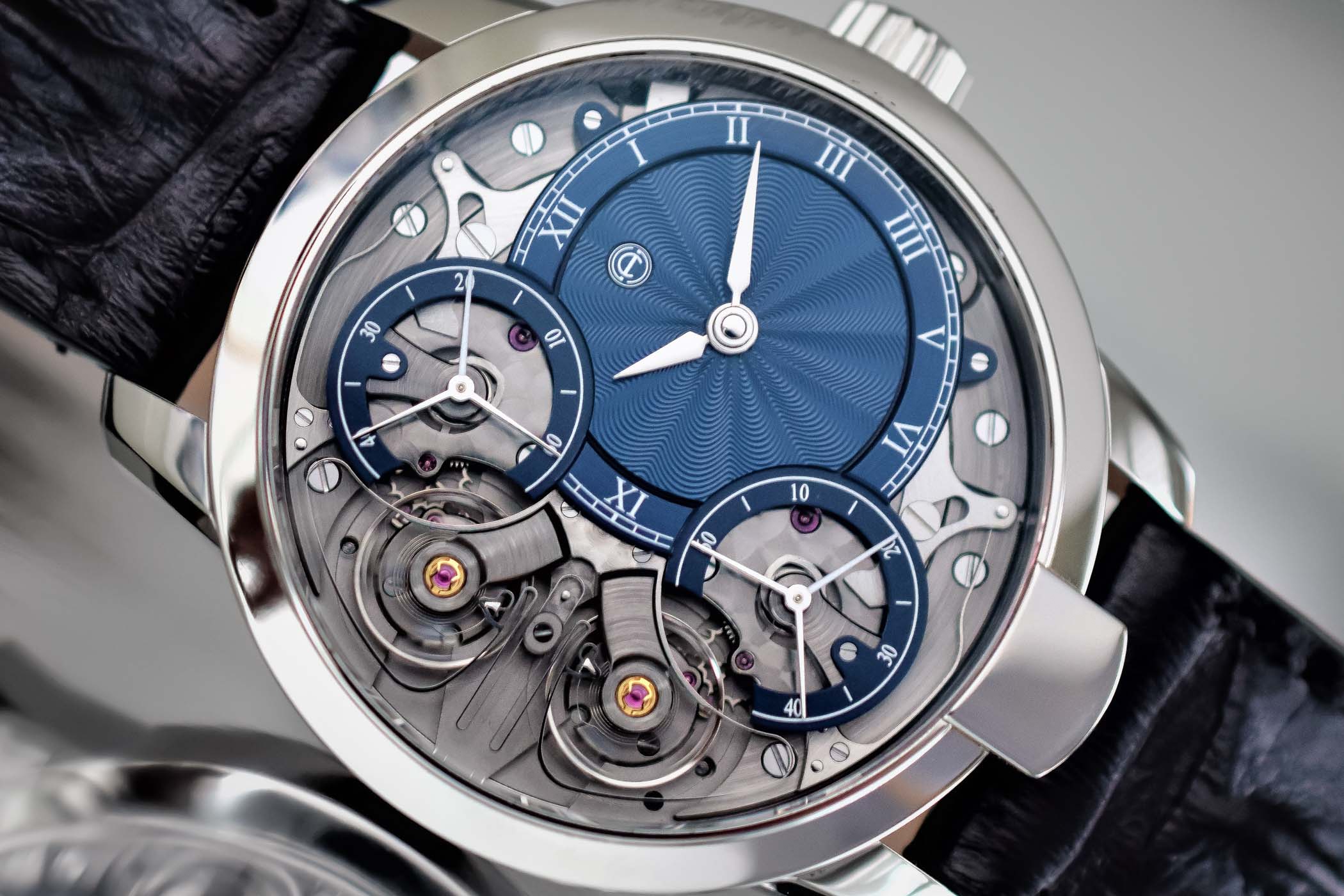 If you needed to be convinced that the interest of Vianney Halter in resonance is not recent, he founded in 1994 a company named Manufacture Janvier SA, named upon Antide Janvier who, among other creations, crafted double-pendulum resonance clocks. As you would imagine, Halter studied pre-existing resonance timepieces, in particular, the early 1800s blueprints of Abraham Louis Breguet’s attempts to achieve resonance. 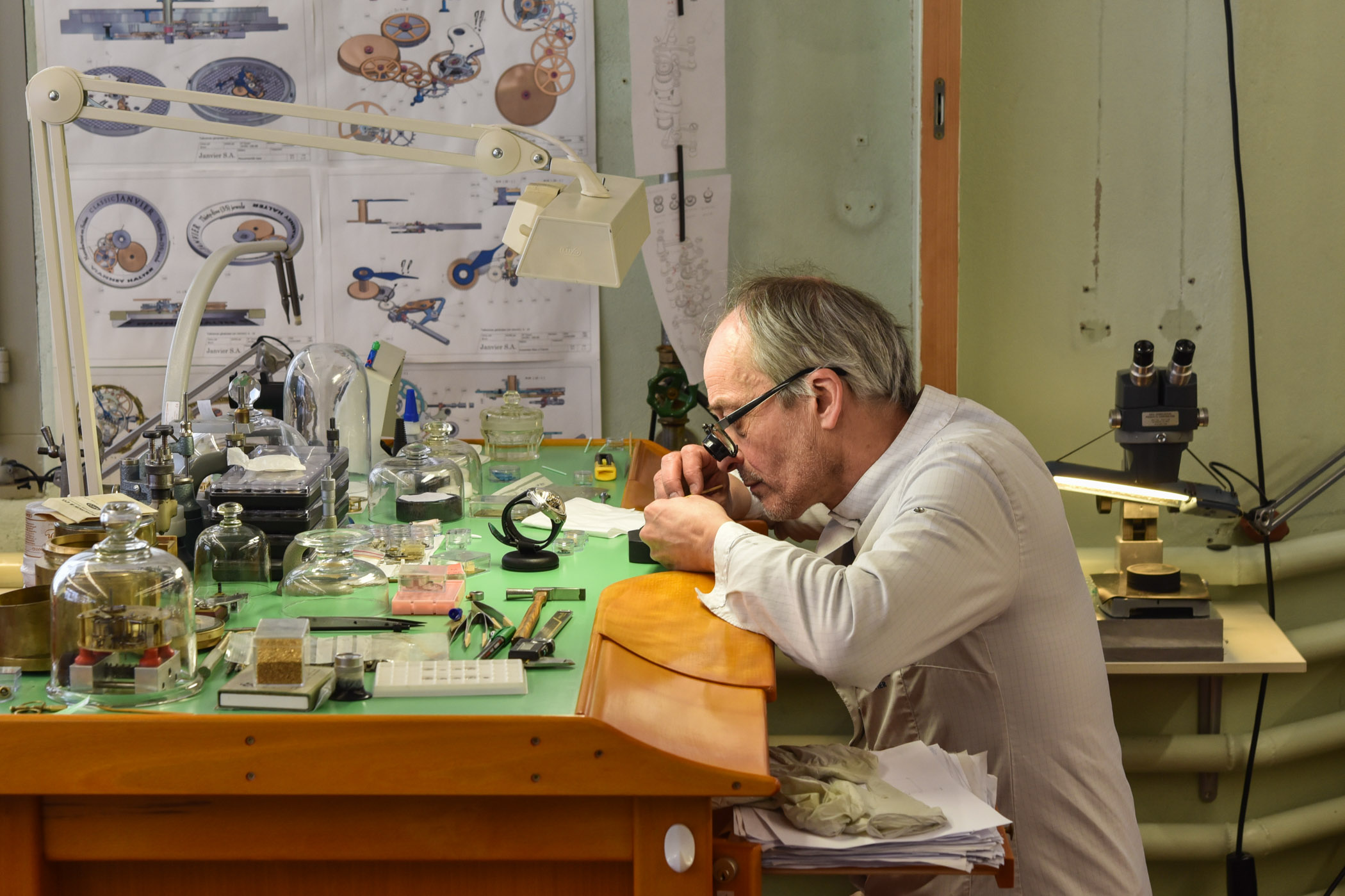 His research convinced him that using a linkage of some sort to transmit mechanical waves would be the optimal solution to enhance resonance (just like Armin Strom did). In this respect, Halter refers ecifically to acoustic resonance. Subsequently, his idea was to have both spirals attached to a common bridge. With it, the two oscillators could influence each other and attain resonance. Vianney Halter started to imagine a demonstration prototype that he built in 2007 using the parts from two identical Russian Deck clocks, connecting their oscillators with a solid bridge…

But in 2011, a new project and challenge emerged, as Vianney Halter was about to present the Deep Space Tourbillon (launched in 2013). As its name suggests, this watch was is true space-like watchmaking, with a mesmerizing triple-axis central Tourbillon literally floating under a high-dome sapphire crystal. The idea was to represent our world with the triple dimensions of space, plus, a fourth one, that of time. 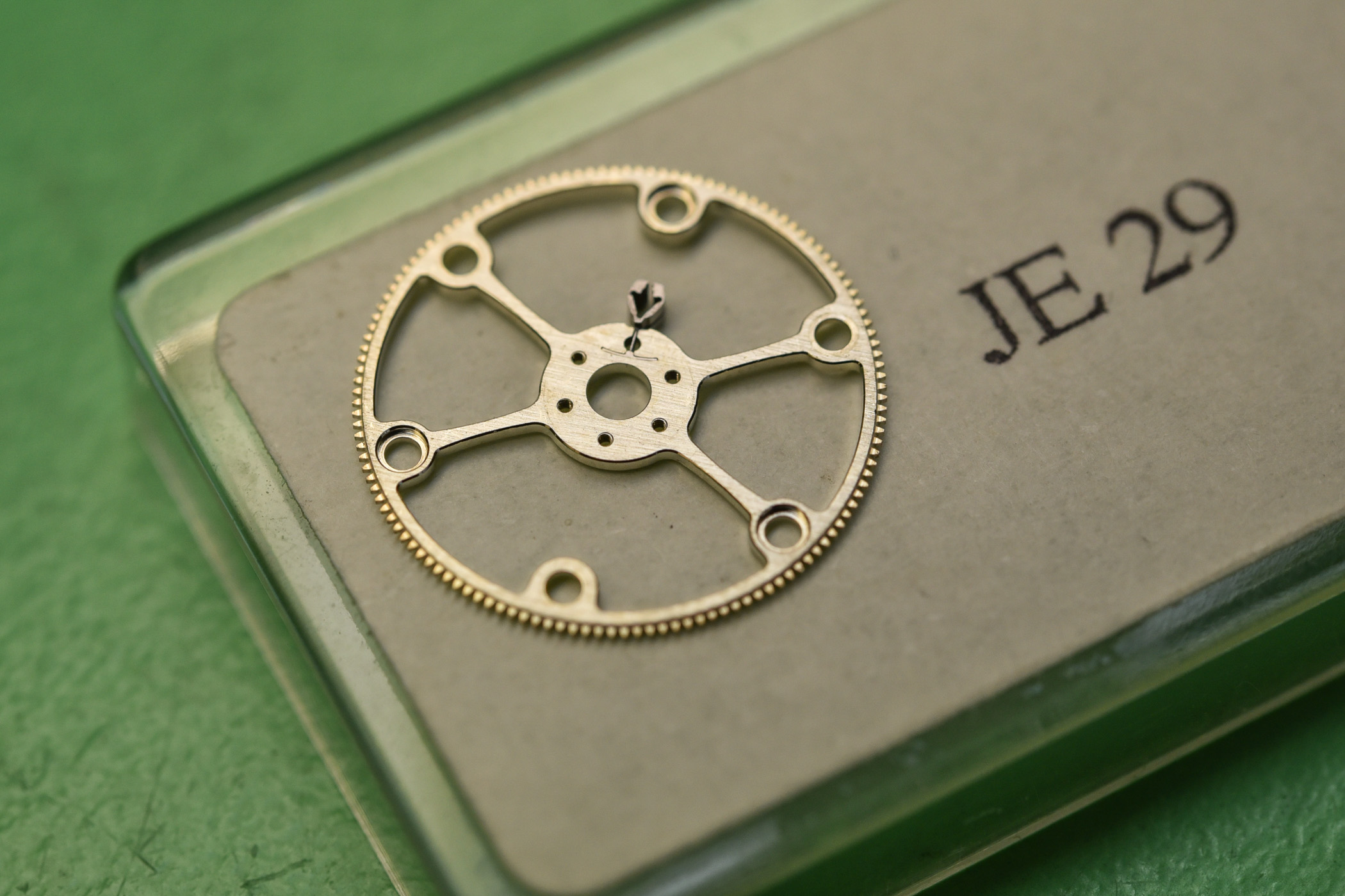 A prototype wheel showing how the hairsprings are attached to the same part to enhance resonance. This attachment gives enough freedom to the part to maximize resonance.

In 2019, the two balances of his resonance demonstrator were beating as one with a stable behavior. Vianney Halter envisioned the Deep Space Tourbillon as the host to transcend resonance. To maximize the phenomenon, the two hairsprings are fixed on either side of the same wheel inside the cage. These are pinned to the same stud holder (or rather to what is two-stud holder in one piece) that is attached to the wheel in a manner to transmit vibrations in an optimal way. In addition, both balance wheels are driven by the same barrel thanks to a differential gearing.

It took Vianney the entirety of 2020 to create the Deep Space Resonance Prototype. The architecture of the twin-balance, triple-axis tourbillon module is truly spectacular. Featuring 42 polished steel pillars (a nod to a 1939 marine chronometer by Achille Benoit), its structure relies on concentric cages. The innermost cage holds the balances and weighs 0.6 grams for 162 parts. This cage rotates inside the traverse in 60 seconds. The traverse weighs 2.8 grams and rotates around its horizontal axis in 6 minutes. The traverse is mounted in the cradle, which rotates on its vertical axis in 30 minutes. The whole system counts no fewer than 371 (superbly hand-finished) individual parts. Pure art. 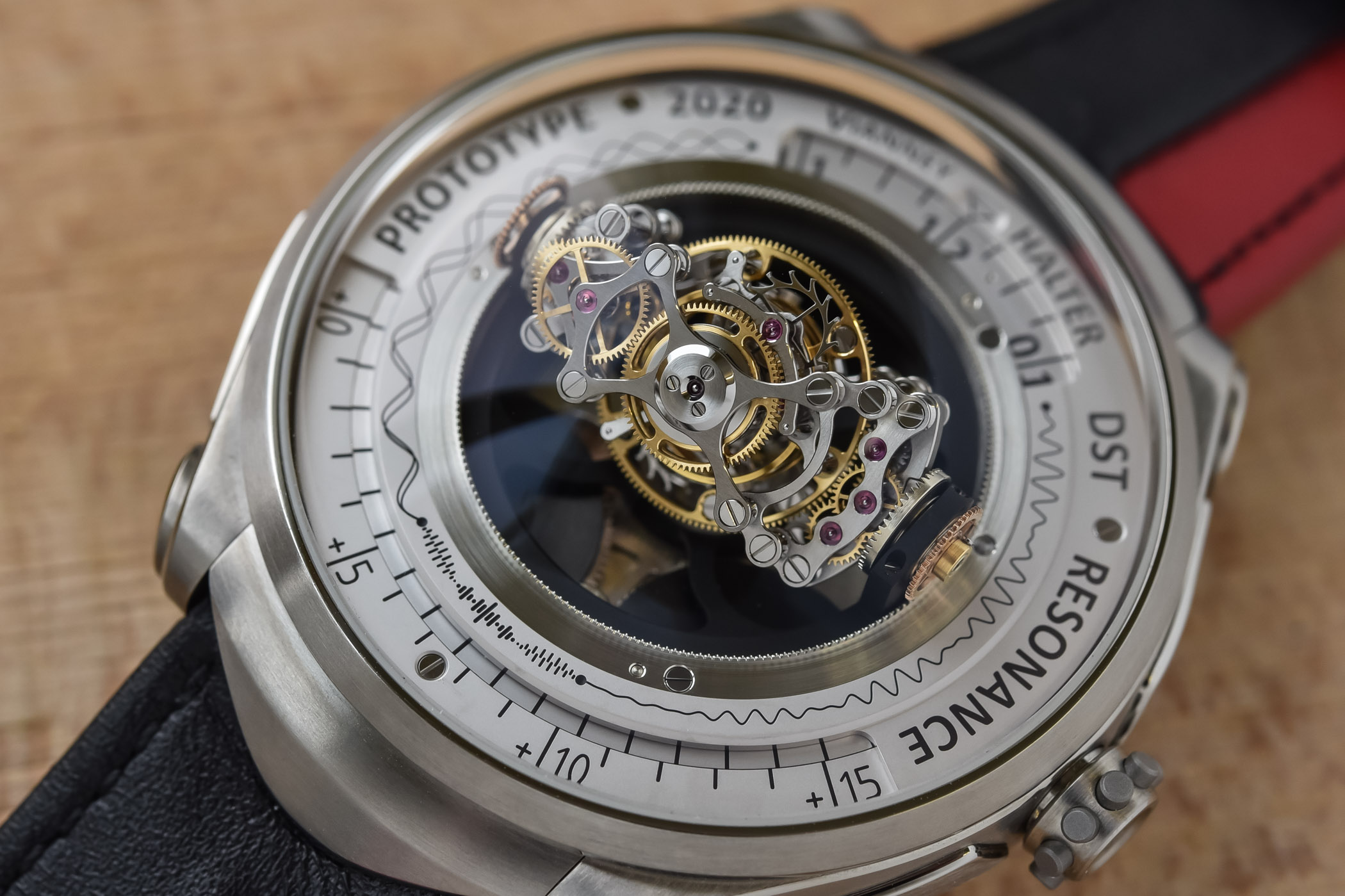 Interestingly Halter reports that the balances synchronize and oscillate at the same time, but not necessarily in the same direction. The ‘resonance mode’ depends on the position of the balances before they start beating and it is kept until the end of the power reserve. The next time the watch is wound, the balance may beat in a different mode. The balances beat at 21,600 vibrations per hour, with 65 hours of power reserve on one barrel – at least for the prototype but this could be seriously beefed up for the production pieces. 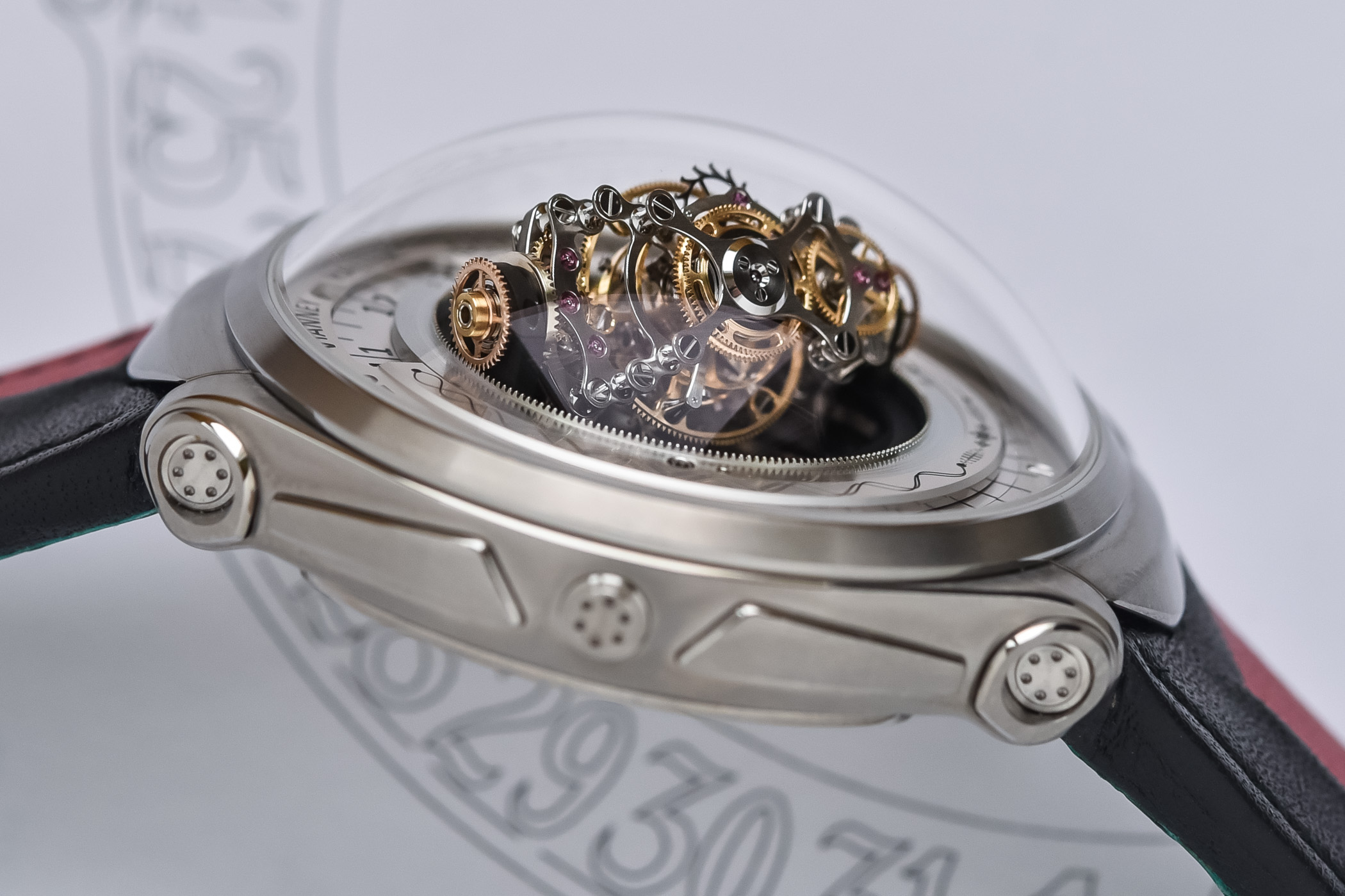 The original time display was directly inspired by the Vernier caliper. The hours and quarters can be read in the top aperture. At the bottom aperture, one can read the supplemental minutes by finding where the marks match the best.

This fascinating mechanical micro-cosmos is housed in a 46mm case under an impressive 10mm-high domed sapphire crystal. Fashioned out of titanium for the prototype, its sci-fi inspired design is similar to that of the Deep Space Tourbillon with distinctive details such as the signature Vianney Halter crenelated crown or unique lugs. Overall, the watch is 50mm x 52mm x 20mm, the exact same dimensions as the Deep Space Tourbillon. On the wrist, it wears actually smaller than what I expected. Last, the caseback of the prototype does not feature specific engravings as it can be personalized by the future owner. 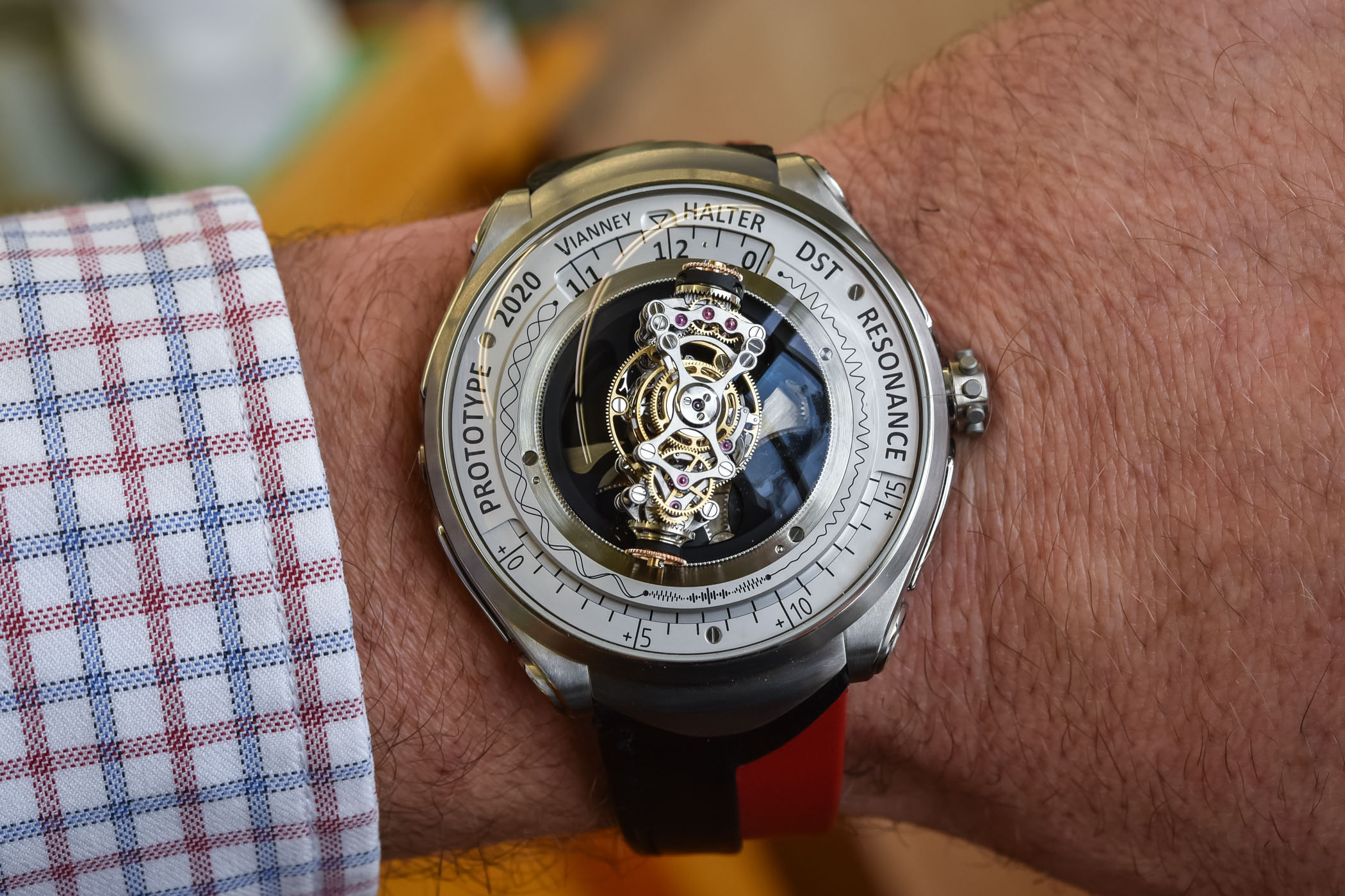 The Vianney Halter Deep Space Resonance Triple Axis Tourbillon is now available for pre-order with a lead time for delivery of about 6 months. Price is set at CHF 860,000. This will be probably out of reach for most… but what a fascinating watch! 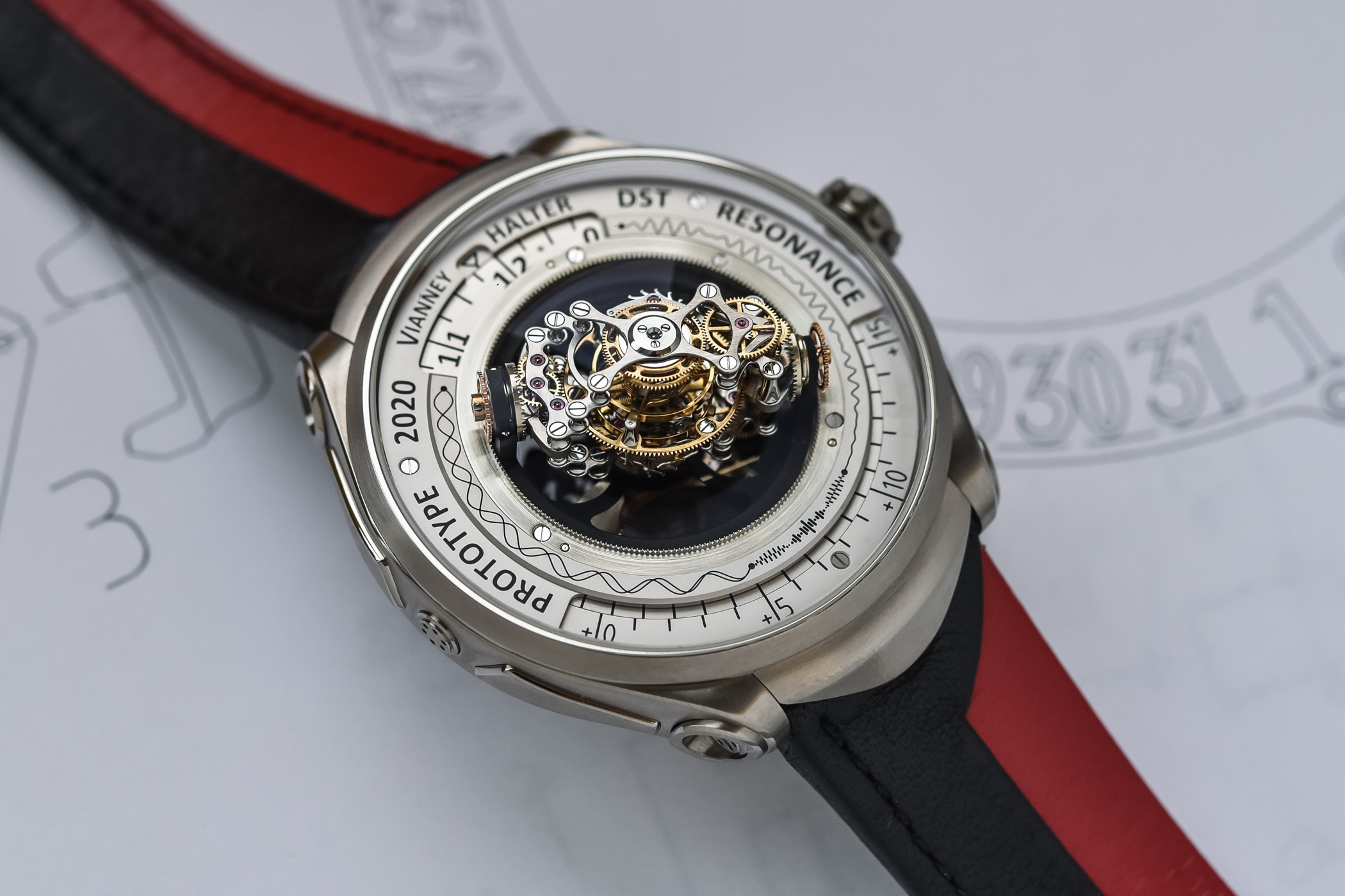