Take my breath away

The United States Navy Fighter Tactics Instructor program, popularly known as TOP GUN, is where fighter and strike techniques are taught to the Tom Cruises of the real world. As a brand with a genuine link to pilot’s watches since 1936 with the release of the “Special Pilot’s Watch,” followed in 1940 by the iconic Big Pilot’s Watch 52 T.S.C., IWC and cockpit watches go hand in hand.

Introduced in 2007 with the Pilot’s Watch Double Chronograph Edition Top Gun IW379901, and then moved to a dedicated sub-collection in 2012 with for instance the Big Pilot Black Ceramic IW501901, the TOP GUN series relies on high-tech materials (classic ceramic but also for a couple of year Ceratanium) and military stealth technology styling. It is the most contemporary of all the pilot’s watches at IWC.

In a departure from its standard black ceramic cases, the latest model relies on a colour combination that is very similar to the camouflage battle dress used by the military in desert warfare. During Operation Desert Storm, US Armed Forces relied on arid-environment camouflage with a mottled colour combination that is echoed on to the Big Pilot TOP GUN watch we have here.

There is not a trace of nostalgia on the TOP GUN models, which eschew the vintage appeal of a Spitfire model and stick to their guns as action-ready watches resilient enough to handle just about any foe. In this case, the foes are rugged environments, extreme temperatures, magnetic fields and the odd roadrunner or giant desert hairy scorpion that frequent the driest desert in North America.

The first watch in a sand-coloured ceramic case was the 2019 Pilot’s Watch Chronograph TOP GUN Edition Mojave Edition (Ref. IW389103). I apologise for the lengthy name, but there is a fundamental difference between this first model and the latest ceramic editions: it was not a Big Pilot Watch and only measured 44.5mm across. MONOCHROME was impressed and covered this watch with a hands-on and an opinion article. 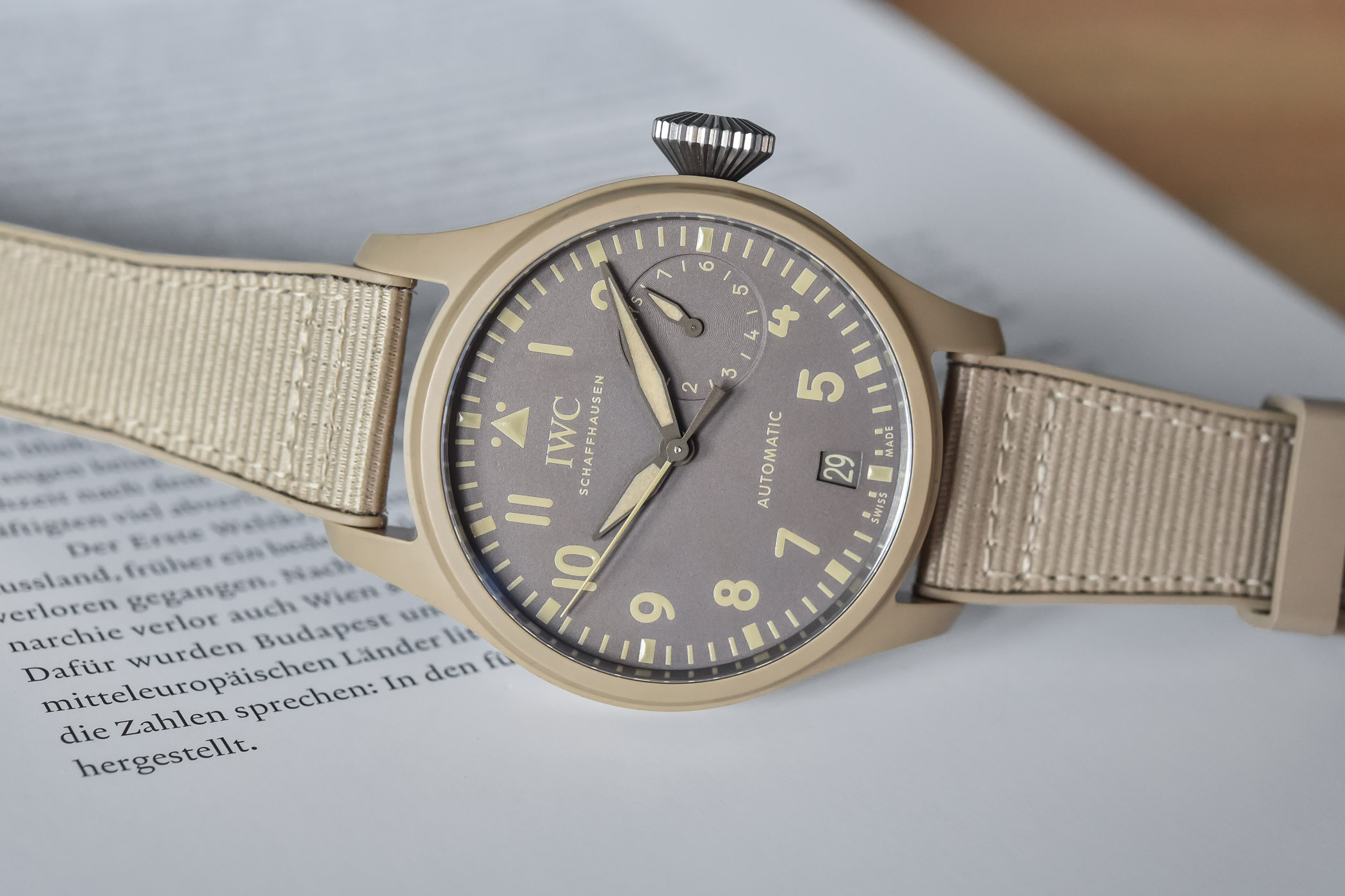 The colour of the matte ceramic case, aptly described as ‘sandy’, is inspired by the famous American desert, which, you won’t be surprised to learn, is also home to the China Lake Naval Air Weapons Station. Located in the Mojave Desert 150 miles north of Los Angeles, the station is “where the Navy and Marine Corps have developed or tested every significant airborne weapon system in the past five decades.” (source military.com) 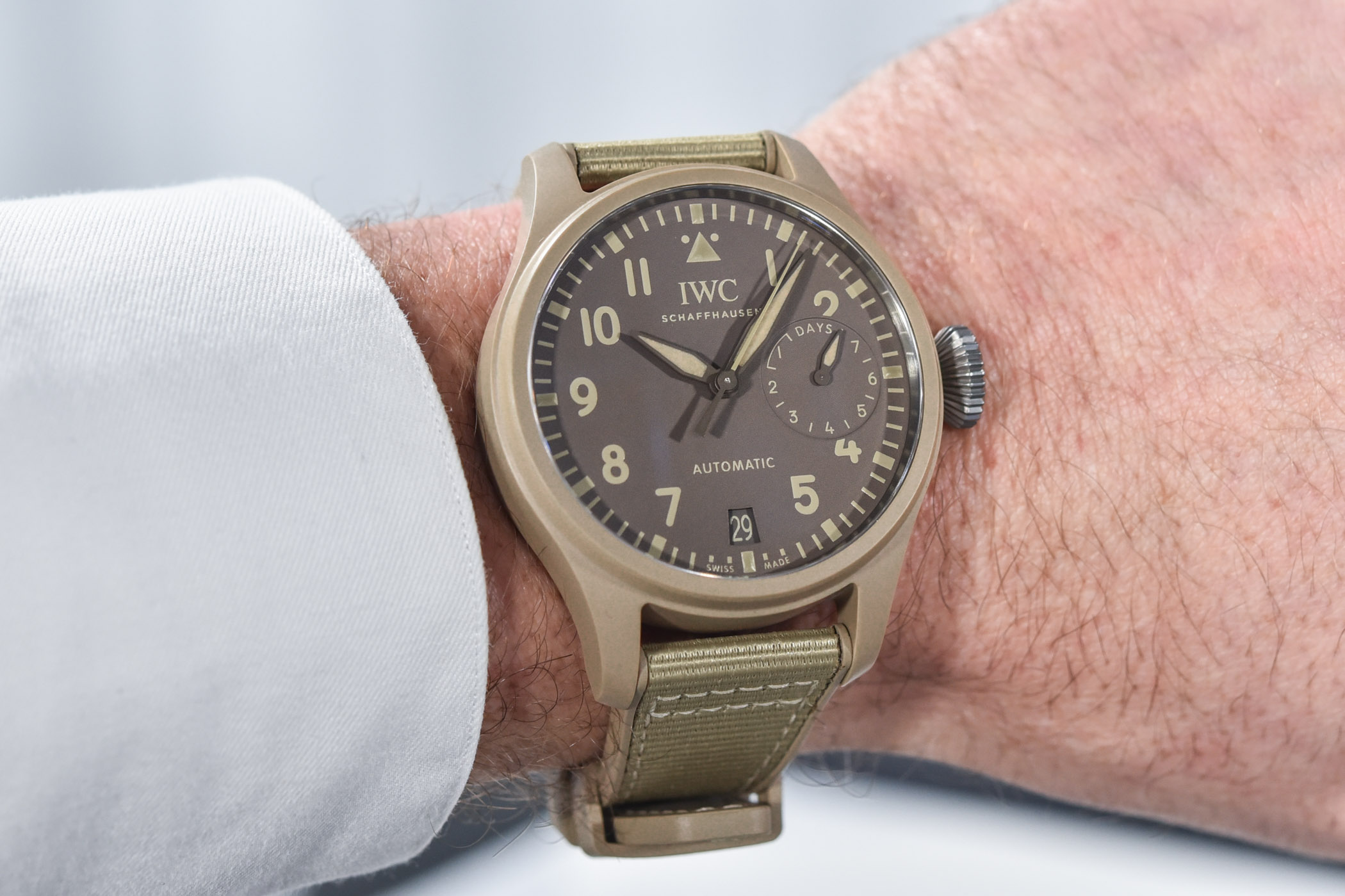 The alchemy behind the resilient ceramic involves combining polycrystalline powders mixed with top-secret “auxiliary materials” that are shaped and sintered in a furnace at scorching temperatures. Its Vickers rating is second only to that of diamonds, and this particular breed of ceramic is known as “engineering” ceramic. The sandy colour is obtained by mixing zirconium oxide with other metallic oxides. If you are curious about how IWC got into ceramics, read on.

IWC was a precursor in the world of ceramic watch cases and produced Switzerland’s first ceramic perpetual calendar watch, the Da Vinci Perpetual Calendar (Ref. 3755) in 1986 (the same year Rado unveiled the Integral, its first high-tech ceramic quartz watch). Without delving into the ingenious perpetual calendar module controlled via the crown dreamed up by Kurt Klaus for IWC’s Da Vinci, the idea of using ceramic for the case was actually born from a shortage.

As Wei Koh recounts in his article published in Revolution in 2018, IWC was not expecting its Da Vinci Perpetual calendar to become such a resounding success: “Amusingly because they were only expecting an order of 10 to 15 watches rather than the hundreds of orders they received IWC realised they had ordered inadequate gold for the cases. So instead of stamping and machining the cases, which creates large amounts of waste, they pioneered the technology to cast them in gold. This process gave them the idea for another technical breakthrough.”

Inspired by casting the gold, IWC decided to experiment with zirconium oxide ceramic. As Koh explains: “To achieve this IWC had to pioneer the technology for molding and then machining these cases to the right specifications. The resulting watches with both ground breaking movements and ground breaking case technology are some of the most distinct, historically significant and collectable watches in modern history.”

Notoriously complicated to produce, high-tech or technical ceramic is one of the hardest substances on Earth. The properties of high-tech ceramic are quite extraordinary and many brands have developed their own proprietary mixes (IWC also has its very own ceramized titanium known as Ceratanium). Harder than steel, scratch-resistant, lightweight, skin-friendly, fade-resistant, available in multiple colours, the only real disadvantage of ceramic cases is that they are somewhat brittle and if you were to drop your watch from the a great height, it could shatter.

Like my colleagues, when I saw the first photographs of the IW506003, I thought it looked like a plastic Swatch case. However, this impression was dispelled as soon as I handled the watch. There is nothing plasticky at all about the 46mm case (height 14.6mm). There is no getting around the fact that the watch is BIG, but it is a Big Pilot, so the size shouldn’t come as a shock. Being ceramic, it is lightweight but definitely not flimsy, and the smooth, silky tactile sensation of matte ceramic is unbeatable. At first, the material feels cold to the touch but not as cold as metal. The caseback is made from titanium like the XXL conical crown, and both are screwed-down to ensure the 60m water-resistance. The layout of the dial and the functions of the watch are identical to the classic Big Pilot’s Watch (ref. IW501001) launched in 2016 with a date window at 6 and a power reserve indicator at 3 o’clock. The tricky part here is describing the colour of the dial. Some say it is brown, some say it is a dark sandy colour, others say it is taupe. I’m going to go with ‘matte desert rat’ as my colour of choice in honour of the 7th Armoured Division of the British Army that fought in North Africa. Whichever colour convinces you, rest assured that it is the perfect match for the sandy case. 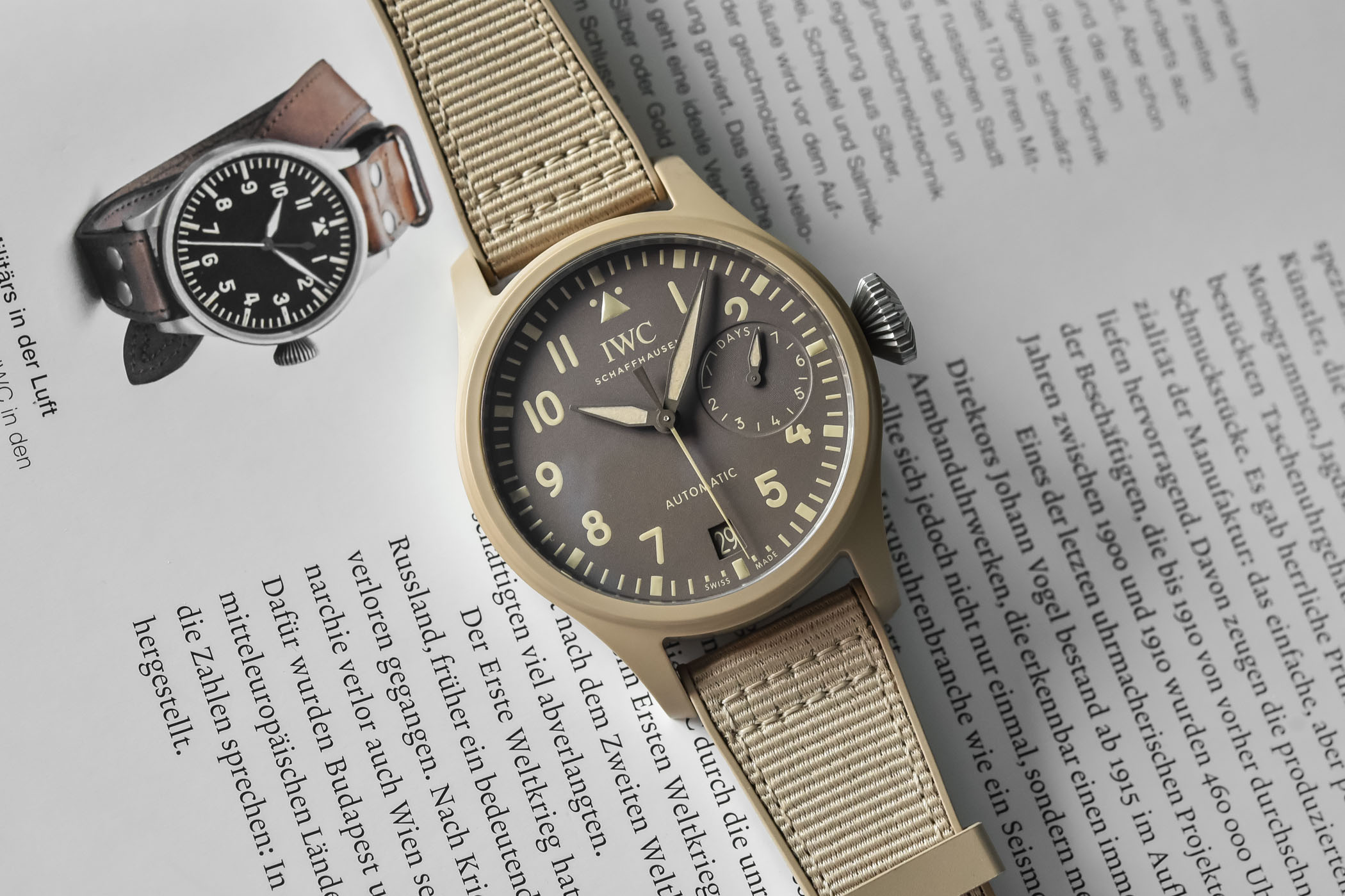 The Arabic numerals, the minutes/seconds track, the indices, the hands, and the iconic triangular index surmounted by two dots at 12 are all sand coloured, and the hands and indices are picked out in sandy-coloured lume matching the ceramic case. If you look closely, you can see how the lume inside the hands is slightly gritty to mimic the texture of sand, and the power reserve counter is discreetly picked out with a snailed decoration. Thankfully, the background colour and numerals in the date window match the dial. The strap is also a winner with its sand-coloured rubber structure and sandy textile inlay. Overall, the watch transmits a virile, military vibe that could appeal to anybody old enough to remember G.I. Joe. Typically a “hate or love” kind of watch, but that’s all fine!

As we mentioned, the watch is essentially a remake of the 2016 Big Pilot’s Watch (Ref. IW501001) with the same proportions, dial layout and functions, and also the same movement. The IWC calibre 52110 belongs to the 52000 series launched in 2015, the brand’s latest-generation, in-house 7-day automatic movements. With an upgraded bidirectional Pellaton winding system, an increased frequency of 4Hz and two barrels, the 52110 is used in Big Pilot’s models with central seconds, date and power reserve indicator. A soft-iron inner case protects the movement from magnetic fields.