In-Depth – The Horage Tourbillon 1, A Sub-10k Swiss In-House Tourbillon… And How They Did It!

The tourbillon… You’ve no doubt heard of it (you are a MONOCHROME reader after all) and perhaps you own a few, but why is it such an expensive feature? French for whirlwind, it’s actually among the oldest of technical innovations, patented by Breguet in 1801 – although developed several years earlier, around 1795. It’s simple in concept with the balance wheel and escapement mounted inside a rotating cage to counter the forces of gravity. If you’re in the market for a Swiss tourbillon (or any outside of the Asian market), you’re well into five figures… until now. We introduced the accessible Horage Tourbillon 1 last year during development and now have one on the wrist for a proper review. And to understand how the brand managed to make this watch, at that price. 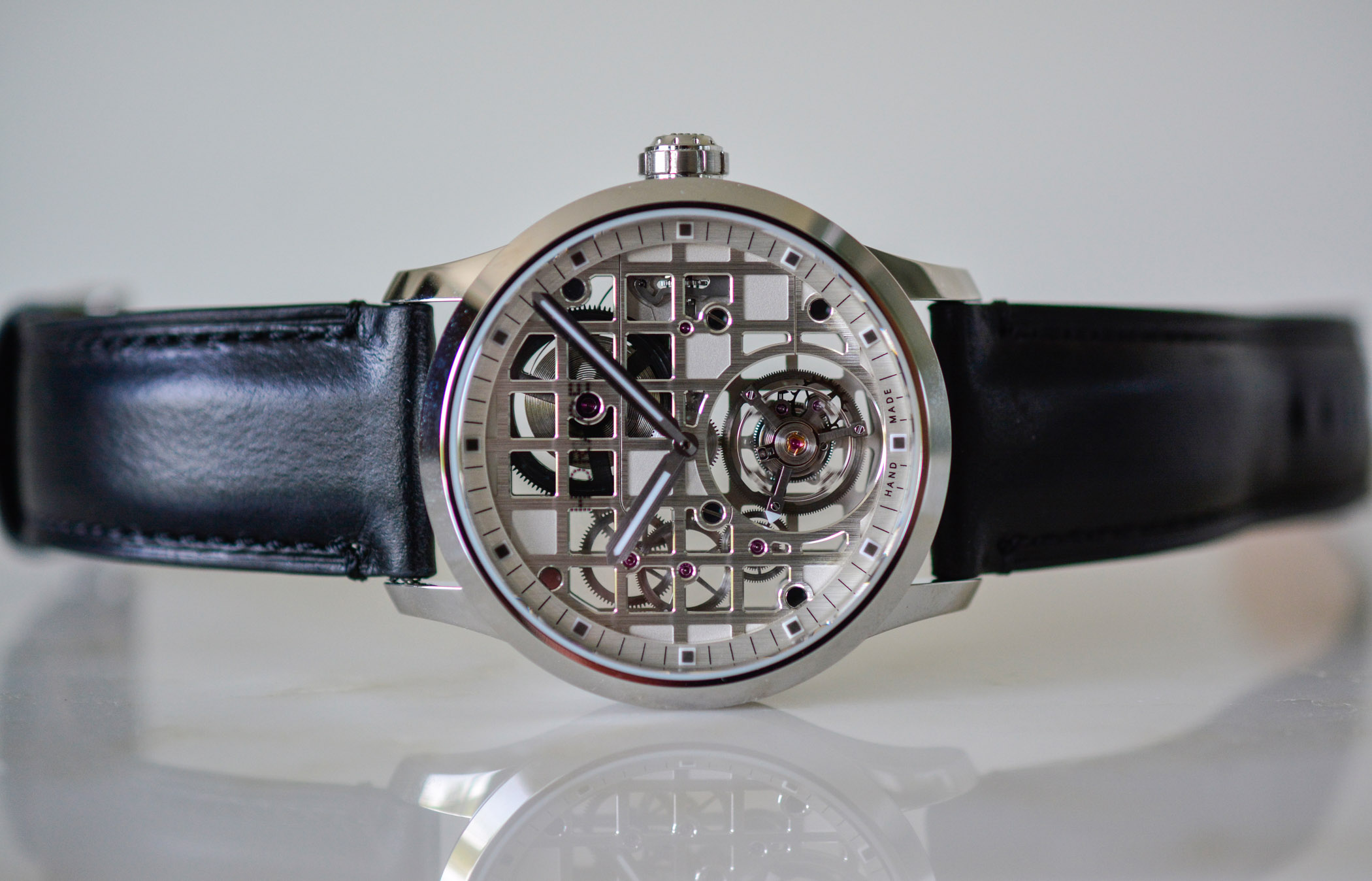 Horage is a relatively newcomer to Swiss watchmaking, originating in 2007 when husband and wife founders Andreas Felsl and Tzuyu Huang began discussing their future in Biel/Bienne. Horage (the H is silent) is derived from two words – HORA is Latin for hour and AGE references time, either the past, present or future. In 2008, the first Horage watch, Omnium, entered the design phase and was presented at Baselworld 2009. It had an outsourced movement, but the decision was soon made for Horage to become a vertically integrated manufacture and everything was put on hold. 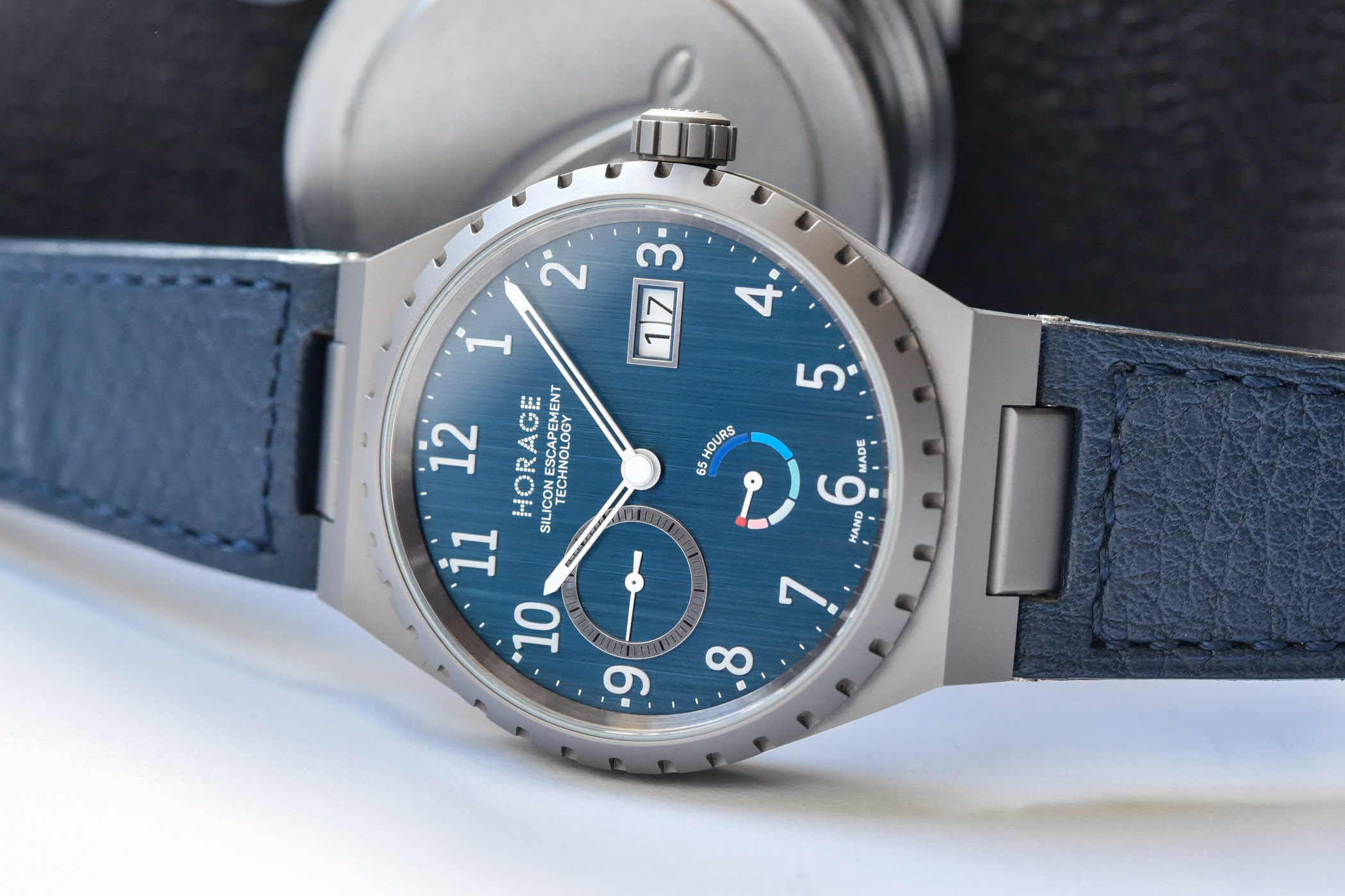 The first in-house K1 automatic calibre entered years of development and the second watch debuted in 2015. Known as “Jonas-K1,” it was named after watchmaker/engineer Jonas Nydegger who was key to the K1’s development. The movement had a modular design and additional complications like a power reserve and big date appeared on later models. The original Omnium was also retrofitted with the K1. Horage quickly matured and the K1 is now in its tenth version, and development of the modular K2 micro-rotor automatic is almost complete, bringing 38 possible variants. The third and arguably most dynamic movement development is the tourbillon.

WHAT A DIFFERENCE A YEAR CAN MAKE

Things have definitely changed in the year since we introduced the Tourbillon 1. The movement was to be produced by a manufacturer in La Chaux-de-Fonds with Horage’s silicon escapement architecture and other improvements, but the partnership ultimately fell through. This was after prototypes were assembled and preorders placed, putting this small brand in a very difficult situation. Instead of throwing in the towel and offering refunds, Horage announced a moonshot. In the heart of the worst pandemic in a century, a handful of engineers would design and build a ground-up tourbillon movement and deliver to customers within a year. And despite the internal costs of such a spontaneous endeavour, prices would remain the same. Those prices are also unprecedented, starting at just under CHF 7,000 for early preorders. 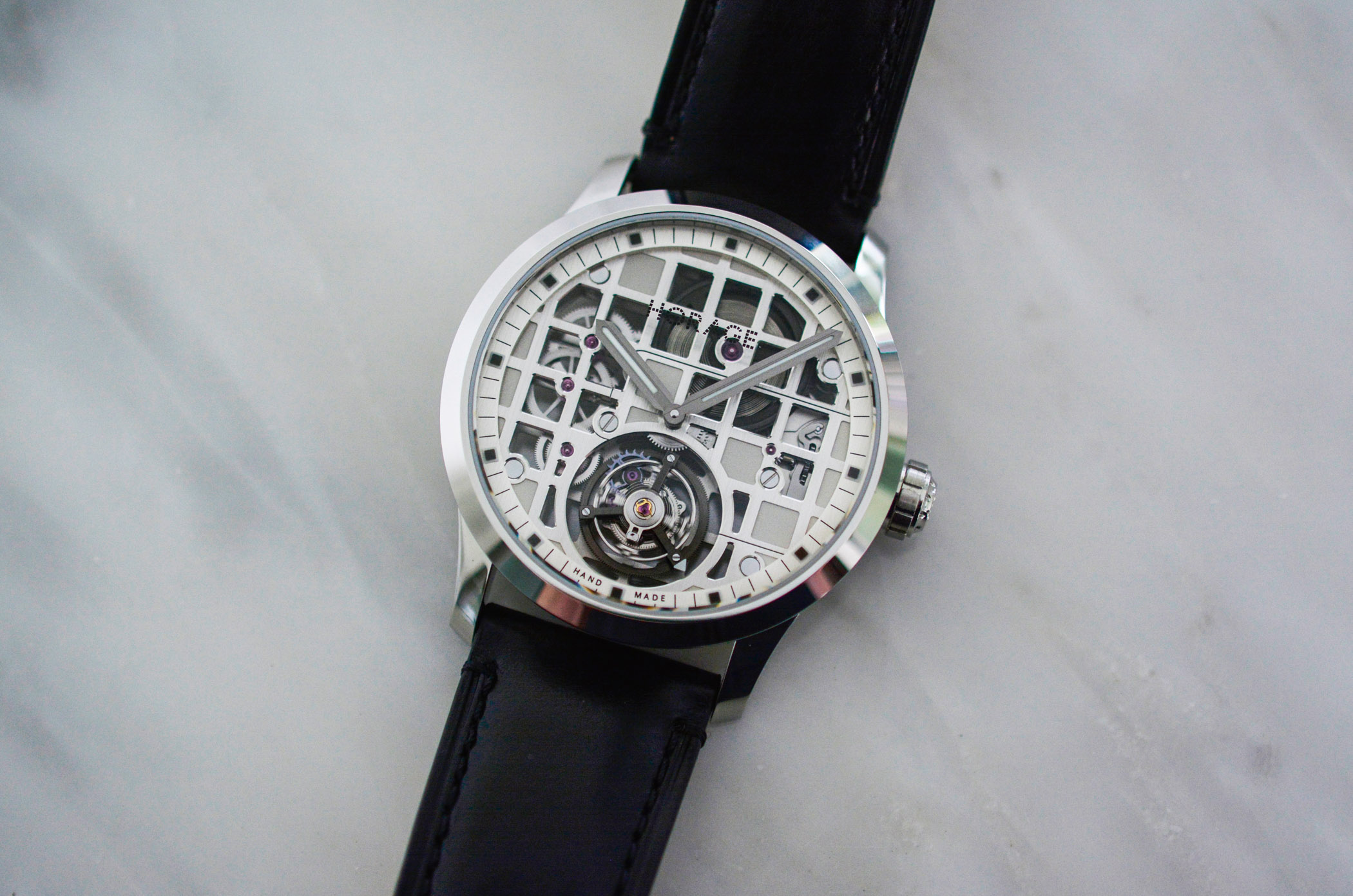 For context, the second least expensive in-house Swiss tourbillon – Tag Heuer’s Carrera Heuer-02T Tourbillon – was more than double the price in 2016 at CHF 15,000. At the time, it was considered unbelievably affordable to the point of being controversial. How has Horage pulled this off? Well, within its own version of Skunk Works in Biel/Bienne, the team leveraged nearly 12 years of K-series experience and made it happen. I’m not sure if a little sorcery was at play, but with a titanium cage, in-house silicon escapement, COSC accuracy and five-day power reserve, corners certainly weren’t cut. In fact, the specifications surpass the original design and prototypes. Perplexing? More on this later.

Let’s look closer at the movement. It’s an in-house, hand-wound calibre with a full five-day power reserve, up from three days with the initial design. That’s indicative of a theme here – efficiency. The brand designed a silicon escapement that’s 55% more efficient than traditional Swiss counterparts. The flying tourbillon cage is also made from lightweight titanium, adding to overall efficiency. The 43-piece cage weighs only 0.29 grams with a low profile of 3.9mm. It forgoes a pinion and jewel design for a more stable ball bearing construction, bringing a low centre of gravity and much-improved shock resistance for everyday wear (tourbillons can be notoriously fragile).

It’s a time-only movement and the 60-second tourbillon has a triangular marker acting as the seconds hand. The 19-jewel calibre has been reduced from 4Hz to 3.5Hz (25,200vph) as it’s now based on the K-series architecture but remains within COSC specifications at -4/+6 seconds per day. An official COSC certification is also available for CHF 300. Sound impressive? Well, there’s more. The watches are fairly customizable, starting with the movement/dial grid colours (movement and grids are integrated). We have the silver movement on hand, but there’s also a darker grey, gold, blue and grey/blue combination. It’s mostly skeletonized front and back, and definitely unique. 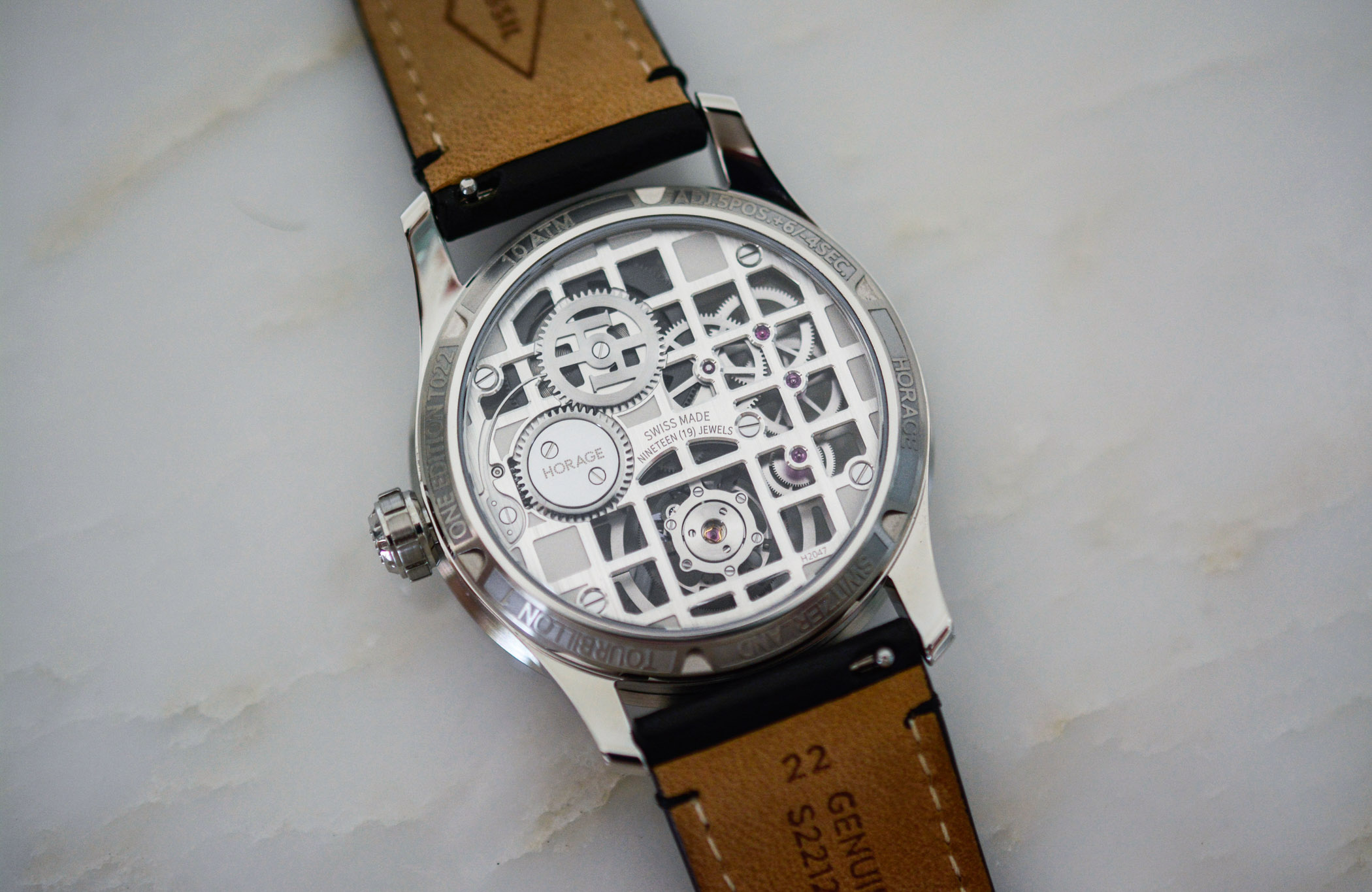 Customization doesn’t stop at the movement colours. The case comes in two metals and two finishes for four variants. There’s 904L stainless steel, a more corrosion-resistant type preferred by Rolex, and 18k gold, both either polished or brushed. The dimensions are 41mm in diameter and 11.8mm in height (lug-to-lug 47.8mm). It’s a bit larger than your average dress watch, but very wearable and hits that contemporary sweet spot. In my opinion, this is a watch for most occasions. I’d avoid sports or other rigorous activities, although the brand told me that a customer wore one during a Half Ironman. 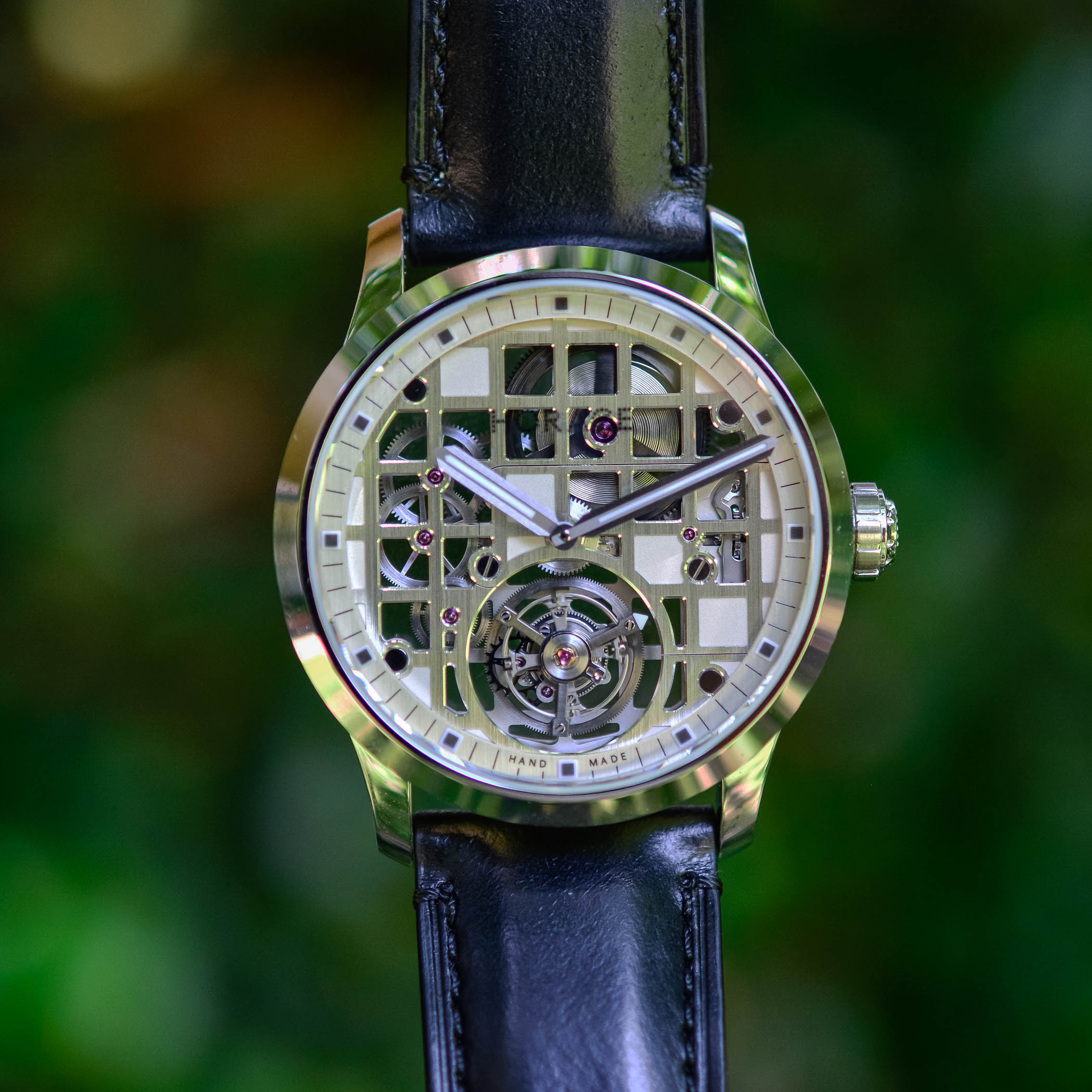 Water-resistance is rated at 100 metres, so it’s also safe for swimming. The crown is a push/pull affair with a smooth, very satisfying action that’s not jarring like many. Sapphire crystals are front and back with multiple anti-reflective coatings on the domed front. Horage is printed on the underside of the front crystal for modern, subtle branding. Lug width is 22mm and strap options abound. There are eight to choose from with seven leather – dark blue, British racing green, russet, brown, white and two textures of black – and a non-leather allure blue. All come with quick-release levers and a steel deployment buckle.

Although mostly openworked, there are still distinct dial elements that play to the brand’s style. There’s a grid with open “windows” exposing the mechanics or recessed, bead-blasted squares. This unique aesthetic is inspired by the brand’s logo. Interestingly, the grid continues on the back and the consistency really works. On the grey/blue colour combination, the back grid is blue and the front grey with blue exposed under the tourbillon. It’s arguably the most interesting of the designs. All edges are machined at a 30-degree angle and polished, while the grid itself is hand-brushed. The flying tourbillon sits in a 14mm aperture at 6 o’clock, while the mainspring is clearly visible just off-centre at 12 o’clock. 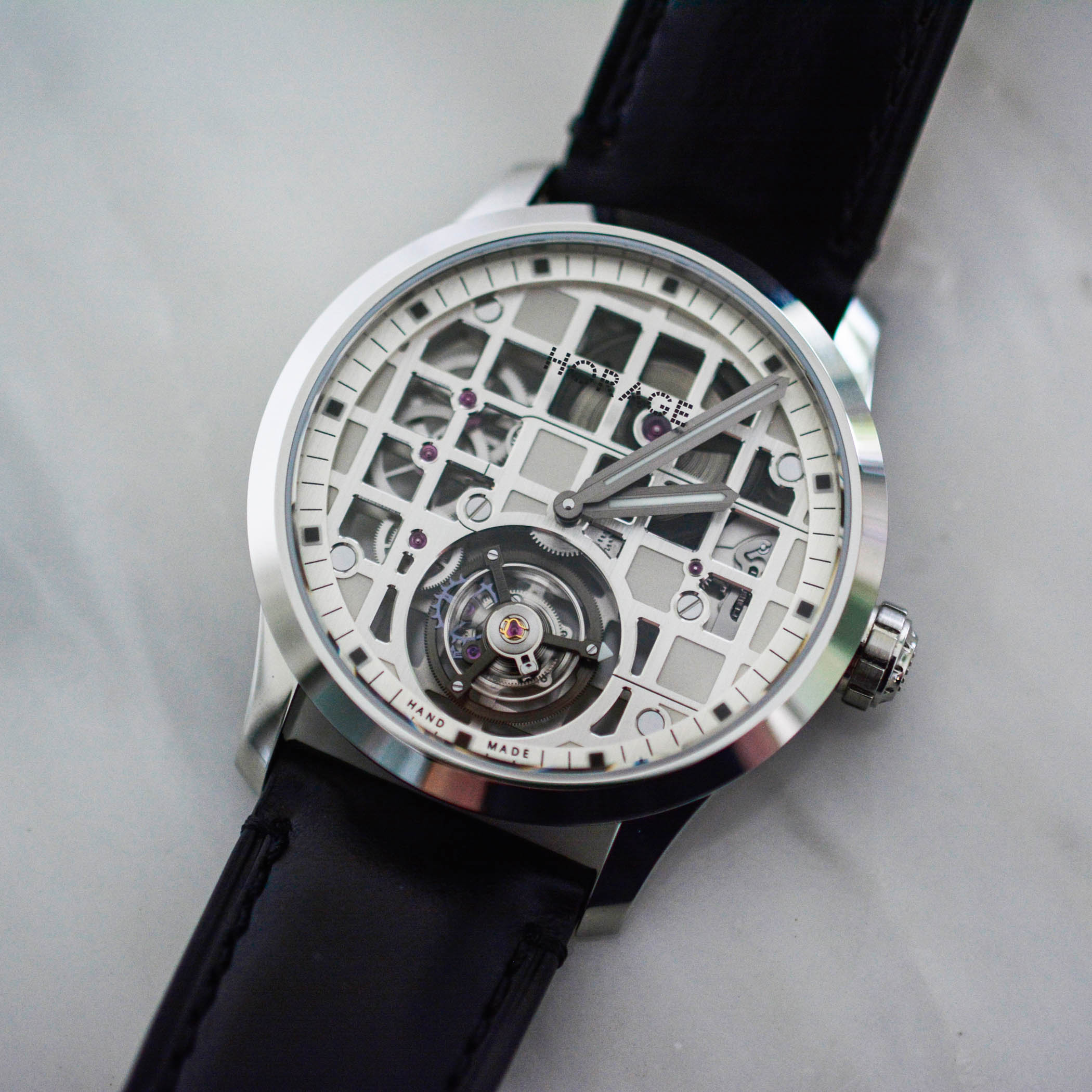 A series of gears adorn the left side and the right is a bit less mechanical, but the overall design remains balanced. Sword-style hour and minute hands have lume inserts, along with the triangular seconds mark on the tourbillon cage. The aforementioned grey/blue dial combination brings a set of blue hands, while the others are silver or grey. Those that upgrade to the gold case will receive gold hands. A raised minute track circles the outermost perimeter with square, lume-filled applied indices. Turn the watch over and you’re met with a series of gears and jewels, seamlessly integrated with the rear grid. In the centre, you’ll see Swiss Made engraved, while “Hand-Made” is printed at the bottom of the front dial. Just a bit of humour from the brand (and I like it). 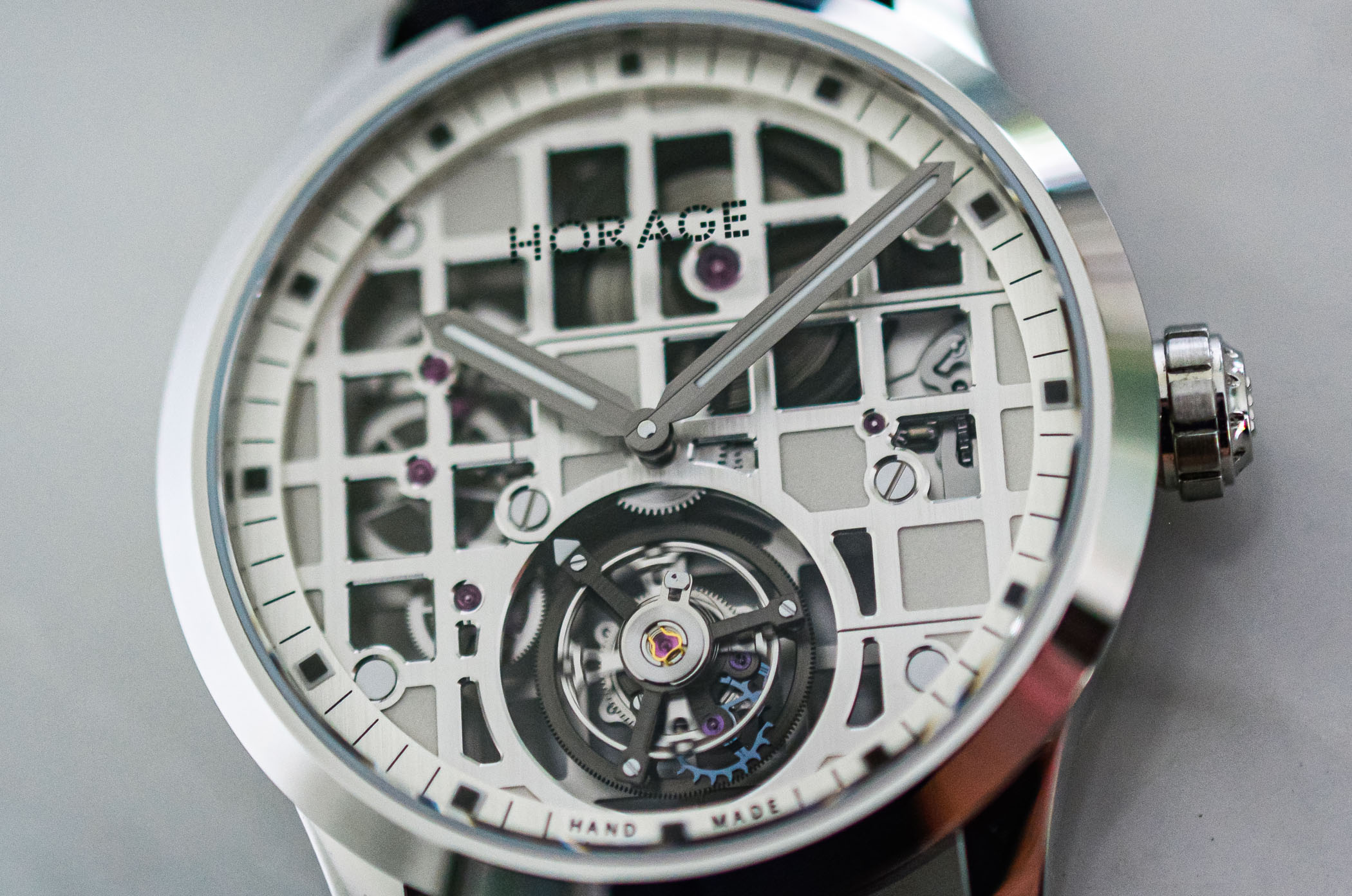 How is this in-house Swiss tourbillon priced under CHF 10,000? There are several factors, starting with the fact that Horage is a small, independent brand without the influence of parent companies. The team is comprised of expert Swiss watchmakers with former leading roles at ETA, Vaucher and Eterna, and the K1-series helped perfect design and production methods. Perhaps most important, Horage has mastered in-house design and production of escapements, which is rare in the industry and vital to tourbillon development. This doesn’t answer everything and I honestly can’t fill in all of the blanks. In my years as a watch enthusiast and professionally covering the industry, I’ve never seen such a story. 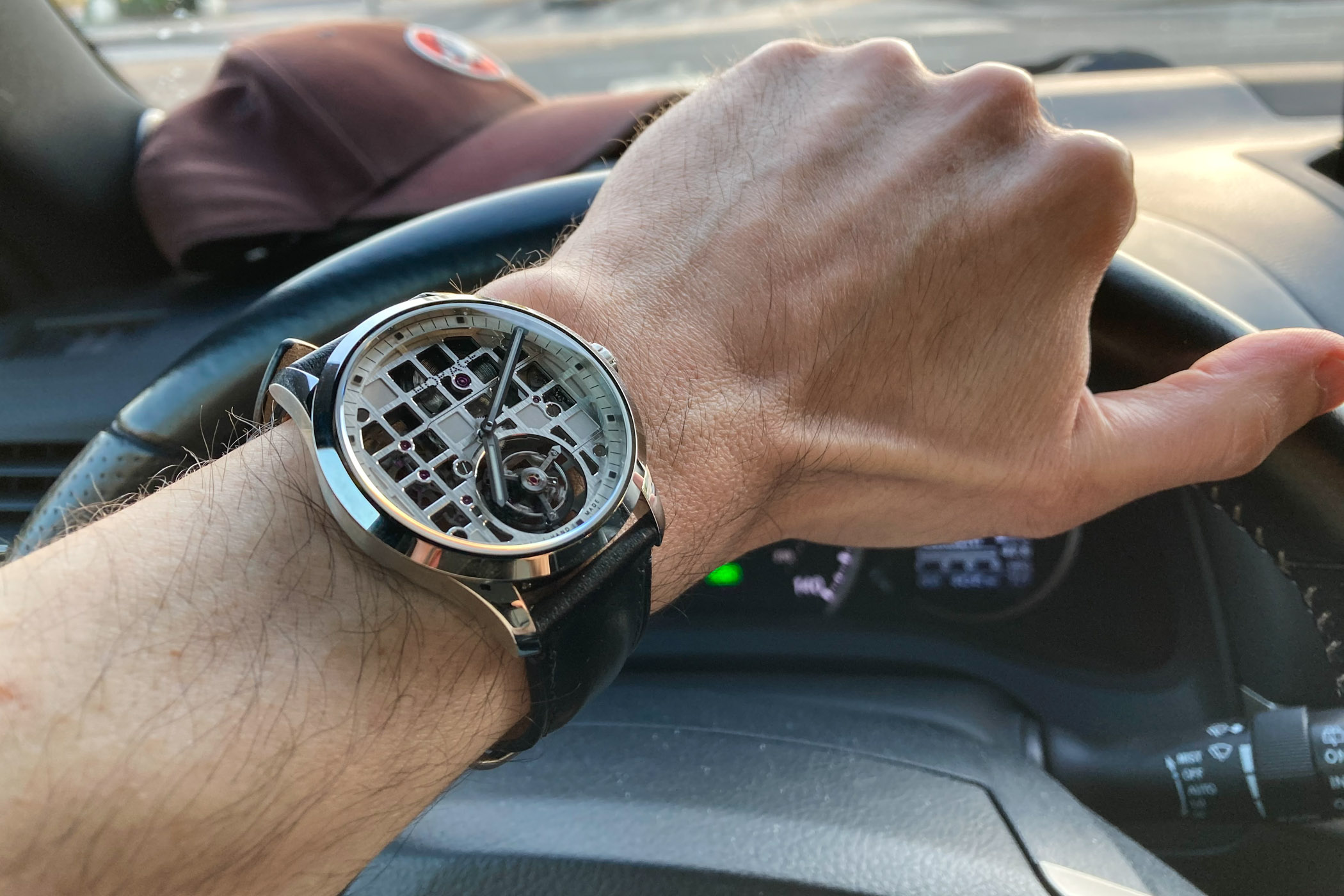 The Horage Tourbillon 1 went from the drawing board to a finished, COSC-accurate timepiece in 8 months with deliveries to customers within a year. And all of this during the worst pandemic in a century. Tools had to be internally designed, methods invented and I’m sure there were many sleepless nights. Elaborate and painstakingly hand-finished tourbillon calibres are works of art, so the lines can get blurred regarding price, but there’s nothing to suggest that the Tourbillon 1 is somehow inferior to counterparts at more than triple the price. In fact, quite the contrary. Certainly, don’t expect much hand-applied decoration on the movement parts or the tourbillon cage, but at that price, it’s entirely understandable.

The Horage Tourbillon 1 is open for preorders until August 1st, 2021 when the limited edition numbers will be finalized. Deliveries have already begun on early orders and will continue through December 2021. Current pre-order prices start at CHF 7,490 (ex. tax) with a few upgrades. Options include an official COSC certification, 18k gold case and PVD movement coatings.

For more information and to place an order, visit the HORAGE website.