In March of this year, Grand Seiko unveiled the watches that will make its 2020 collection, also marking the 60th anniversary of the brand. Among them were some elegant and discreet watches paying tribute to the first-ever GS watch, a robust and high-end diver with a brand new Spring Drive movement and watches focussing on traditional decorative skills. And… there was the SLGH002. A watch that, at first, will appear as a rather classic piece, bearing all the usual features of the brand. Sharp but elegant, superbly finished and powered by an in-house movement. However, there is some more in this watch, which actually is the most important of all the models launched in 2020. And it has to do with its movement.

Preliminary note: the watch you see here is a prototype, with a movement that wasn’t entirely reflecting the reality of the decoration. For this reason, the photos of the movement are from our colleagues at Hodinkee. 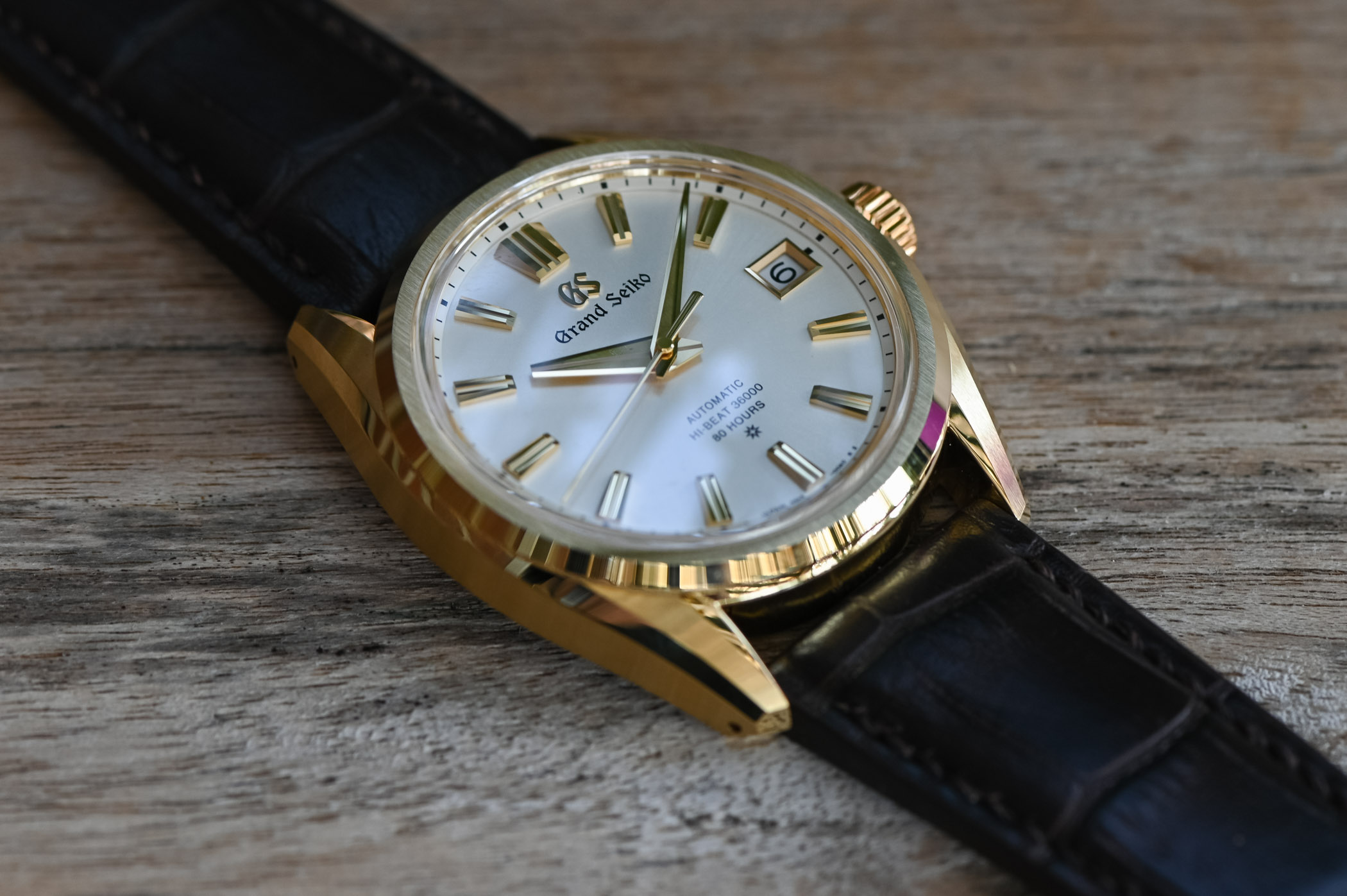 The Grand Seiko Elegance 60th Anniversary SLGH002 is a watch that has far more to tell than what you’d expect at first. Visually, it belongs to the GS family, no doubt about it. It could have been just a new high-end, luxurious limited edition, superbly executed and powered by one of the brand’s in-house automatic or hand-wound calibres. And in a way, it does. But there’s more than meets the eye. The SLGH002 is actually a highly innovative watch, something that has been done in a very discreet, low-key way – the Japanese way… What’s important with this watch isn’t its immaculate gold case, its detail-packed dial or its apparently high price. What matters is the movement and in particular its innovative escapement. A field of research where Grand Seiko was probably not expected…

The basics of the escapement

The escapement is one of the most critical parts of a watch and could be seen as the heart of a watch. This small, fragile and hyper-active part of a watch – with the balance – defines/regulates at what speed the energy from the mainspring barrel is released. The mainspring, which stores the energy of the watch, is a strong device that only wants to unwind. Without the escapement, its power would draw immediately. The escapement controls this phenomenon.

The escapement works in conjunction with the oscillator, giving impulses to power it. In return, it is regulated by the oscillator. Its role is critical in the ongoing search for the perfect precision, stability and durability of a movement. All in all, the couple oscillator/escapement (also known as the regulating organ) is what defines the time, by beating fractions of a second – usually 6 to 8 times a second. 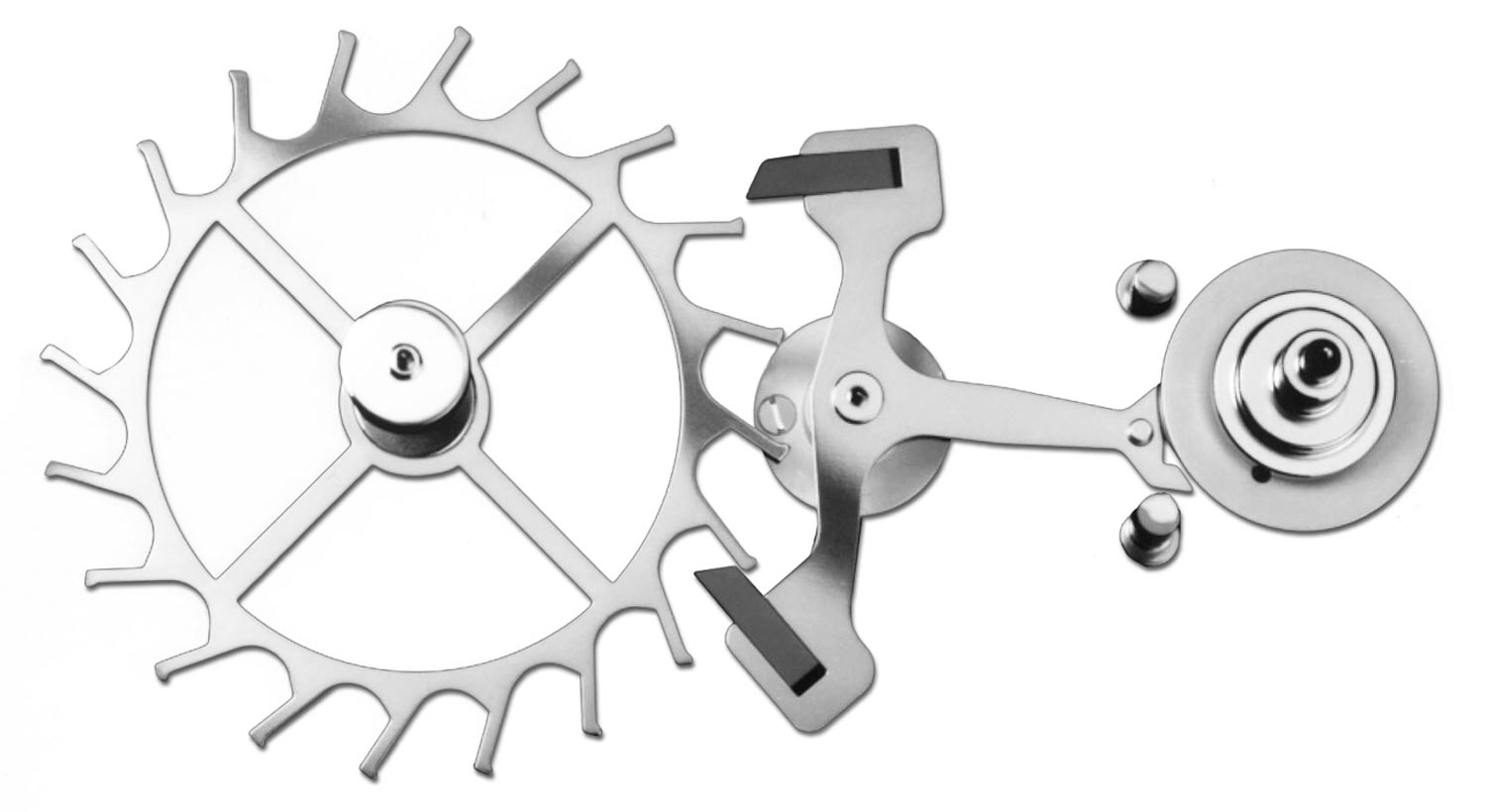 The Swiss Lever Escapement, based on a concept invented by Mudge, in the mid-1700s and still in use in most mechanical watches today.

As for innovation, let’s that the global watch industry is rather old-school. The escapement that is in use in approximately 99.99% of all mechanical movements these days relies on a concept invented by English Horologist Thomas Mudge in the middle of the 18th century. The reason for this status quo is simple; the lever escapement is simply extremely good at its job, can easily be serviced and adjusted and can be produced in large quantities. Of course, there are other types of escapements, like the detent escapement, and multiple ultra-innovative concepts that have barely made it into production. 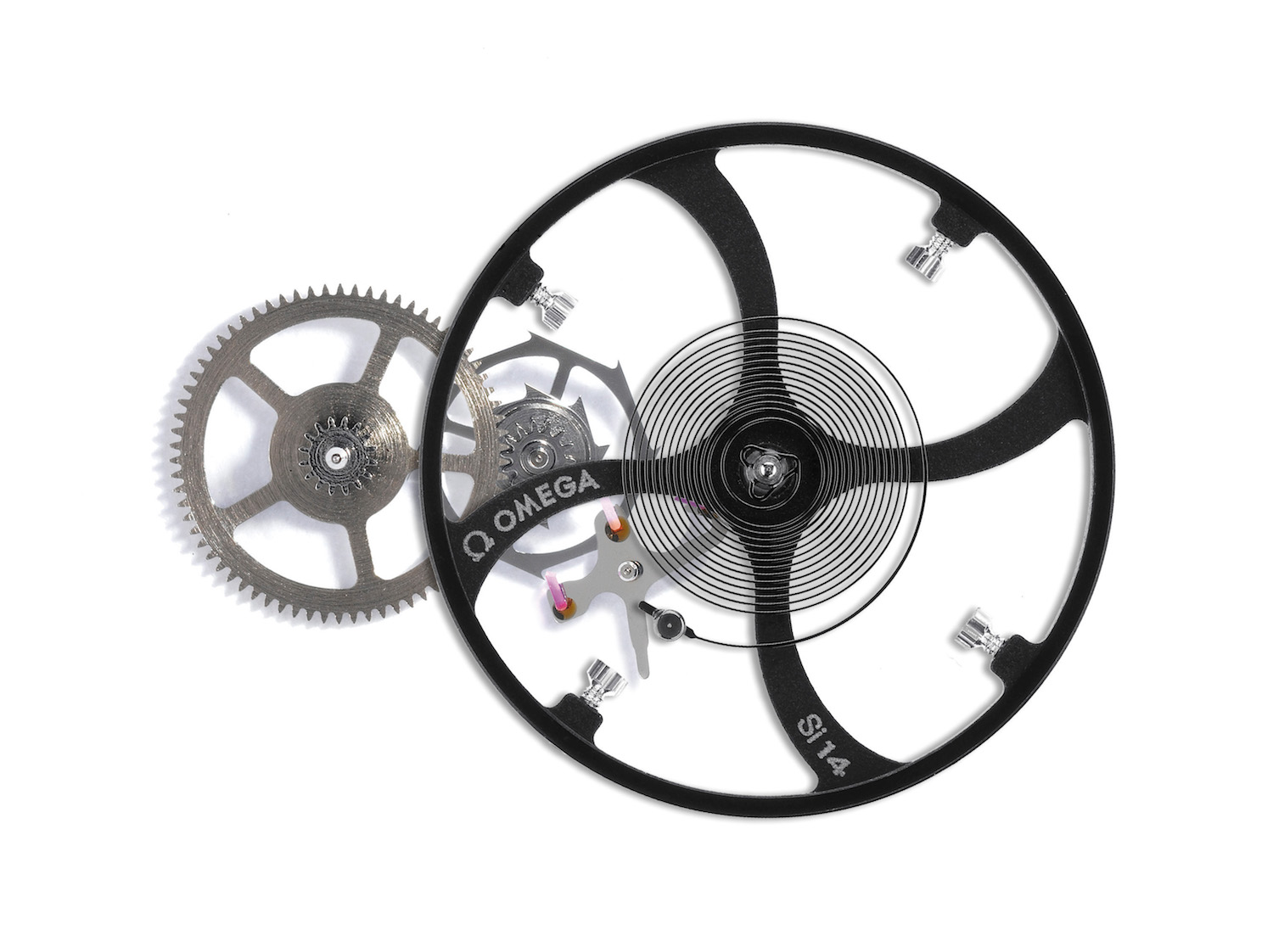 The Omega Co-axial Escapement, the only other type of escapement that is produced in large quantities.

In fact, the only other type of escapement that is produced in large quantities these days is the invention of George Daniels, the Co-Axial escapement that is now used by most of the Omega watch. And one of the reasons why the Grand Seiko Elegance 60th Anniversary SLGH002 is important is because it is one of the rare watches that is introducing a new type of escapement, which is available and can be produced industrially.

Beyond the use of innovative materials that helps to improve the specifications of modern escapements (for instance, silicon), or the use of high-frequency (something Grand Seiko is known for), the main innovation here is about the geometry of the escapement, its architecture and the way the locking and impulse phases are executed. 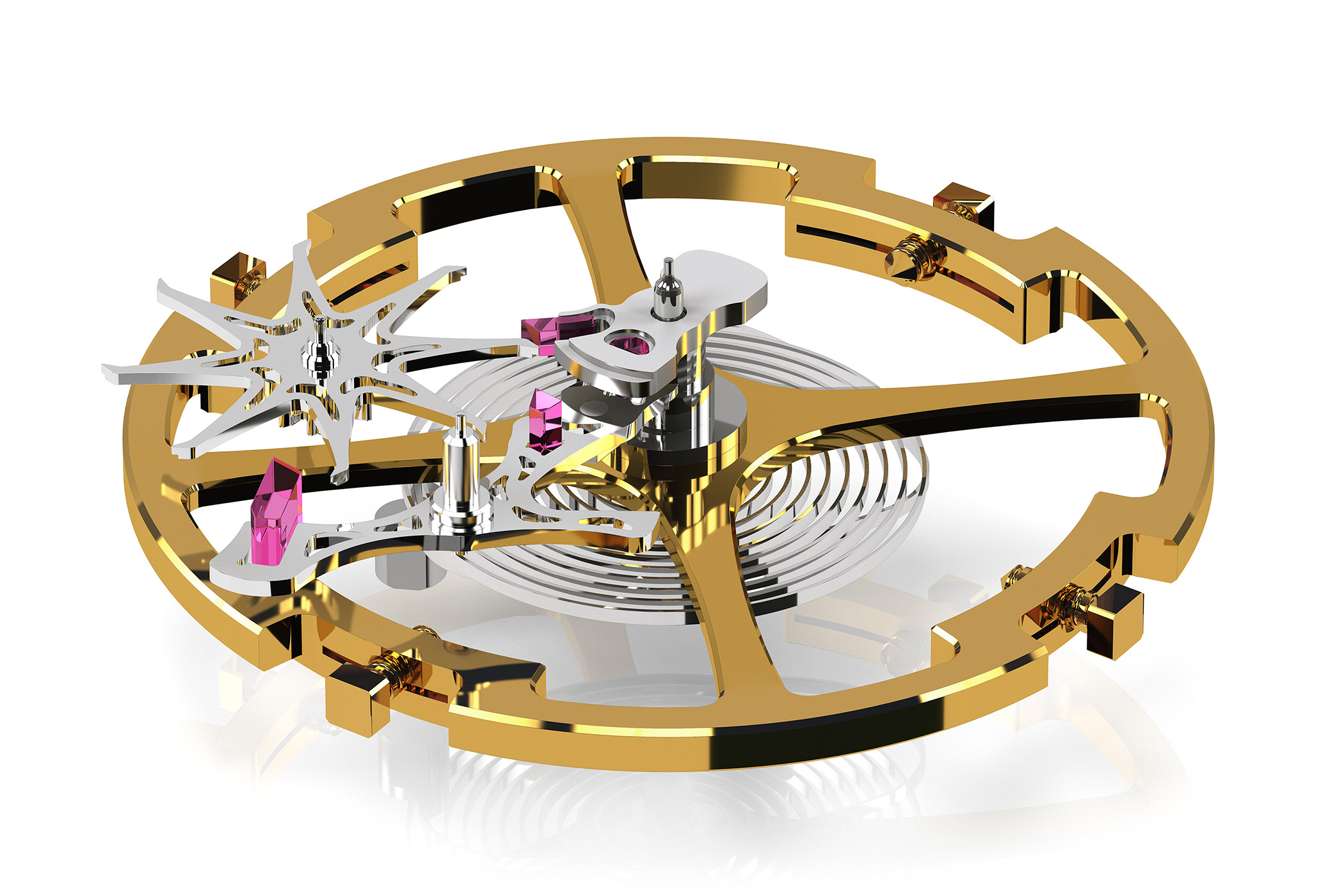 First of all, the architecture and shape of the parts used for this new Dual Impulse Escapement are different from what’s in use in the classic lever escapement. As you can see, the escape wheel has a star shape with 8 arms, instead of a teethed-wheel. This new escape wheel is open-worked, just like the pallet fork, to make the parts lighter and thus more energy efficient. These two parts have been crafted thanks to micro-electromechanical system technology (MEMS), allowing them to be machined to tolerances of one-millionth of a gram and to be 5% lighter than others, meaning less power is required to actuate them. 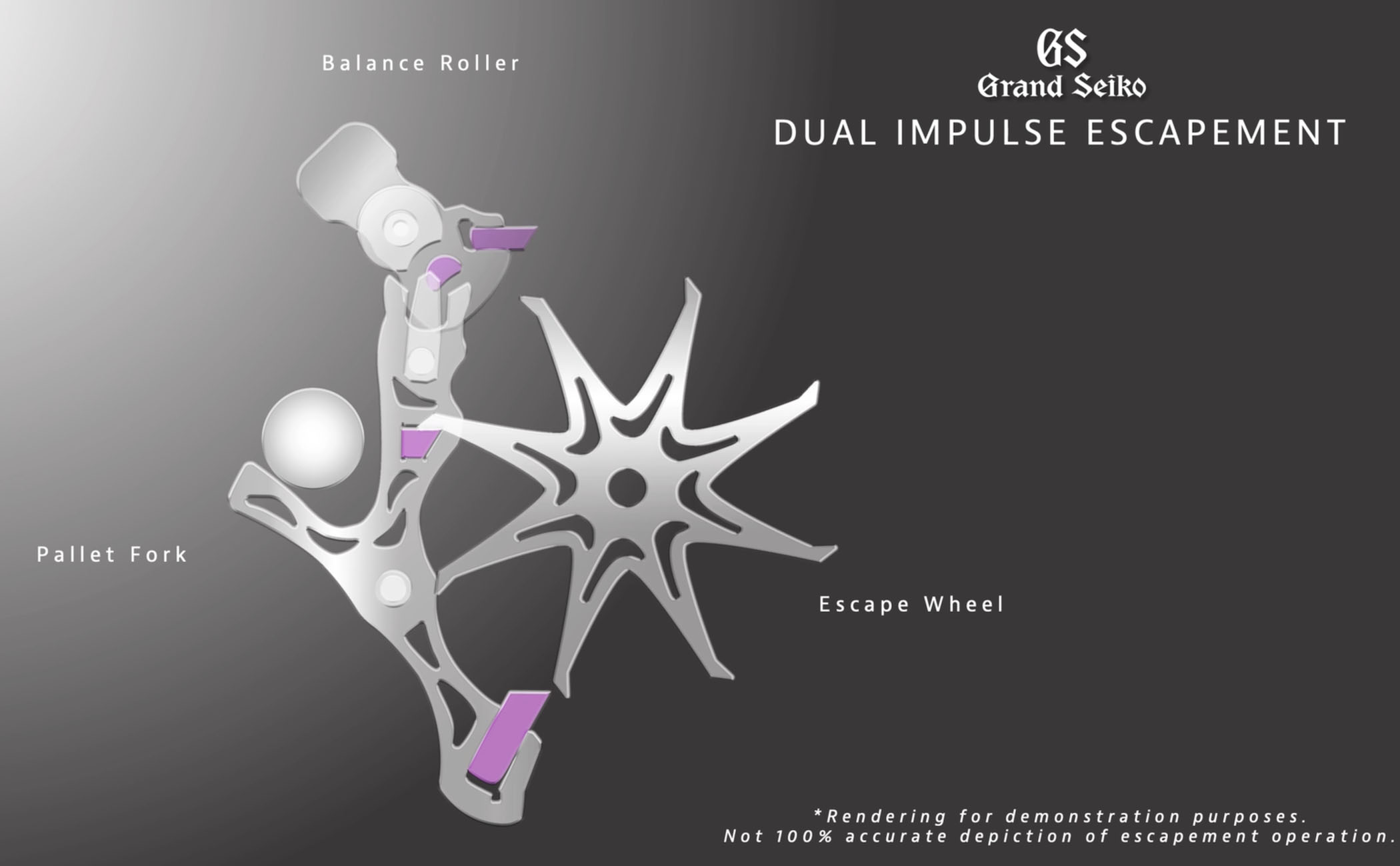 The main concept behind this Grand Seiko Dual Impulse Escapement is that the locking and impulse functions are dissociated – a solution presenting similarities with the Audemars Piguet or the Omega Co-Axial escapements, for example. In one direction, power is transmitted directly to the balance (clockwise), as the roller receives impulse directly on its jewel. In the other direction, it receives an indirect impulse via the pallet fork, as in a traditional escapement. Thanks to this dissociation of the locking and impulse functions, with friction occurring in only one direction, the escapement is more efficient (less friction means less energy required) and more wear-resistant. 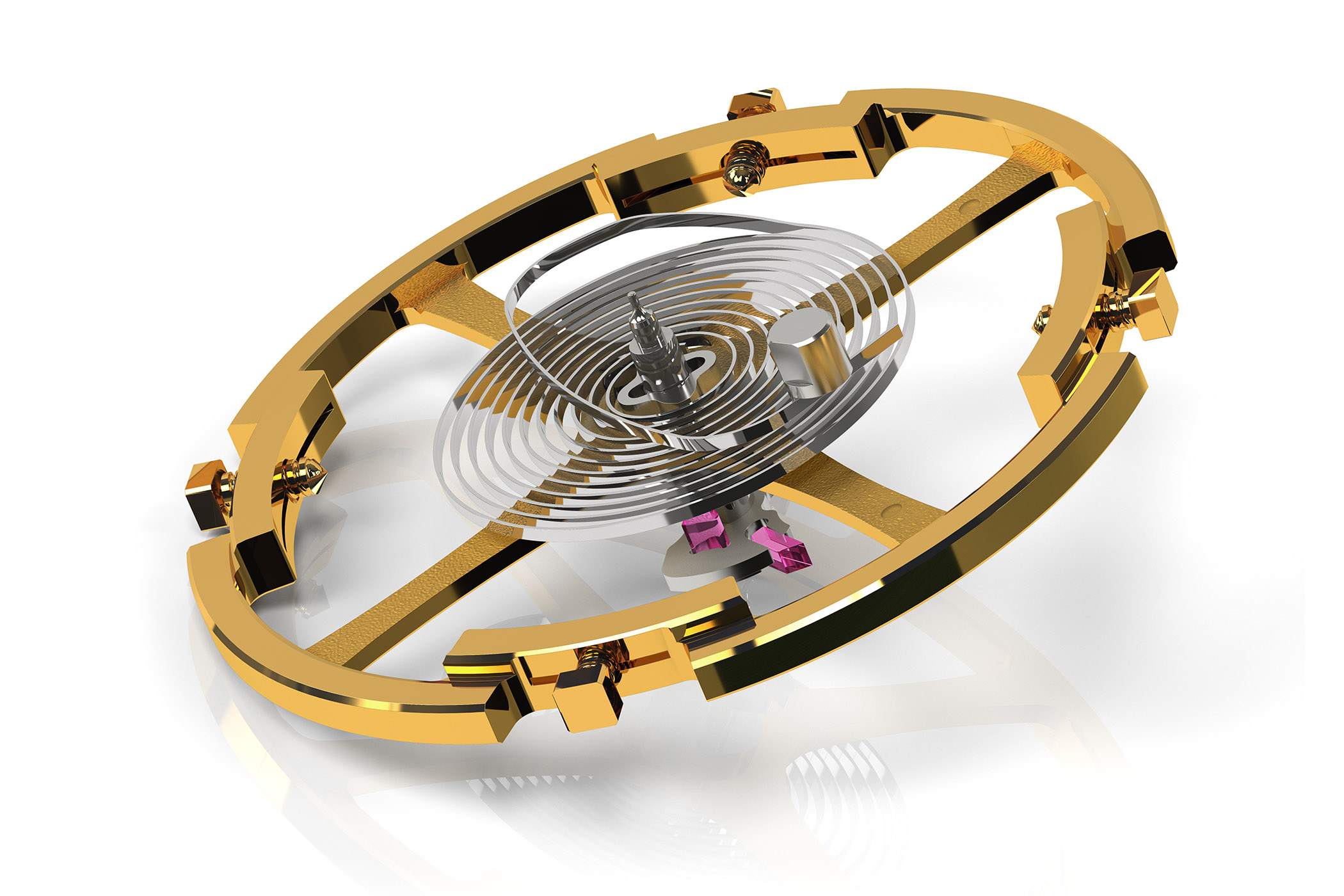 Calibre 9SA5’s new escapement works in conjunction with a new free-sprung balance that is more resistant to shock and friction and retains its precision for longer periods. And while most Grand Seiko movements rely on a flat hairspring, this new movement has an overcoil – to achieve the optimal shape for the overcoil, more than 80,000 simulations were undertaken in the lab. All of this to achieve greater efficiency and chronometry, better energy consumption and greater stability in the long run.

In addition to having a new escapement and a new regulation, the Grand Seiko Elegance 60th Anniversary SLGH002 also introduces a brand new movement – these innovations are not integrated in an existing engine but in the unprecedented Calibre 9SA5. And it has quite some arguments too. 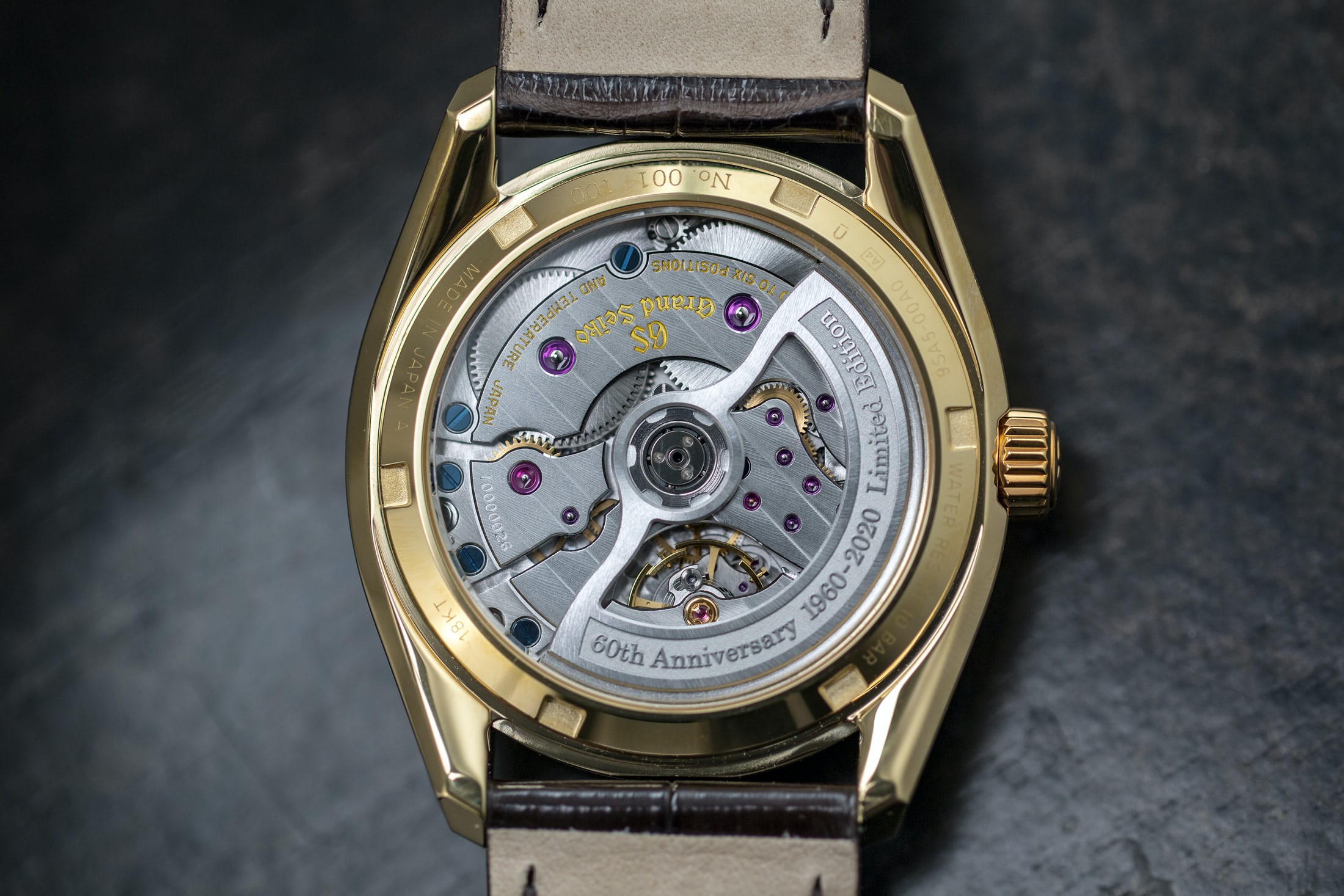 While Grand Seikos are mechanically always impeccable and can easily compete with its Swiss or German counterparts – most of the movements are at least on par with the established brands from the Swatch or Richemont Groups, or with Rolex, with some even surpassing them in terms of specifications – one of the complaints often heard is about thickness. Without even wanting them to be ultra-thin, GS automatic movements are usually on the thicker side, which can be seen as a sign of robustness on one side, but also something that doesn’t help the overall elegance. This has been taking into account within the new Calibre 9SA5.

Measuring 5.18mm in height, this brand new movement is 15% slimmer than the current 9S Grand Seiko high-beat calibre. This was achieved with an innovative horizontal layout of the barrel and gear trains. The two barrels are arranged in sequence to extend the power reserve from 55 to 80 hours. Finally, the balance is held in place by a transversal bridge – again something new for Grand Seiko, which ensures greater stability and shock resistance. 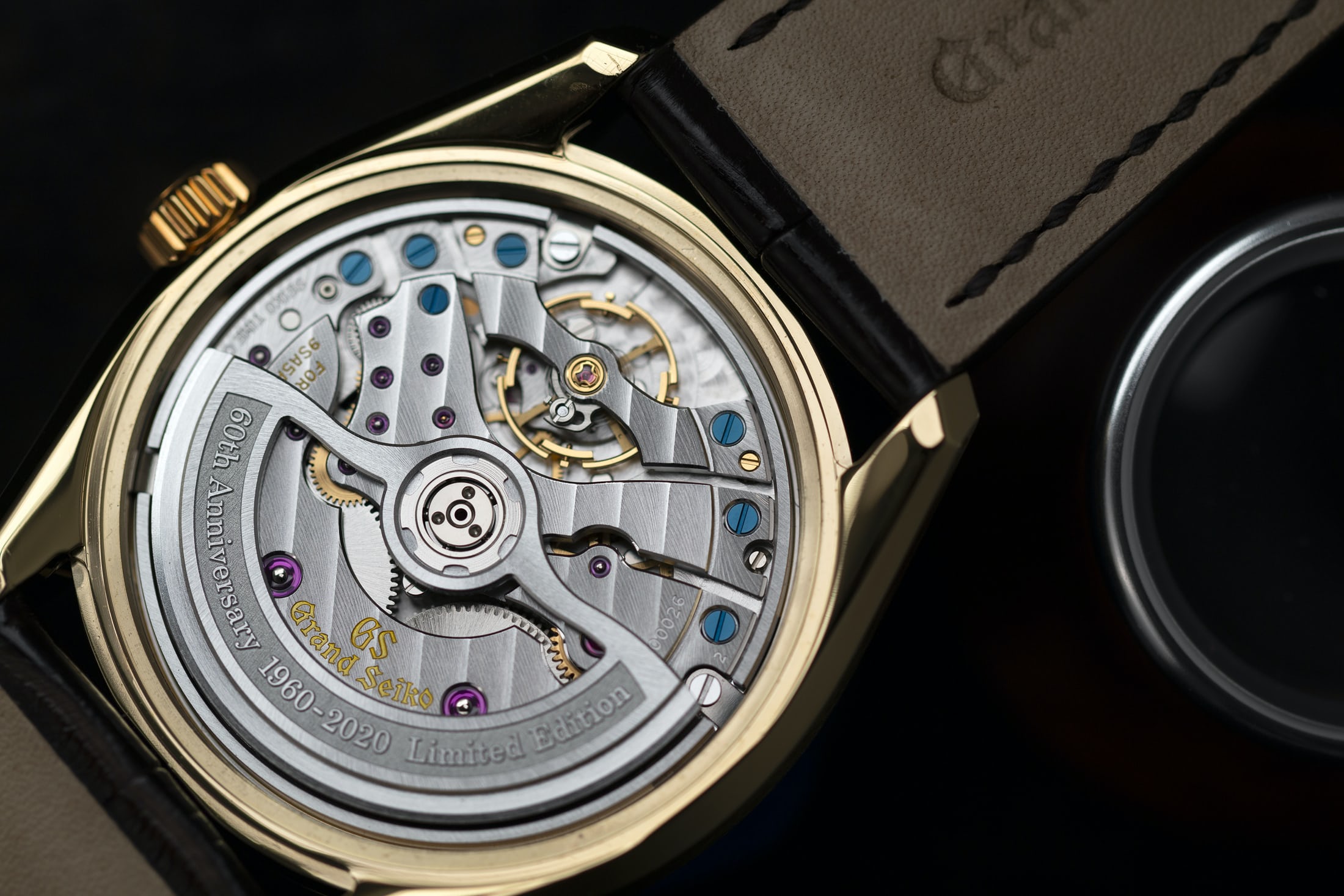 Also, the traditional technical solutions used by Grand Seiko are still applied, for instance, the high frequency of the oscillator, beating at 5Hz of 36,000 vibrations/hour – while most modern movements are working on a 4Hz frequency (28,800 vibrations/hour). This is another solution to improve the accuracy of the watch, as in theory, a higher frequency implies better rate stability – the more beats, the more chances the oscillator can compensate its own errors.

Finally, besides the technical prowesses in this movement, Grand Seiko has done an intense work on its look and its finishing, to make it far more pleasant for the trained eyes of watch enthusiasts. The overall look is less technical than the usually cold-looking movements of the 9S series. This one has far more charm, far more decorum, which brings added value for the aficionados. The bridges are nicely curved, with polished bevels on the edges and more subtle wave-pattern on the flat surfaces. Grand Seiko also uses large thermally-blued screws, mostly for decorative purposes – but once again, this participates in a more theatrical movement. Finally, the oscillating weight comes with a new, lighter and more opened design, allowing for a better view on the very nicely decorated movement.

And there’s a handsome watch too…

After spending quite some time on technical concerns, let’s not forget that there’s also a watch around this movement… and a beautiful one too, the Grand Seiko Elegance 60th Anniversary SLGH002. 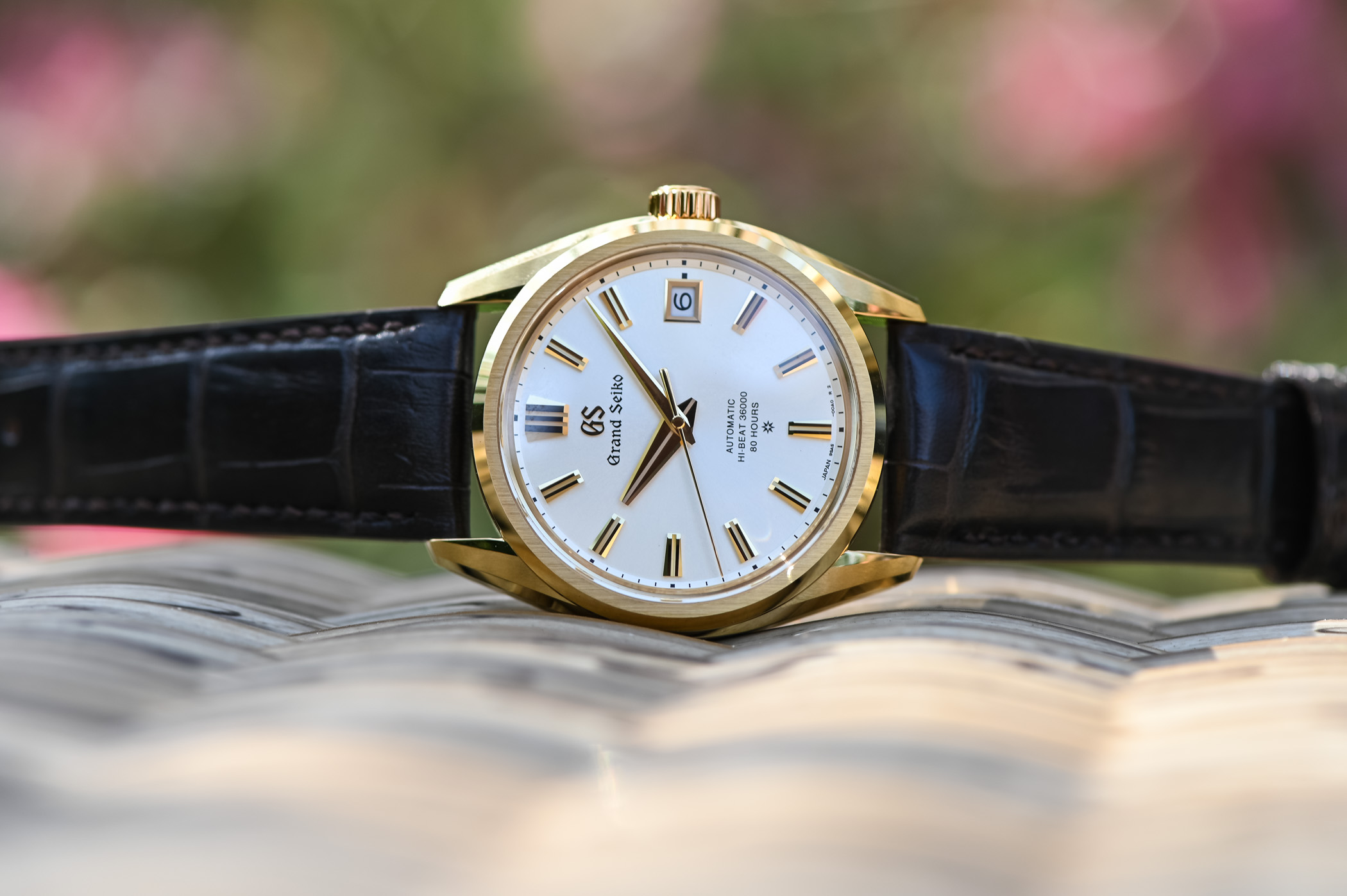 No real surprises here, as this watch is the epitome of a luxurious Grand Seiko. Sharp but not aggressive, meticulously finished, simple at first but overly detailed when looked closely, still quite imposing but not oversized and, overall, 100% in line with what the brand stands for since 1960 – if you look back at the earliest models produced by Grand Seiko and what comes out of the Shizukuishi Studio now, one can’t deny the impressive consistency in the design and spirit. 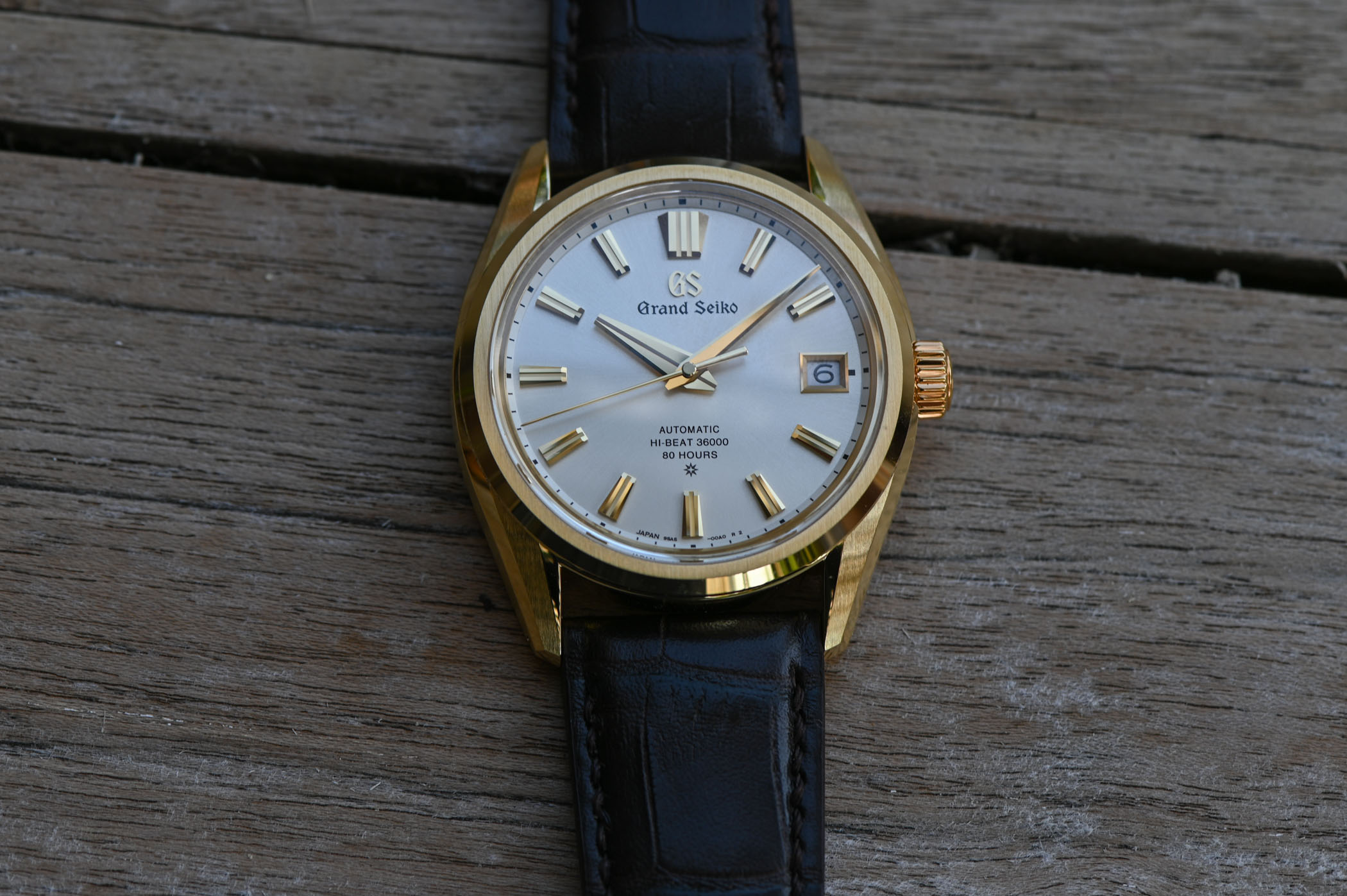 The SLGH002 is a watch with a specific vocation. It is an image builder, a communication tool for the brand, to be used for the introduction of the new Calibre 9SA5. As such, it has to be seen as a collector’s item, a rare piece, almost a concept watch that showcases all the savoir-faire of the brand. As such, it is rare, exclusive and not really accessible. But there’s no doubt that this new movement will be seen in more reasonable, steel or titanium watches in the upcoming collections. 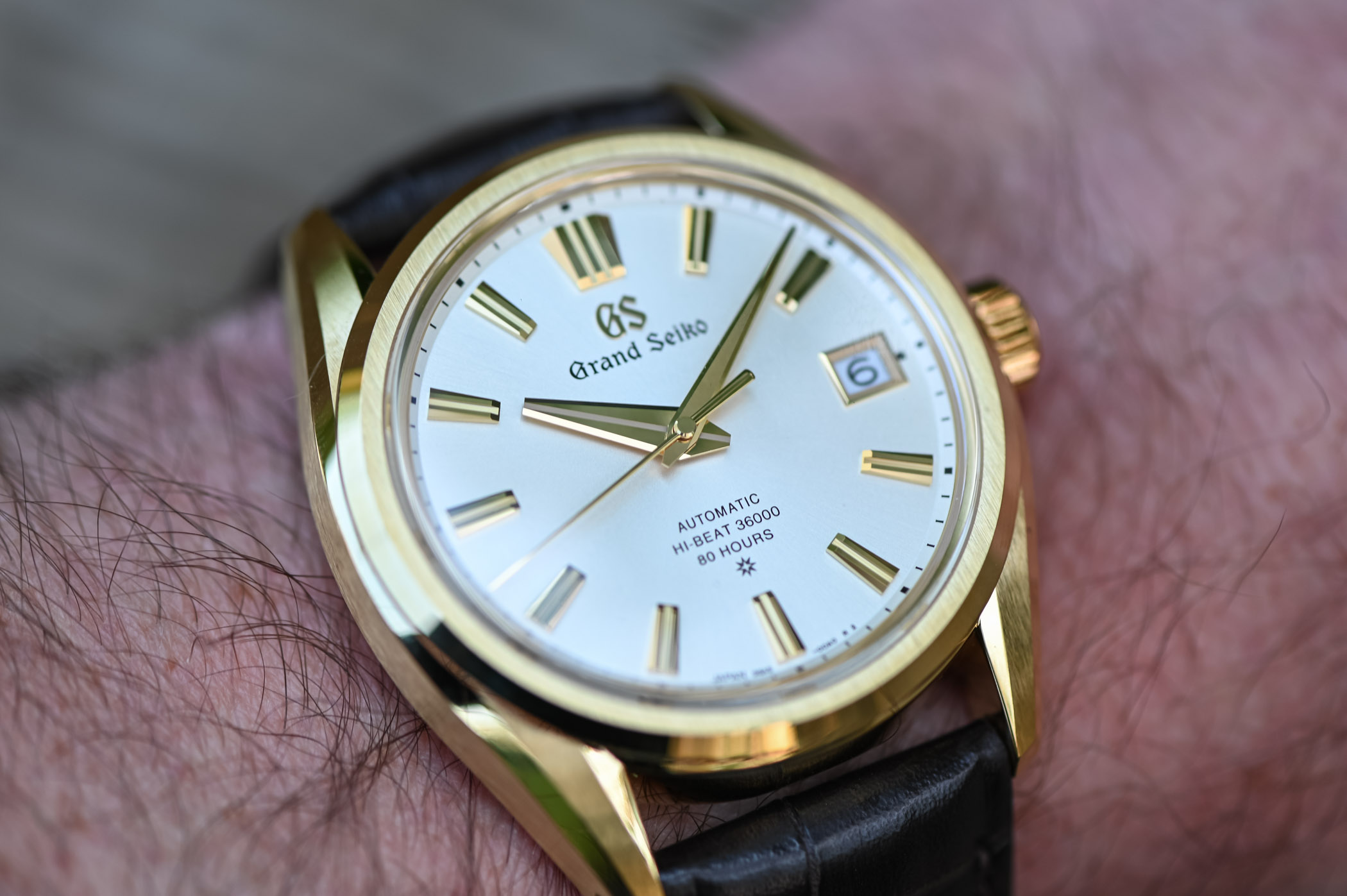 While familiar, the shape of the Grand Seiko SLGH002 is novel, with an unprecedented case. Measuring 40mm in diameter and 11.7mm in height, it is here crafted in 18k yellow gold. Some of the traditional elements of GS’ design are still present, such as the combination of highly polished surfaces and deeply brushed accents. But the shape itself is like the movement, lighter, more charming, more elegant. What doesn’t change is the impeccable finishing of the case, with this incredible lustre of the Zaratsu polished surfaces – distortion-free technique. The bezel is also very pleasant, with a polished bevel and a straight brushed surface. 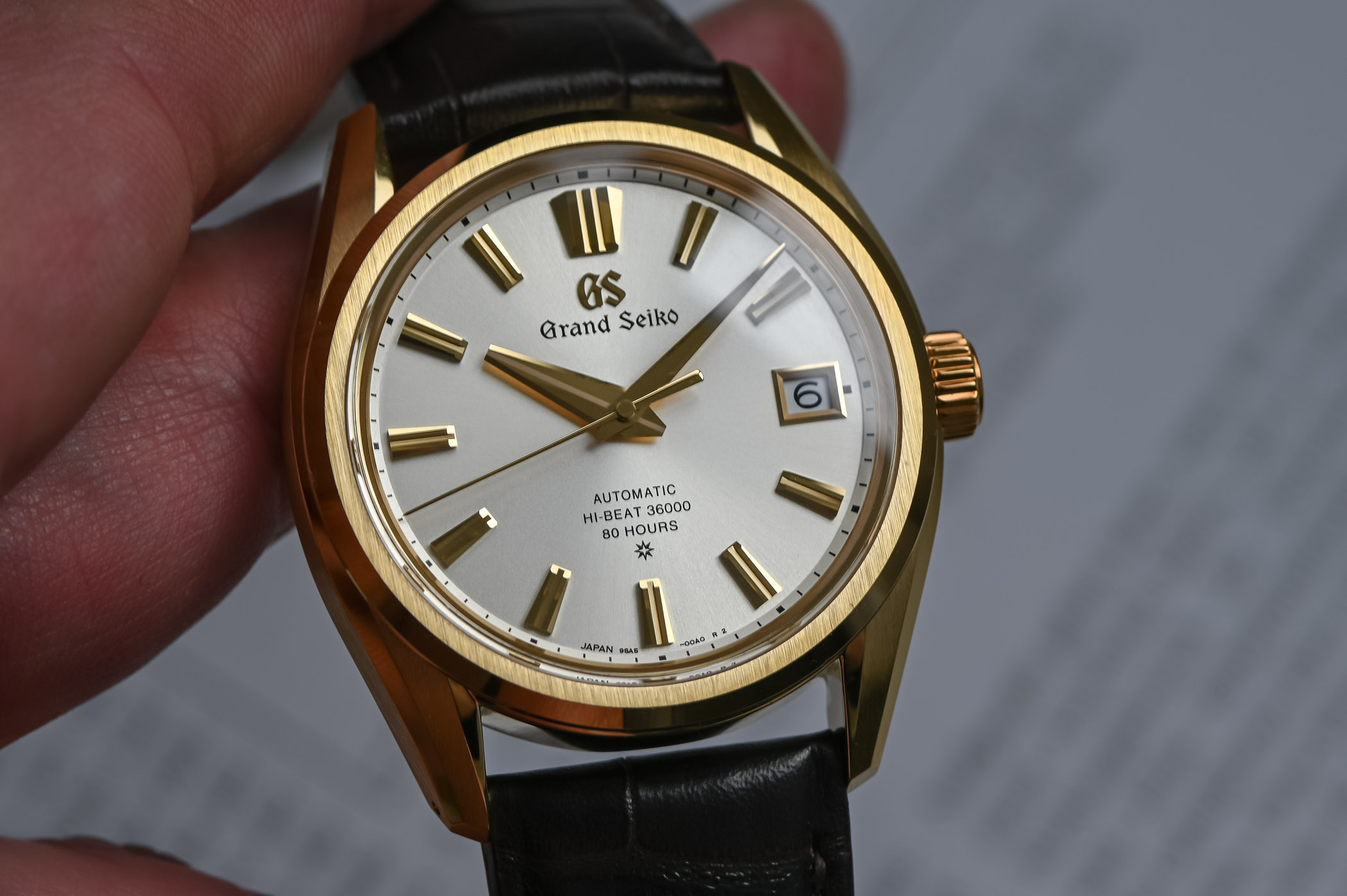 As for the dial, Grand Seiko plays on discretion here, with a sunray-brushed silver-coloured dial. Soft, nicely matching with the warm gold tone and easy to read, it needs to be closely observed to reveal its true beauty… those hands and indexes that are the hallmark of Grand Seiko. As usual, the hands and applied markers (here made from 18k gold too) are ultra-sharp, combining polished and matte surfaces to help reading the time. But here again, the design feels familiar but is also new, and slightly bolder than usual, without losing the elegance of previous models.

Secured to the wrist thanks to a dark brown crocodile strap with gold folding clasp, this makes the SLGH002 a dress-ish watch with presence and robustness. It wears well thanks to short, curved lugs but never feels fragile – something you don’t really expect from GS anyway.

As said, the Grand Seiko Elegance 60th Anniversary SLGH002 is an exclusive piece, not only limited in production – 100 pieces only – but also offered at a quite steep price of EUR 45,000 or USD 43,000. Keep in mind that this watch is an announcement for future models, a way to advertise the new and impressively innovative movement that Grand Seiko has developed.