When thinking about tourbillon watches, two indisputable references immediately come to mind. There is Breguet, the inventor of the tourbillon himself, and there’s Girard-Perregaux, maker of the sublime Tourbillon with Three Gold Bridges. This specific, symmetrical architecture of the movement has become a hallmark for the brand and today Girard-Perregaux continues to pay tribute to its founder with a modernized yet faithful watch, the superb La Esmeralda Tourbillon With Three Gold Bridges.

The Tourbillon was invented by Breguet in the late 18th century and patented in 1801. The oscillator and escapement of watches are adversely affected by gravity. To negate the effects of Earth’s attraction, Breguet had the idea to use a mobile carriage rotating at slow speed, housing the balance, balance-spring and escapement with the aim to average out positional errors. Breguet manufactured just a few tourbillon watches and his invention soon fell into oblivion until the second half of the century.

From 1860 onwards, with the development of chronometry and international watch fairs, the tourbillon emerged from this period of hibernation. Among the Swiss watchmakers that made a name for themselves crafting tourbillon watches was Constant Girard-Perregaux, known in particular for his sublime Tourbillon with Three Gold Bridges. 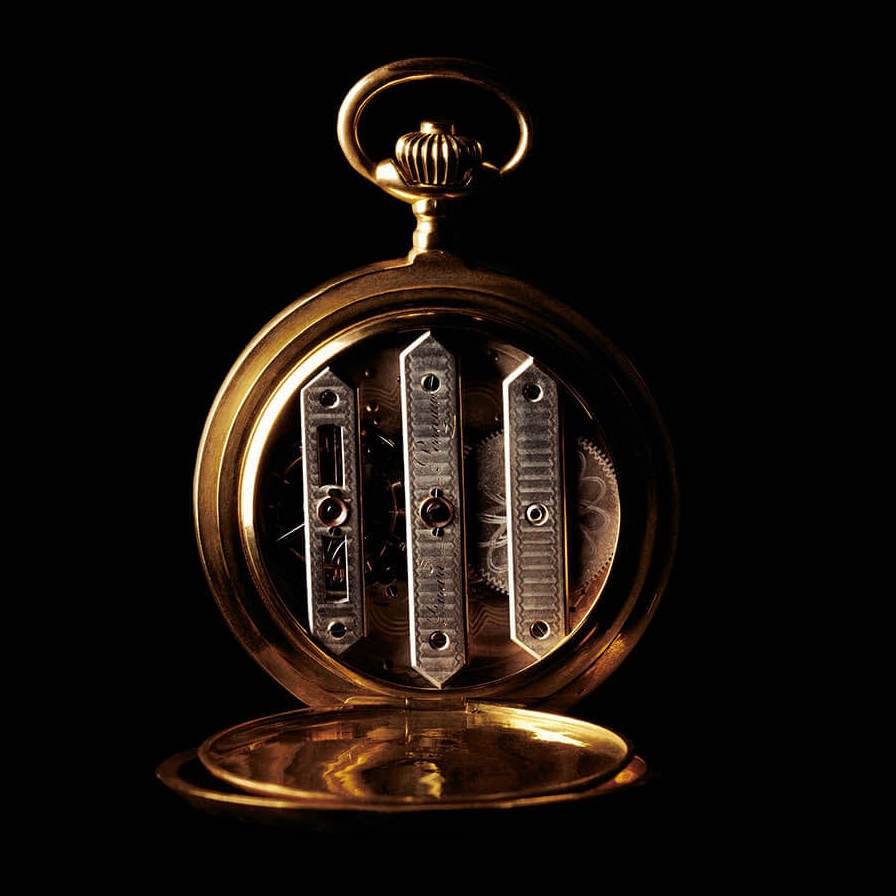 The birth of the Tourbillon with Three Gold Bridges had a long genesis, the work of a lifetime. Like many of his peers, Constant Girard-Perregaux first fitted the tourbillon escapement on standard movements. But very soon he focused on the structure of the movement and the shape of his parts to create this unique architecture with parallel bridges. Thanks to his ambitious staging of the components, he succeeded in giving the tourbillon an artistic and symbolic dimension to what was previously considered a purely technical mechanism.

At the 1867 Paris Universal Exhibition, Constant Girard-Perregaux presented a pocket watch with straight bridges and pointed ends. The shape and material of the bridges gradually evolved. To protect the design of his movement with three arrow-shaped parallel bridges, Constant Girard-Perregaux applied to the United States Patent Office (no such competent body existed at the time in Switzerland) for a patent that was awarded to him in 1884. 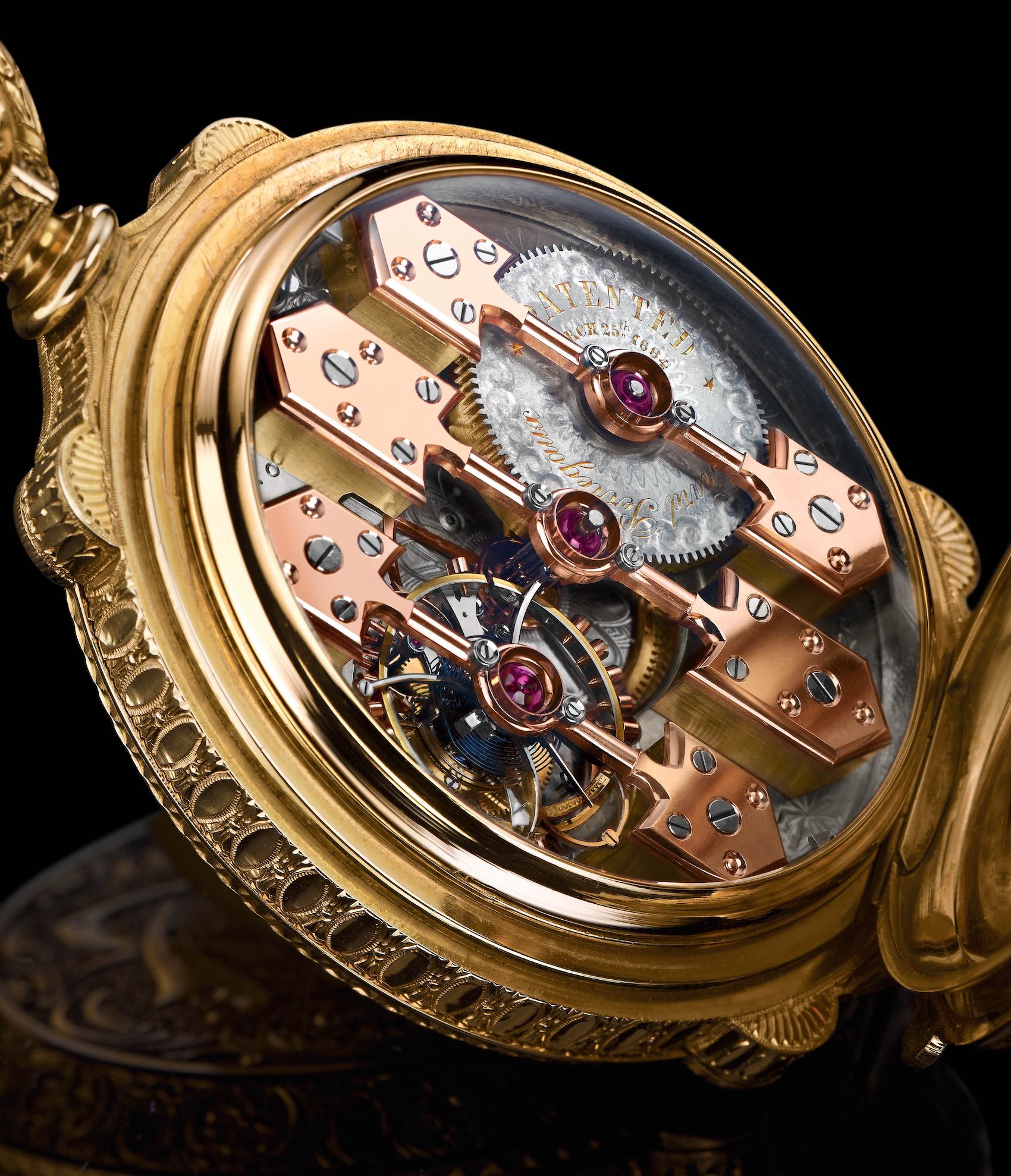 Gold medal at the 1889 Paris Universal Exhibition – Once the watch of Porfirio Diaz, president of Mexico

Numerous reports from the 1889 Universal Exhibition make reference to the exceptional Girard-Perregaux watches, in particular to a high-precision chronometer whose beauty couldn’t be ignored. This pocket tourbillon watch had achieved remarkable results at the Neuchâtel Observatory. Its movement was a tour de force both technically and aesthetically. The gold case was a masterclass in engraving. This sublime creation won the Maison Girard-Perregaux a gold medal. 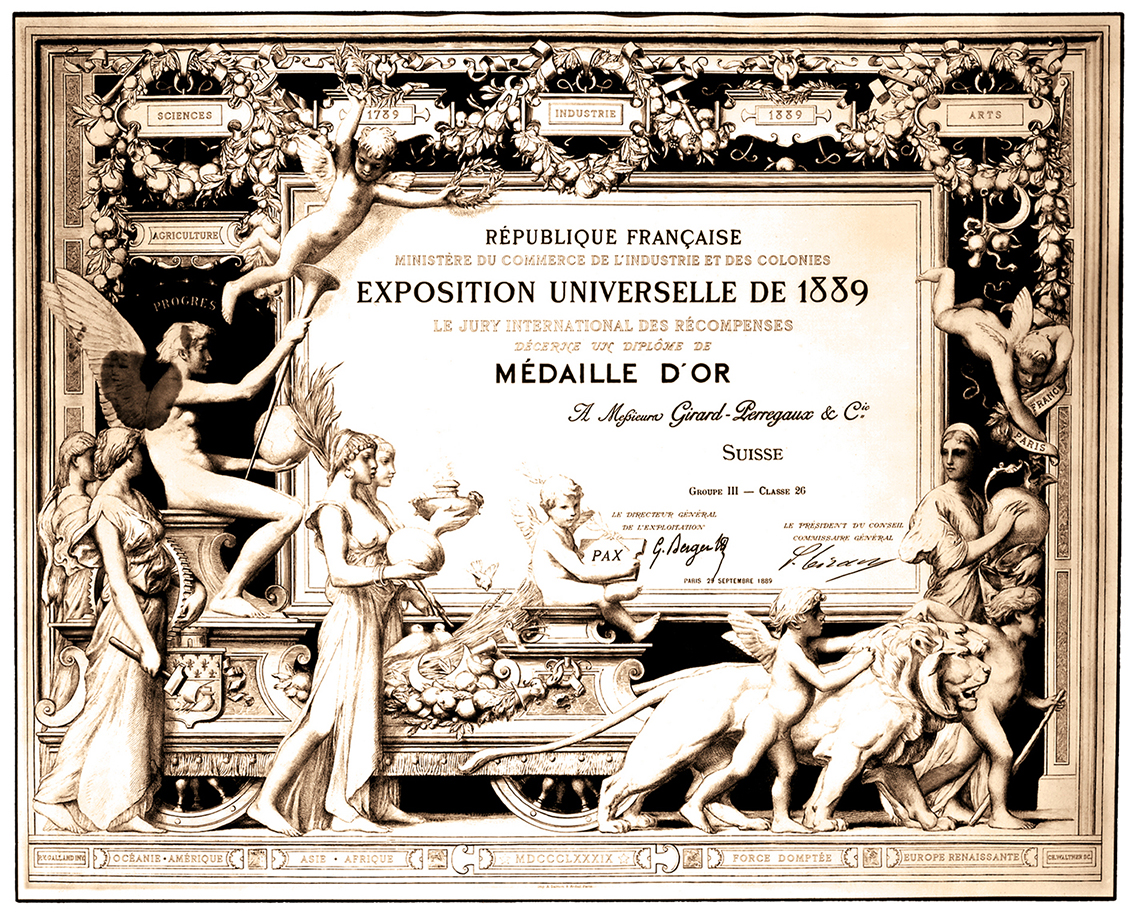 The watch became known as La Esmeralda, which is the name of the boutique in Mexico, owned by the agents Hauser and Zivy, to whom it was entrusted. La Esmeralda subsequently became the property of Porfirio Díaz, president of Mexico… until it was bought back from his great-grandson in the 1960s to become the iconic model of the Girard-Perregaux Museum’s collections.

The renaissance of the Tourbillon

Girard-Perregaux manufactured tourbillon watches until the beginning of the 20th century. Fast forward to the 1970s, the new accurate quartz movements gained popularity and plunged the Swiss watch industry into a deep crisis. The production of mechanical movements was reduced to a trickle. But in the early 1980s, Girard-Perregaux was one of the few watchmaking companies to bet on the renaissance of mechanical watchmaking. The brand then started to work on a series of 20 tourbillon pocket watches. In 1991, on the occasion of its bicentenary, Girard-Perregaux presented a wristwatch version of the Tourbillon with Three Gold Bridges. During the succeeding years, countless variations of this GP emblem have been presented with different shapes, functions or technical sophistication.

Introduced in 2016, the modern La Esmeralda edition is not the most technically complex take on the GP tourbillon but it is surely one of the most exquisite examples of this horological icon. The version we had for review is presented in a 44mm 18k white gold case offering an even more contemporary and restrained look. 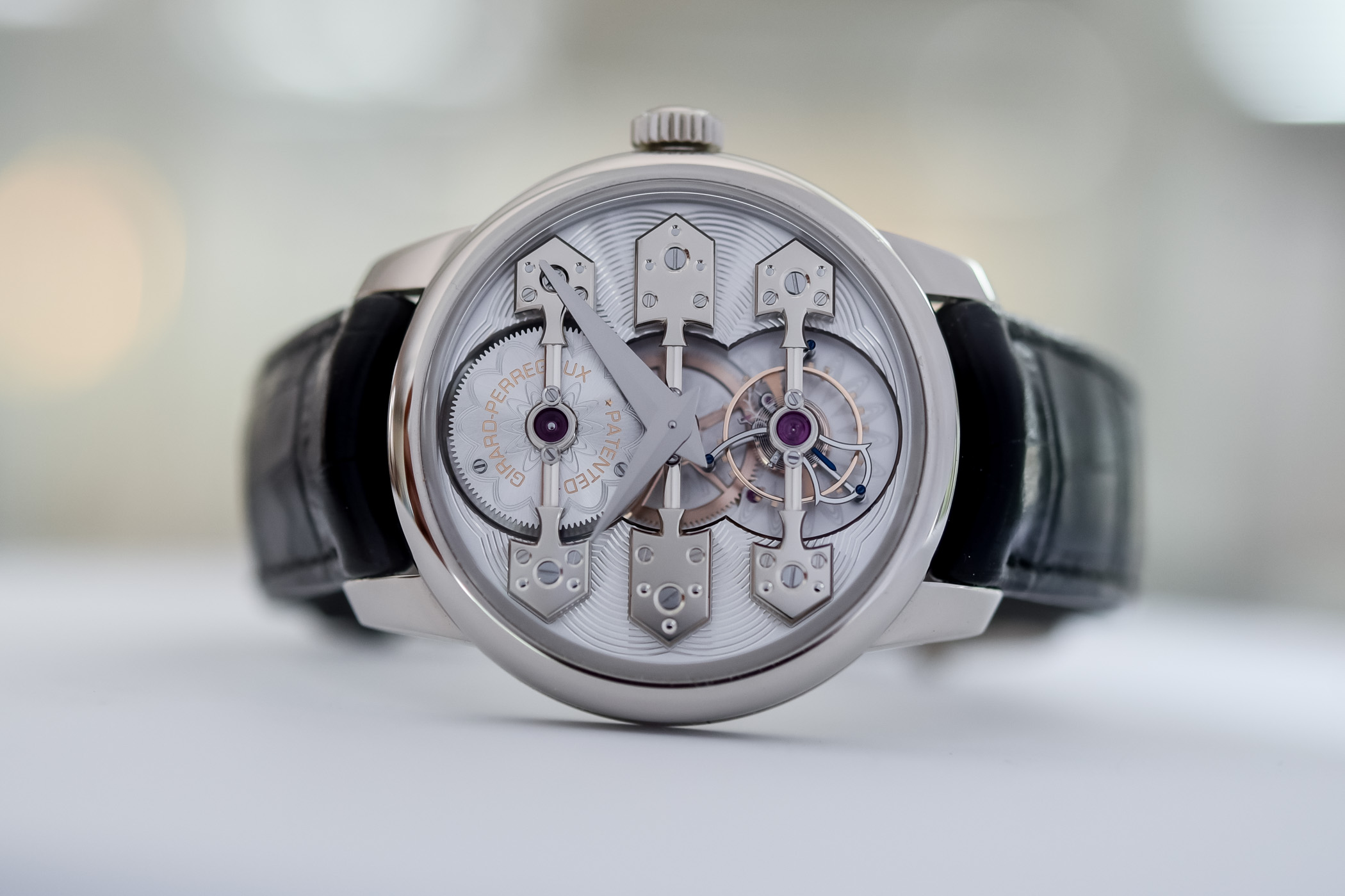 The superb layout of the movement is served by a minimalistic decoration with a guilloché plate and tone-on-tone gold bridges. The use of the original bassiné (rounded-off) arrow-shaped bridges brings a unique beauty to the watch. Rounding-off is extremely difficult to achieve; it consists in obtaining a domed surface in an arc, rather than a flat surface. This highly uncommon finish requires exceptional dexterity and concentration to obtain a perfectly regular semi-circle over the entire length. Any imperfection would be immediately visible by reflected light. The numerous inward angles are equally difficult to chamfer. All the movement components are decorated with the same care, whether or not they are visible. The result is truly breathtaking… It is extremely rare to see movements finished to this level. 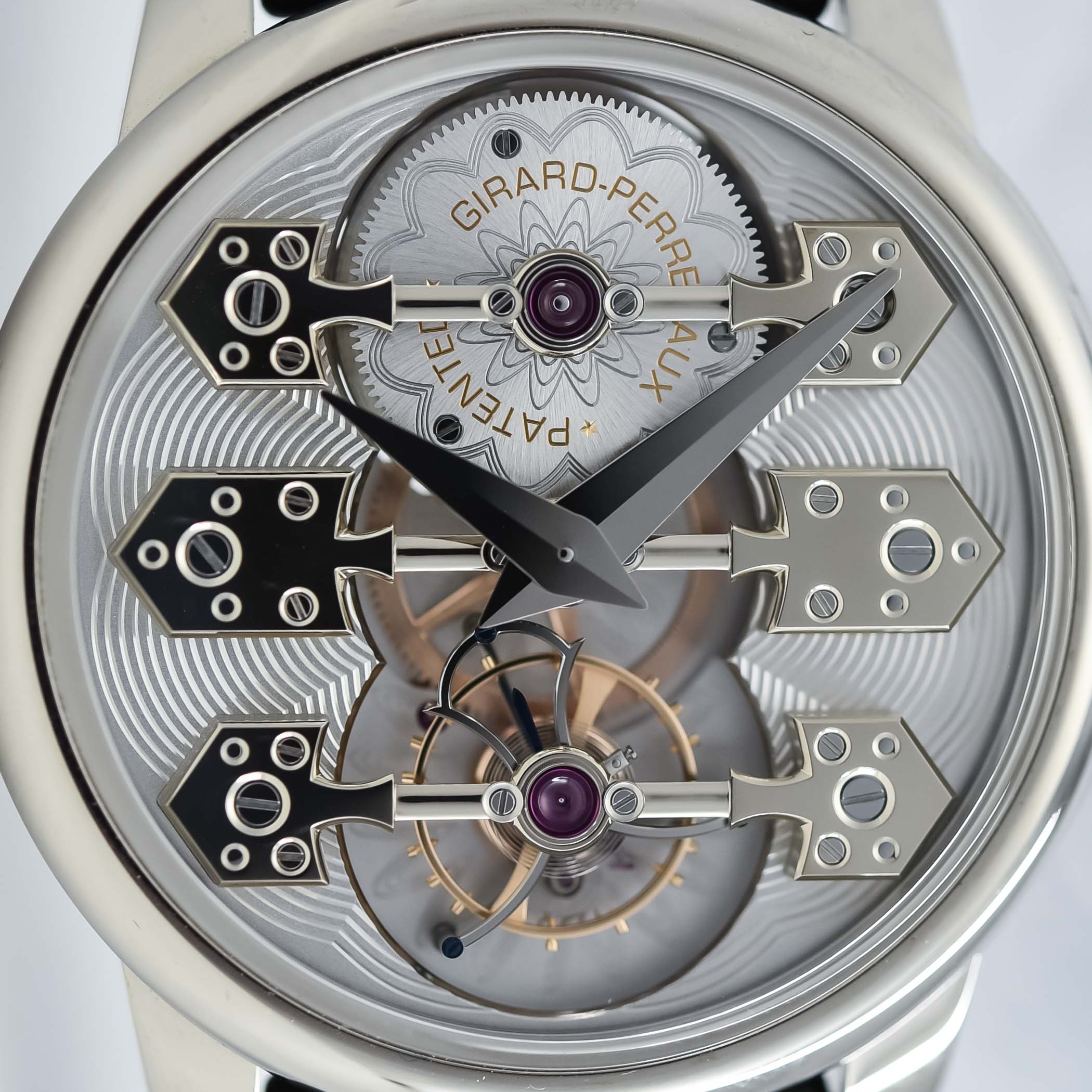 Turning the watch over, the exhibition caseback allows a view of the other side of the movement featuring Geneva stripes and a large straight bridge in the centre. The watch individual number is engraved both on a plate affixed to the movement and on the caseback. 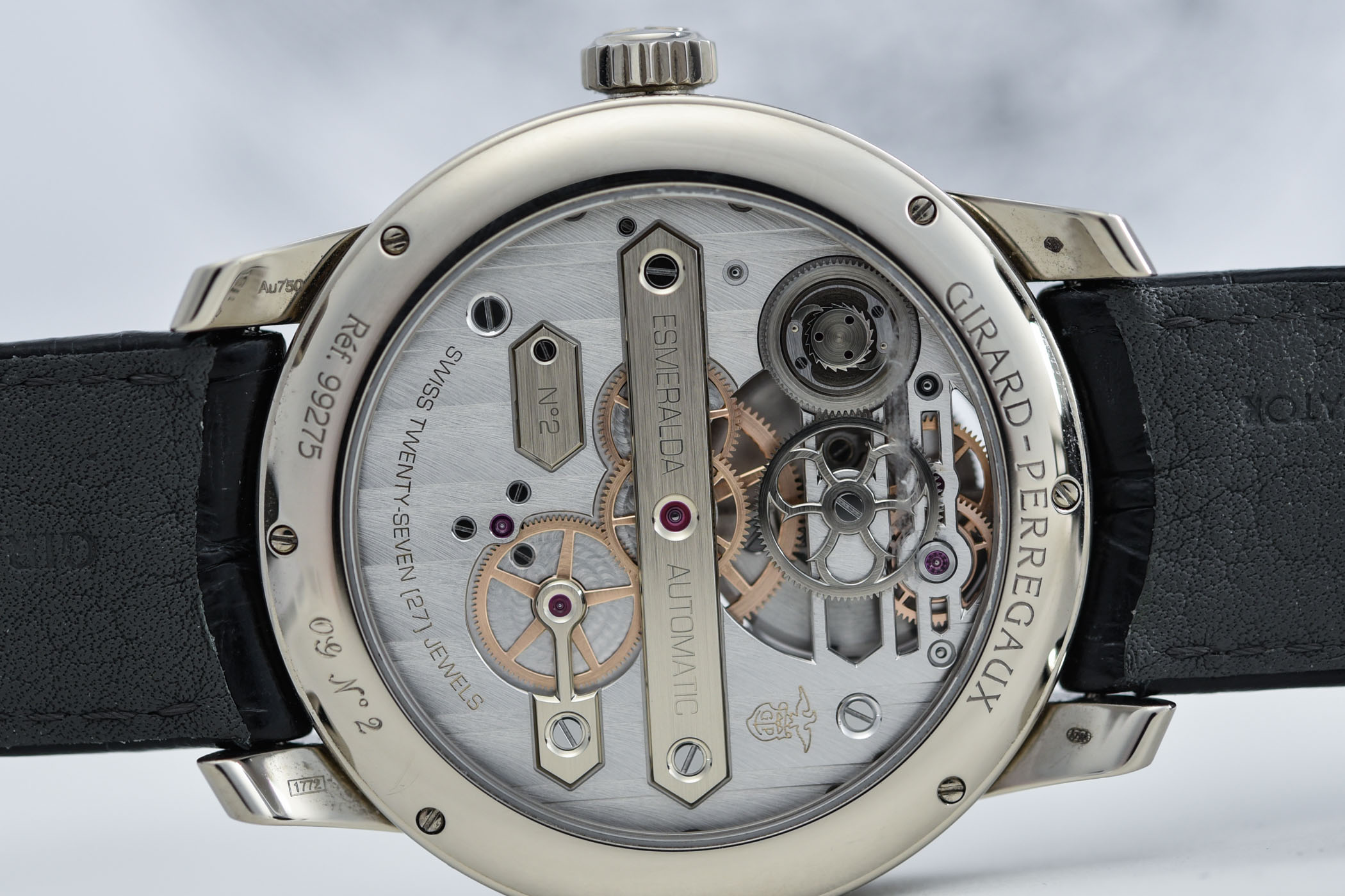 From a technical perspective, the calibre GP09400 measures 36.60 mm in diameter and is 8.41mm thick. The tourbillon carriage is comprised of 80 components. With its characteristic GP lyre-shaped carriage, it houses a balance wheel oscillating at 21,600 vibrations per hour (3Hz). The movement boasts 60 hours of power reserve and is automatic. It features the ingenious GP micro-rotor system. The platinum oscillating mass is fitted concentrically under the barrel, leaving the movement architecture intact. 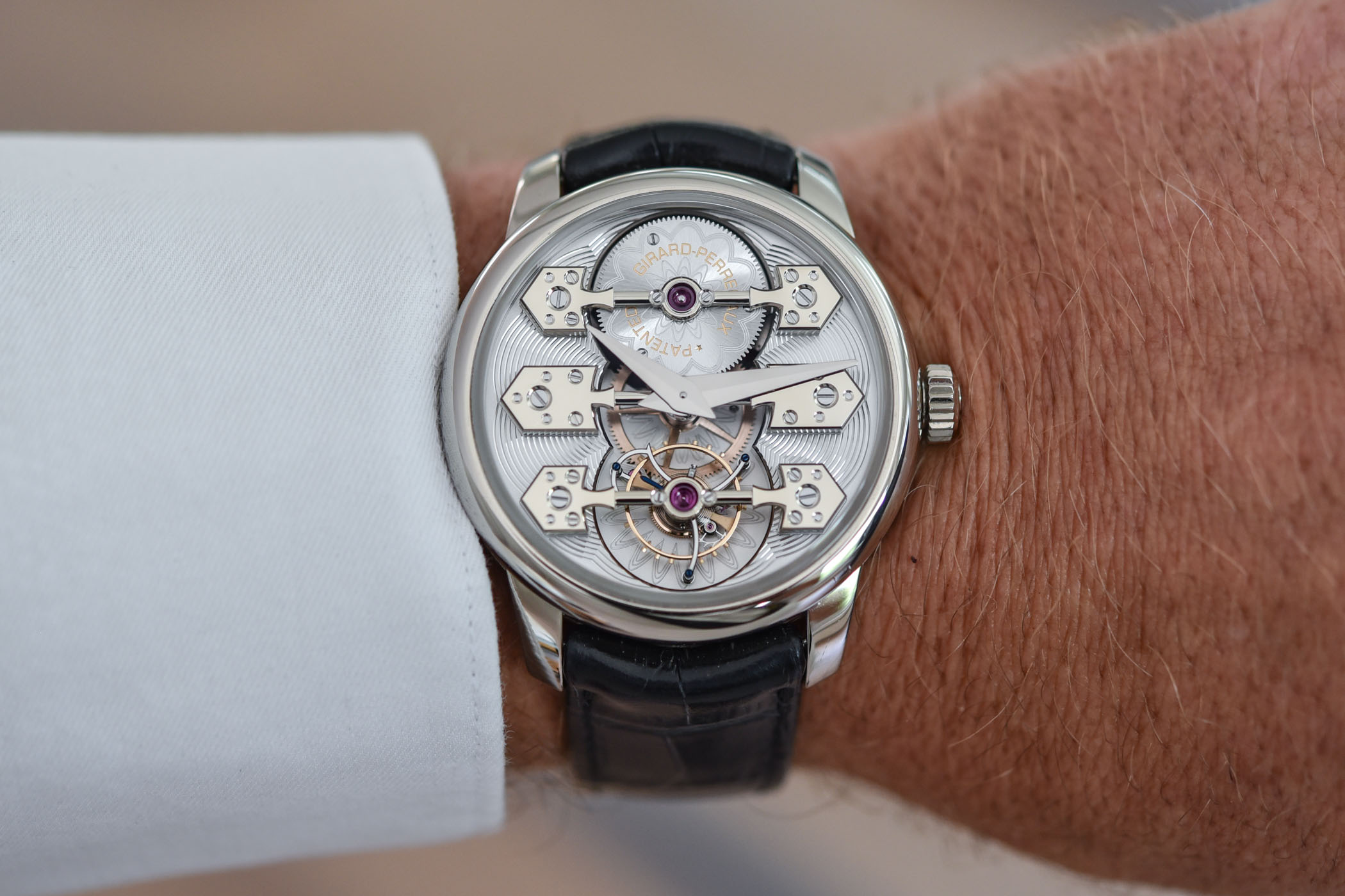 The Girard-Perregaux La Esmeralda Tourbillon with Three Gold Bridges is worn on a black alligator strap and fastened to the wrist with a white gold triple folding clasp. Price is set at CHF 212,000. For more information, please visit www.girard-perregaux.com.