When it comes to Tudor Watch, everybody knows and talks about the Black Bay – and in all fairness, rightfully so, as most BB editions deserve to be loved, especially the latest GMT or Fifty Eight versions. Yet, Tudor has other collections and there is a watch, which we believe deserves revisiting. One that is more important than you might think at first. Its name is the Tudor North Flag and today we take a closer look at this underestimated, underrated watch. 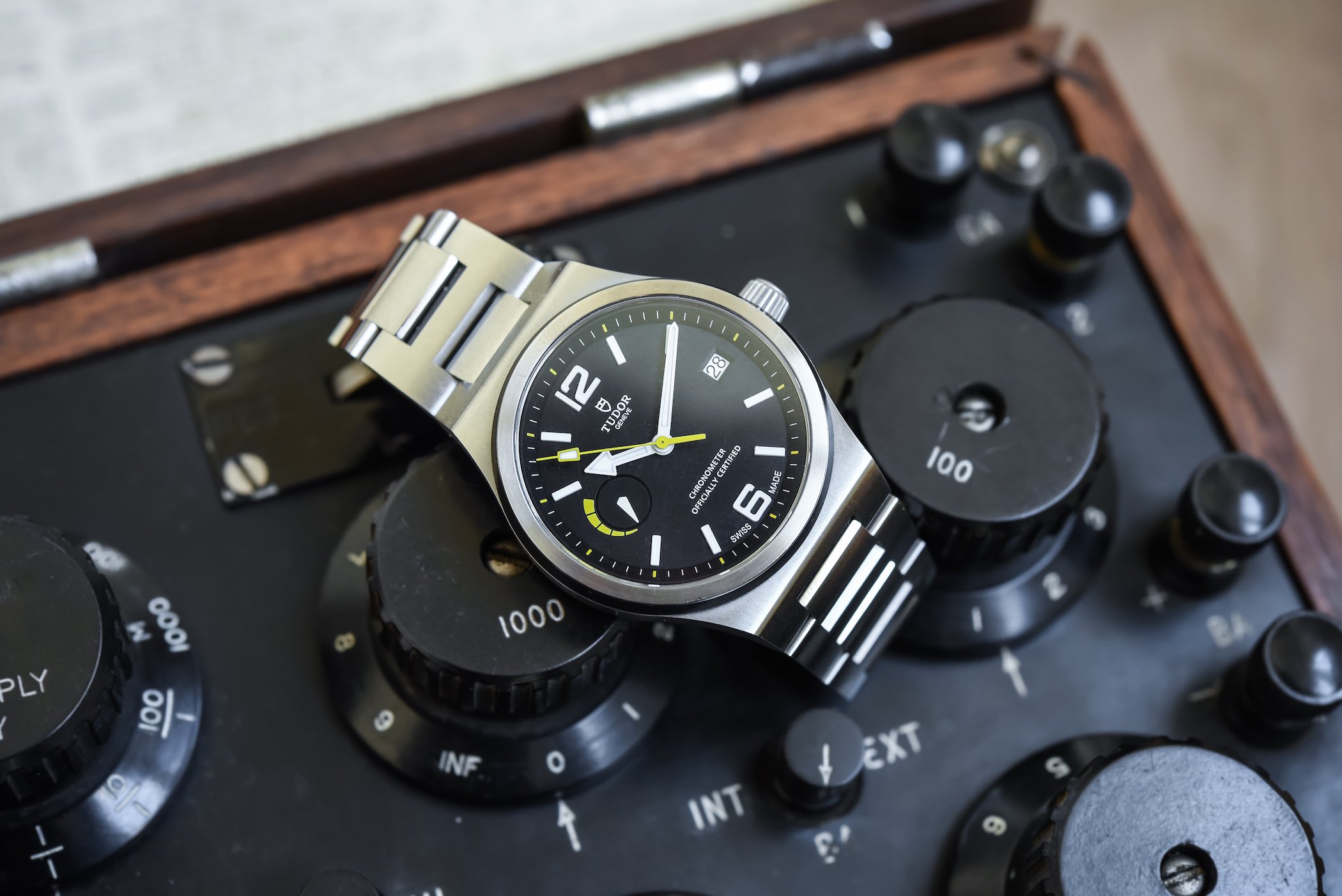 The Tudor North Flag isn’t a novelty – it was presented at Baselworld 2015 – and this is exactly why it is interesting to take a look back at this watch now that we’ve had time to understand what it meant for the brand and where it comes from. We’ve had time to digest this new watch and to look at it more objectively, not influenced by the reactions of our first impressions. Believe it or not, the North Flag is an important watch in Tudor’s history – just like the Black Bay was back in 2012. The North Flag is the watch that marked the transition for Tudor and yet, it is still a rather overlooked model, one that doesn’t spring to mind when looking at what Tudor has to offer.

Where does the Tudor North Flag come from?

The 1970s-inspired design – that is typical of the Tudor North Flag – didn’t materialise out of the blue. It has, as often with Tudor, a link with the brand’s heritage and is inspired by a model from the past. This watch, which can seem modern at first sight, adopts some of its design cues from the Ranger II. As we explained at the end of this article comparing the 1967 Tudor Ranger 7995/0 with its modern version, the Tudor Heritage Ranger 79910, back in the 1970s Tudor created an evolution of the Explorer-like Ranger, right in the middle of the incipient trend for luxury sports watches. 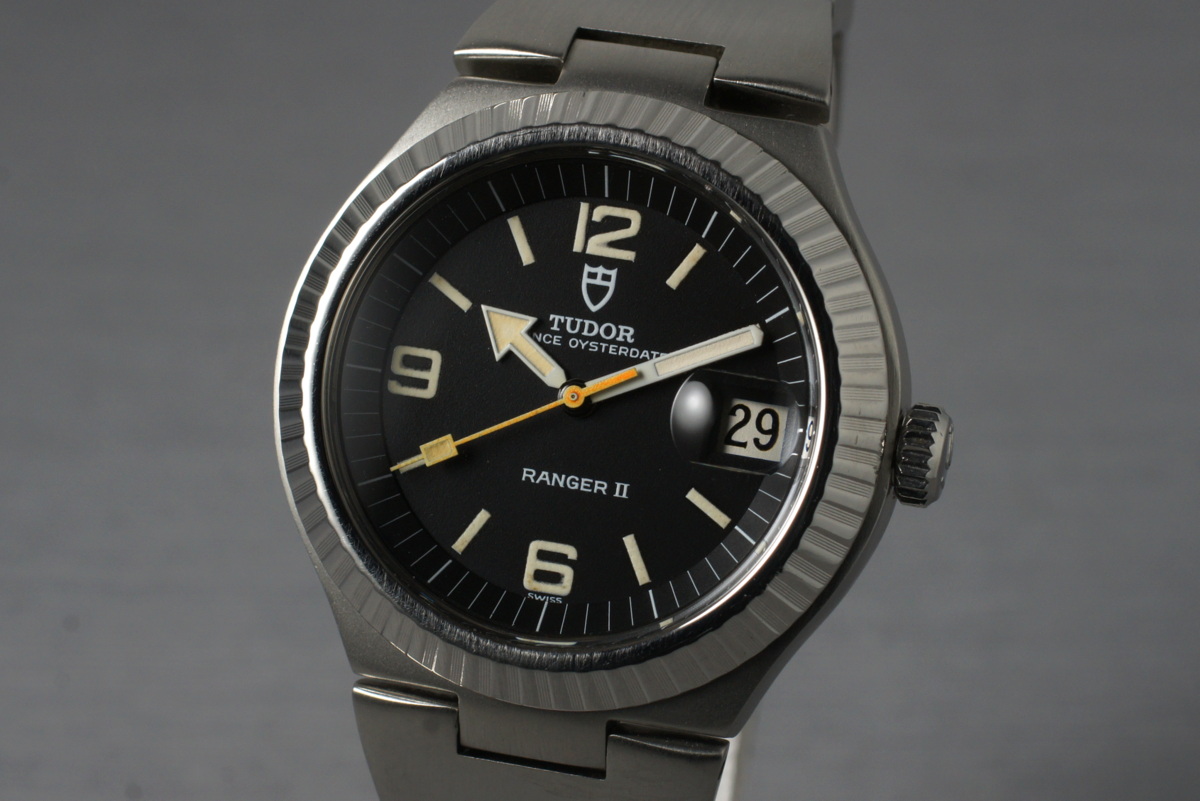 The Tudor Ranger II ref. 9111/0, the watch that partially inspired the design of the Tudor North Flag – Photo: HQ Milton

The Ranger II didn’t make history and this watch is admittedly not Tudor’s greatest success – visually and commercially. Yet, the reference 9111/0 is interesting as it features several iconic elements of the era – a tonneau-shaped case, a prominent bezel, an integrated metallic bracelet with large links, a more angular design all round, dial included. These features define the style of the modern North Flag, which in a way, make this watch Tudor’s take on the luxury sports watch. 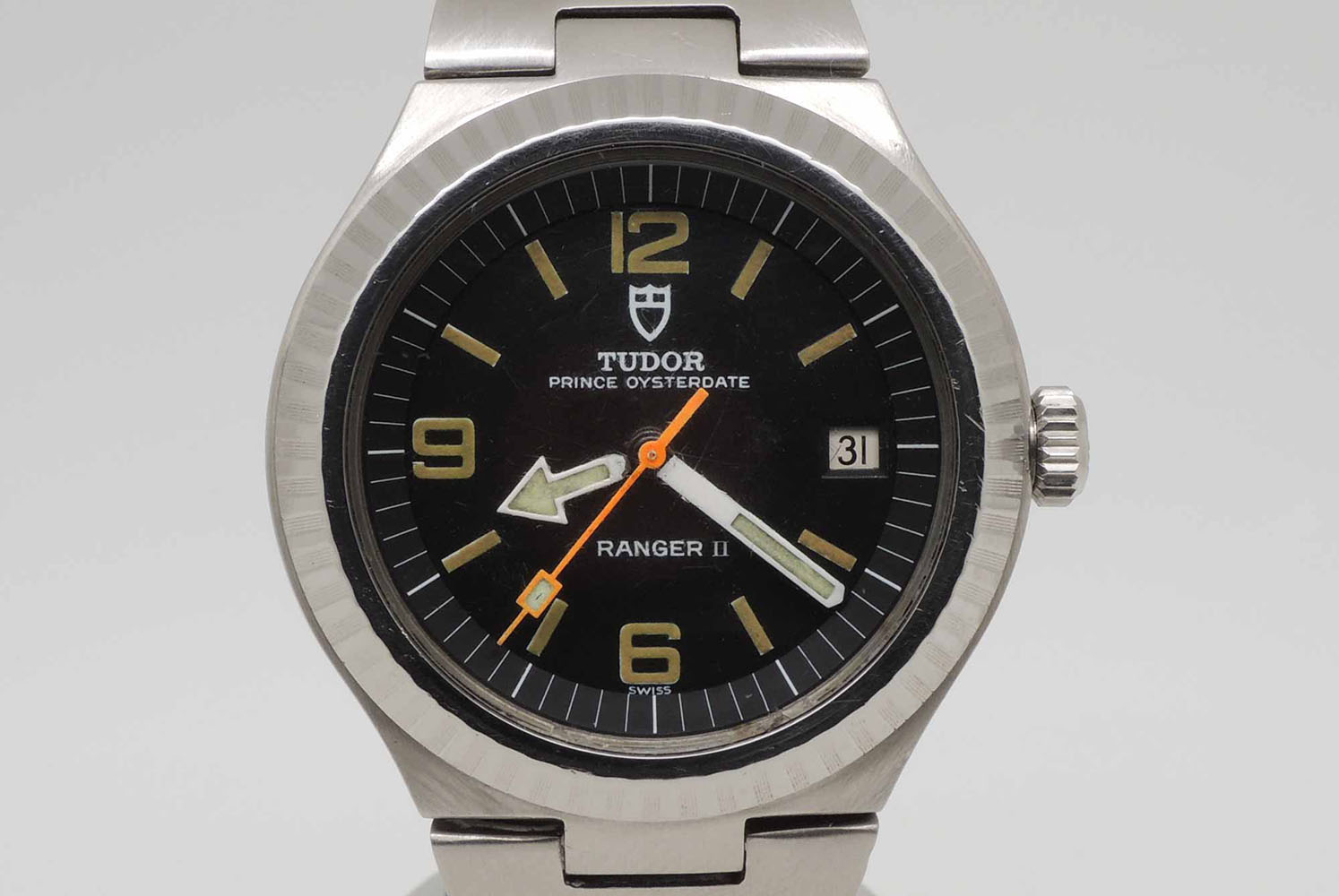 The dial of the Tudor Ranger II ref. 9111/0 is an obvious inspiration for the North Flag (hands, indices and colours are almost identical) – Photo: ancienne.es

When it comes to the link between the Ranger II and the North Flag, Tudor chose to focus only on the elements of style. Thus, the North Flag is a robust steel watch that is fitted on an integrated metal bracelet, sporting the same kind of hands (arrow hours and yellow syringe seconds) and numerals/indices of the Ranger II.

Side note: when Tudor launched the North Flag, there was almost no reference to this vintage inspiration, which might partially explain the difficulty we had in understanding and interpreting the context of this modern introduction. Now things have become more obvious to us, and we hope for you too.

The North Flag is an important watch, whether you like it or not. Its introduction back in 2015 positioned it as the first true novelty of the brand after years of dive watches (Pelagos and Black Bay) and vintage-inspired chronographs. Even though the reality is slightly different, as Tudor had launched various other watches in-between 2012 and 2015 (Ranger or Fast Rider), we had the impression of seeing something completely new (without making the link to the Ranger II) and this made the North Flag more important in our eyes and also rather disturbing. Yet, first impressions are usually wrong and now we can be more objective. 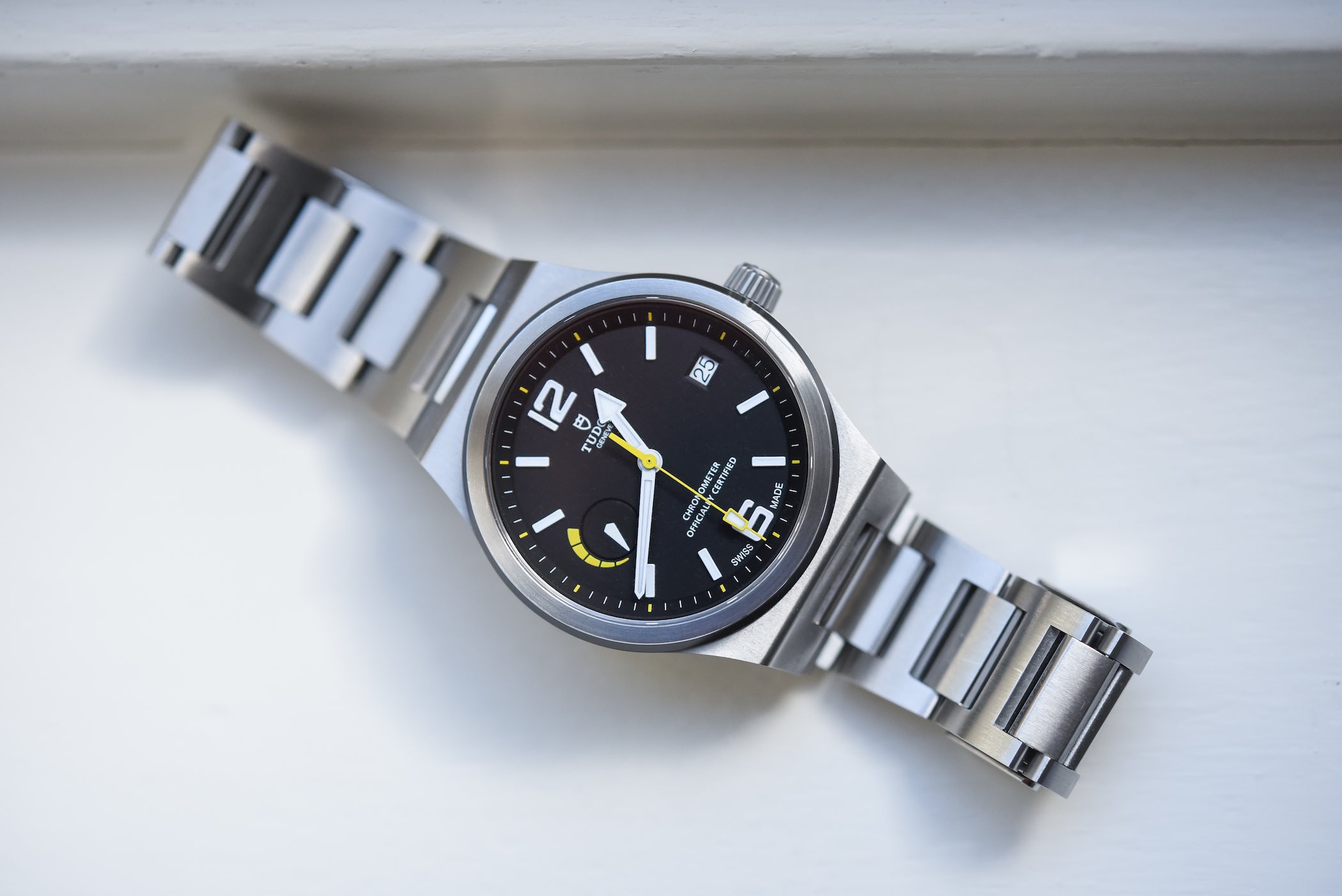 The North Flag plays on the trend of luxury sports watches (whose most emblematic representatives are the Royal Oak and the Nautilus). It certainly plays in a completely different league in terms of execution, prestige and thinness, but it bears many of the attributes that define a luxury sports watch. This is something that became more obvious after we had the chance to wear this watch.

What also makes the North Flag important is that this watch was the main vehicle for the introduction of Tudor’s first manufacture movement. Admittedly, the Pelagos also received this movement in 2015, but the North Flag proudly exposed it thanks to a see-through caseback – something that you rarely see with watches from the Rolex Group. If there was a watch to promote Tudor’s new watchmaking expertise, it was the North Flag. Period! 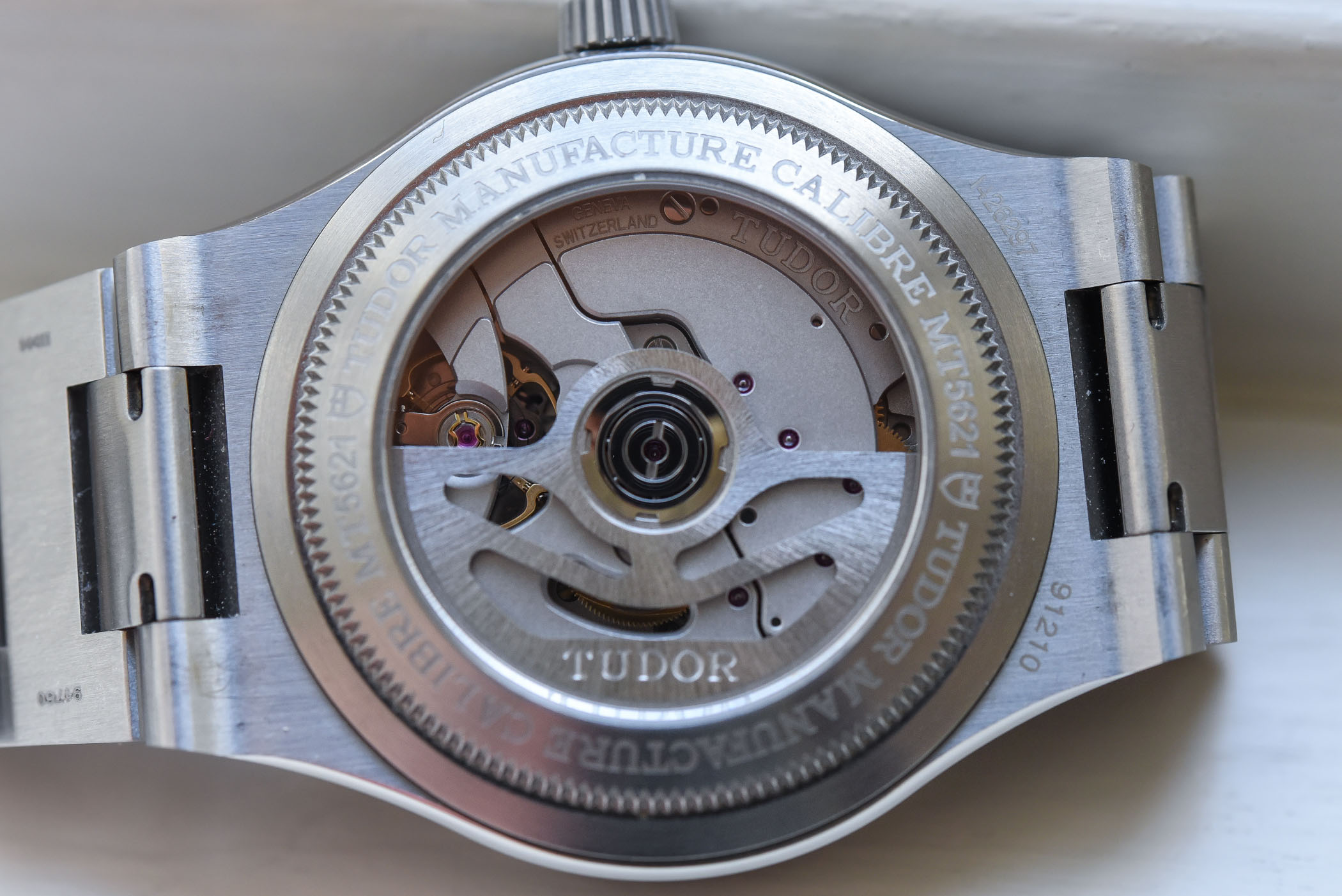 Before this cornerstone 2015 collection, Tudor had always relied on out-sourced movements. It was one of the key elements in the brand’s policy of affordable watches. While Rolex has been using proprietary or in-house movements for decades, Tudor relied heavily on ETA, even for the first generation of Black Bay and Pelagos watches. Moving from external sourcing to internal production was a huge step forward and the North Flag was meant to show it – even more considering that it was one of the few watches of the brand to include a complication (a power reserve indicator in this case).

What ticks inside the North Flag is a rather impressive movement if you consider the retail price of Tudor’s watches and the relatively low price increase compared to ETA-powered timepieces. Compared to these out-sourced movements, improvements are noticeable. First, it comes with a robust power reserve of 70 hours (almost 3 days, enough to leave the watch on a nightstand for a weekend and put it back on Monday morning still running). Secondly, it features an anti-magnetic spiral, made of silicon, and has a balance wheel with variable inertia screws (that vibrates at 28,800vph). Finally, it is chronometer, certified by COSC. Resemblances with modern Rolex movements from the 32xx series are quite obvious: same power reserve, same transversal cock bridge, same overall layout for the bridges… No hard feelings here as having Rolex overlooking the development of a movement should be reassuring.

Visible through the caseback, this movement shows limited decoration and feels as utilitarian as the watches manufactured by Tudor. This tool-ish look also keeps costs down, with no influence on the specifications themselves. The bridges and plates are matte finished (sand-blasted) with similarly decorated bevels (non-polished). Only the rotor shows a sunray-brushed pattern to give a bit of life to this otherwise plain and simple looking calibre MT5621. On a daily basis, however, Tudor’s movement is a great companion: easy to operate, with stop-seconds function and instantaneous date, pleasant to wind, precise and apparently built to resist the tough life these watches are made to withstand. In a nutshell – a purpose-built engine.

Living with the Tudor North Flag

Let’s get back to the design of the Tudor North Flag and the affirmation we made that the North Flag could be Tudor’s vision of a luxury sports watch… Outspoken, maybe? Well, yes and no. In fact, the North Flag is closer to the concept than you might think. It might not have the specifications to enter the category – too thick, too utilitarian, too cheap perhaps – but if you look closely, the North Flag 1. is a 1970s-inspired watch 2. has an integrated steel bracelet with large links that taper to the buckle 3. has a shaped case with integrated lugs 4. has a raised bezel with a different shape than the case and, 5. is sporty and robust. 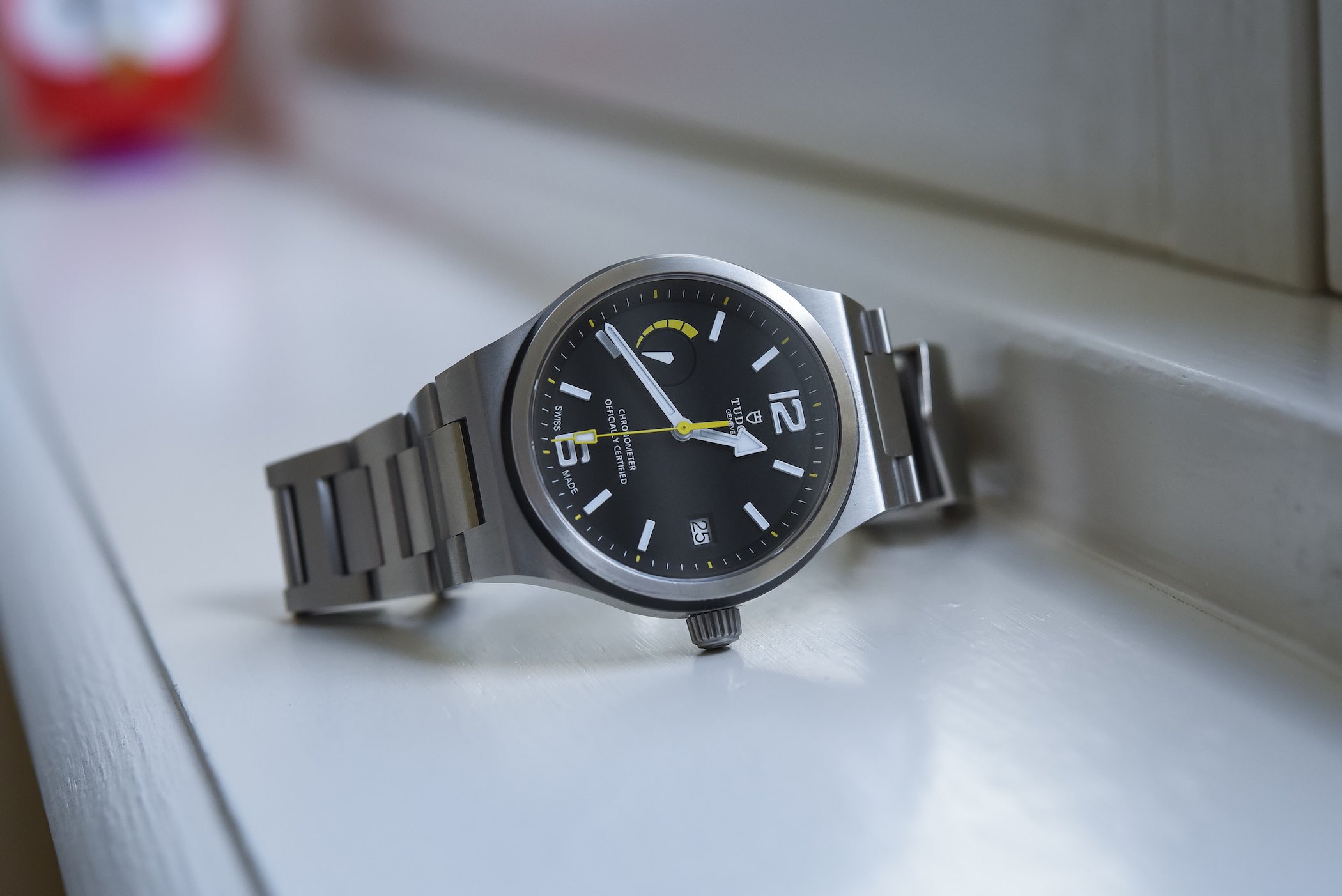 So what is it? It is a more modern and sportier approach of the concept, just like the Genta-inspired IWC Ingenieur. It wasn’t really obvious to us when the watch was launched, but after long discussions at the MONOCHROME editorial meetings, we realised this fact – and that changed our perception of the watch in a positive way. This was even truer on the version we had for this review, even though the leather strap version also cultivates that 1970s feel. If the Black Bay models are easy to understand – with their familiar, cool, vintage Submariner inspiration – the North Flag needs more analysis to be perfectly understood. It is more complex but no less pleasant. 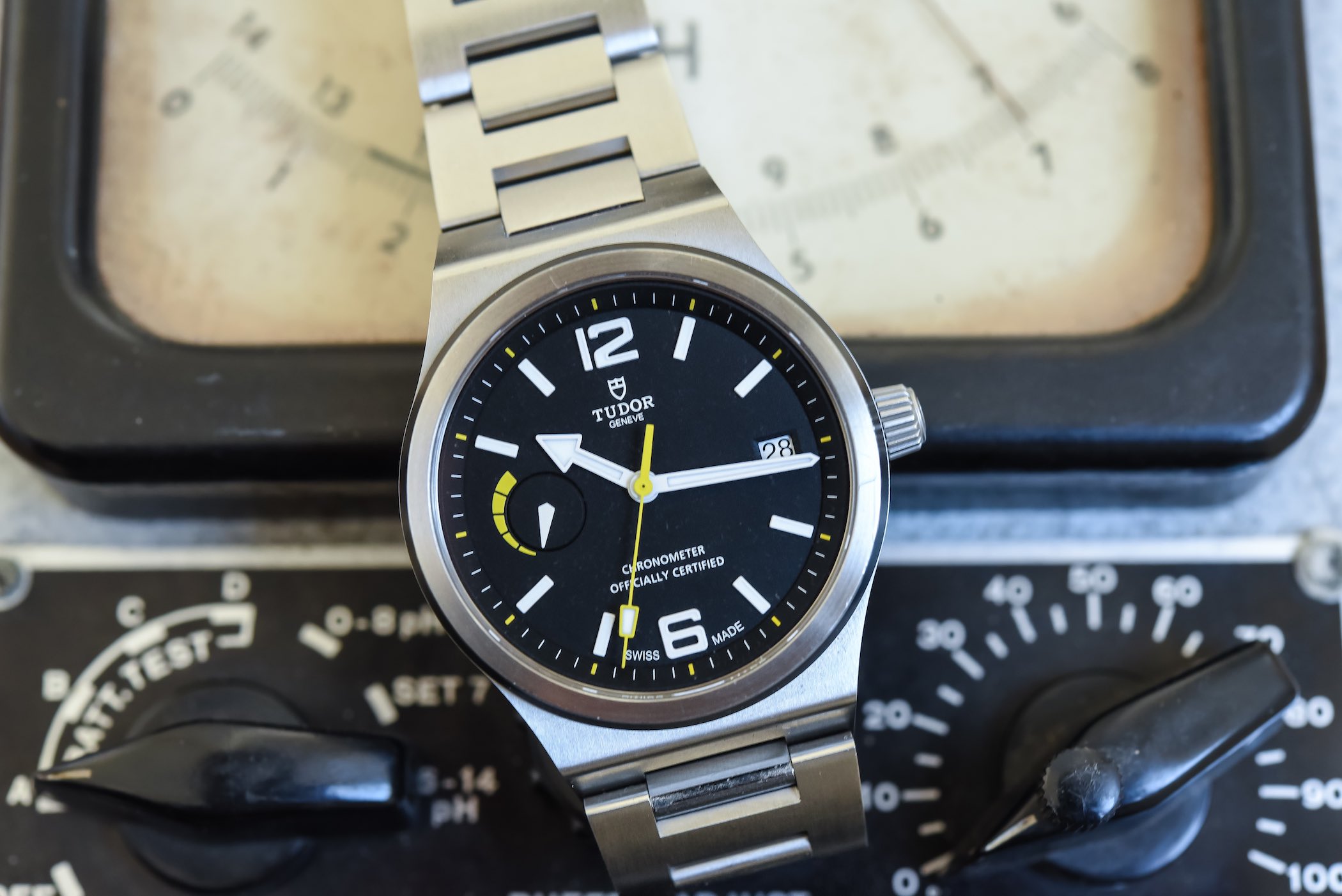 Back to the watch itself, the case of the North Flag should be considered differently once the watch is strapped on the wrist. On paper, the dimensions are reasonable – 40mm in diameter x 13.4mm height – however, they improve when worn. The use of an integrated case/bracelet architecture allows for a more compact watch, with almost no lugs that protrude from the wrist – consider that Frank played wrist model here and he has a 19cm wrist. On my 17.5cm wrist, comfort was great too.

Even though it can’t be classified as an “ultra-thin”, the North Flag feels thinner in real life than on paper, due to the combination of a rather thin central container and a raised bezel – and the matte black ceramic insert helps to make the profile visually thinner (and in a way, reminds us of certain bold luxury sport watches such as the ROO – we’ve seen worse references). The final touch is the oblique shape of the lug module, which follows the curvature of the bracelet perfectly… This is another visual trick to make this watch more compact than it is on paper. 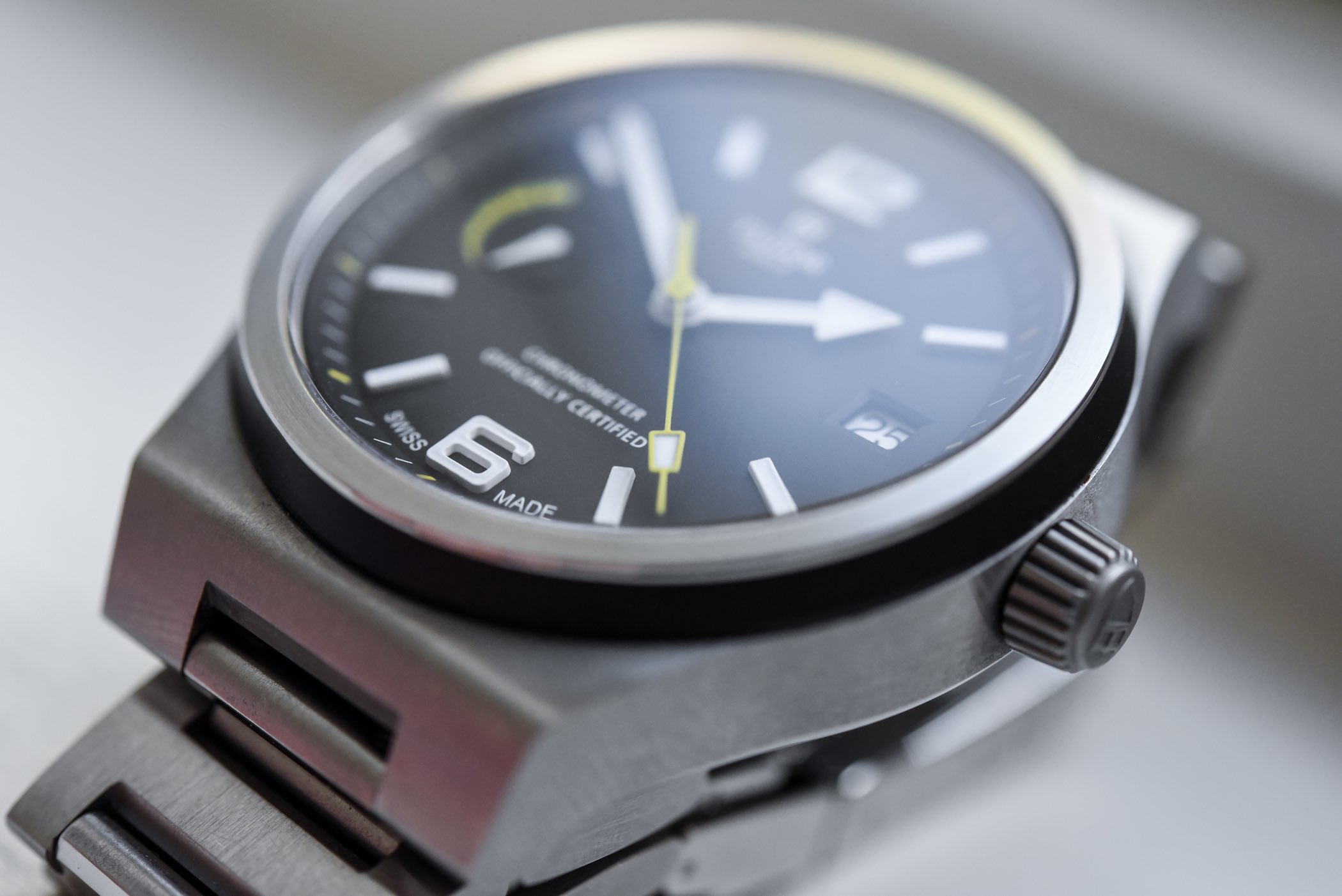 What the North Flag lacks in terms of luxury is compensated by its ruggedness – 100m water-resistance, solid bracelet, well-protected case/bezel. As always with Tudor, the execution is impressive considering the price. The assembly is precise and the surfaces are perfectly finished. We had a much better experience with this commercial model than when handling the pre-production models at Baselworld 2015 – most angles of the case were ultra-sharp and not really pleasant to touch, something that has since been solved.

As for the dial, this is where the North Flag can get disruptive. It is bold, with bright accents, very sporty and far from what the brand did in the years before launching this watch. Yet, it fits the overall 1970s sports watch concept. The matte black dial has great contrast and legibility is fantastic. The dial of the North Flag is much more detailed when observed closely. The highly raised numerals and indices are particularly satisfying and perfectly match the hands. The yellow accents on the power reserve and the seconds hand add a nice “funky” touch to the package. Finally… The date! Usually not a big fan of the date, I must say that here its presence makes sense and doesn’t disturb.

I have to confess that I wasn’t the biggest fan of the Tudor North Flag when it was introduced – I know Frank had identical feelings about this watch. First impressions can be wrong and it was the case for this watch. This long-term review on the wrist gave us the opportunity to look at this watch with a different eye, from another angle and to better understand what Tudor wanted to do with it. This watch is much more satisfying on the wrist than I thought it would be. 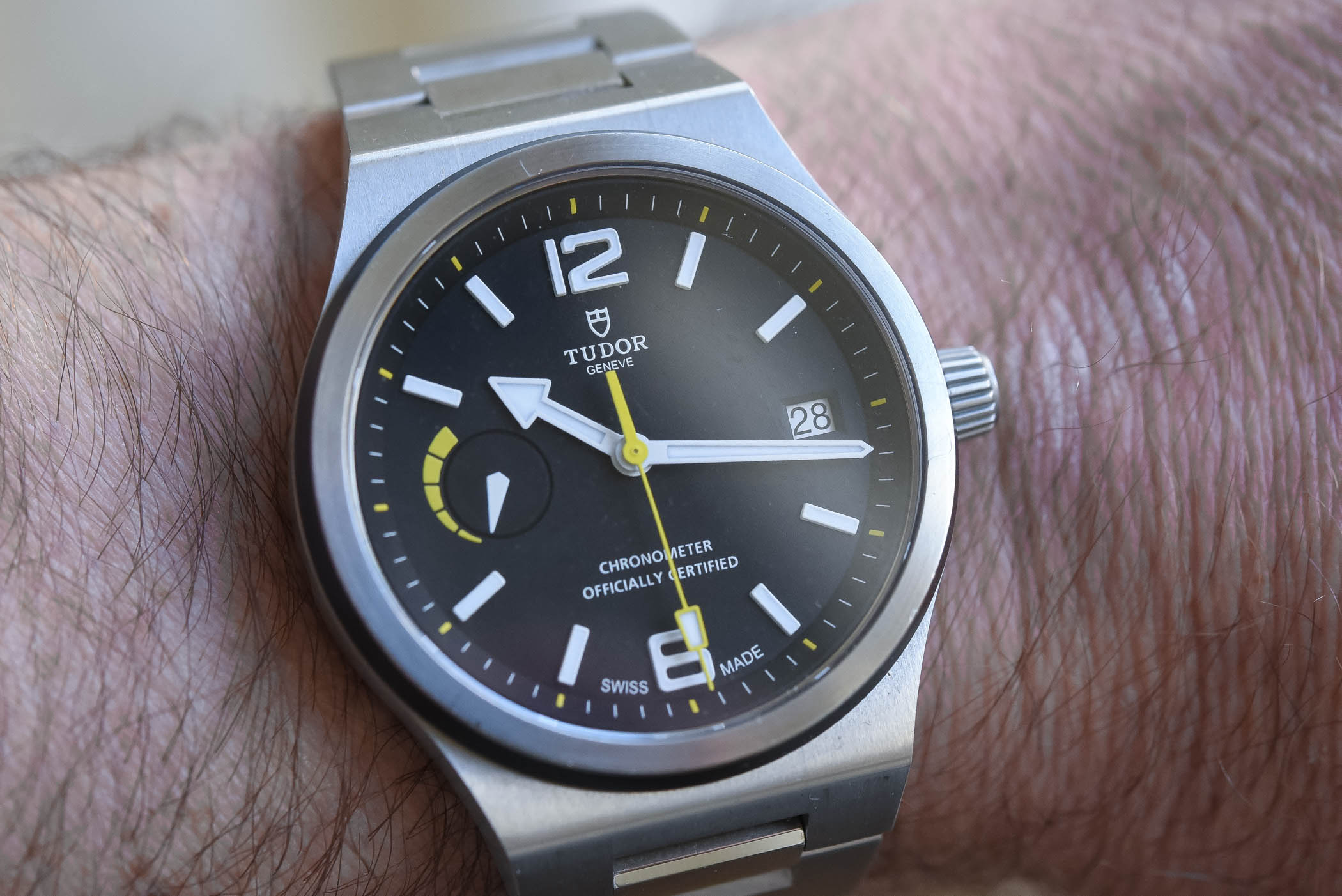 Now, I also understand that this watch has less the “love-at-first-sight” factor than a Black Bay can have. It is much more segmenting and doesn’t have that ultra-familiar (and thus ultra-reassuring) look of these vintage-inspired dive watches. Yet, the brand can’t only live on the BB and the North Flag is different but on par with what you can expect from a Tudor. What surprises me is that no evolutions have been presented yet, for instance with a different dial or a different display – a Dual-Time version would be quite relevant.