Since its very creation, Bell & Ross has focused on military forces and, as its preferred theme, pilots. From the earliest days of the watches manufactured by Sinn to the present collections, pilots have been the central point of interest of the brand in its core collection. But “pilot” is a wide definition. The needs of a jet fighter officer aren’t the same as an airline commander. And so are the needs of a frequent traveller. In this context, there’s one definitive function, the GMT complication, the one that helps you track time-zones. And Bell & Ross is no stranger to the GMT watch. And today, we’ll try to understand how it works by looking at 3 watches from the Paris-based brand. 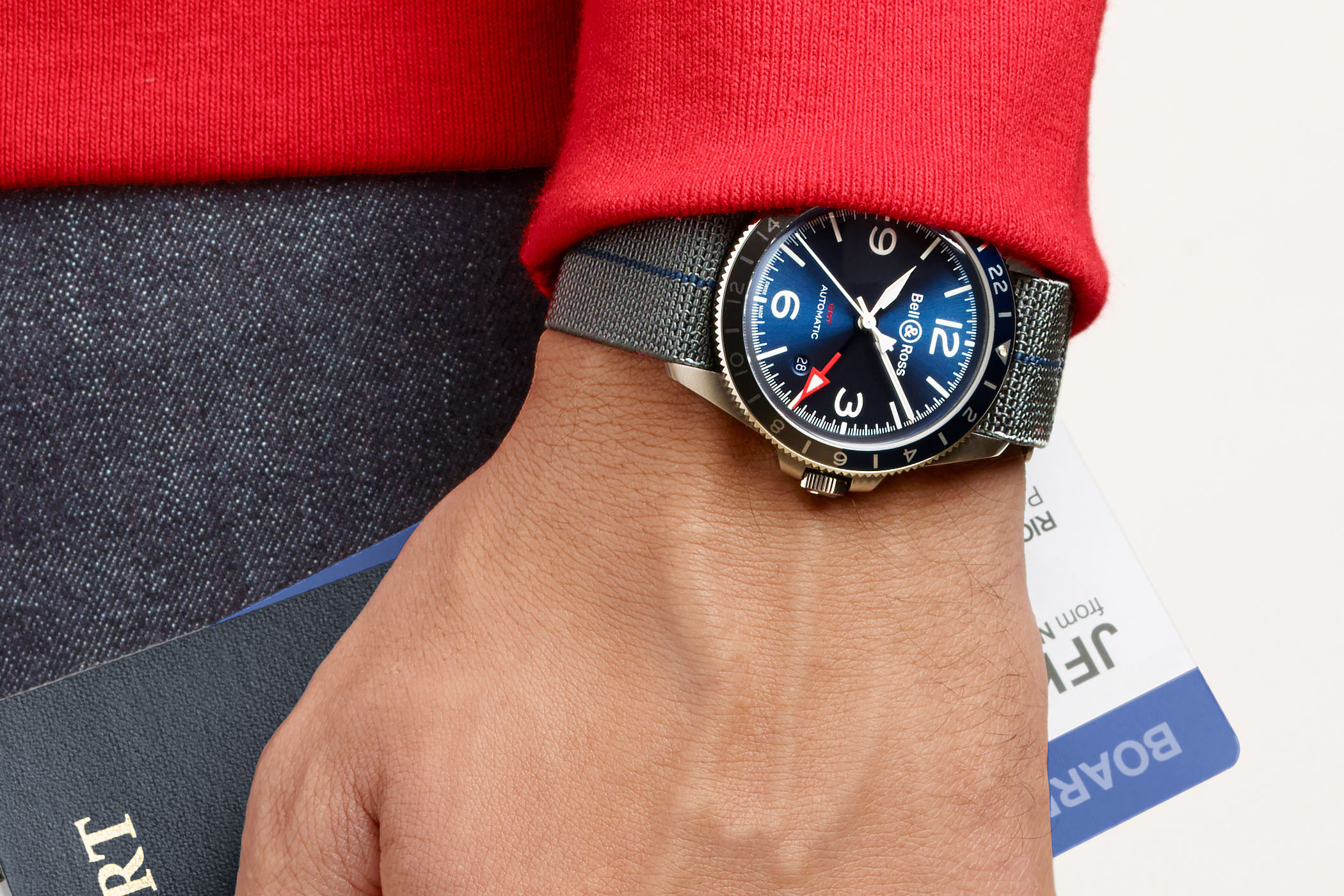 The days of military watches at Bell & Ross aren’t gone, however, the brand had to adapt to the real world and, without losing its origins of military-inspired and pilot’s watches, it started to offer watches for the urban gentleman. The pinnacle of this vision has been launched last year, with the BR05, a watch that evokes the original design codes of the brand, yet without a military vocation anymore. Still, the collection is still packed with utilitarian timepieces and the GMT function is well represented.

The original concept of the pilot’s watch is tightly linked to the needs of military forces. From the earliest watch, the 1904 Cartier Santos, to more advanced and purpose-built watches during WWII, pilot’s watches were basically utilitarian field watches, answering the needs of military officers. However, after WWII, the situation changed as civilian aviation massively emerged. And with the development of business and leisure travels, people started to cross time zones… something that humanity rarely did before. 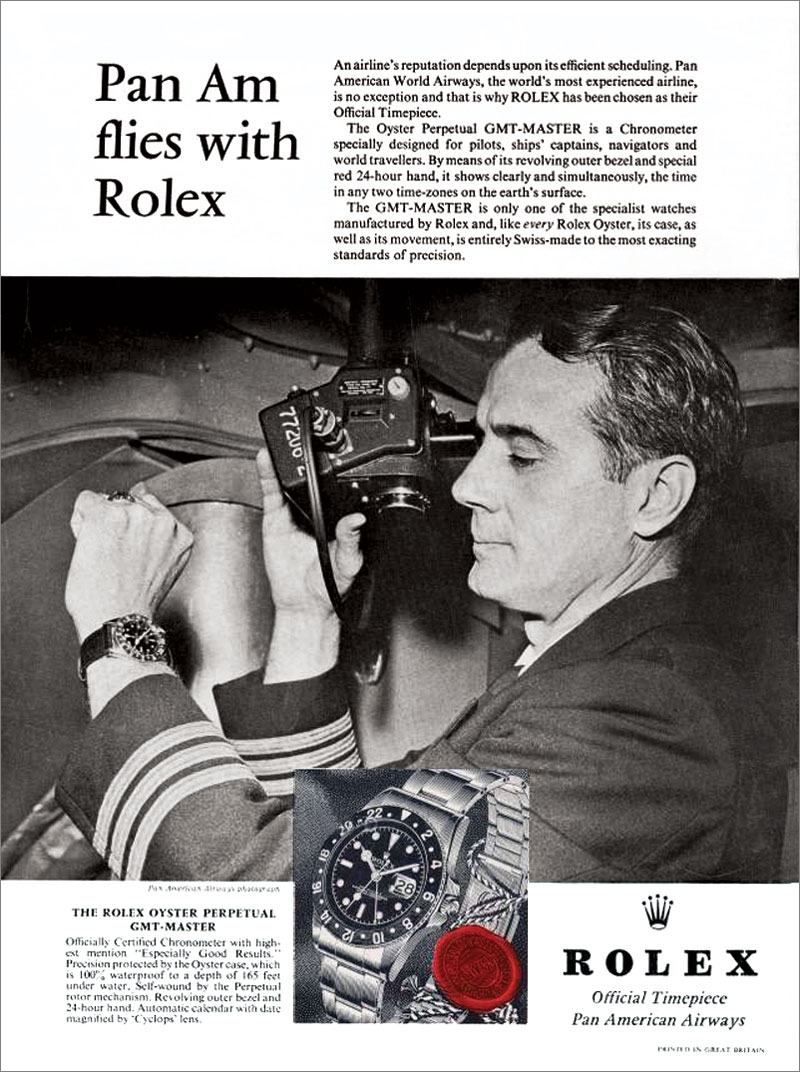 Civilian pilots are prone to cross borders and, coincidentally, to cross time-zones. As such, being able to track the local time as well as a second time-zone, for instance, the time it is at home or at your company’s headquarter, found out to be extremely practical. This is when the first GMT watches came to the market, civilian watches developed for civilian pilots. In 1954, the GMT-Master was born, dictated by the needs of PanAm pilots, and defined the concept of the GMT watch for the decades to come. And this kind of watch will soon be adopted by frequent travellers and people working in an international environment. To this day, as we often say at MONOCHROME, the GMT complication is certainly the most useful and most realistic function of a watch, especially our 21st-century environment. 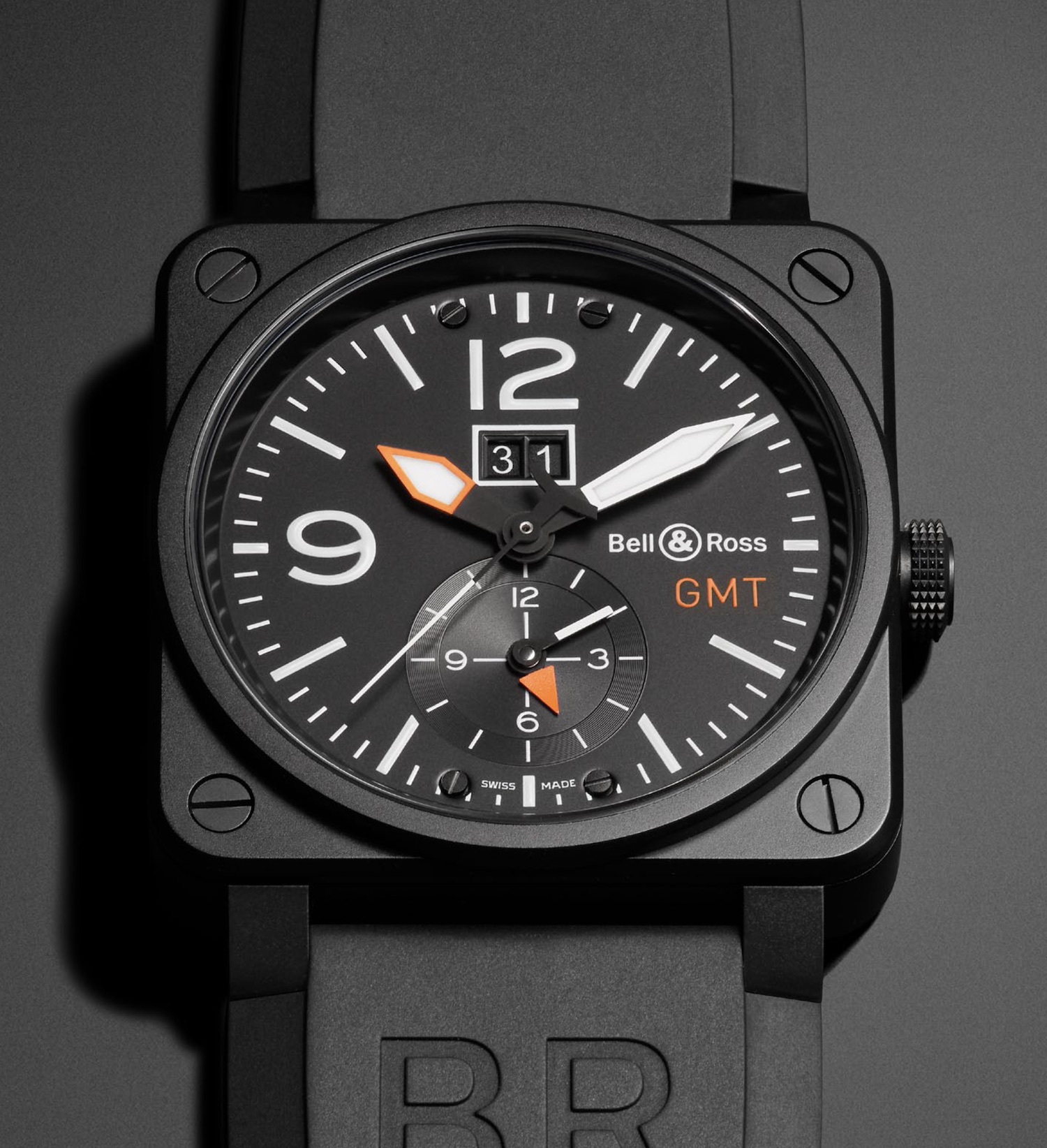 Bell & Ross, with its focus on pilot’s watches, soon added this function to its catalogue. The development of the BR 01 and BR 03 collections, with their iconic shape inspired by military aviation, made it clear that the GMT function was a necessity. Since the late 2000s, Bell & Ross always had this complication in its collection – such as the BR 03-51 GMT above. 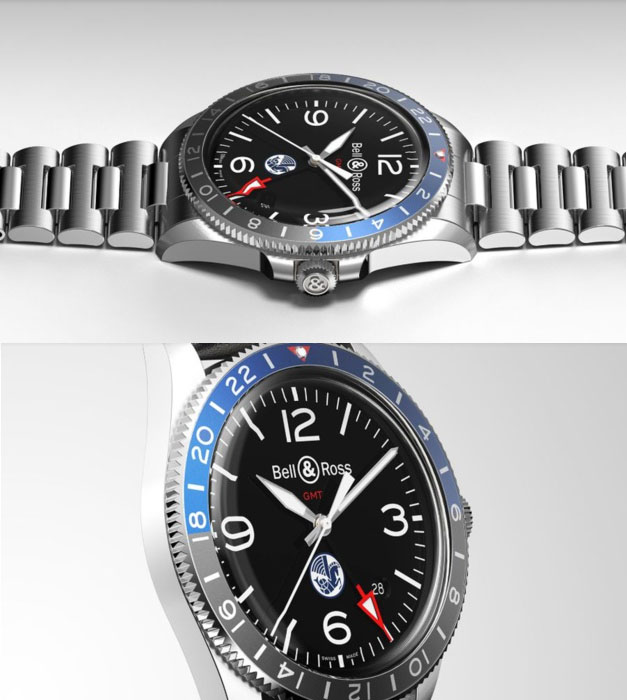 The GMT Bell & Ross made for Air France

Reinforcing its legitimacy in this field, the brand even created recently a watch especially for Air France employees, based on the BR V2-93… And what else could it be than a GMT watch? The BR V2-93 GMT A320 AF was celebrating the 30th anniversary of the Airbus A320, the cornerstone of the Air France fleet, and produced in 500 pieces only for employees of the French airline.

How Does the GMT Function work?

Before we look at the GMT collection by Bell & Ross, we thought it would be necessary to make a technical reminder about GMT watches and how they actually work in the real world, by showing you two of the current watches available, the BR 03-93 GMT and the BR V2-93 GMT.

First of all, it has to be noted that mostly two types of GMT watches exist. If the final result in terms of design is the same, as both rely on a classic combination of 4 hands – local hours, home hours, minutes and seconds – the main difference is in the way you can adjust the additional time zone and the local time. Higher-end watches, such as Omega, Rolex or Grand Seiko, have made the choice of an adjustment of the local time by one-hour increments – a more complex solution technically-speaking that also proves practical when landing. 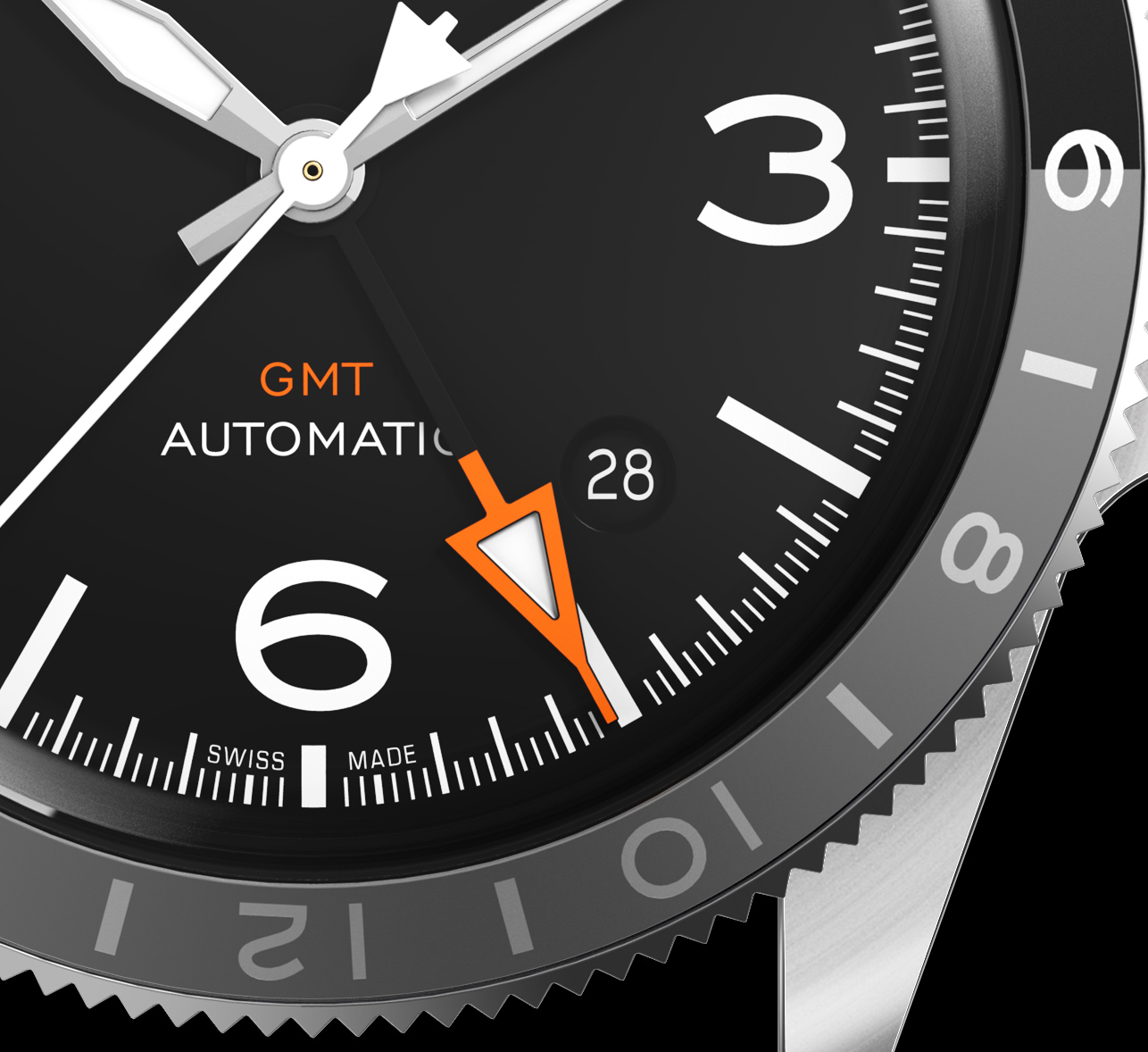 Most of the GMT watches, those equipped with ETA or Sellita movements, have chosen for a mechanically slightly simpler solution, where the GMT hand is adjusted by one-hour increments. A solution that proves practical in a business environment, as the local time isn’t affected and that requires an extra step to be executed when travelling. Let’s look at this question with the BR 03-93 GMT: 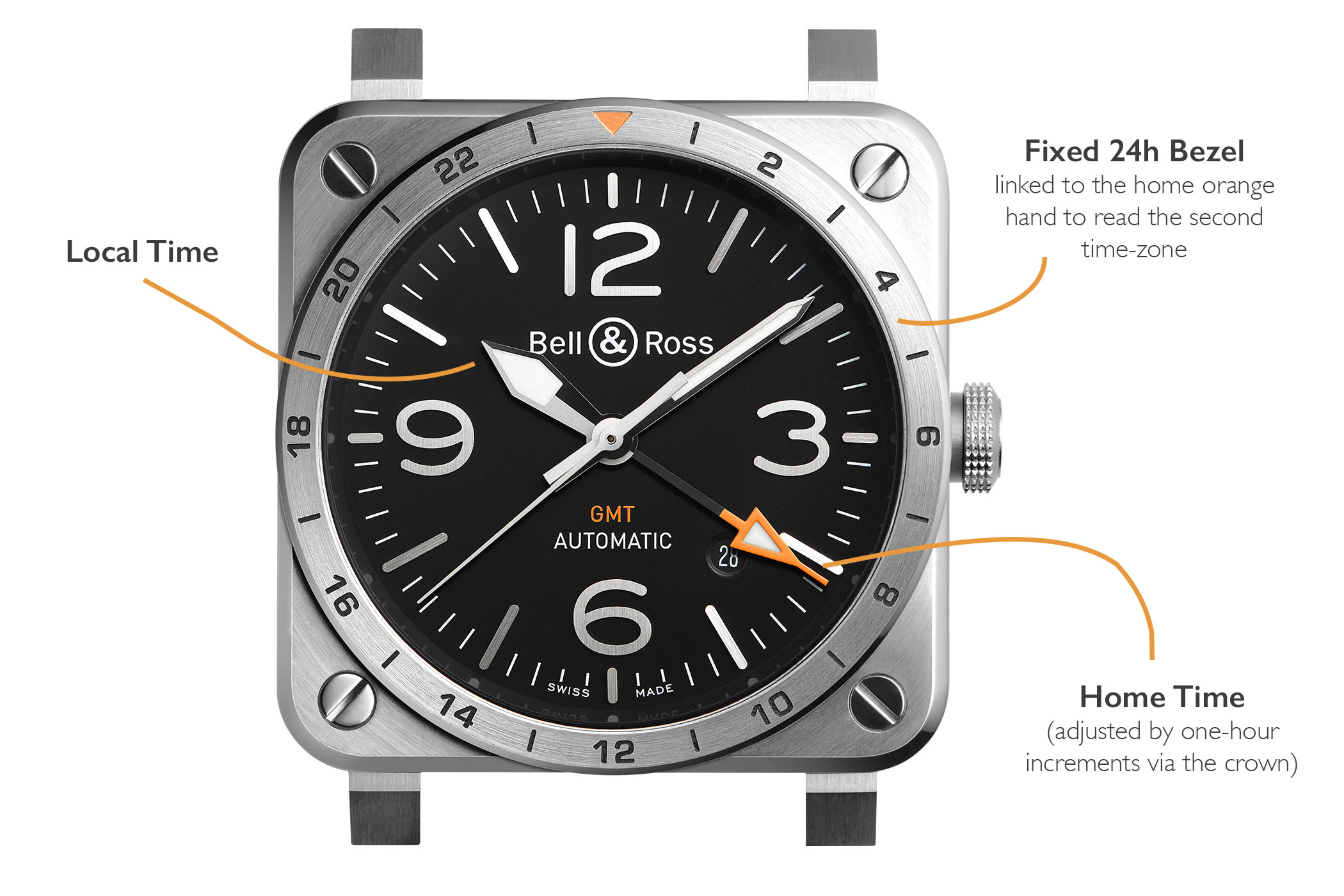 Let’s explore the basics of a GMT watch. Like most watches, it features three main hands for the hours, the minutes and the seconds. The main specificity is the presence of an additional hand, here highlighted in orange, displaying a second time-zone. On the contrary to the standard hours hand, it runs on a 24-hour basis, making a full revolution around the dial once a day. It is read thanks to the 24-hour scale engraved on the bezel, here fixed.

How to use this additional hand. It can have 3 purposes 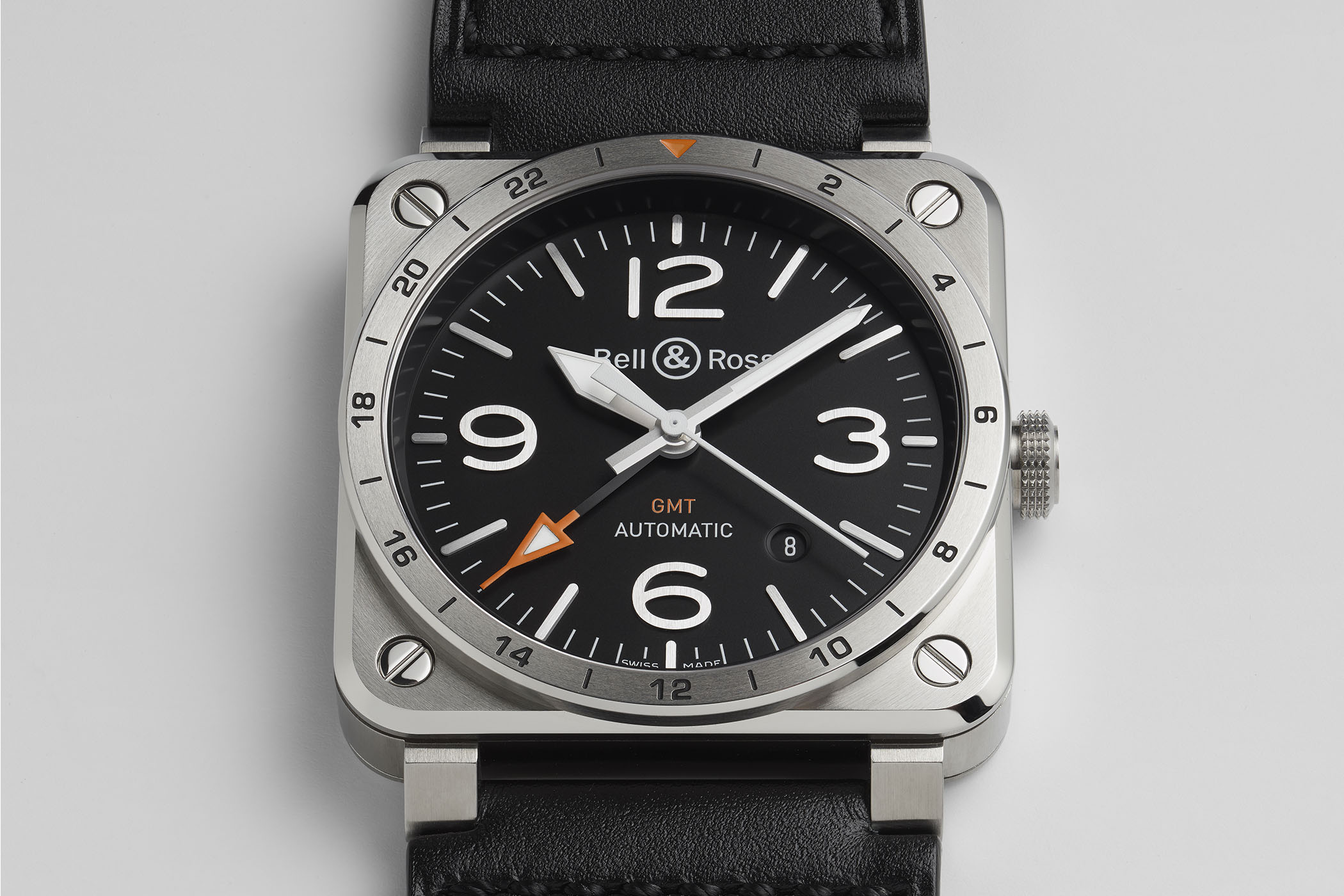 On this example, the local time is set at 10:10 AM and the additional 24-hour hand indicates an additional time-zone, the home time for instance, which 5 hours ahead at 3:10 PM

How to concretely adjust a GMT watch? When at home or at the office, the second position of the crown is used to adjust the GMT hand by one-hour increments. You thus select the desired time-zone – this is done without affecting timekeeping, as the movement continues to run normally. When travelling, 2 steps will be required. First, pull off the crown to the third position and adjust the main hands to the local time. Then, bring the crown back in the second position and adjust the GMT hand to the home time. As such, you now can track the time of the place you actually are and the time it is at home.

Some watches even add the possibility to track a third time-zone, thanks to a rotating bezel. While the mechanics are identical, rotating the bezel adds another function to the watch. This is the case with the BR V2-93 GMT: 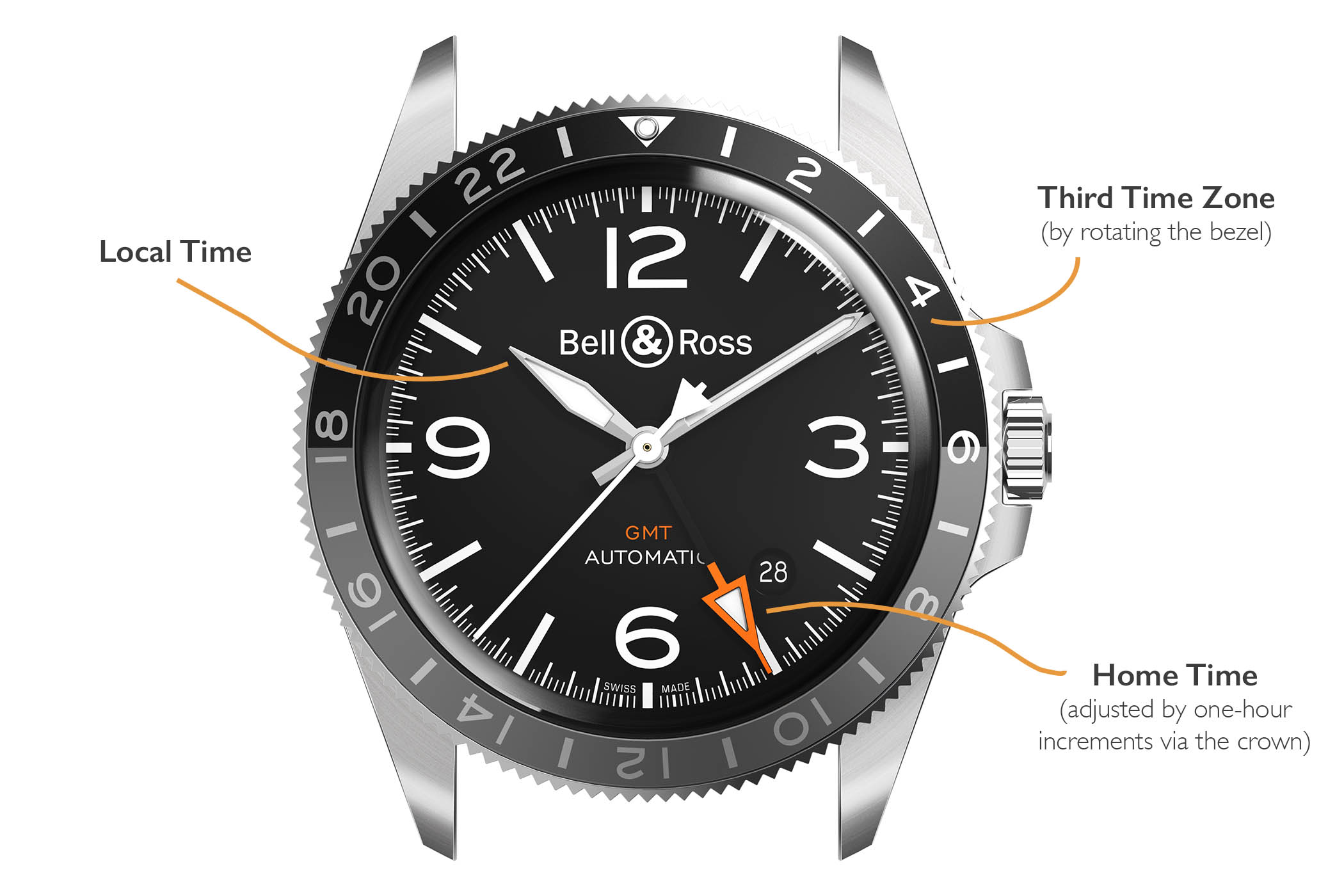 For this model, which has been introduced in 2018 and later followed by a blue version, features a bi-directional bezel with a 24-hour scale. The idea with such bezels, also found on other watches (GMT-Master, Seamaster PO) is to be able to calculate the time in most time-zones around the globe. As long as you know the time difference, you can track the time everywhere. You just need to rotate the bezel by the desired number clicks – 1 click = 1 hour (with 24 clicks) – and the GMT hand will thus indicate the time you’re searching for.

On the photo on the left, the watch is in “standard” mode, with the 24-hour GMT hand used as a day-night indicator – pointing 10 AM. Let’s take a concrete example. You’re in New York and it’s 10:10. If you want to track the time in Los Angeles, which is 3 hours back, you just have to rotate the bezel by 3 increments, and then the GMT hand will indicate 7 AM, the time it actually is in LA.

The GMT Collection by Bell & Ross

There have been multiple watches at Bell & Ross equipped with a GMT function in the past, such as the BR 03-51, featuring a large date and the additional time-zone in a sub-dial, or the Vintage BR 123, the predecessor to the current BR V2 collection, which featured a central GMT hand and a fixed bezel engraved with a 24-hour scale. 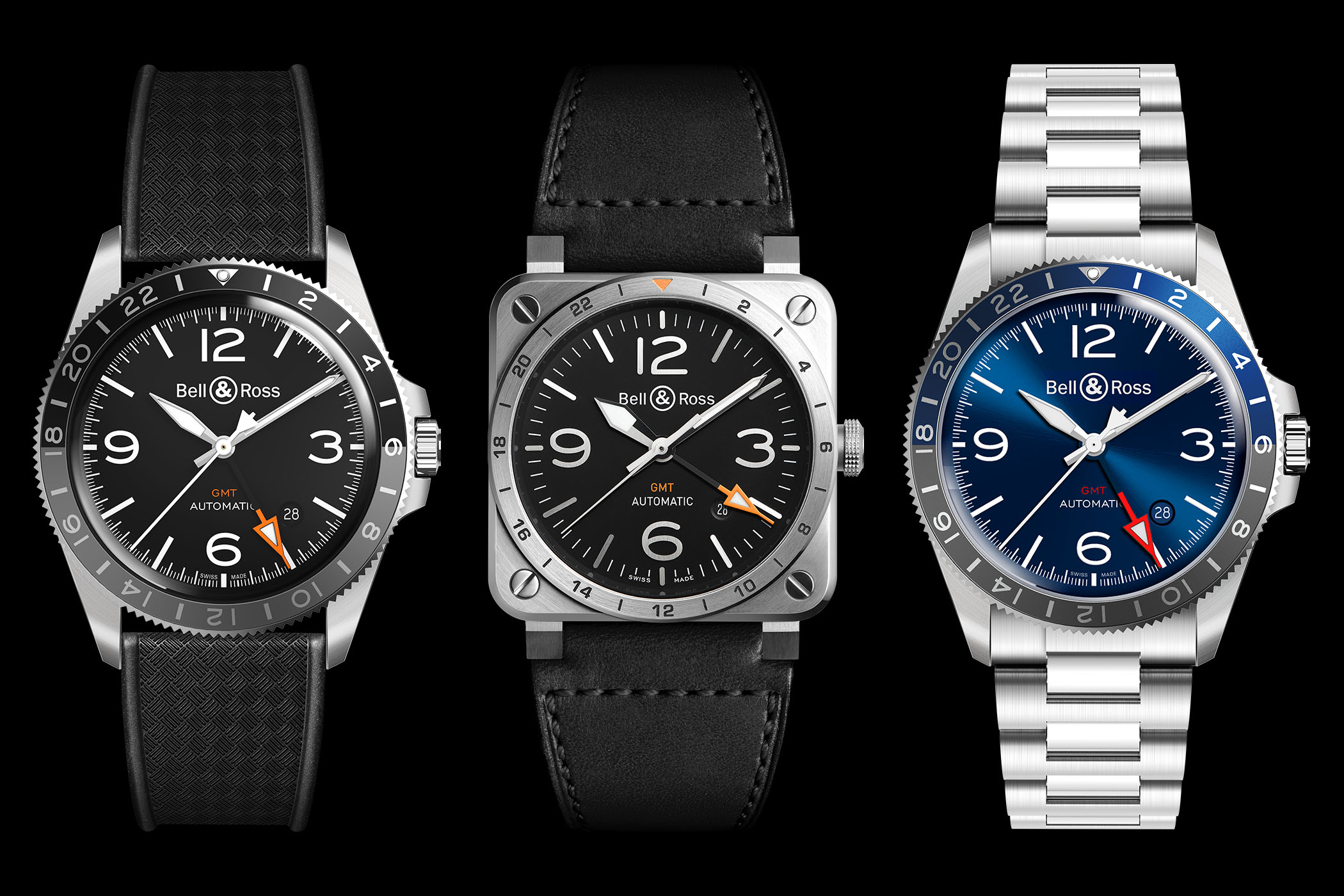 Today, Bell & Ross continues to explore the concept of watches made for civilian pilots and frequent travellers, with 3 different watches. One is an evolution of the classic “circle within a square” watch, which has been urbanized compared to some of the most military-oriented pieces – to stay in line with the civilian vocation of this complication. The two other models are derived from the Vintage V2 watch. Once again, the design codes are more urban than some of the field-oriented editions of this watch. 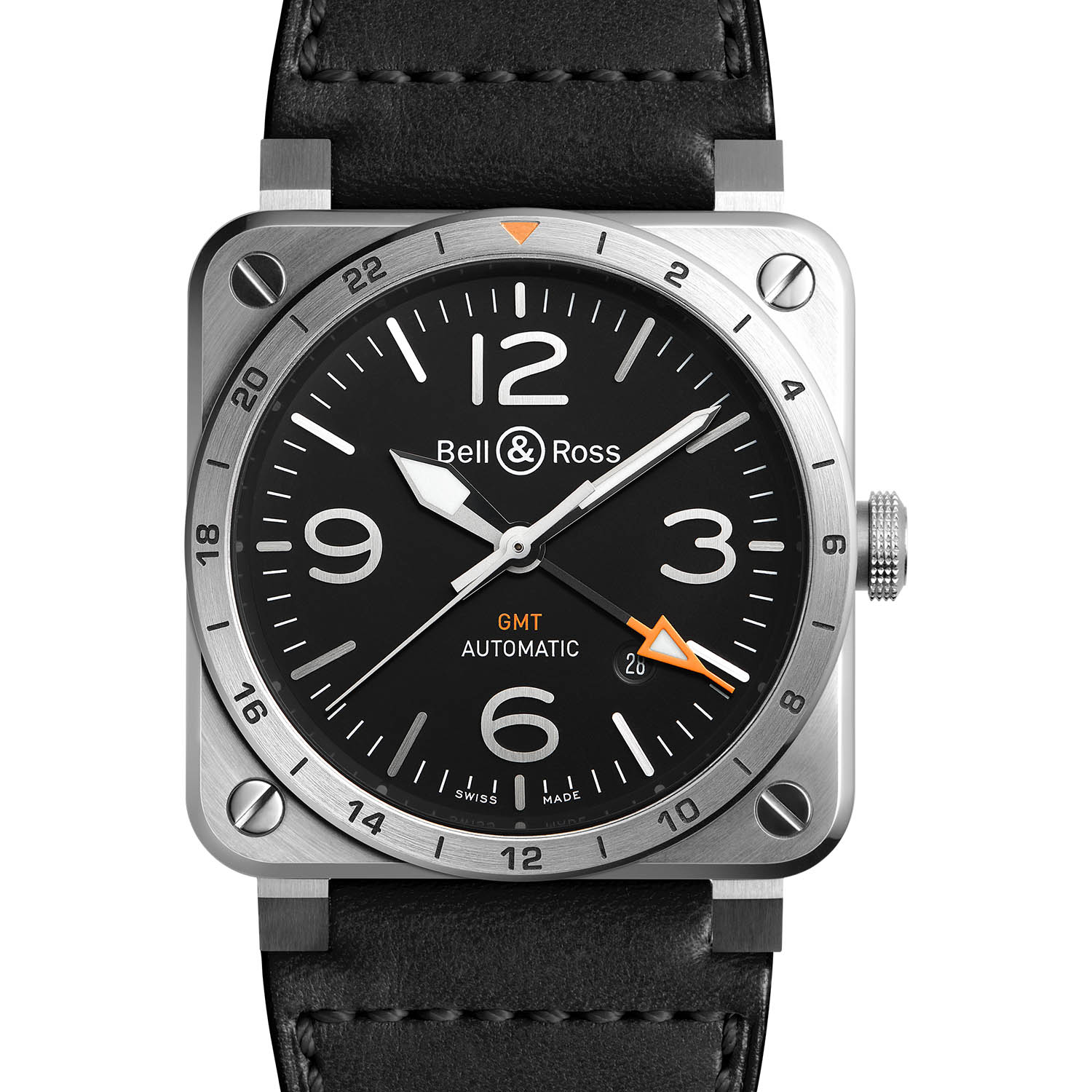 The Bell & Ross BR 03-93 GMT feels very familiar, with its 42mm x 42mm case, inspired by dashboard flight instrument. As such, it features the round bezel ontop a square case, with 4 functional screws. Being a civilian-oriented piece, B&R opted here for a non-coated stainless steel case, with more elegant details, such as the polished bevels on the sides. The GMT function has been added in this context by the mean of a 24-hour engraved bezel, with an orange triangle at 12 o’clock. The dial is once again classic B&R, with stylized applied Arabic numbers and propeller-shaped hands. The GMT indication is clearly highlighted in orange. The watch is powered by the Calibre BR-CAL.303, derived from the ETA 2893-2. More details here. 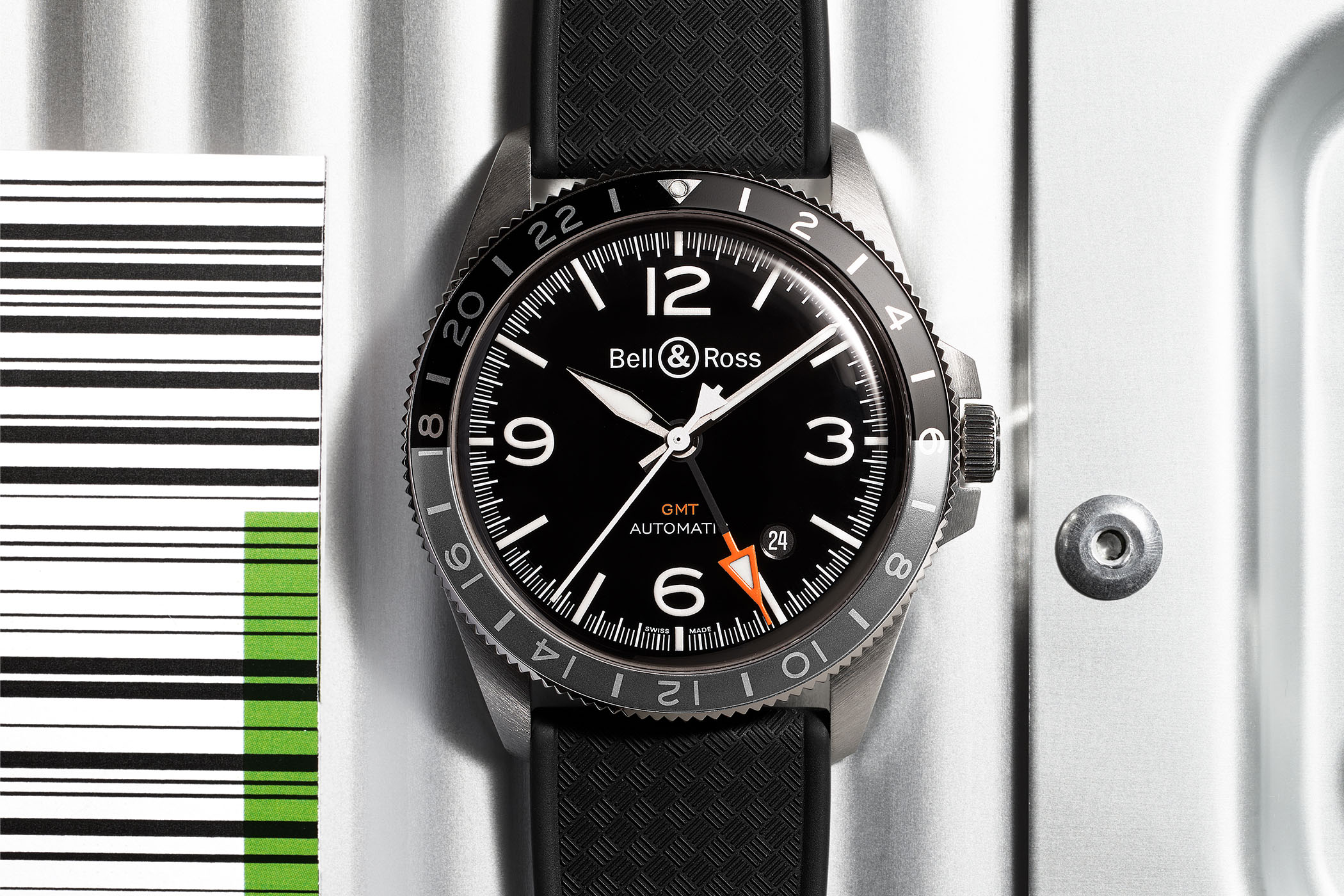 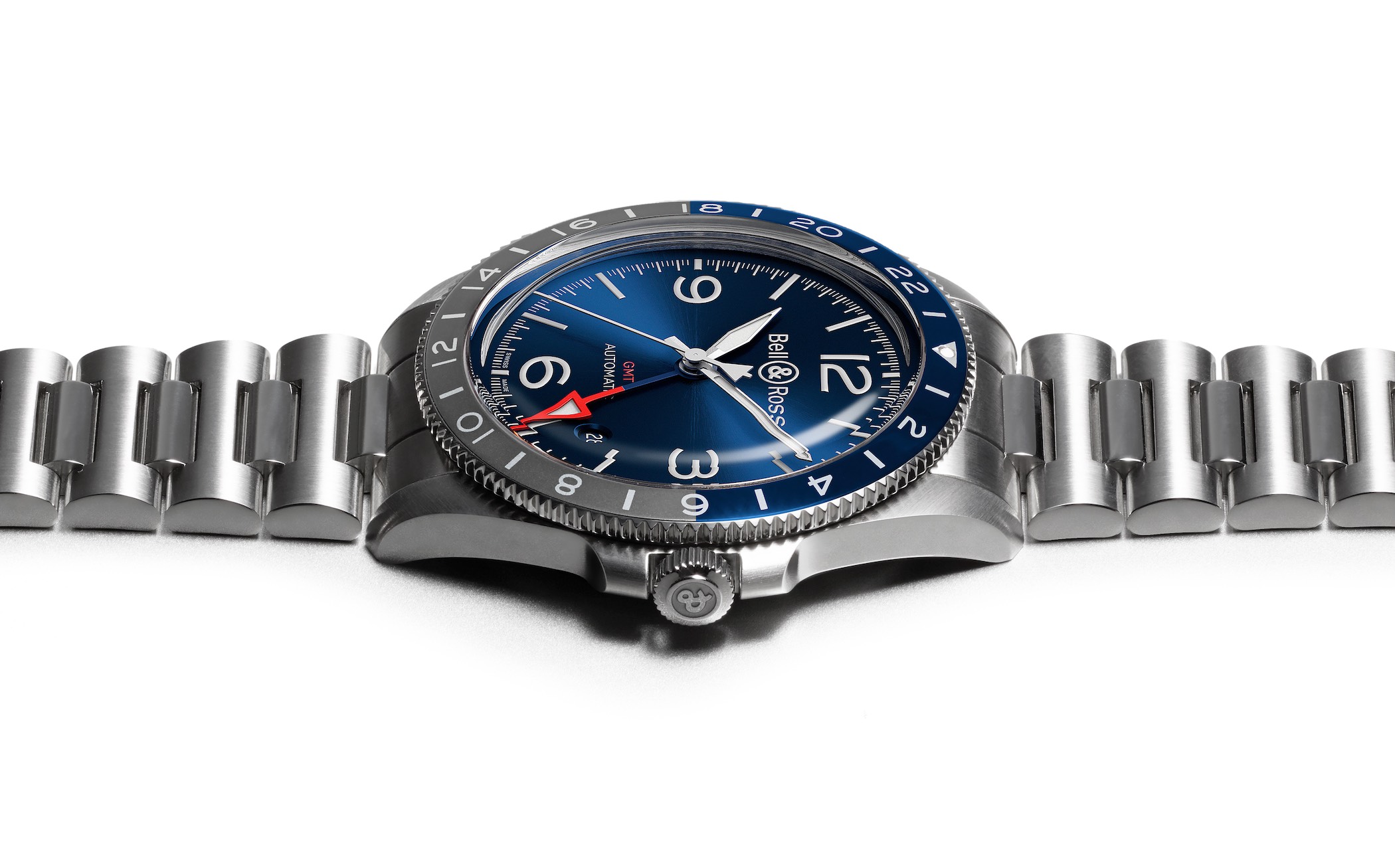 The other two watches with GMT function now in collection at Bell & Ross are based on the recently-redesigned VIntage collection, with a 41mm case featuring polished and satin-finished surfaces, a more compact shape allowing for great comfort on the wrist and nice elements, such as the protected crown and the highly domed sapphire crystal on top. The Bell & Ross BR V2-93-GMT is equipped with a 24-hour bi-directional bezel – as explained above – with bi-colour aluminium insert, to differentiate day from night. The watch is available in two editions, one with black dial and black/grey bezel, the second with a blue sunburst dial and blue/grey bezel. Both watches are powered by the Calibre BR-CAL.303 and are available on steel bracelet. The black version is also available on a tropic-like rubber strap, while the blue edition can be ordered on a grey and blue elastic canvas strap. More details on the black version here and on the blue version here.