What you’re about to see might just be a simple change of material, but it is nevertheless great news – not only because the watch looks superb, not only because the price is significantly lower but also because it is a great strategic choice. When it was introduced back in 2015, the Vacheron Constantin Historiques Cornes de Vache 1955 was an immediate success. Available in platinum or in pink gold until now, today it makes its debut in the hottest of all materials: Steel! 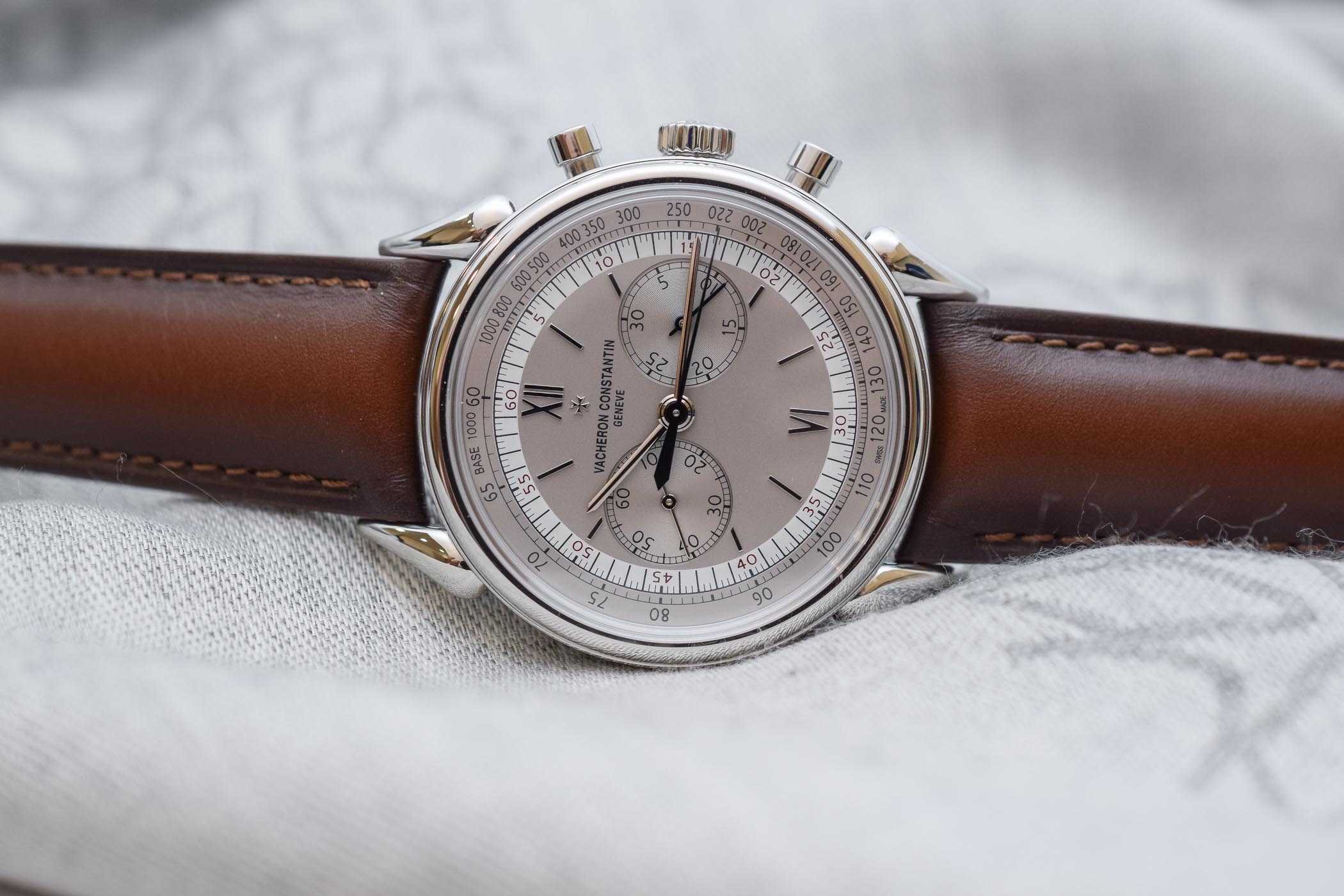 Steel… It is surprising to see how ambivalent this material is. For most watches, steel is the sensible, rational choice of material; it is much more accessible than any other material, it is solid, it is resistant to external aggressions, and it is easy to machine and finish. In short, a no-nonsense choice driven by pragmatism. But that’s for the masses… When it comes to high-end watches, steel is the exception. When it comes to non-sports watches, Patek Philippe, Vacheron Constantin or Audemars Piguet tend to rely on precious materials – gold alloys or platinum. In such a way, steel becomes the rarity and we all know how scarcity increases desire!

The story behind the Cornes the Vache

We’ll get back to the topic of desirability later, first, we need to situate the Cornes de Vache in context. As indicated by its full name “Vacheron Constantin Historiques Cornes de Vache 1955”, this watch is a reinterpretation of an important, well-known watch from the brand’s archives, the circa-1955 reference 6087. 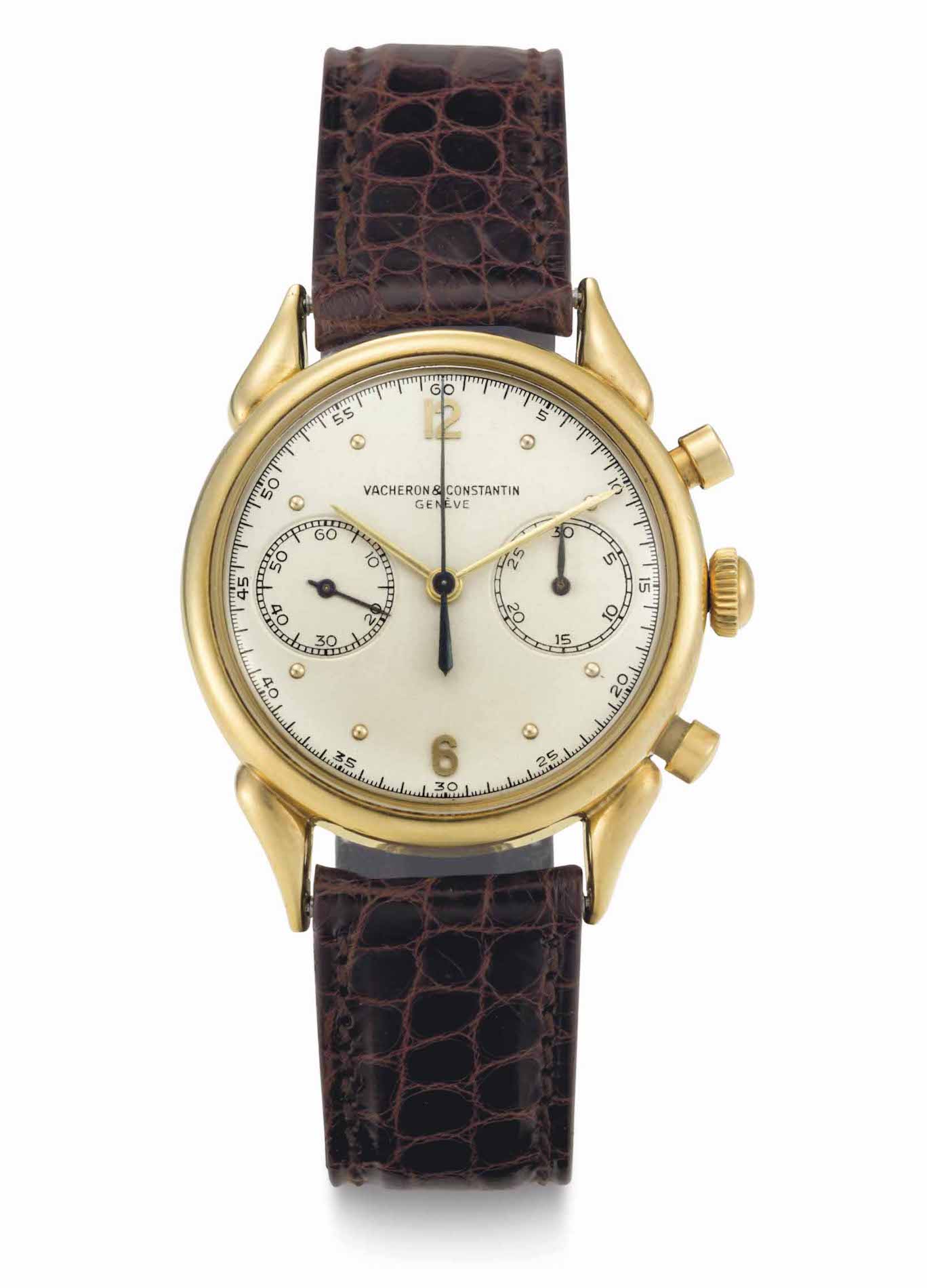 According to the literature, the “Reference 6087, known as Cornes de Vache amongst collectors, is one of Vacheron Constantin’s few chronograph models that was fitted with a water-resistant case, screw back, and rounded chronograph pushers (…) The design of the reference 6087 is further enhanced by the unusual teardrop-shaped lugs, giving the watch a distinguished and charismatic look (…) Produced in the mid and late 1950s, only 36 examples of the reference 6087 were made: 26 in yellow gold, eight in pink gold, and two in platinum. The watches were produced with different dial colours and layouts, and some featured a tachometer scale.” (source: Christie’s)

As often with Vacheron’s production between the 1940s -1960s, the design was by and large classic with a twist on the case – here, it was the lugs, with a distinctive teardrop shape or so-called Cornes de Vache (cow horns). This watch was the competitor of Patek’s reference 1463, as a high-end, hand-wound, chronograph-only timepiece. 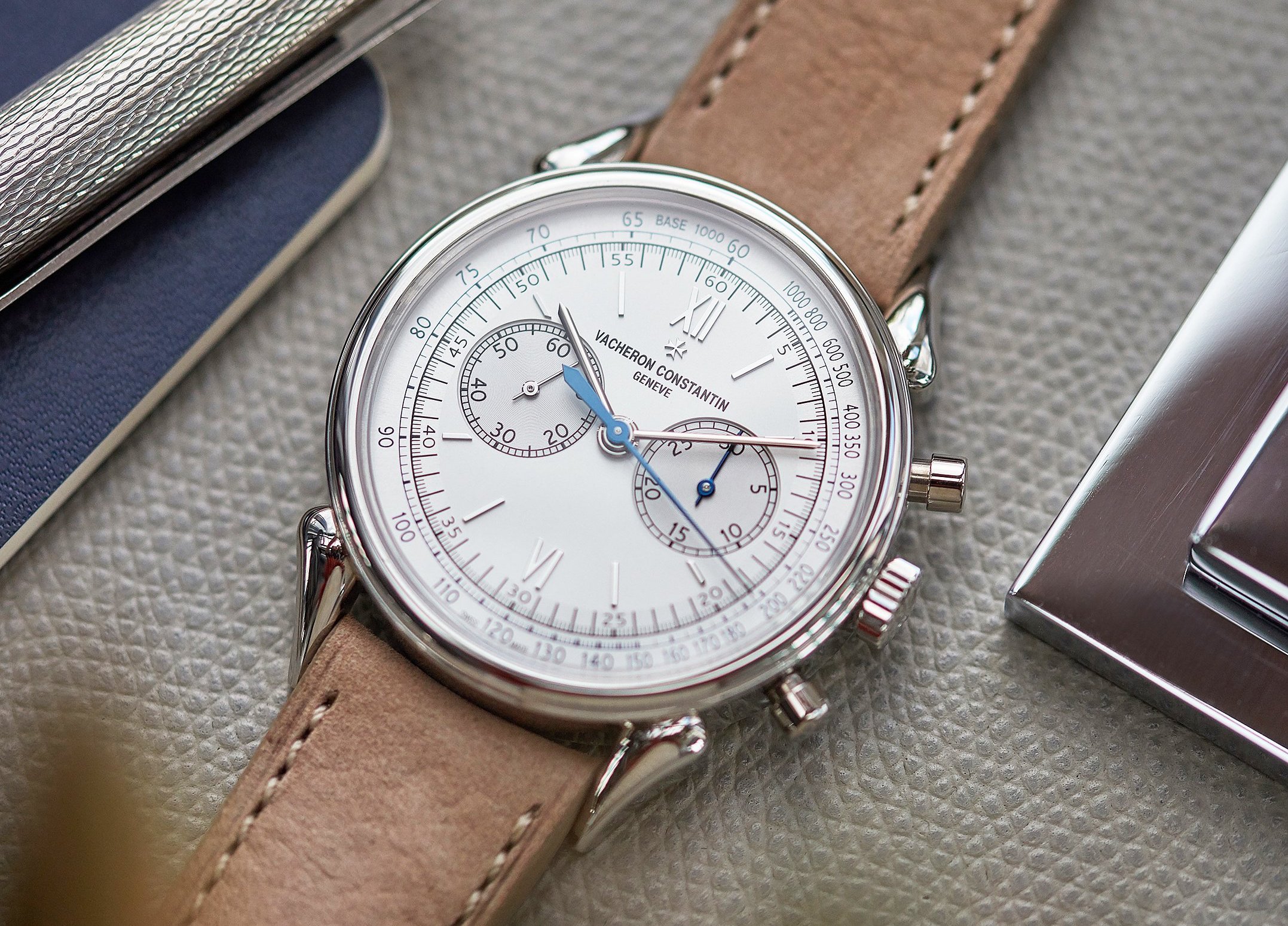 In 2015, Vacheron Constantin, which already had several beauties in its Historiques Collection, decided to shine a spotlight on this classic, iconic design with the Historiques Cornes de Vache 1955. First produced in platinum and in 18K rose gold, both with a silver-opaline dial, it was followed by a limited edition in steel for Hodinkee in 2017. But now, steel is offered directly by VC, as a non-limited edition (which doesn’t mean it’s going to be easily accessible either).

Let’s be realistic… This new version of the Vacheron Constantin Historiques Cornes de Vache 1955 might just be a change of material (and a few other design tweaks), but it is superb and is bound to generate a lot of buzz. No doubt about it. 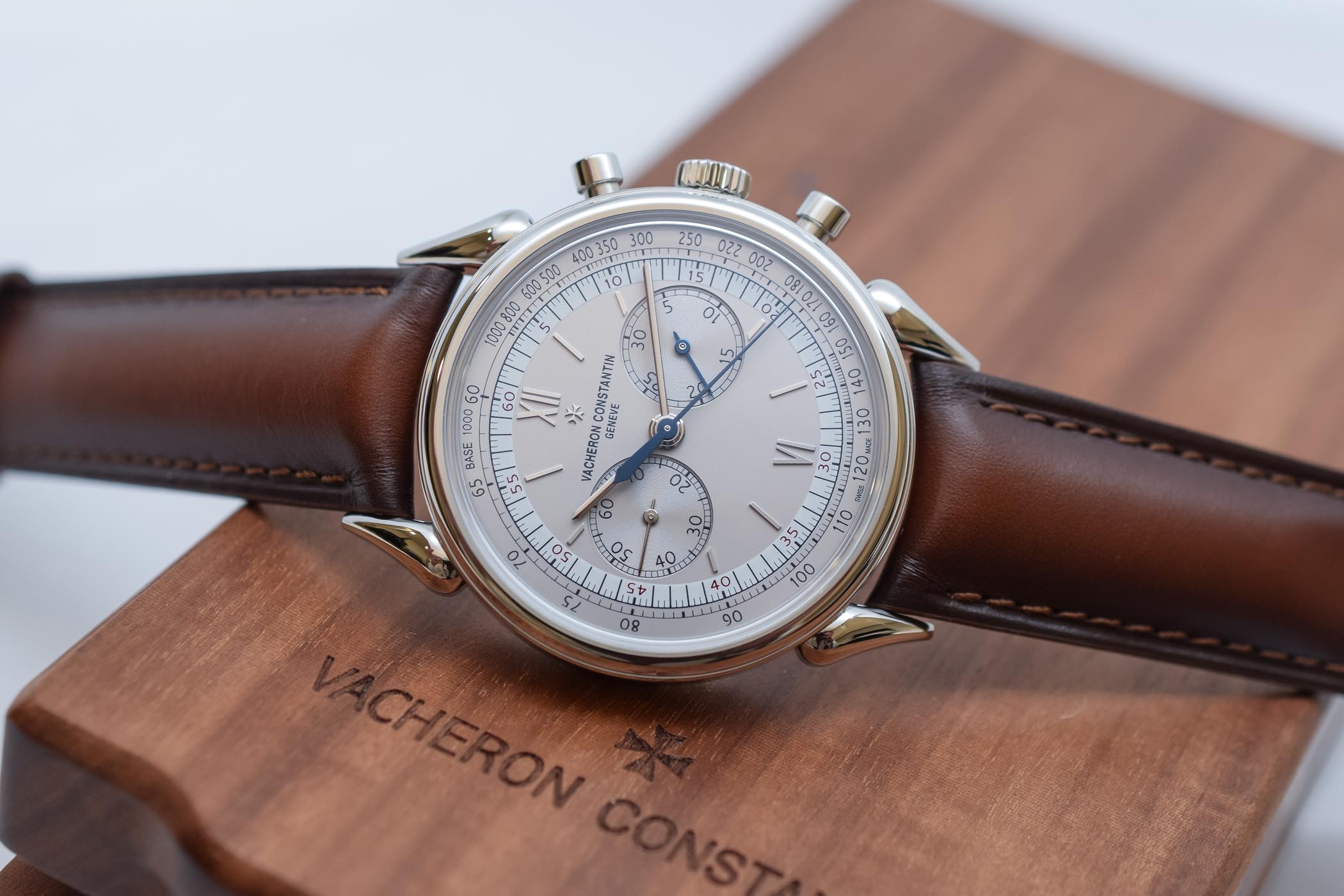 This evolution of the Historiques Cornes de Vache 1955 is done without any dramatic changes to the watch. Proportions remain identical, with a compact 38.5mm diameter and reasonable height of 10.9mm. Same goes for the overall design, which sticks to the basics of this model. It still features the same central polished container with a thin domed bezel, flat case bands and mushroom-like chronograph pushers and naturally, the distinctive element of this watch, its Cornes de Vache lugs. 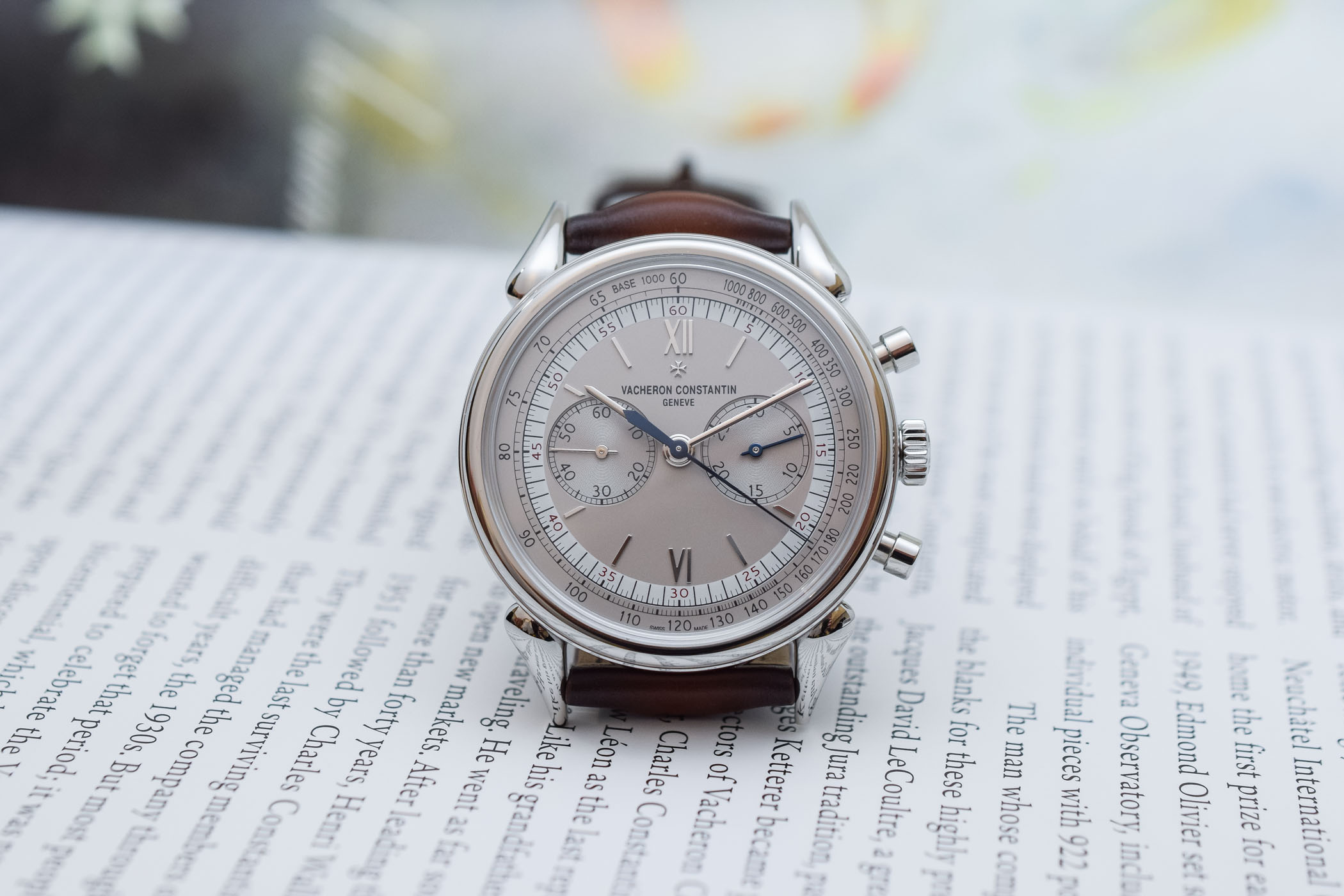 On the wrist, the Vacheron Constantin Historiques Cornes de Vache 1955 retains its natural elegance and its surprising presence, despite the small diameter – note that the lugs are both visually striking and rather long. The watch has a great visual impact but is never over the top. It is a perfectly balanced mix of classicism, vintage feel and elegance. Using stainless steel for the case provides two advantages: lightness and better resistance to scratches (compared to gold or platinum). The colour is also neutral with a nice shine. 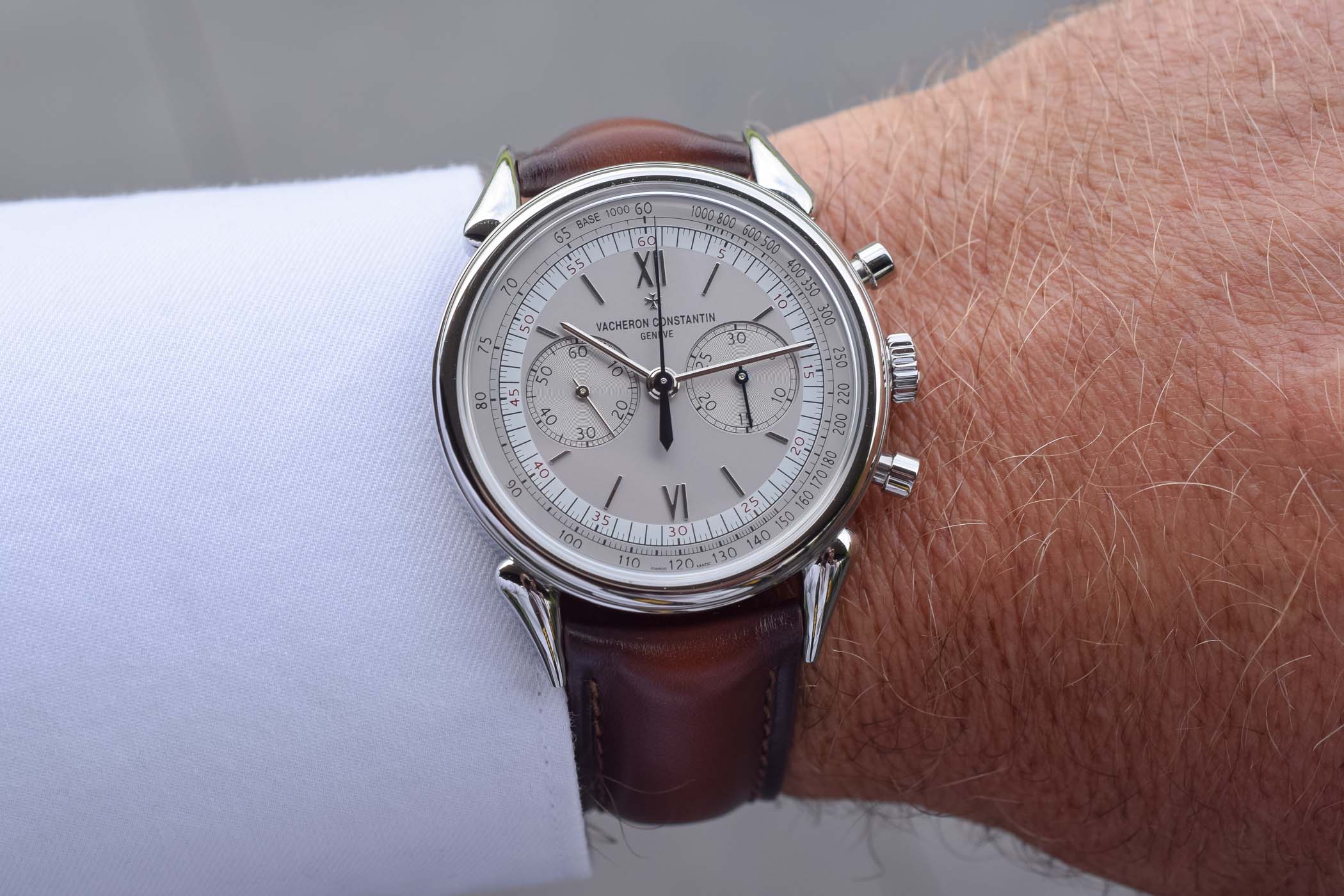 There are several other (small) evolutions on this Vacheron Constantin Historiques Cornes de Vache 1955 Steel. The most obvious change is the choice of a calf leather strap instead of the classic, maybe too formal alligator straps on the platinum and gold versions. The strap is beautifully executed, with a brown Serapian patina that gives great charm to the watch and a slightly more casual touch – in line with the choice of case material. It is secured thanks to a half Maltese cross-shaped steel pin buckle. 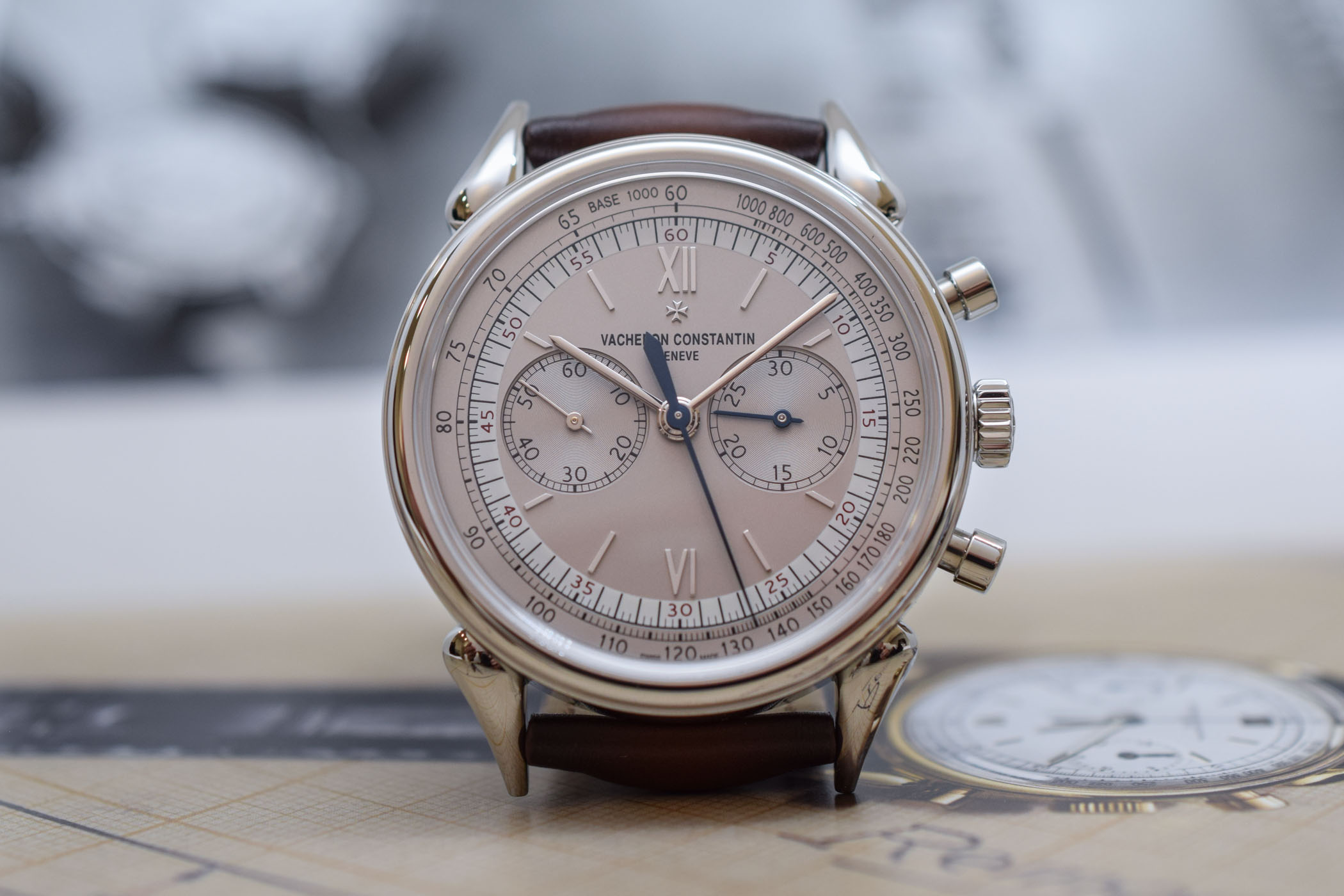 The other evolution concerns the dial. Although it appears identical to the other editions – same baton hands, same gold applied indexes, same use of blued steel for the chronograph indications, same tachymeter scale and same bi-compax layout – the dial now has a two-tone style. Indeed, the central area, as well as the peripheral scale, is grey velvet-finished opaline but the minute track is now treated in white and punctuated with dark red numerals. It is a discreet touch but it does add a bit of depth to this dial. 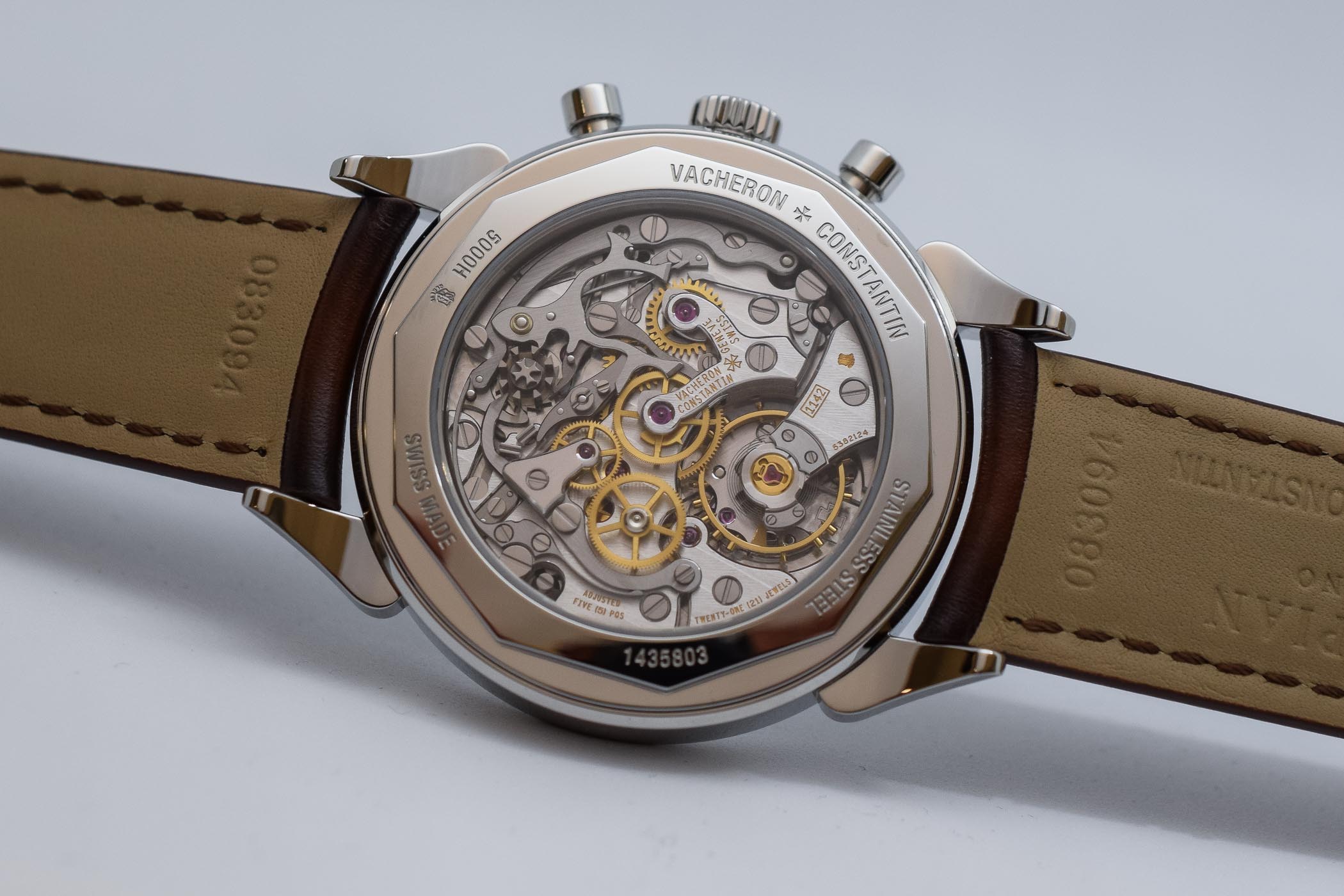 Visible through the sapphire caseback is the Vacheron Constantin calibre 1142. This classic, historically relevant movement, is based on the Lemania 2310 architecture, yet produced and decorated in-house by Vacheron Constantin – the intellectual rights for the movement were first acquired by Roger Dubuis before being acquired by Richemont. The movement, with its typical combination of horizontal clutch and column wheel, is superbly decorated (Hallmark of Geneva certification) and still such a pleasure to admire, thanks to an architecture that reveals all the parts. 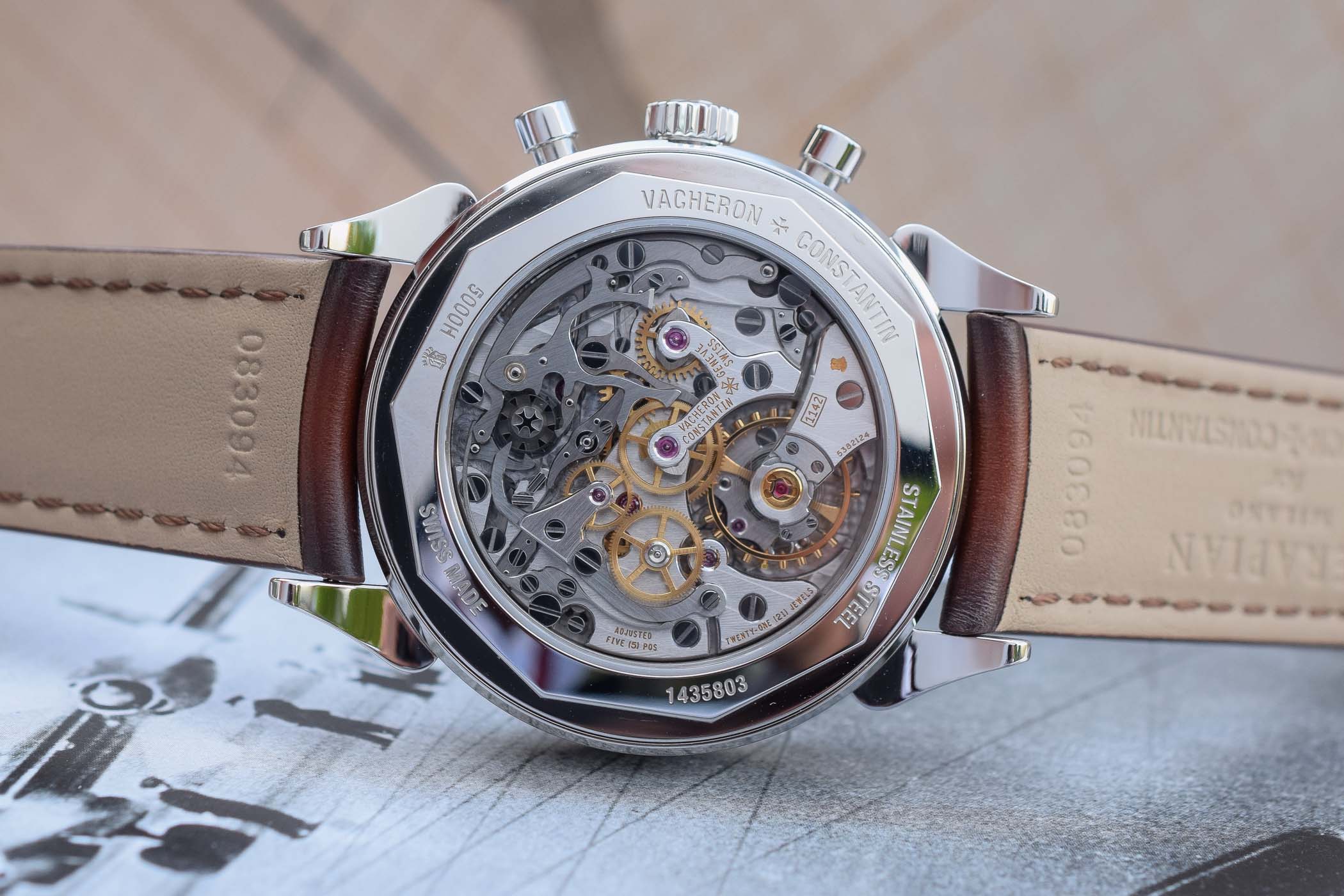 What to say… The Vacheron Constantin Historiques Cornes de Vache 1955 was and still is one of the most desirable chronographs on the market. It is one of the rare representatives of the high-end, elegant hand-wound chronograph category, and just because of that, it is important. Also, its proportions are almost perfect, the case is superb, original and elegant, the dial is handsome and the movement is a treat for watch enthusiasts. And this steel version is just reinforcing its desirability factor. 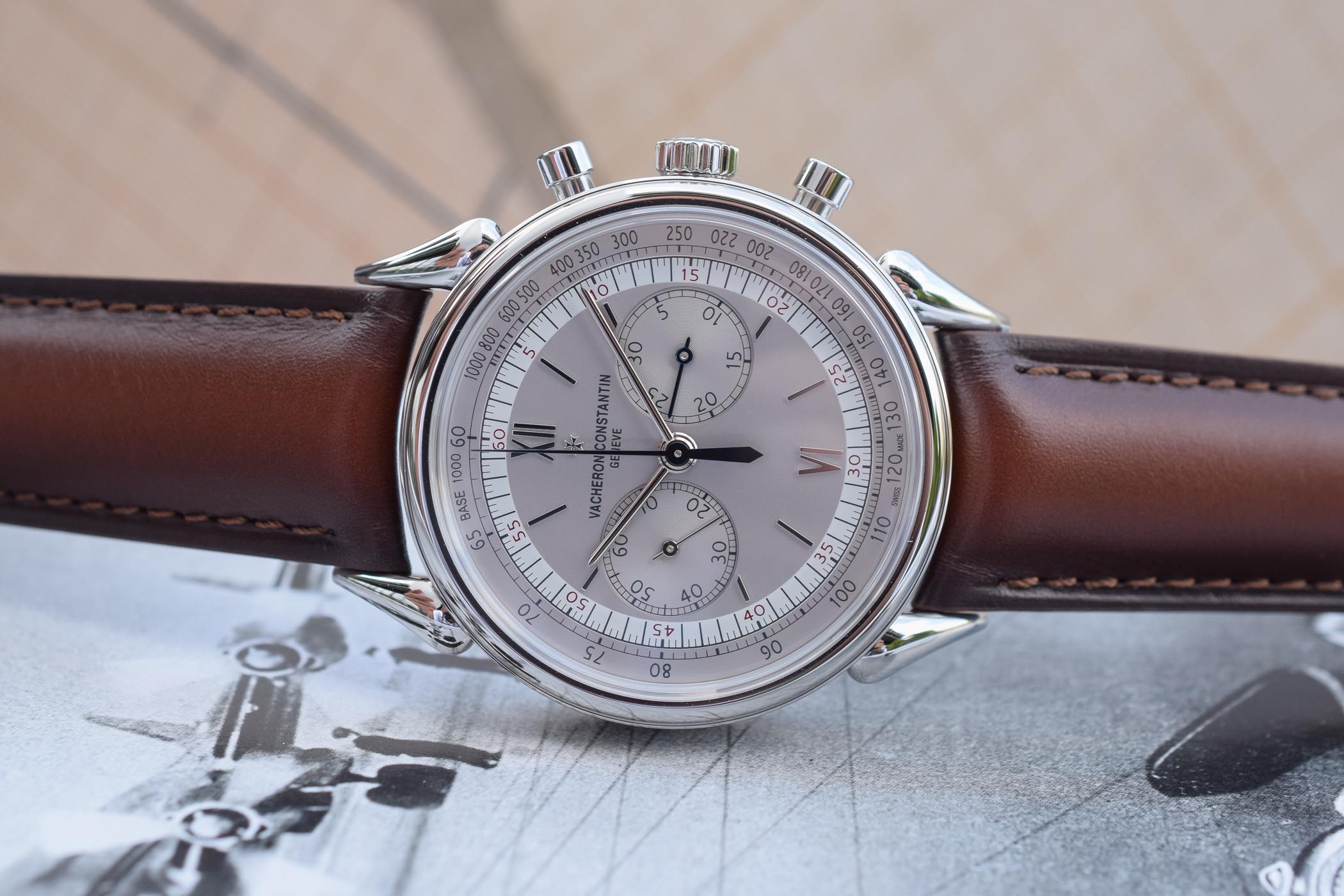 Certainly, at around 42K Euros, it doesn’t come cheap for a steel watch – still better than the 56k for the gold version or the 72k for the platinum version. However, it has to face two competitors: Patek with 5172 and Lange with 1815 Chronograph – which we compared here. Both are only available in precious metals (and don’t expect steel versions), for respective prices of 66K and 51K… And while I’d be doubtful that 10,000 Euros can change a decision when it comes to such exclusive watches, the choice of having a steel case in today’s context will certainly make the difference. As mentioned, scarcity is key.

The Vacheron Constantin Historiques Cornes de Vache 1955 in Steel (ref. 5000H/000A-B582) is offered as a non-limited edition, at a price of EUR 41,600 (incl. 20% VAT). As for the availability, even though not limited per se, don’t expect Vacheron Constantin to produce hundreds of pieces a year… and knowing the hype for steel watches these days, it won’t be easy to find one.