In recent years, we’ve Seiko digging in its past and reissuing some of its most glorious vintage watches, most of the time with two different iterations per re-editions. This often meant a modernized, enlarged yet relatively accessible model inspired by the original watch, and next to it a faithful re-creation of this very watch in a compact, legit, limited and not to so accessible package. Think about the SLA017 62Mas, the SLA025 hi-beat or the SLA033 turtle. But all were dive watches, which is understandable since Seiko’s reputation in this field is indisputable. But the brand’s heritage has more to offer, and this year is all about the Alpinist model, Seiko’s very first sports watch. Following the 1959 Alpinist Modern Re-Interpretation Watches, here is a closer look at the star of 2021, the Seiko Prospex 1959 Alpinist Re-creation SJE085.

(The following part was already explained in our previous article on the Modern Re-Interpretation watches, the SPB241J1, SPB243J1 and SPB245J1)

Seiko’s dive watches are so popular that they tend to make other models from the brand seem less important… which they are not. It’s just that the brand has been so active in this field, with countless milestone models, patents or innovations, that the rest feels less… groundbreaking. But dive watches only appeared in 1965 at Seiko and before that, the brand already had various purpose-built, so-called instrument models dedicated to professionals. One of them is the Alpinist. Created in 1959, the Seiko Laurel Alpinist can be considered Seiko’s first sports or professional watch. Just to say, this is indeed an important watch. Before we take a look at this specific model, and if you want to know more about the whole collection, you can have a look here, at thespringbar.com.

The Alpinist is a watch designed specifically by Seiko for “Yama-Otoko,” a Japanese word for mountain men. It was also Seiko’s first attempt to create a sports watch and as such, it should be regarded as important. Launched in 1959, this watch will lead the way to multiple generations of Alpinist watches. A hand-wound watch (with a 17-jewel Seikosha movement) with a relatively simple but sturdy 3-part case, the 1959 Laurel Alpinist was delivered on a so-called Bund strap, reinforcing its intentions for robustness. The stainless steel case measures 35mm and is topped by a high-domed plexiglass crystal. 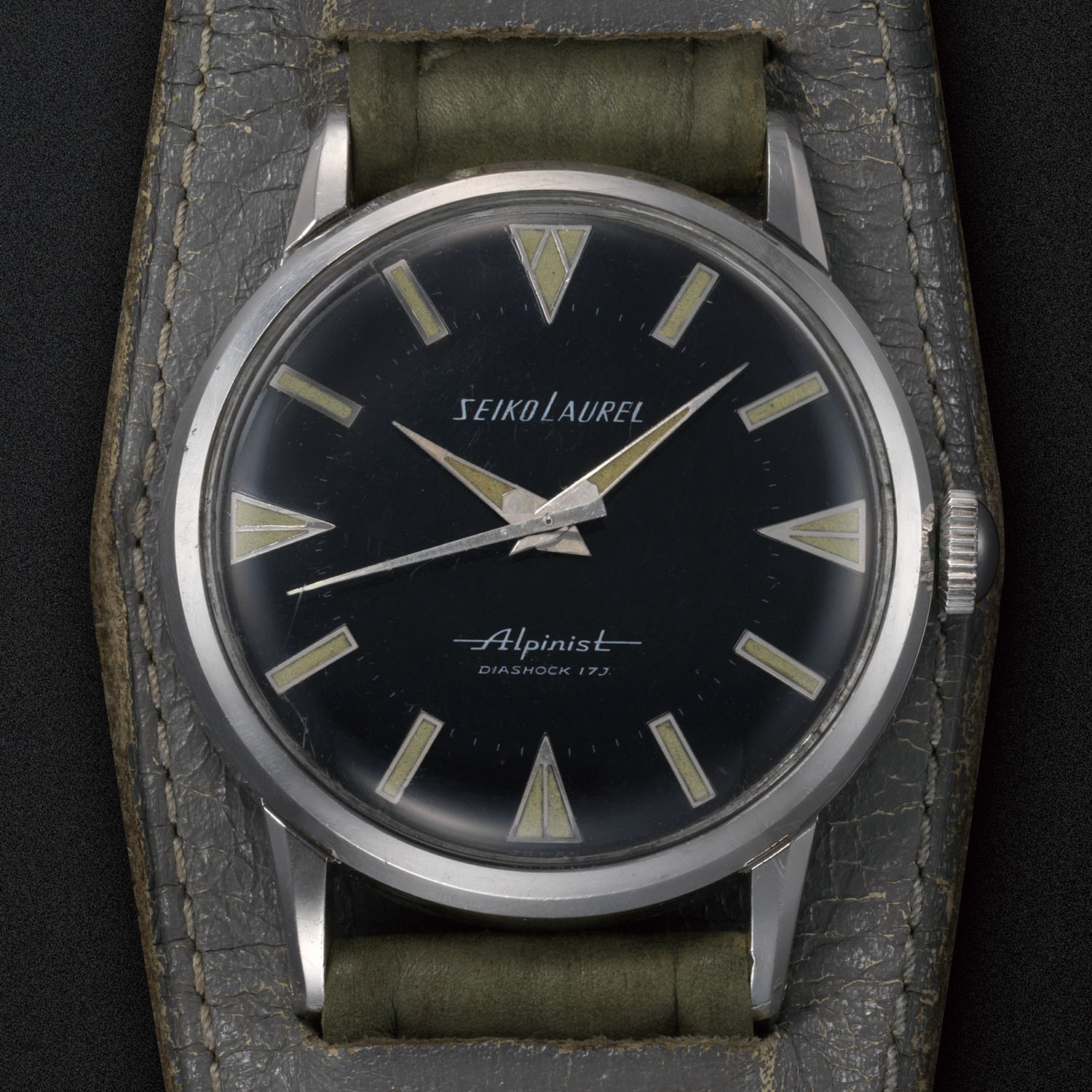 The most distinctive element of the Alpinist is its striking and very bold dial with large segmented triangular markers at 12, 3, 6 and 9 o’clock, as well as baton applied markers and an inner white minute track. There was an impressive amount of luminous material on the dial, as well as on the hands, again with a sharp Daupine design. The watch was available in black or white-cream.

There will later be more watches under the name Alpinist, such as the mid-1960s Champion models, and then the name somehow fell into oblivion. Yet, it came back in the mid-1990s under the Prospex line with three watches – the black SCVF005, the cream SCVF007, and the star of the show, the green SCVF009. Launched in 1995, this collection didn’t pay tribute visually to its ancestor, but it was once again designed for explorers and came with multiple purpose-built features, the main one being the combination of an additional crown at 4 o’clock and an inner bezel with a compass scale. It is also noticeable because of its cathedral hands and combination of triangular markers and Arabic numerals. This watch, even though only manufactured two years, later gained cult status.

For this reason, Seiko brought back the concept in the mid-2000s, with for instance the highly popular green SARB017, as well as in 2020, another collection – once again with most of the classic features – including a green model, the SPB121J1.

But for 2021, Seiko has decided to pay tribute to early Laurel Alpinist models, first by launching a faithful reproduction of the original watch and, as often with the brand, by adding a more accessible and more modern iteration. We’ve already covered the modern editions here, but it’s now time to look at the faithful re-edition.

On the contrary to the modern SPBxxx series, which are intended to bring the style of the 1959 Alpinist but are modern pieces in multiple ways, this SJE085 has a clearer vintage vibe, whether for its look, proportions or overall feel on the wrist, down to the strap – we’ll talk about that strap later though. It feels faithful, at first. It’s greatly executed, for sure. But everything isn’t perfect, or at least as I would have wanted it. Tastes and colours… 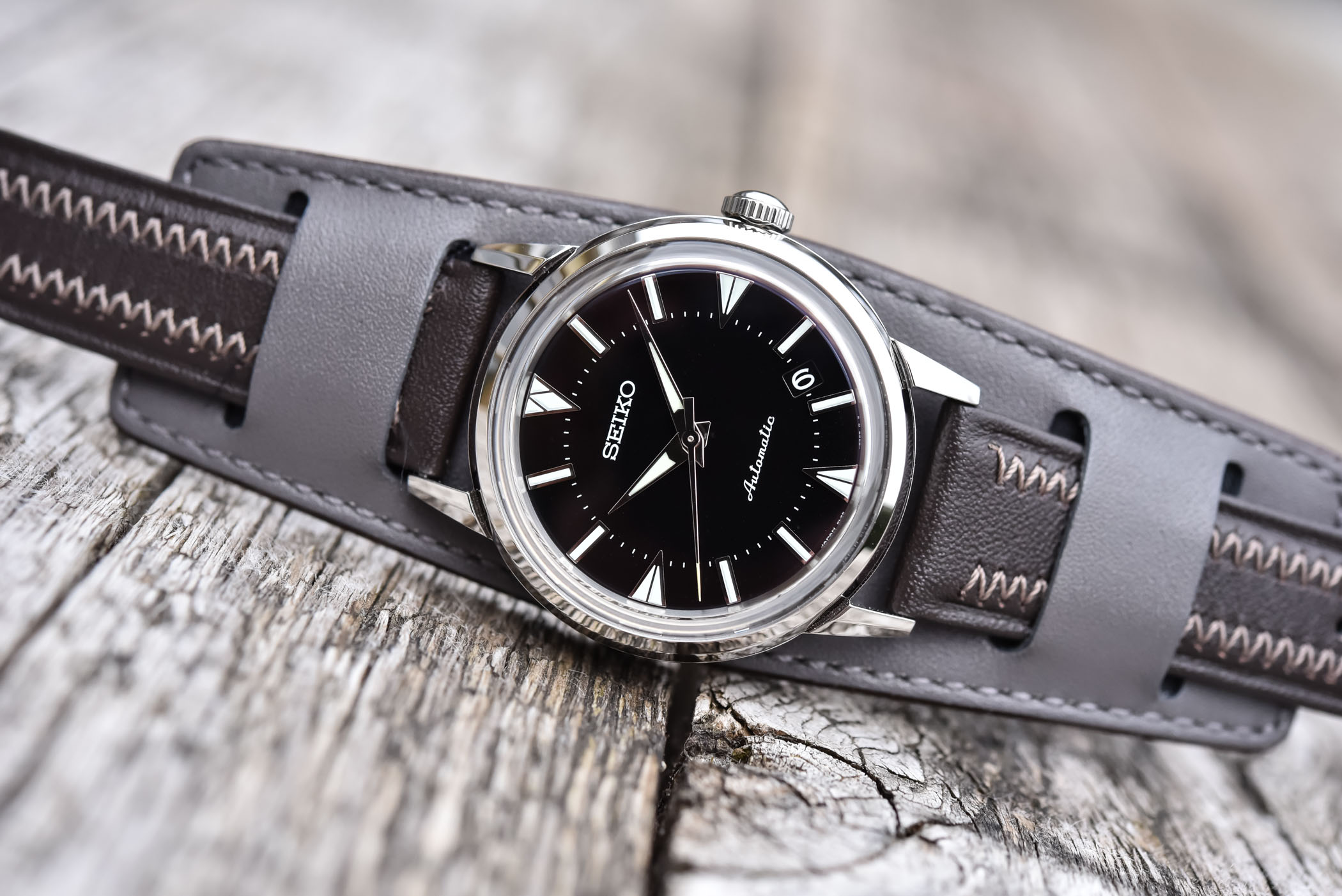 But first, the facts. What is this Seiko Prospex 1959 Alpinist Re-creation all about? Well, it’s a watch that wants to bring back the original Alpinist concept back to life, “in every detail” as explained by the brand. Basically, it is a typical exploration watch, meant to deliver superior contrast in all conditions, extremely easy time reading at a glance and enough robustness to handle adventures. Something that Rolex knows extremely well, with the Explorer collection. And just like the latest edition of the Explorer, the Prospex 1959 Alpinist is all about compactness. 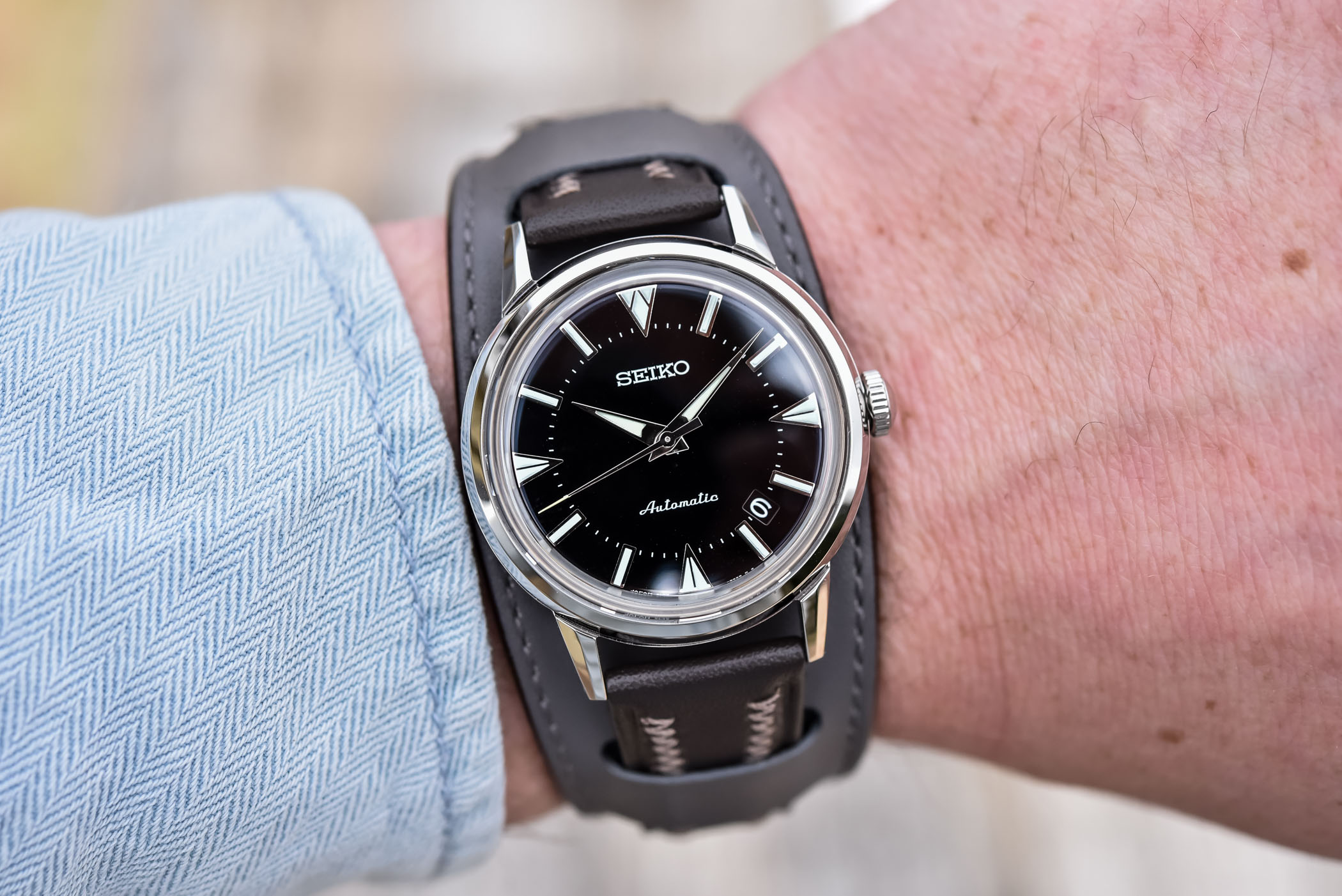 Indeed, this new SJE085 is small, at least the case alone is small(ish). If the original model measured about 35mm, this new vintage re-creation stays within the same range with a 36.6mm diameter, while the thickness, somehow explained by the automatic movement, sits reasonably at 11.1mm. Even better is the lug-to-lug measurement, just below 44mm. So all in all, the case is compact – but that doesn’t mean that the end result is small, as the strap has to be taken into account here. 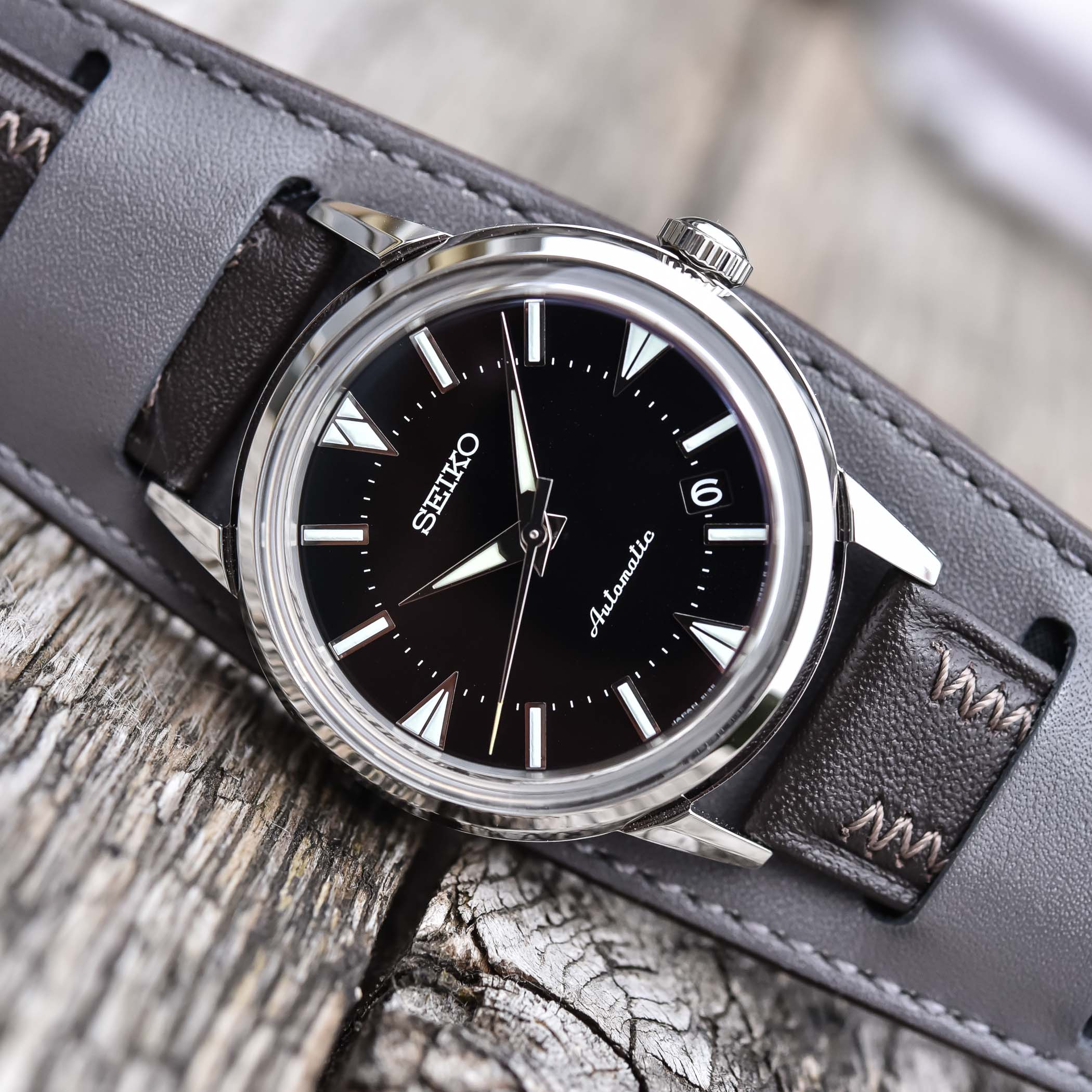 The case of this Prospex 1959 Alpinist is also, shape-wise, inspired by the original model with a thin and angled bezel, a box-shaped sapphire crystal that mimics the look of the original plexiglass and thin, faceted lugs. The stainless steel used here is entirely polished, which might be faithful to the original watch but results in a certain “glossiness” and shine that would certainly need a bit of wear and tear… just to give the watch a more rugged feel. All in all, the execution is very neat and precise, with no room for approximation. And while some disagree, a 36.6mm watch is masculine and has some presence on the wrist! 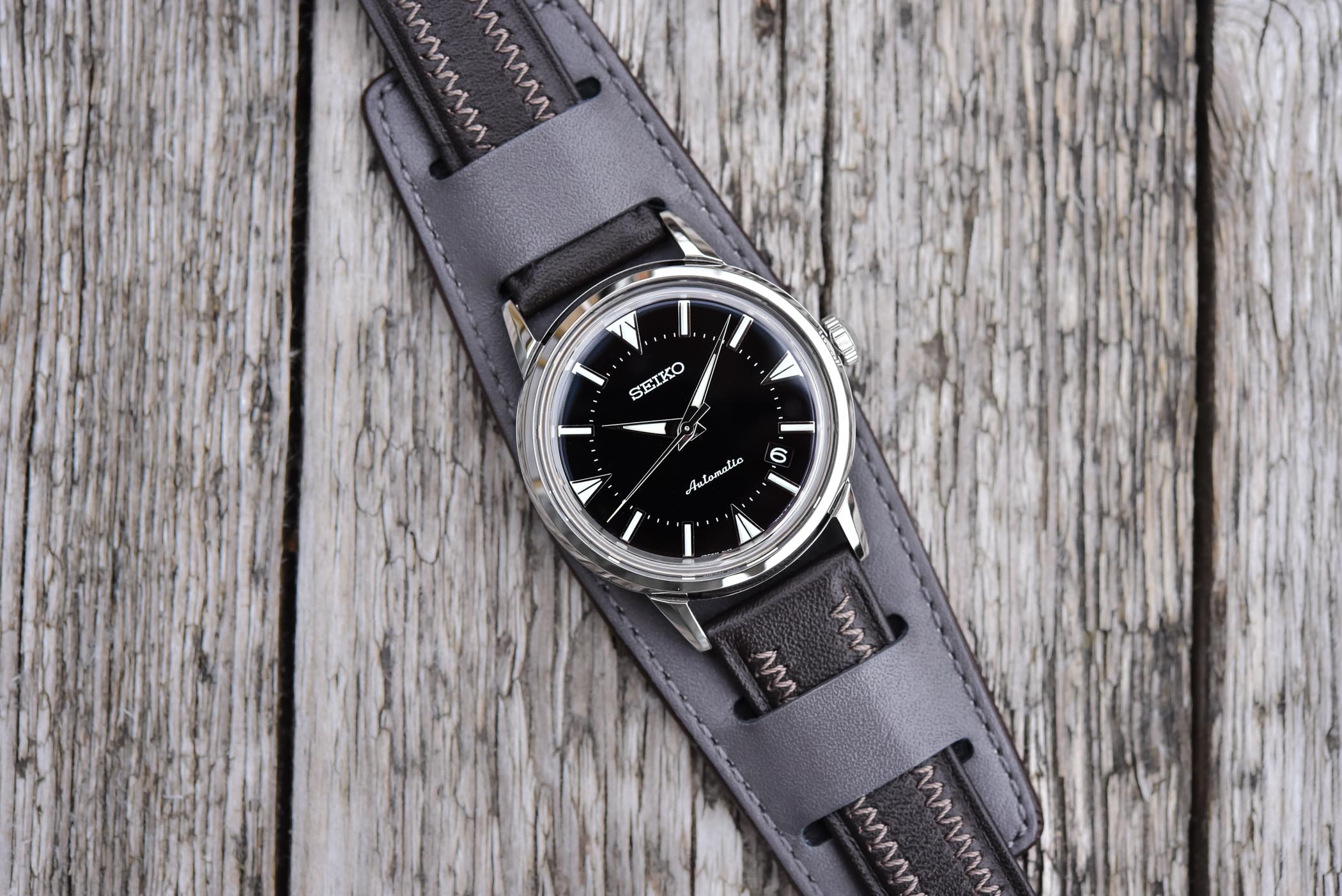 The dial of the original Alpinist watch was its most striking part, and this is true again with this re-creation. Applied on top of a glossy, typically late-1950s black dial are the signature markers of the Laurel watch. The dial features triangle markers at 3, 6, 9 and 12 o’clock (the latter being larger) with a segmented execution, with polished metallic surfaces and a large amount of LumiBrite – the super bright luminescent material of Seiko – tinted in white. No fauxtina here. The rest of the markers, more classic applied batons, as well as the sharp dauphine hands, are again faithful to the original watch. And all are precisely executed. And an inner minute track is once again reminiscent of the 1959 Laurel. 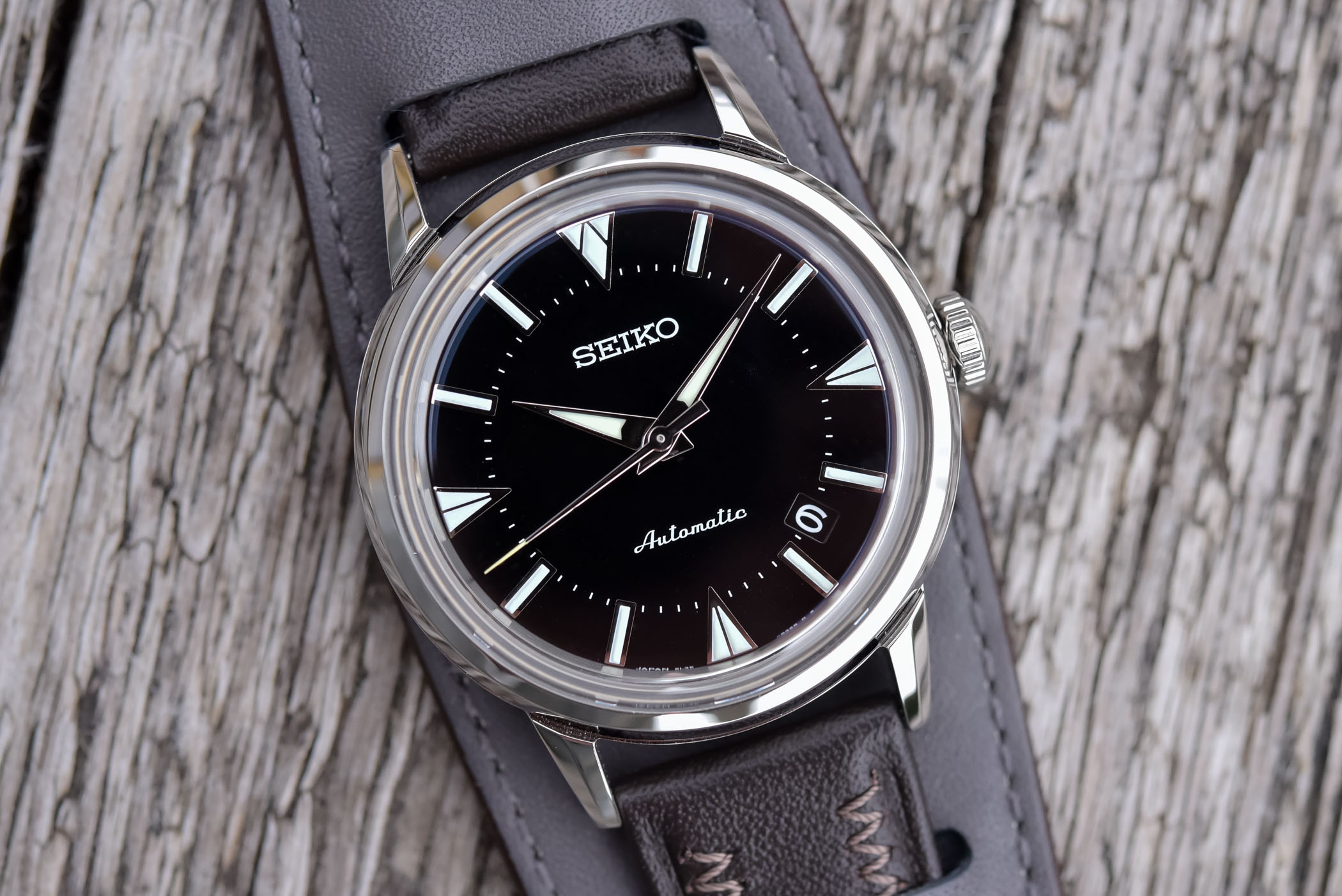 What isn’t faithful is the date window… While its presence makes sense on the modern re-interpretation models, I would have preferred this SJE085 to be a time-only watch. At least, the date blends well into the dial, with its tone-on-tone disc and no metallic frame. Also if the “automatic” mention does use a vintage font, why not having the Alpinist logo instead? But apart from those two elements, the dial is very attractive, provides great contrast and a vintage feel that doesn’t look exaggerated.

Inside the case is the calibre 6L35, an automatic movement that is known as a higher-end take on the self-winding engine by the brand. Unveiled in 2018, this movement was developed to be thinner than the brand’s traditional movements, and also to be an alternative to Swiss counterparts, namely the ETA 2892 – with almost identical dimensions. Beating at 4Hz, with a 45h power reserve, it measures 3.7mm in height and features a stop-seconds and a quick-set date. It is here adjusted to -10/+15 seconds/day and even though hidden under a sealed caseback, it is nicely decorated. 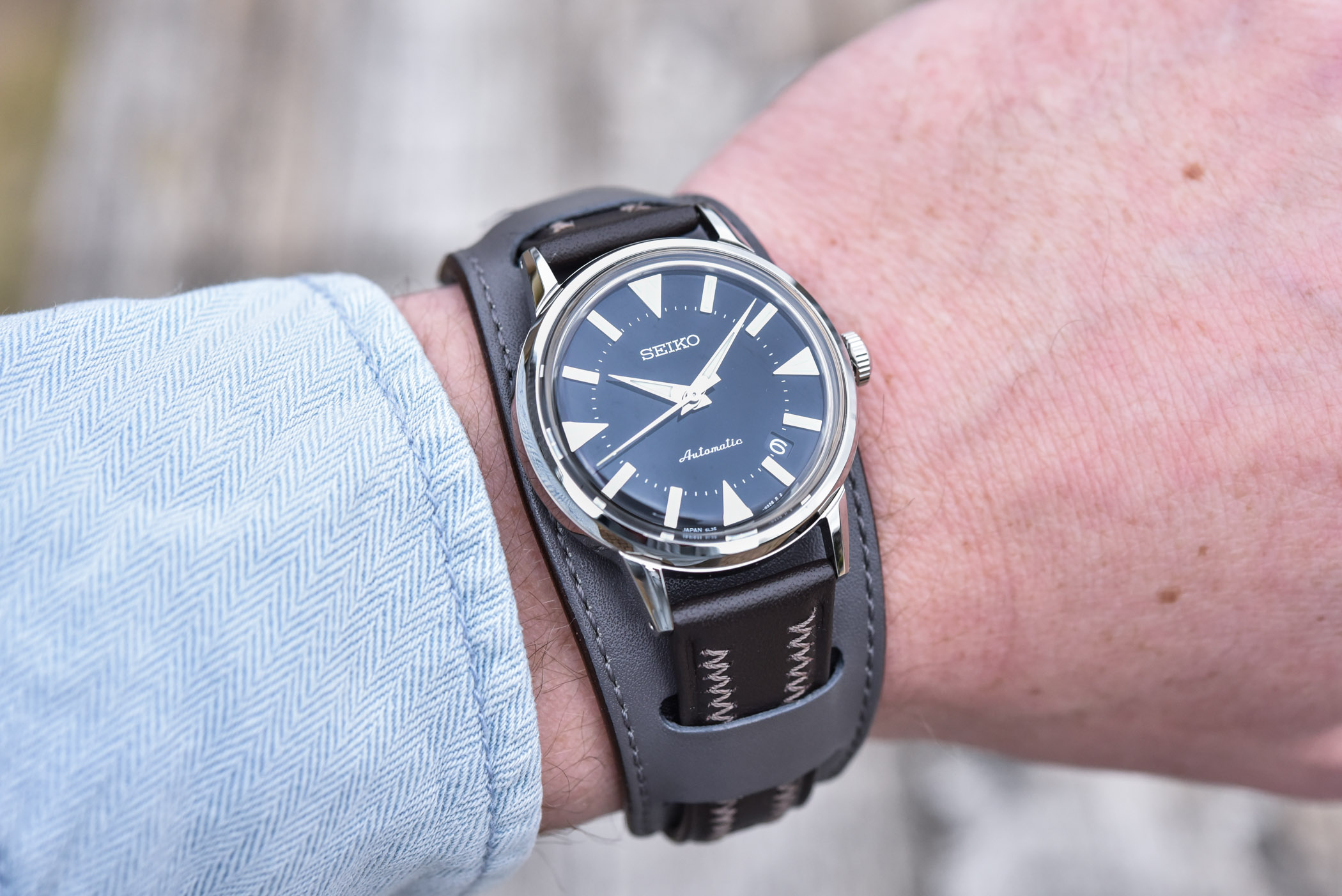 Now comes the strap. The idea of Seiko was to offer something identical in style to what was used by Yama-Otoko on their Laurel Alpinist watches. This means a brown 2-part calf leather strap with an original, distinctive jagged stitching, and underneath a grey leather protective cuff band. If I can salute the effort in terms of design and boldness, the problem for me is that this cuff band somehow negates the cool compactness of the case, making the watch fairly big on the wrist (note that it is here worn by Robin, who’s 2 metres tall). Personally, I’d remove this cuff and would wear the watch on the traditional strap only. Once again, to each his own. It is closed by a nicely executed steel pin buckle with an old-school design.