Genus is a relative newcomer to the game of haute horlogerie and took off with their GNS collection. Highly complex, superbly finished and massively intriguing to behold, its main feature is a unique time display featuring a chain snaking around two gears to indicate the tens of a minute. After the first release, the GNS 1, they came back with the Genus GNS 1.2 TD and now the GNS is taking flight with an actual dragon. We’ve had the chance to go hands-on with the new Genus GNS Dragon. 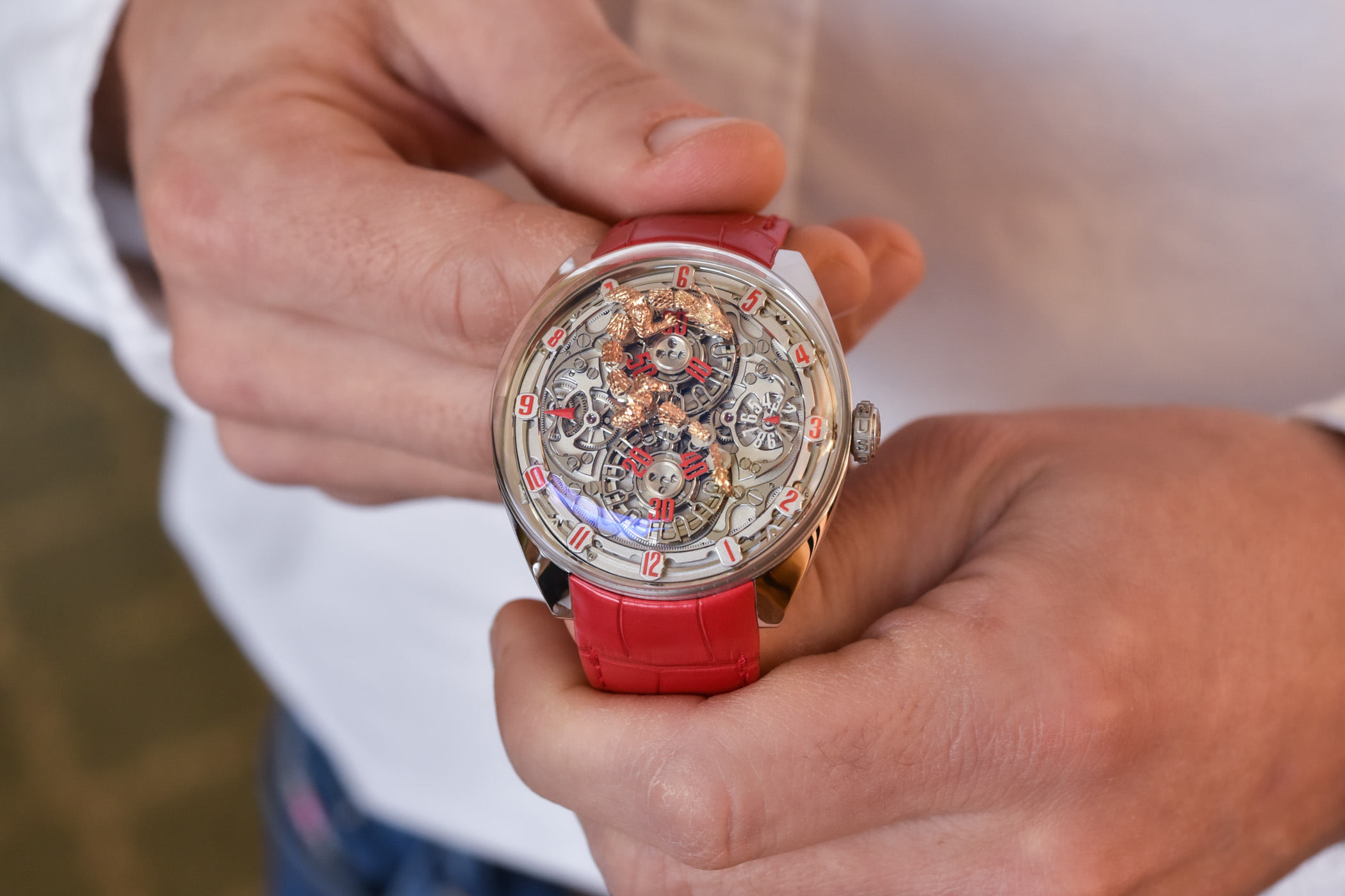 At MONOCHROME, we love independent watchmakers who are doing things differently and presenting the most complex and unusual mechanical wonders. So when newcomers Genus presented their first creation, we sat down with the duo behind this incredible new initiative; Catherine Henry and Sébastien Billières. Where Catherine Henry takes care of the business side of things, Sébatien Billières brings more than 20 years of watchmaking experience to the plate (he is also managing his GMTI movement manufacturing and assembly company and teaching watchmaking).

The Genus GNS broke grounds with a very unusual timing indication. Inspired by the number 8, somewhat of a fascination for Sébastien, there’s a total of thirteen years of research and development in these extraordinary watches. Time indication is split into hours, tens of minutes and single minutes. The hours are indicated by a revolving ring on the outside perimeter of the dial, and rotating hour markers that right themselves as they creep closer to the indicative pointer at 9 o’clock. The tens of minutes are indicated by a chain revolving around two thirty-minute counters, with ten-minute increments portrayed by discs. This is split into 20-30-40 minutes on the bottom counter, and 10-50-60 on the top one. Finally, a rotating counter at 3 o’clock adds the remaining single minutes to complete the timing indication.

All this mechanical wizardry is a real spectacle to behold, especially with that segmented “centipede” working its way around in a figure-eight. The leading segment is done in a different colour as that is the one that indicates what ten-minute segment you’re on. The new Genus GNS Dragon one-ups itself by use of a fully sculpted, segmented dragon. What was already a spectacular sight becomes an even more fascinating animation.

A dragon is a mythical beast found in various parts of the world’s history. From ancient Chinese mythology to Viking folklore and the Gate of Ishtar in Babylon, it symbolizes multiple things. Protection, wisdom, eternity – all attributes ascribed to dragons, whether being sea-dwelling or flying dragons. The dragon in the Genus GNS Dragon is done in gold, sculpted and engraved by hand and divided into eleven segments. It is an embodiment of a Chinese mythological dragon, wingless but still able to fly, characterized by a bearded mouth with long tendrils. Upon closer inspection, it is remarkable just how detailed the creature is, with even individual scales being distinguishable. 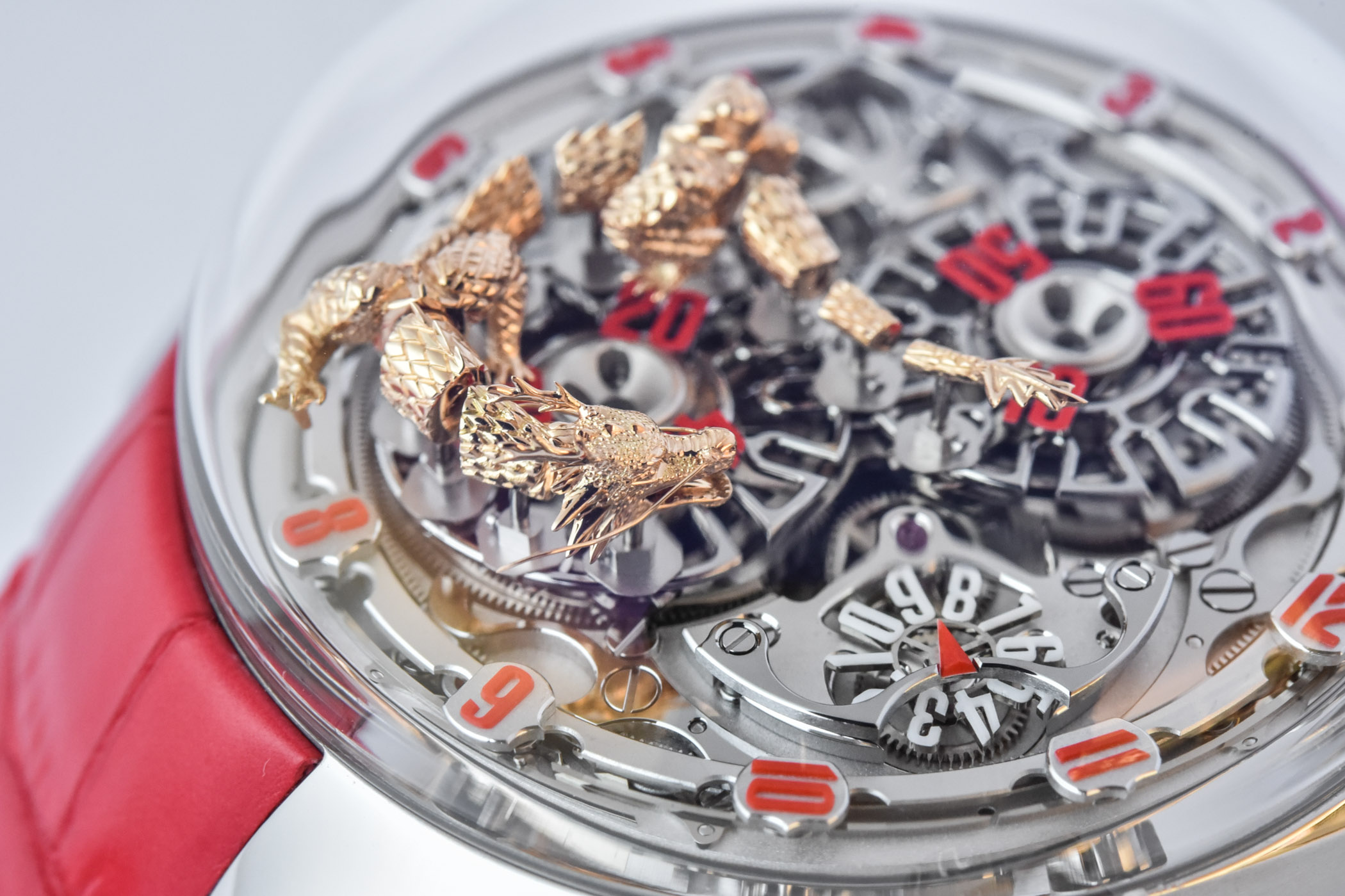 Putting something as heavy in motion, like it is the case in the Genus GNS Dragon, is not easy and as such, it took Sébastien and his aiding craftsmen over a year to complete it. The head alone is carved out of six blocks of solid gold, just to indicate how intricate and complex this work really is. Furthermore, each segment had to similar in volume and dimension in order to seamlessly glide over from one orbit to the next. Of course, a normal sapphire crystal would not fit this incredible piece of craftsmanship and would not display the dragon’s motion in all its glory. Instead, a super-domed, boxed sapphire crystal allows a full view from all angles. 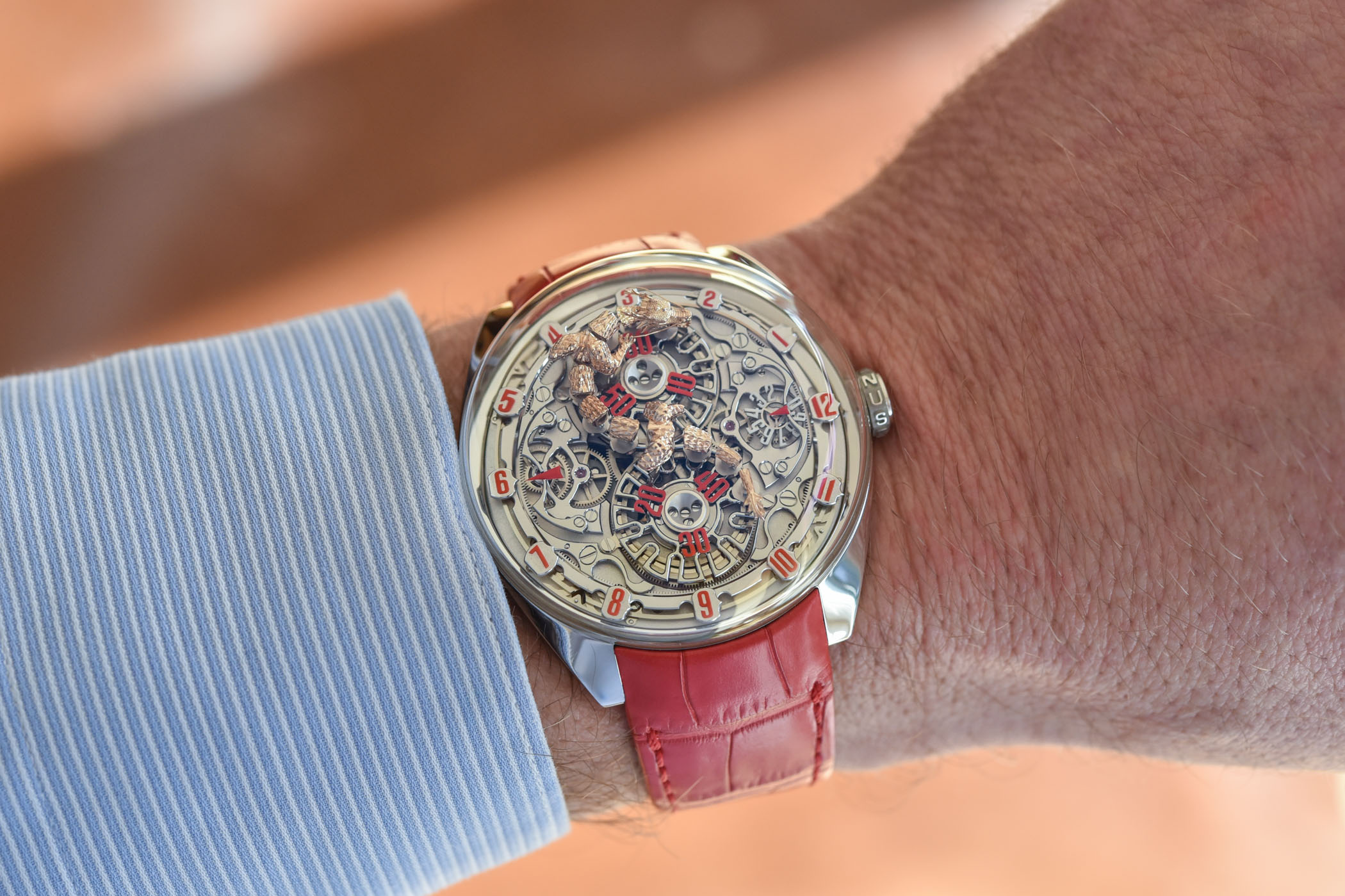 When moving, the dragon almost seems to float over the movement graciously, visible from almost all angles. Naturally, due to this extremely tall crystal to cover the dragon, the Genus GNS Dragon is considerably higher compared to the GNS 1 and GNS 1.2 TD, measuring 18.8mm, compared to 13.1mm for others. The diameter of the 18k white gold case is unchanged, at 43mm across. All the hour and minute markers are done in red, to tie in with the Chinese inspired theme, as is the alligator strap attached to it. 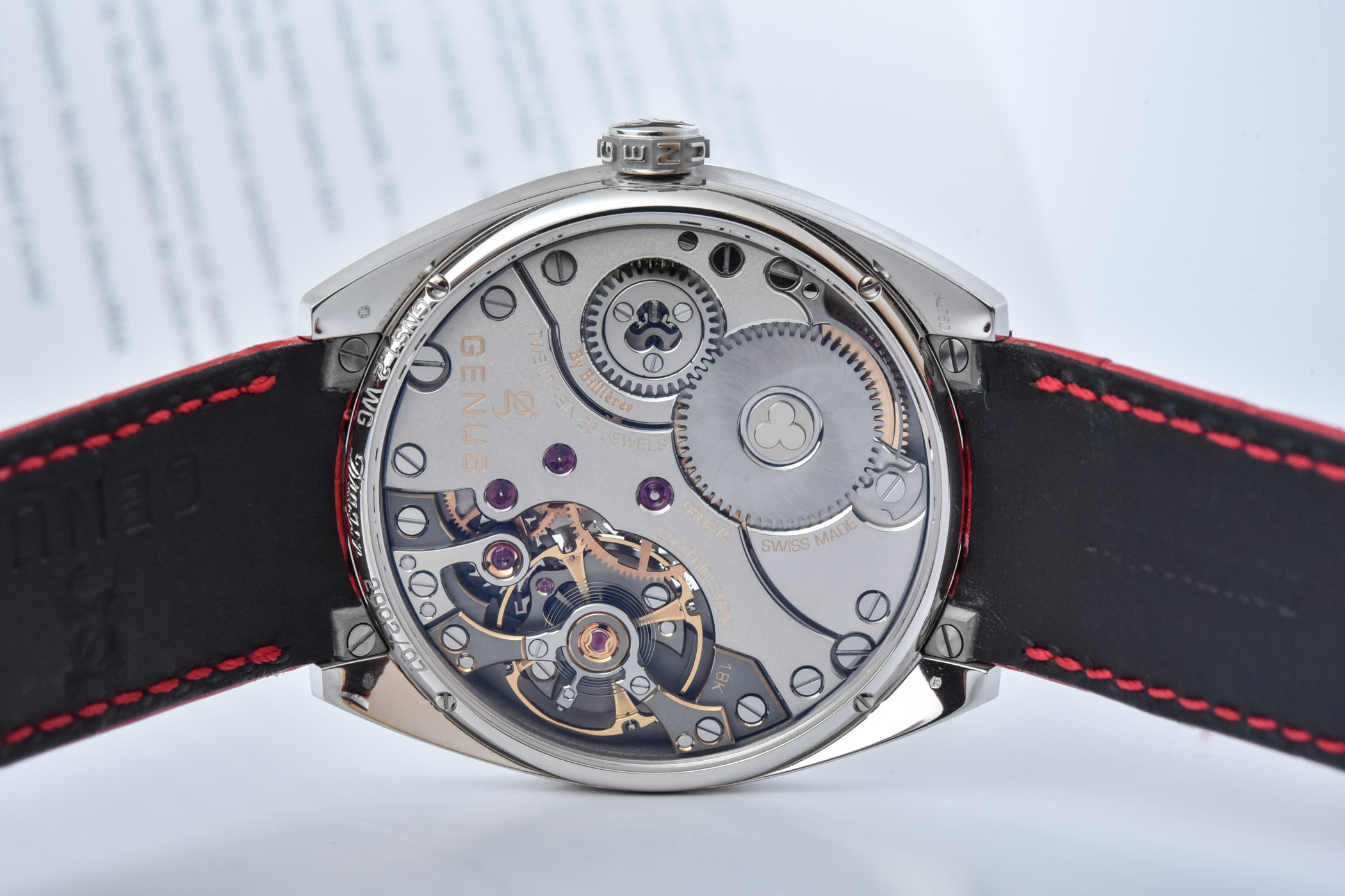 On the technical side of things, the GNS1 movement remains similar in construction. The calibre offers the same indications and specifications as before. The plate and bridges are made in solid 18k gold, and all components have been made and finished by hand, according to the finest watchmaking traditions. Mirror polishing, bevelled edges, micro-blasted plates, it’s all there. The hand-wound Caliber 160W 1.2 consists of no less than 390 parts, runs at 2,5Hz frequency (18,000vph) and offers an estimated 50 hours of power reserve.

The Genus GNS Dragon is one highly complex and evocative watch, with a price of CHF 150,000 before taxes. Bespoke options, including gem-setting, is possible upon request. More details at genuswatches.swiss.