In 1962, on the 5th of October to be precise, the world discovered a character that will become a legend of the silver screen. Adapted from the 1958 novel of the same name by Ian Fleming, Dr. No will start an emblematic series of 25 movies featuring a British secret agent working for MI6 under the codename 007, James Bond. 60 years later, the impact of the series is undeniable. James Bond isn’t only a character, it’s a lifestyle, gathering elements that have become as iconic as the man. Cars, of course, such as the DB5, but also watches. And if multiple brands have been involved in the earliest days, Omega has, since 1995 and GoldenEye, become the archetypal Bond Watch. And now, both parties celebrate 60 years of 007 movies, with the new Omega Seamaster Diver 300M 60 Years Of James Bond. And if it comes in steel and with new colours, the main topics are the comeback of the wave dial and the cool animated caseback… Some good GoldenEye vibes are in!

We often tend to associate the name Bond with the silver screen and actors such as Connery, Brosnan or Craig. Yet, it must be reminded that the cult character started its life on paper, under the pen of British novelist Ian Fleming, in 1953. Although the 1962 movie Dr. No was the first of the Bond books to be made into a film, it was the sixth of Fleming’s series, beginning with Casino Royale – which has been adapted twice, including in 2006 as part of the official series.

The James Bond 007 series is one of the most emblematic, fascinating, long-lasting and profitable of the entire cinema industry. 25 movies, hundreds of different locations all around the world, tons of bullets shot into the heart of villains… and some of the greatest actors of their generation have incarnated the role of the cult British spy. 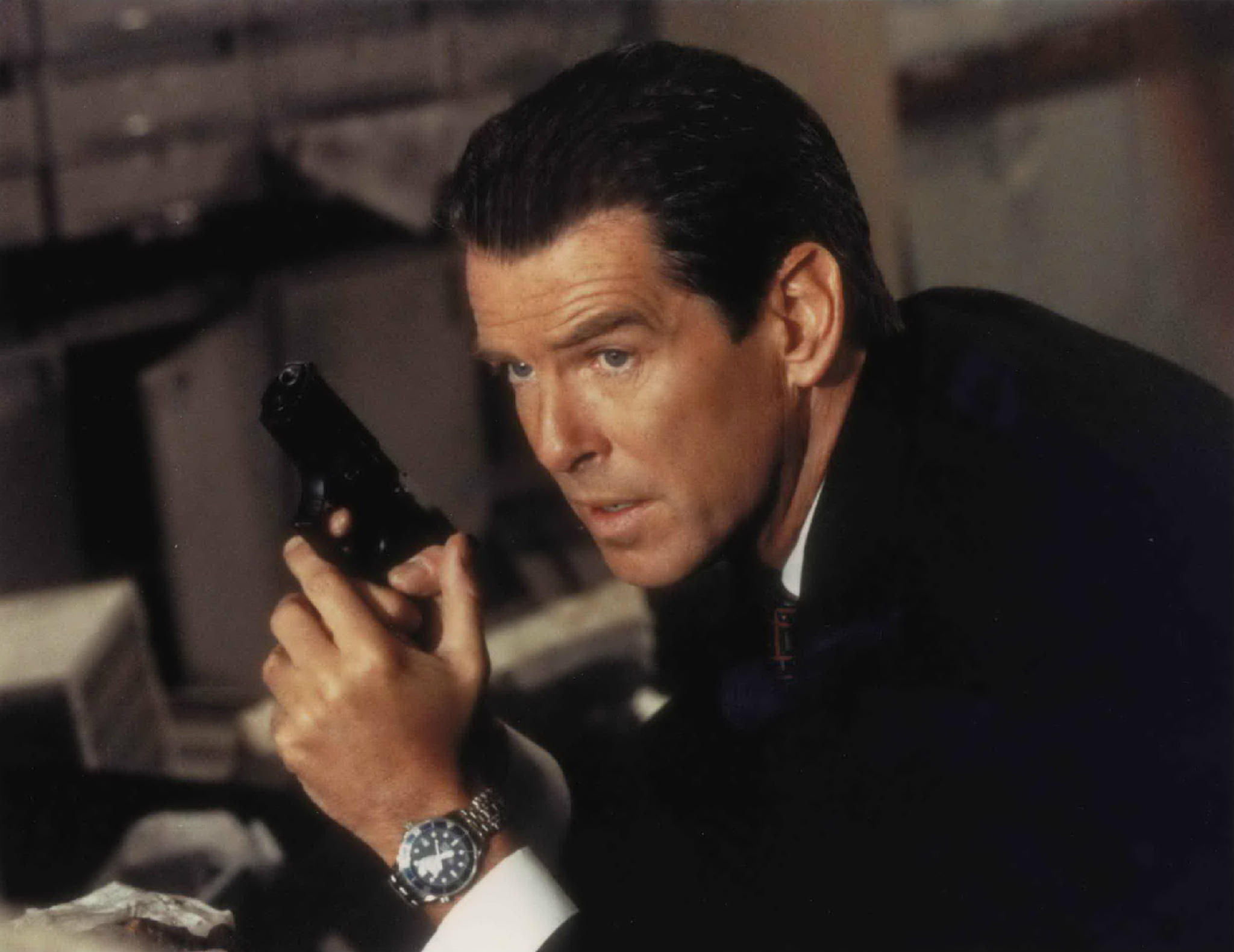 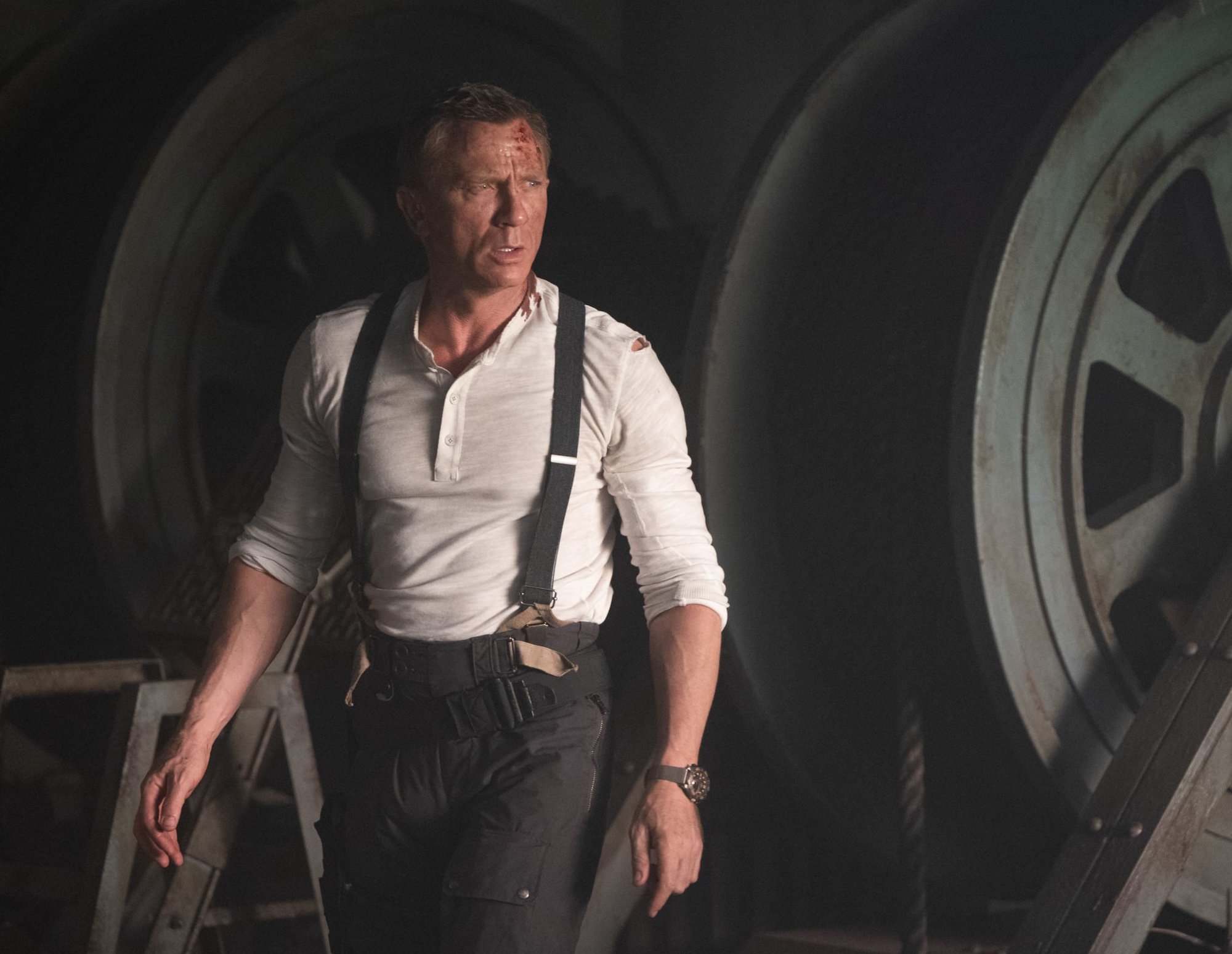 As said, various watch brands have been featured in the earliest James Bond 007 movies. Yet, none (except maybe one… you’ll recognize it) can claim the same cult status as the Omega Seamaster Diver Professional with a blue wave-styled dial… A watch that we all know now as the James Bond watch.

Omega and the James Bond 007 Franchise have been partnering since Goldeneye, 1995. In total, ten different watches have been used in all nine movies (under the Brosnan and Craig eras). The result of this long-lasting and emblematic collaboration isn’t the simple result of product placement. It’s an integral part of the redefinition of the entire character operated during the mid-1990s, under the guidance of Lindy Hemming, an Oscar-winning costume designer. She was responsible for casting 007’s watch in GoldenEye. This is how 007 will be seen for the first time, in 1995 Goldeneye, wearing the famous Omega Seamaster 300M Professional. Behind this choice for Omega were of course reasons such as the military background of Bond, but also the wish of Hemming to rethink the 007 character, to make him more modern and European. 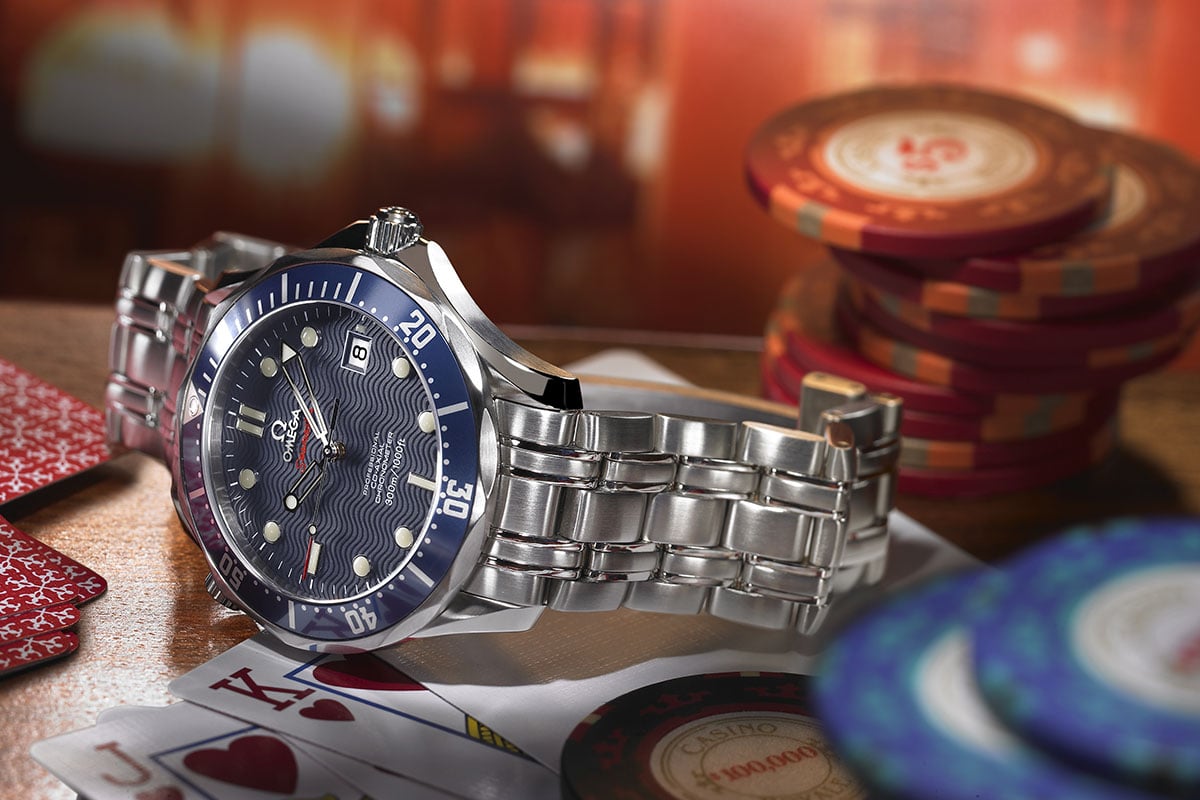 As we explained extensively in this in-depth article and video, no fewer than ten different watches have been featured in the nine movies covering the 1995-2021 period. It includes the classic, should I say iconic, Seamaster Professional 300m (either quartz or automatic) in 4 of the movies, and of course the beloved gadgets. In three of the movies, Bond wears two different watches, only when portrayed by Daniel Craig. This new character also marked the removal of the gadgets, marking a new turn in the Bond series, 007 becoming more realistic and more dramatic.

Gadgets will be back in the 2015 Spectre movie and are once again found in 2021 No Time To Die, the last film to star Daniel Craig in the role of James Bond. And these two movies also brought watches designed on purpose for the character, and later available to the public. We have all the details, movie per movie, about the watches worn by James Bond here.

Now, before we speak about the watch that Omega is about to release for the 60th anniversary of the Bond movies franchise, a quick reminder about the watch that was starring in No Time To Die, the Omega Seamaster Diver 300M 007 Edition. This somehow marked the return of the classic SMP watch on the wrist of 007, yet with multiple unique features to make it stand out. 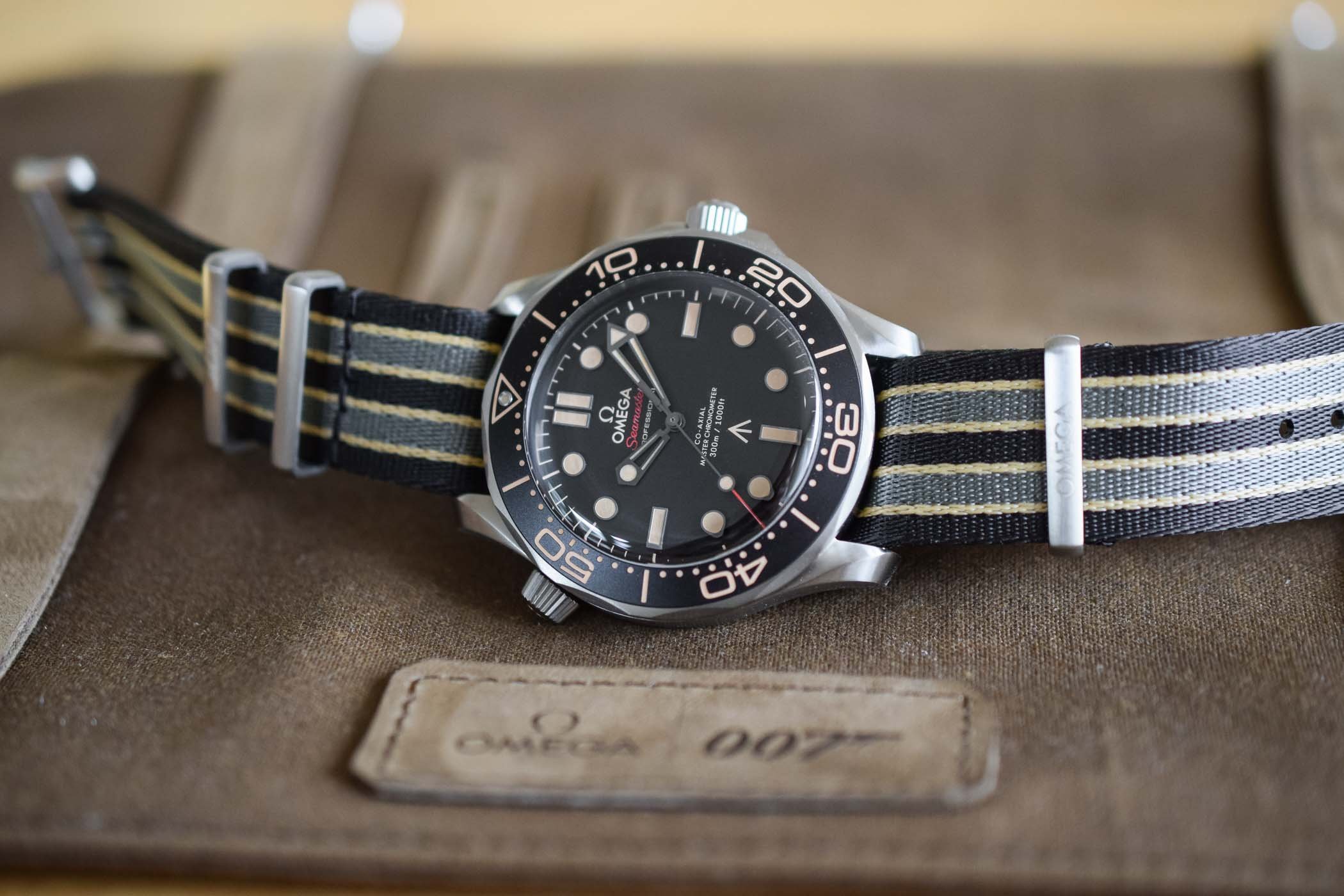 The watch is based on the classic Seamaster Diver 300M Master Chronometer, meaning that it shares most of its technical aspects – 42mm diameter, 300m WR case with twisted lugs, helium valve at 10 o’clock, unidirectional scalloped bezel and automatic Master Chronometer in-house calibre inside. What makes the 007 Edition unique is all about the combination of colours and materials, which results in a drastically more vintage look. 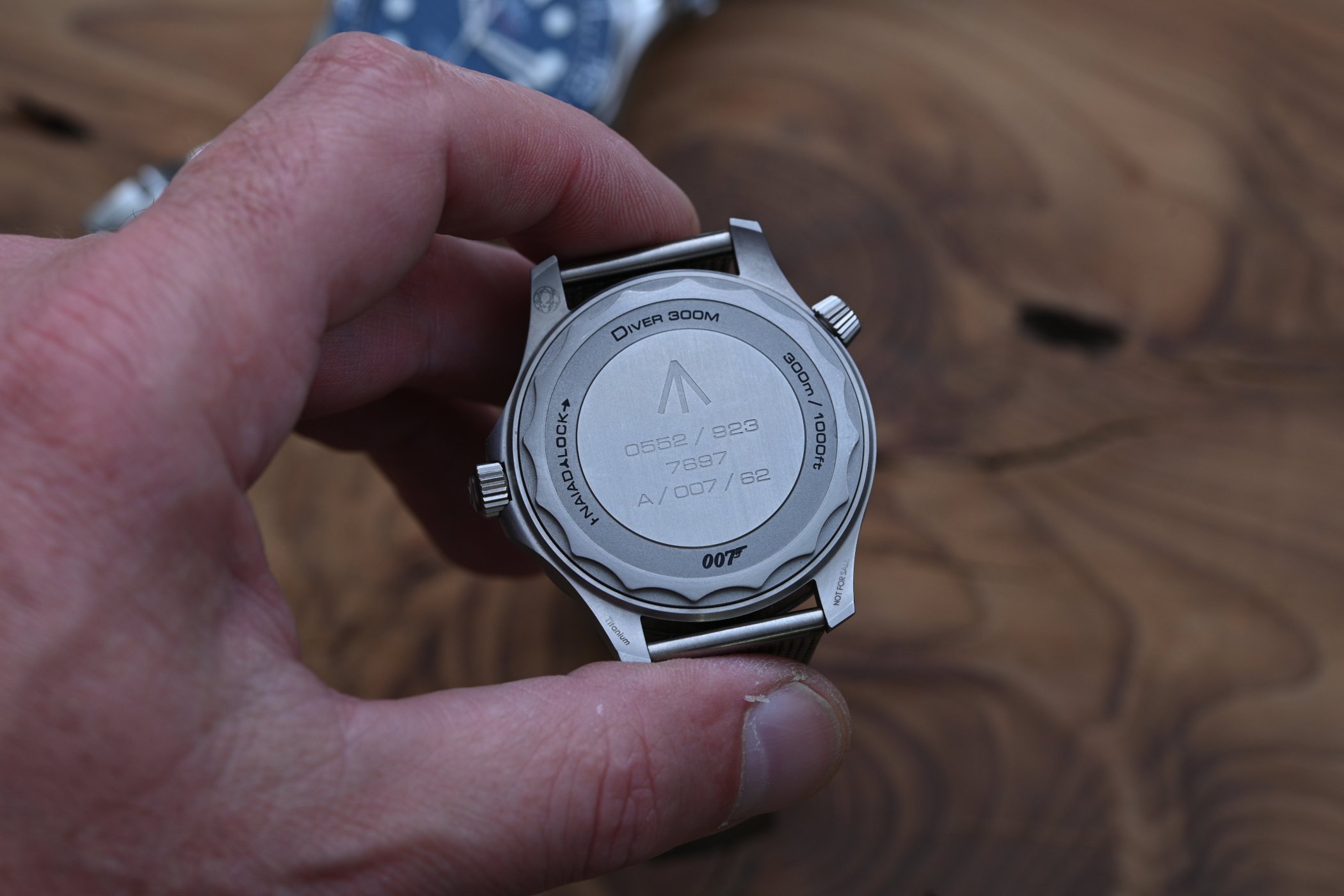 The 42mm x 13.15mm case is here entirely made of brushed grade 2 titanium and the bezel relies on an aluminium insert, with a so-called topical colour. There’s a unique box-shaped sapphire crystal too, protecting a dial matching the bezel – tropical-coloured aluminium, and applied indexes and hands with vintage-ish lume. And then there are multiple military inscriptions all over the watch, such as the broad arrow on the dial and various MoD-inspired engravings on the solid (no sapphire) caseback. Under it is the no-date calibre 8800. Finally, a choice of striped NATO textile strap or Milanese titanium bracelet was offered. Altogether, one of the coolest (if quite pricey) editions of the Seamaster Diver 300M.

At first, the new Seamaster 60 Years Of Bond – which is a special, not limited edition – looks like a variation around the design created for the 007 Edition of No Time To Die… Well, yes in some aspects, but this new watch goes further down the road in terms of evolution. It’s not only about the blue colour, or the steel case. There are many details to make it unique. 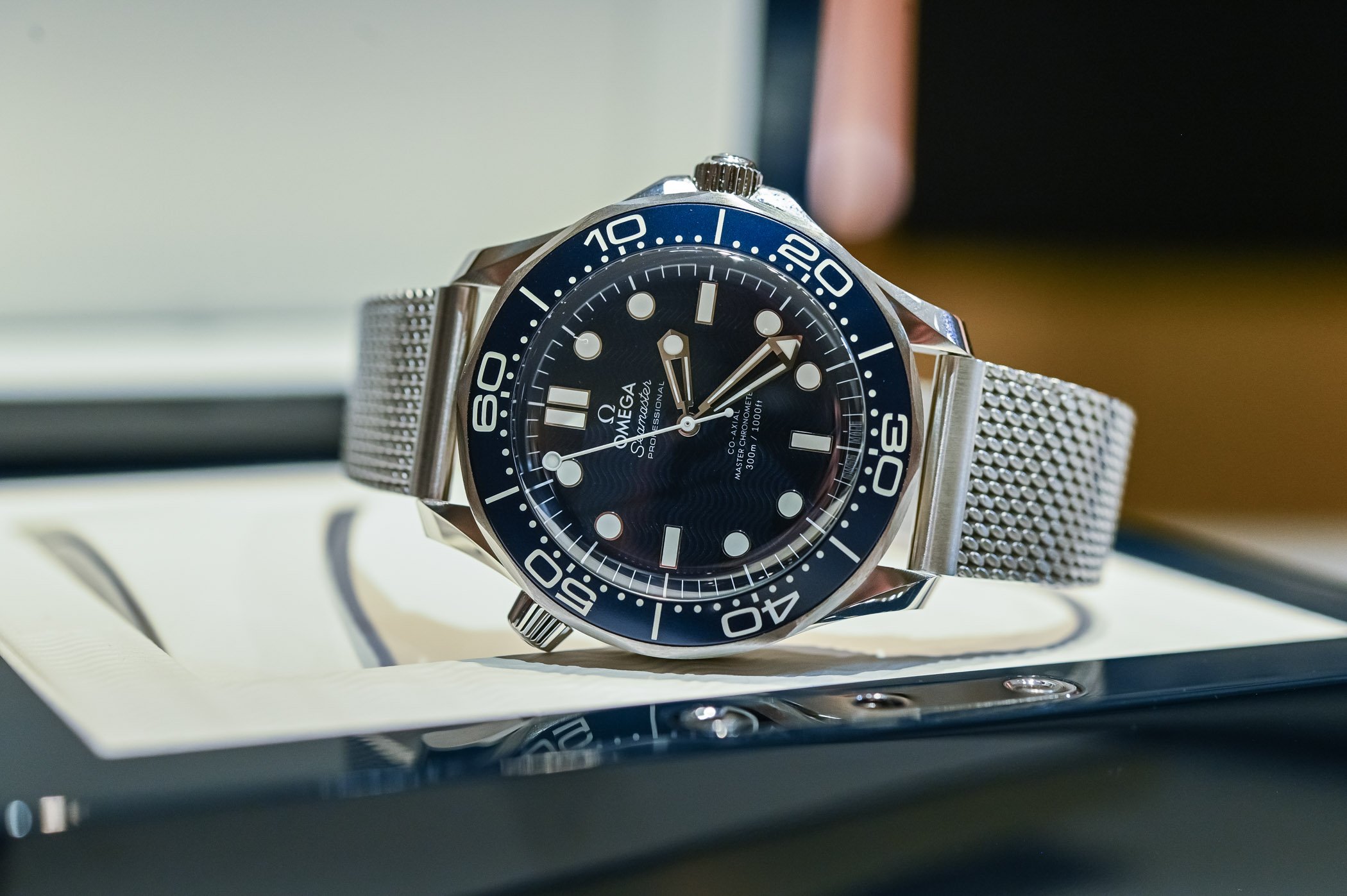 So first, the case. With this watch, Omega is somehow paying tribute to the original model of the Bond Watch, with a 42mm case made of stainless steel. It retains the classic SMP look, with its twisted lugs, its scalloped unidirectional bezel and a helium valve at 10 o’clock (yes, it’s still there, like it or not). Being back to steel, it’s also bringing back the classic finishing, with brushed and polished surfaces. Regarding the specifications, no surprises; 300m water-resistance, screw-down crown inserted into guards, screwed back. Note that Omega has retained the cool and charm-packed box-shaped sapphire crystal of the 007 Edition, and not the classic domed sapphire of the Seamaster Diver 300M. 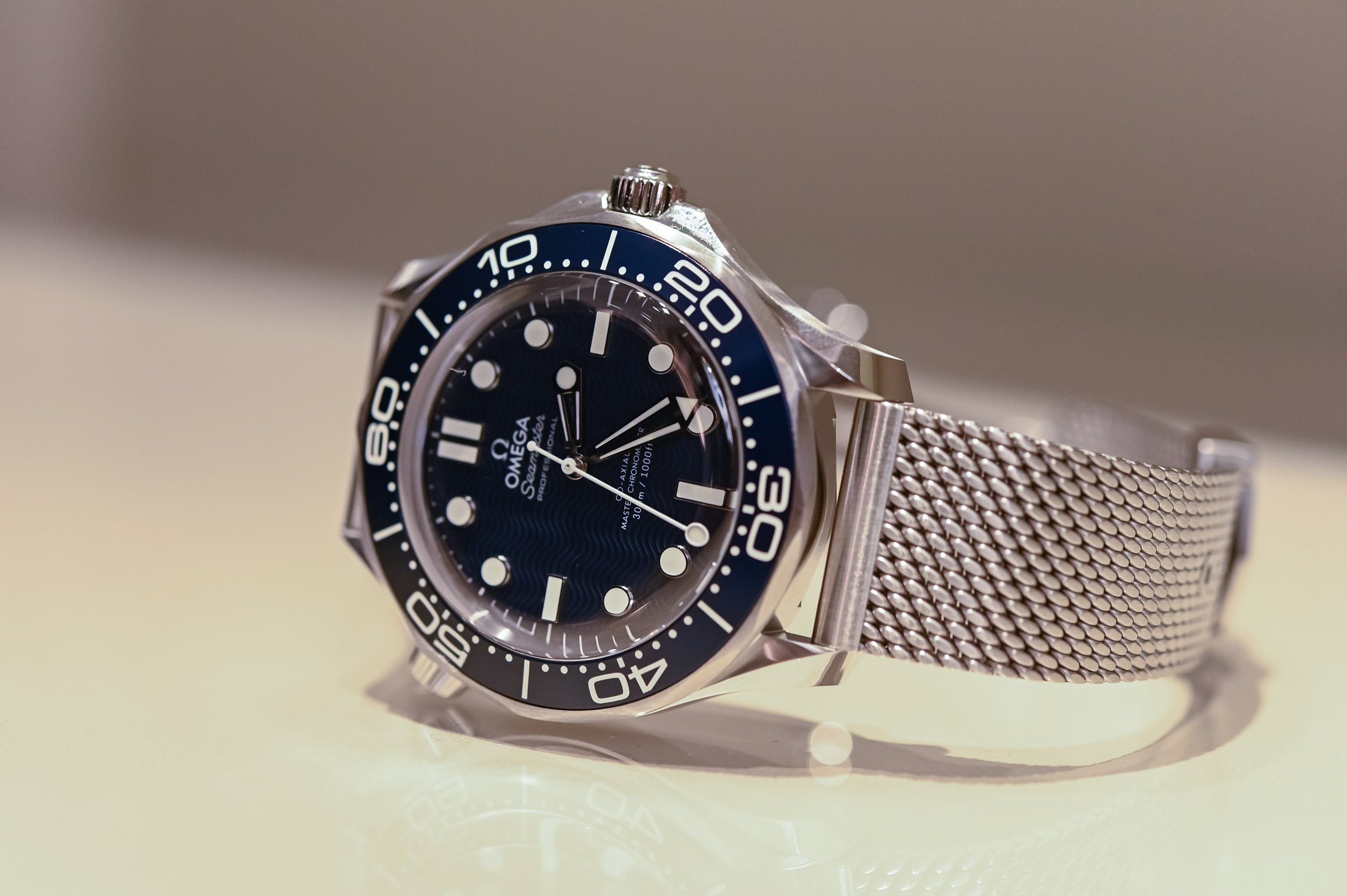 Now on to the details. Visually, there’s another important node to the past; the bezel’s insert. The Seamaster Diver 300M 60 Years Of Bond being all about 1990s retro, it comes (like the 007 model) with an aluminium bezel with a white scale (all markings filled with Super-LumiNova), and not a polished ceramic insert. And yes, it’s blue, just like it should be. Note that the blue colour is darker, more subtle, and less saturated than what’s found on the current SM 300M ceramic models, and thus pays homage to the early SMP watches. The final touch, the classic triangle marking the zero has been replaced by a 60 mark, a node to the anniversary the watch celebrates.

This tribute to the 1990s and early Bond watches continues on the dial… Yes, it’s back to the classic wave pattern, which is discreetly laser-engraved on the surface of the dial, and not engraved into it. Yes, just like the bezel, it’s oxalic anodized aluminium. And yes, it’s also carrying the same dark blue colour. In the same vein as the 007 edition, but with its own personality. It’s also a no-date watch, with modernly-coloured Super-LumiNova, meaning no faux-patina here. Also gone are the military markings. All in all, it has some youngtimer flair, and basically wants me to scream “yes please, Omega!” (sorry, but I love the idea of coming back to the original 1990s SMP look…) This new Seamaster 60 Years Of James Bond also comes with the model’s classic openworked hands, yet with an all-new lollipop hand, painted in white and with the luminous dot right at the edge. 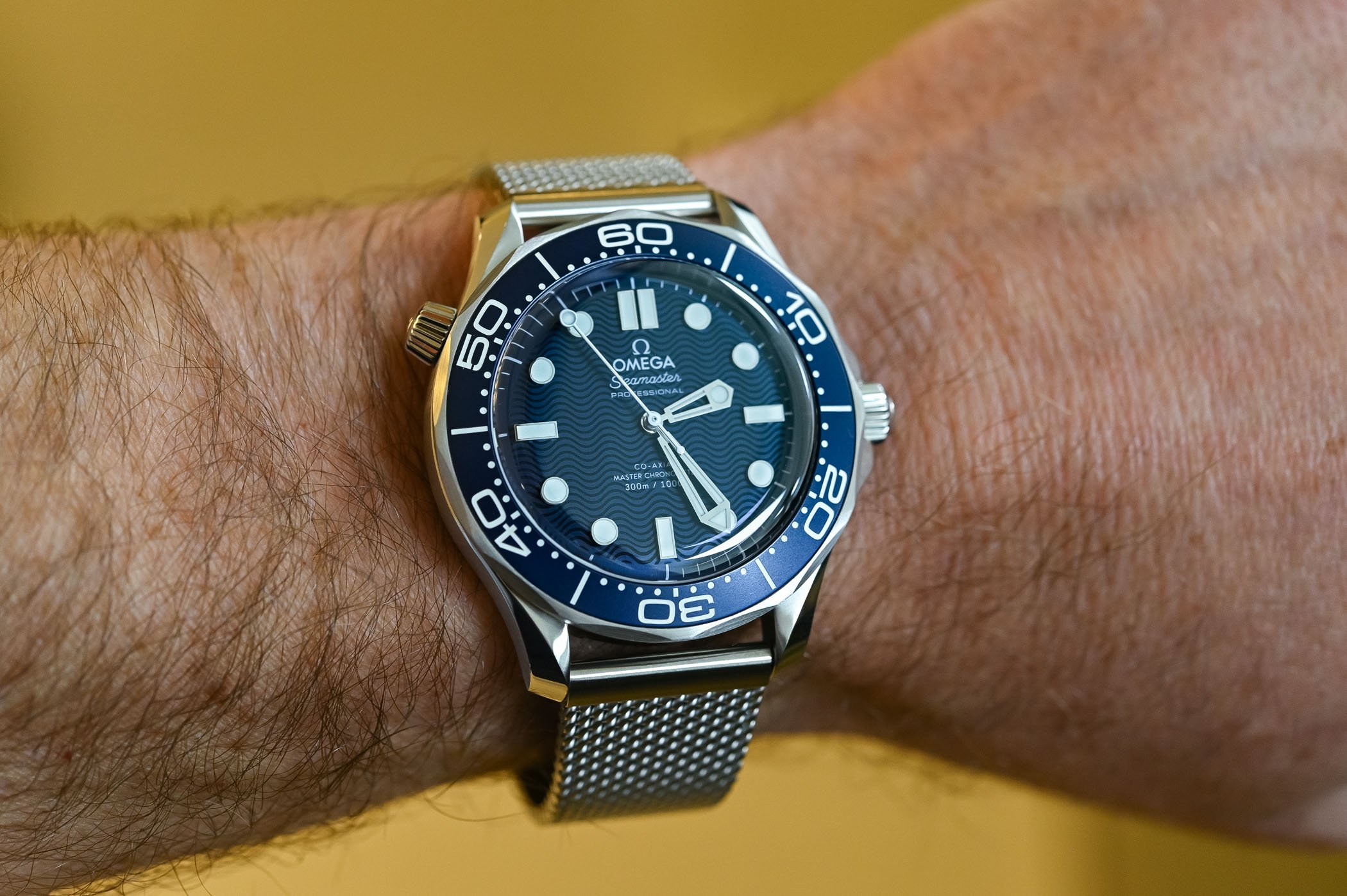 Inside the case, no major surprise either, as the Seamaster Diver 300M 60 Years Of Bond remains faithful to the automatic 880x base – here, the calibre 8806 to be precise. This 29mm in-house movement is, of course, Master Chronometer certified, equipped with a co-axial escapement and highly anti-magnetic. It boasts 55 hours of power reserve and beats at Omega’s unusual 3.5Hz frequency. Indications are the classic central H-M-S. 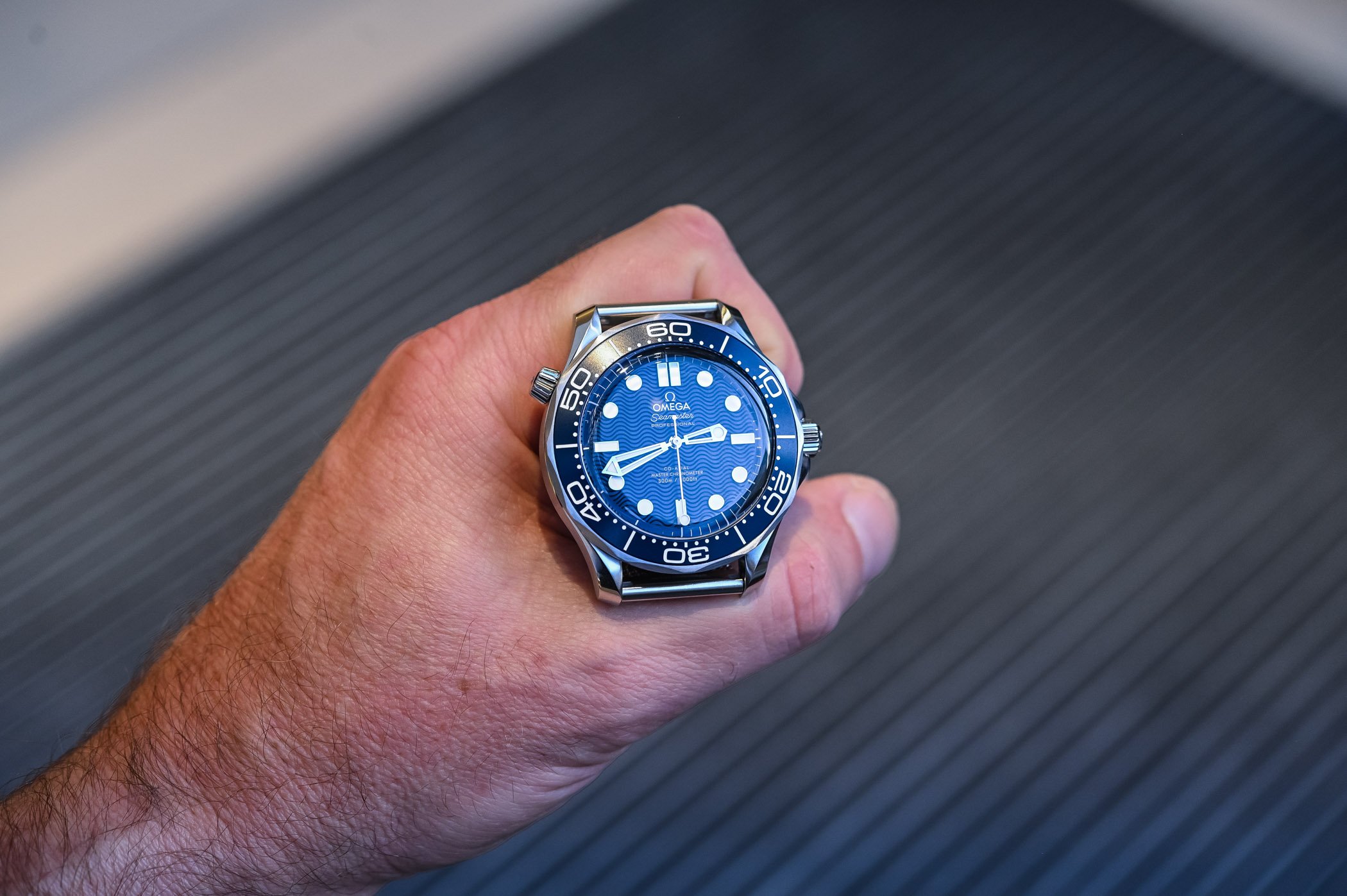 But where the Seamaster 60 Years Of James Bond really makes an impact, it’s when looking at the caseback. Remember the animation that Omega integrated into the Speedmaster “Silver Snoopy Award” 50th Anniversary? Well, the brand has done it again, this time with a Bond-theme animation. The caseback has a sapphire crystal, with the classic Bond twisted gun barrel on its surface – done by micro-structured metallisation. And below it, attached to the pinion of the seconds hand, is a rotating disc. And thanks to a combination of transparent and darkened surfaces, it magically shows James Bond’s silhouette moving and appearing just like the movie’s intro… Surely, it’s a bit of a gimmick, but it’s playful, very much in line with the watch and remains very discreet when you want to hide it. 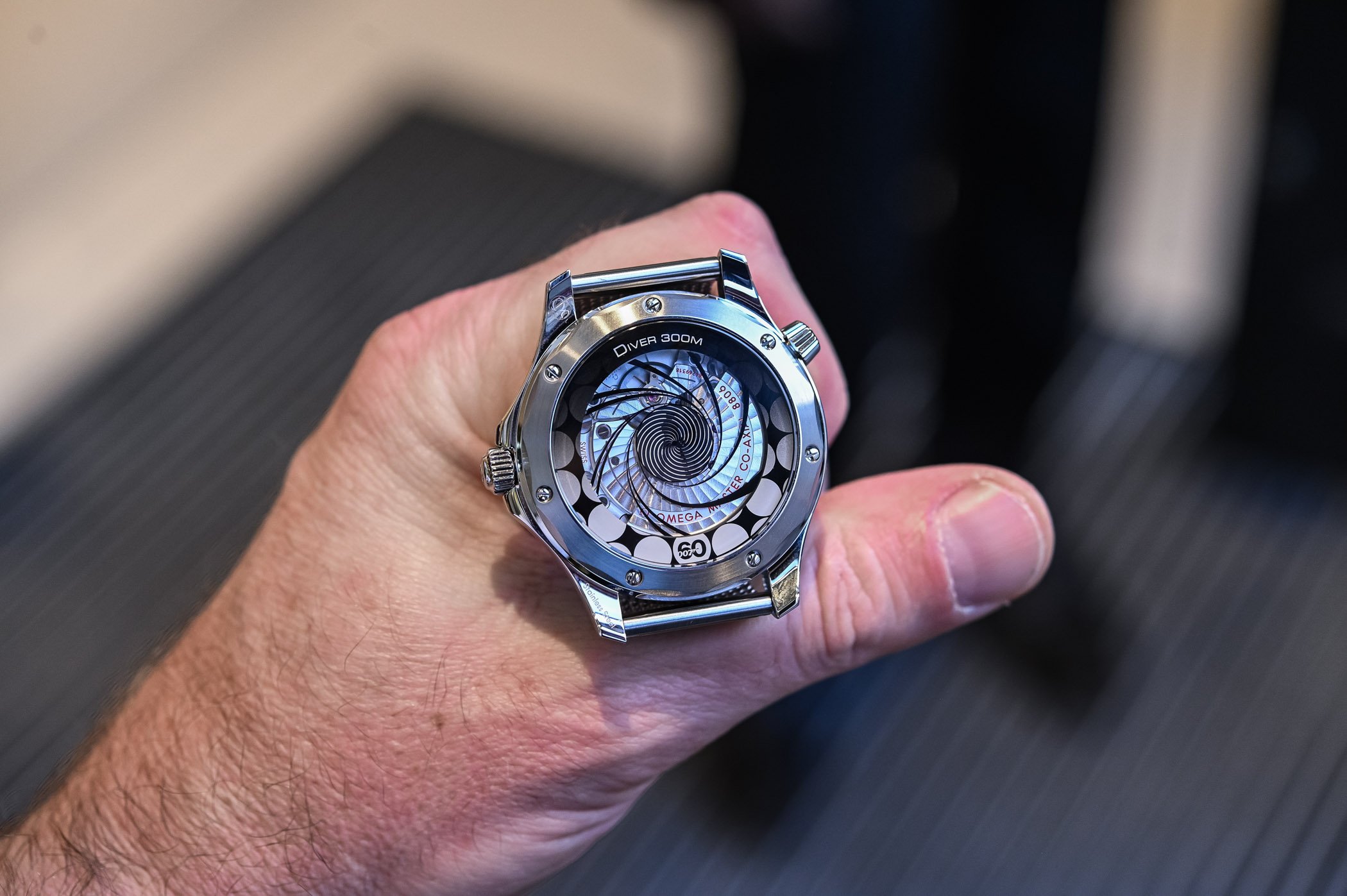 Finally, just like the 007 Edition, the Omega Seamaster Diver 300M 60 Years Of James Bond is worn on a Milanese bracelet, closed by a folding clasp. 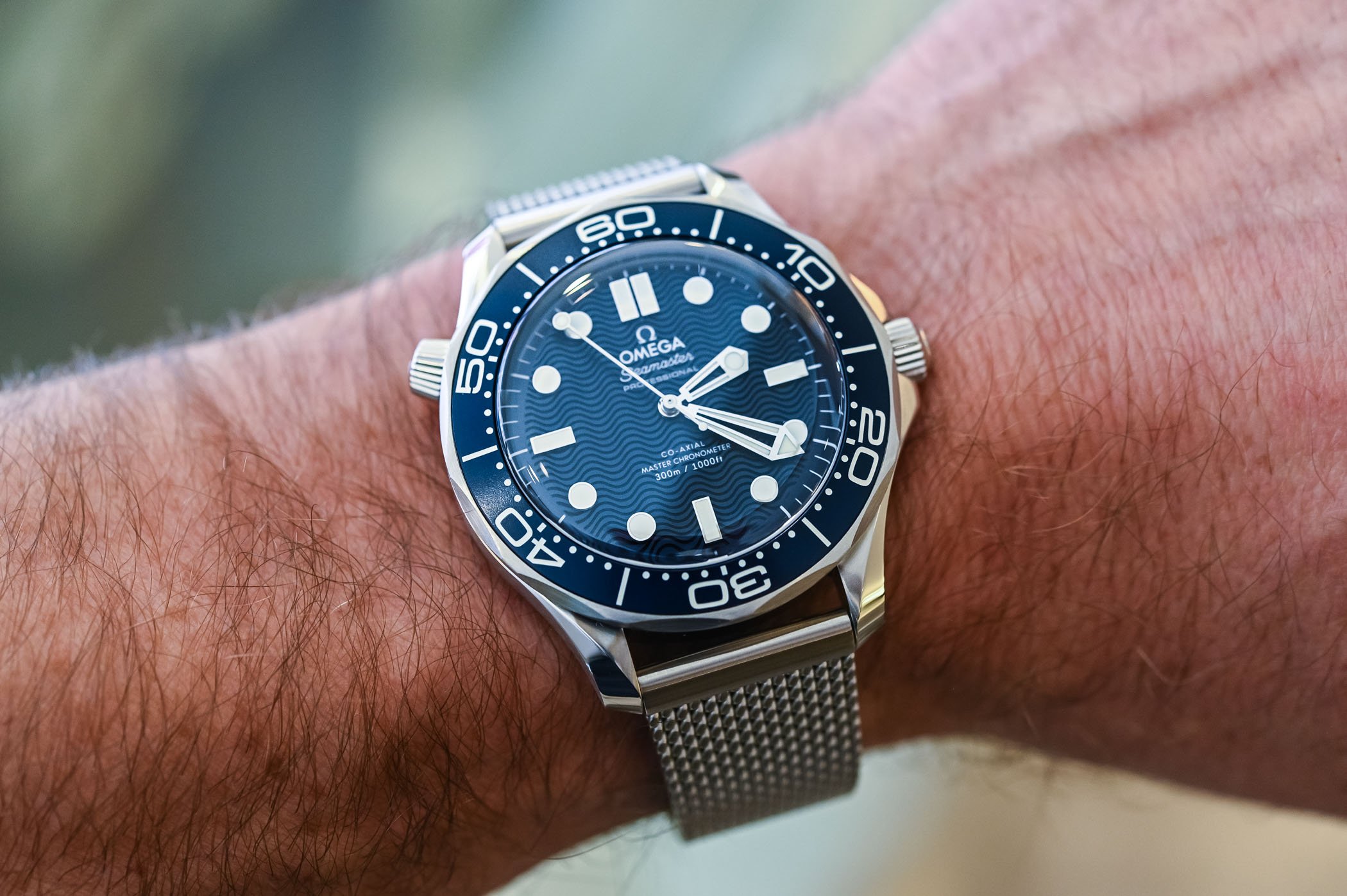