The motto ‘just different’ is clichéd and meaningless, but if any brand can pull it off, it’s got be MeisterSinger. And the best thing about it is that it’s not just different for the sake of being different. There’s real thought behind being different. This certainly goes for the signature single-hand display. And that is definitely the case with this latest introduction, the MeisterSinger Astroscope. With this watch, the men from Münster expand their astronomical tour with symbols from ancient times. 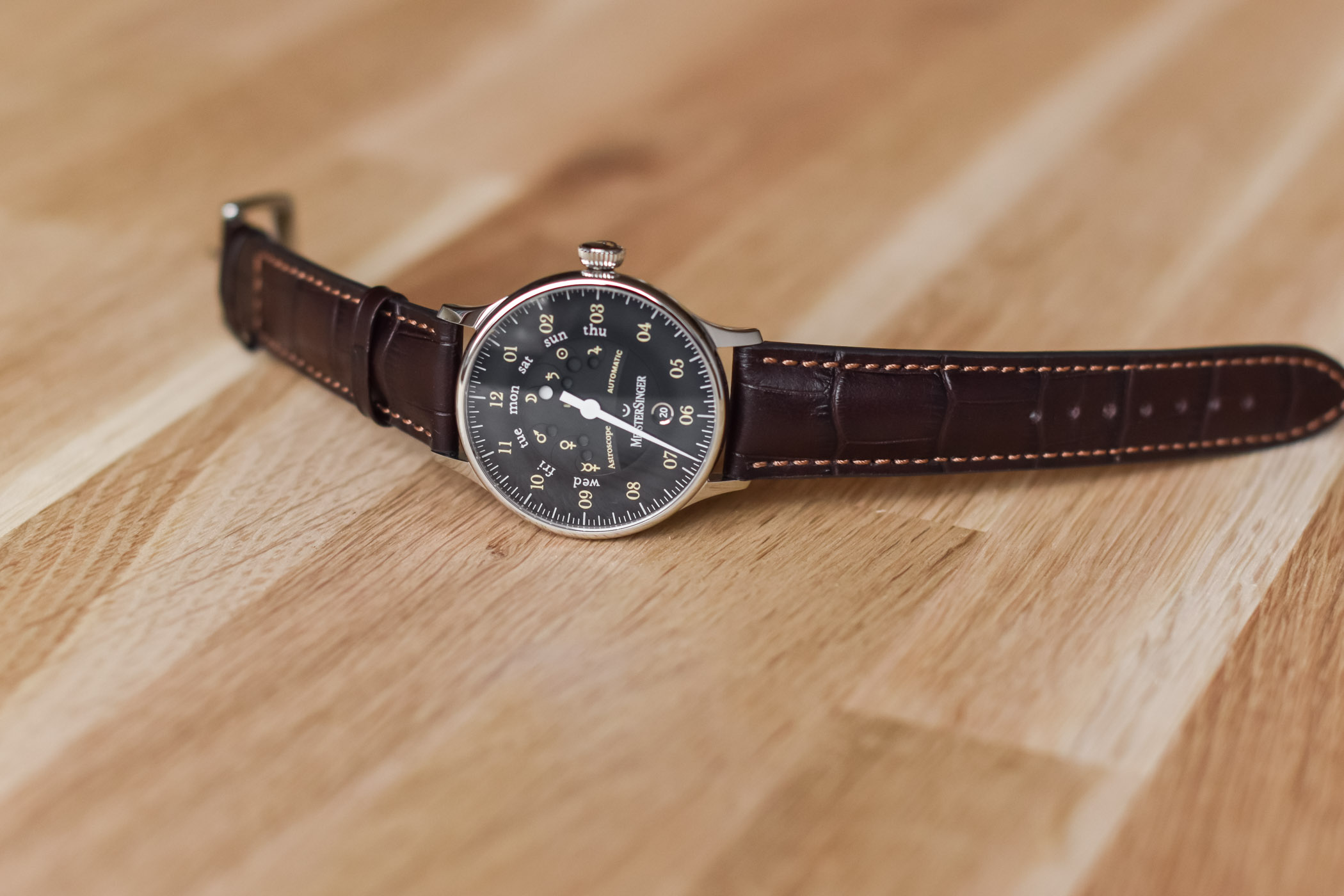 First a little disclaimer: I don’t want to come across as a MeisterSinger fanboy, but I have to admit that nearly all of the clocks in my house are MeisterSinger-clocks. In the rooms where I live and feel at home, I want to be aware of the time and forget about it at the same time. These minimalist clocks, with white dials and single-hand displays, give me a more approximative reading of the time. And it works. As the brand likes to say: ‘single-hand clocks aren’t bothered with the hectic passing of seconds, but display the bigger picture with great precision’.

Astronomical timepieces are quite new to MeisterSinger. In 2018, the company introduced the Lunarscope, which had a huge moon phase and was very well received by both press and customers. The slow transit of the moon fits nicely with the MeisterSinger philosophy that wants you to enjoy time in a slightly more relaxed manner. A complication like a chronograph wouldn’t really fit in with this thinking. So it was only logical that MeisterSinger came up with a second astronomical timepiece. 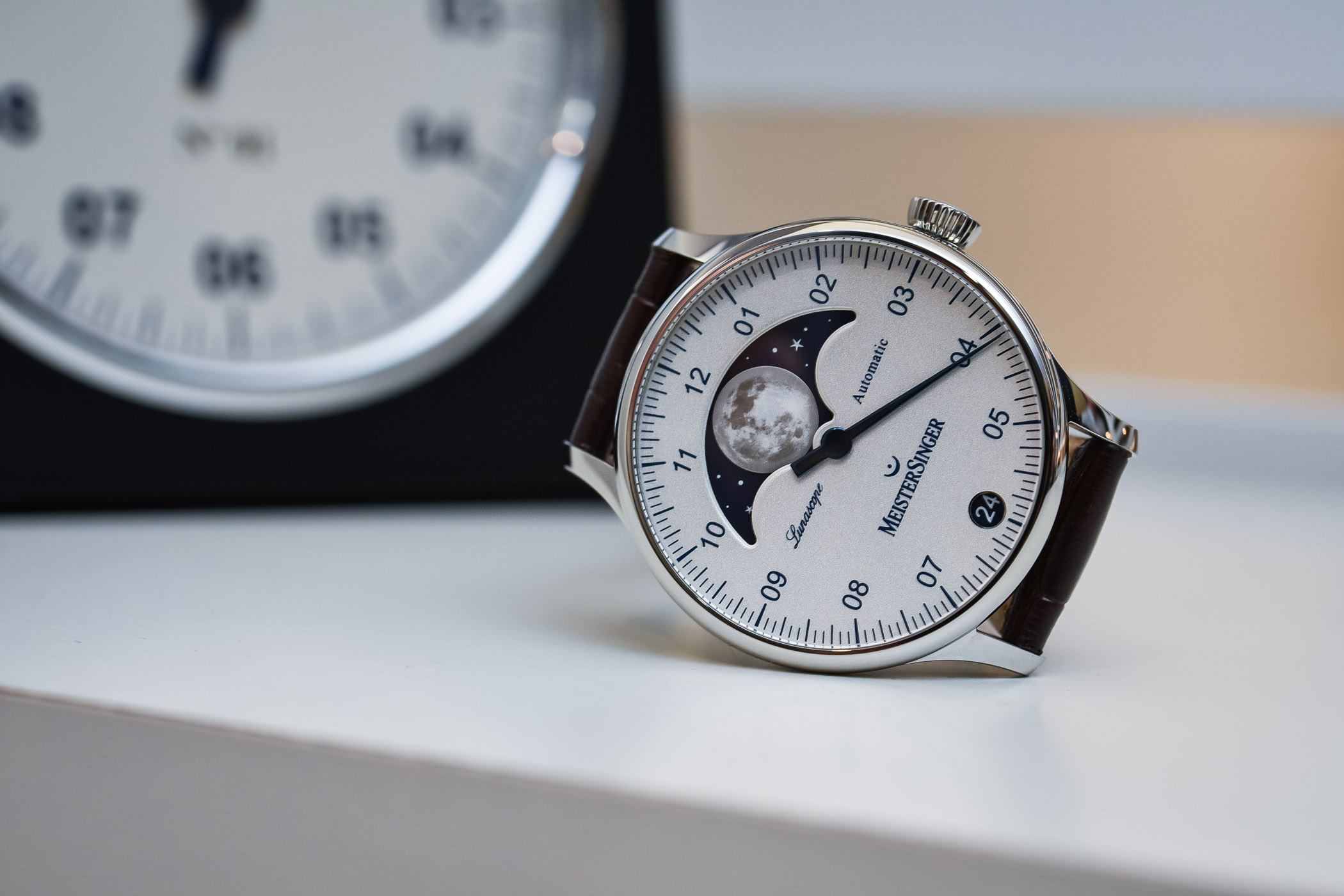 The MeisterSinger Astroscope needs some explanation. MeisterSinger always finds interesting new ways to tell the time, and this time it went back in time to antiquity. On the dial, we see the names of the days combined with the symbols for the heavenly bodies they were named after in most Western European languages: 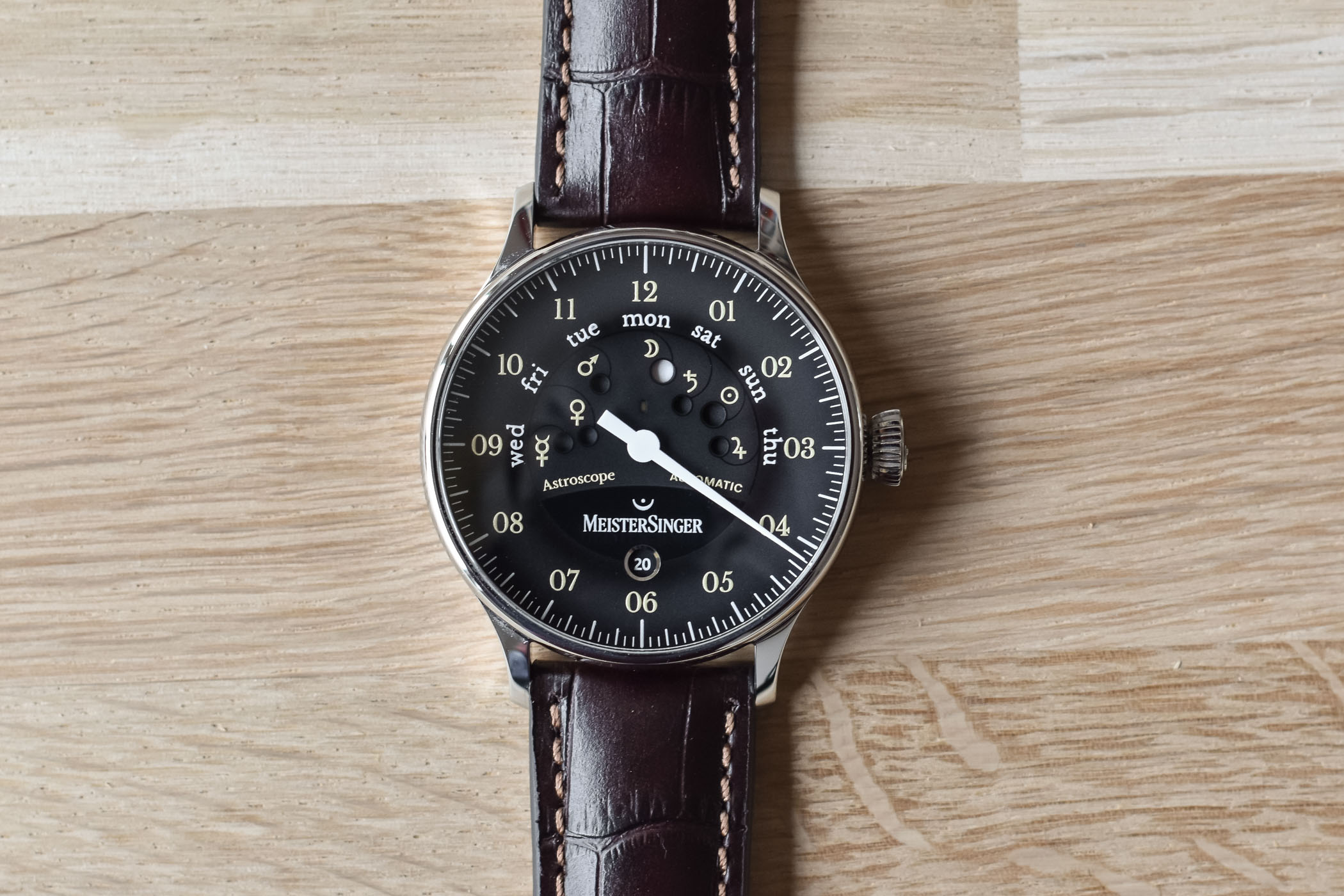 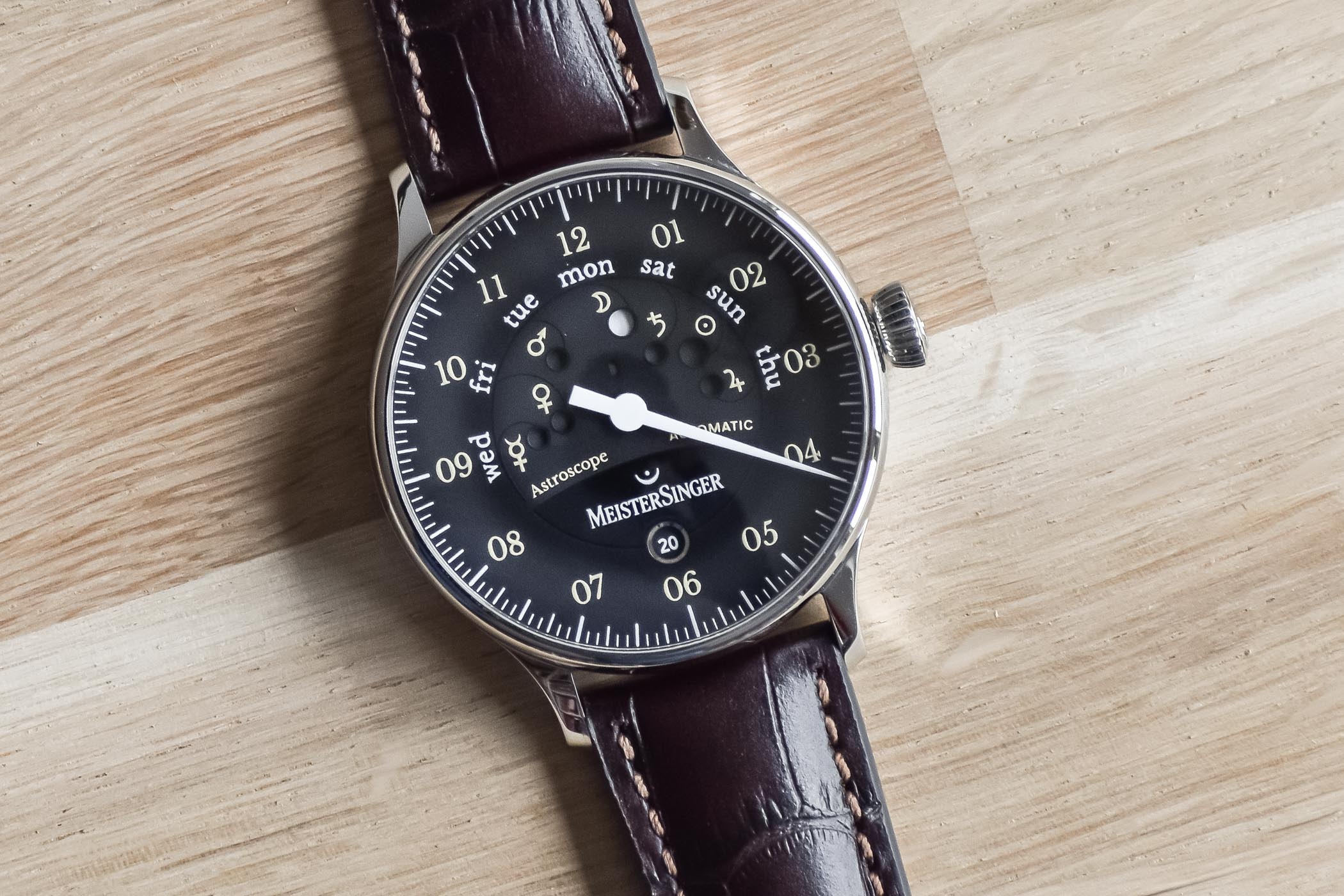 The days of the week are not displayed in a linear or radial fashion but wander back and forth in a constellation that only occurs every ten to twelve years in the night sky of the northern hemisphere. This will happen again in July 2020, as all the celestial bodies representing the weekdays will be visible there at the same time (except the Sun, obviously).

The white dot on the dial indicates the day of the week. In this photograph, it appears under the sign of the Moon/Monday. The following day, Mars/Tuesday is to the left of Monday, and on Mercury/Wednesday the white dot will appear at around the 9 o’clock position on the dial.

In reality, the mechanics don’t jump back and forth. Under the dial, a large weekday disk with a number of white dots moves one step further from one day to the next, always moving in a circle, just as the heavenly bodies would.

The Astroscope is powered by a mechanical movement with a base movement by Sellita (SW220) and an added module designed by MeisterSinger. To the trained eye, this movement may seem a bit basic; however, it is an accurate and reliable asset. In all, the finishing is very decent for a watch in this price category. The practical details are all that you would expect: 38-hour power reserve, 5 bar water-resistance and a warranty of two years. It also shows the date at 6 o’clock. 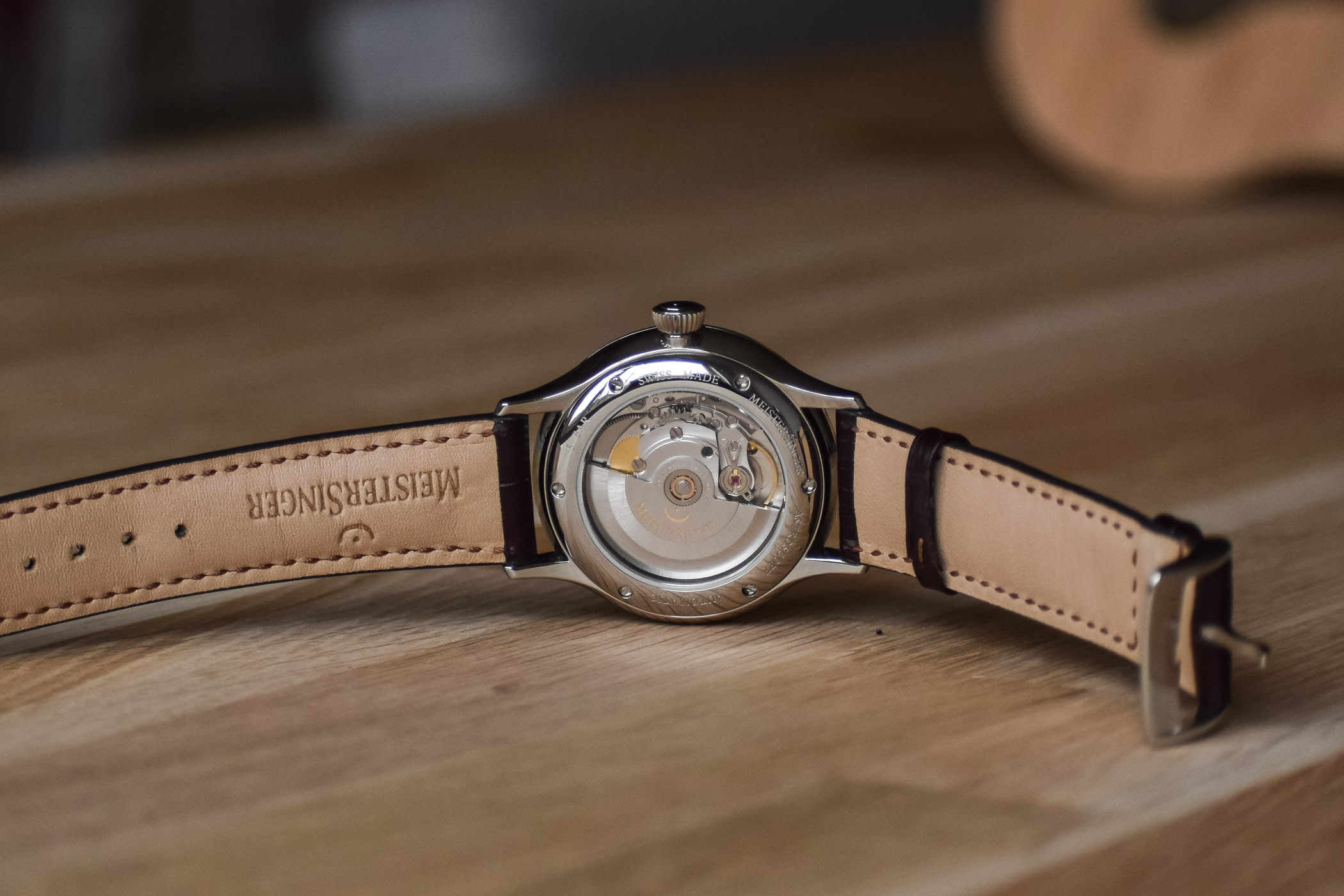 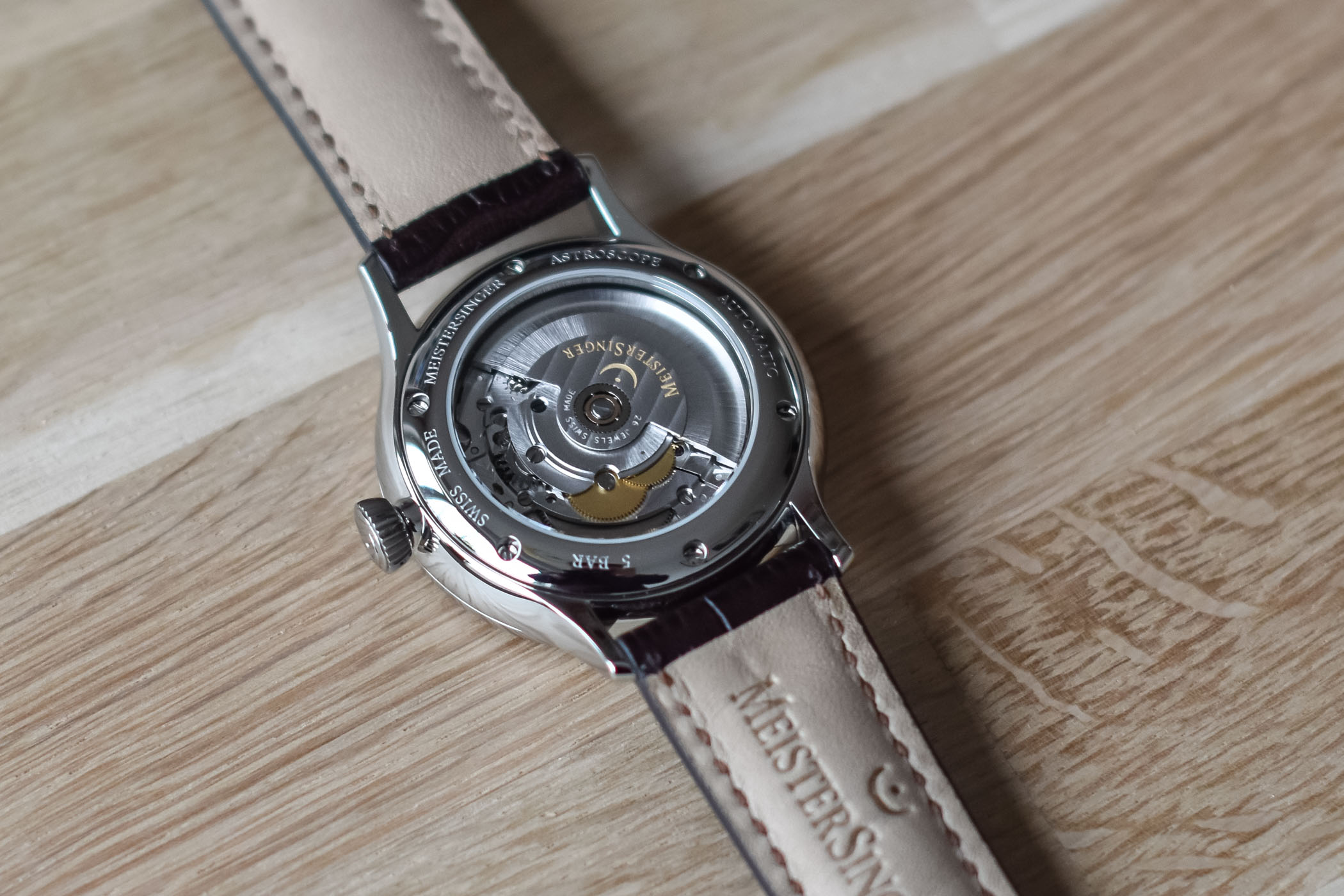 Familiar on the wrist

From the moment you put the watch on your wrist, it feels right at home. The size is good for nearly every wrist (40mm in diameter) and the lugs are just long enough to make the watch wear comfortably. It can be worn every day, with a suit at work or attending a rock concert. The watch doesn’t really have a bezel, which makes the dial really stand out. It is extremely legible if you’re used to the one-hand time indication, of course. To me, that has never been a problem, but I’ve heard people complain about it. 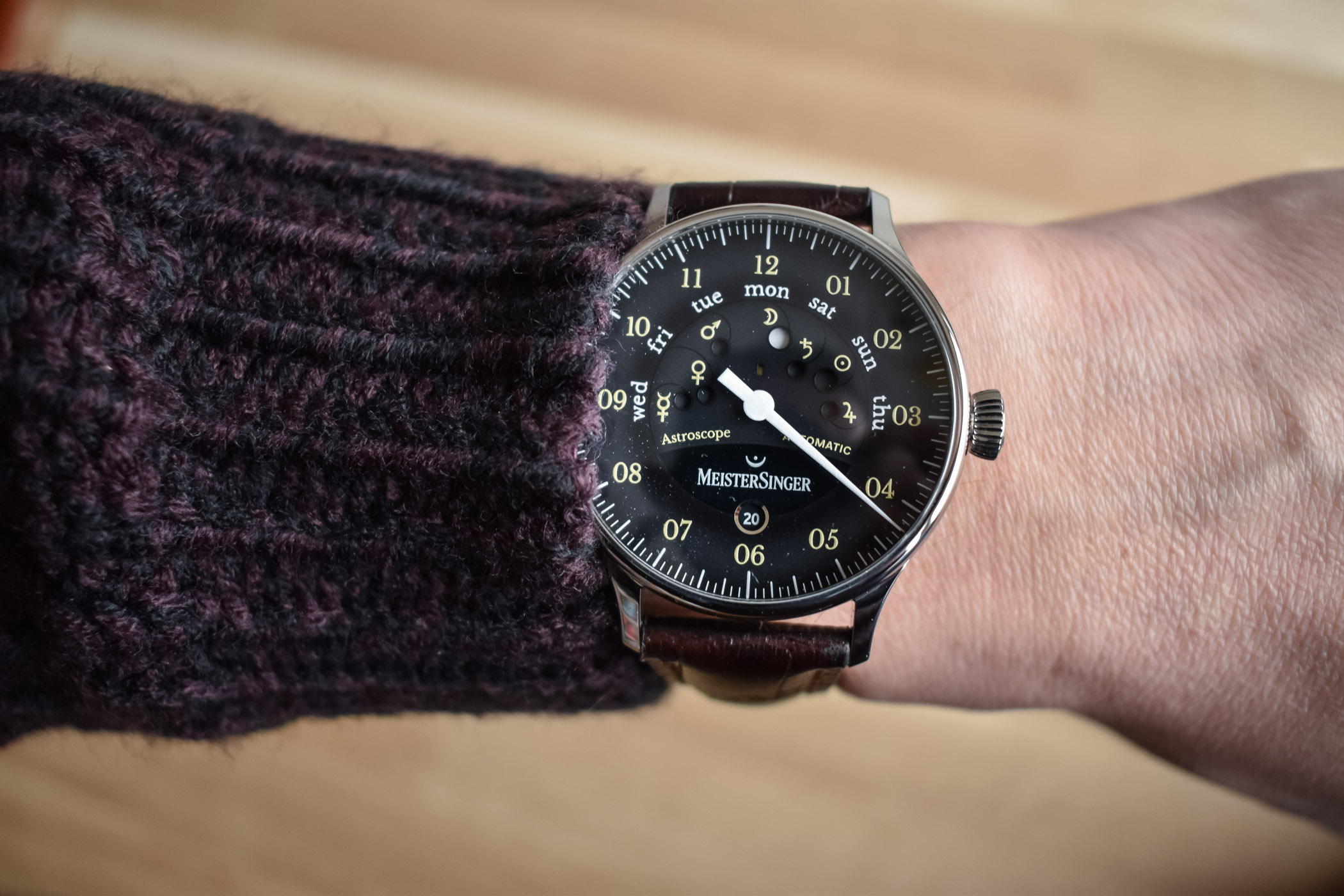 The watch I tested had a blackish dial (slightly patinated) that MeisterSinger likes to call black-old radium. There is also a version in blue-old radium, which has bright blue Roman numerals.

MeisterSinger watches always have a certain instrumental feel to them. They’re distinctly German, but not in the classic Glashütte sense. Münster is located in the industrial west of the country, and so the approach is a little bit more instrumental. The dials are always kept clean and sober. Even for this piece, with its astronomical indications, the time is still very legible. The big white hand really stands out and the symbols are not really distracting. I imagine you won’t even notice them after a while. Even the date indication at six o’clock is discreet. The case is made of steel and the crown is slightly oversized. The overall design of the dial is nicely balanced, which is quite an achievement given the asymmetrical shapes on it. 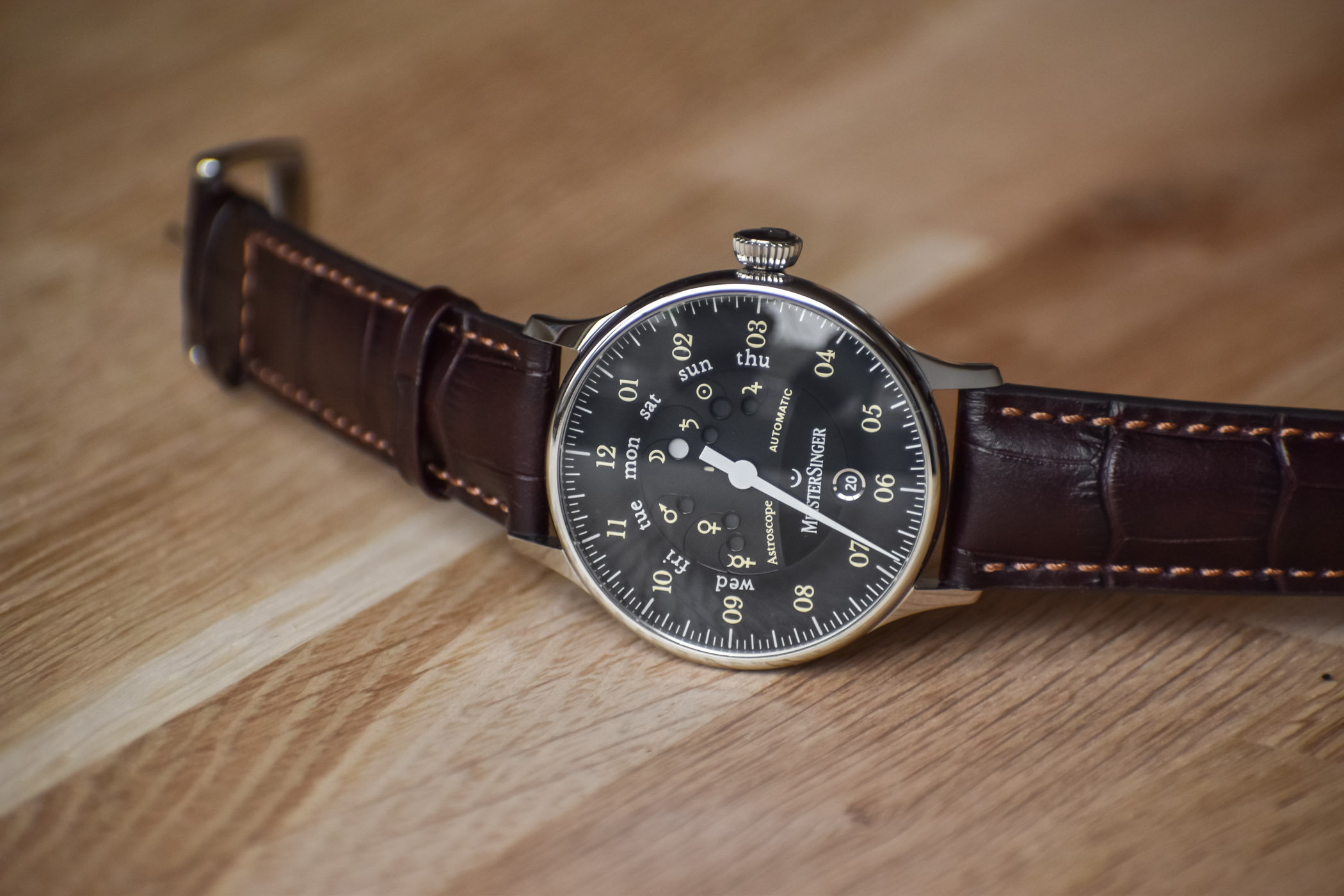 The watch I tested had a dark brown leather (with faux crocodile grain) strap with a buckle. A lighter variety is also available. I guess the dark brown one does the trick fine; it’s the classic choice.

If there is one thing I personally would love to see changed, it is the glass. When I visited MeisterSinger a couple of months ago, I told Managing Director John van Steen my opinion about it: it’s lovely to see a domed glass, but all MeisterSingers have a certain distortion if you look at them from the side. His reply made sense. Van Steen told me this sort of glass is a MeisterSinger signature. This bulging allows for a better view of the dial, as a magnifying glass would. And they’re proud of it. 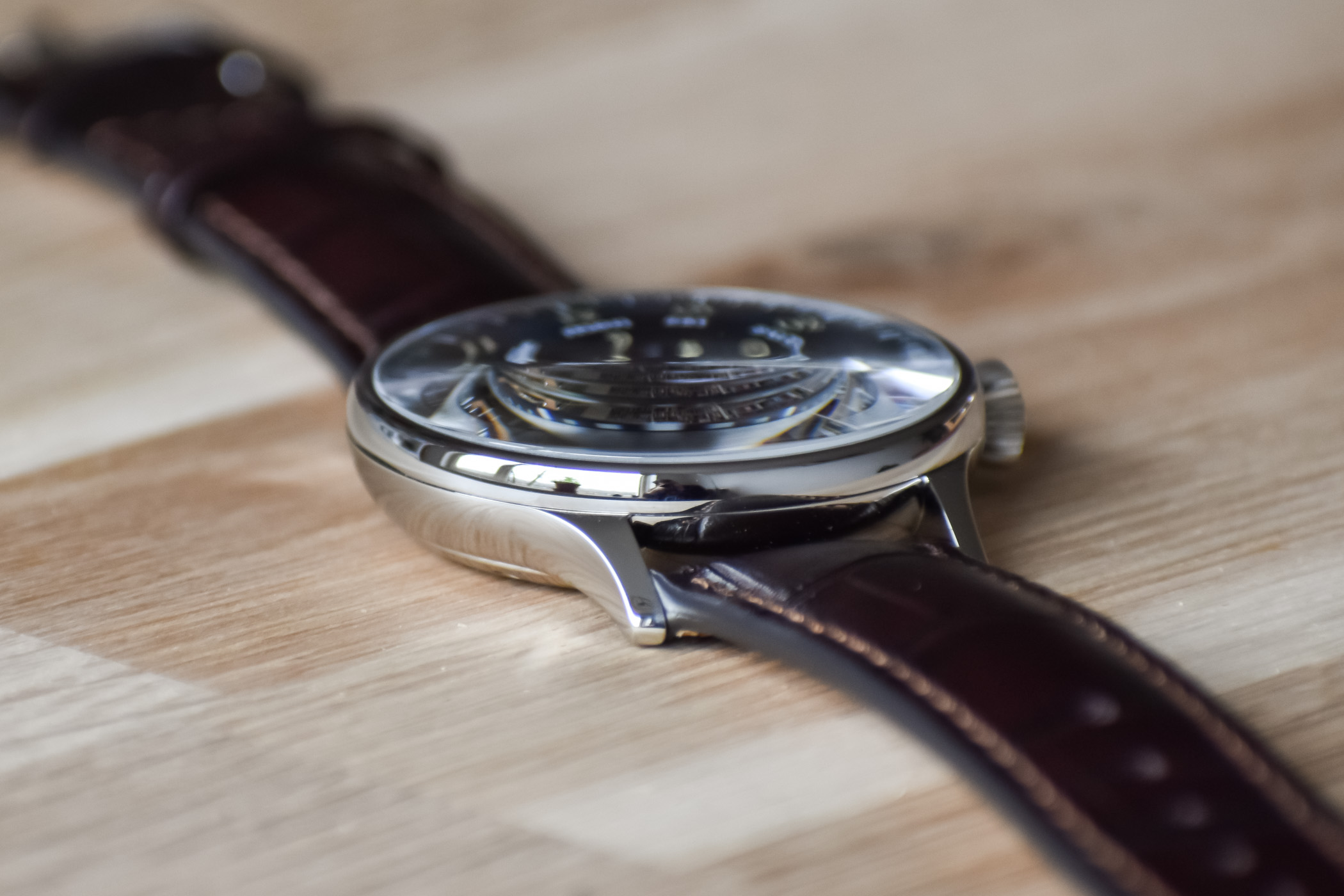 And that actually is the general impression I have from everything that happens at MeisterSinger. Everything happens for a reason there. Having worn the watch on the wrist for a couple of days, I can attest to the fact that this it has a real quality feel. The appreciation of unusual watches is not for everyone and don’t think you’ll impress any Janes with this timepiece in the Urban Jungle. This one is more likely to attract the educated ladies who love a good stroll under the stars.

The watch will be available as of March/April 2020. It is not a limited edition, although we expect the actual production numbers to be quite limited. It will be priced at EUR x,xxx.