Continuing its expansion strategy, Maurice Lacroix presents the Aikon Chronograph Skeleton, the first skeletonised chronograph movement in its Aikon Automatic line-up. The openworked chronograph movement is not new; it was first featured in the Masterpiece collection and reappears today in the virile case of the brand’s vision of an accessible luxury sports watch. The modern, technical look of this newcomer is underlined with the grey-on-grey composition with black markings and barely a trace of colour. Let’s have a closer look at this brand new (and bold) model. 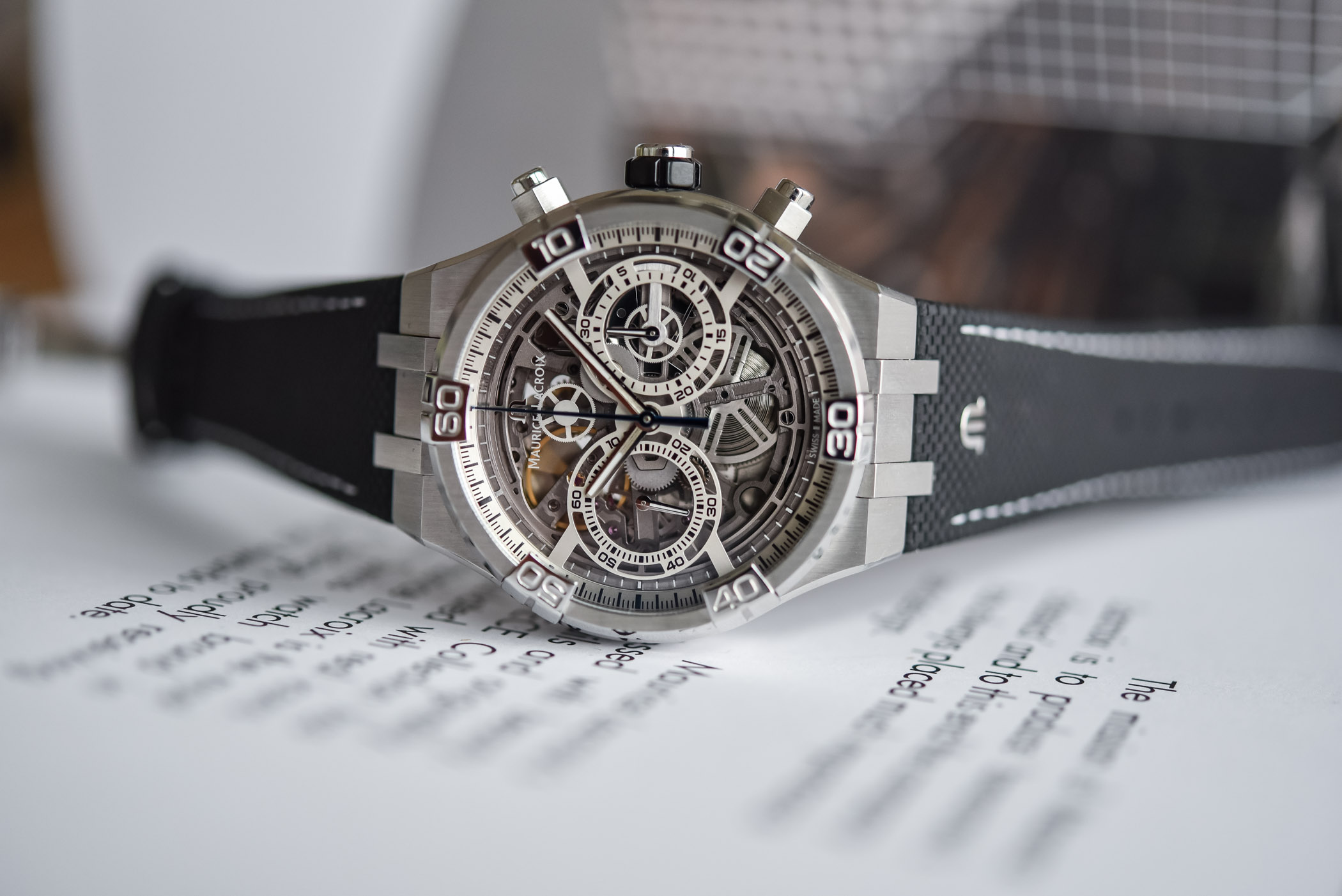 The Aikon collection was launched in 2016 as a rebirth of the Calypso line from 1990, initially powered by quartz movements. As Maurice Lacroix’s rendition of the luxury sports watch, the Aikon pieces have integrated cases and a distinctive bezel decorated with six double claws. Movements are outsourced Swiss automatics, but this helps keep prices at a surprisingly accessible level. Along with an existing portfolio of chronographs, 3-hands-and-date, an Automatic Skeleton or the intriguing Aikon Mercury with its patented ‘free-hand’ display, this new release confirms that the Aikon is gaining in complexity. 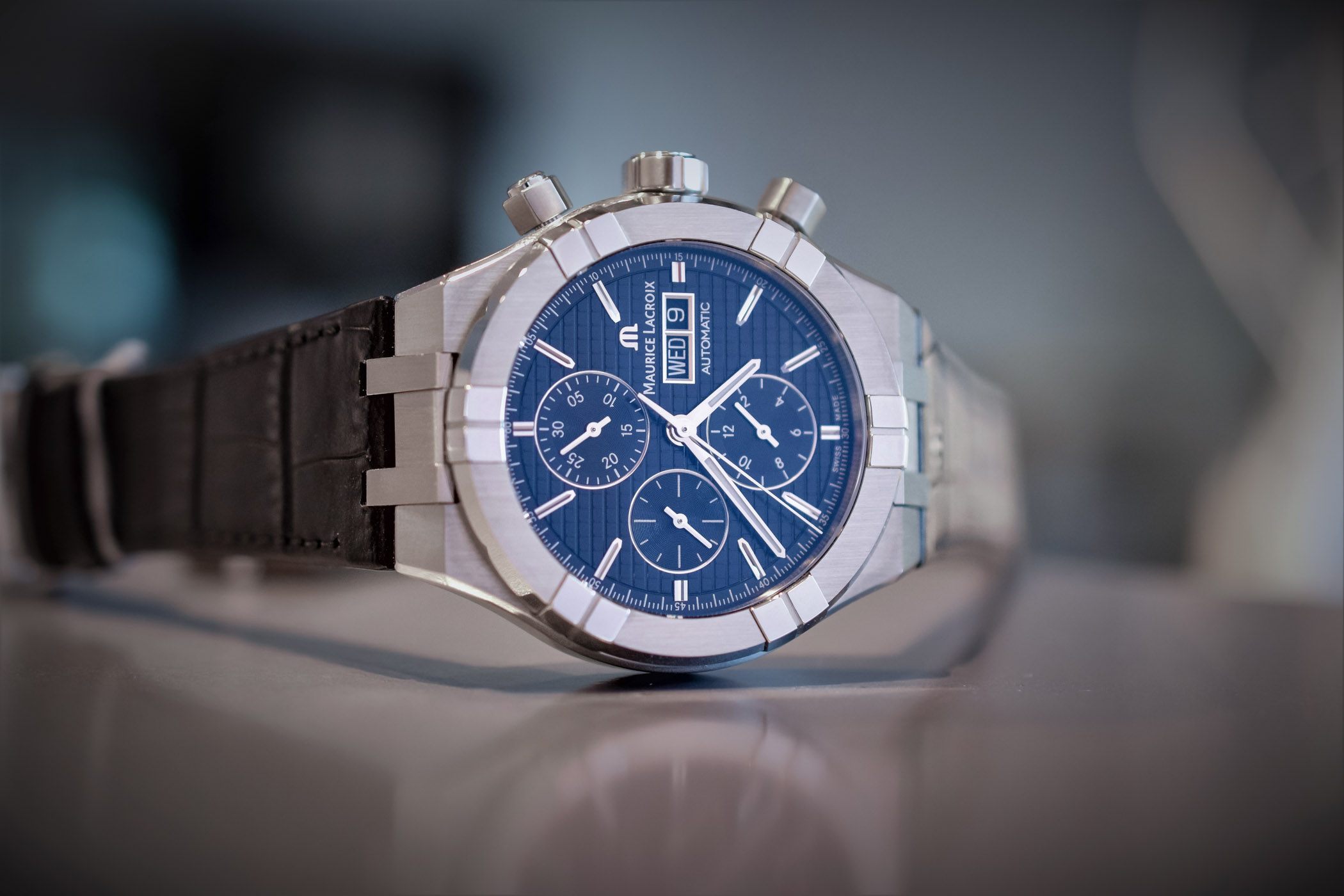 The original design of the ML Aikon Automatic Chronograph, as presented in 2018. With the addition of the new openworked movement, the design has been updated.

This is what I would define as an action-packed watch. Not just because of its ability to record elapsed times and its 200m water-resistance, but because of its complex case and dial. Although it is being welcomed into the Aikon family, it seems to share more features with the robust Aikon Venturer. A quick analogy might help: if the Aikon is the Royal Oak, the Aikon Venturer is the Royal Oak Offshore, a testosterone-infused version of the original.

The stainless steel hull retains its dynamic Aikon architecture with a barrel-shaped case, sharp, sloping integrated lugs and a round bezel. The 44mm diameter and 15mm height are pretty standard dimensions for a sports chronograph, but the case has undergone changes to adopt its new personality as an openworked chronograph. There was already a chronograph model, with closed dial (as seen above) but the new movement requires some evolutions. 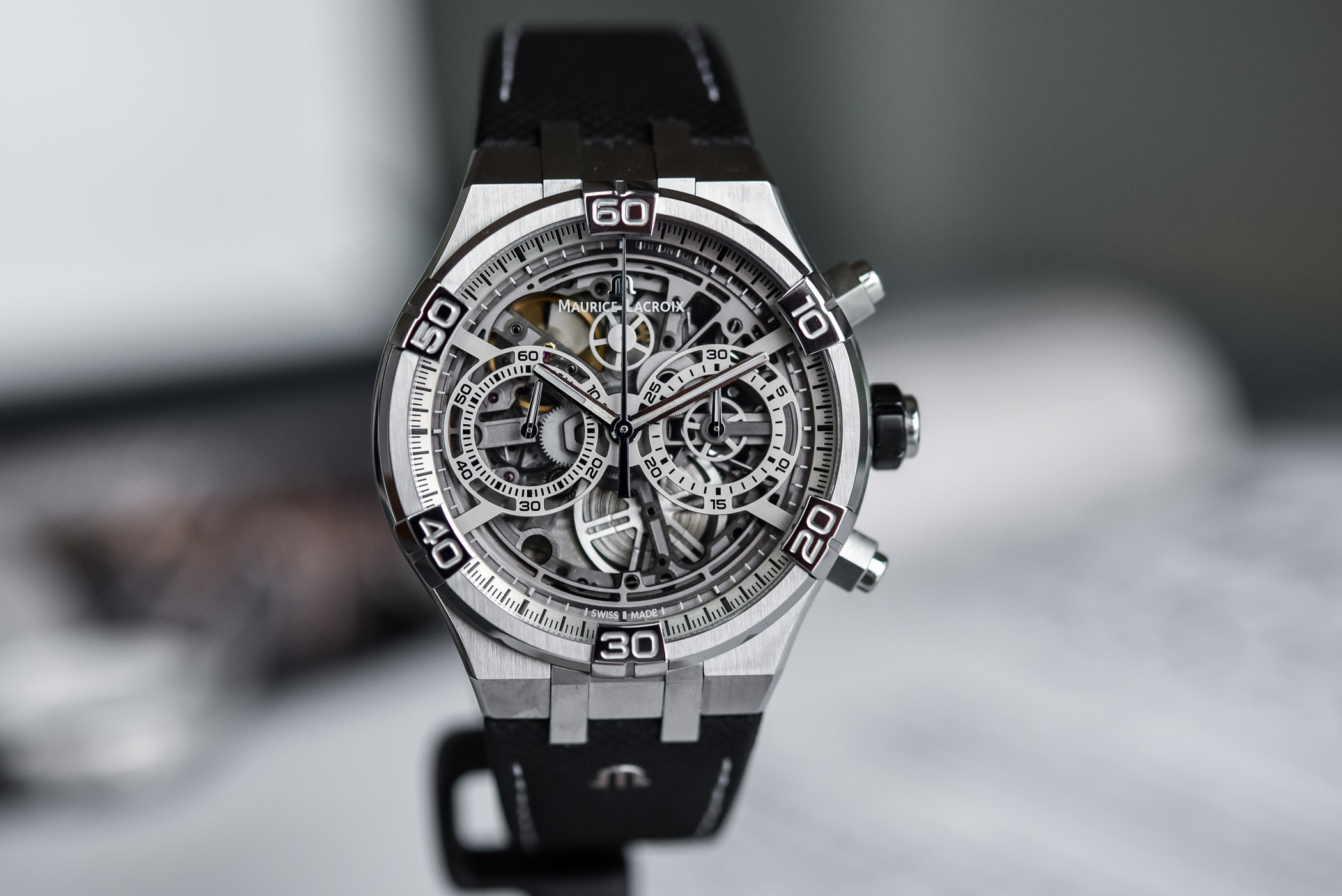 In the first place, the brushed bezel is thinner and the six hallmark claws/arms featured on the regular version of the Aikon have been adapted to display 10-minute intervals. Because the bezel is thinner, the six claws protrude over the crystal covering the dial. You can see though how the original groove in the claws is featured on the side of the bezel but flattened on the top to accommodate the numbers, which are engraved on a polished surface. Obviously a chronograph needs pushers and the Aikon has opted for screwed, brushed and polished pushers that guarantee water-resistance. The crown has also been revisited for extra grip and features deep grooves in the black PVD base.

The two sub-dials are arranged horizontally and have been cut by laser to eliminate as much material as possible with small seconds at 9 o’clock and the 30-minute chronograph counter at 3 o’clock. The sub-dials are a grey colour with black markings and held in place by four arms of the same colour. Playing with a palette of light and dark greys, the movement is treated with DLC black gold. 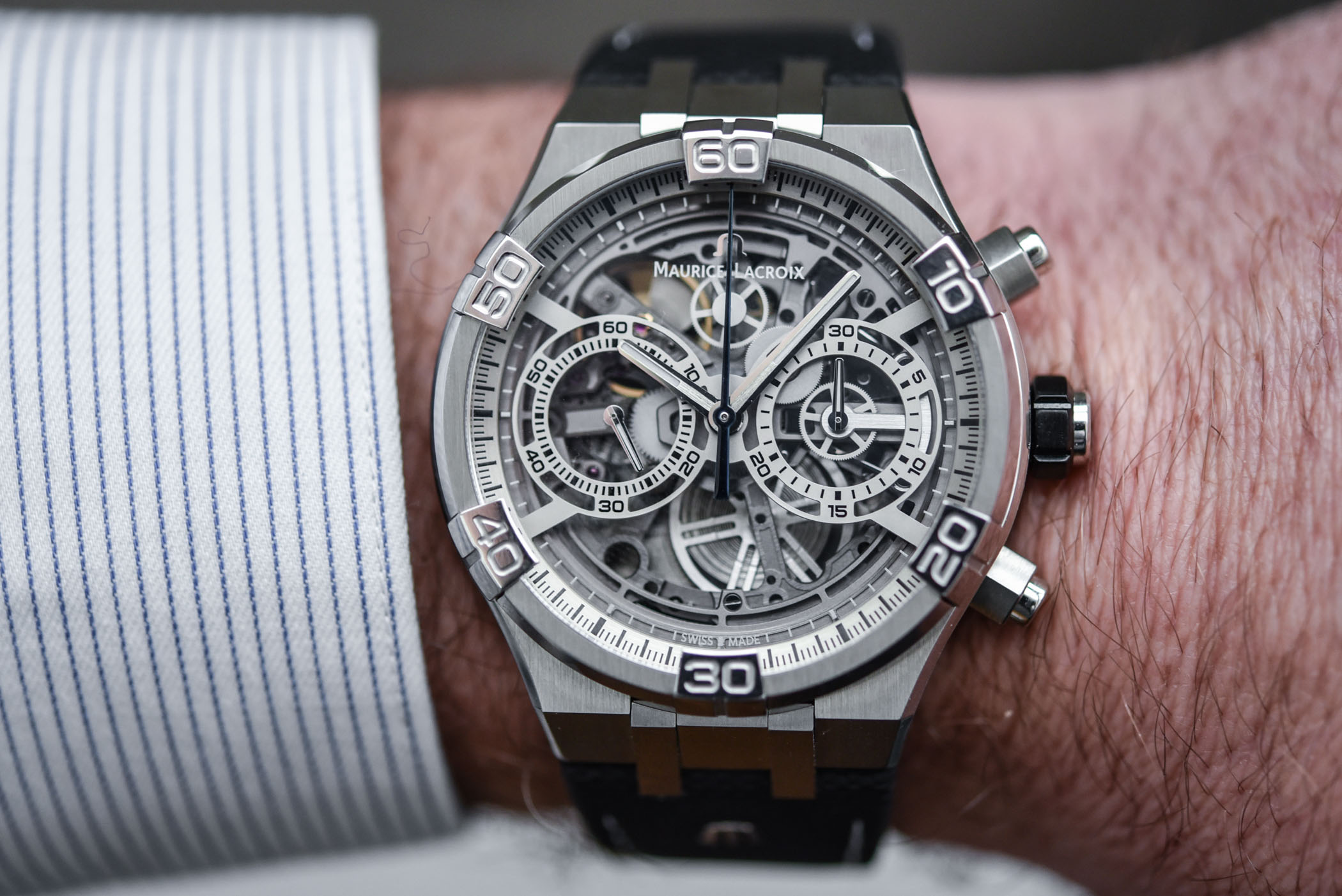 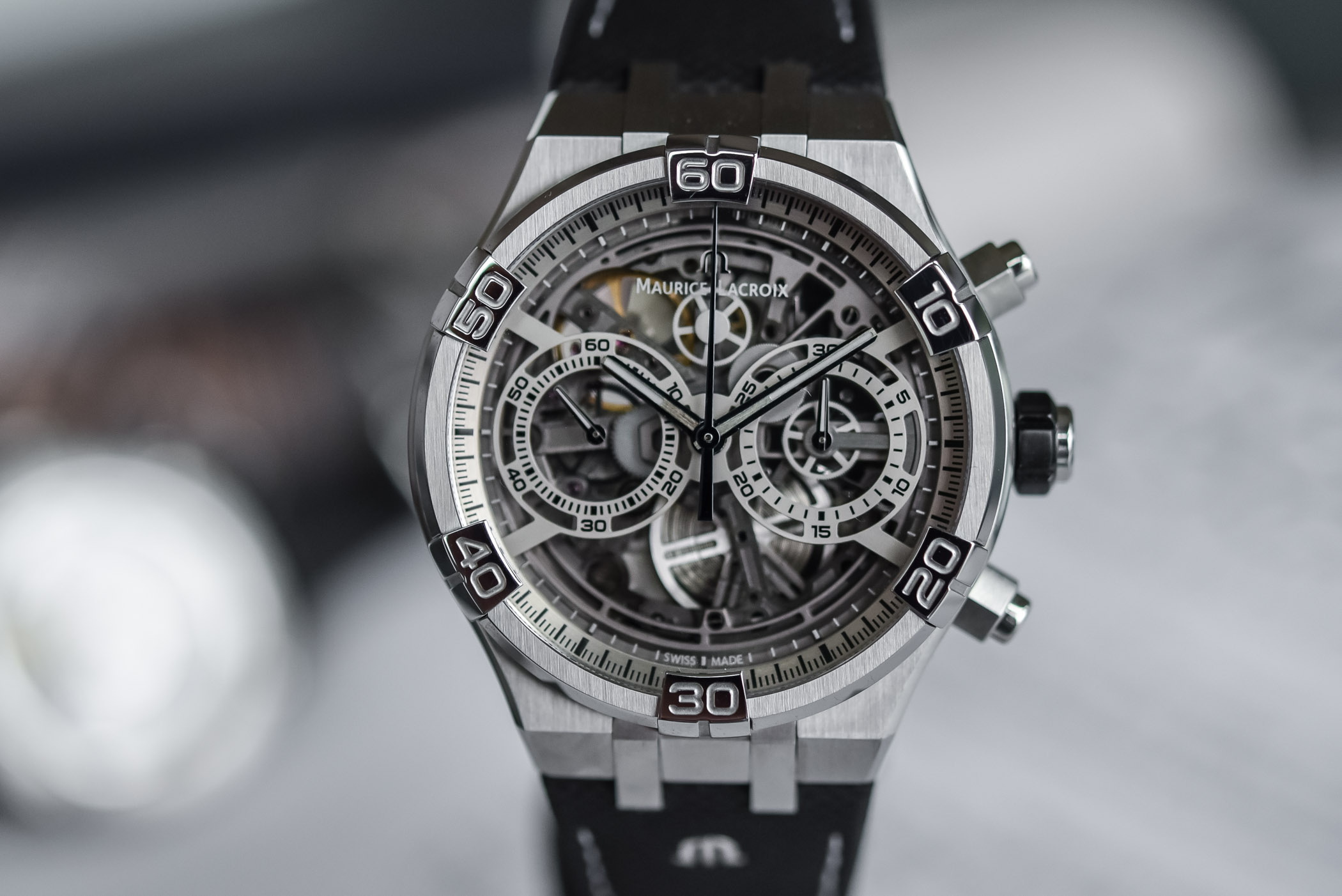 Unlike the Masterpiece Chronograph Skeleton, the sub-dials of the Aikon Chronograph Skeleton are indicated with small luminescent hands and not stylised wheels that block the view on the movement. The rhodium-plated hours and minutes hands are short and treated with lume while the central chronograph hand is blue. Apart from the double minutes/seconds track on the periphery – one in black on the flange, and a smaller white track transferred to the crystal – the rest of the dial reveals the mechanics powering the chronograph. The barrel and the balance wheel are perfectly visible along with the interplay of gears and the dark bridges.

The reverse side of the Maurice Lacroix Aikon Chronograph Skeleton reveals more details of the automatic chronograph calibre ML206 based on the trustworthy cam-and-lever Valjoux 7753. The Valjoux-powered Maurice Lacroix chronograph movement might not be as interesting as a column-wheel chronograph, but is a precise and reliable ally allowing ML to keep its prices in check. Beating at 28,800vph, the movement has a power reserve of 48 hours. The back of the movement features standard finishes with vertical Geneva stripes on the bridges and the openworked rotor. 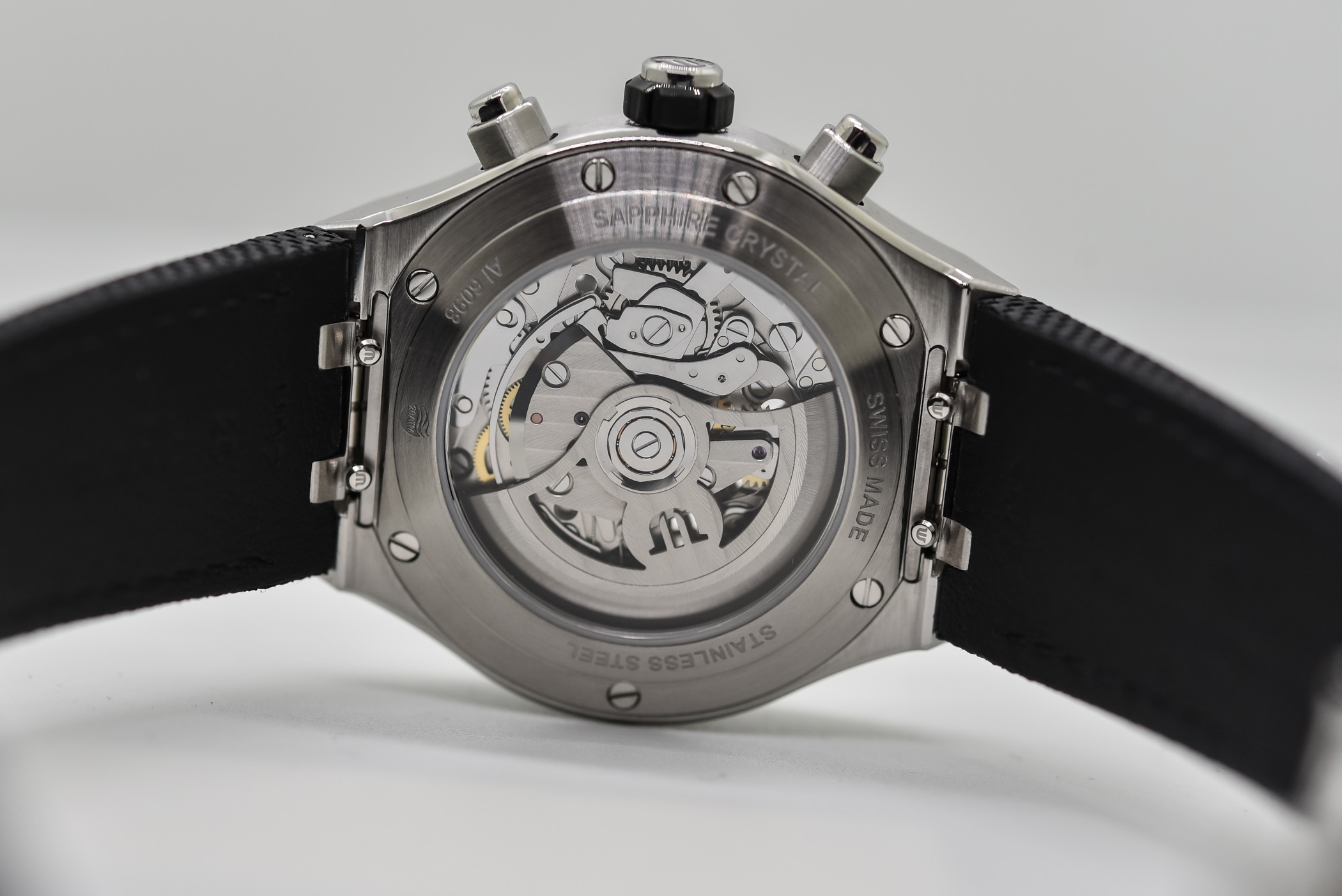 The transition of this skeletonised chronograph from the fancier, less technical Masterpiece case to the more rugged Aikon has meant numerous adaptations. If you compare this model to the existing Aikon Skeleton 45mm or even a closed dial Aikon Chronograph, you can see how this model has had to sacrifice some of the most recognisable traits of the Aikon (thick bezel with claws) family.

However, the sacrifice is not in vain because if you are going to have a skeletonised chronograph, the idea is to offer the most viewing room possible. And the view is quite impressive drawing the eye towards the centre of the dial and down towards the mechanical show. 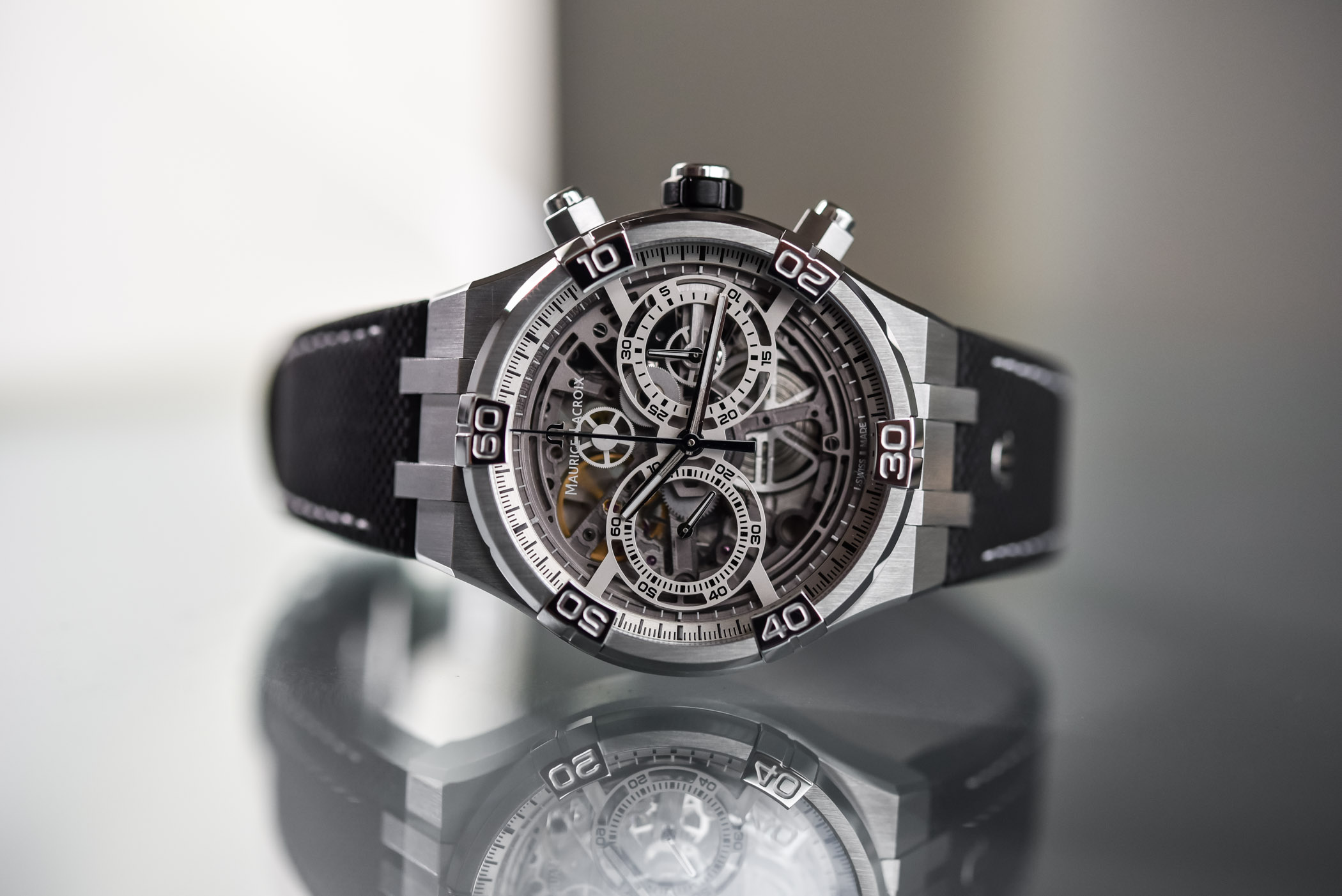