In addition to breaking records as a pilot, Antoine de Saint Exupéry made aviation history as a passenger too. Travelling onboard the Latécoère 521 “Lieutenant de Vaisseau Paris” in July 1939, the aviator and writer took part in the flying boat’s first non-stop crossing of the North Atlantic in just 28 hours and 27 minutes – pilot Henri Guillaumet flew 5,875 km (3,651 mi) from New York City to Biscarrosse (on the French coast) at an average speed of 206 km/h (127 mph), including 2,300 km (1,400 mi) with one engine out.

The IWC Timezoner Chronograph combines two of the most practical in-flight complications: flyback and dual time.

Celebrating the anniversary of Saint Exupéry’s participation in this epic flight, IWC Schaffhausen launches an 80-piece limited edition of one of its most complex yet most relevant watches in the Pilot’s collection, the Timezoner Chronograph. This watch, which appeared in 2016, had only existed with a black dial and had remained rather discreet until now. Celebrating a time-zone-crossing flight was the perfect occasion to bring back this watch to the forefront. 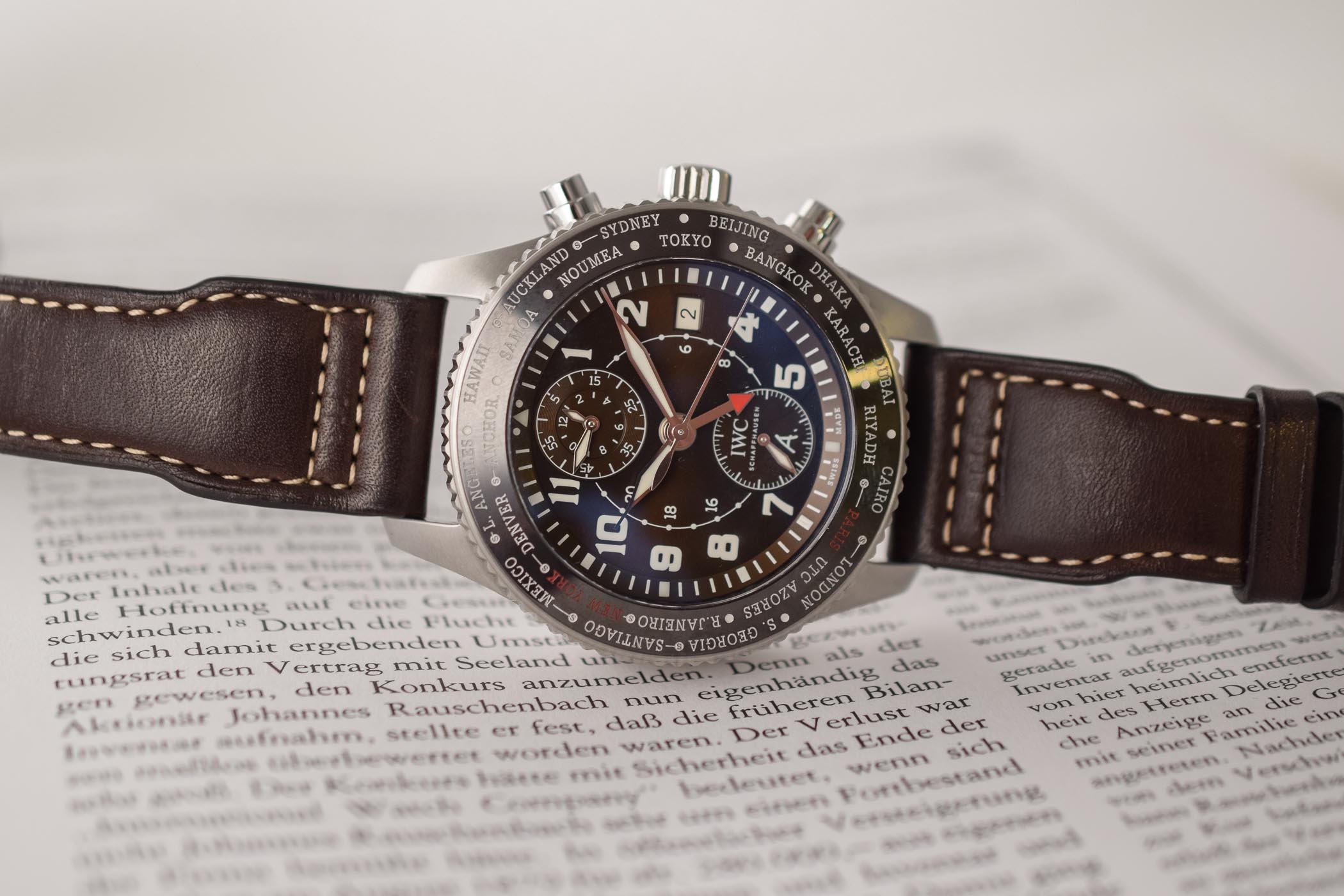 The IWC Pilot’s Watch Timezoner Chronograph is a bold, sizeable watch with true pilot’s credentials, but not like a Big Pilot’s Watch and its B-Uhr roots. It relies on a combination of two complications that are known to be very useful for aviators. First is a chronograph with a flyback “retour en vol” function, which allows to stop-reset the chronograph by just pressing the pusher at 4 o’clock, and is used for various in-flight calculations. 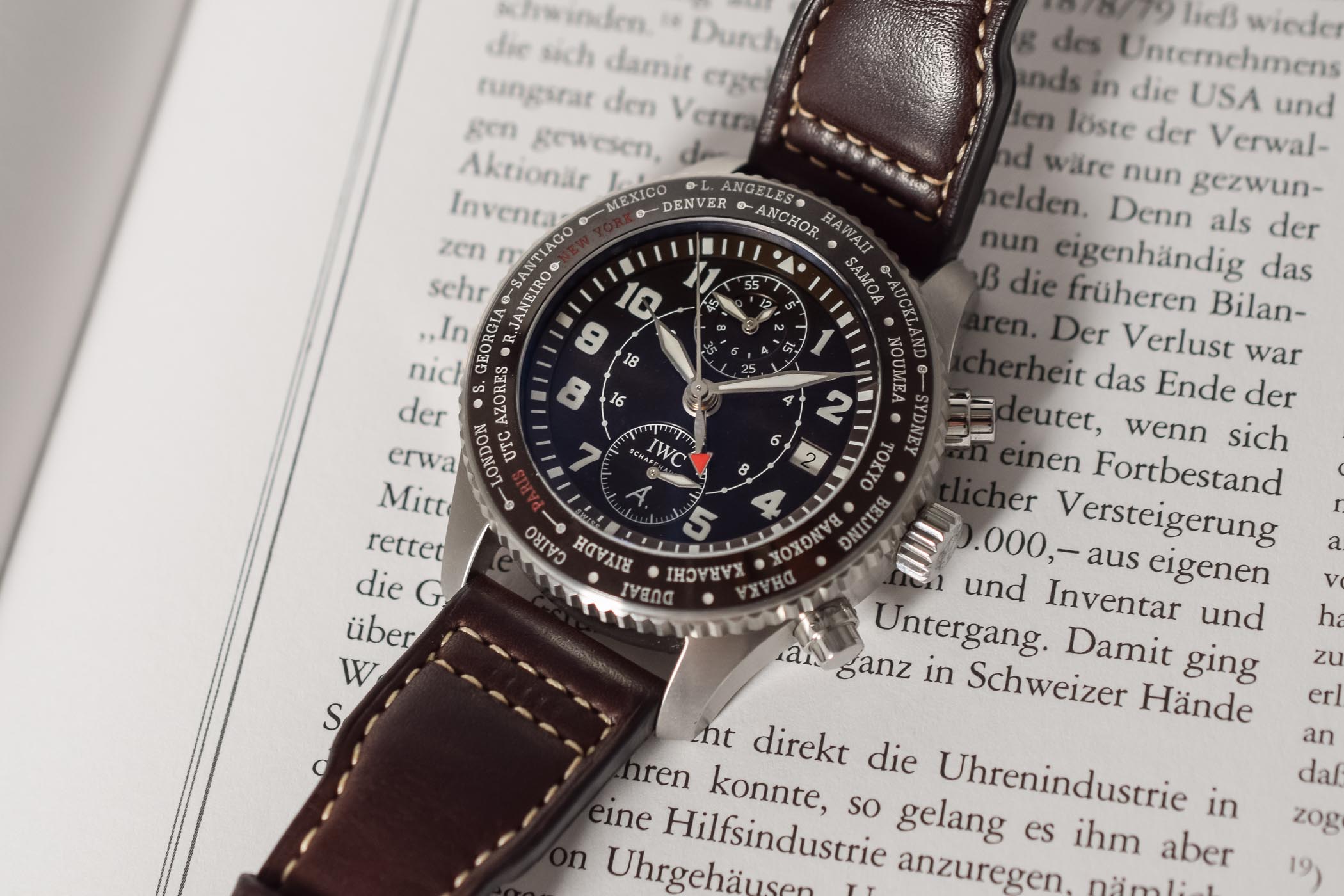 The second function, a dual-time indication with a central 24-hour hand seems rather classical in its display, however, is clever and unusual in the way it is actuated. Indeed, the second time zone is extremely simple to use, as it allows the wearer to adjust the additional 24-hour hand by simply pressing down and rotating the bezel. The latter features a ceramic insert that is engraved with the major cities around the world.

For the occasion of this limited edition, IWC brings the classic “Saint Exupéry” theme to this watch. This means a dark brown dial, specific Arabic numerals – vintage and stylized, on the contrary to the standard version with modern numerals – and specifically designed rhodium-plated hours and minutes hands. The ceramic bezel insert, also treated in brown, highlights “Paris” and “New York” in red. The watch is worn on a brown calfskin strap with a steel folding clasp. Finally, the caseback has a special engraving with the Latécoère 521. 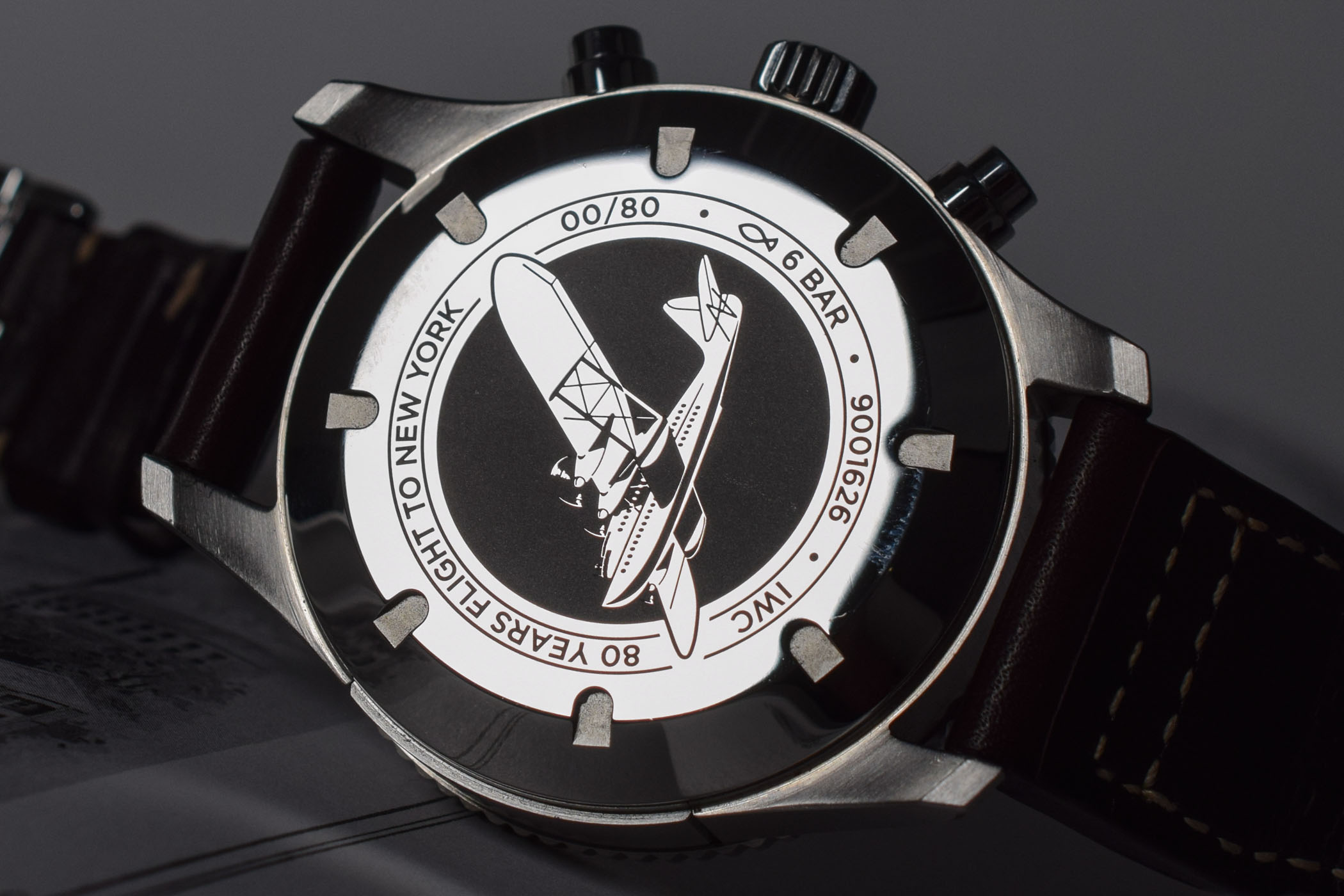 As for the display, and even though this Timezoner Chronograph IW395003 bears multiple functions, things remain clear thanks to the signature chronograph sub-counter at 12 o’clock, with hours and minutes indications reunited – which also means that it is read as a normal watch. A date at 3 o’clock completes the package. The watch is made of stainless steel, brushed and polished, and measures 46mm in diameter and 16.1mm in height – no need to say, it is rather impressive on the wrist but the curved lugs allow for a good balance. 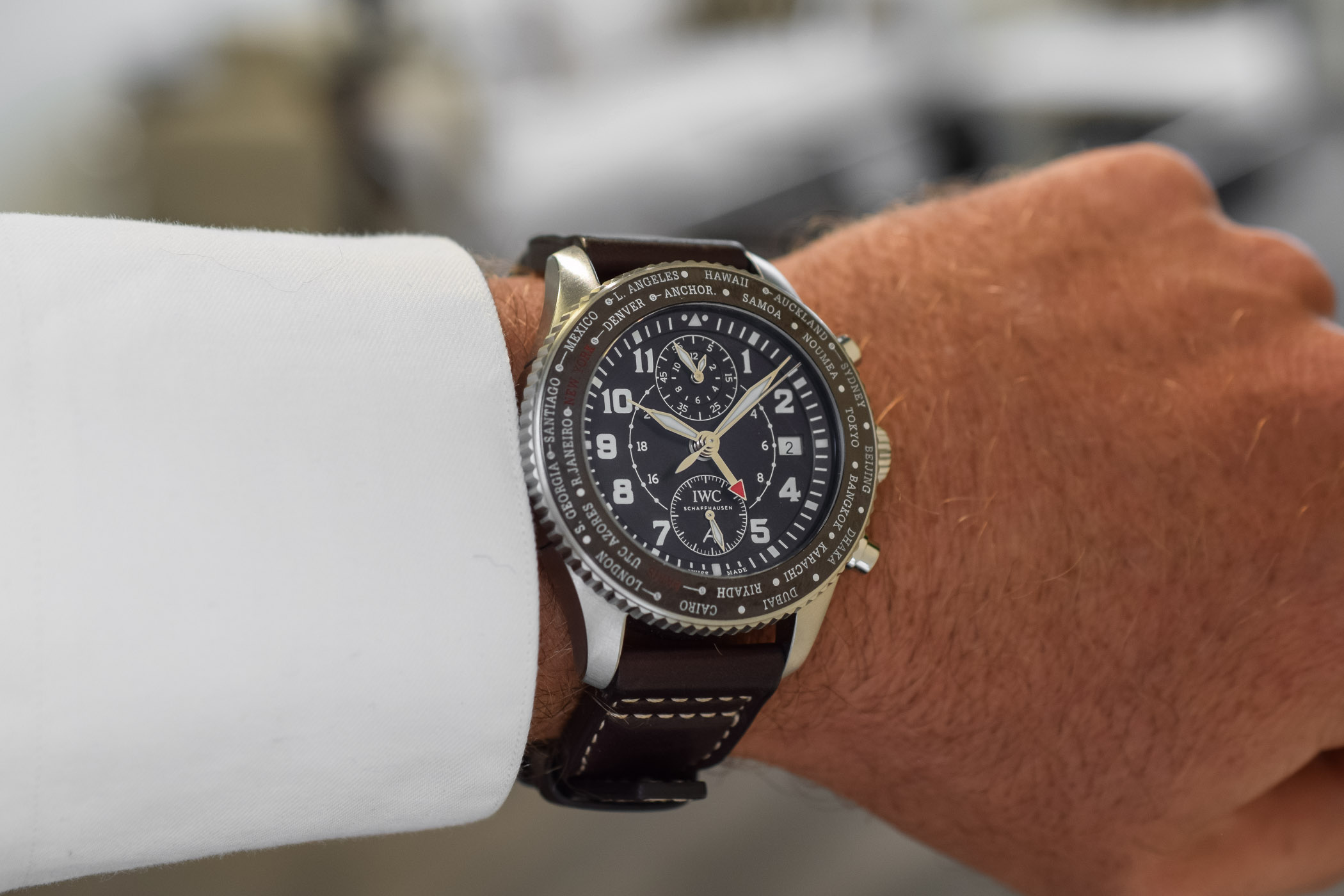 Powering the IWC Pilot’s Watch Timezoner Chronograph IW395003 is the in-house Calibre 89760, an automatic, integrated chronograph with column wheel and vertical clutch. This modern movement boasts a comfortable 68-hour power reserve and beats at 28,800 vibrations per hour. The flyback function is a nice addition and the pushers have a nice, firm feeling.

The IWC Pilot’s Watch Timezoner Chronograph “80 Years Flight To New York” IW395003 will be limited to 80 pieces worldwide. It is available now in IWC Boutiques and from authorised retailers. Its price is USD 13,100. 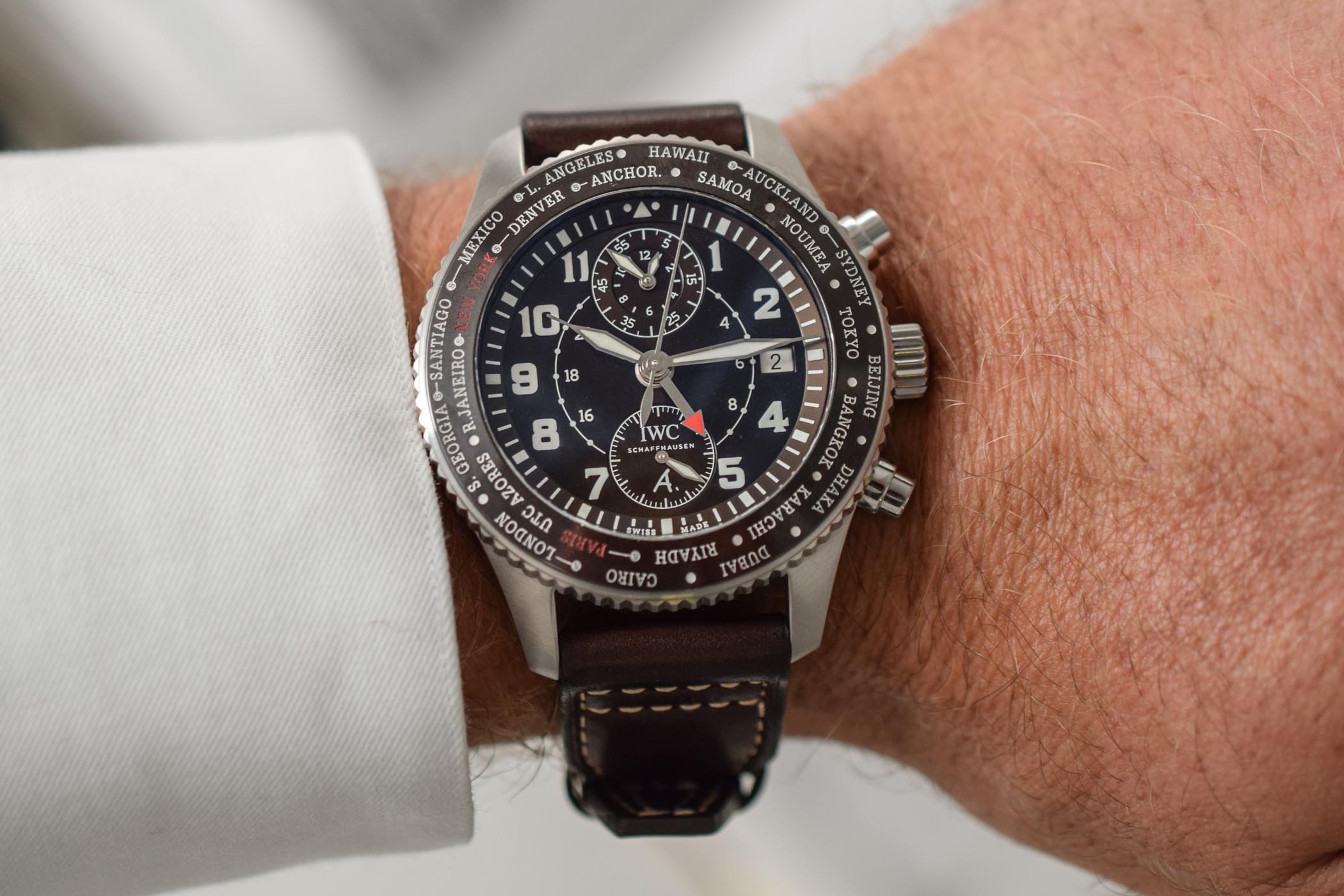