Longines and its Heritage collection… A range that comprises some of the most desirable watches produced by the brand, all inspired by some of Longines’ most glorious past watches, re-edited in a modern way but always with great historical relevance. One of the flagship models in this collection is the Avigation BigEye, a watch modelled after an elusive 1930s watch with quite a resemblance with some glorious post-WWII pilot’s chronographs. Also known as “Big Eye chronographs,” this specific type of watch was first re-issued in 2017 with the steel Avigation BigEye. And this year, the brand adds a new version, with an attractive petrol blue gradient dial, and a titanium case.

Inspired by the past

As explained in our review of the steel model, the story behind the Longines Avigation BigEye Chronograph is anything but clear. The design is based on a 1930s pilot’s chronograph that a collector presented to the Longines museum, but the company didn’t have a record of the piece in its archives. Is it a prototype? What’s the exact year? Nothing is truly clear but what makes no doubt is the beauty of the piece in question, hence why Longines was audacious enough to make a re-edition of this model. 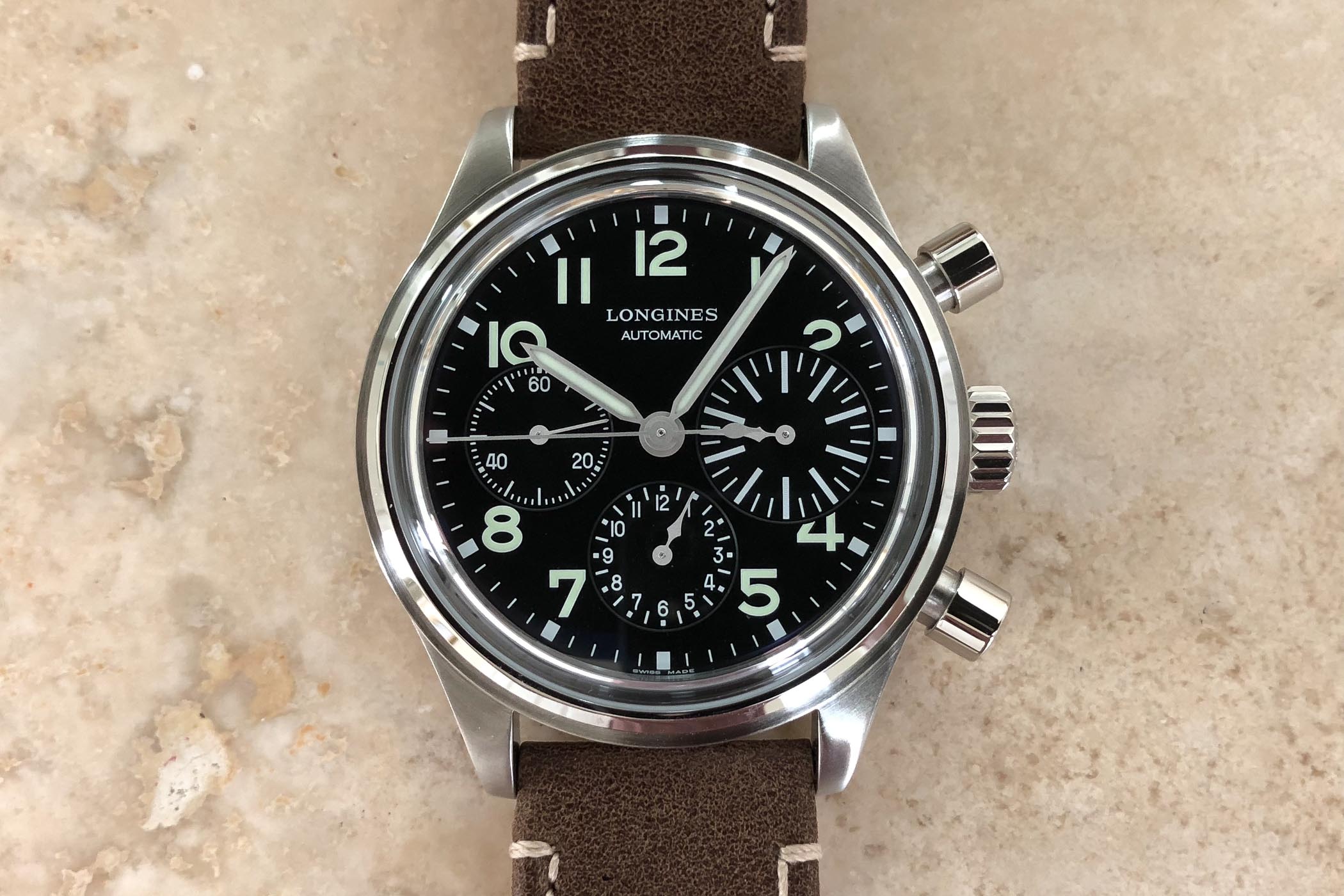 Fast forward to baselworld 2017, when Longines presented its Heritage-based Avigation BigEye. Typically, a robust, military-inspired pilot’s chronograph with tri-counter layout, classic luminous Arabic numerals and, the star of the show, an oversized minute counter providing instant legibility on the indication. While this steel/black edition is still an important member of the permanent collection, it is now joined by a sportier, bolder edition.

Following the presentation of this watch with the official photos, I wanted to have a look at it, in the metal. I personally have a big thing for pilot’s chronographs, and especially those from the Type XX series. So, even though the Avigation BigEye isn’t part of the watches made for the French Air Forces, it still has a lot in common with this series and has always been one of my favourite models in Longines’ collection. But how does the titanium version, with its bold and more colourful dial, lives up to the model’s pedigree. 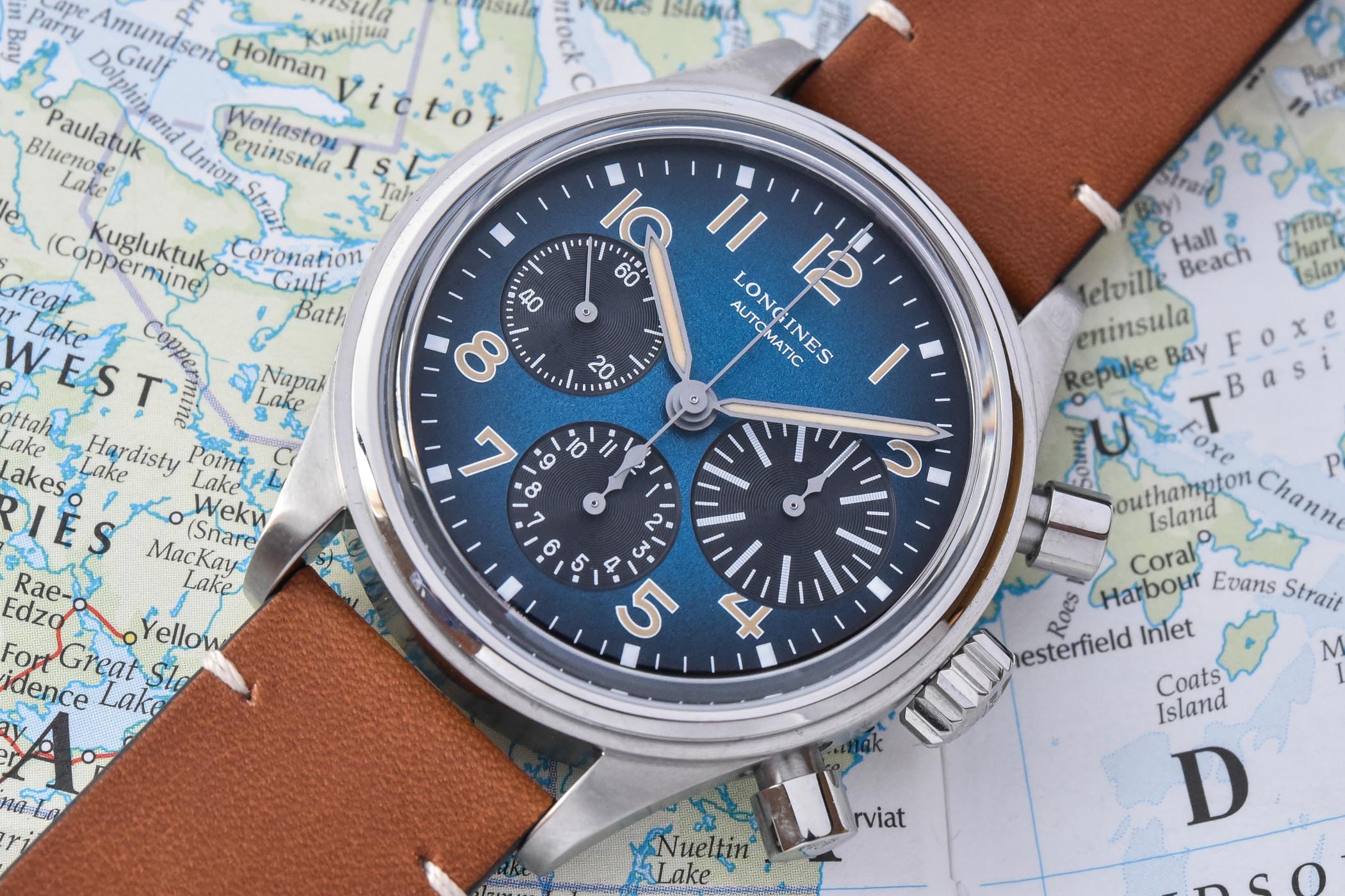 Well, in all fairness, if you’re looking for historical relevance and faithfulness, this new version won’t be for you. Good point, the steel model is still part of the collection and will certainly fulfil your needs. Now, the titanium edition of the Longines Avigation BigEye is not meant to be a proper re-edition, but more a modern take on the concept, something fresh, more modern with a true personality. Indeed, it’s a watch with character and presence, and once you remove the vintage watch from your mind, it actually is a looker… 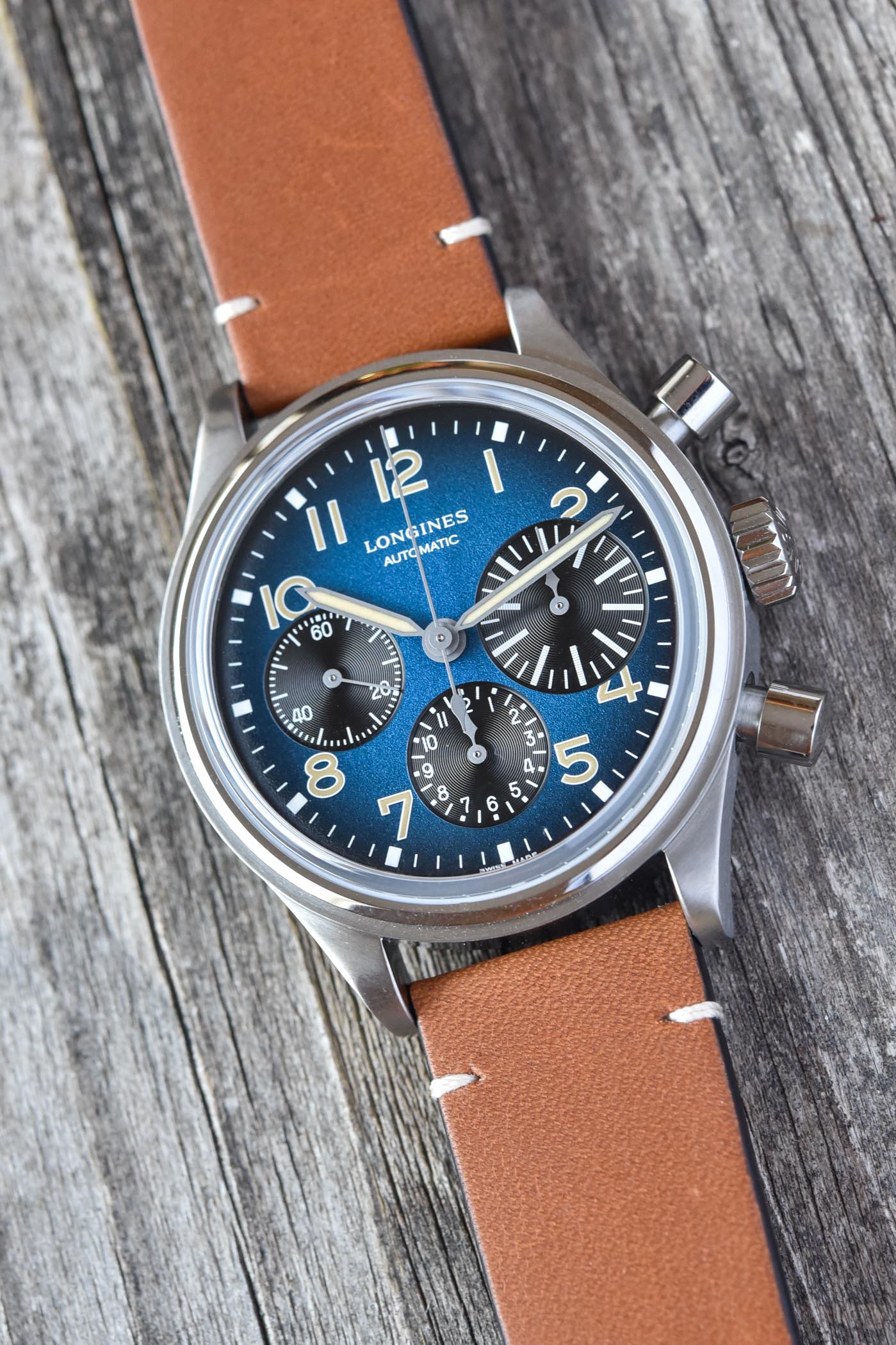 Apart from the change in materials and colours, the Longines Avigation BigEye Titanium retains the proportions and specifications of the original steel edition. This means a 41mm case with a typical 1930s/1940s shape, meaning the style of a Calatrava watch transferred to a more robust chronograph watch. This is particularly visible with the combination of a stepped bezel with a coin-edge profile and the lugs integrated into the middle case. I found this design very appealing and its utilitarian look greatly matches the overall pilot’s concept. The watch is certainly quite large and not particularly thin either, but it wears comfortably. 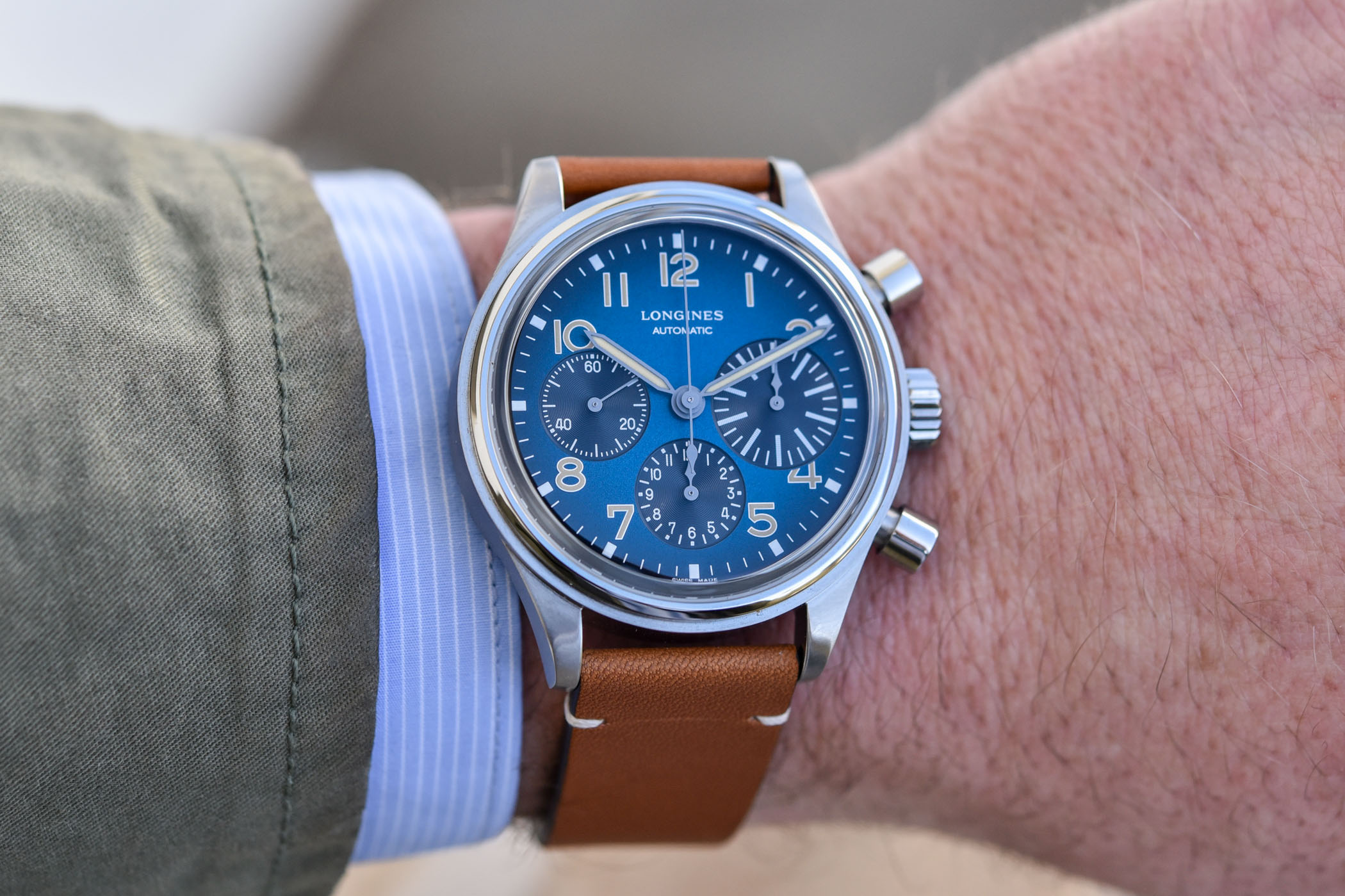 Two advantages of having a titanium case – in the present case, we’re talking about grade 5 titanium, which can be polished. The obvious benefit is the weight of the watch, which is fairly lighter than the stainless steel version, thus enhancing the comfort on the wrist. The second characteristic of titanium is its colour, different from stainless steel – colder and with a different shine. It participates in giving this model its own personality.

The second evolution is, of course, the dial. And it is quite different from the classic black dial found on the stainless steel version. The latter was matte, non-textured and its indications were not playing much on the fauxtina trend. The dial of the titanium version is playing on mixed inspirations, with a bold colour that contrasts with the strong vintage tone of the markers. And if on paper it sounds pretty odd, the result is actually stunning. 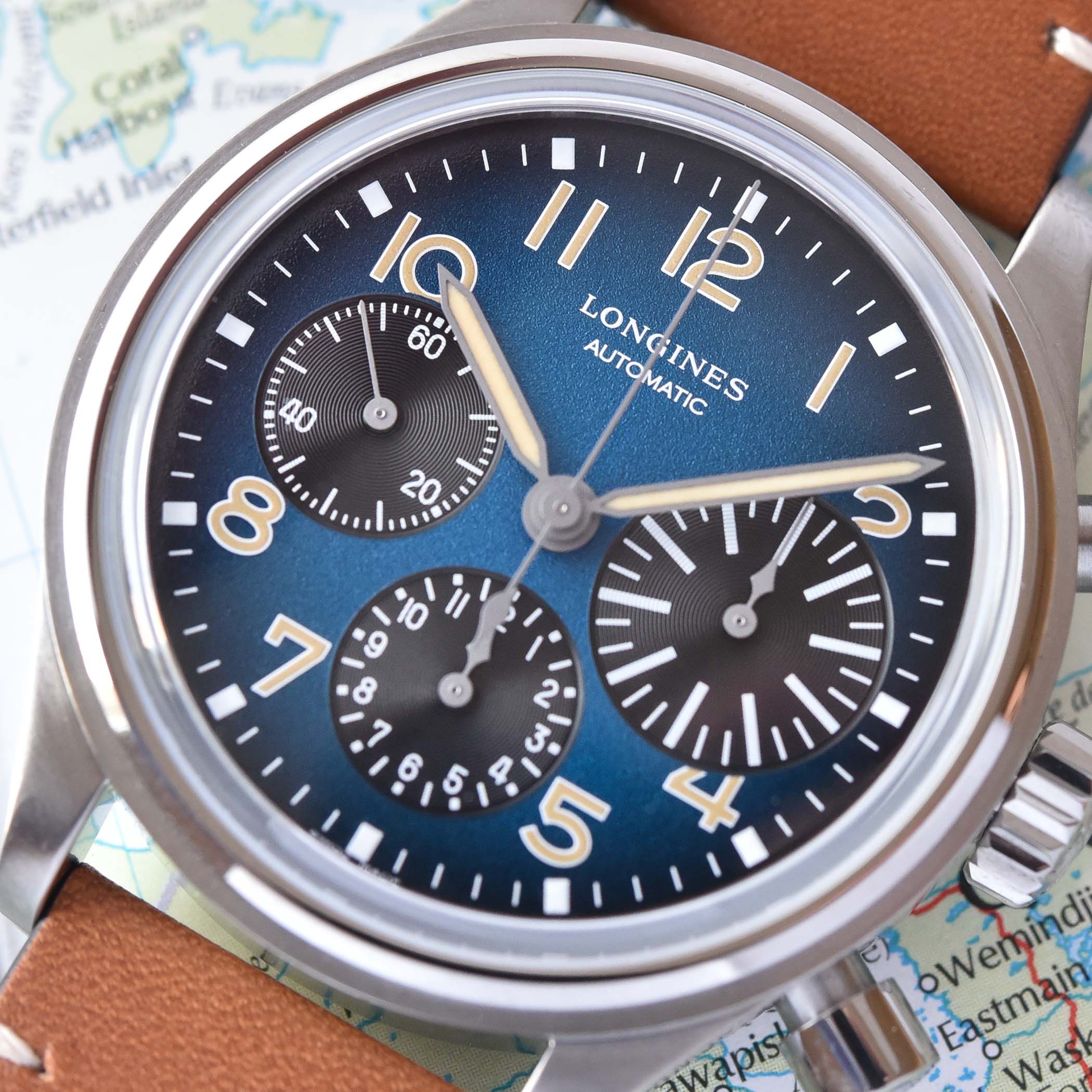 The base of the dial here shows a pronounced grained texture and is coloured in petrol blue. But to give even more presence and appeal, the dial has received a so-called gradient finishing, with darker edges. The sub-dials have also been left in black, with a pronounced concentric pattern. Contrasting with this bold and modern treatment, the Arabic numerals and hands are treated in “old-radium” colour for the vintage touch. However, the non-luminescent markers and tracks are all left in white. For the rest, no evolutions are to be noted. We find back the cool oversized “Big Eye” 30-minute counter, the smaller running seconds and 12-hour counter, and the welcome absence of a date window.

Under the screwed caseback is a well-known movement, the Calibre L688. Also named ETA A08.L01, it is a heavily modified Valjoux architecture that now features a column wheel for smoother and more accurate operation of the pushers. This rather noble movement is also providing multiple upgrades and modern features, such as a longer power reserve of 54 hours. Its escapement, classically beating at 4Hz, is also equipped with a silicon balance-spring for enhanced resistance to magnetic fields. 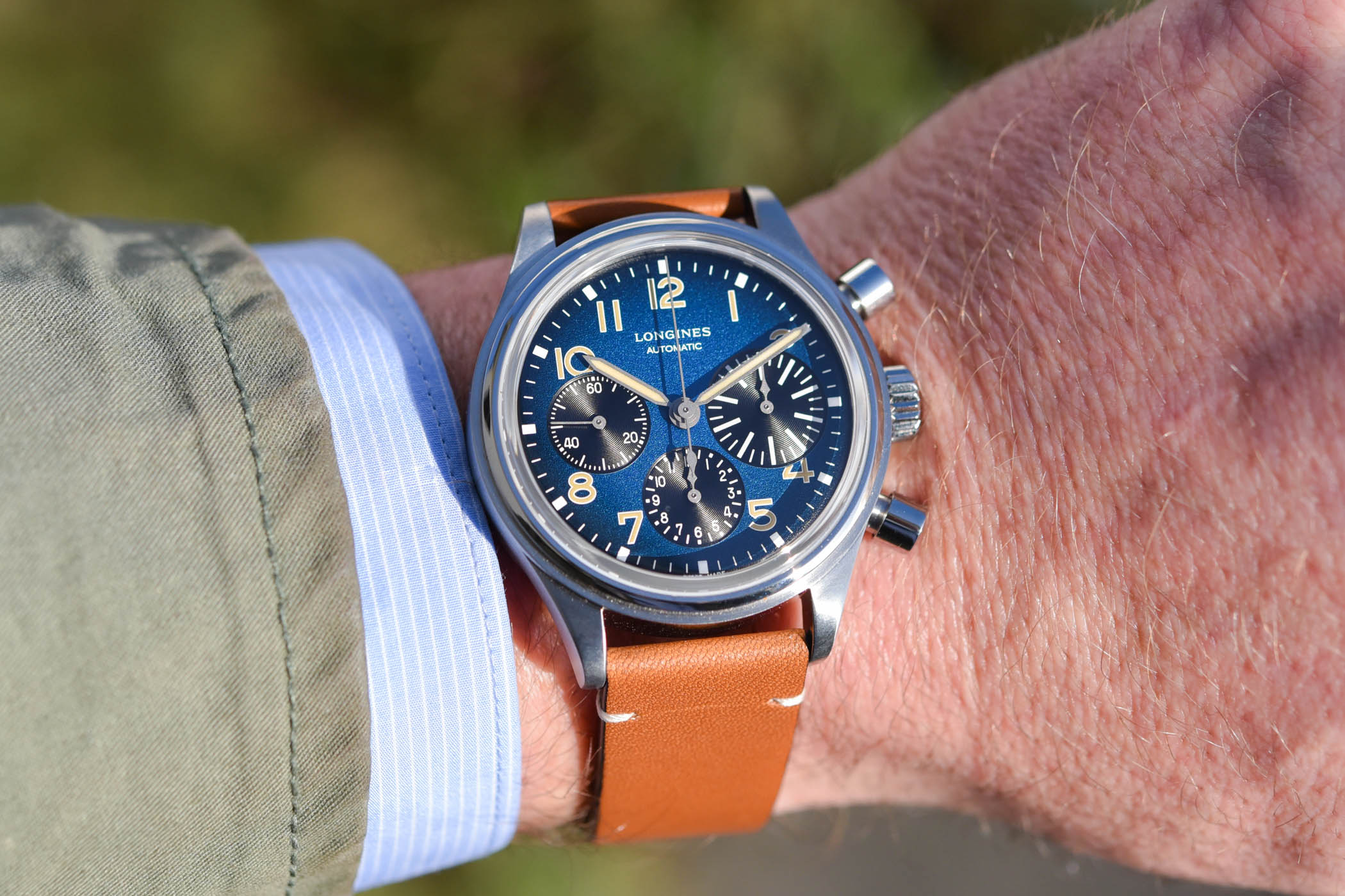 The Longines Avigation BigEye Titanium is worn on a natural brown smooth leather strap with a titanium pin buckle, complementing the vintage look of the watch. And I could easily see this watch worn a bead-of-rice bracelet with straight end-links, for a truly vintage look.

The Longines Avigation BigEye Titanium and Blue Dial (ref. L2.816.1.93.2) is now available as part of the permanent collection from Longines’ online boutique as well as from authorized retailers. It is priced at EUR 3,230 or CHF 3,200.