In less than twenty years, Horage has developed three in-house movements including a tourbillon and micro-rotor, and its inaugural K1 automatic is even the base of Bremont’s new ENG300 automatic calibre (Bremont purchased access to K1’s IP). This small independent brand has done a lot in a short period of time. We reviewed Horage’s first tourbillon last year, simply named Tourbillon 1, and were impressed by its offbeat design, simple but excellent finishing and incredible value for an in-house flying tourbillon. The new Lensman 1 improves on the calibre and brings a camera theme to an all-titanium piece.

Photography and the Horage Lensman 1

In 1925, Oscar Barnack and Leica introduced the first commercial 35mm camera with its 1A model. It was lightweight and very compact, perfect for discreet street photography and very much a game changer at the time. The camera represented the pinnacle of mechanical precision with clear parallels to mechanical watches. There are several camera enthusiasts among the small team at Horage and Marketing Director Landon Stirling even has a professional photography background. They decided to pay homage to great innovators and photographers of the past and present with the new tourbillon.

Most professional and particularly street photographers prefer blacked-out cameras to remain discreet, and that’s clearly seen with Lensman 1. Both the dial and Super-LumiNova on the indices are black, while the titanium case has a darker hue than stainless steel. The movement is also finished in black, as are both strap options. Bucking the modern trend, a few camera brands produce fully mechanical film models and some shun electronics entirely (no light meter). It’s a testament to how timeless (and popular) mechanical perfection can be, and today’s thriving mechanical watch market certainly backs that up. 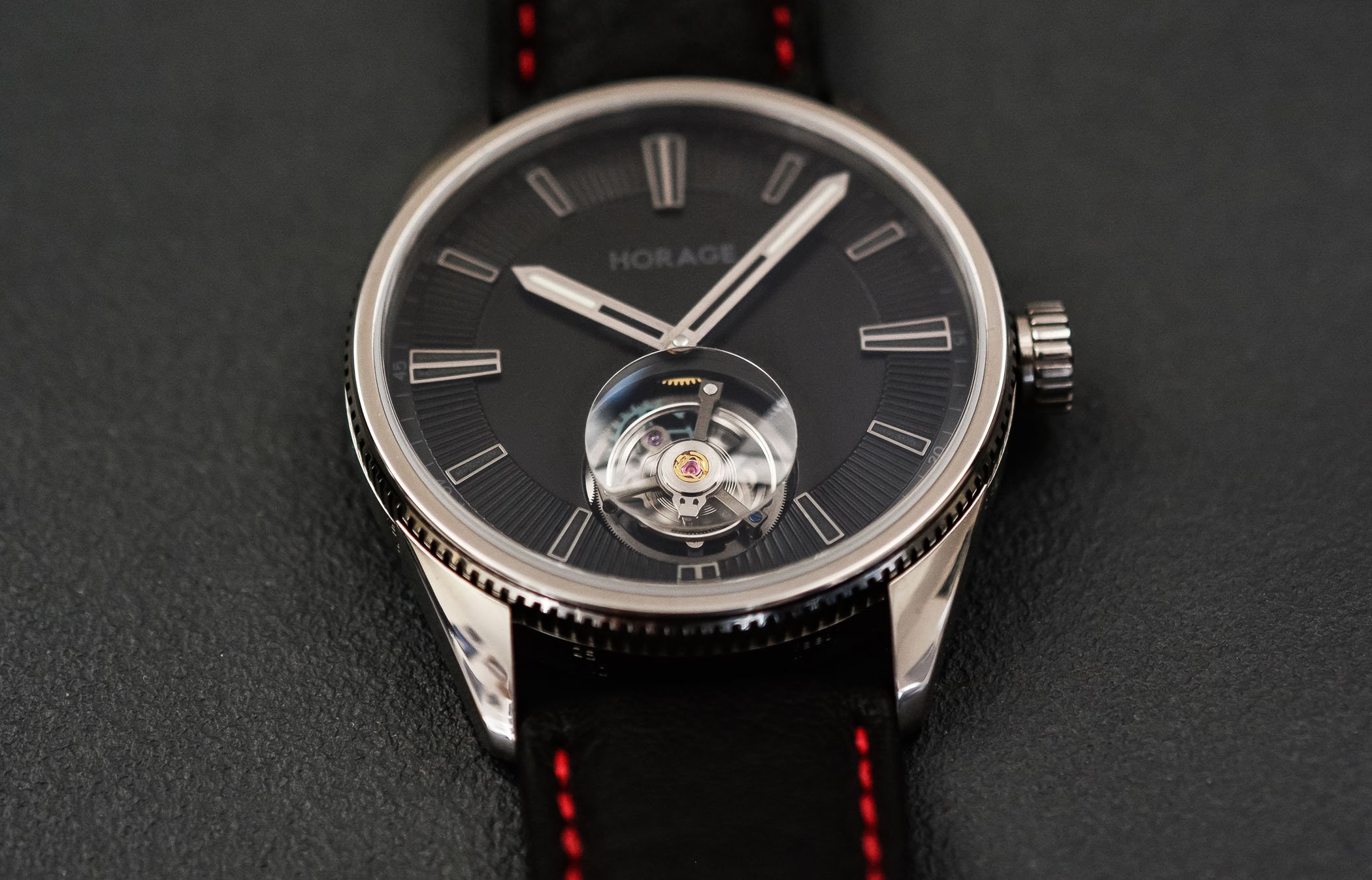 The case of the Horage Lensman 1 is Grade 5 titanium and the brand has used this in the past with the Autark models. It’s the same diameter as the Tourbillon 1 at 41mm, but significantly thinner at 10.3mm in height (compared to 11.8mm). Lug-to-lug is 49mm and it wears well on my relatively small wrist. The first camera reference you’ll notice is the fixed bezel that resembles a focusing ring with unique knurling on the side. The screw-down crown has a similar pattern and a black onyx stone inset, which I think looks like a shutter button. Water resistance is rated in 100 metres. The caseband features laser etched numbers that represent those on an aperture ring. They’re subtle, but provide a cool, camera-inspired detail. The AR crystal is domed to look like the outer glass of a lens, while a very unique, oversized cyclops lens sits over the flying tourbillon at 6 o’clock, magnifying the details. It’s the photography loupe of the watch.

Flip the Horage Lensman 1 over and the updated K-TOU tourbillon calibre is displayed through the sapphire exhibition window. It’s also blacked out with polished steel elements for contrast and the grid aesthetic is similar to the Tourbillon 1. The outer edge of the case back has an engraved, paraphrased quote by French photographer Henri Cartier-Bresson. There are two 22mm strap options and both perfectly match the overall design and theme – black calfskin leather with either black or a punchy red stitching. The leather is textured to replicate a camera’s grip and they come with quick-release levers.

Blacked-out dials often trade aesthetics for legibility, but not in this case. The black gold applied indices sit on an elevated, ridged outer ring and change depending on the light. They can appear dark in certain indoor lighting, but quickly take on a glimmering silver as light hits them. The indices are actually filled with black Super-LumiNova, so they have a strong, lasting glow at night. The hour and minute hands are partially open-worked with white Super-LumiNova, which contrasts well against the black background. The only dial text is Horage’s logo at 12 o’clock and BIEL BIENNE at the very bottom (where Swiss Made is usually printed). Horage is based in Biel/Bienne, which is also home to heavyweights like Rolex (the movement manufacture), Omega and the Swatch Group. 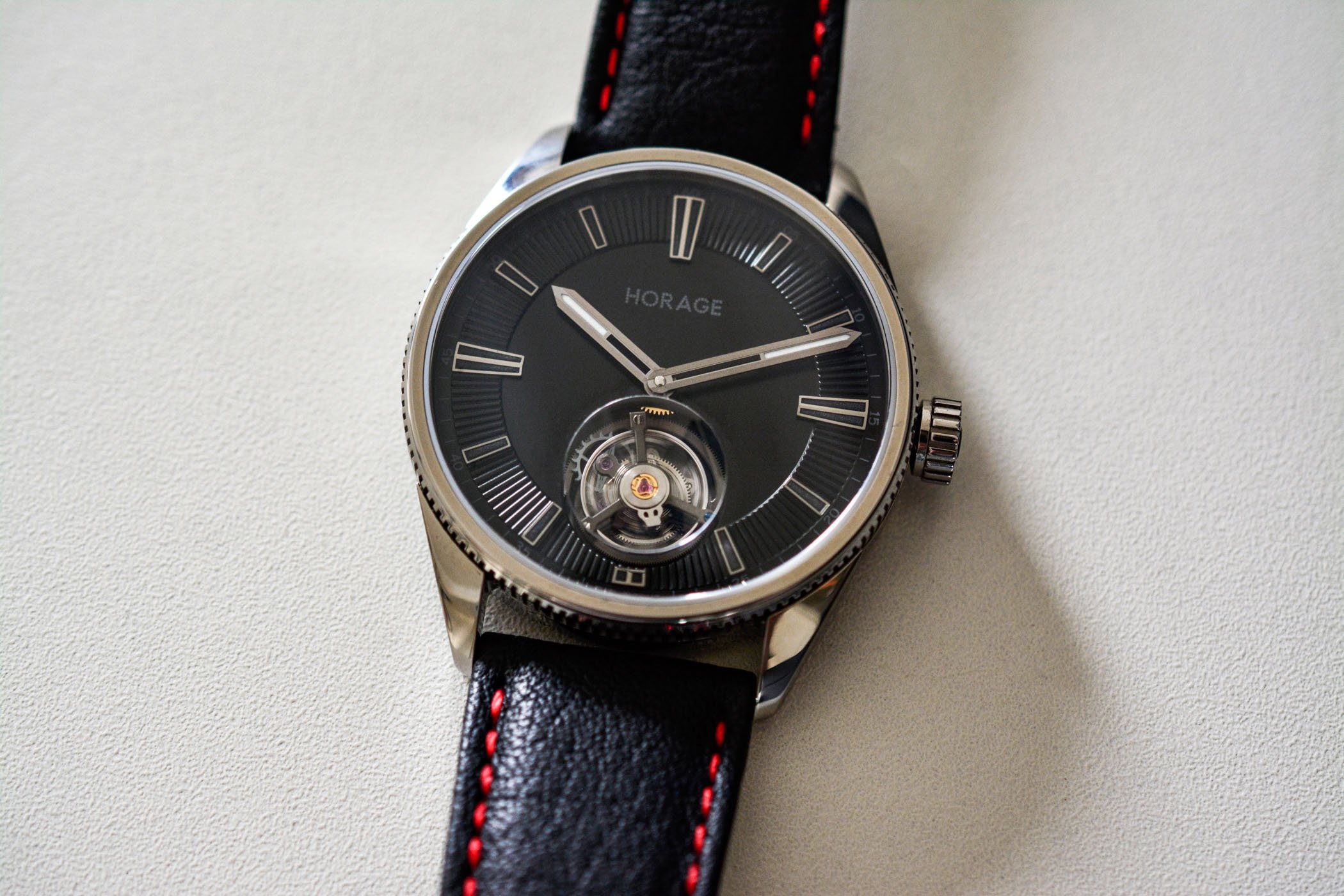 The star of the show is the large flying tourbillon at 6 o’clock, which is enhanced by the oversized cyclops lens. Details are magnified to really highlight one of the most fascinating and coveted of all complications. Like most tourbillons, the cage rotates every 60 seconds, so a blued screw on one of the three arms acts as a seconds hand. A subtle grey minute track spans the outermost perimeter and everything surrounding the tourbillon is detailed yet discreet, not unlike a professional street camera. 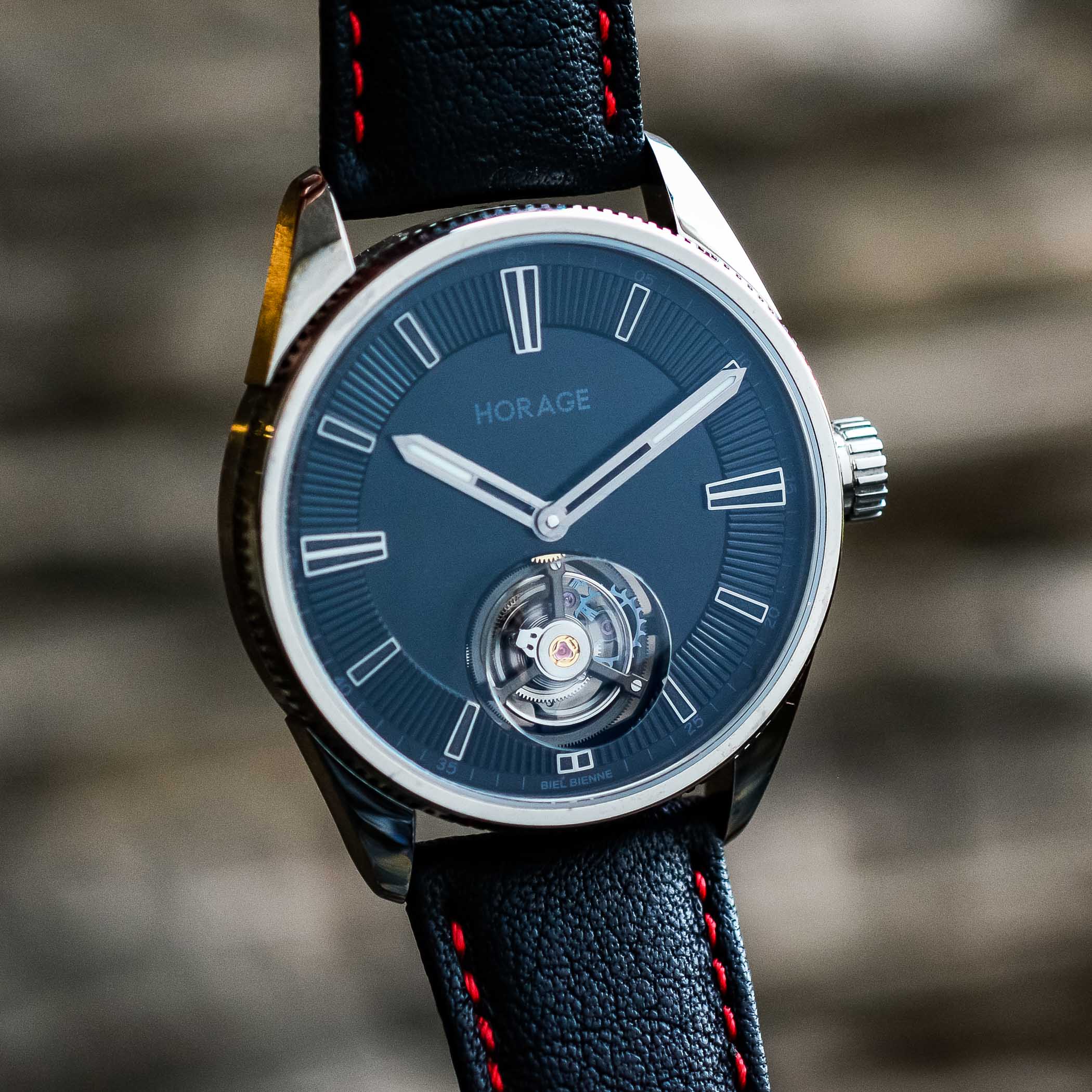 Powering the watch is an updated version of last year’s hand-wound, in-house K-TOU tourbillon. The main difference is the addition of a silicon hairspring, which joins the silicon escapement. This improves accuracy, stability and is completely antimagnetic, and few independent brands can do this. The aesthetics have also changed, trading the integrated grid pattern for a conventional dial at the front, while a modified, dare I say more sophisticated grid remains on the back. Overall specifications haven’t changed with 19 jewels, a beat rate of 25,200vph (3.5Hz) and 120 hours of power reserve (a full 5 days) via a single barrel. It has a chronometer level of accuracy at -4/+6 seconds per day and functions include central hours and minutes with the 60-second tourbillon at 6 o’clock. In Horage style, Swiss Made appears on the movement itself, not on the dial. 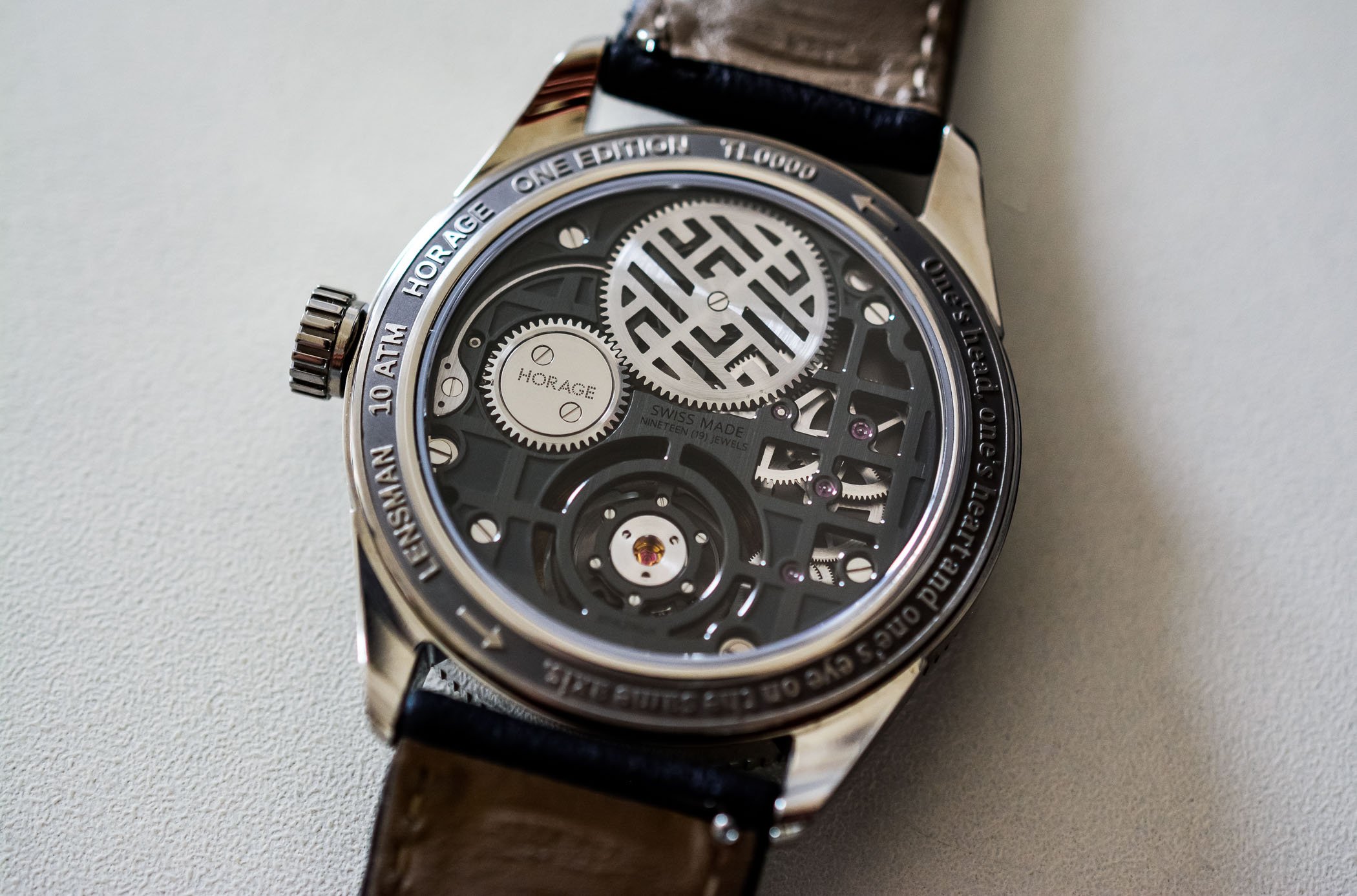 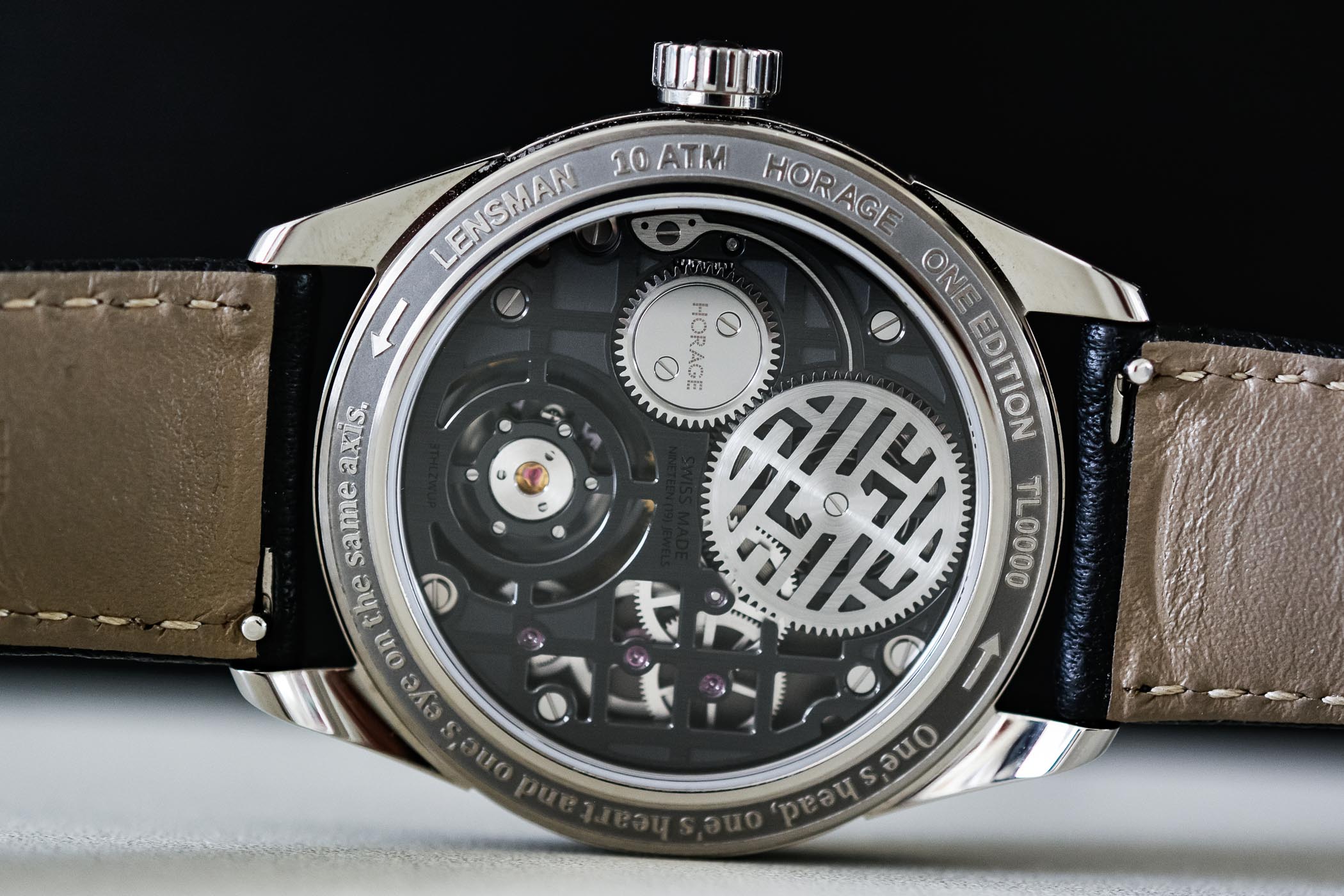 The tourbillon cage is titanium and only 0.29 grams, comprised of 34 parts and only 3.4mm in height. The silicon escapement and hairspring, along with the titanium build, contribute to the light weight. Those silicon parts are also the only movement components made outside of Switzerland as they come from Germany.

Last year’s Tourbillon 1 was an amazing achievement, developed at the 11th hour after a deal with a movement manufacturer fell through. It was ultimately for the best as Horage now has its own tourbillon movement and full control of future developments. The Tourbillon 1 was also the most accessible Swiss tourbillon on the market (by far) and the Horage Lensman 1 continues that trend. The price surprisingly hasn’t increased but seems a bit higher as duties, taxes and shipping are now included. Considering that comparable pieces sell for over CHF 20,000, this is an incredible value and brings another in-house tourbillon to a much wider group of enthusiasts. 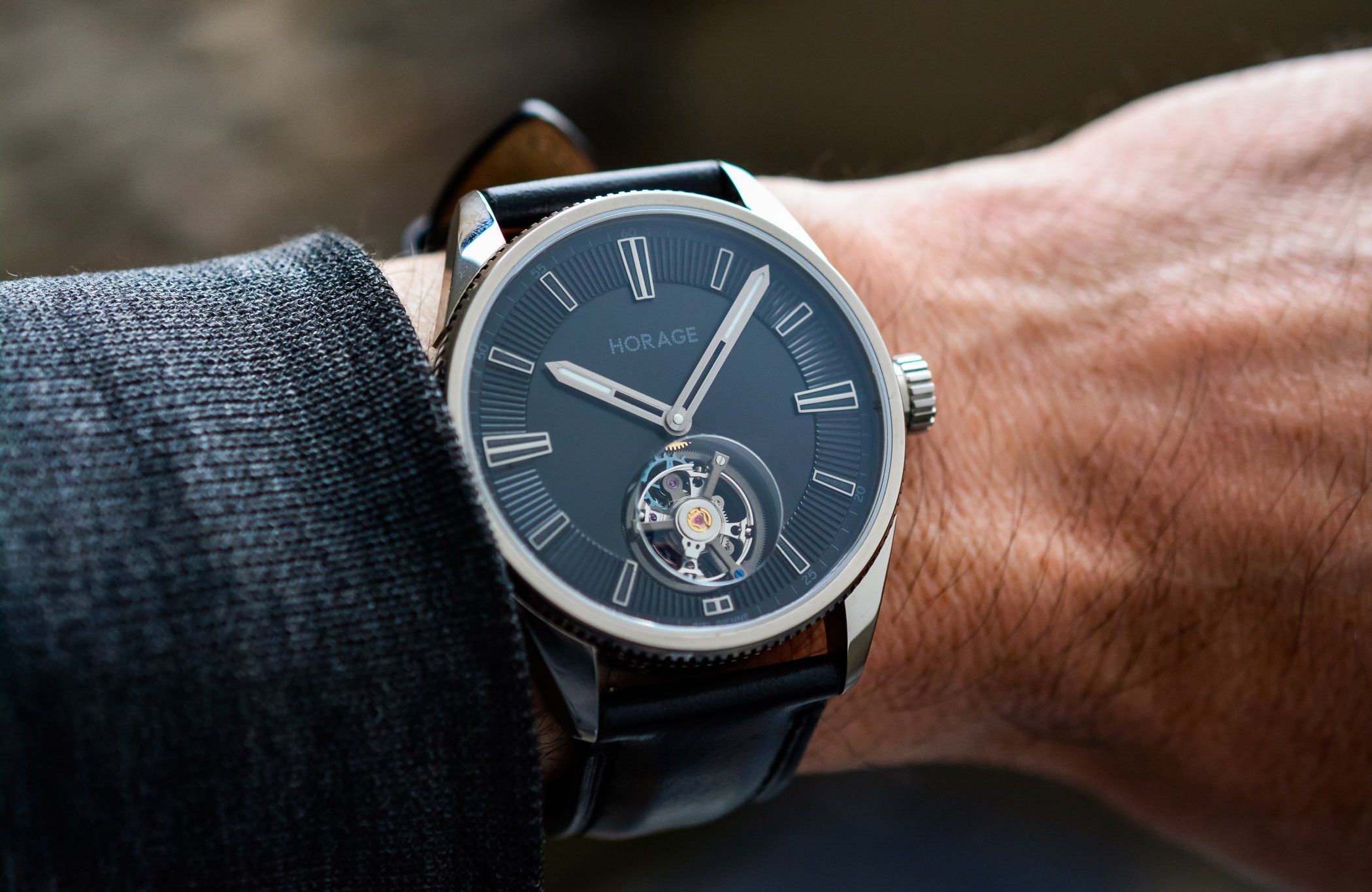 The references to photography are also cool, but subtle. They’re not in your face like other themed watches, keeping the piece classy and understated. The stealthy aesthetics can fly under the radar if you’re not looking for flash, but the magnified tourbillon is definitely a show-stopper for those that get close.

Orders will be taken for the Horage Lensman 1 through February 28, 2023, at CHF 8,890 (with tax, duty and shipping included). It’s limited to a maximum of 500 pieces, so orders will stop if the maximum is reached. Deliveries are expected to start in April 2023. For more information and to place an order, please visit www.horage.com.