StartBloggers CornerHands-on – The 2020 Edition of the Longines Avigation Watch Type A-7...

It is surprising how, in these times of peace in the Western World, pieces of military and pilot’s equipment have become so fashionable. Think bomber jackets or, for today’s matters, military-inspired watches. In this specific field of the military-issued watch, Longines can claim to have quite some background. Yet, we often refer to WWII-inspired models, or watches issued later. The era between the two wars remains a slightly overlooked theme for watch brands, unless your name is Longines and you have in your museum some absolutely stunning pieces to display, including the Longines Avigation Type A-7 1935 and its modern re-editions… which includes the all-new for 2020 model that we’ll be looking closely today.

Longines was founded in 1832 in Saint-Imier and is clearly one of the Swiss brands with the richest history. There are countless watches to be found in the brand’s museum with proper historical importance. The brand quickly specialized in manufacturing chronographs, such as the 1878 Calibre 20H, its first-ever stopwatch movement – which was a mono-pusher chronograph for that matter, since the two-pusher chronograph was only patented by Breitling in 1934. This is a feature that is also found on the Avigation watch, with a co-axial pusher integrated into the crown. While primarily designed for sports – Longines began timing horse races and other equestrian events in the late 19th century – and timing events (also used in production and medicine), the chronograph quickly found its way on the wrist of military forces, in particular pilots who rapidly found this complication useful for in-flight calculations (such as average speed, consumption, ascent speeds…) 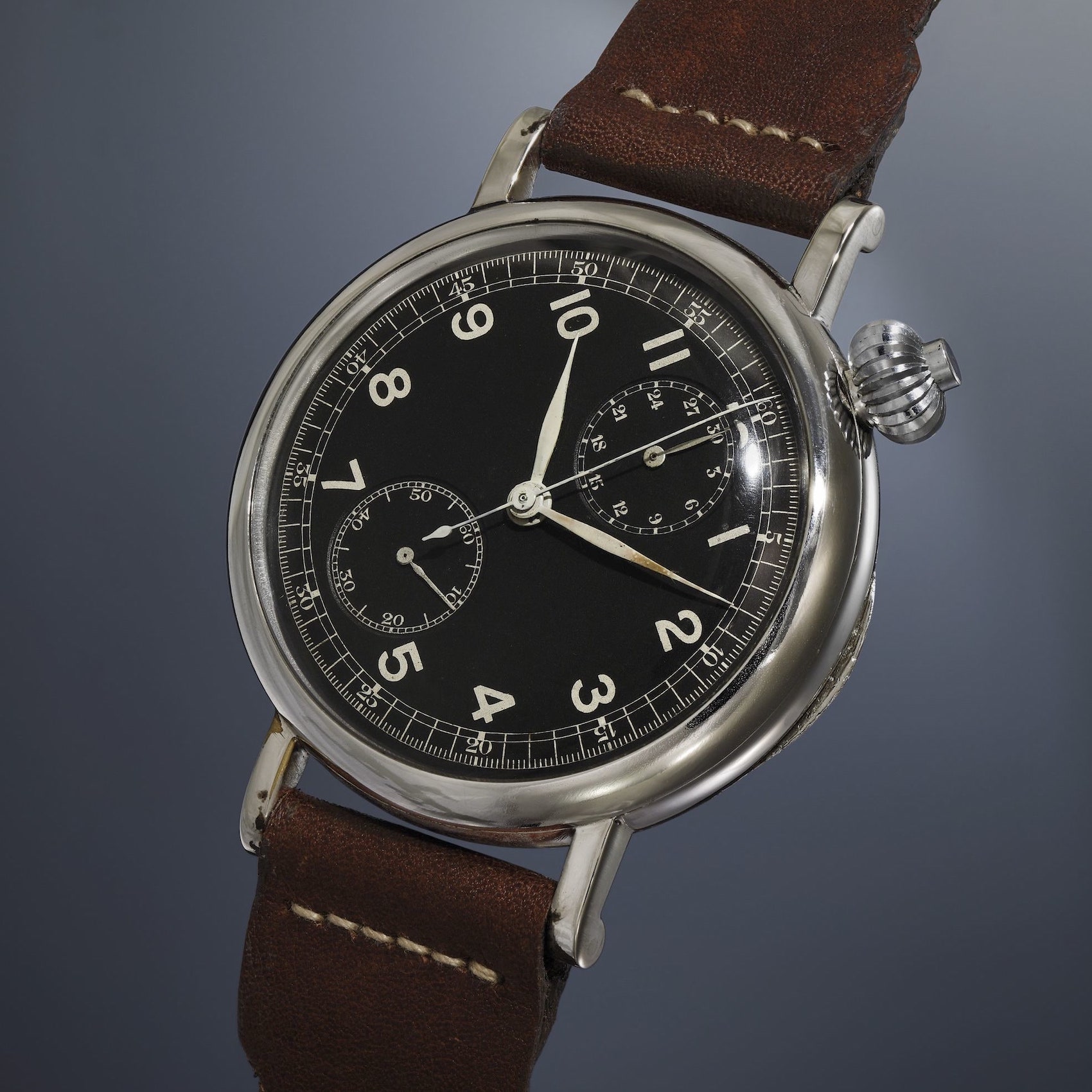 An oversized, circa 1935, Longines A7 “Avigation” watch, chrome-plated case, 51mm diameter, issued to the US Army. Photo by Phillips

In regards to pilot’s watches, Longines partnered with Charles Lindbergh as the official timekeeper of his historic flight across the Atlantic in the Spirit of St. Louis, in 1927. Another important watch in this field was, however, based on a military specification by the US Army. According to Phillips, “The US Army Air Corps (1926-1941), predecessor of the US Army Air Forces (1941-1947), and later on renamed US Air Force (1947 – present days) adopted Type designations for many of their issued equipment watches such as the “Type A” specification. The Longines A-7 “Avigation” was designed for aircraft navigation, “Aerial Navigation”, from which derives the conjunction Avigation.” 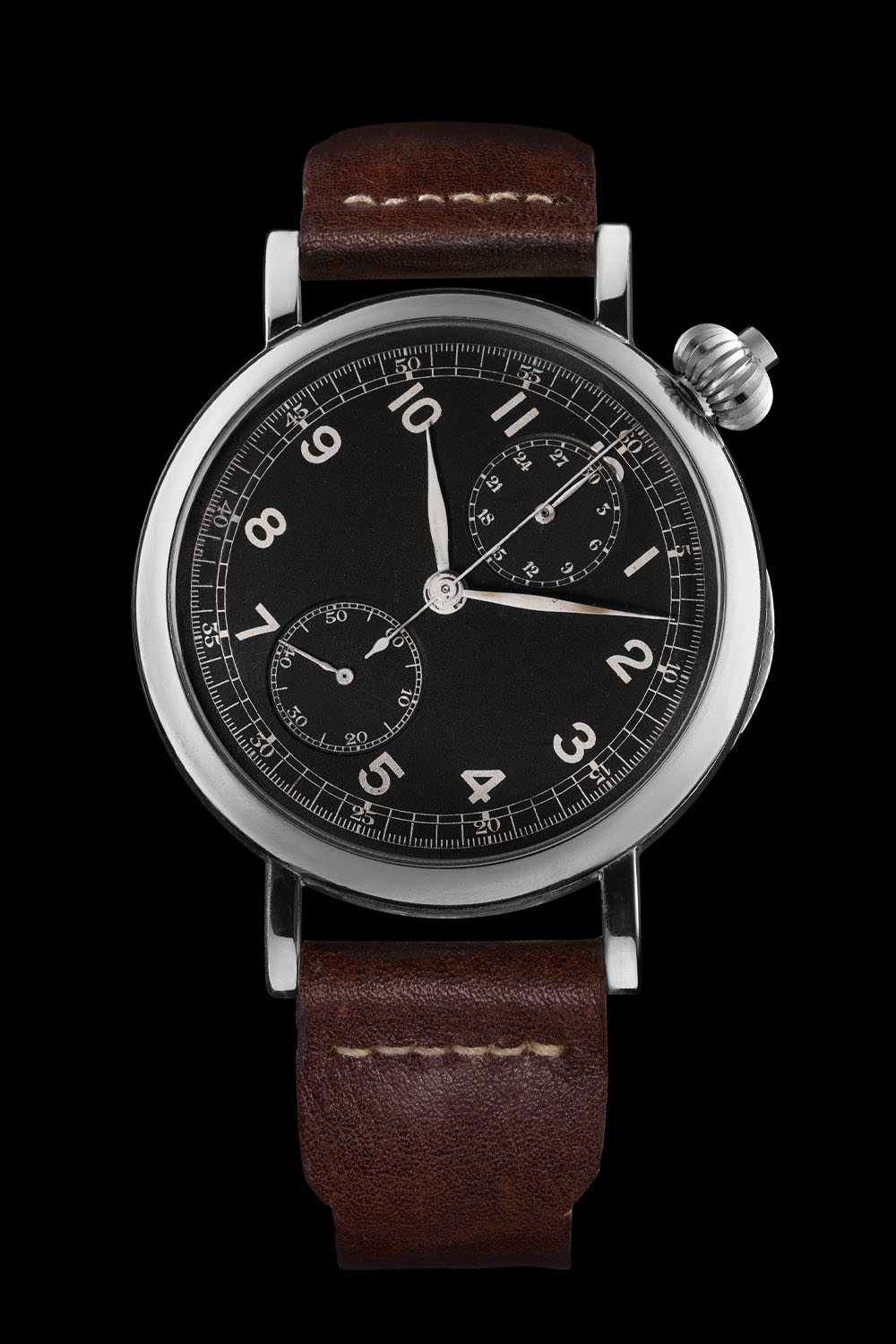 The Longines A-7 “Avigation” was built around a mono-pusher chronograph movement produced by Longines and Meylan during the 1930s and is an immediately recognizable watch. The watch has a specific “tilted” dial, with the display rotated by 40 degrees – this odd angle was designed to make consulting the time easier without the pilot having to take his hands off the stick. These watches were massive with their 51mm diameter chrome-plated metal (military examples) or stainless steel cases (civilian models, rare). Different dials were available, such as this black dial with Arabic numerals or white porcelain dials with Gothic numerals. 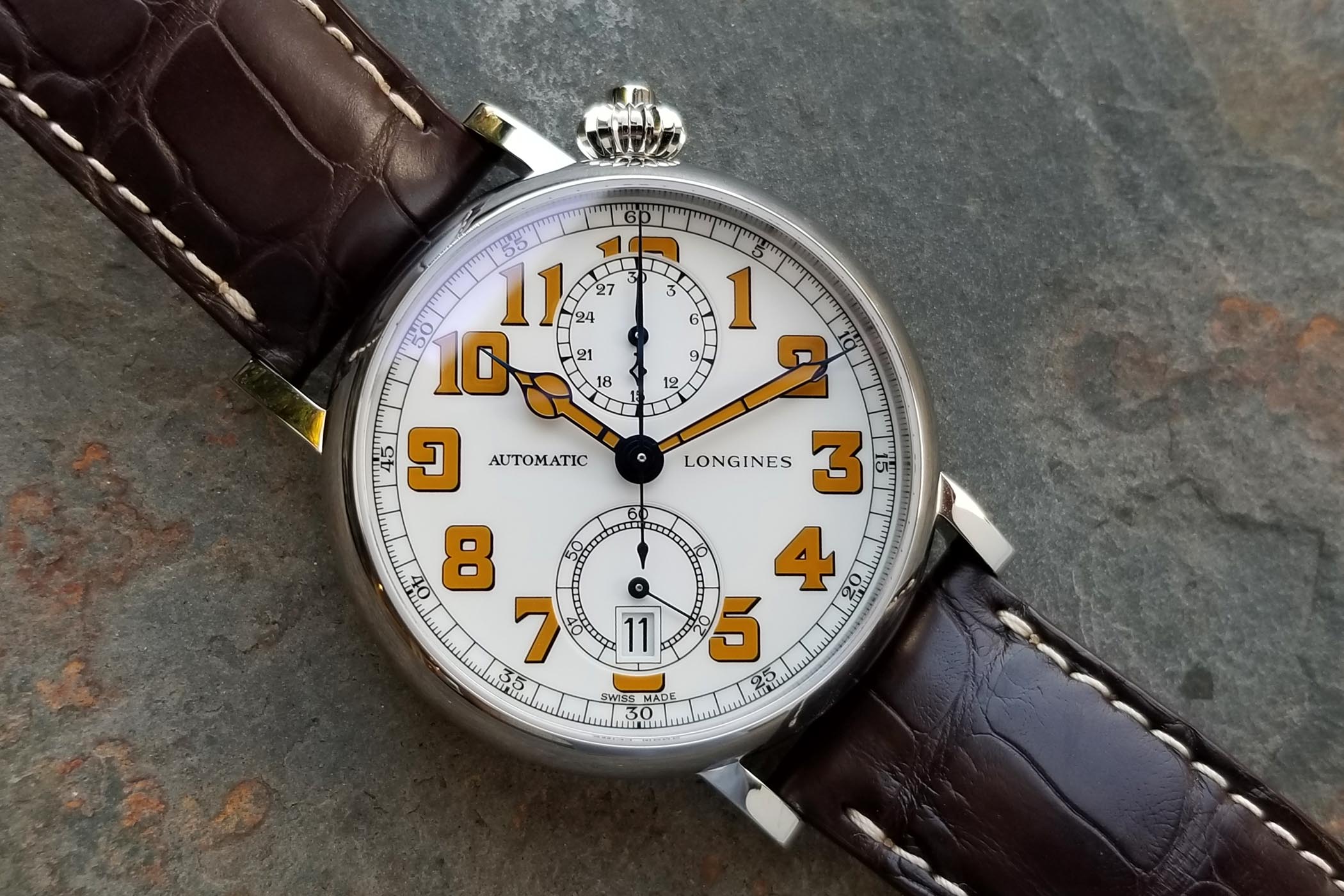 In 2012 Longines resuscitated this unique design with the first Longines A-7 Avigation, a monopusher chronograph with a shifted black dial and a 49mm steel case: a collector’s piece with no concession to ergonomics. In 2016, the brand also revived the white dial model with a 41mm case, as seen here. For 2020, this model is back in its classic black version, yet with daily-practicality in mind.

Modern re-editions of the Longines Avigation Type A-7 have always been very cool yet unusual watches – and we’re not talking about the signature tilted dial here. Indeed, the 2012 model was a beast on the wrist, which was barely wearable due to its 49mm case. Certainly, it was the most authentic of the re-editions, yet not one you could simply strap on the wrist to go to the office. In the same vein, the 2016 white dial model is quite charming and exotic, yet its style is not what you could call consensual. The numerals, the hands and, mostly, their colour gave a rather bold design to the watch. 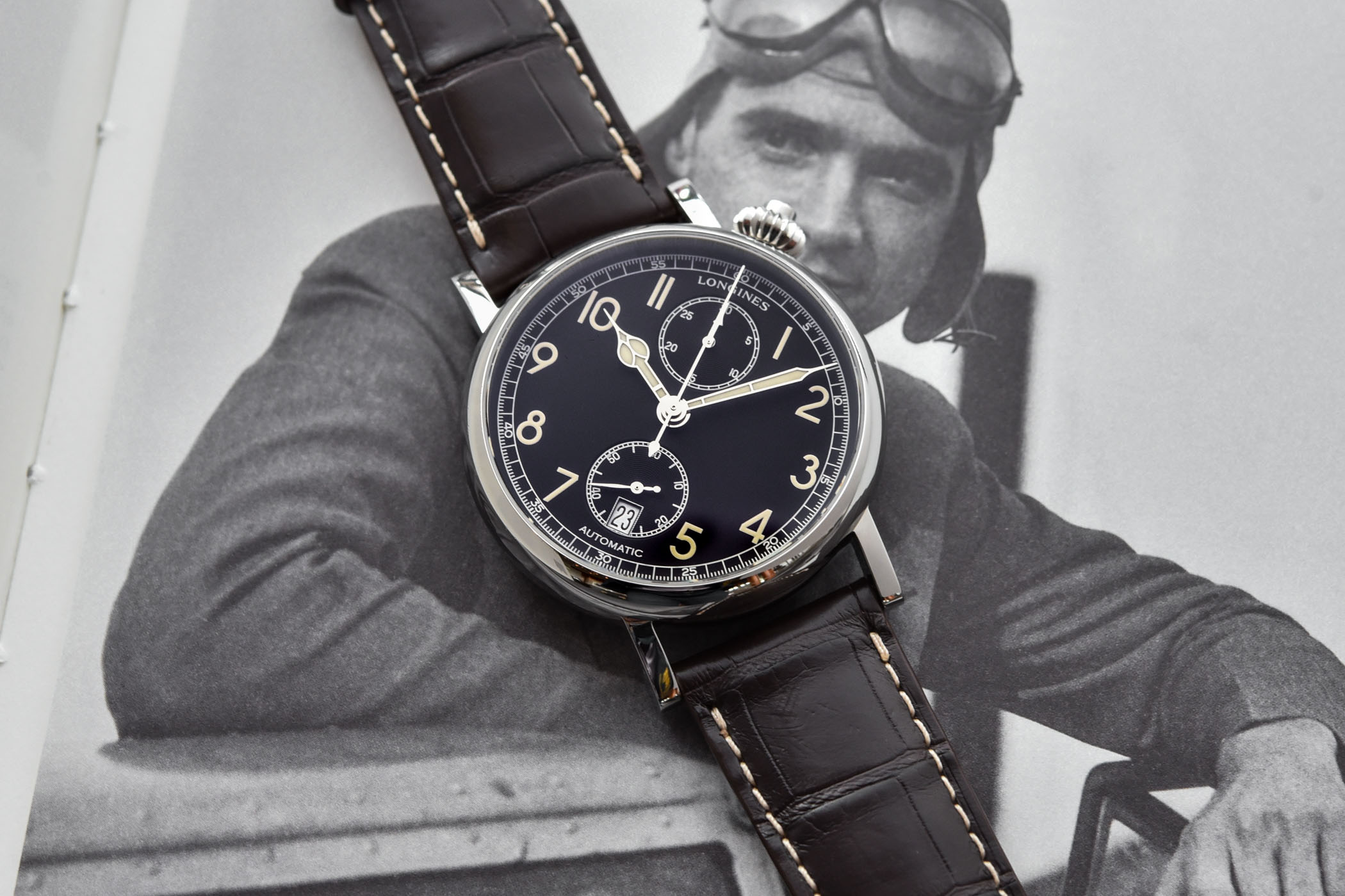 The 2020 edition of the Longines Avigation Watch Type A-7 1935 is, on the other hand, far more practical than the black version of 2012, and will also be more easily accepted thanks to its black dial. This 2020 model is clearly playing on the evocation of the past, and shouldn’t be considered a 1-to-1 re-edition of the original model. Longines can be very accurate in its Heritage collection, however, it rarely reproduces entirely the watches. Instead, it adapts the historic concepts to the modern tastes – yet plays on different levels of adaptations, from a simple resizing to more in-depth evolutions, like here. 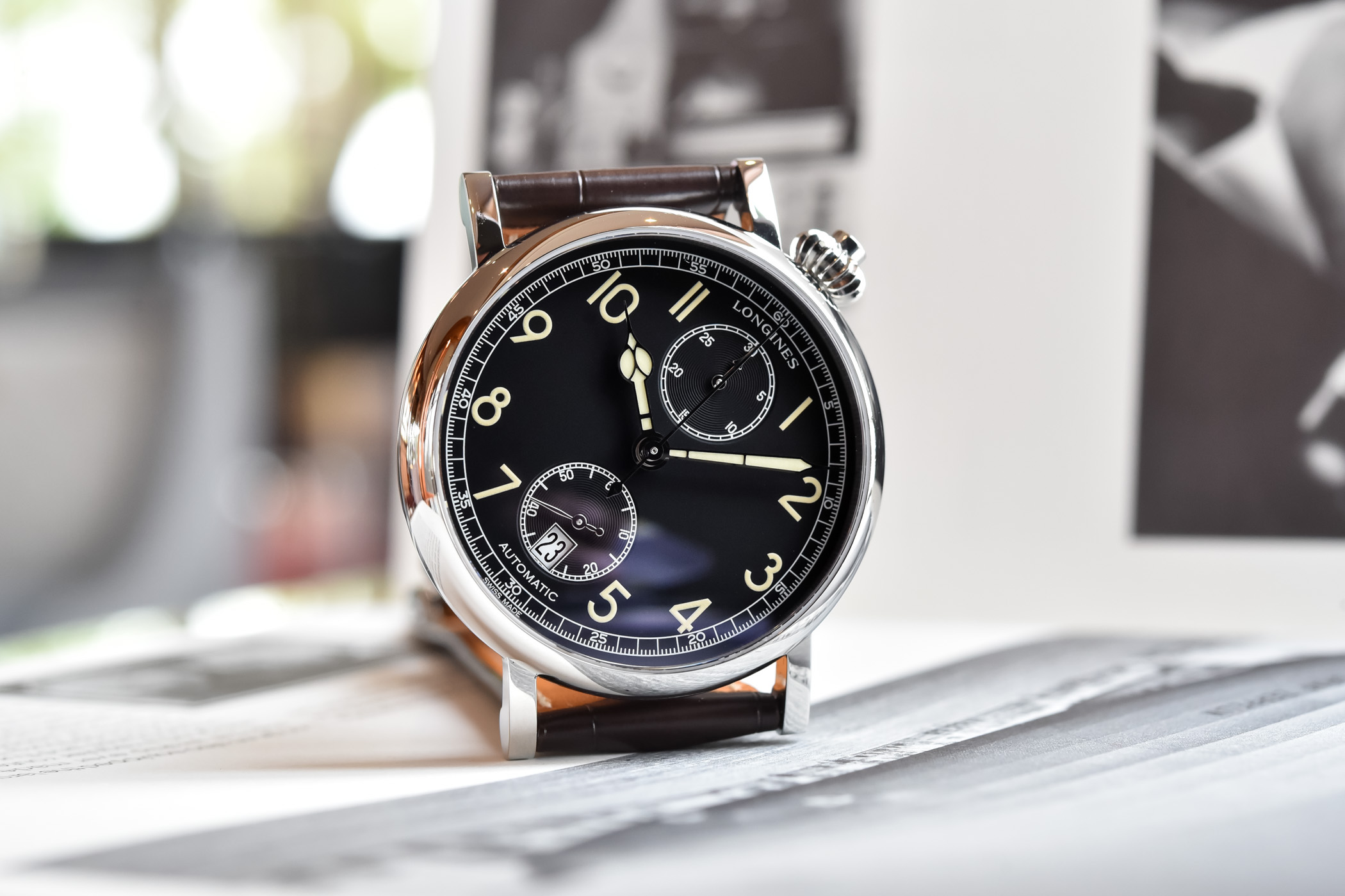 In this instance, we can immediately note the difference in proportions, but not in style. While drastically smaller than the original watch (by a whopping 10mm), the case retains all the design elements of the 1935 Avigation watch, with its soft, curved case evoking a pocket watch conversion, its elongated straight lugs, the wide opening of the dial and the co-axial onion-shaped crown/pusher module placed at about 2 o’clock. Still, the watch is now back to classic proportions, knowingly 41mm in diameter, 14mm in height and a lug-to-lug measurement of 48mm – all of which are in the norms for a modern automatic chronograph, giving both decent comfort and visual presence. The case shows entirely polished surfaces and its construction is precise and very clean, as always with Longines. The caseback is solid steel with an aviation-themed decoration. The 30m water-resistance leaves no doubt on the pilot’s vocation of this watch. 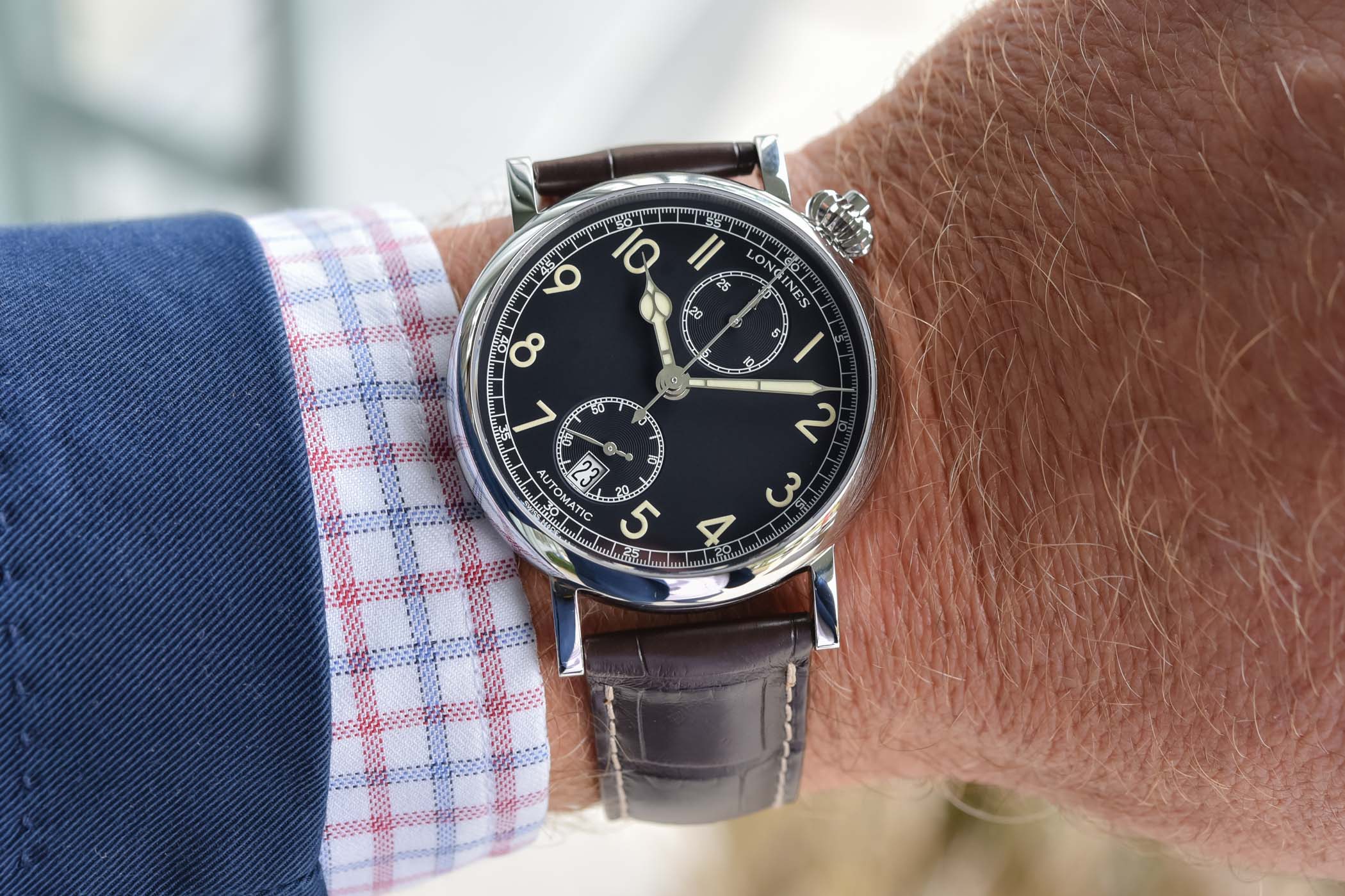 All of these elements aren’t, however, new to this 2020 edition of the Longines Avigation Watch Type A-7 1935 and were already used in the white dial model. The main update is to be seen here on the dial, which goes back to the classic military look of the vintage models. As such, the dial is matte black with a fine-grained texture, while the sub-counters have a concentric pattern. Another important update, which drastically changes the look of the watch, is the simple Arabic numerals, far more minimalistic and unintrusive than the Gothic ones on the white dial edition. This combination brings a better contrast and makes time reading easier – and this isn’t a bad thing, since the crooked dial, as cool and iconic it might be, requires some time to become easy to read. Expect a short adaptation period before being entirely comfortable with the position of the indexes, however, this tilted dial is THE main reason for the charm of this watch. 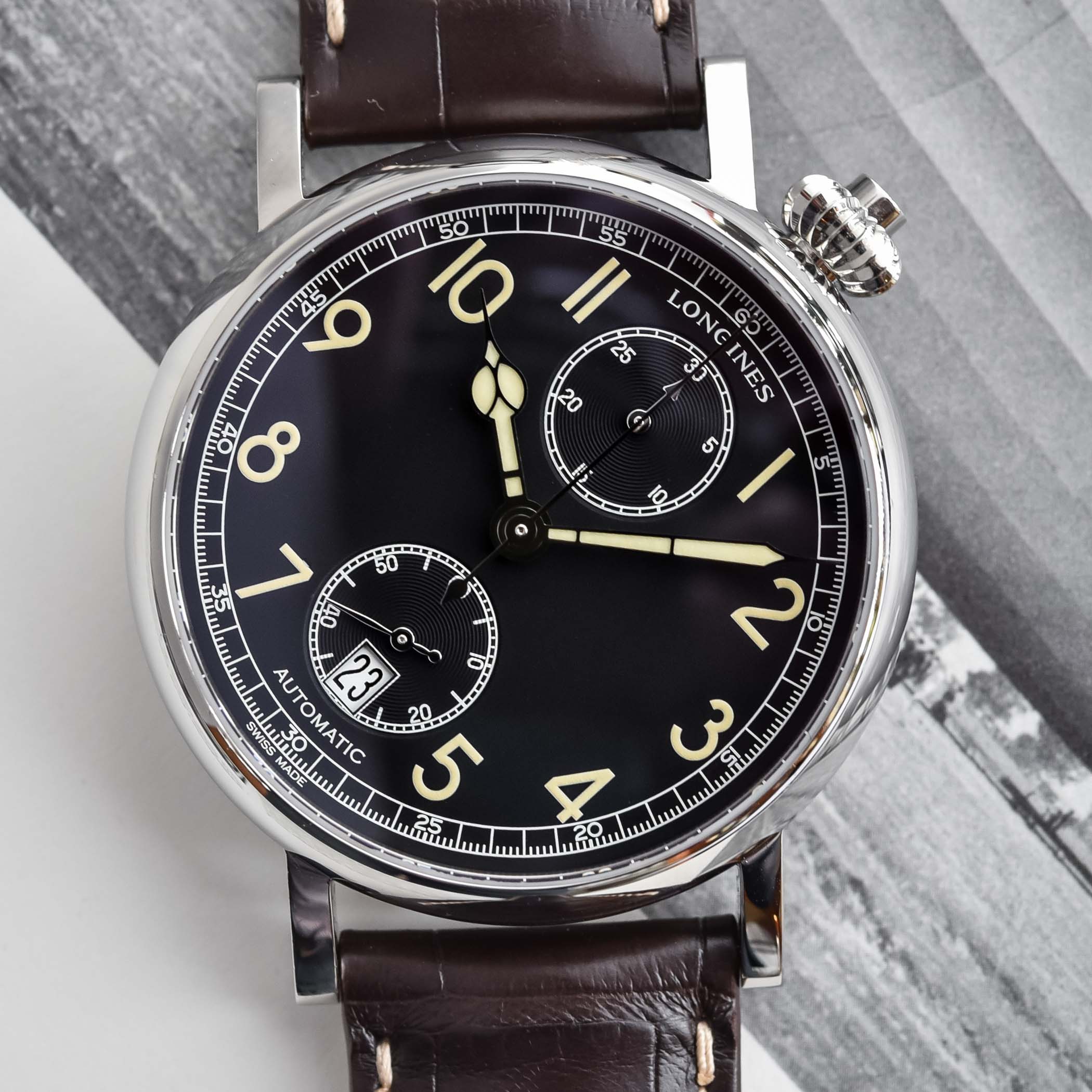 The hands of this Longines Avigation Watch Type A-7 1935 retain their “Cathedral” profile, which certainly is pleasant in terms of design, however, leaf-shaped hands like the original military watches would have been more accurate (but maybe less appealing). All luminous elements are coated with beige-coloured Super-LumiNova, adding a warmer look to the watch. And finally, there will be the debate of the date window in the small seconds counter… Relevant or not, to each his own. 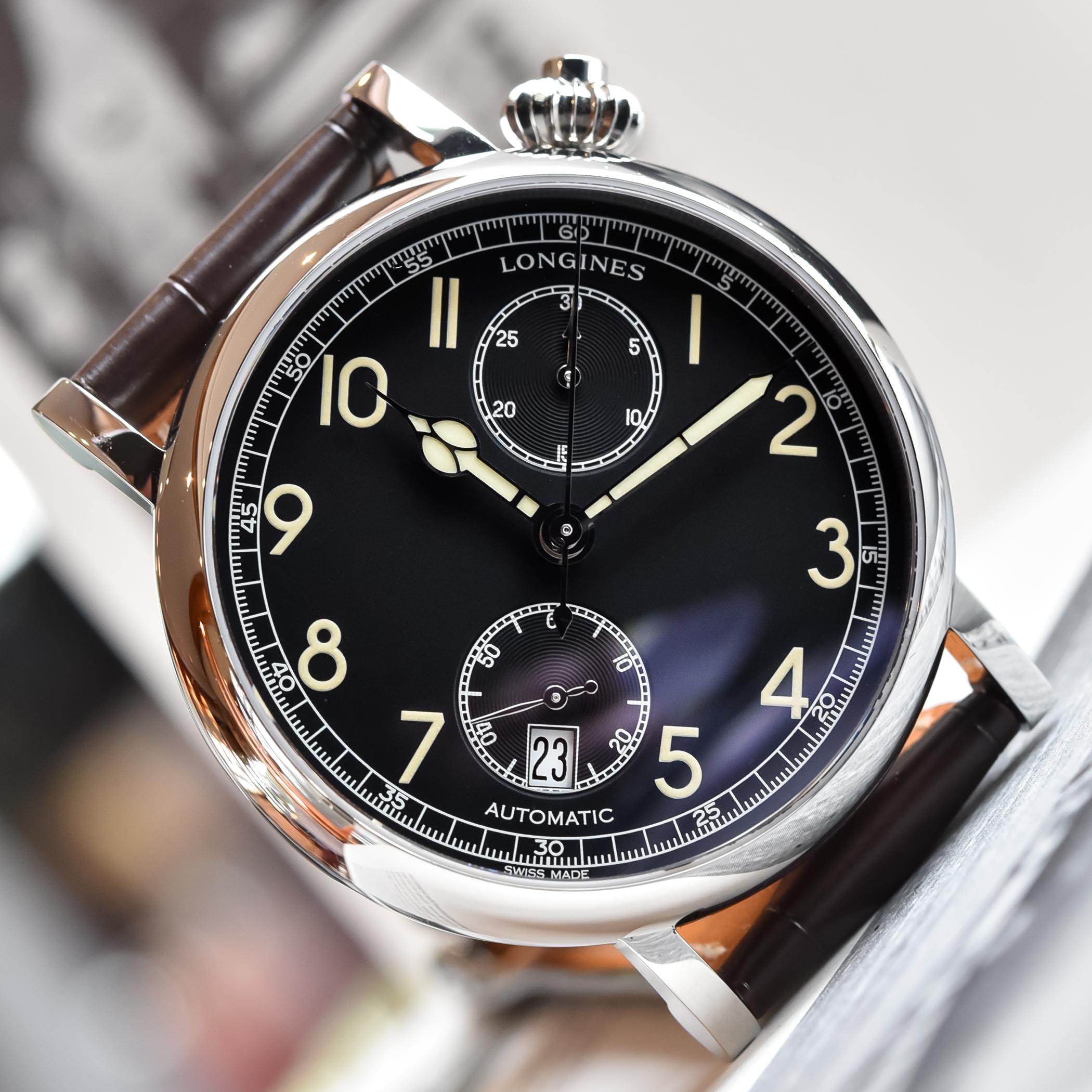 In classic Longines tradition, the movement inside the Avigation Type A-7 1935 is not a standard, “off the shelves” engine. What beats inside is the automatic Calibre L788.2, a movement that shares some of its parts and architecture with the 7750, however, drastically modified to meet with Longines’ standards. The most obvious update concerns the way the chronograph is actuated, with a mono-pusher controlling the start-stop-reset functions. The other important evolution concerns the architecture of the chronograph itself since the cam-lever command has been replaced by a smoother and more accurate column-wheel construction. This movement, exclusive to the brand, runs at 28,800 vibrations/hour and boasts a comfortable 54h power reserve. 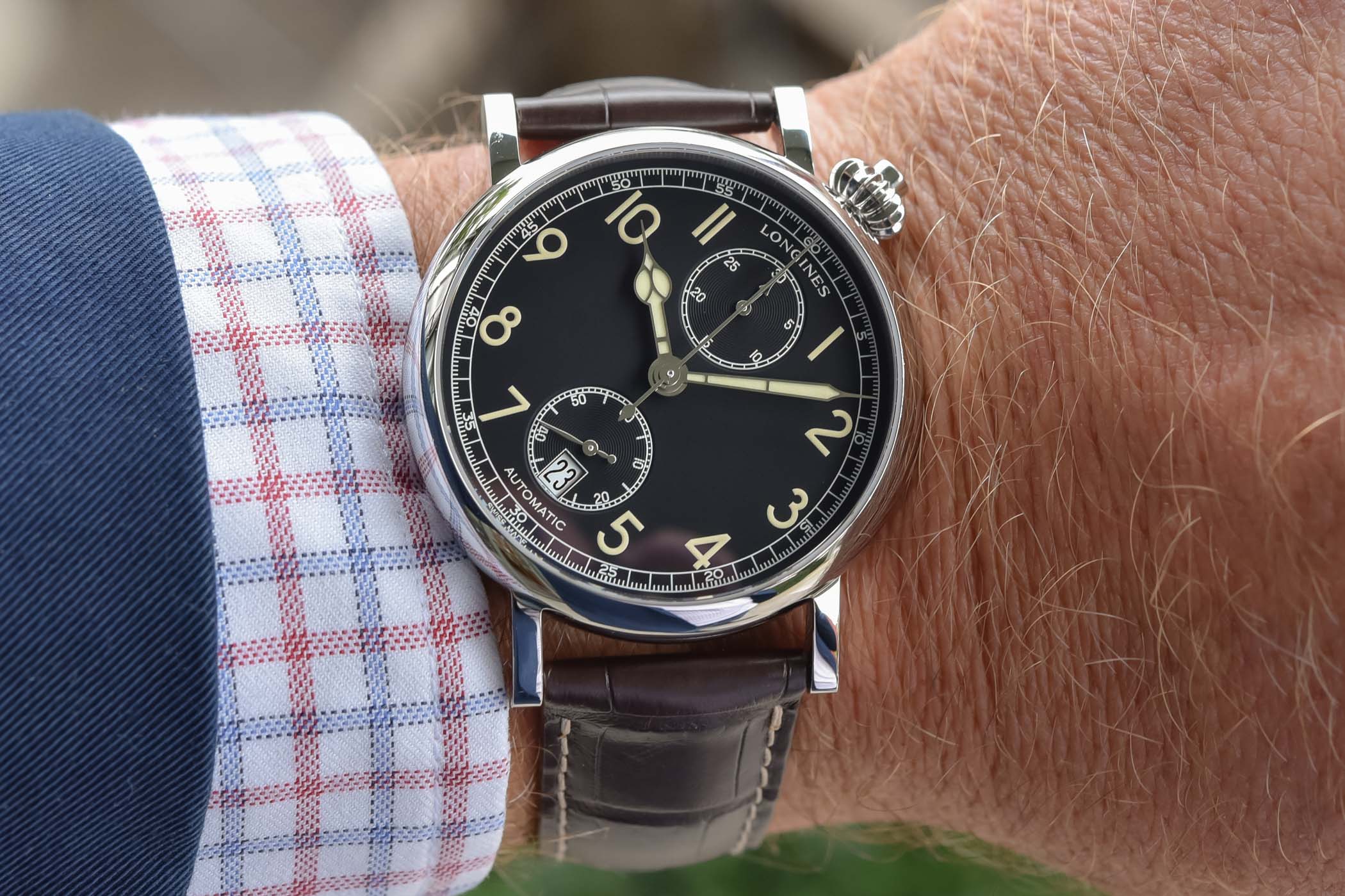 The Longines Avigation Watch Type A-7 1935 is worn on a brown alligator strap with cream-coloured stitching, closed by a stainless steel pin buckle. While the strap certainly fits the watch nicely, I think it would look even cooler on a rougher, more military-oriented strap.

The 2020 edition of the Longines Avigation Watch Type A-7 1935 with black dial (ref. L2.812.4.53.2) is released in the permanent collection and is now available from retailers and at the brand’s online boutique. It comes in addition to the white dial model, which is still available. It retails for EUR 3,280.