1969 was a prolific year for the watch industry. We could talk about the Moon Landing or the introduction of several iconic timepieces. But when it comes to innovation and pure watchmaking, 1969 should be remembered mainly for the introduction of the first automatic chronograph movements. Among them were the El Primero and the Chronomatic/Calibre 11, but a third manufacture also came on the market with this technology… Seiko. To commemorate this important milestone in the brand’s history, here’s the Seiko Prospex Automatic Chronograph 50th Anniversary Limited Edition SRQ029. 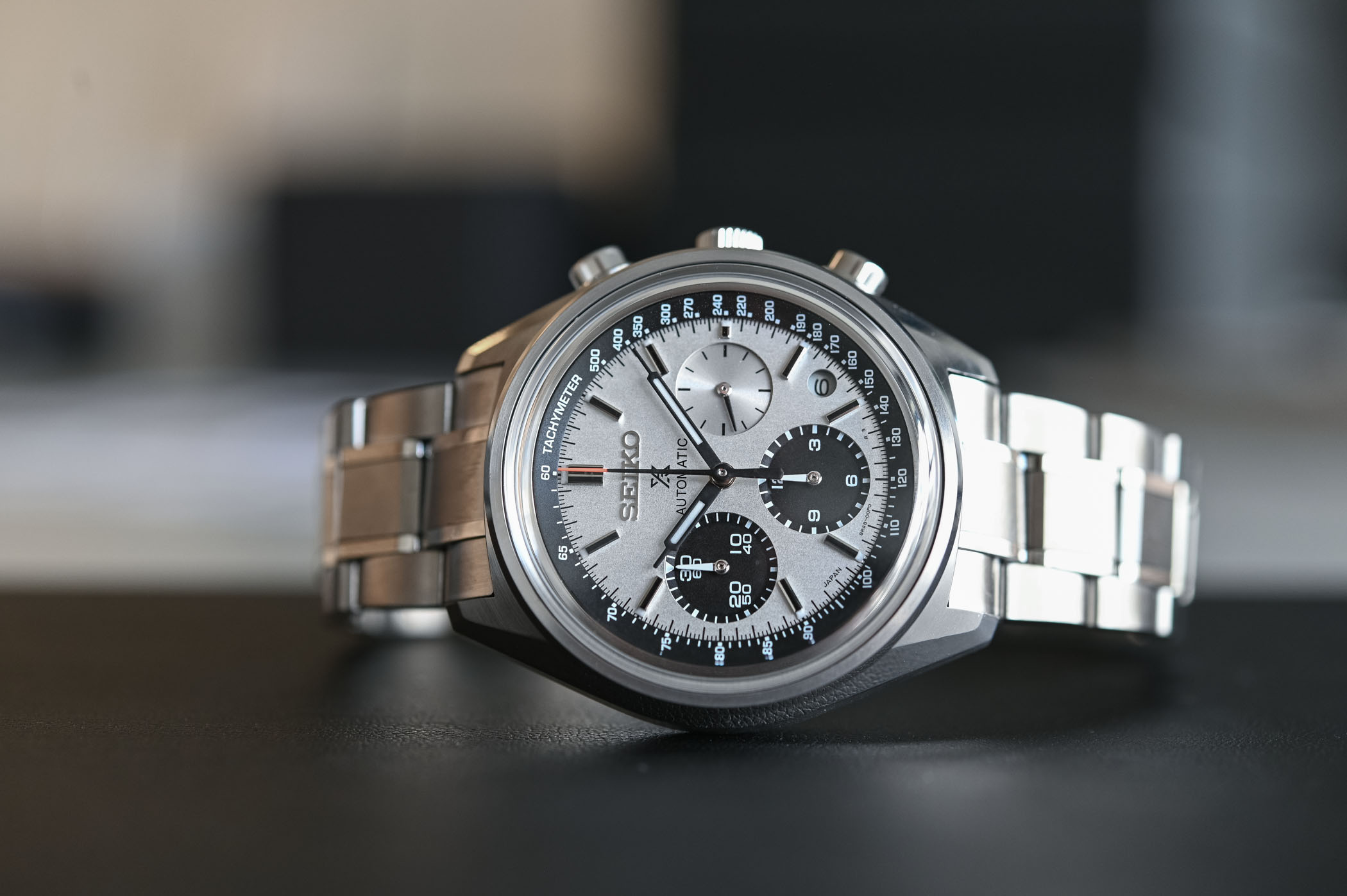 The new 50th Anniversary Limited Edition SRQ029 is part of a sub-collection comprising two watches, the other one celebrating the 55th anniversary of Japan and Seiko’s first chronograph, as shown below (and also reviewed on MONOCHROME).

Whether it is for the concept of professional dive watches and its influence on the ISO 6425 standards, or for chronographs, Seiko’s contribution to innovation in watchmaking is indisputable. Seiko was part of the three manufactures/joint-ventures that, almost coincidentally, launched the first automatic chronograph movement, back in 1969.

Seiko was part of the 3 ventures that developed coincidentally the first automatic chronograph, and its contribution is still impressive today.

Three manufactures, three different visions. First was Zenith with the El Primero, a high-frequency but traditional horizontal clutch, integrated movement with a central rotor. Second was the joint venture Heuer/Hamilton/Breiling venture, associated with Buren for the base movement and Dubois-Depraz for the chronograph, with a modular movement named Calibre 11 or Chronomatic, with micro-rotor automatic base and chronograph plate on the backside. 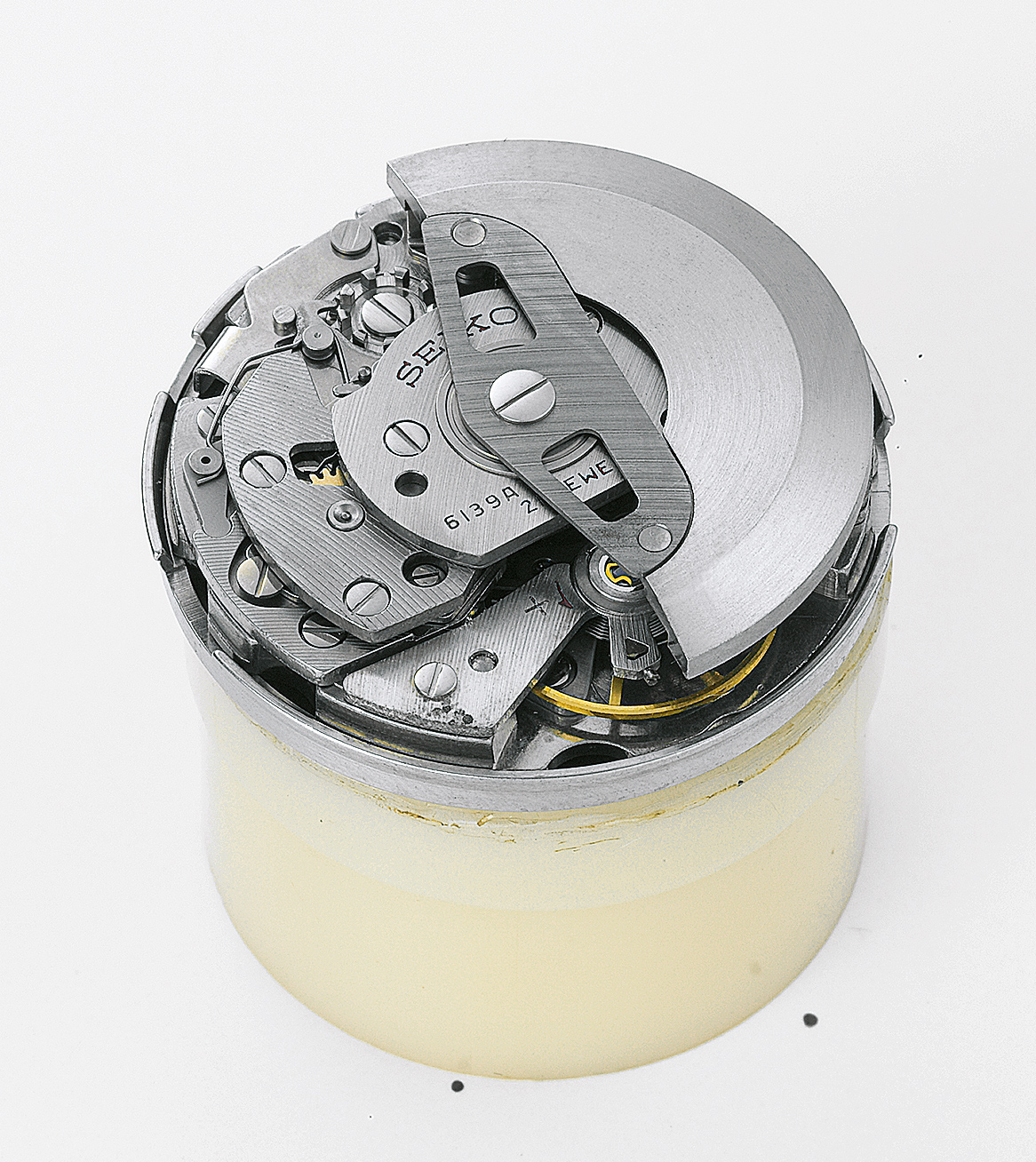 The calibre 6139, Seiko’s first automatic chronograph in 1969 – image by Watchtime

Seiko’s vision was more modern, cost-effective and focussed on industrialisation. In 1969, the Japanese brand launched the calibre 6139, one of the world’s first automatic chronographs but also the world’s first automatic chronograph with a column wheel and vertical clutch. Seiko, with this 6139, went for an integrated architecture, where the chronograph parts are not added to an existing movement but integrated into a single design. Also, the combination of a column wheel and a vertical clutch would later become the norm for high-end chronograph movements. But back in 1969, this was an important breakthrough delivering real improvement in precision.

Other specifications included a 3Hz frequency, a diameter of 27.4mm and a height of 6.5mm, a centrally-mounted automatic rotor, with Seiko’s innovative Magic Lever, a click-winding system and a 36-hour power reserve (when the chronograph is working). It was later replaced by the improved calibre 6138, an evolution of this movement with 12-hour counter. 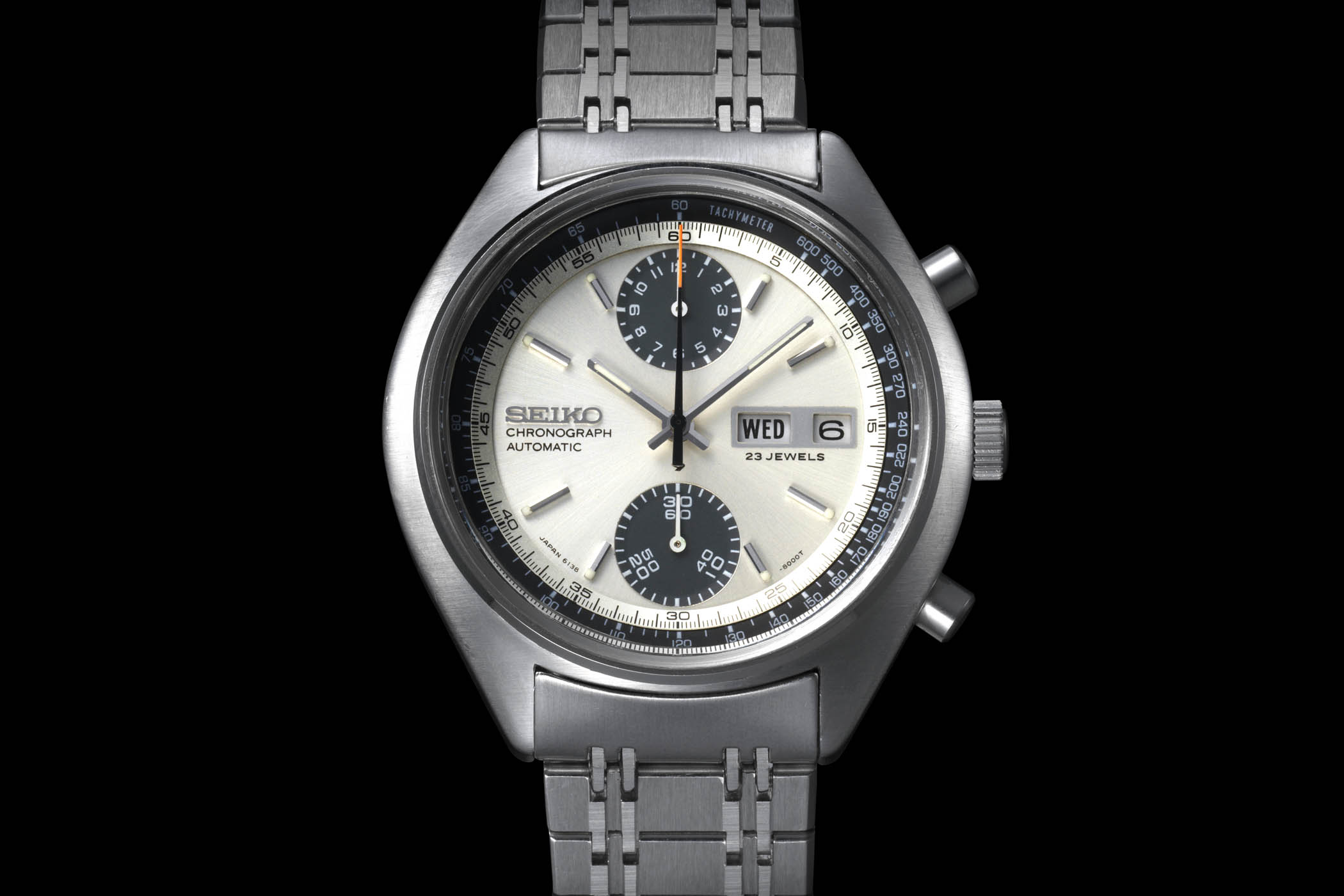 The 1969 Seiko Panda Chronograph with Calibre 6139, one of the first automatic chronographs

To launch this movement, Seiko introduced several watches, which included a day-date complication but only a 30-minute sub-counter. Later came the Panda chronograph, a sporty, deliberately modern watch with a typical cushion/helmet-shaped case, steel bracelet and space-like design. The dial featured two vertically aligned sub-counters – 30-minute and 12-hour – in black over a silvery-white brushed dial, meaning it was equipped with the calibre 6138. This is the watch that serves as an inspiration for today’s commemorative Prospex Limited Edition SRQ029.

Today, Seiko launches the Prospex Automatic Chronograph 50th Anniversary Limited Edition SRQ029, a watch meant to celebrate the 50th anniversary of the brand’s first automatic chronograph. Obviously, it no longer features the calibre 6139/6138 but a modern in-house calibre instead. However, the design of this SRQ029 clearly pays tribute to the early automatic chronographs of the late-1960s/early-1970s. Still, this isn’t a copy but more a modern reinterpretation. 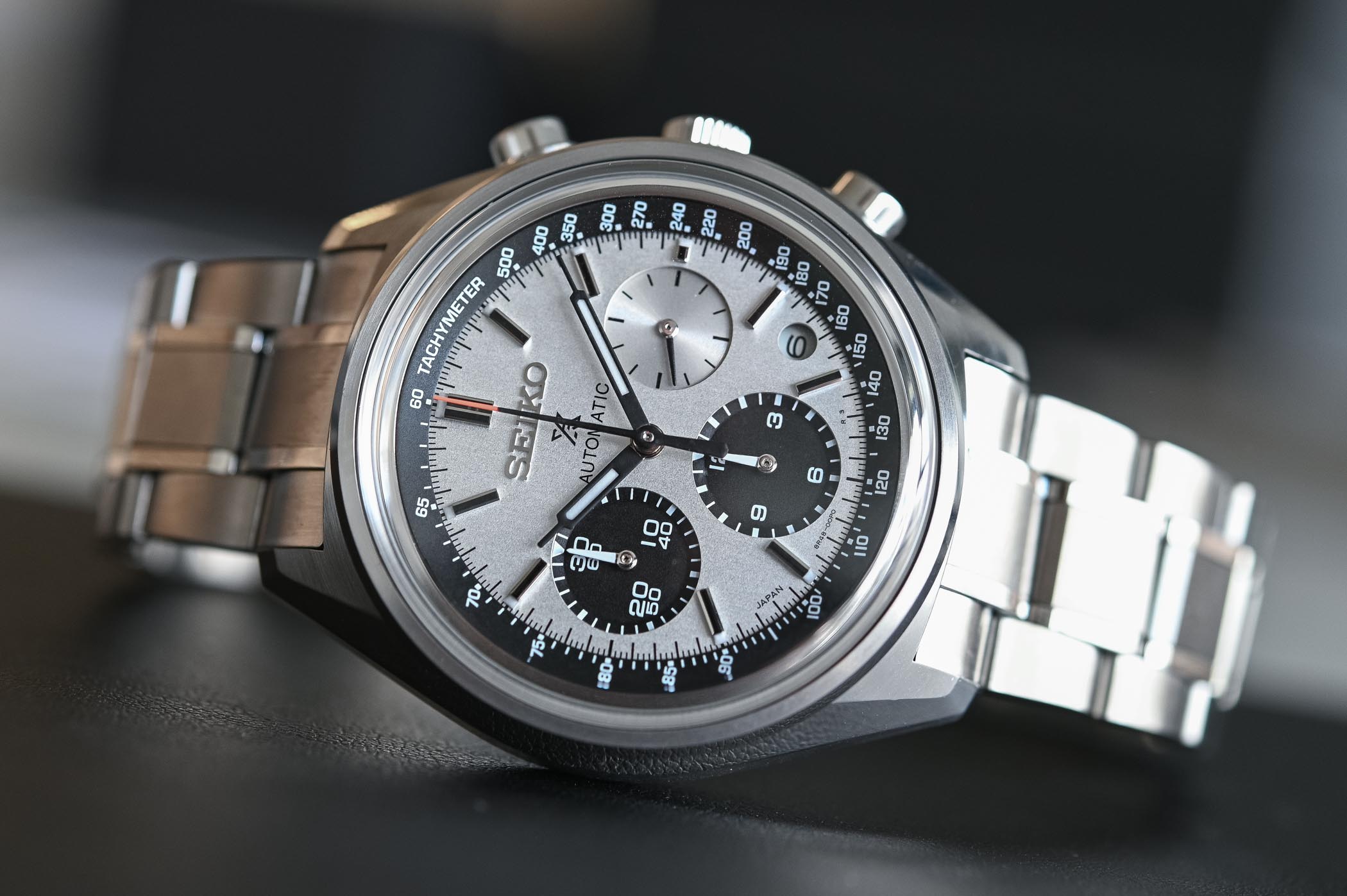 The new Prospex Automatic Chronograph 50th Anniversary is a shaped watch, with integrated lugs and robust design. It is made of stainless steel case with super-hard coating, as you can expect from Seiko, and its surfaces are alternating brushed areas and bright, polished accents and casebands – with the famous and superb Zaratsu polishing technique, resulting in distortion-free reflections. This watch might be branded under the Prospex family but it isn’t part of the affordable collection and isn’t treated as such.

The case has some presence on the wrist and feels solid as a rock – its 16mm height contributes to this feeling. Still, Seiko has chosen a relatively reasonable diameter of 41mm. The Prospex Automatic Chronograph SRQ029 is topped by a highly domed sapphire crystal, giving this watch a vintage look but also a great appeal. The case is water-resistant to 100m and the SRQ029 is delivered on a three-link steel bracelet with a three-fold clasp and push-button release. Overall, the quality of the execution isn’t far from Grand Seiko models.

The dial clearly evokes early Seiko’s chronographs but has been updated with the modern mechanics inside the watch, with a 3-compax layout instead of the two vertically aligned sub-counters. This Prospex Automatic Chronograph SRQ029 has a silver-panda dial, with a silvery-white hairline finish – just like the original watch. Two of the sub-counters, related to the chronograph indications, are executed in black, just like the tachymeter scale on the inner flange. The small seconds at 3 o’clock has the same colour as the rest of the dial and a touch of yellow on the seconds hand reminds of the 1969 model. 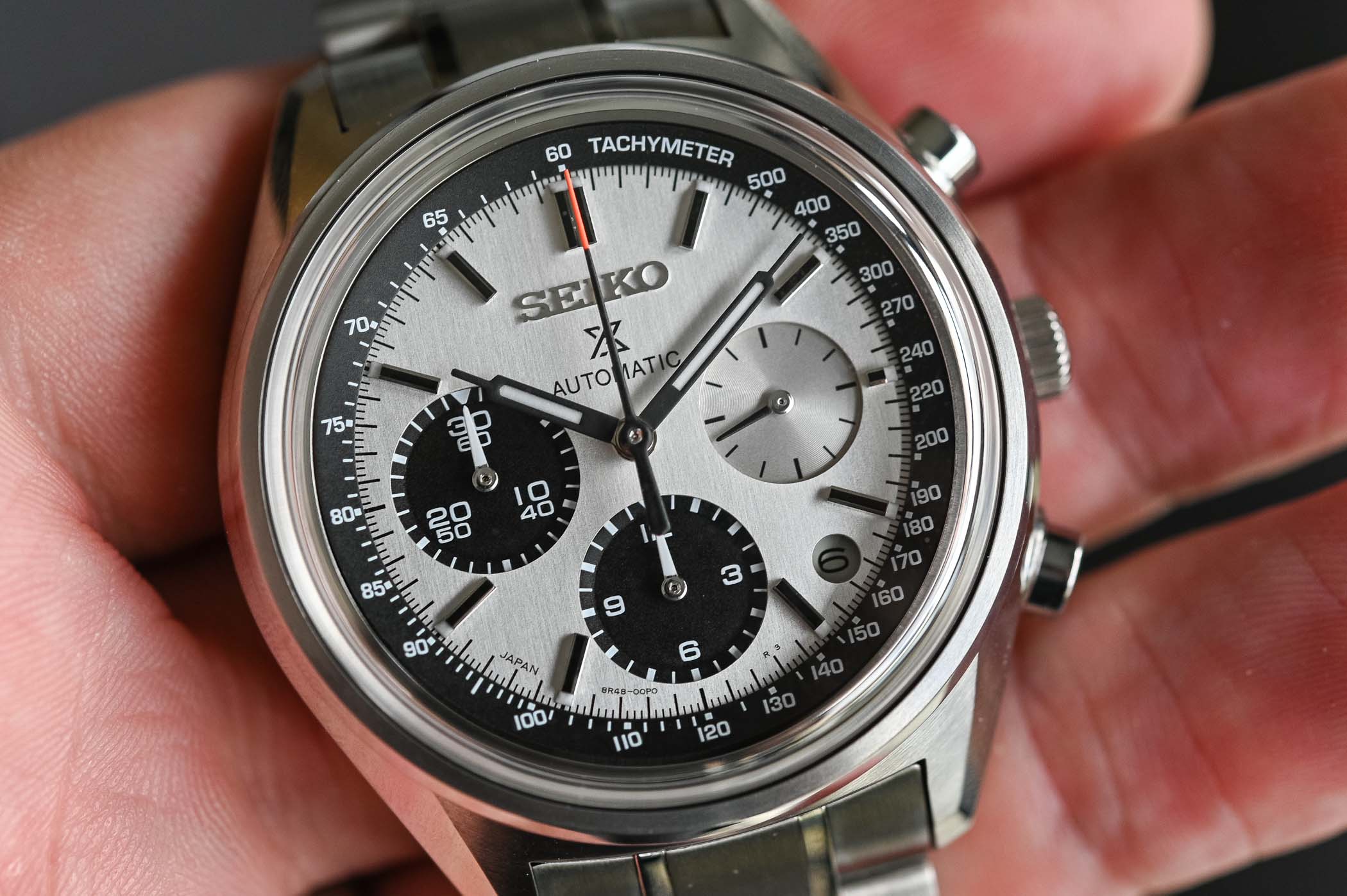 The dial of this SRQ029 has great contrast and is easily legible, thanks to blackened hands, applied hour indexes and white-on-black or black-on-white markers. A date is positioned at 4h30, in a circular window. 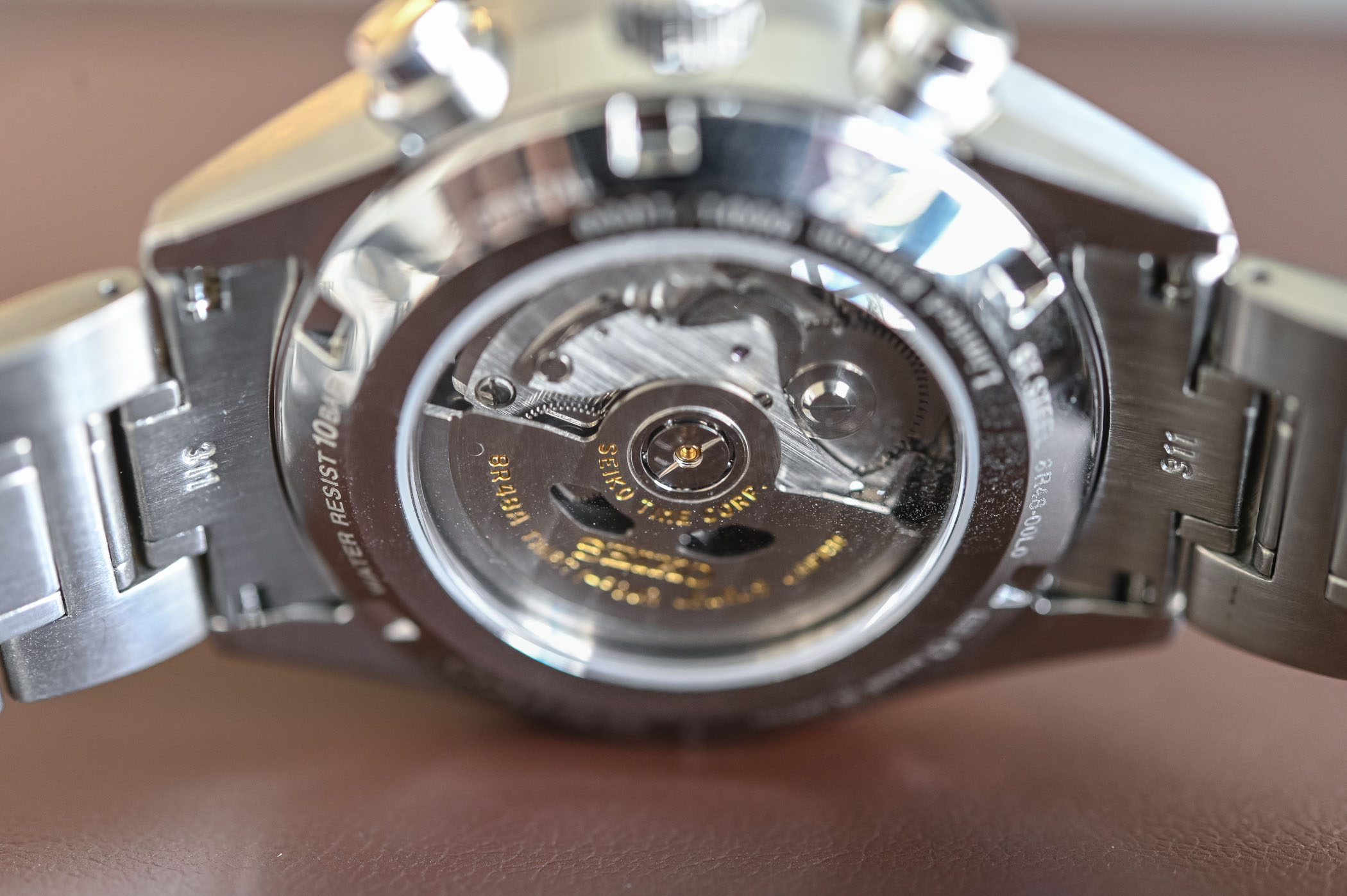 To power this Seiko Prospex Automatic Chronograph 50th Anniversary Limited Edition SRQ029, the brand relies on its well-known calibre 8R48, a movement we’ve already seen in the Seiko Presage Enamel Chronograph. This movement, launched in 2014, is Seiko’s high-end integrated chronograph calibre (not talking GS, of course), with a 4Hz frequency, a vertical clutch and column-wheel architecture, Seiko’s unique three-pointed hammer and a heart-shaped cam which ensure the perfect synchronisation of the flyback function and a centrally mounted automatic rotor. Surprisingly, Seiko chose to have the chronograph parts on the dial side, so this calibre 8R48 doesn’t show much through the sapphire caseback. It is finished in an industrial way, with brushed surfaces. WATCH & ACT! – Together with Time+Tide, Help Fight The Australian Bushfire Crisis With Great Watches To Be Auctioned

If you’re looking for the modern equivalent of the Royal Oak, your search should start and finish with the Bvlgari Octo Finissimo Automatic. There,...

Video – Understanding the Armin Strom Gravity Equal Force and its...

WATCH & ACT! – Together with Time+Tide, Help Fight The Australian...