The combination of a chronograph and a perpetual calendar is the epitome of what Patek Philippe does best. This year we were regaled with not one but two 5270 references, one in platinum with a much-praised salmon-coloured dial and this rose gold model with an ebony dial. Dripping in 18k rose gold from head to toe, Patek’s Ref. 5270/1R is as different from its platinum brother as chalk and cheese. With the same sophisticated in-house manual-winding movement as its sibling, the 5270/1R comes with a sumptuous rose gold bracelet with the QP correctors artfully hidden in the links. 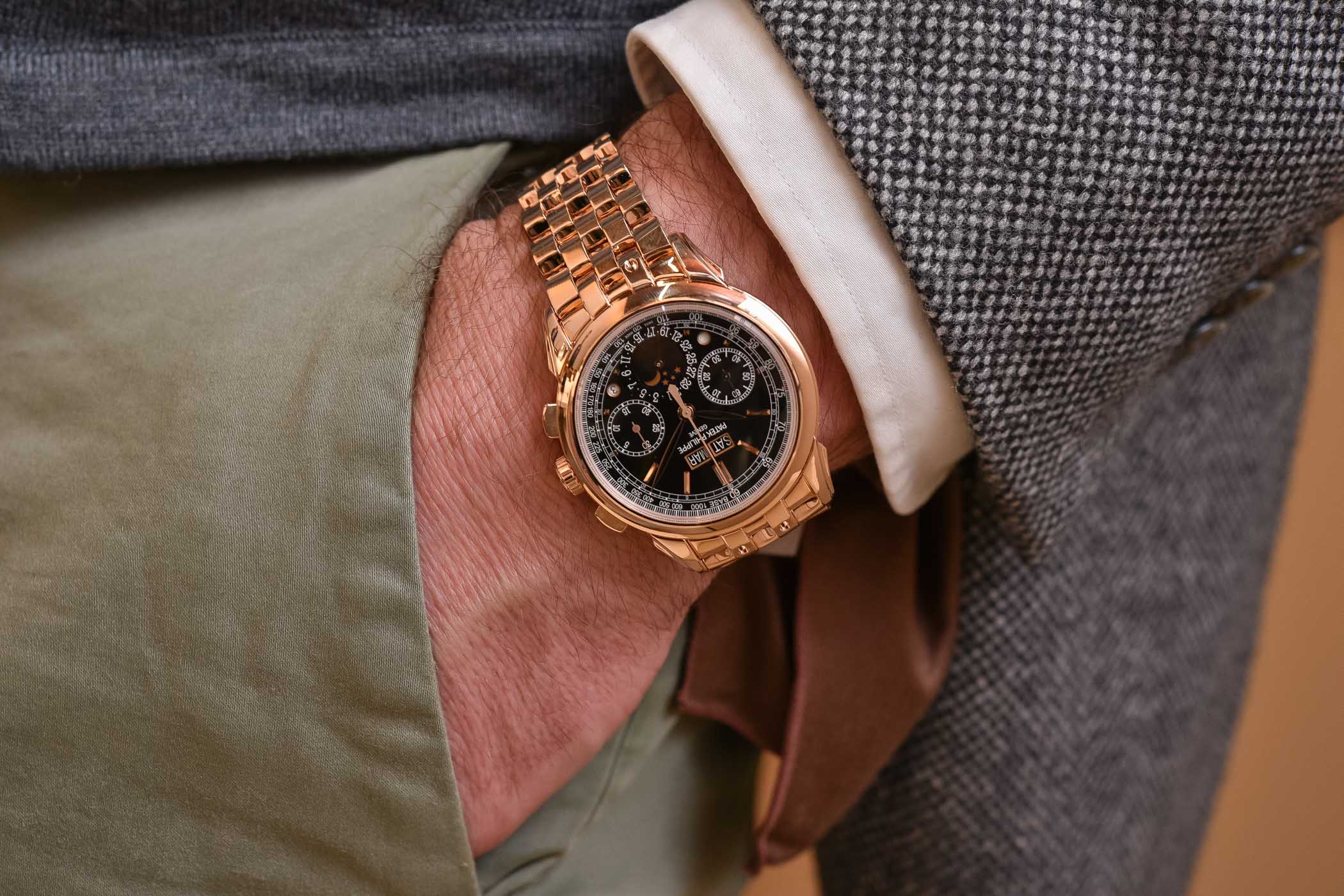 The King of Complications

The Perpetual Calendar Chronograph is considered by many as the pinnacle of Patek Philippe’s watchmaking prowess and its first chapter was written in 1941 with the launch of legendary Ref. 1518. The first serially produced perpetual calendar with chronograph, Ref. 1518 was decades ahead of other brands. A holier than holy grail piece, the $11 million paid for a stainless steel 1518 model from 1943 at an auction held by Phillips two years ago (setting the world record for the most expensive wristwatch ever sold at auction, until it was superseded by Paul Newman’s Rolex Daytona which accrued $17m in 2017) gives you an indication of the bidding frenzy these watches can generate. 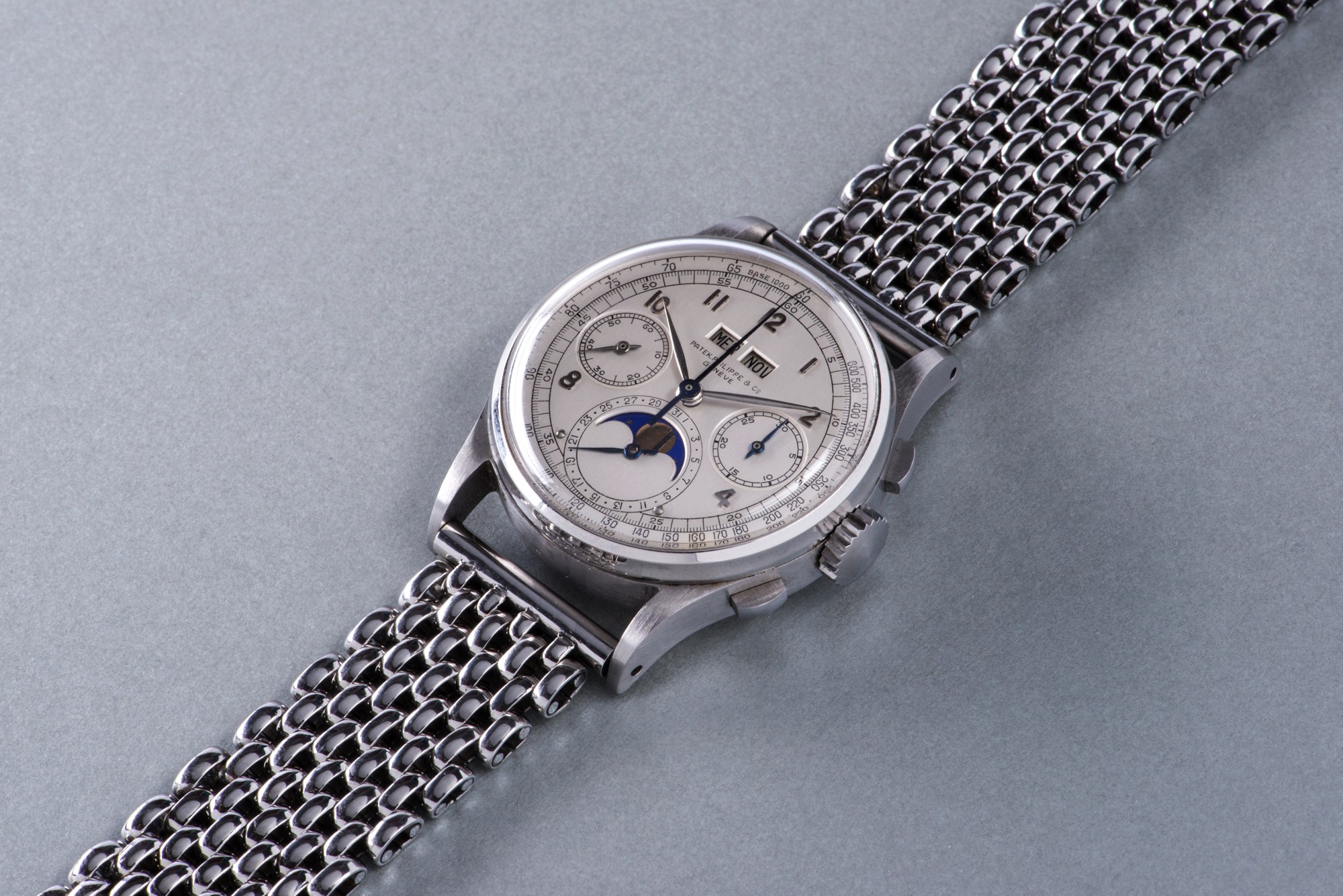 The Patek 1518 in steel sold by Phillips – This model was the first serially produced perpetual calendar chronograph. Photo: Courtesy of Phillips

As a member of this royal lineage, the current representative – Ref. 5270 – made its debut in 2011 with a redesigned dial, a larger 41mm case size and, most importantly, an in-house manual-winding movement, calibre CH 29-535 PS Q. For a review of the genesis of the 5270 over the past seven years, you can read our in-depth article here.

Admittedly, a certain amount of confidence (and a healthy bank account) is required to strap on this mighty Midas. Dripping in 18k rose gold from head to toe, Patek’s Ref. 5270/1R is as different from the platinum model as night and day. As any Patek enthusiast knows, previous 5270 references came on a handsome alligator strap. For 2018, a stunning rose gold bracelet makes its debut. Neither the case, the movement, or the bracelet are new – the gold bracelet is also shared by the Ref. 5204 Split-Seconds Chronograph Perpetual Calendar – but the combination of this bracelet on this watch is what is novel. 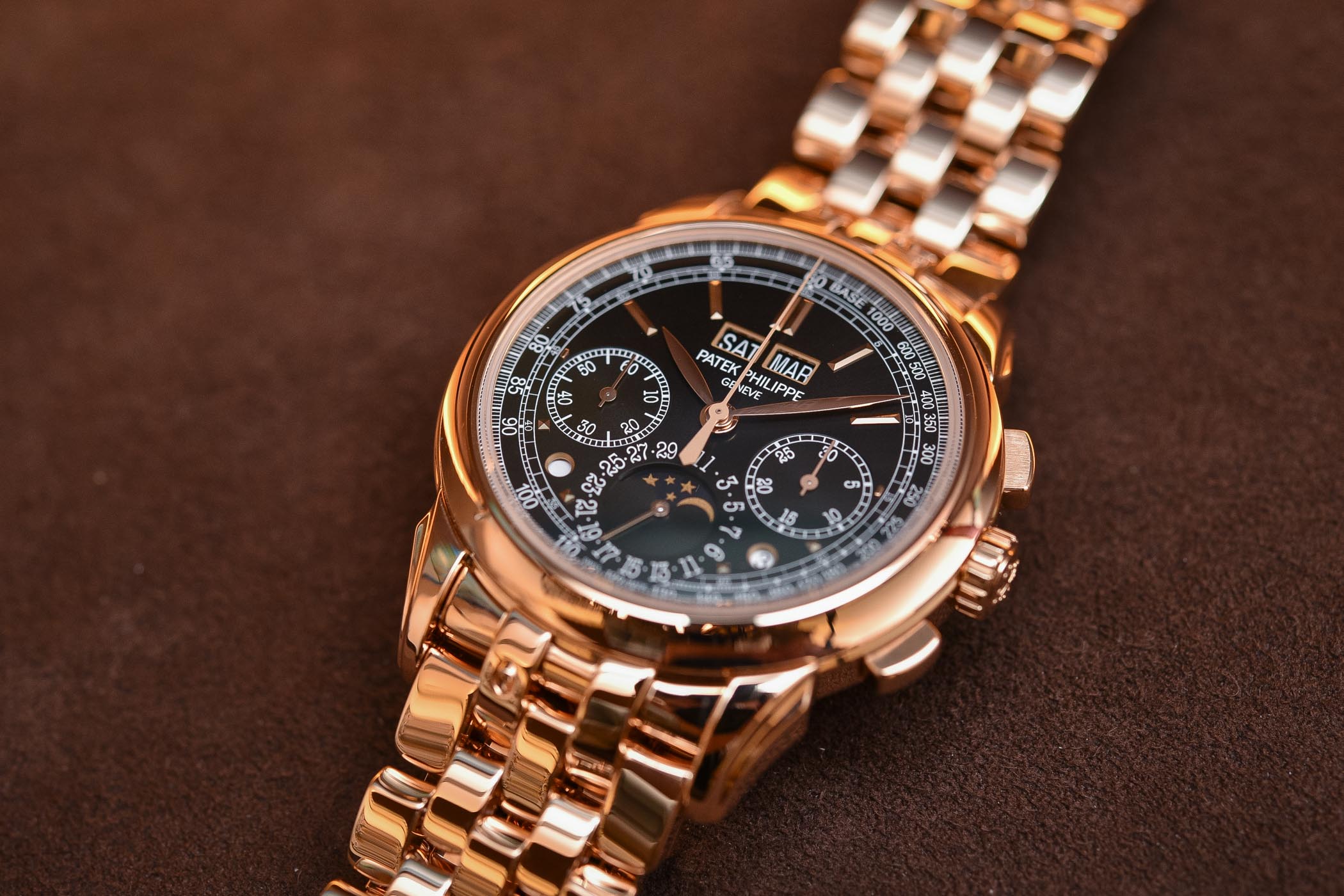 Described as ‘goutte’ or droplet style, the 18k rose gold bracelet blends seamlessly into the case and is composed of five rows of droplets. A design that is exclusive to Patek, each droplet is polished by hand and arranged in a staggered cascade formation to produce a beautiful flowing sensation and an insuperable sensation of suppleness for the wearer. Each individual row of links moves to adapt to the contours of your wrist and plays with the light to create a dynamic, ever-changing, organic surface. The correctors for the perpetual calendar displays have been discreetly tucked into the links closest to the case, two on the top (to adjust the month, year and date)  and one on the bottom (to correct the moon phase complication). The bracelet is attached to the wrist with a sleek foldover clasp, which in turn is engraved with the Maison’s hallmark Calatrava Cross. 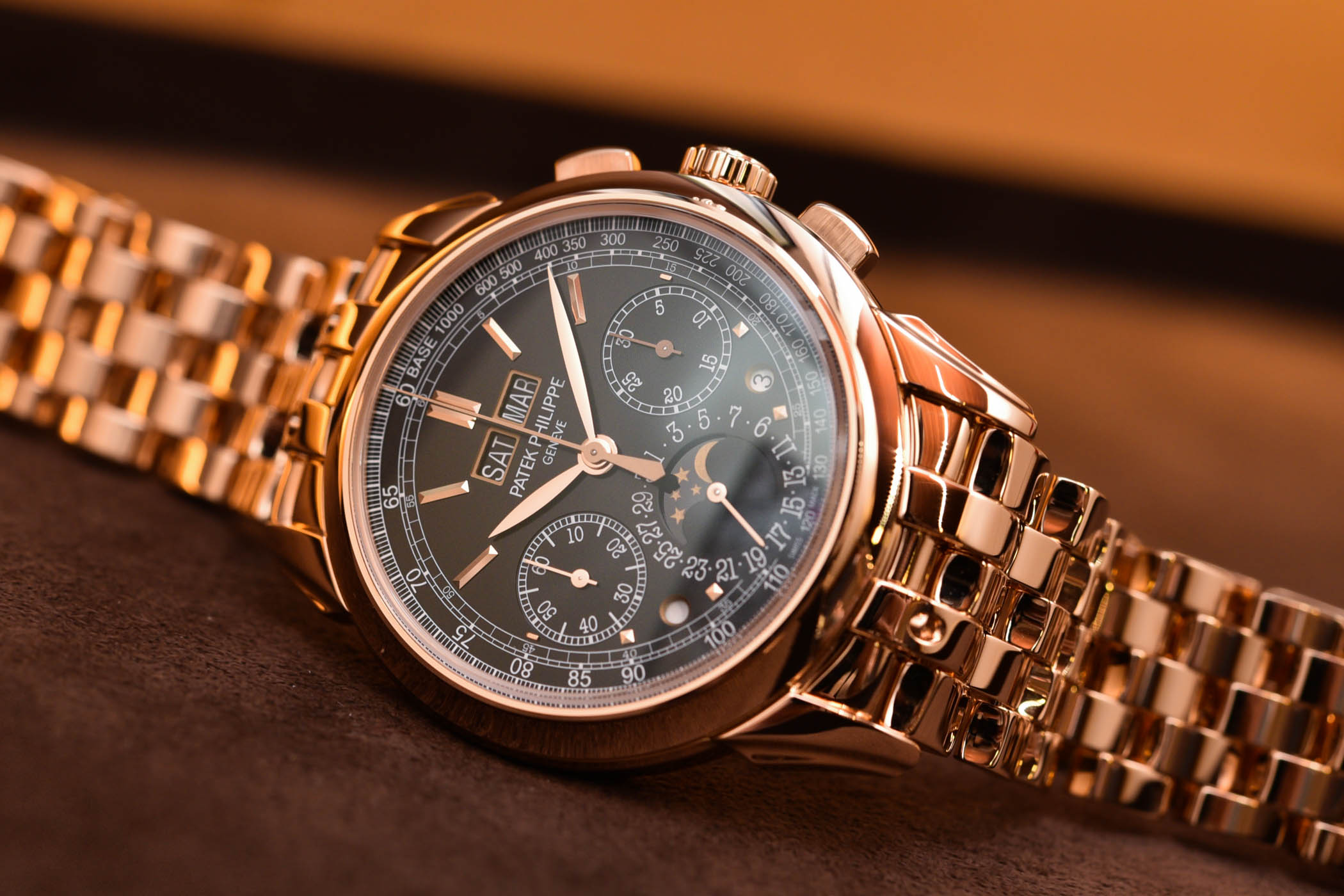 It might not be everybody’s cup of tea, but credit where credit is due. This bracelet is a piece of exquisite jewellery in its own right and harks back to the epoch when many top-tier brands entrusted their bracelets to the acclaimed Geneva-based chain and bracelet maker, Gay Frères. Perusing watch auction sites, we came across a coveted 1948 Ref. 1518 with a luxurious pink gold bracelet that was sold at the Phillips Geneva Watch Auction: One in 2015 for CHF 1,445,000. Described as a “very rare pink gold perpetual calendar chronograph with pink dial, moon phases and heavy Gay Frères bracelet”, the gold bracelet cost almost as much as the watch in its day. 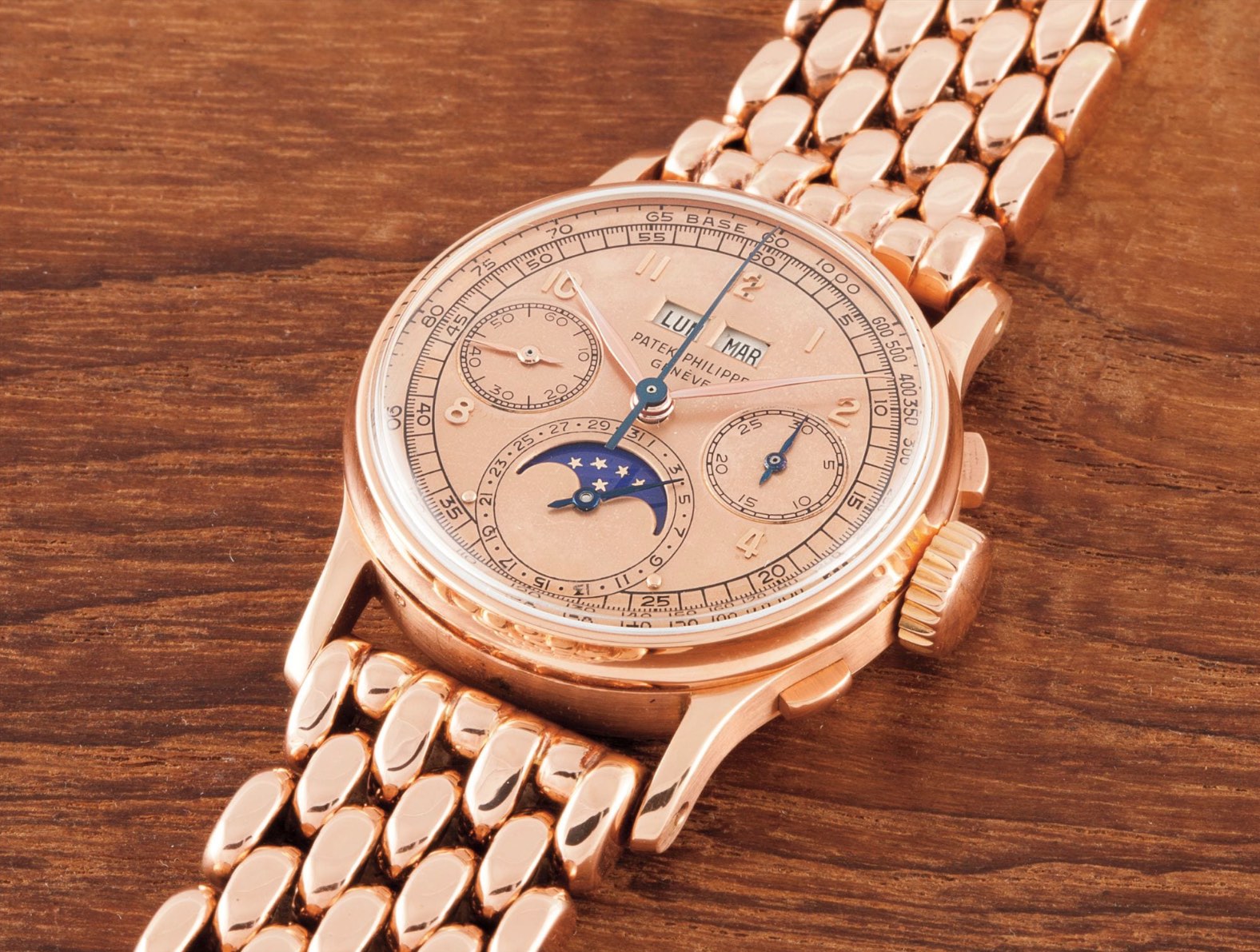 The case and its integrated bracelet form a single impressive body of polished rose gold. Like the bracelet, the 41mm rose gold case displays the same dedication to detail and refinement that defines Patek. Just look at those chronograph pushers with their contrasting polished surfaces and satin-brushed sides, or the beautifully flared lugs that gently curve and taper to meet the bracelet! 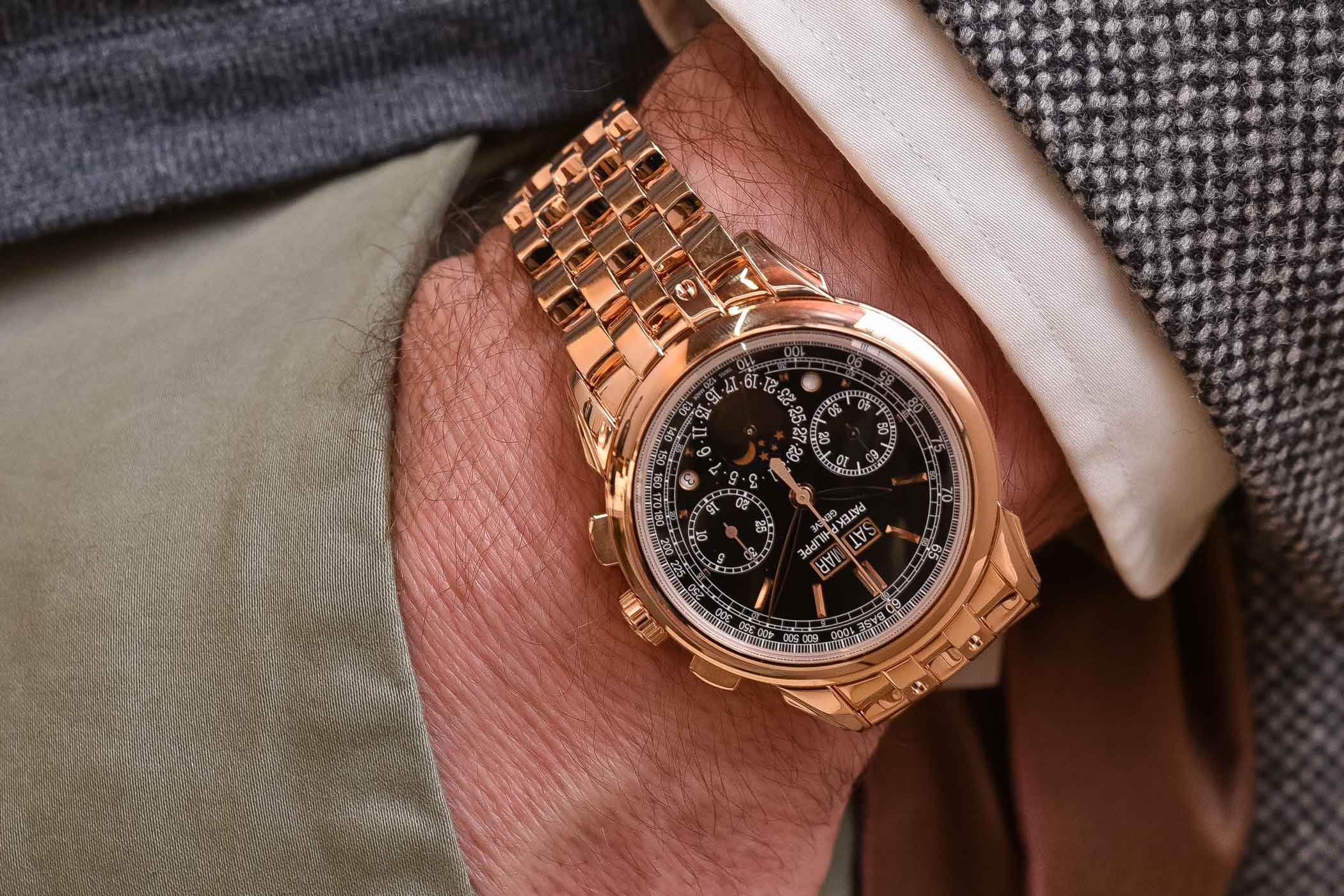 Since its introduction in 2011, the 5270 has undergone a touch of cosmetic surgery including the removal of a double chin and the reincorporation of the tachymeter scale (read here for detailed analysis of the alterations undergone on the dial). The configuration of the dial is identical to the platinum version but, you will admit, looks entirely different. The black sunburst dial seems to exalt and enhance the lustre of the rose gold case and bracelet. However, the symmetry and legibility that has characterised this model for the last 77 years are most definitely in place. 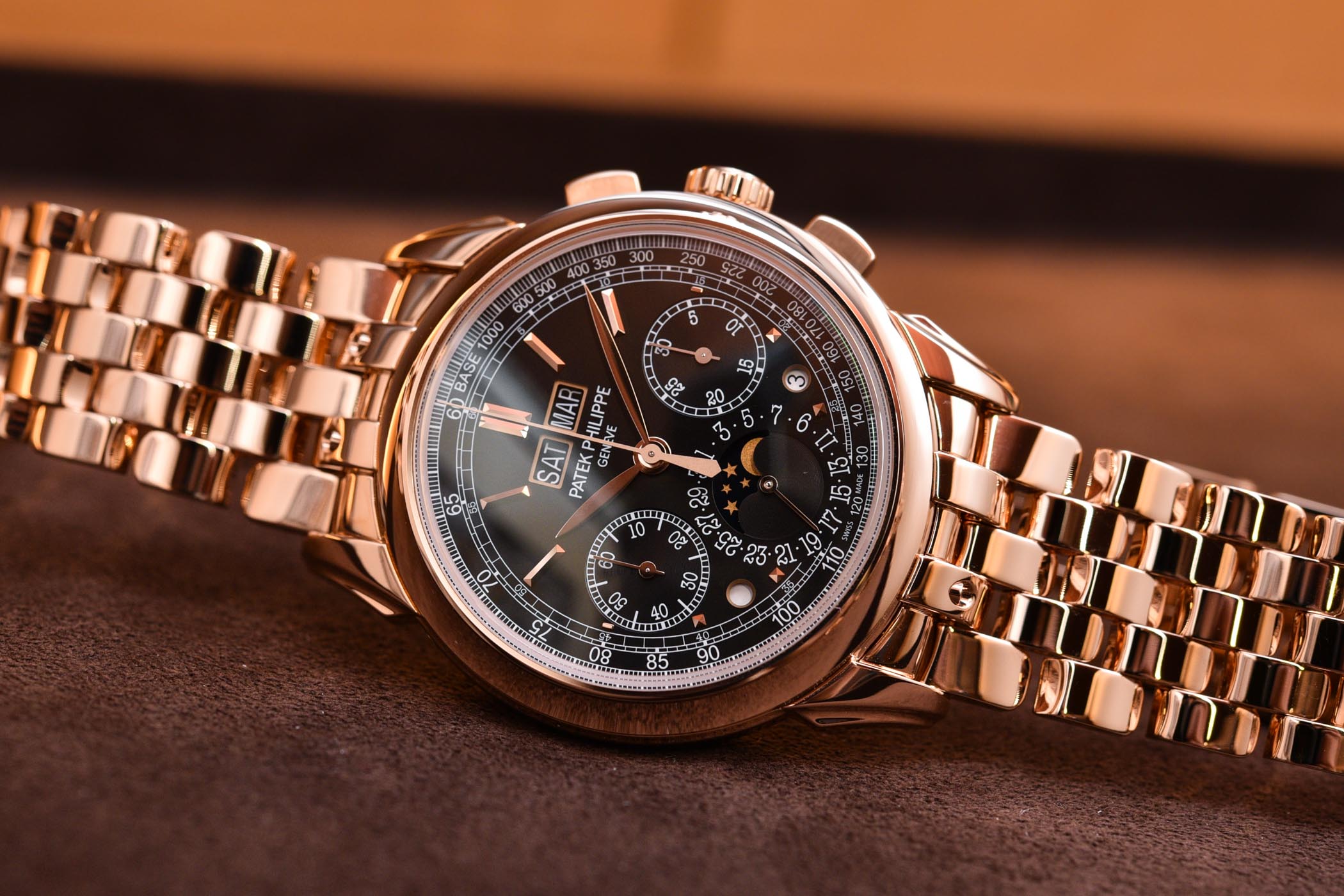 The dramatic contrast afforded by the intense black dial accentuates all the rose gold and golden details on the dial: the gold facetted applied hour markers (the platinum version features Arabic numerals), the golden frame of the double window at 12 o’clock for the day of the week and month, the hands, the golden moon and stars in the moon phase sub-dial and even the leap year and day/night apertures. With the contrasting tachymeter scale, seconds track, chrono counter, small seconds and date with white numerals, legibility is optimum. In yet another measure to enhance legibility, the chronograph hands are sandblasted and the 30-minute chronograph sub-dial and the small seconds are snailed, as is the bosom-shaped aperture for the moon phase indicator. Curiously, the leap year indicator, placed in a circular aperture maintains a white background instead of a black background.

The reference 5270/1R is powered by the manual-winding calibre CH 29-535 PS Q. It combines a perpetual calendar with Patek’s column-wheel chronograph calibre launched in 2009. The chronograph mechanism is connected to the timekeeping gear train by a horizontal clutch and features jumping minutes. Operating at 28,800 vibrations per hour, it can – with the chronograph disengaged – store between 55 to 65 hours of power reserve. The Gyromax balance is paired with a hairspring with a Breguet terminal curve. It comprises no fewer than 456 immaculately finished parts. 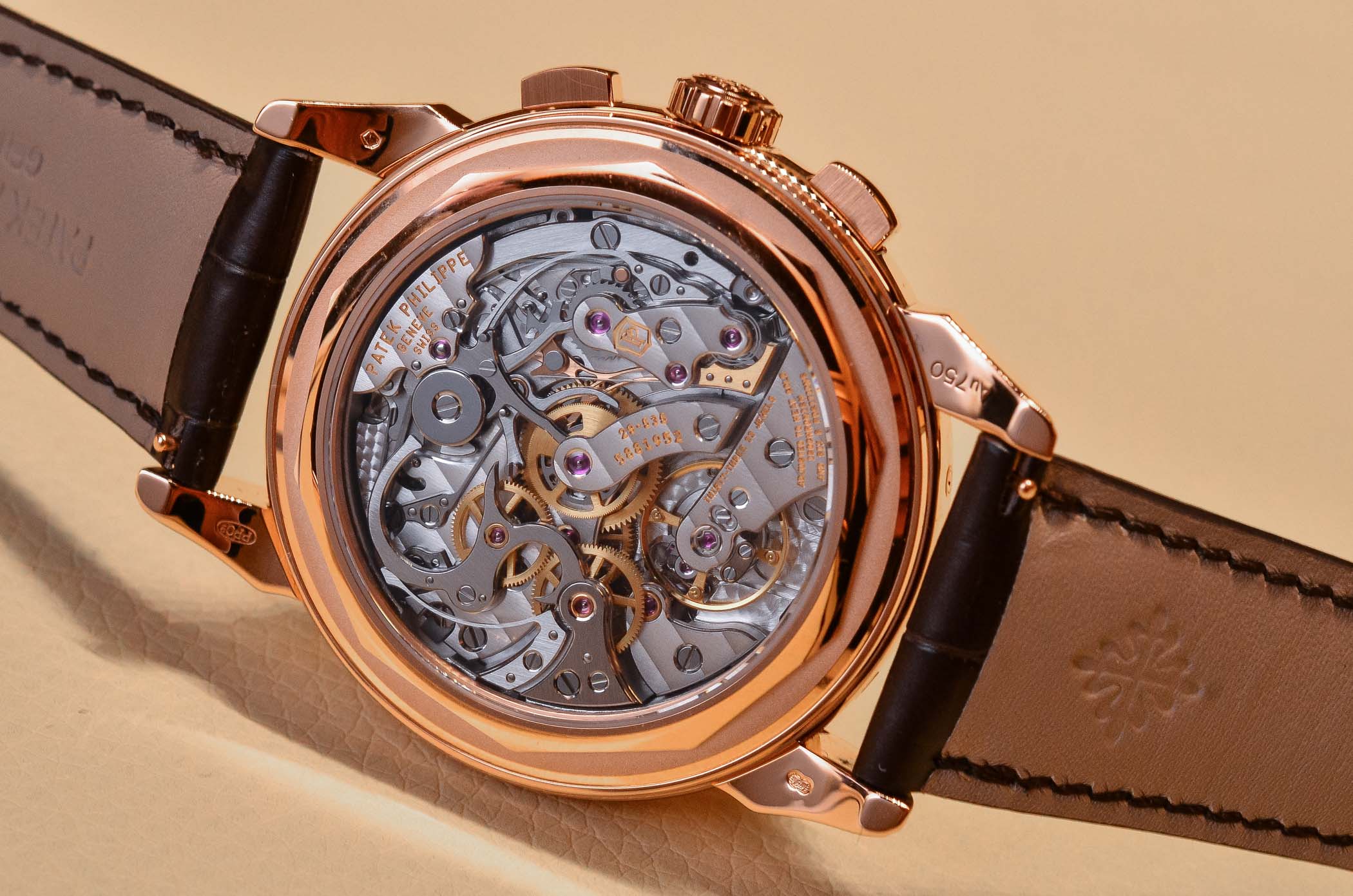 The movement of the 5270, as seen on a strap-mounted model

As with every modern Patek Philippe watch, it is covered by the Patek Philippe Seal, meaning high standards and strict quality control exerted in the manufacturing of every single component of the watch with rigorous standards of form, of function, and of accuracy. A close look allows us to see the polished bevelled angles of the bridges and of the levers, the straight graining of the several elements that compose the chronograph, the polished screw heads and slots, several gold chatons and Geneva stripes that continue from one bridge to another. The beauty of this movement also comes from its pleasantly deep layout, which permits a view of the motion of the gears and levers when the pushers are activated. The watch is delivered with an interchangeable solid back in rose gold and replaces the rose gold predecessor on an alligator strap.

So, if a Patek 5270 is on your wishlist and you have no qualms about showing your gold, this is definitely the model for you. Price EUR 174,900. Please consult www.patek.com for further details.