Oris has been known for several decades as a brand capable of creating great, robust watches at fair prices. No doubt on that. More recently, the brand also managed to infuse coolness to some of its creations, replacing the rugged and functional aspect of some pieces (think about the Aquis) with a nice dosage of charm and vintage inspiration. This move has drastically improved the brand’s visibility and attractivity, thanks to two models; the Big Crown Pointer Date on one side, the Divers Sixty-Five on the other. The latter, launched in 2015, has since been launched in multiple versions, playing on colours and materials. Latest addition to the collection, the Divers Sixty-Five “Sunset” Edition, mixing rich hues for its dial and bronze details for the case and bracelet.

For years, Oris focused its production mostly on instrumental, functional and ultra-robust sports watches. Nothing wrong with that, but this bias also implied that the brand was appealing to a fraction of the watch enthusiasts, those looking for large and rugged tool watches. Things drastically changed in 2015, with the launch of the Divers Sixty-Five, a watch that gave the brand great visibility when introduced and opened now horizon. Still robust, well-built and fairly priced, but now far more desirable and charming. The idea with this watch was to bring back a practically unknown design from Oris’ past. The watch in question was launched in 1965 and featured a 36mm chromium-plated brass case with a domed plexiglass, a bi-directional rotating bezel painted in black and a highly original dial design, with trapezoidal hour markers. It was water-resistant to 100m and featured a date window. 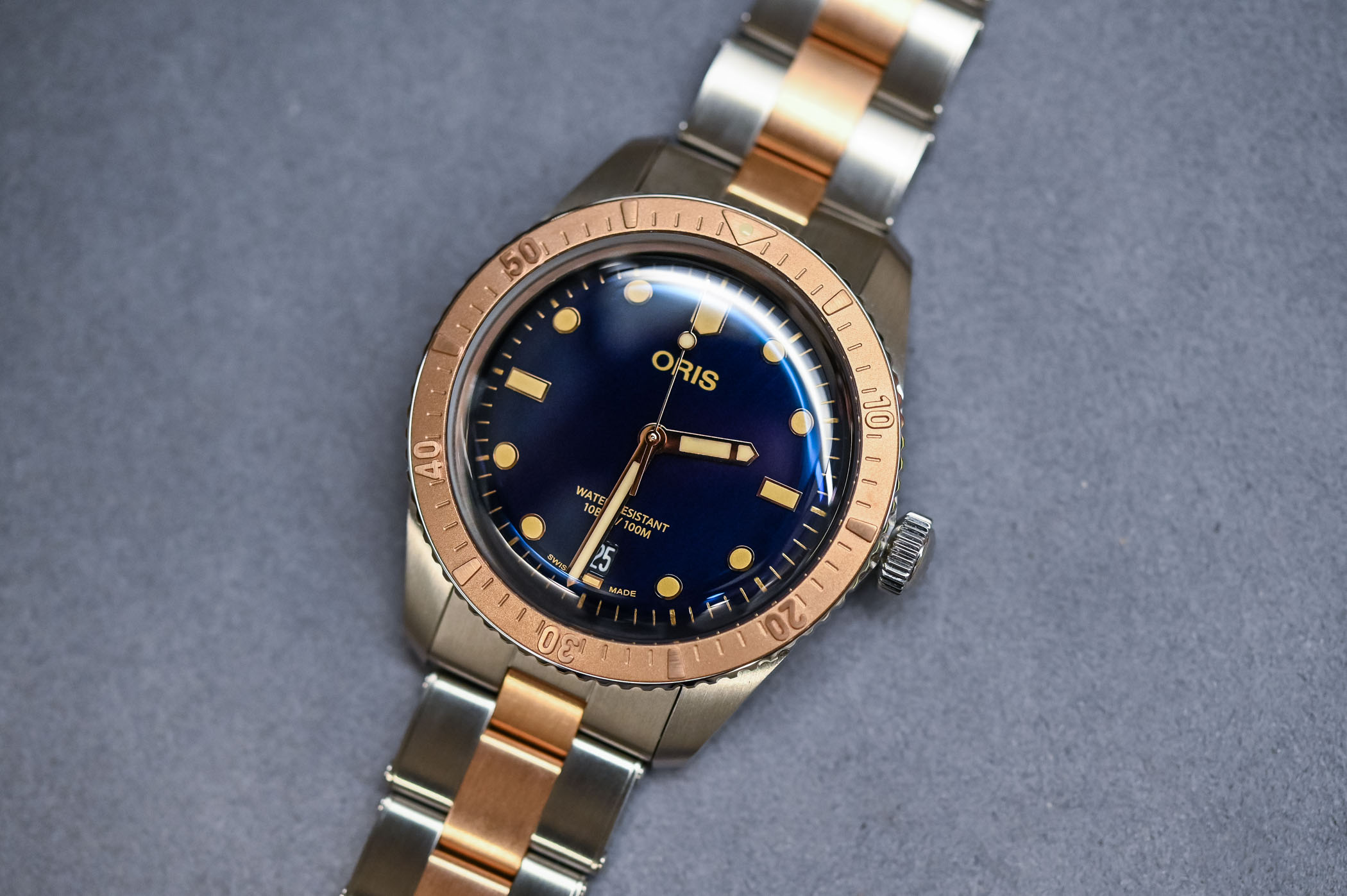 The first edition of the Oris Divers Sixty-Five was directly inspired by this watch, with the same overall design and shape, of course, modernized in size (40mm) and materials (steel and sapphire crystal). The immediate reactions were very positive and what was first a stand-alone model quickly became an entire collection. In addition to regular colour updates, the brand also launched new dial designs (with classic applied dots) and a larger 42mm edition. In addition to the time-and-date versions, the brand launched a chronograph edition too. Finally, this vintage design was also the occasion for the brand to play with materials. First with the full bronze Carl Brashear Limited Edition and then with steel-and-bronze models in the permanent collection. Finally, a full two-tone watch came recently, with a bracelet made in steel and bronze.

While you’d expect a dive watch to be mostly available in dark colours, like black or blue, the Sixty-Five has been a proper playground for Oris, which experiences here with different, more original tones and materials. The new Sunset edition is exactly that. Less of a dive instrument, more a daily sports watch with lifestyle feel, it remains nevertheless cool and robust enough. 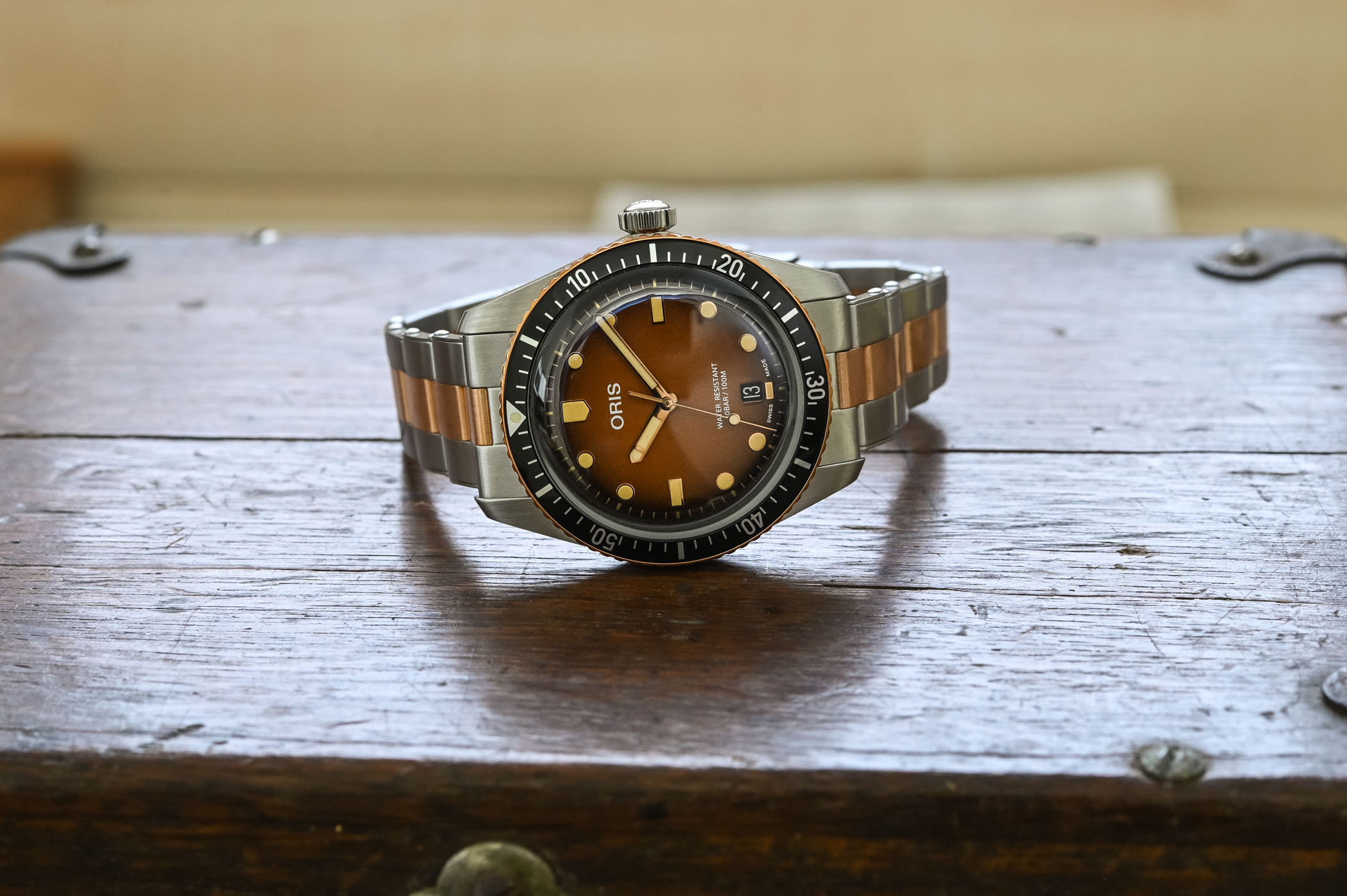 What truly sets this edition apart from the rest of the Divers Sixty-Five is its dial. Warm and unusual, it is described by the brand as a “never-ending Mediterranean sunset.” While we could agree, we’ll be less poetical in our description – even though, the dial is quite striking and attractive. The colour is a warm, rich golden-brown, almost orange in the centre, with a typical gradient effect making the dial darker on the periphery. Reinforcing this vintagey, warm feeling, the dial features applied indexes and hands coated in gold with old-radium Super-LumiNova – all of these elements giving the idea of a faded, patinated vintage gilt dial. The dial remains legible and well contrasted, offering a large amount of luminous material. Finally, the watch is topped by an ultra-domed sapphire crystal, offering nice reflections and distortions, almost like a vintage plexiglass crystal. 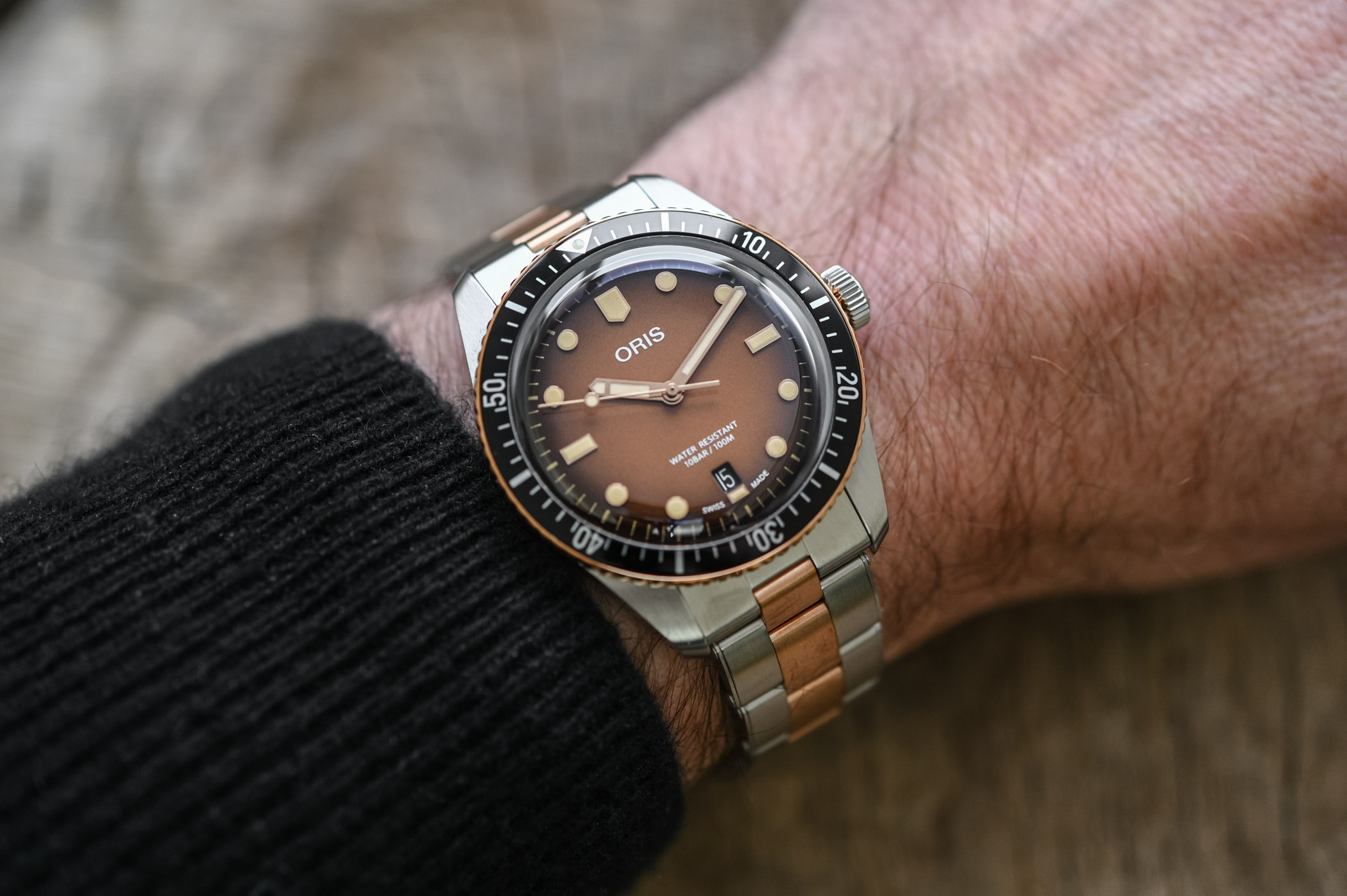 For this edition, Oris chose to remain as old-school as possible and thus went for the smaller case, measuring “only” 40mm in diameter – a fairly reasonable size considering the average diver’s watch. The height is also fairly controlled, at 12mm – plus, the case itself is beautifully proportioned, with thin casebands. Mostly brushed, with polished sides, it has a typical “early dive watch” design, with unprotected crown and thin black aluminium insert for the uni-directional bezel. The crown is oversized and easy to operate.

To complement the rich colour of the dial, the Oris Divers Sixty-Five “Sunset” has a stainless steel case adorned with bronze elements. For instance, the bezel is made in this golden-like material and, when this option is chosen, the bracelet is also made in this combination of steel and bronze. Closed by a folding clasp in steel, it is also very nicely designed, with a riveted profile, reminiscent of what was used on 1960s dive watches. The bracelet is thin and tapers, offering great comfort. A brown leather strap is also available, yet the steel-and-bronze bracelet gives the final touch of coolness to this watch. Under the screwed caseback is a well-known movement, the automatic calibre Oris 733, basically a Sellita SW 200-1. Operating at a 4Hz frequency and boasting 38h of power reserve, it is a reliable and easily serviceable engine. Note that the Oris Divers Sixty-Five is more to be considered a sports watch than a proper diver’s instrument as, despite its screw-down crown, its case is only water-resistant to 100m – which will be more than sufficient for 99% of the potential owners. The Oris Divers Sixty-Five “Sunset” Edition Steel-and-Bronze is part of the permanent collection and is now available from retailers and at Oris online boutique. It is priced at EUR 2,100 or CHF 2,200. More details at oris.ch.