Since 2012, NOMOS has collaborated with the German affiliate of Doctors Without Borders (Ärzte Ohne Grenzen), an independent, global medical program that provides emergency services around the world. More than 8,000 special edition watches to date have raised over a million euro for the organization and two Ahoi models are the brand’s latest offerings. The model on hand today is a 36mm Ahoi Neomatik special edition (time only), but there’s also a larger Ahoi Datum with a 40mm case and date at 6 o’clock. Each is limited to 250 watches and donates EUR 250 to Doctors Without Borders. 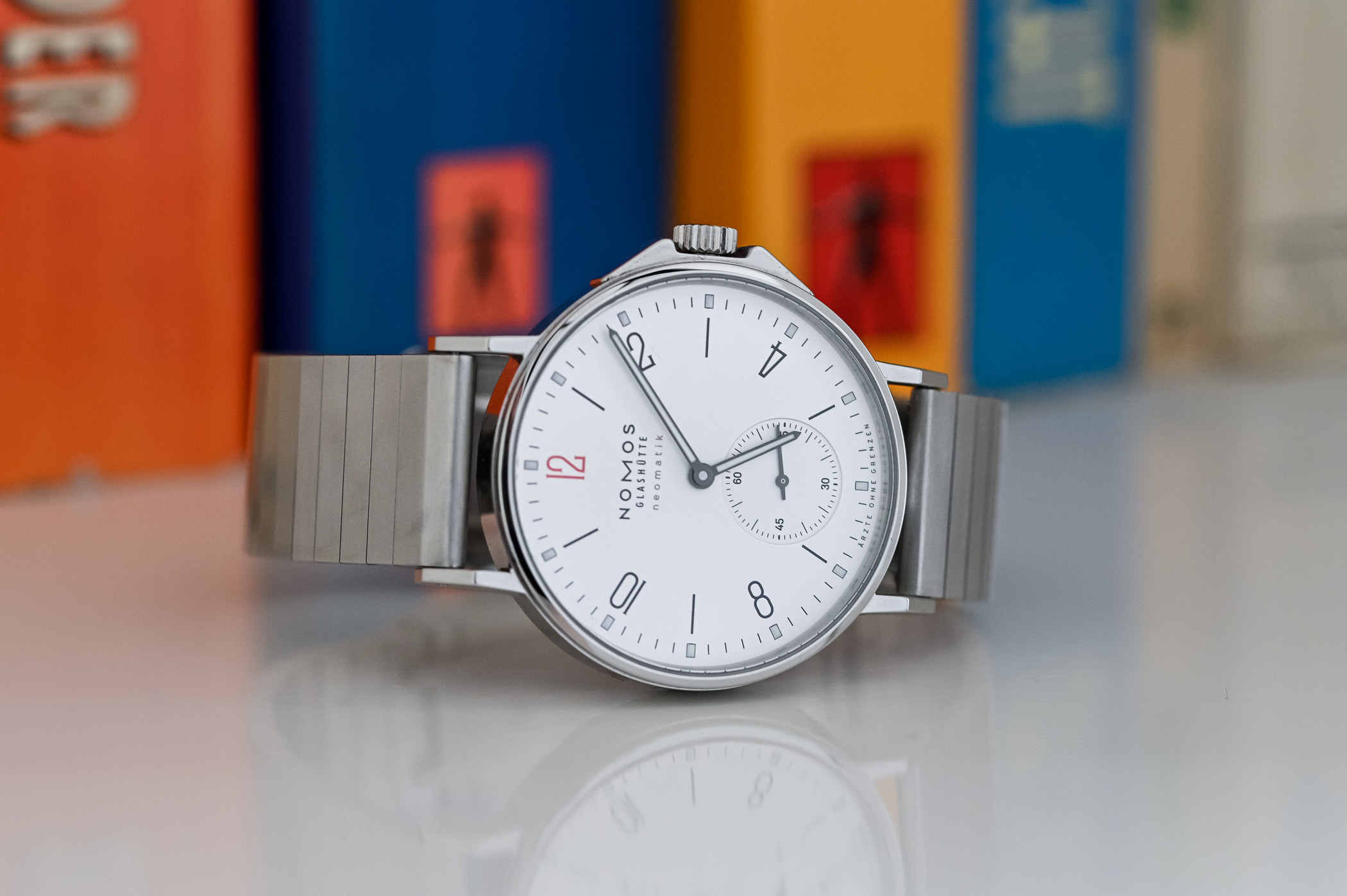 Founded in Paris in 1971, Doctors Without Borders (Médecins Sans Frontières in French) was started by a small team of doctors and journalists and is today a Nobel Prize-winning organization. Emergency aid is provided to approximately 70 countries around the world for natural disasters, wars, disease, malnutrition and access to medications/vaccinations. Its first mission was to help thousands in the Nicaraguan capital, Managua, following a devastating earthquake in 1972. For almost a decade, the initiative was generally overwhelmed by a lack of organization with bands of “guerilla doctors” working without adequate support. Since 1980, more than 30,000 employees in 28 countries have transformed Doctors Without Borders into a global success, funded by donations like those from the NOMOS special edition watches. 85 percent of funds go directly to medical programs, while the rest supports fundraising and general management. 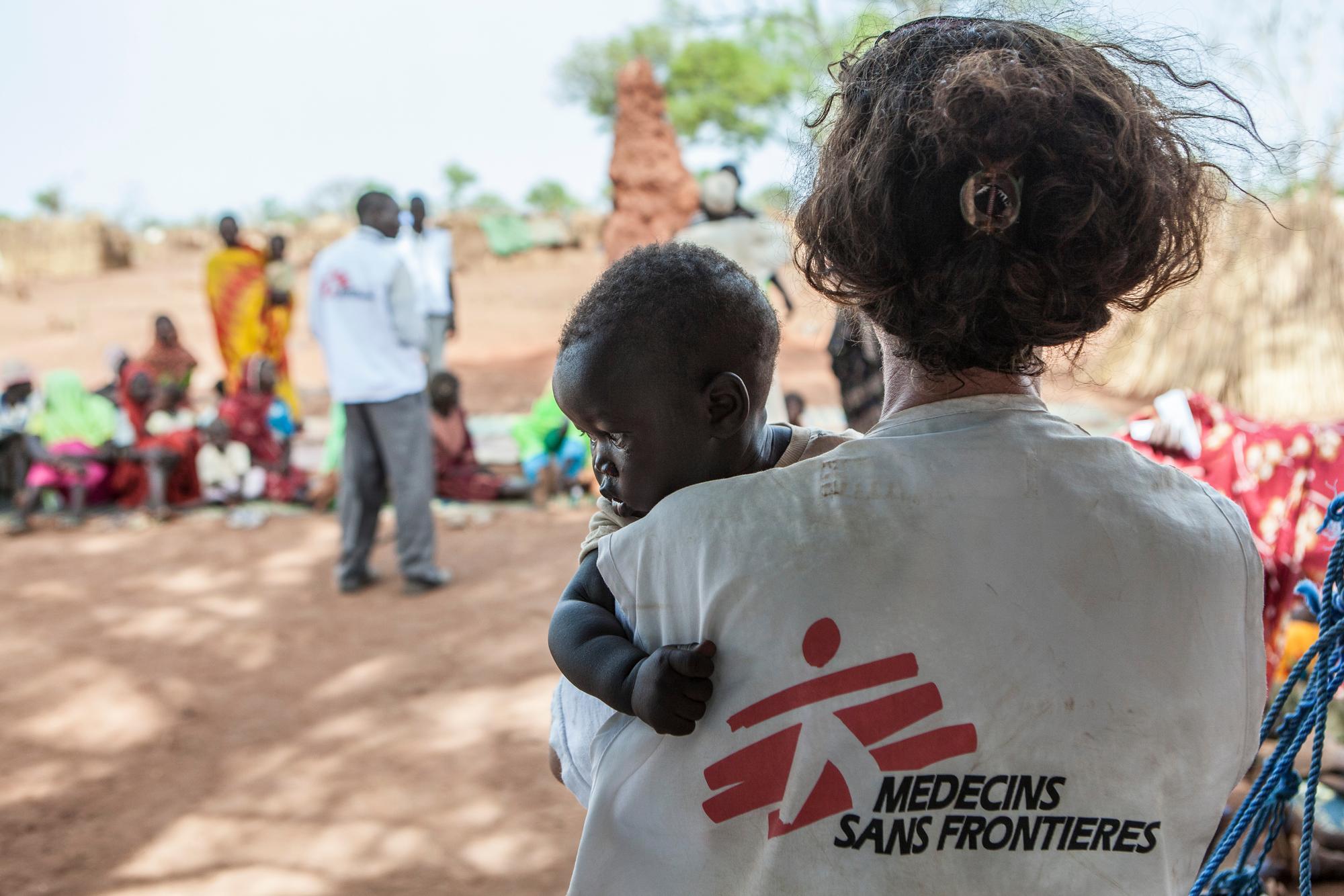 NOMOS itself is a relatively young company of only 30 years, founded in 1990 in Glashütte, Germany. Various models have been used for the Doctors Without Borders editions, differentiated by a red numeral at 12 o’clock and Doctors Without Borders (or Ärzte Ohne Grenzen) replacing “Made in Germany” at the bottom of the dial. The brand has been producing its own movements since 2005, so all Doctors Without Borders editions have had in-house calibres, but a switch from hand-wound to automatic movements happened last year (although the Tangomat had an automatic back in 2005, so it’s not new to the overall portfolio). The price difference between these models and their standard counterparts is surprisingly negligible as the pricier bracelet mostly offsets the EUR 250 donation.

As mentioned above, we have the smaller 36mm Ahoi Neomatik variant that’s specifically 36.3mm in diameter and 9.6mm in height – the larger Ahoi Datum is 40.3mm x 10.6mm. The stainless steel case is classic NOMOS with a minimalistic round aesthetic, narrow angled lugs and a very narrow bezel. Like all Ahoi models, this one features a crown guard and screw-down crown, providing a sporty vibe and water resistance of 200 metres. Yes, it may support a global medical initiative, but you can still dive with it. The dial is protected by a sapphire crystal with a sapphire exhibition caseback secured with six screws. “Sondermodell Ahoi für Ärzte Ohne Grenzen Deutschland” is engraved on the back along with 1/250. 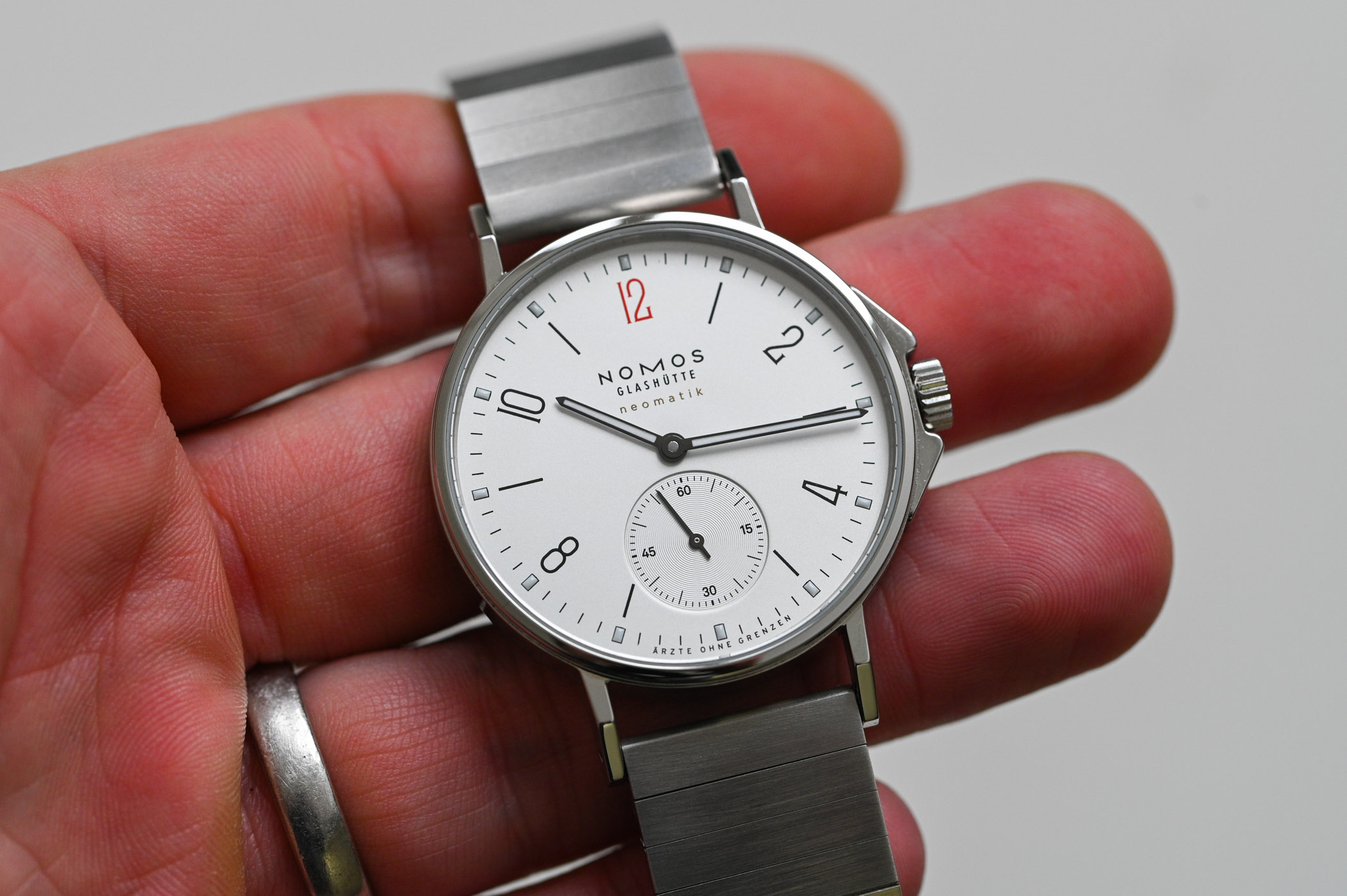 36mm is definitely on the smaller side by today’s standards, but is also light and comfortable and kind of disappears on the wrist. The 40mm Ahoi Datum will likely be favoured by men, particularly ones with larger wrists. Both special editions are fitted with the new sport steel bracelet, an option for other models at an additional cost, and has a smooth appearance with flat horizontal links secured with screws. It also features the always appreciated quick-release levers. 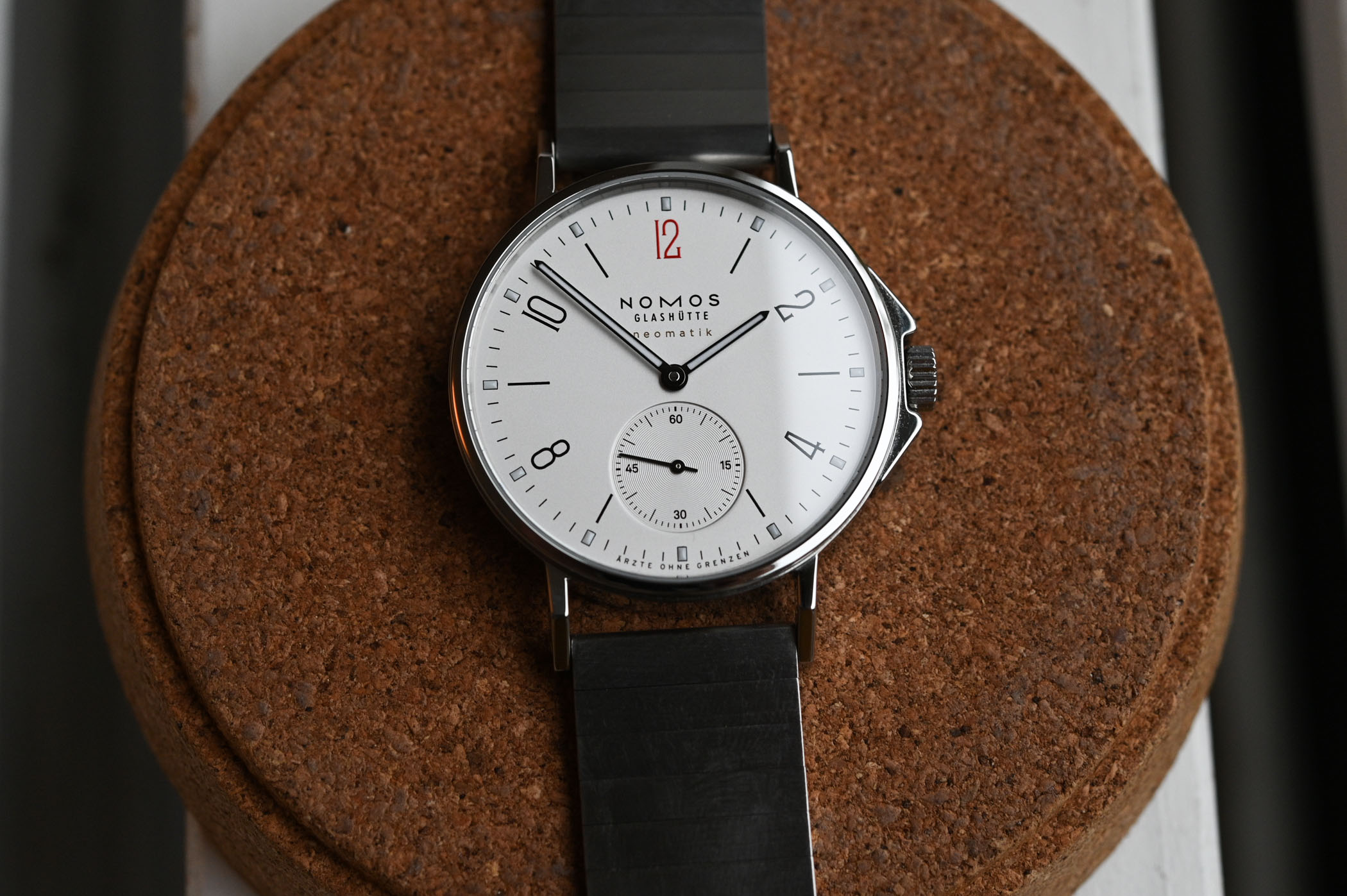 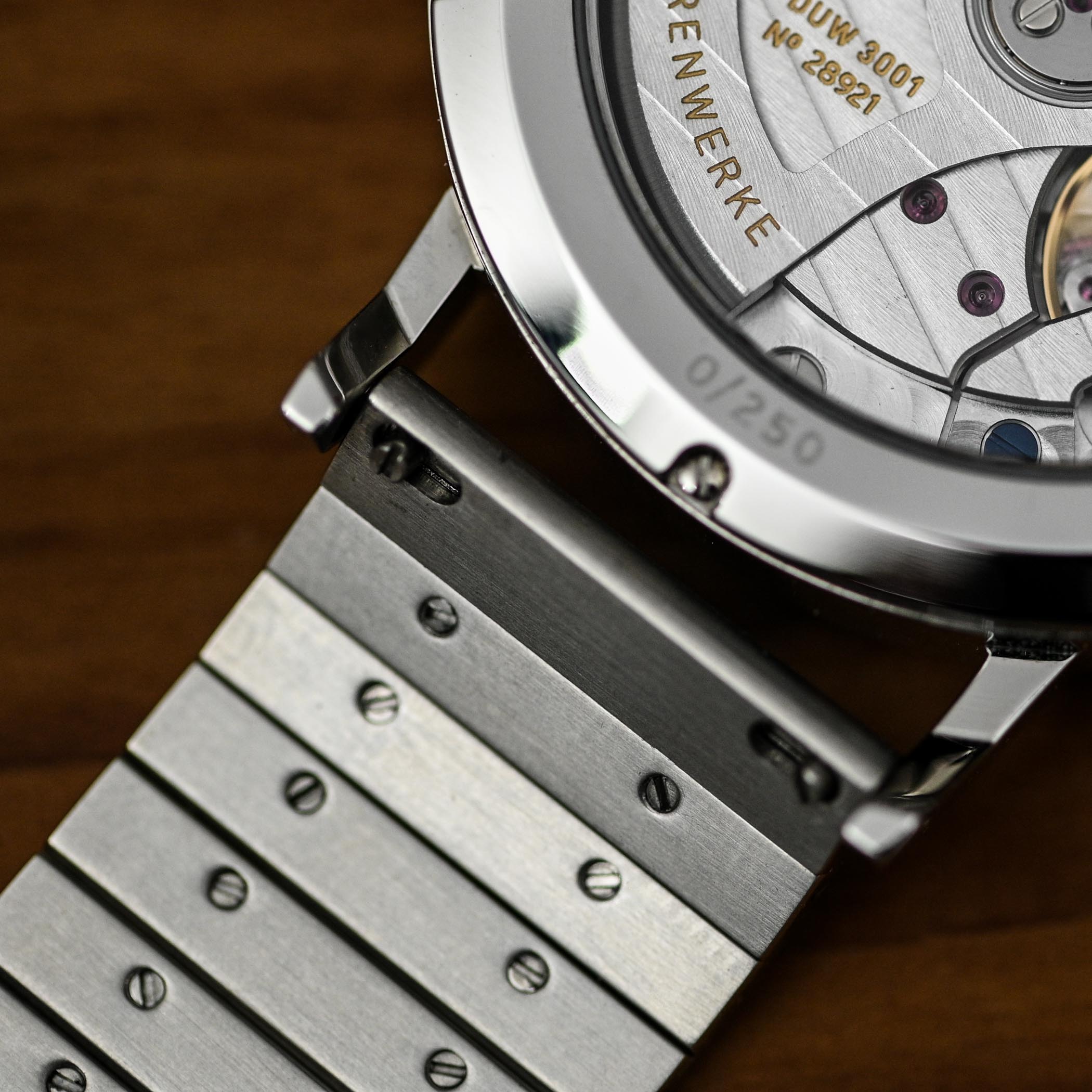 The galvanized, white silver-plated dial continues the crisp, minimalistic vibe, and although similar to the standard model, there are specific differences. A monochromatic theme replaces colour, such as light blue Super-LumiNova inserts on the hour and minute hands, and bright orange seconds hand on the standard dial. The special edition has black hour and minute hands with white Super-LumiNova, a black seconds hand and light tan “Neomatik” printed on the dial (compared to bolder orange print). The only sharp colour is the Arabic numeral at 12 o’clock, which is traditional for Doctors Without Borders editions. 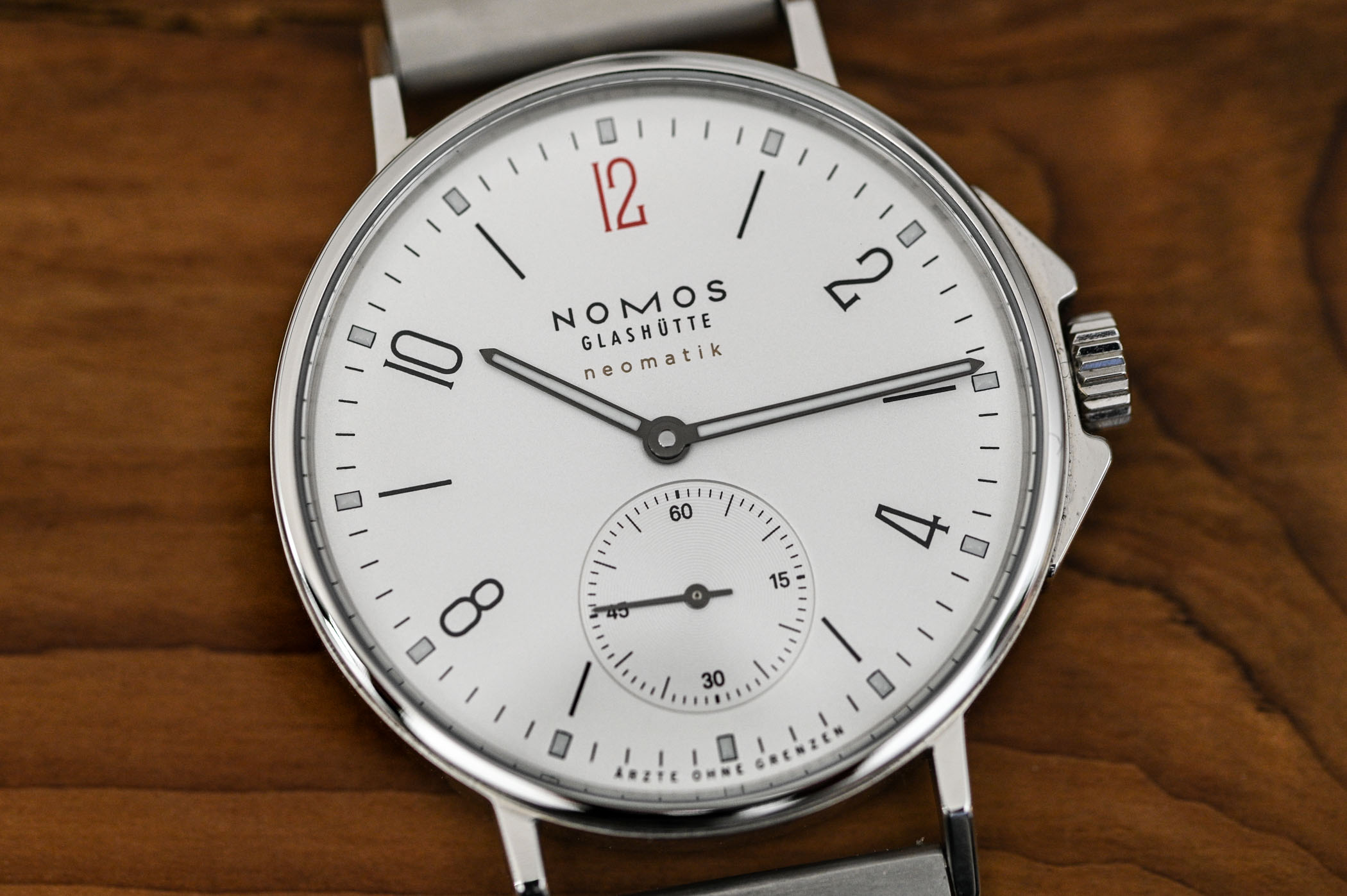 The remaining black Arabic numerals are narrow, modern and angled, and as with most NOMOS dials, the odd numerals are replaced with simple lines. Small squares of white Super-LumiNova are placed every hour on the perimeter track. The seconds sub-dial at 6 o’clock has a subtle snailed pa[ern and no lume. I personally prefer this crisper dial to the more colourful ones and also find it more legible. 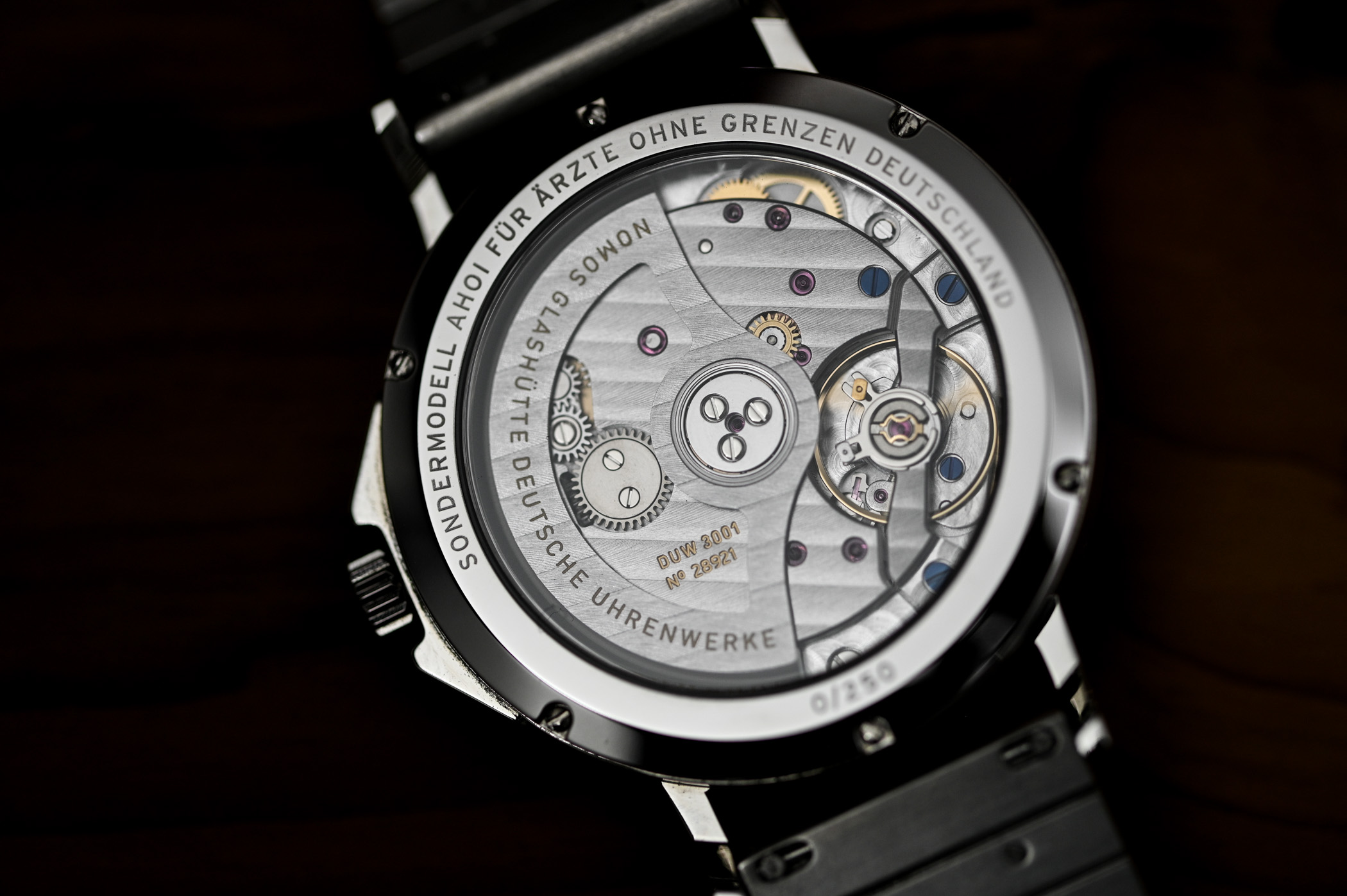 The 36mm Ahoi Neomatik has the in-house DUW 3001 automatic calibre, which differs a bit from the DUW 5101 in the larger Ahoi Datum – the main difference is the date at 6 o’clock. The 3001 has 27 jewels, beats at 21,600vph (3Hz) with a 43-hour power reserve. It features the brand’s Swing System, an in-house escapement developed in 2014, and is adjusted in six positions for a chronometer level of accuracy. Seen from the exhibition caseback, it’s well finished with thermally blued screws, an open-worked rotor, Côtes de Genève and perlage. For those curious, DUW is actually an acronym from the brand’s full name – NOMOS Glashütte Deutsche UhrenWerke.

NOMOS has a very consistent aesthetic that’s instantly recognizable and generally unchanged since its first models in 1992. Inspired by streamlined Bauhaus watches from the 1930s, the modern and minimalistic aesthetic has always appealed to me, but I don’t always like the colourful accents. My favourite models have often been the Doctors Without Borders editions, as I prefer the monochromatic palette, signature red 12 and, of course, the contribution to an amazing global initiative. The 36mm Ahoi Neomatik doesn’t disappoint, but I’d probably go with the Ahoi Datum variant for the larger 40mm diameter. Your mileage may vary. Both models represent the best of NOMOS with a great in-house calibre featuring the Swing System escapement. Comparable watches from other Glashütte brands are certainly more expensive and let’s not forget that NOMOS is an independent company to boot. 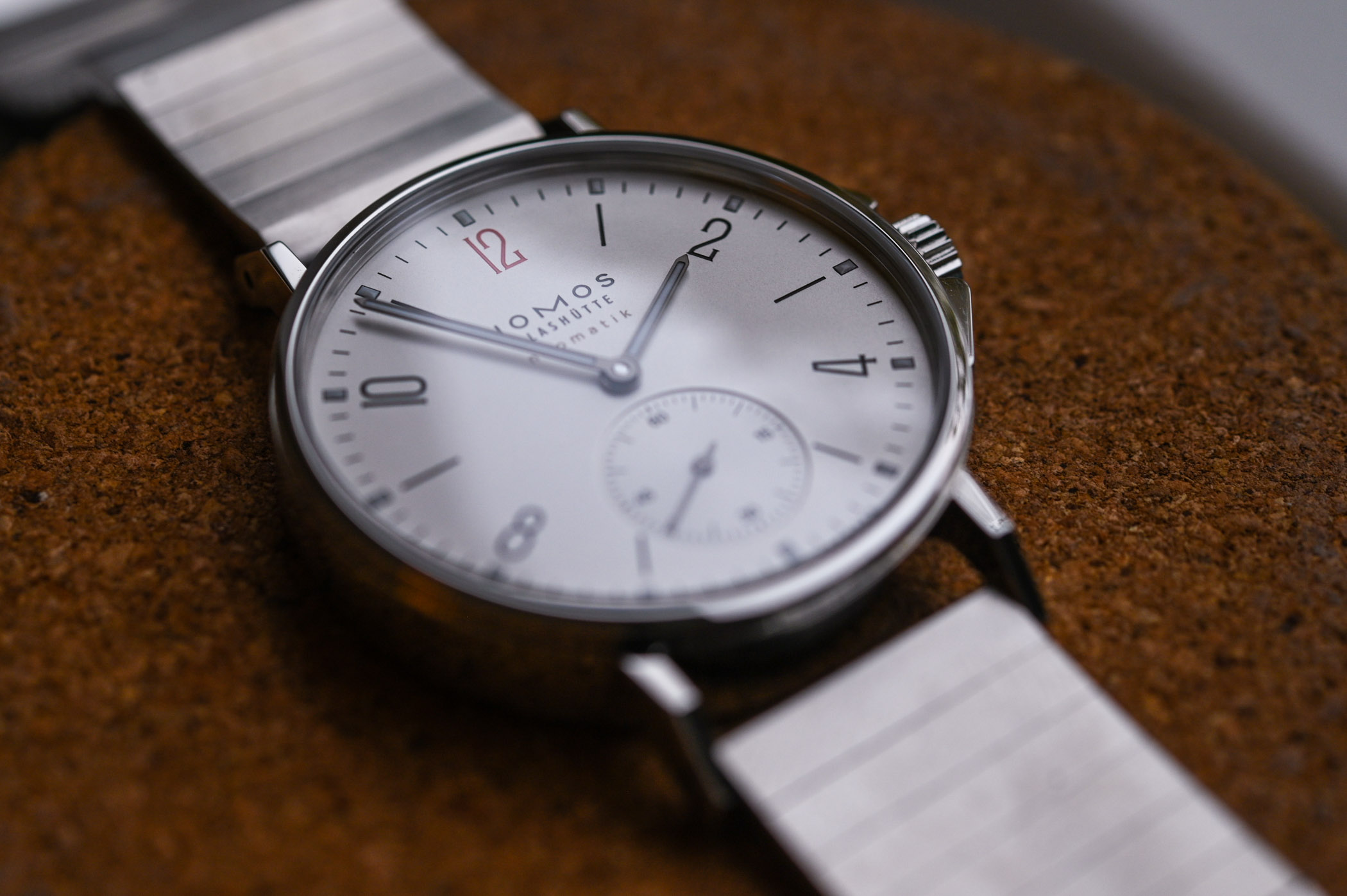 The present Nomos Ahoi Neomatik “Doctors Without Borders” 36mm retails for EUR 3,440, including the sport steel bracelet. As such, it makes a lot of watch for the money. This edition, as well as its larger counterpart, is limited to 250 pieces and is now available at Nomos’ website here.