Somewhere in between the bold Bauhaus interpretation of the Regulator with Alain Silberstein and the more classic regulator configuration in the brand’s Excellence collection lies this collaboration with Eric Giroud. First presented at Baselworld 2019 – and the first collaboration piece with an external designer – Eric Giroud’s redesigned Excellence Regulator marks a new direction for the brand. By embracing a classic regulator layout and placing it in the hands of a contemporary designer, Louis Erard proves that what’s old can be new again. 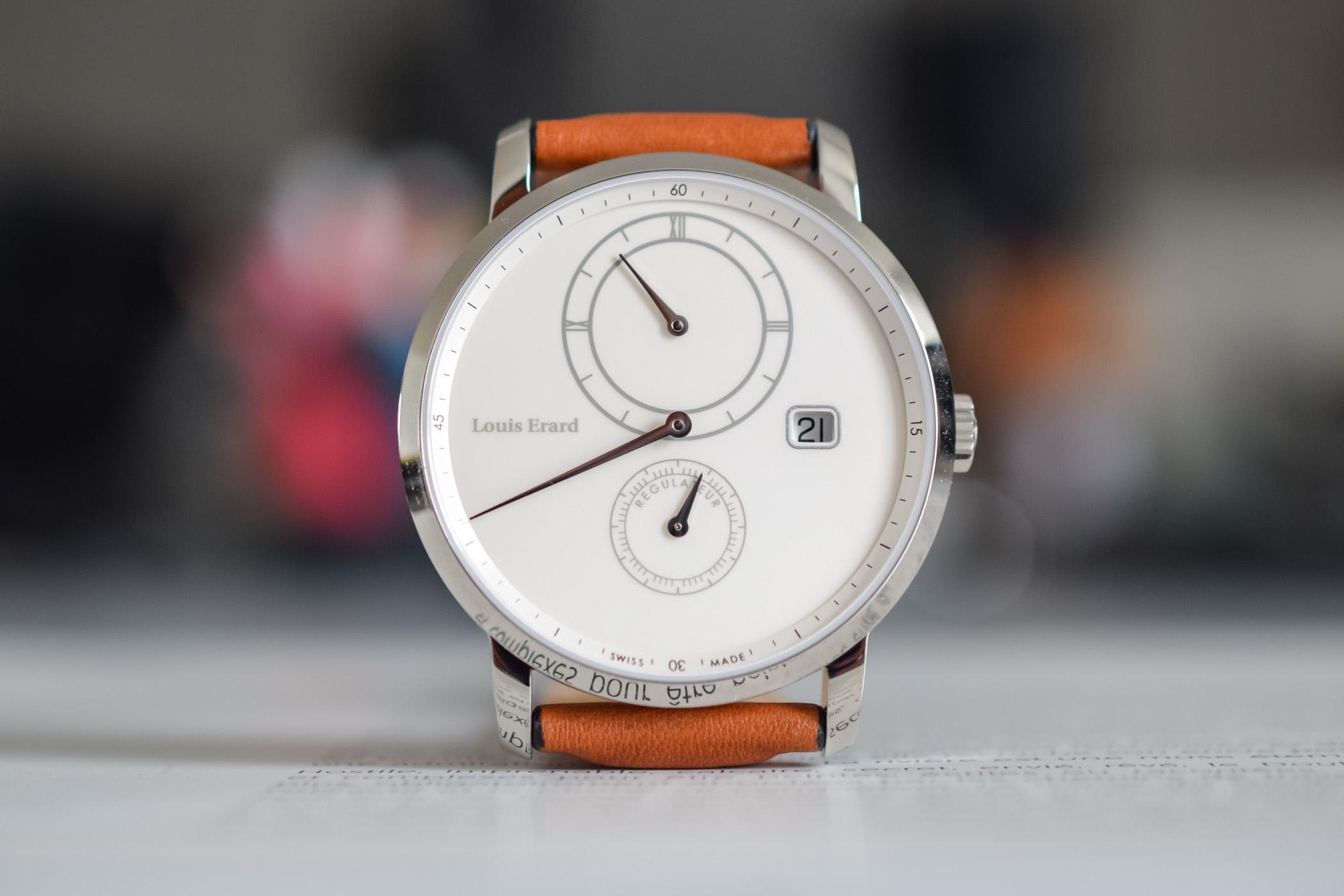 Eric Giroud is a multi-faceted designer. From his initial architecture studio to graphic design, packaging and product design, Giroud got a taste for watches in 1997 and has never looked back. Architecture has always played a prominent role in his designs. “To be an architect,” says Giroud, “is to befriend constraints“. And if there is one domain where constraints are the norm, it is watchmaking. From MB&F to the Harry Winston Opus 9 edition, from Vacheron Constantin to Manufacture Royale, Giroud’s designs are well-known in the watchmaking world and his career is dotted with multiple awards, including his latest collaboration with MB&F which secured the prize for the Ladies’ Complication at GPHG 2019.

Louis Erard is currently working on renewing itself and the first chapter of this strategy is this minimalistic take on the regulator.

Louis Erard was originally founded in 1929 and its first watch produced in 1931. In 2003, the name was bought by Swiss investors and the brand relocated from La Chaux-de-Fonds to Le Noirmont, in the Jura. The idea was to produce refined watches with affordable prices and Louis Erard developed its first in-house module with Soprod in 2009. With a portfolio of simple 3-hand dress watches to chronographs and skeletonised models, Louis Erard decided to reach out to contemporary artist Alain Silberstein and watch designer Eric Giroud to inject new life into its iconic Excellence Regulator. 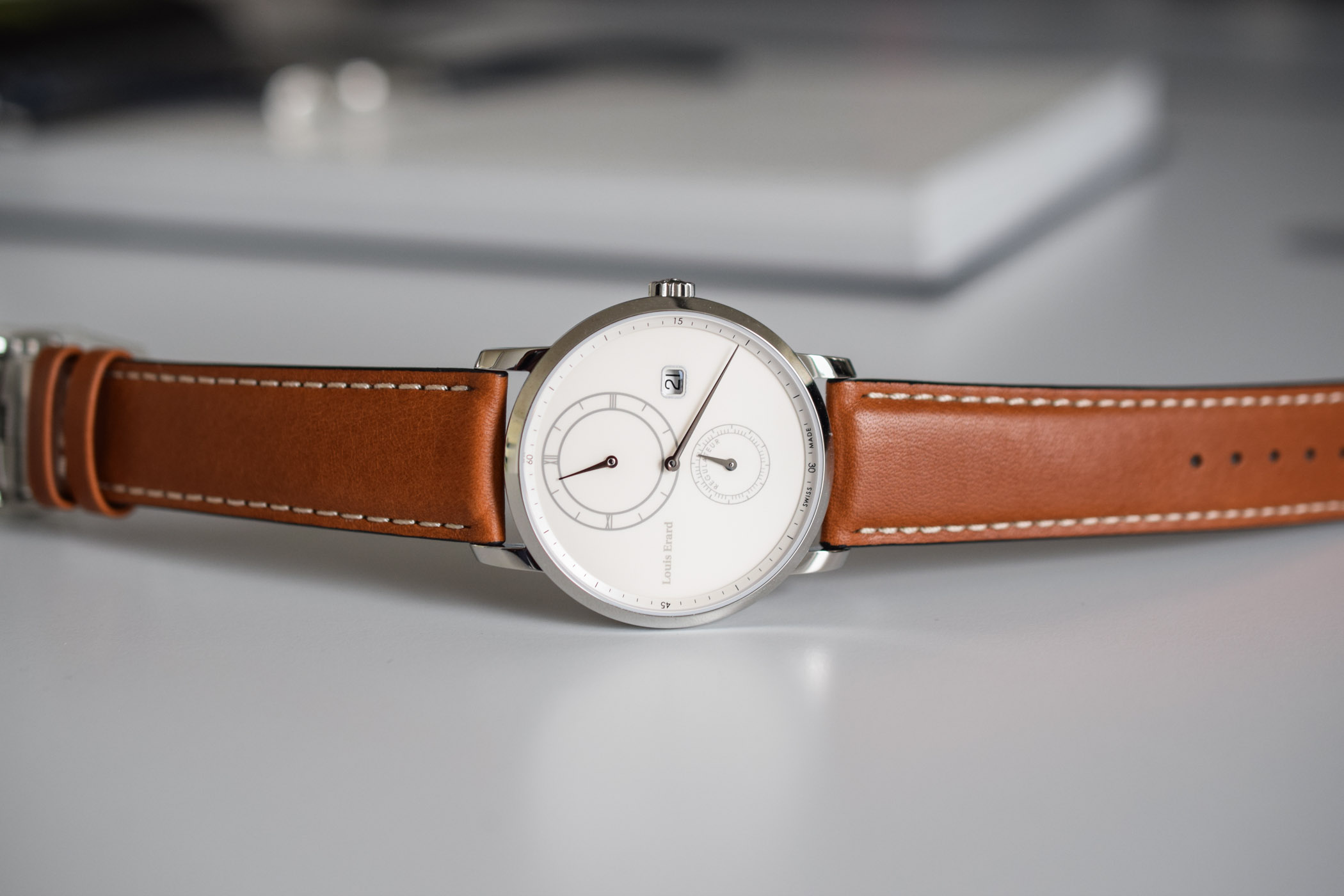 Taking the Regulator display into the 21st century

To date, there are three Regulator models in the Excellence collection with radically different personalities:  the original classic interpretation with Roman numerals and blued hands; the artistic Alain Silberstein Regulator with playful squiggly hands and primary colours; and this decidedly contemporary and minimalist collaboration with designer Eric Giroud. 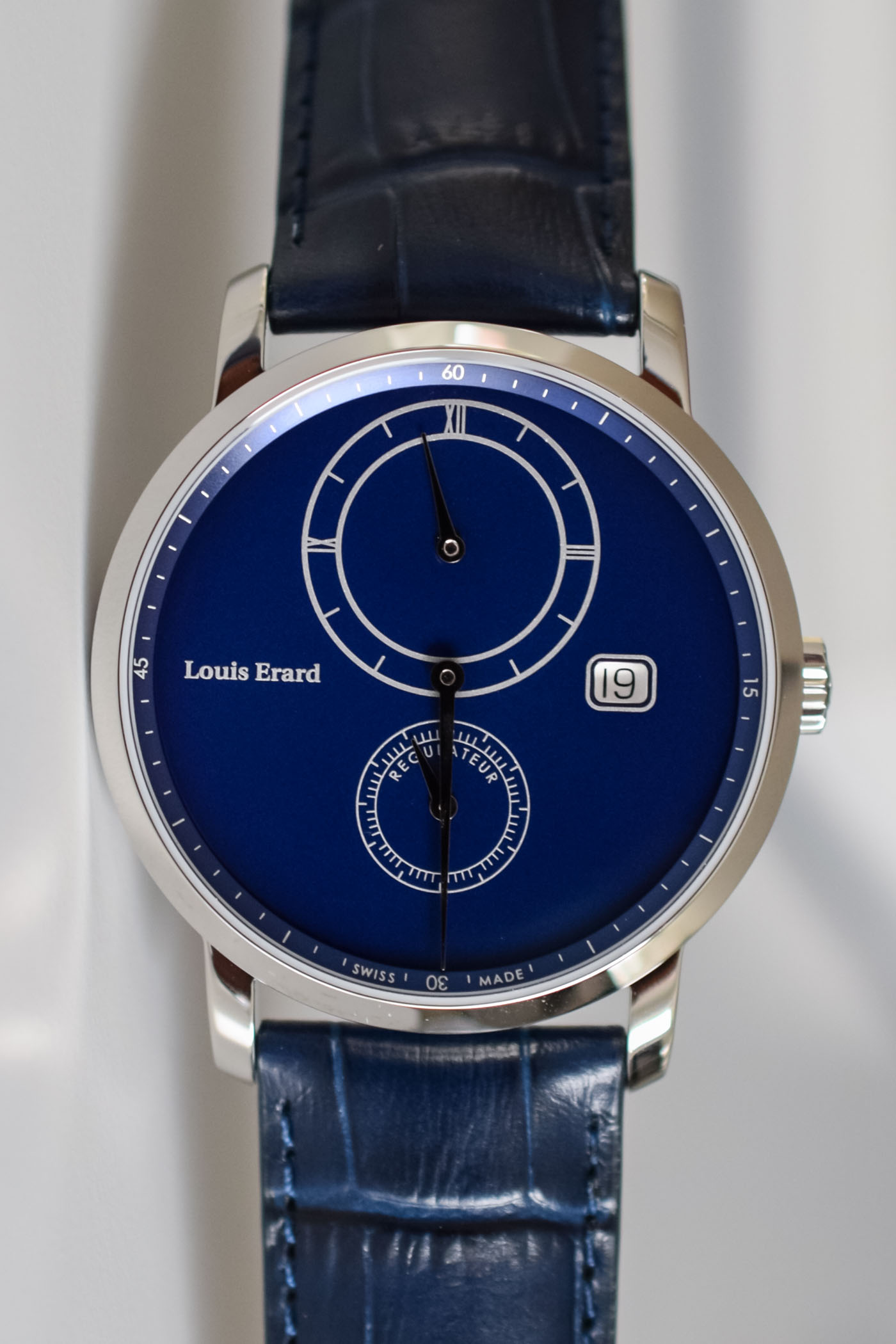 Although regulator clocks gradually faded into disuse, they were originally developed in the mid-18th century as master clocks to offer the most accurate time available at that time (sorry about that). The distinctive feature of regulators was the separation of minutes, hours and seconds. The minutes became the true protagonists of the dial read with a large sweep hand, while the hours and seconds were usually relegated to smaller sub-dials, with all three hands working off different mechanisms. The appealing layout of regulator clocks, with the prominent minutes track and two sub-dials for the secondary function of the hours and running seconds, is inching its way back into watchmaking of late. Chronoswiss has made regulator-style dials its brand speciality and even heavyweights like Patek Philippe have paid tribute to the style. The first impression Eric Giroud’s Regulator is one of sobriety and elegance with a beguiling dose of ‘now’. Visited in three iterations, the case measures 42mm and is available in polished stainless steel for the white and blue models and black PVD-coated steel for the black dial. A relatively simple 3-part case with sealed caseback, straight lugs and a thin bezel, the true protagonist of the watch is the dial. A track on the periphery of the dial indicates the all-important minutes and is read with a silver-coloured hand extending from the centre of the dial. The hours, placed in the larger sub-dial below 12 o’clock, feature three very “designer” Roman numerals at XII, III and IX and are also indicated with a silver hand. Unlike the two other models in the Excellence Regulator family, the sub-dials do not touch and the smaller running seconds is separated from the hours and sits in the lower half of the dial. The vertical axis formed by position of the three polished nickel hands, equidistantly separated and diminishing in size according to their functionality (m, h, s), provides a strong sense of symmetry and order. 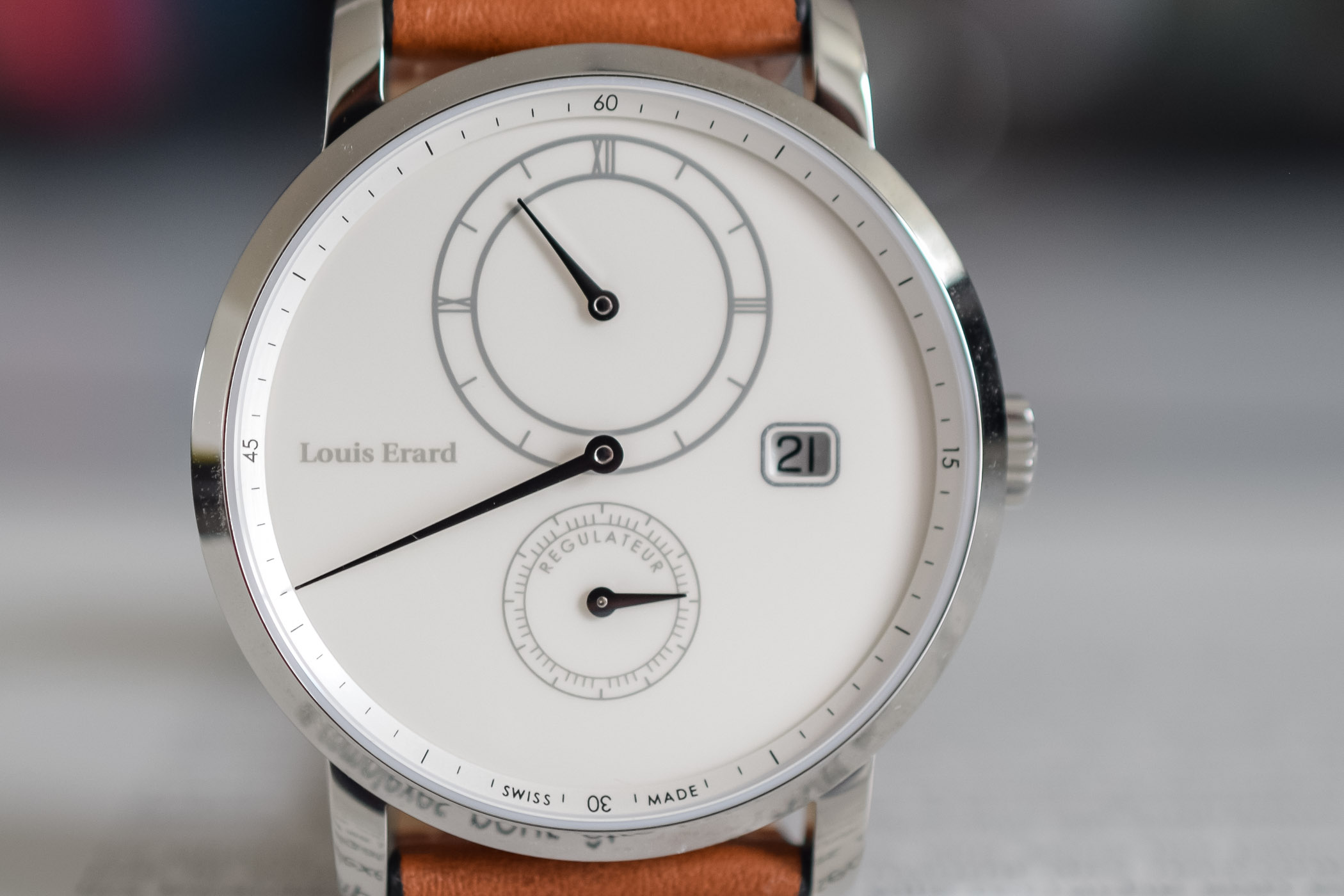 The words Regulateur are printed in the interior of the small seconds counter and the brand name Louis Erard appears on the left, at 9 o’clock, visually compensating the presence of a date window at 3 o’clock. The silver frame of the rounded date window matches all the other silver markings on the black and blue models. The ivory white dial features the same silver frame on the date window but the sub-dials and inscriptions are a pale shade of grey. To enhance legibility, the date window is covered with anti-reflective magnifying glass. The Excellence Regulator runs on an automatic Sellita SW200-1 calibre with a Dubois Depraz 14072 complication. With a frequency of 28,800vph or 4Hz, the movement can keep the hours, minutes, seconds and date functions running for approximately 38 hours. This movement, well-known and easily serviceable, allows keeping the price relatively restrained and to provide accuracy and reliability.

You can really feel the hand of its maker and the contemporary design language of this piece. In Eric Giroud’s hands, a classic regulator layout suddenly becomes contemporary and engaging. I have to admit that when I first saw it I thought it was an upside-down Jaquet Droz Grande Seconde and the sub-dials reminded me of Ressence watches. But this is all mentioned in the most complimentary fashion. Personally, the ivory white dial takes the cake. Its calm minimalism and elegant composition emit a serene Zen vibe. The date window, well, as always a questionable choice, especially in this refined low-key setting. All three models are limited editions of 178 pieces and come with matching leather straps and folding clasps. According to the brand, the symbolism of the number 178, which means “strong together” represents the partnership with Eric Giroud. Retail price for the steel versions is CHF 2,700 and CHF 2,800 for the black PVD model. More details at montres-louiserard.ch.